Bryndzové Halušky are Slovakia's national dish - pillowy little potato dumplings covered in a favourite Slovak cheese and lots of bacon. Pure comfort food, mac & cheese style. The dumplings are quick and easy to make in your kitchen with a few simple adaptations and taste great made with feta instead of the traditional bryndza cheese. 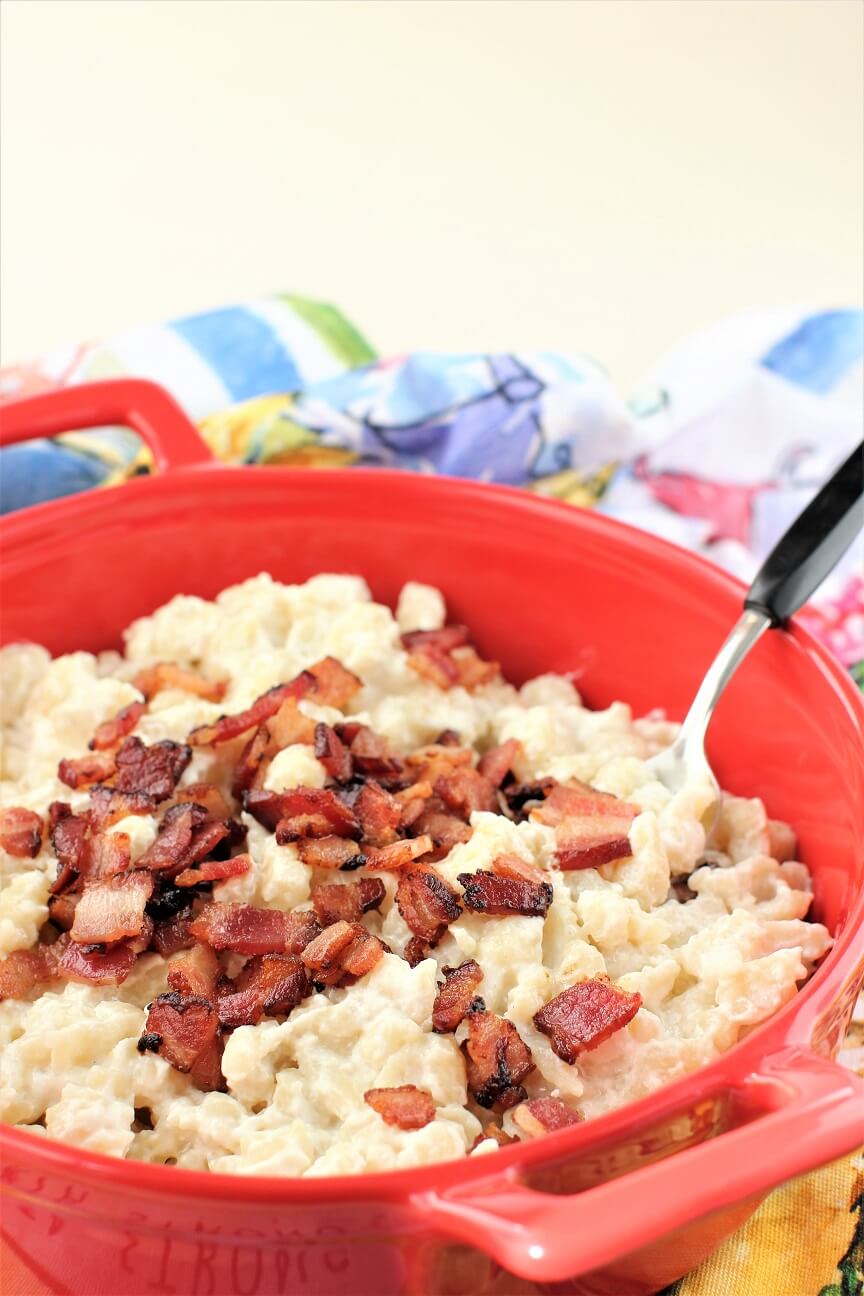 This month for our Eat the World recipe challenge, we're travelling to a part of the world that is in all of our hearts right now. The little landlocked country of Slovakia (officially the Slovak Republic) in the center of Europe is bordered by Ukraine, Poland, Hungary, Austria, and the Czech Republic. Slovakia boasts some of the most stunning scenery in all of Europe, and contains the highest number of castles and chateaux per capita in the whole world. Those facts alone make me want to add this country to my bucket list of places to visit.

The cuisine of Slovakia is simple, tasty, and hearty. Staple foods consist of smoked meats, pork, poultry, and some beef and wild meat, cheese, potatoes, and flour, flavoured simply with herbs. Slovakia's national dish is considered to be bryndzové halušky, originating in the northern regions of the country. This comforting meal consists of small soft, chewy potato dumplings coated in bryndza, a fermented fresh sheep cheese, and topped with fried bacon pieces.

I am so happy to have learned this dish. Any type of noodle or dumpling is popular in our family. Halušky are a cross between German spätzle and Italian gnocchi and can be made using a spätzle maker. However, I've found that a round-holed barbecue grill pan makes a great substitute if you don't own one. Failing that, you can just scoop out small spoonfuls of the dough into the boiling water. These pillowy little dumplings are delightful - tender and slightly chewy. Halušky are a perfect vehicle for all kinds of sauces or just served plain as a noodle side dish. They work equally well with a good gluten free flour blend - a real plus. Served as they are in Slovakia, they become the Eastern European version of the beloved mac & cheese combo. Plus - bacon! So simple but addictively delicious. No wonder it's hailed as the country's national dish.

You Can Make Bryndzové Halušky in Your Own Kitchen

The halušky are quick and easy. Just grate up a potato using the smallest holes of a box grater, the rough side, or you can even grind the potatoes in a food processor to a rough purée. 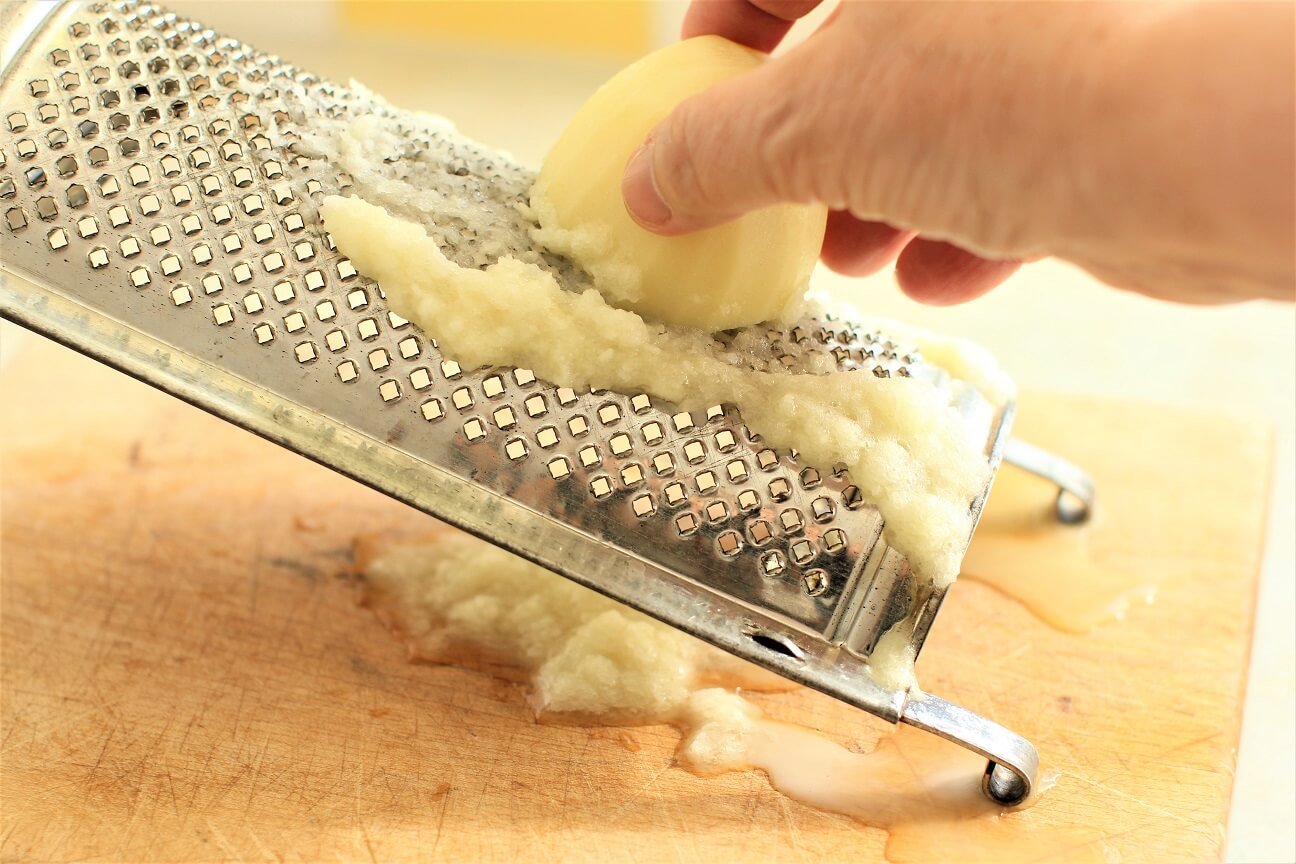 Combine the grated potato with flour, an egg, salt, and a splash of water. 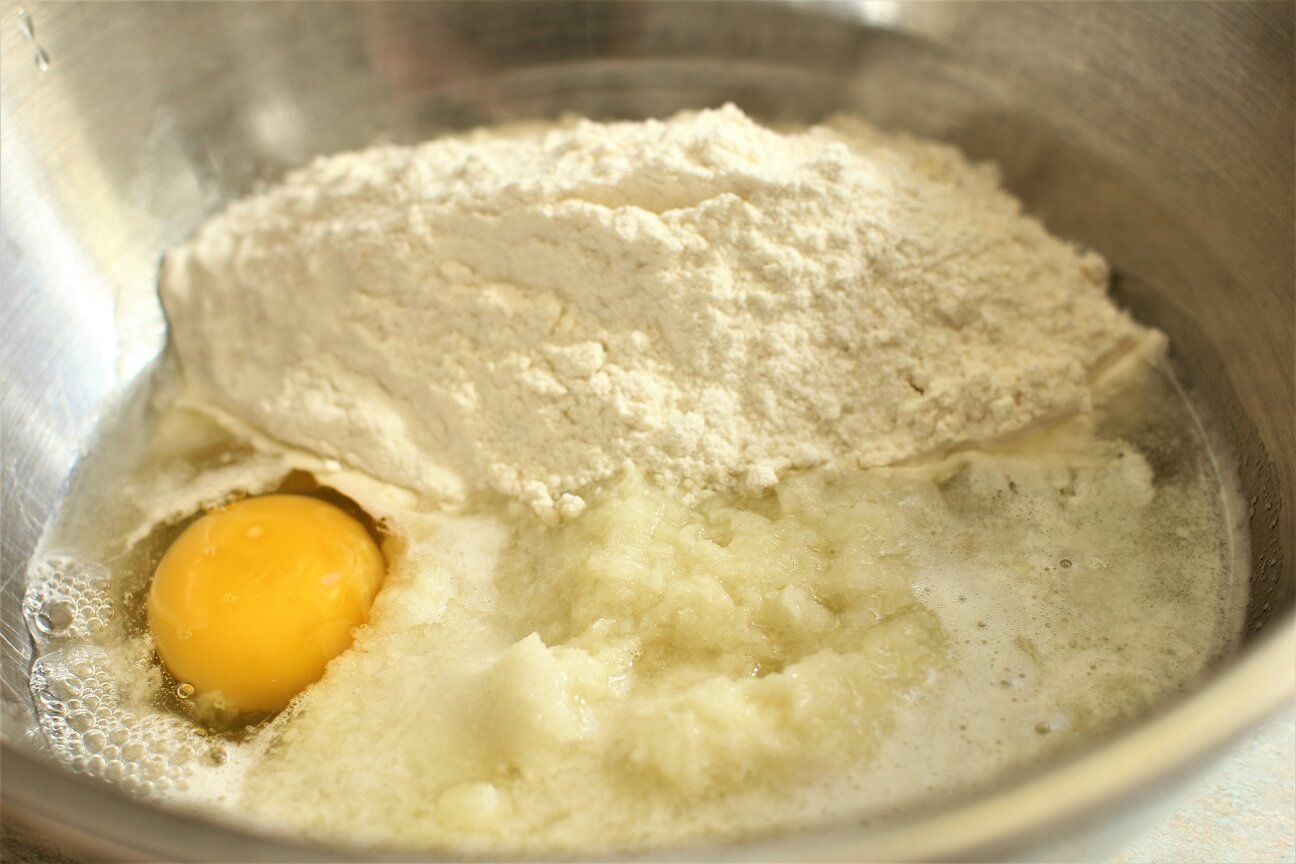 Stir it up to make a loose dough. 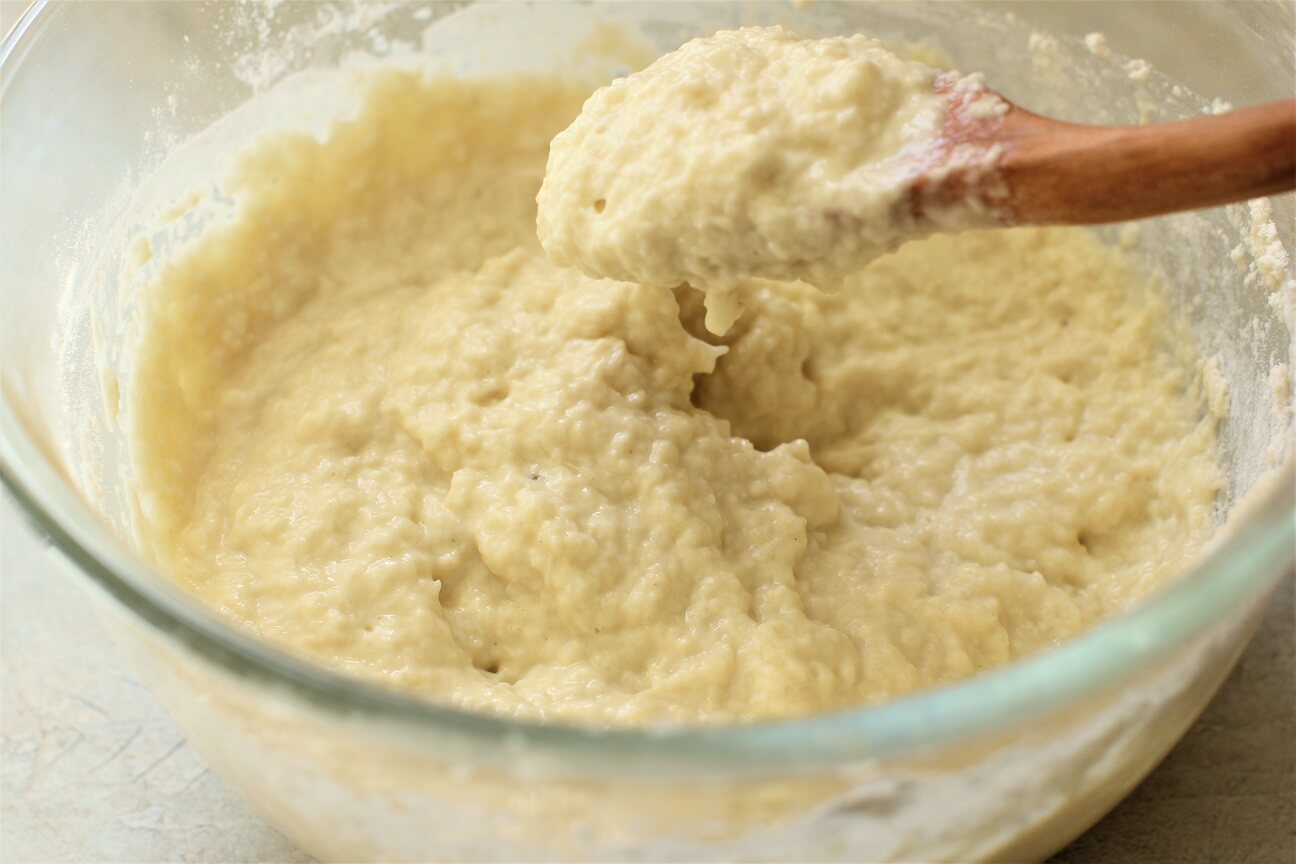 Push the dough over the holes in a spätzle maker set over a pot of simmering water using a flexible spatula. 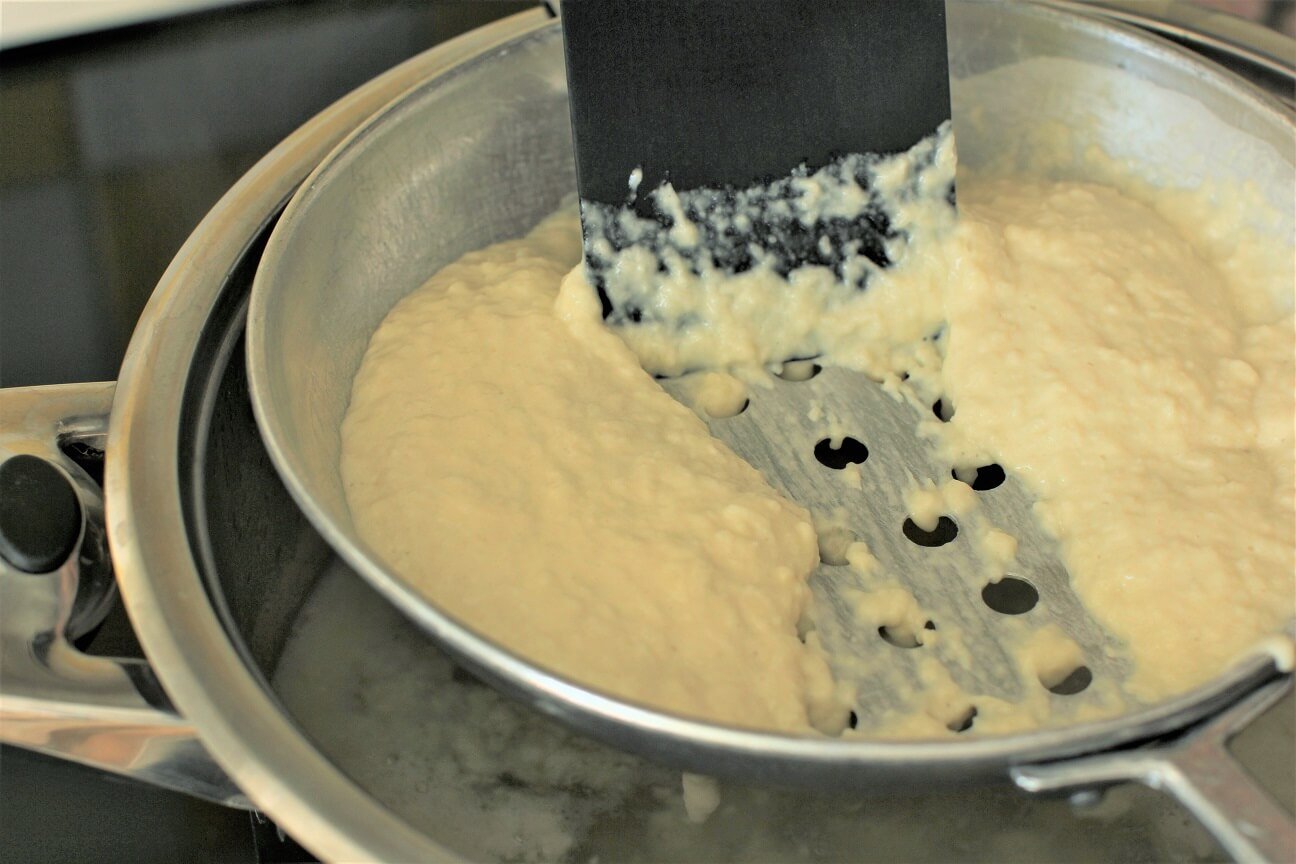 But don't worry if you don't have a spätzle maker - you can use a barbecue grill basket that has large round holes in it, like this one in the photo, or you can just scoop small spoonfuls of the dough into the water instead (your halušky will be a bit larger, but just as tasty).

Then strain the little dumplings in a colander. 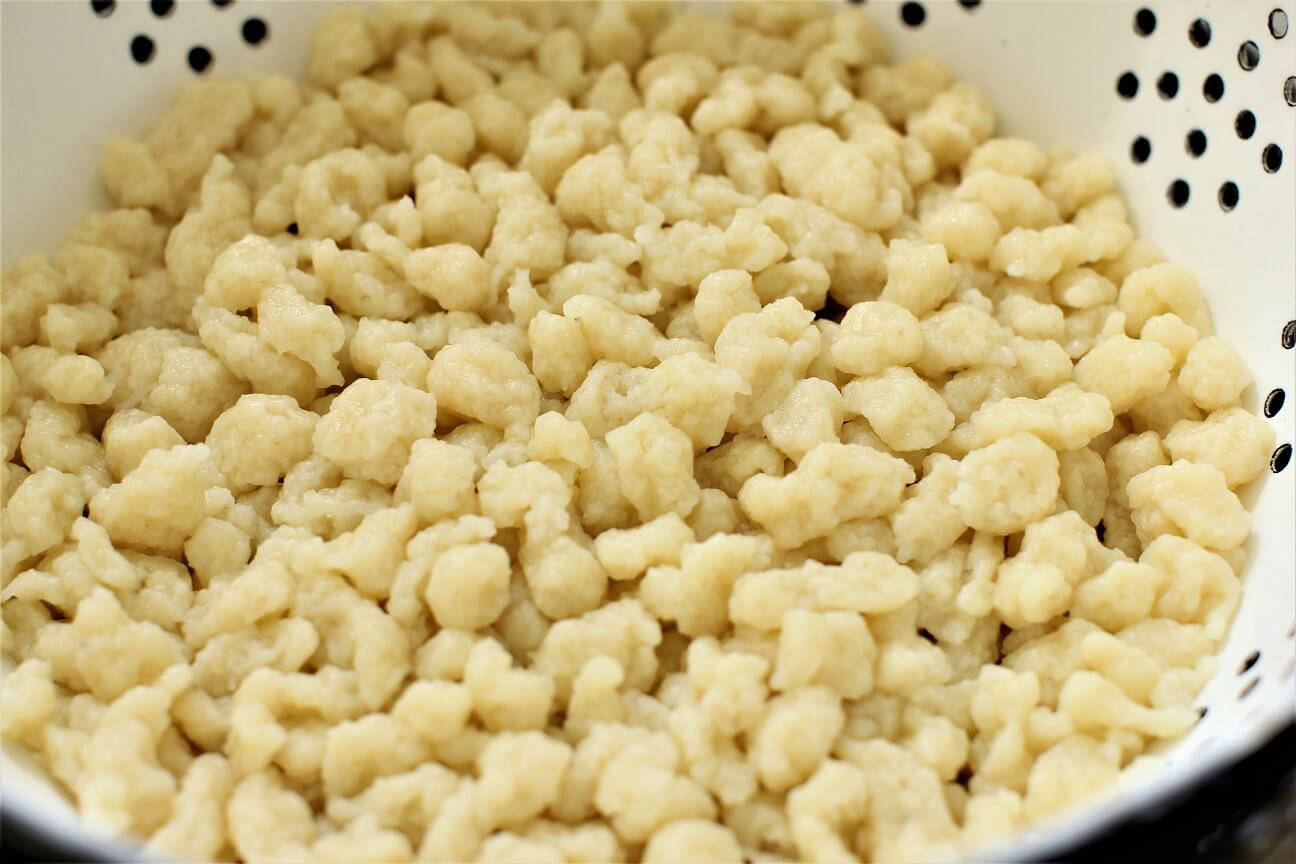 And toss them with the cheese. Mashing together feta cheese with a bit of cream is a close substitute for the Slovak bryndza cheese. And of course, top them with lots of crisp-chewy bacon for the final touch. 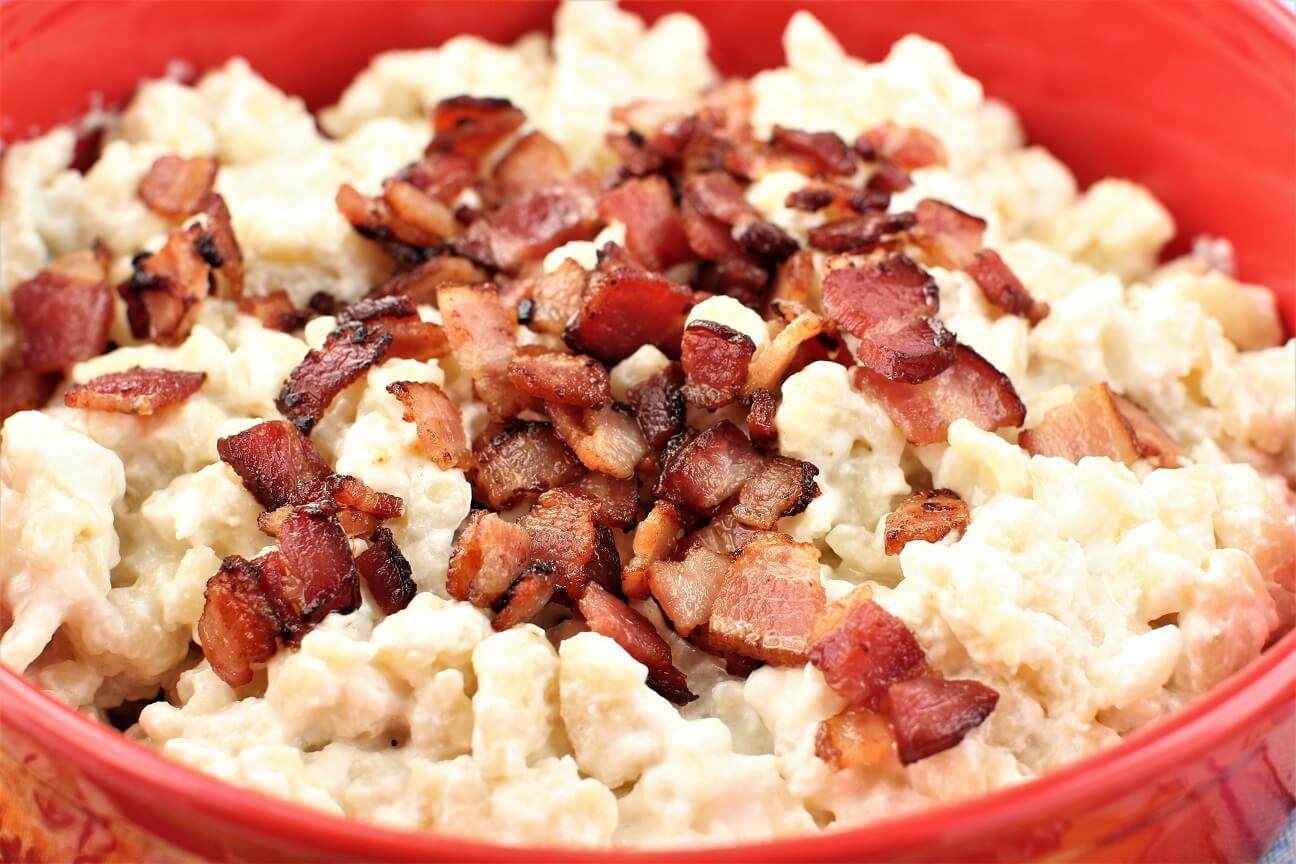 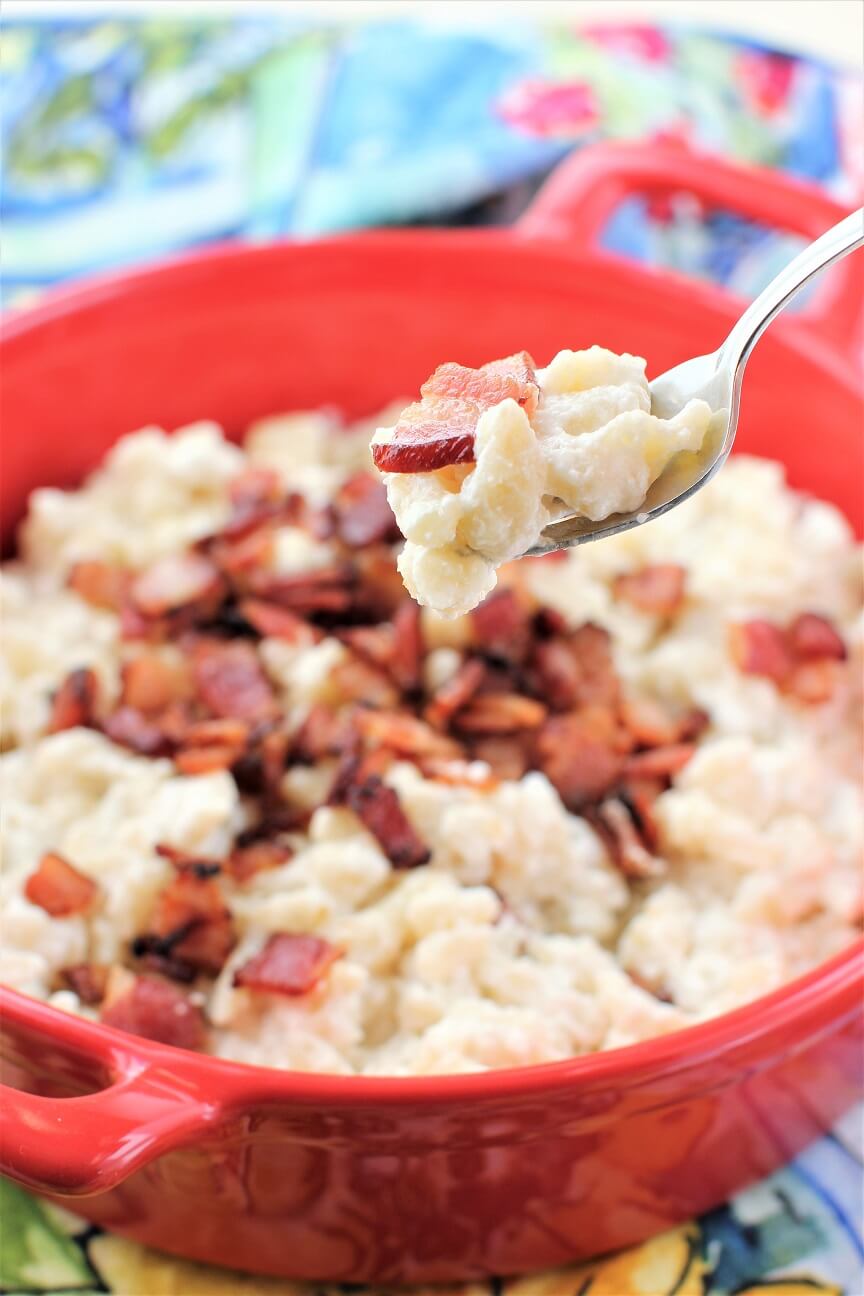 Chewy, soft, cheesey, bacony. What more could you want? 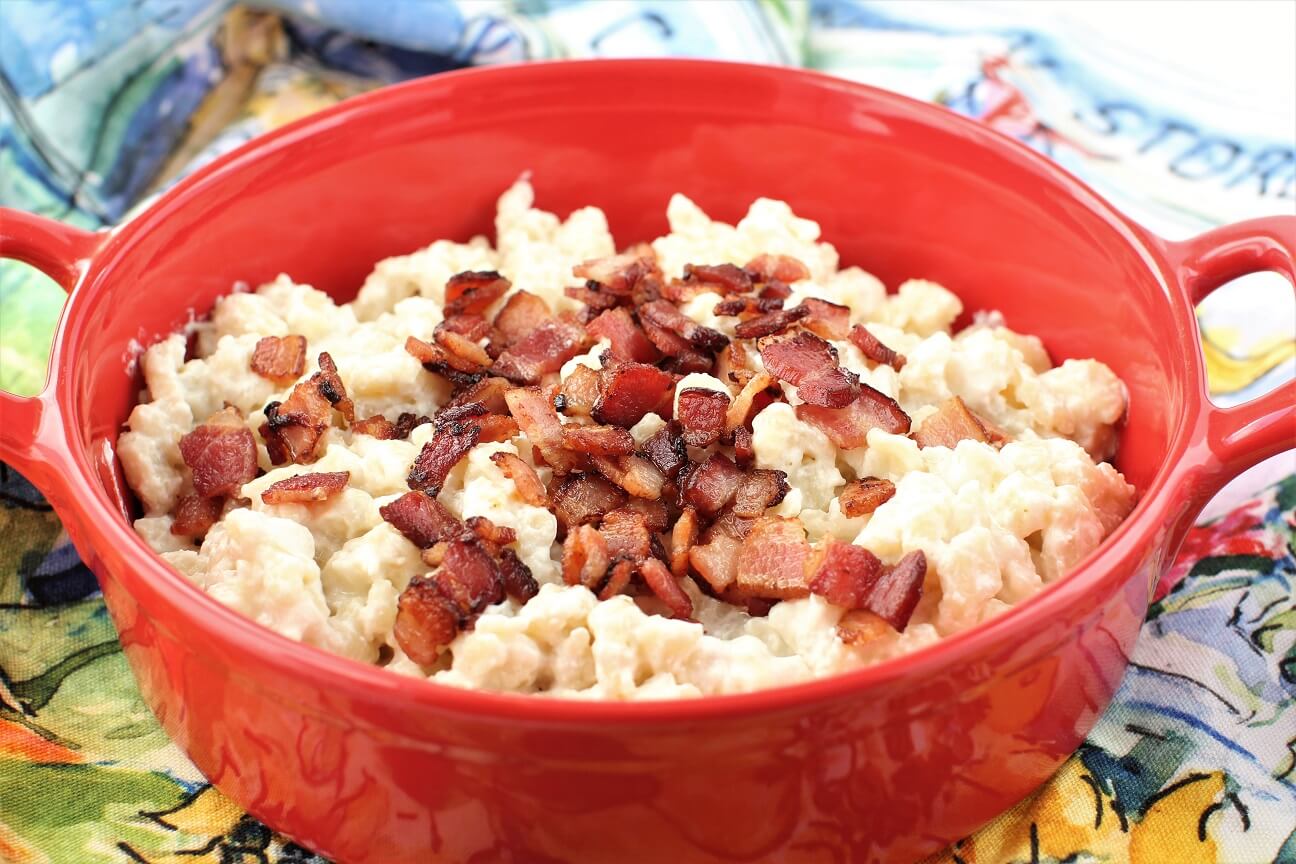 Check out all the wonderful Slovak dishes prepared by fellow Eat the World members and share with #eattheworld. Click here to find out how to join and have fun exploring a country a month in the kitchen with us! 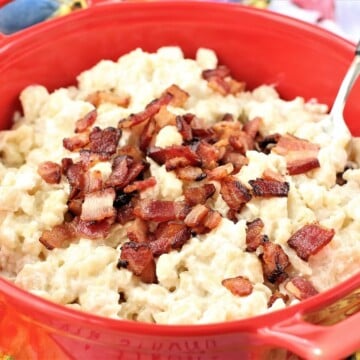 Margaret Bose Johnson
Bryndzové Halušky are Slovakia's national dish - pillowy little potato dumplings covered in a favourite Slovak cheese and lots of bacon. Pure comfort food, mac & cheese style. The dumplings are quick and easy to make in your kitchen with a few simple adaptations and taste great made with feta instead of the traditional bryndza cheese.
No ratings yet
Print Recipe Save for Later
Course Main Course, Side Dish
Cuisine Slovakia
Servings 2 (2 - 3)

This is the gluten free flour blend I use, and it works great in this recipe. Traditionally bryndza cheese would be used when making bryndzové halušky, but since it's not readily available outside of Slovakia, sheep feta cheese mashed with a bit of cream is a good substitute. Getting the consistency of the dough right may take a bit of playing around. You don't want it to be too thin, or the halušky can fall apart when boiled. A muffin dough is a good texture to aim for. It will really depend on how watery your potatoes are. Russet potatoes are less watery, so make it easier to get the right consistency. The dough has to be soft enough to easily press through the holes of the Spätzle maker or grill pan, but stiff enough to hold together. Add a bit more water if it's too thick or a bit more flour if it's too thin. Once you've made the halušky a couple times, you'll know how the dough should look. But don't worry, because you do actually have quite a bit of leeway in texture and the dumplings will still turn out beautifully. While you've got all the equipment out and dirtied, I recommend making extra halušky, as they freeze well. See instructions at the end of the recipe.
Tried this recipe?Let us know how it was! 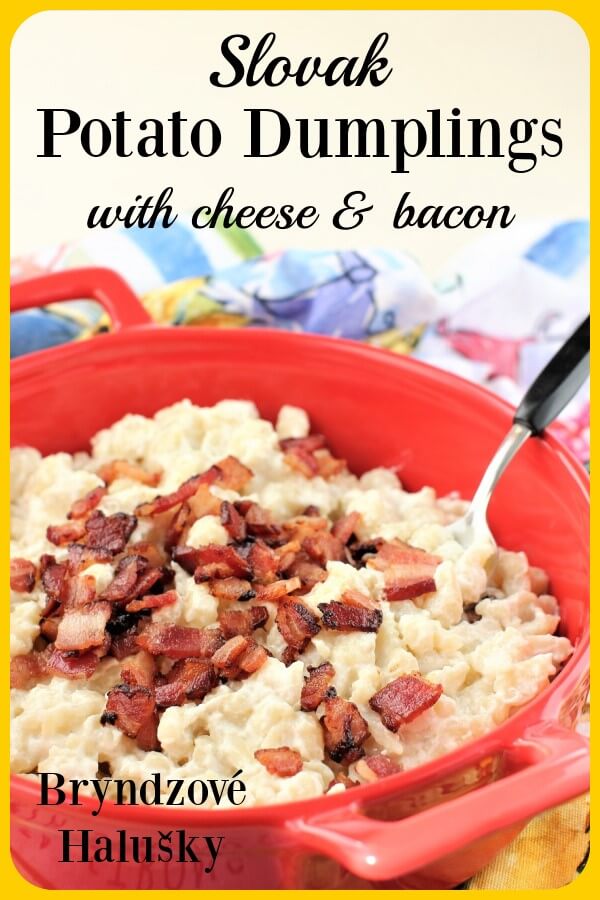