Celebrate St. Patrick's Day with this traditional taste of Ireland. Dublin Coddle is a homey dish made of just a few simple ingredients that, when braised long and slow, meld together to become a delicious, comforting stew. Bacon, sausages, potato, and onion - what more can I say? (Skip to recipe.) 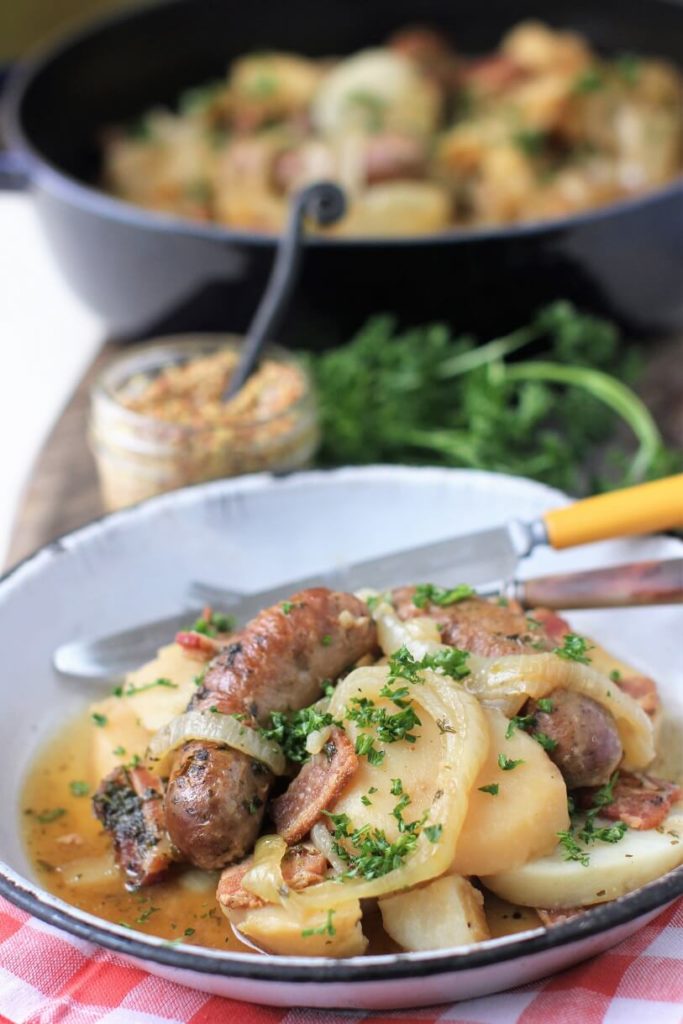 St. Patrick's Day is just the excuse you need to cook up a comforting pot of Dublin Coddle. After that, you'll want to make it whenever it's a little bit miserable outside and you want a big plate of something so deliciously simple and tasty you can forget about the weather. This slowly simmered pot of comfort food will warm the cockles of your heart, whether it's an Irish heart or not.

The origins of Dublin Coddle are (surprise, surprise) - Dublin. It's a dish that dates back at least to the eighteenth century, and was traditionally cooked to use up leftover sausages or rashers (bacon) from the week, before going meatless on Fridays. Leeks and oatmeal were originally used, but nowadays, potatoes and onion are most popular. The name most likely comes from the older word caudle which means 'to boil gently or stew'. 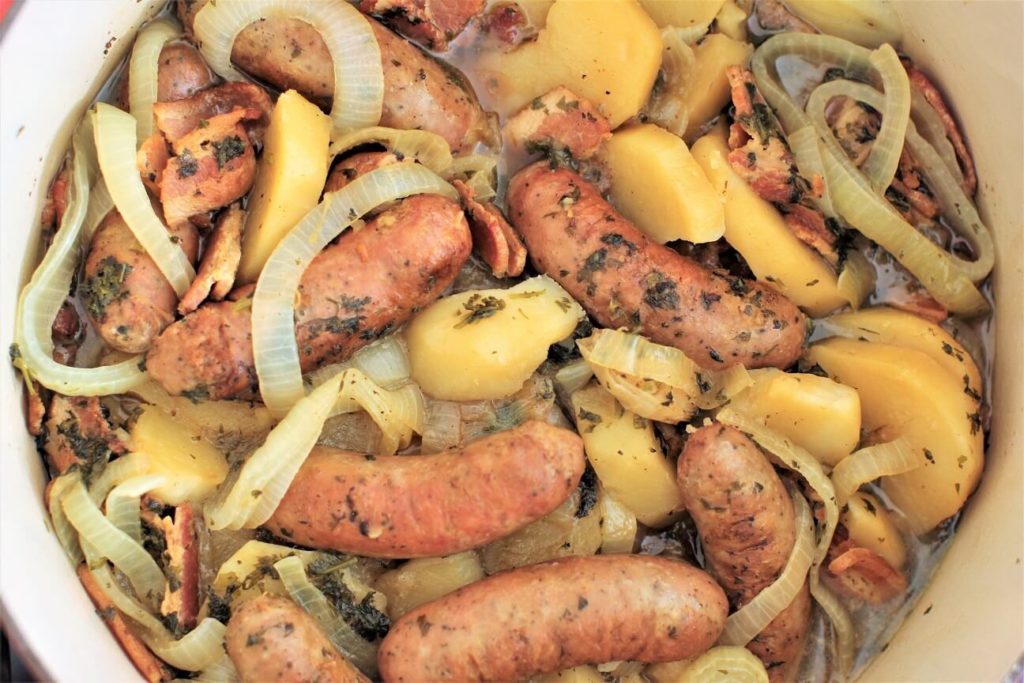 Dublin Coddle is a beautiful stew, brilliant in its simplicity; 5 ingredients that gently simmer together to become a fantastic, rich, flavourful dish. Meat and potatoes in a beautiful marriage (because, of course . . . that dashing groomsman . . . bacon!) The beauty of this stew is that it doesn't suffer from being kept warm for hours. Historically, busy cooks could braise up a cauldron of Dublin Coddle in the morning, then leave it to warm gently in the oven if they needed to be out of the house for the afternoon, and it was meltingly delicious and ready for the evening meal. It is said to have been the favourite meal of Irish authors Seán O'Casey and Jonathan Swift (Gulliver's Travels).

Digging around on the internet brought up a bit of information on this simple stew. It seems to be more of a city dish, possibly because its counterpart, Irish Stew, was made with mutton which was more available in the countryside, while in the city of Dublin, bangers and other sausages were more available and affordable. So, even though it's a working man's dish, homey and common, it's a bit more 'posh' than Irish Stew. 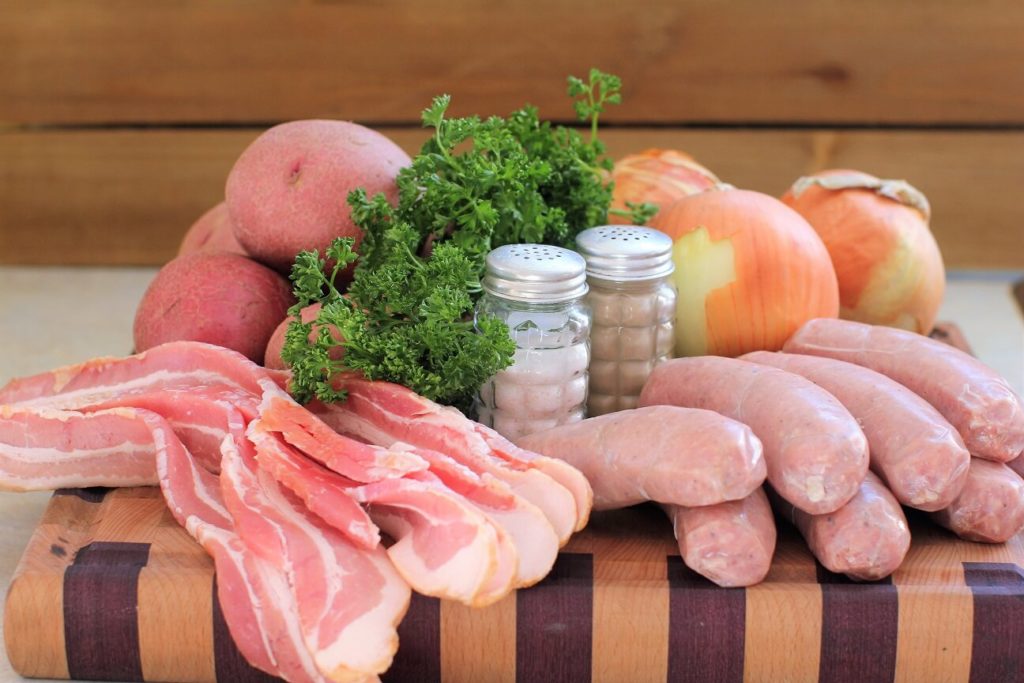 You'll find all kinds of variations online, with added vegetables, herbs, and prepared broths. But if you want to stick to the original, just use these simple ingredients, with water as your liquid. Traditionally, the bacon and sausages are parboiled in water, and the resulting broth is used as the liquid for the stew, which seems redundant. I took the liberty of saving a step and just adding the water directly to the stew. I also browned the bacon first, because the idea of boiled bacon just didn't turn me on at all. The extra step of browning the bacon and sausage makes for a more beautiful-looking and deeply flavoured stew. I did make up one test batch of the stew the traditional way, not browning the sausages (I used ham instead of bacon). It was paler in colour and flavour, but was still very tasty. So if you're in a rush, you can save a step and still have a decent dinner. 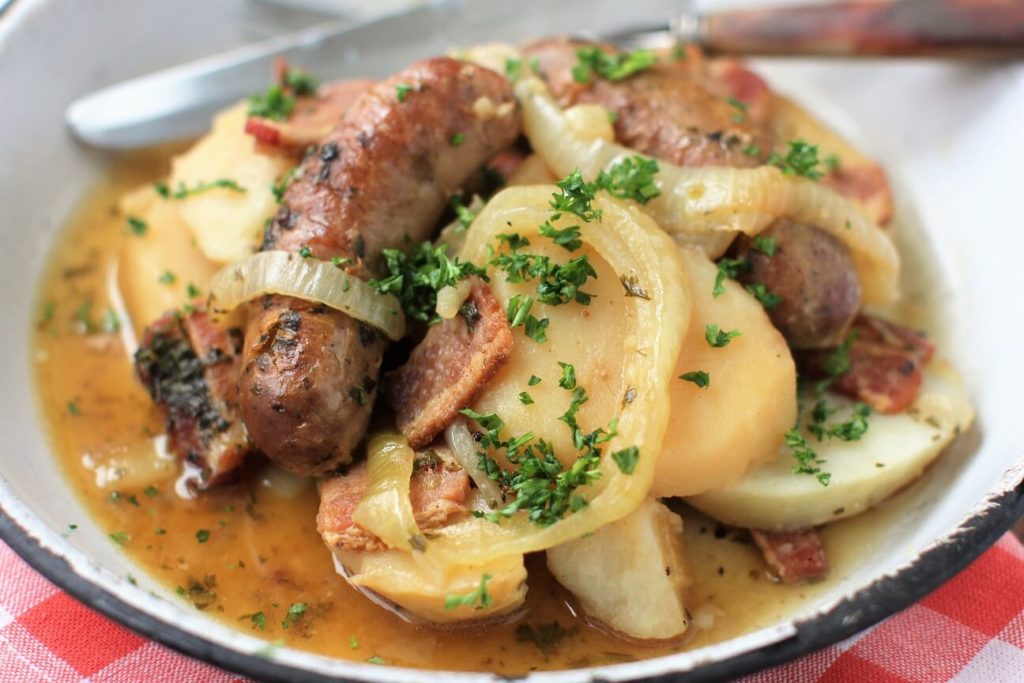 Serve your Dublin Coddle with a hunk of rustic bread, like my gluten free Irish Soda Bread to sop up the juices and a pint of Guiness or a crisp hard apple cider ( a delicious gluten-free option) to wash it down. For a peek at my trip to Ireland a few years ago, where I managed to be in Dublin for St. Patrick's Day (so exciting), click on this link, and for another great St. Paddy's day recipe and story, check out this Green Soup.

If you can't make it to Ireland to experience the revelry and blarney of a true St. Patrick's Day celebration, grab yourself a knife and fork and tuck into a plate of Dublin Cobble instead. Sip a pint of your favourite brew and pretend you're in an Irish pub, trading stories with the locals while a fiddler plays a jig in the background.

I've joined a group of bloggers, led by the intrepid Evelyne of CulturEatz, who will be showcasing a recipe from a different country around the world each month (#eattheworld). This month's country is, fittingly, Ireland. I am so excited about this project and can't wait to 'Eat the World' and discover all kinds of new international recipes! I had so much fun thinking of which recipe to post to showcase Ireland. Check below, after the recipe, to see what other Irish delights have been cooked up by my fellow bloggers on this exciting project. And check back on the 10th of every month to see what country we'll be eating in next.

Kitchen Frau Notes: The traditional way to make Dublin Coddle is to combine everything in the pot without browning the bacon or sausages. This saves time and an extra step. However, it doesn't look quite as visually appealing and doesn't have the full depth of flavour that comes from browning the meat. Bacon doesn't look very appetizing when boiled, so I prefer using ham instead of bacon when doing it this way. If you're short on time or don't want the grease spatter that comes from browning bacon and sausages, just layer everything in the Dutch oven, bring to a boil, cover, and simmer on the stovetop or in the oven for the recommended time. You'll be eating your Dublin Coddle like they did in olden times. 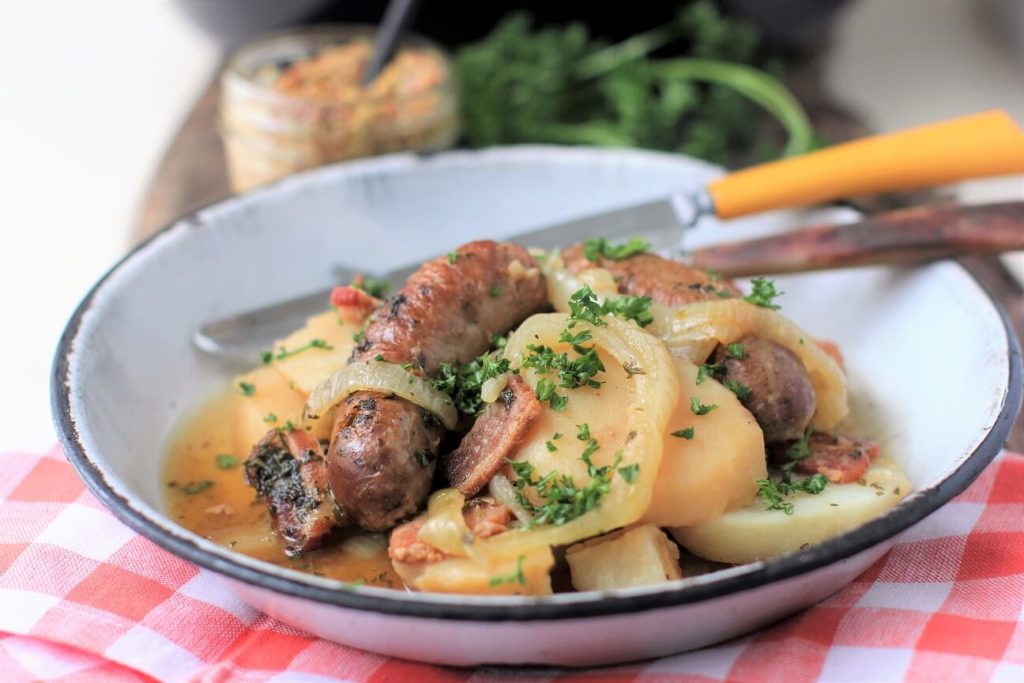 Cut the bacon into 1½ inch (3cm) pieces and  partially cook them over medium heat in a large Dutch oven, until they start to turn golden, but are not crispy. Scoop them out and set them aside. Keep the bacon fat in the pan. Brown the sausages in the fat.  The sausages don't need to be fully cooked as they will finish cooking during the simmering time. Do not drain the fat.

*If using smoked sausages, you can brown the bacon, but just cut the sausages into manageable lengths and add them without browning.

Pour on the water. Bring to a boil, then reduce the heat to a simmer. Cover the pot with a piece of tin foil that is bigger than the top of the pot. Put on the lid of the pot and press it down to make a tight seal over the tin foil, with the edges of the tin foil sticking out all the way around the pot. You can finish braising the stew in two ways:

1. Simmer the Dublin Coddle on the stovetop for 1 - 1½ hours. The stew is done after one hour of simmering, but can easily handle up to 2 hours. I like it after about 1½ hours.If there is too much liquid, remove the lid after 1 hour and simmer until the liquid is reduced somewhat.

2. Bake in a 300°F/150°C oven for 3 hours, checking halfway and adding more water if the liquid level has dropped lower than 1 inch deep. If you need to keep the stew in the oven for longer, it can easily handle braising for up to 4 or 5 hours, as long as the liquid level is sufficient.

Taste, and add more salt and pepper if it needs it. Serve with grainy mustard on the side and a nice crusty bread to mop up the broth.

Serves 4 to 6, depending on the size of the appetites.

Check out all the wonderful Irish dishes prepared by fellow Eat the World members and share with #eattheworld. Click here to find out how to join: