All the deliciousness of a creamy rhubarb custard pie without any crust-fussing. This simple blender recipe forms its own crust on the bottom, with a delicate custard layer in the middle and a tangy rhubarb layer on top . . . and it only takes 10 minutes to get this pie into the oven! (The gluten-free version works wonderfully, too.) 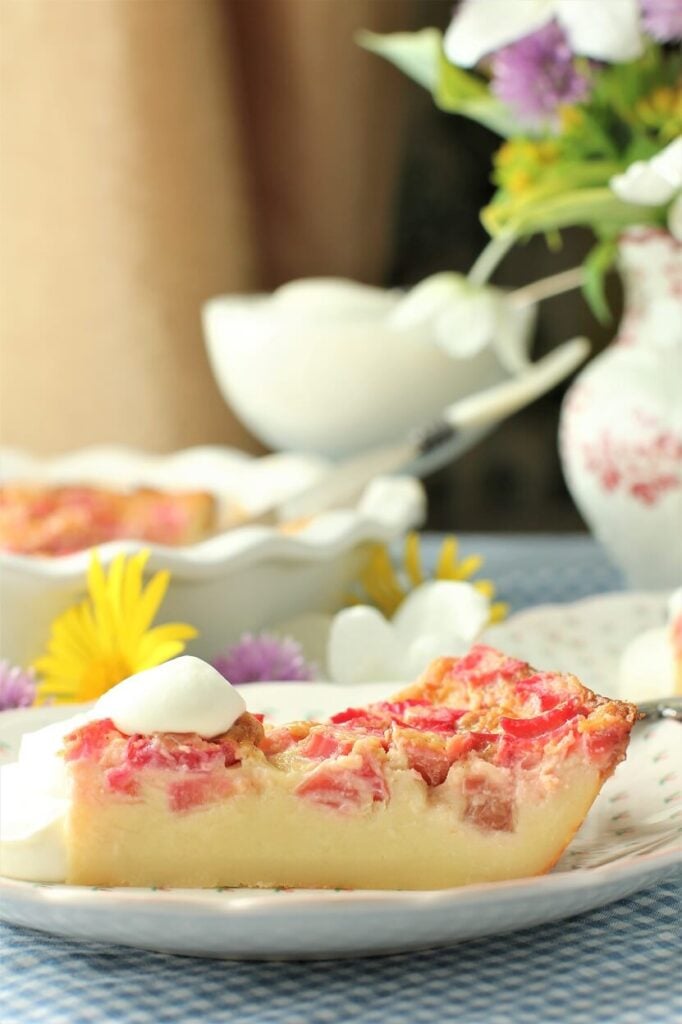 It's kitchen magic! You pop a few ingredients into the blender, pour it over a pie pan filled with sliced rhubarb, bake it, and voilà, you've got an amazing custard pie. There are three glorious layers - a slightly firmer bottom layer, a middle layer of creamy, silky vanilla custard sweetened with a delicate whiff of nutmeg, and a lot of tangy, fruity rhubarb rubbling the top with its glorious pinkness. This is my kinda pie, and will quickly become yours, too, for those times when you want to impress but have no time.

Who remembers being a kid and walking barefoot around the yard, holding a little cup of sugar in one hand and a big stalk of rhubarb in the other? Dipping the rhubarb into the sugar and crunching on the juicy stalk while your cheeks puckered and your eyes crossed from the intense sourness was one of childhood's summer pleasures. We'd dare each other to see who could eat it while keeping a straight face! Now you can enjoy that same delightful taste sensation in a piece of pie - and it's a lot less pucker-inducing. In fact, it's absolutely, sweetly delicious. 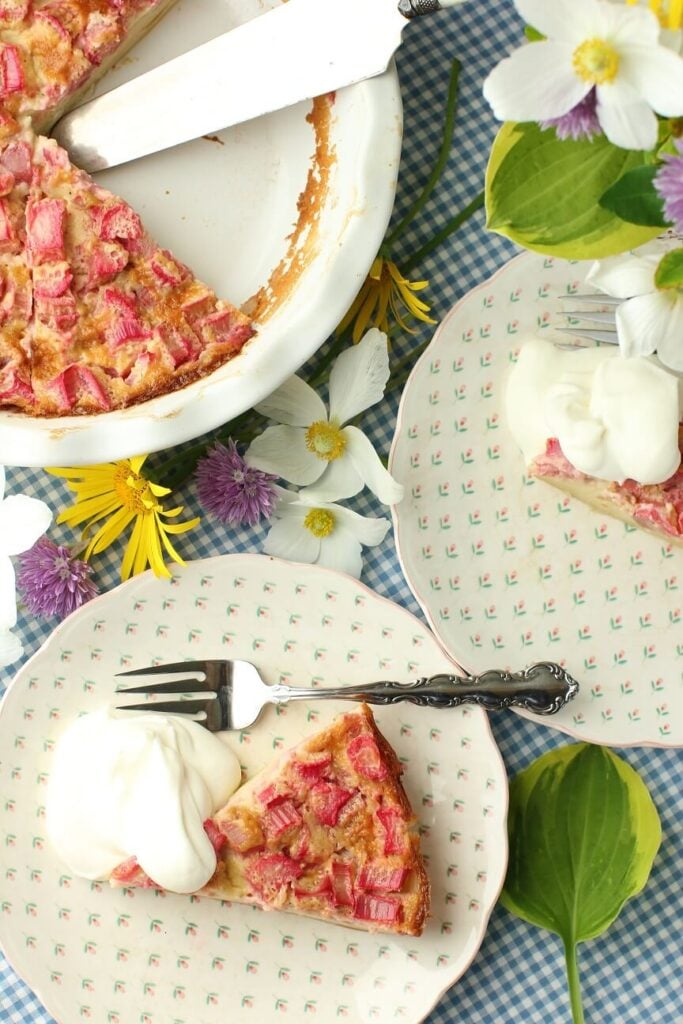 The Rhubarb is Growing - Come Look at the Garden

We had a short, delayed spring, but somehow over the last two weeks it became summer! It's been cloudy and cool, and winter seemed to drag on forever. We got into the garden late this year, squeezing the seeding in between rainy spells. But as usual, with our long northern days of extended sunlight hours, everything popped up somehow (along with the weeds) and suddenly we're gardening again!

The rhubarb plants have become monsters almost overnight. The giant variety we have gets to about 5 feet tall (1.5 metres) every year. I've already removed an armful of flowering stalks from it. The regular variety, in front of the giant plant in the photo below, has redder stalks, and that's the one I use for pie. The giant variety is amazing for juice and cordial, its thick stalks are crisp and juicy. You can see we've started a new row of smaller rhubarb plants to the left of the mature rhubarb. Once the new row is established, we'll remove the big old plants so we have more space between the rhubarb and the new rows of raspberries we've started in our orchard garden. 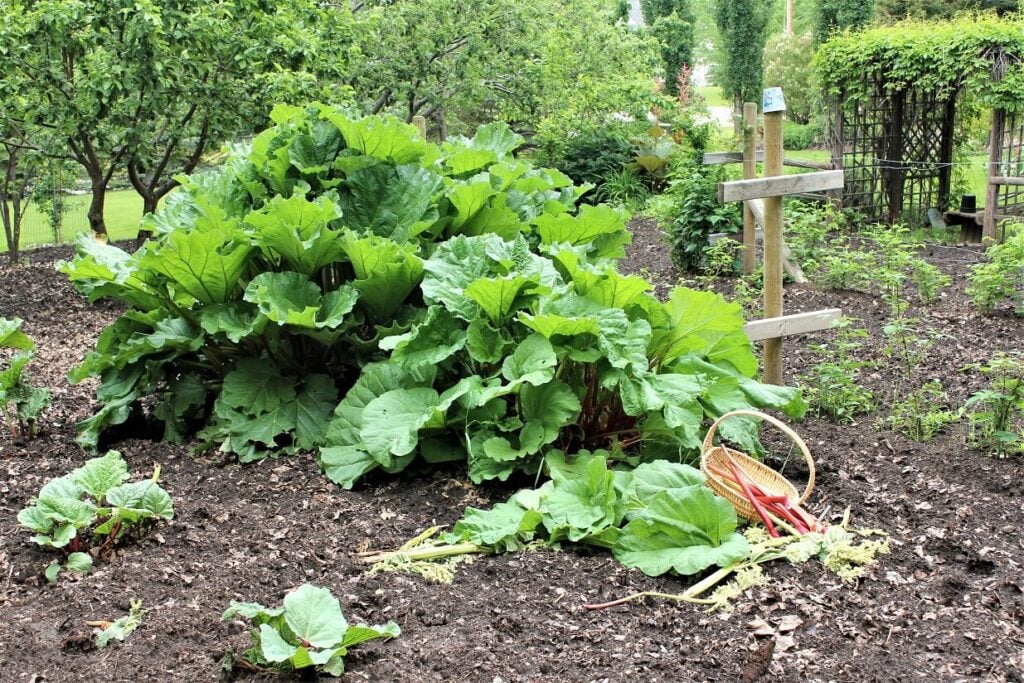 Two weeks ago we planted most of our vegetable garden. My mom was an energetic helper - she's 85 years young, and I can  hardly keep up with her!

In the last few years deer have become a persistent problem in our garden - those pesky unwanted guests would regularly come and greedily help themselves to whatever delicacies they liked from our garden buffet. It was infuriating! I'd wake up every morning to go look at the garden with dread, wondering which rows they'd destroyed the night before. We had tried everything - covering the rows with tunnels of stucco wire (they ate through the holes). Hanging bars of scented soaps from poles every few feet around the perimeter of the garden (they seemed to love the smell), sprinkling a border of shaved soap around the outside of the garden (ditto), sprinkling blood meal and hair clippings everywhere (no luck, the deer just seemed to thumb their noses at our foolishness). So last year we put up a fence of fine-meshed deer netting about 5 feet tall - they still jumped over it! It wasn't until we added an extension of a string that was one foot higher (total of 6 feet/2 metres high) that they finally gave up, moved on, and found a new restaurant to frequent. You can see the new extension with the pink flagging hanging from it - just want to make sure the deer can see it and decide to stay out for good! We're sticking with the temporary fence for now, so that we can take it down every winter and our friend Ed can come in with his tractor to till the garden.

The herb bed along the south side of the greenhouse is lush and glorious already - the chives, garlic chives, tarragon, oregano, sorrel, and thyme come back every year. Sage lasts for 2 to 3 years, then dies out. I tuck annual herbs between the perennial ones every year - rosemary, lemon balm, marjoram, savory. Lovage has a permanent spot in the peony border. Chervil, mint, and camomile are in the pots to the left in the photo. In the garden, dill, cilantro, and borage self-seed all over the place and I leave them where they like to grow (though I only let a couple of borage plants stay), plus I seed parsley, basil, and purslane in the rows.

Last year I planted red orach from seeds given by a Swiss friend of mine. The plants grew as tall as me and I couldn't keep up with them. They seeded all over the place and now they're homesteading in our asparagus patch! This year I've been more intentional about using them - orach is a wonderful delicate heritage green that can be used just like spinach, both raw and cooked. Their purple leaves turn green once cooked. Very tasty! I'm planning to keep the plants under control this year, and am very happy with them as an addition to our garden. I've read that if you keep them pinched, they will be prolific providers of greens all season long!

The strawberry patch is looking promising - can hardly wait for the berries!

This is our garden now, two weeks later. We've started adding grass clippings for mulch along the pathways, the pea fence is up, the broccoli, cauliflower, and kale are thriving under their tunnels of shade cloth (to keep out those white butterlfies that turn into little green worms later on), and the weeds are coming up as quickly as the plants! I'll get out there to hoe them if these nightly rains finally stop. We've had lots of good moisture lately.

The chickens are happily scratching away in their coop. I know they'd like to be checking out the garden, but we have visits from neighbourhood dogs, so they're safer in their pen. 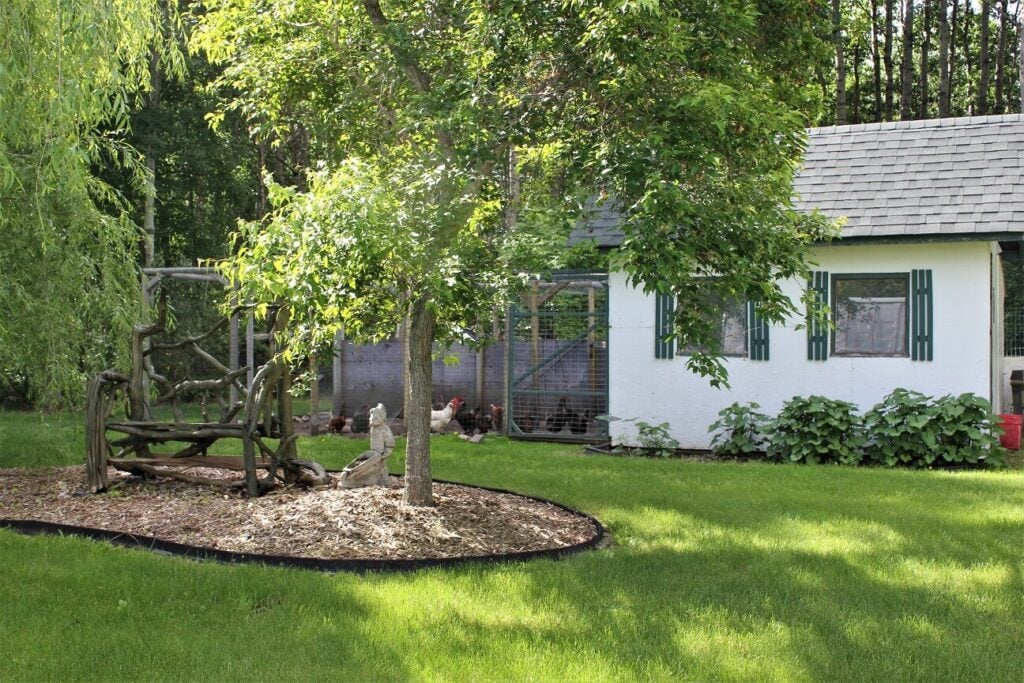 Back to the Amazing Crustless Rhubarb Custard Pie

Pink rhubarb makes the most pretty pie, but even if your rhubarb is mostly green in colour, the flavour will be just as fantastic. 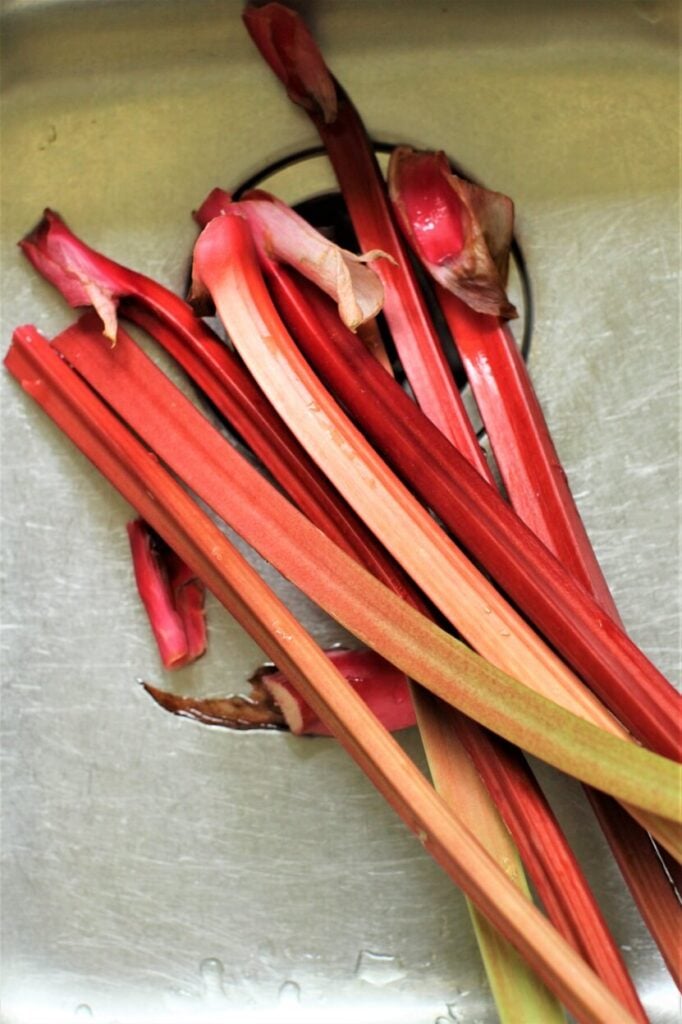 Once you have the rhubarb thinly sliced (thinner slices cook faster and spread out more evenly while baking), just pile it into a generously buttered pie pan. Then whiz up the custard ingredients in a blender and pour the liquid batter over the rhubarb. Tap any sticking-up pieces of rhubarb with a spoon so they are submerged and get coated with the batter. Then bake. 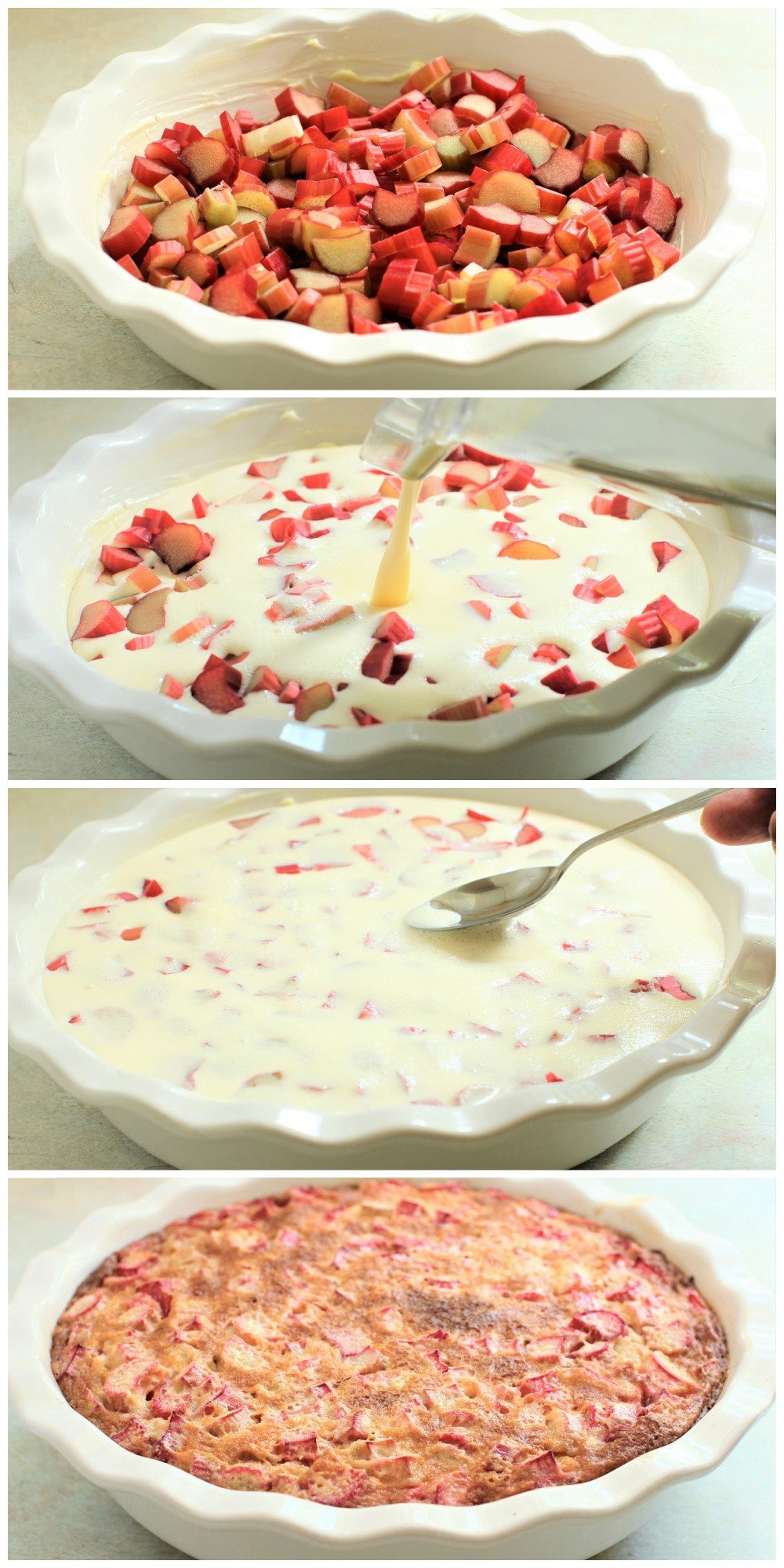 This rhubarb custard pie is part of the 'Impossible Pie' family - that magical confection that doesn't need a crust. While it's baking, the batter magically separates into three distinct layers. The flour sinks to the bottom to make a thicker, slightly firmer crust, and the center becomes a beautiful custard, lightly sweet and delicately creamy. Meanwhile, the rhubarb floats to the top to form a pink and nubbly layer of that characteristic rhubarb tanginess - the quintessential flavour of spring's first offering. 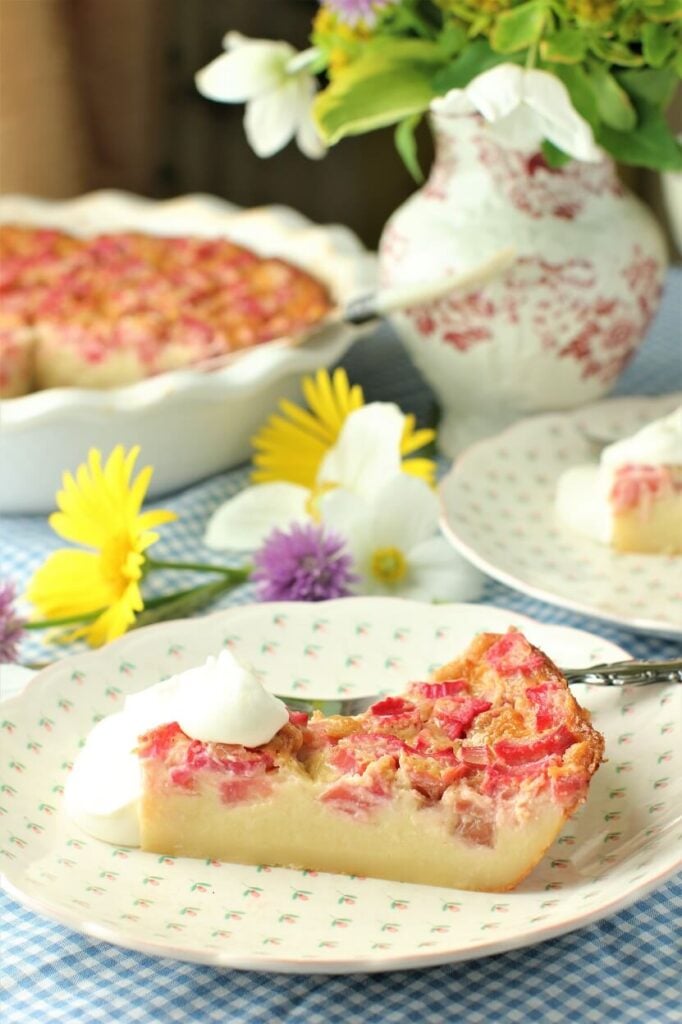 In less than 10 minutes you can have this pie in the oven. Who doesn't want that as summer comes on? More time to enjoy the sunshine and maybe pull a few weeds! 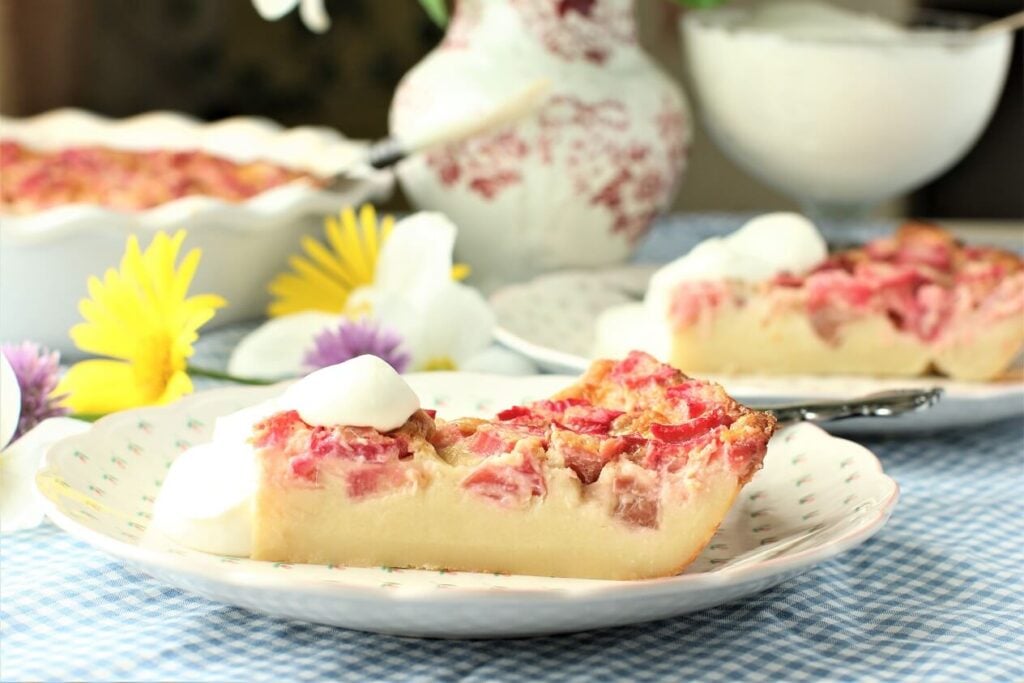 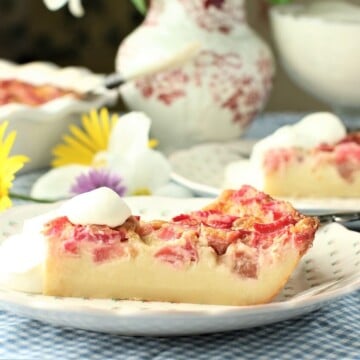 All the deliciousness of a creamy rhubarb custard pie without any of the crust-fussing. This simple blender recipe forms its own crust on the bottom, with a delicate custard layer in the middle and tangy rhubarb on top . . . only 10 minutes to get this amazing pie into the oven! (Gluten-free version, too.)
5 from 3 votes
Print Recipe Save for Later
Prep Time 10 mins
Cook Time 50 mins
Total Time 1 hr
Course Baking, Dessert, Pie
Cuisine American, Canadian
Servings 6

If you only have a regular (not deep-dish) 9-inch pie pan, you will have too much filling for the dish. Put some of the rhubarb and custard mixture into a separate small dish and bake it separately - the smaller dish will be done 10-15 minutes before the larger pie is done. If using unsalted butter, add ¼ teaspoon salt to the batter. If making the gluten-free version of this pie, you can use a full ½ cup of gluten free flour blend if you don't have white rice flour - you won't have a distinct layer of crust at the bottom, but the pie will still hold together beautifully. Using half gluten-free flour blend and half white rice flour produces the best result, making a nice thin crust layer at the bottom. (Don't use all white rice flour as it makes a very thick bottom layer.) The nutmeg is optional, but I recommend it - it adds a subtle complexity that really complements the rhubarb. Make a batch of stablized whipped cream and it will keep in the fridge to add to the pie whenever the urge to enjoy a piece strikes.
Keyword crustless pie, custard pie, garden, gluten free pie, pie,, pies, rhubarb, rhubarb pie, tart
Tried this recipe?Let us know how it was! 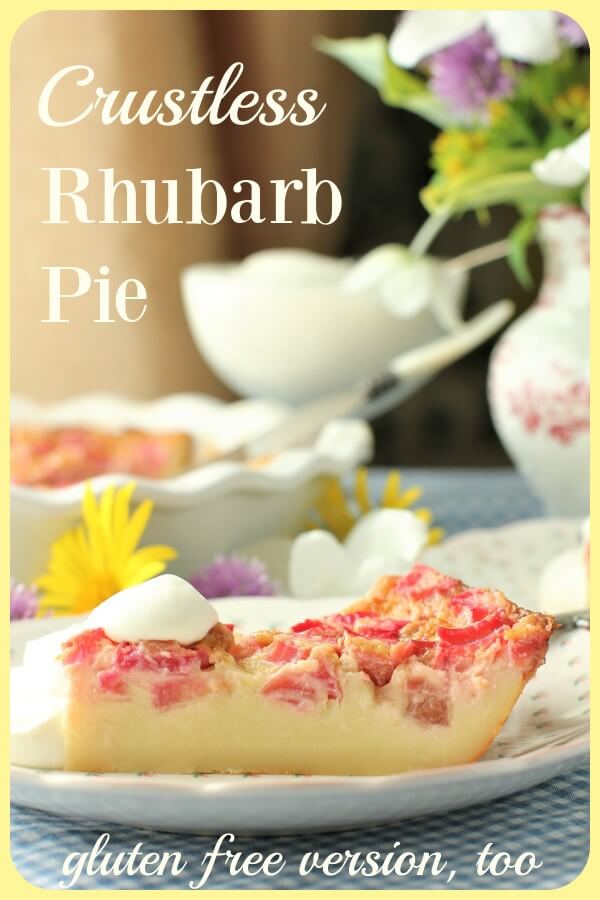