Pure comfort food, an apple or rhubarb crisp with tangy fruit on the bottom and a crunchy oat topping is a beloved old-fashioned dessert that never goes out of style. (Skip to recipe.) 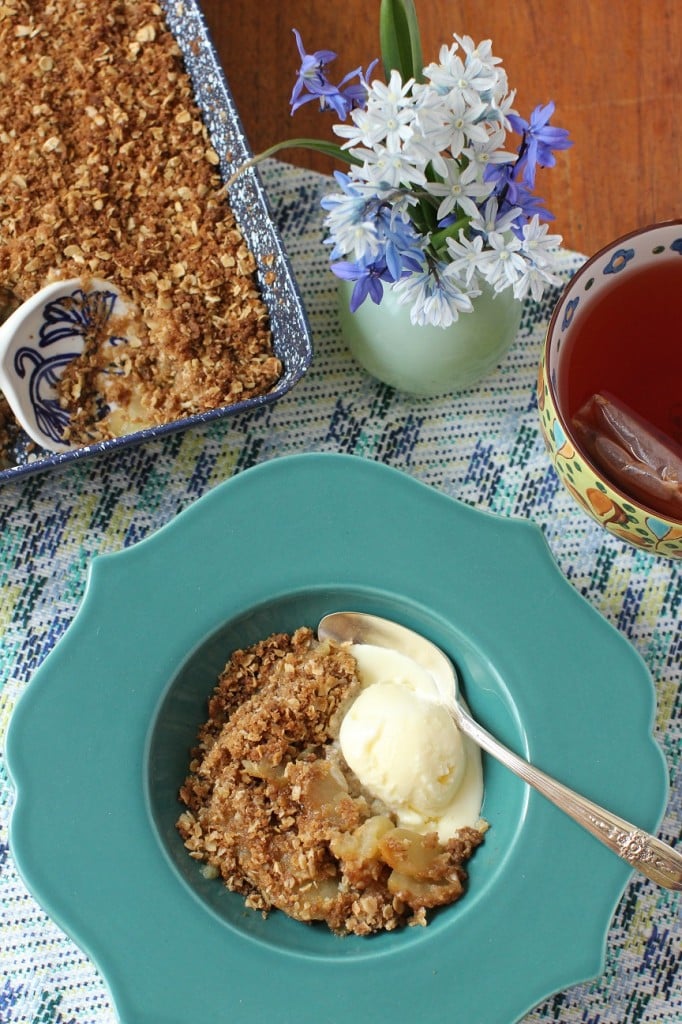 This month's topic is:

I can't believe I've already written a whole year of posts about Canadian food. Where has the year gone?

I have spent a lot of time thinking about what Canadian food is and what it means to me, and honestly, I think I'm further from a clear definition than I was before I started. How do you clarify and encapsulate the quintessential food culture of a country as vast and diverse as Canada?

Canada is known as a melting pot of cultures. The variety is Canada. I see our food identity not so much as the smooth sauce that would come of a melted amalgam of cultures, but rather as a stew pot, where the separate ingredients are still visible. The individual integrity of each flavour is present and distinguishable by taste, but the ingredients have simmered together long enough to absorb and complement the flavours of the other components in the stew - unique but beautifully and deliciously blended. 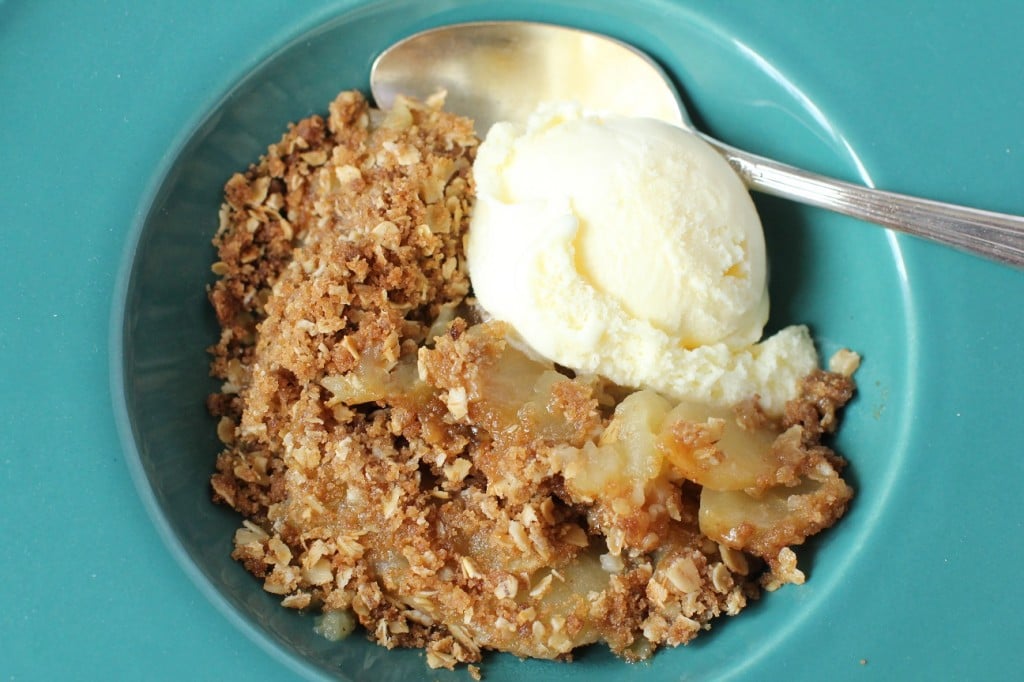 So the cooking of my German family's heritage has been thrown into the stew pot of Canadian food. It has kept a lot of its original character, but has been enhanced and altered by all the other cultures we've come in contact with over my lifetime. When my mom married my dad, she learned a whole different style of German cooking from her in-laws because my dad came from a different part of German Eastern Europe than she did. When she was newly married she cut recipes from magazines and learned how to make 'Canadian' foods from neighbours.

When we lived on the sugar beet farm in southern Alberta, my mom traded recipes with our Japanese neighbours, learning to use ingredients she'd never heard of. She spent hours visiting with her Dutch friend down the road, learning new dishes that became our family's favourites. Mom took a Chinese cooking course and got pointers from the Chinese owner of the grocery store in our small farming town. Years later, when my parents lived on Vancouver Island and my dad was a commercial fisherman, many recipes were shared over coffee with mom's new friend who was Italian. Mom learned to prepare freshly caught seafood from the other fishermen's wives. Then, when they moved to northern B.C. she became friends with a Filipino lady and has learned new cooking methods and tips from her.

Her German cooking style was the core, but it was constantly evolving. 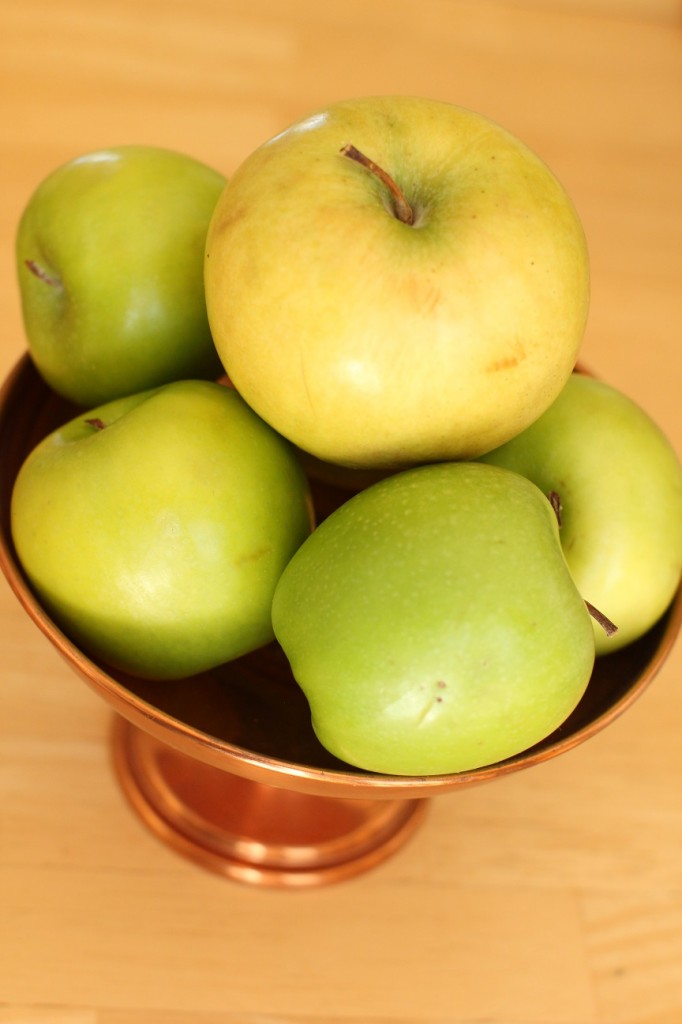 My dad was not one of the typical 'meat and potato' stereotypes of men of that generation. He liked variety in his food and encouraged my mom to cook different dishes and try new ingredients. I remember grocery shopping trips with my mom when I was young. If she saw a new fruit or vegetable in the bins that she didn't recognize, she would pop a few into the shopping cart and we'd all taste them at home. If she didn't know how to cook them, she'd ask other shoppers she saw buying them. That's how we came to know and love eggplants, and mom started planting them in her garden. I remember when kiwi fruits and pomegranates were real novelties - those strange new fruits arrived later to small prairie town grocery stores than the city supermarkets. Fresh pineapples were a rarity - we thought they only came in tins - what were those big prickly funny fruits?

Now I love nothing better than shopping in ethnic markets and coming home with strange new foods to try. I thank my mom for that food adventure streak. She and I still like to do that when we get together. All of my mom's cooking experiences were passed down to me and my four sisters, to become part of our own food story. We added to the legacy as we learned new ways to cook from our connections in life.

So, while I think Canadian food is a wonderful mixture of each person's ethnic background, mixed with the influences of all the people they've learned from in their lives, it is also at its best, the food that brings comfort and happiness to individual families. 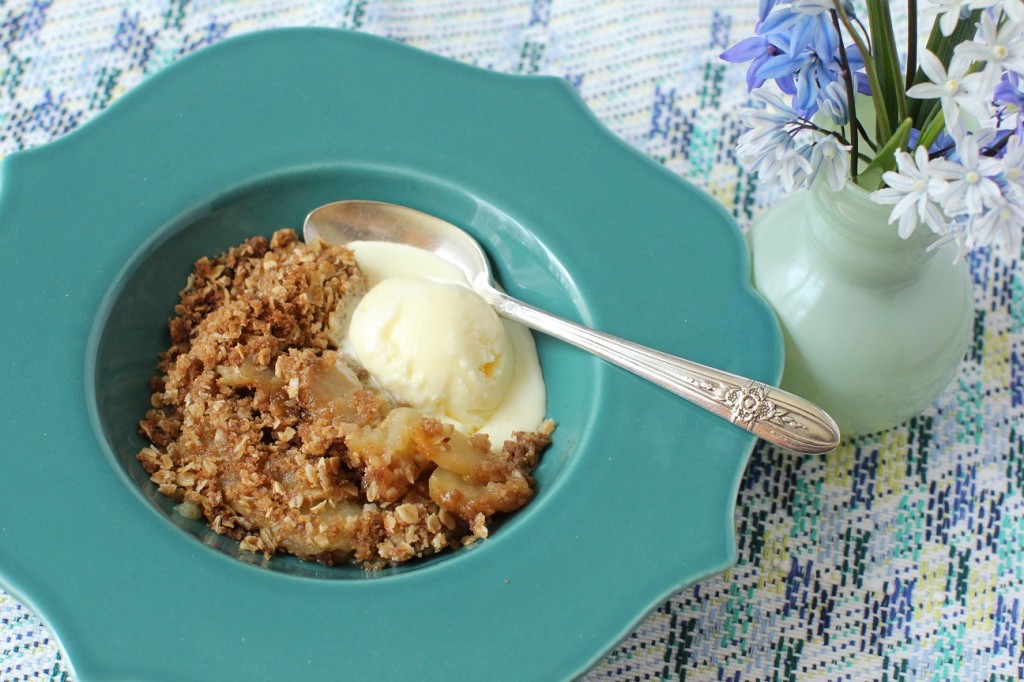 Canadian food is the food we've each grown up with, the recipes written by hand in splattered notebooks, passed on from mother to daughter to sister to friend, adapted and altered to fit each family's tastes.

I was going to put a beef stew recipe up for this post - you know, trying to be all coordinated after using a stew as my analogy for Canadian food, but when I polled my family for which recipe they remember most from childhood and which they thought typified Canadian food in our family - the answer was apple or rhubarb crisp.

So, if Americans can have their apple pie, maybe we Canadians can have our apple crisp . . . at least in our family - and that's what Canadian cooking is all about: each individual family and its stew pot of cooking, combining influences from the array of cultures cohabiting in this huge country and the foods that bring us fond memories of childhood comfort.

Kitchen Frau Notes: This is a very basic crisp recipe that can be adapted in many ways. When I make it with apples, I like to use tart apples. If my apples are a sweeter, I cut the brown sugar down to ½ cup. With rhubarb I sprinkle an additional ¼ cup sugar over the fruit. Sometimes I make a big batch of the crumbly topping, then freeze it in a sturdy zip-top bag, and scoop out the amount I need to make a quick dessert on busy week nights or for unexpected company, spreading it over whatever fruit or berries I can find in the freezer or fruit bowl. So handy. 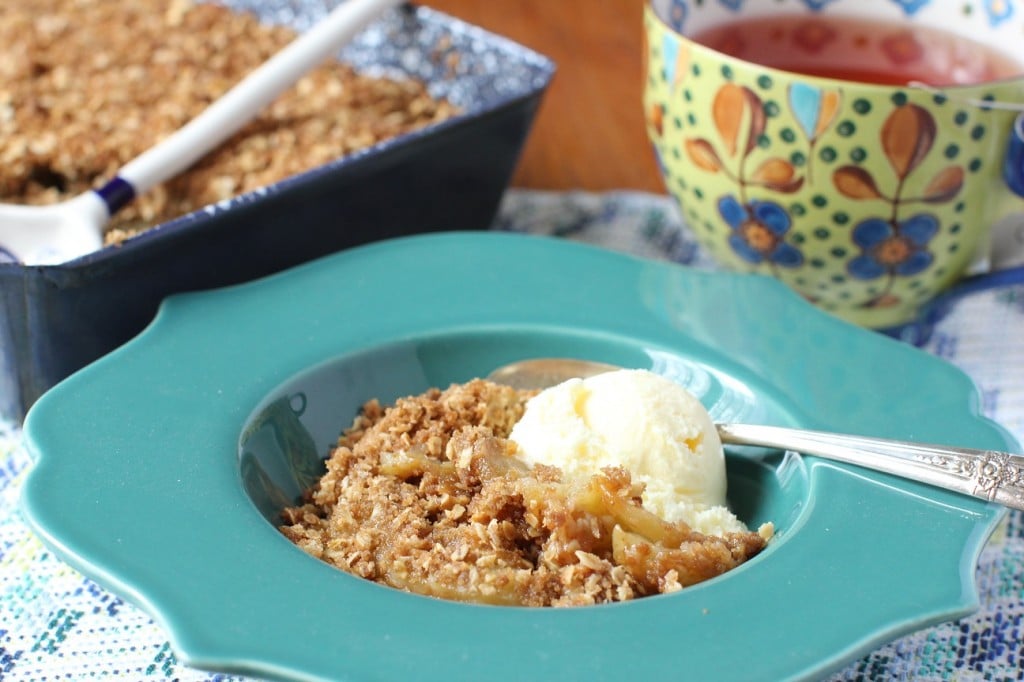 Cream together in a mixing bowl, the butter and brown sugar. Or cut it together by hand with a pastry cutter.

Mix in until crumbly: the flour, rolled oats and cinnamon. 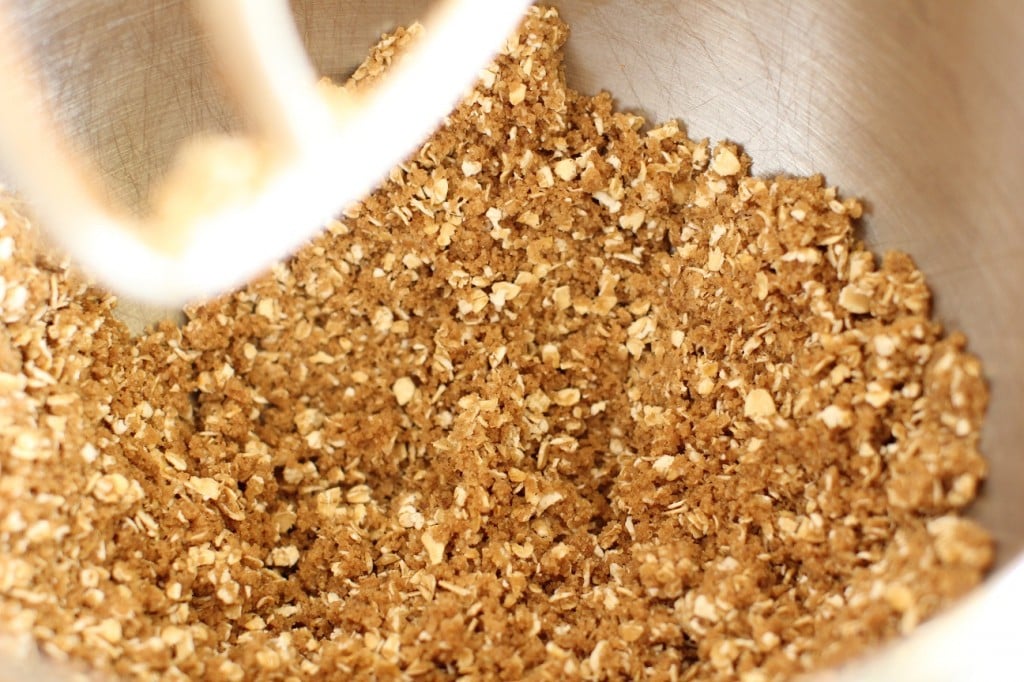 Peel the apples, cut them in quarters and core them, then slice them crosswise. In a greased 9x9 inch pan, arrange the sliced apples or diced rhubarb (or whatever other fruit you are using). 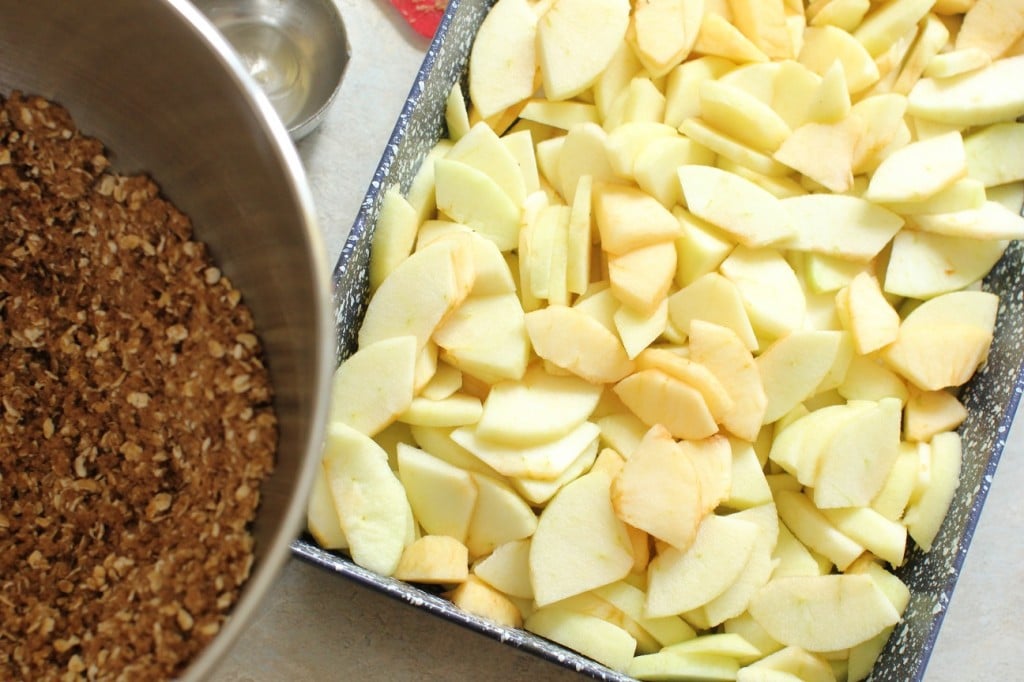 Spread the crumble mixture over the top. 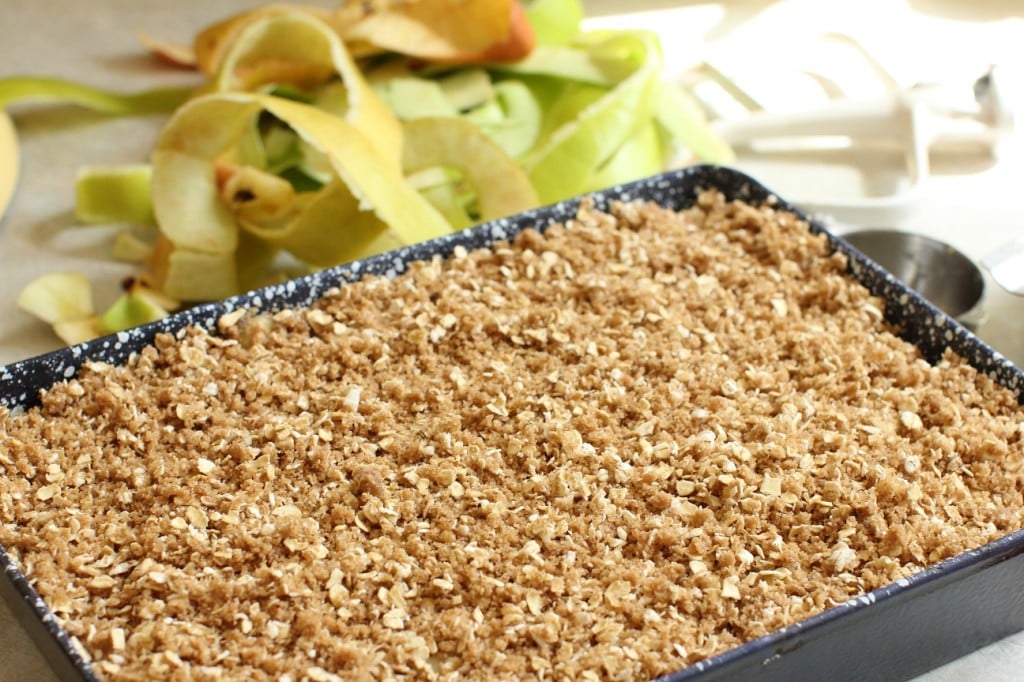 Bake in the preheated oven for 40 minutes.

You can double this recipe and put it into a 9x13 inch pan, baking it for 1 hour.

Serve warm with ice cream. Or eat it cold for breakfast with a spoonful of yogurt - it's pretty darn delicious either way (a good reason to make a double batch). 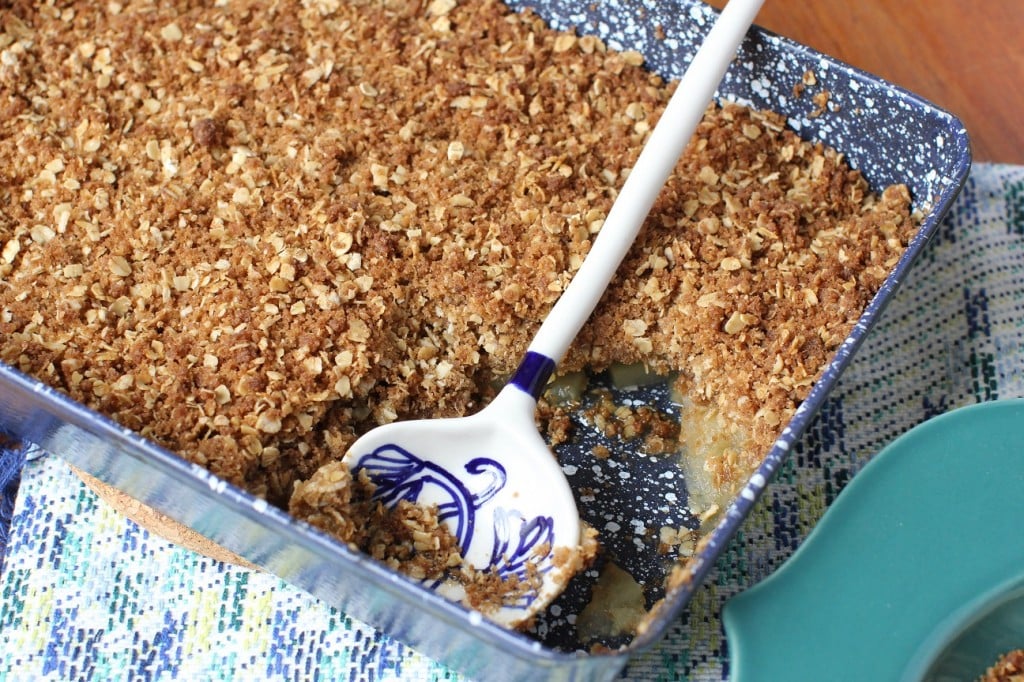 April, 2014: A Canadian Farmer or Producer: Super Easy Bison Roast Technique - and a Profile of a Canadian Bison Farmer

« Off to Europe! and our Favourite Simple Way to Eat Strawberries
Back Home from Europe (with photos) and Ready for Summer with Refreshing Agua Fresca de Chia (Chia Limeade) »