Using this easy technique, you can have a moist tender bison roast without doing any fussing. Use this method for beef, pork, or lamb, too. (The Canadian Food Experience Project, April, 2014) [Skip to recipe.] 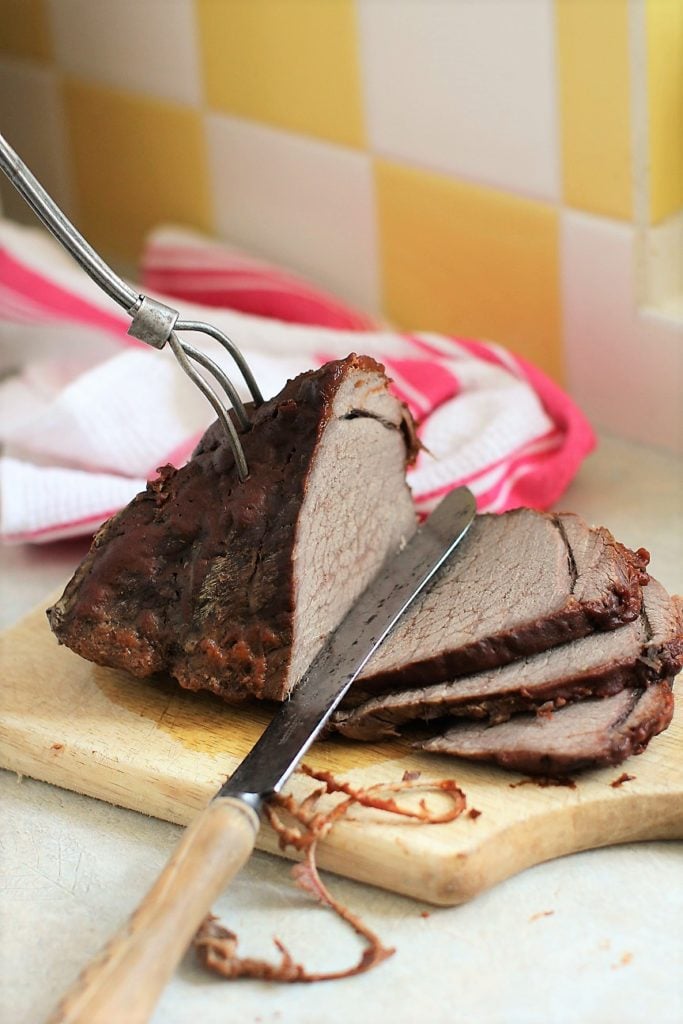 The Canadian Food Experience Project began June 7, 2013. As we, the participants, share our collective stories across the vastness of our Canadian landscape through our regional food experiences, we hope to bring global clarity to our Canadian culinary identity through the cadence of our concerted Canadian voice. Please join us. This month's topic is: A Canadian Farmer or Producer 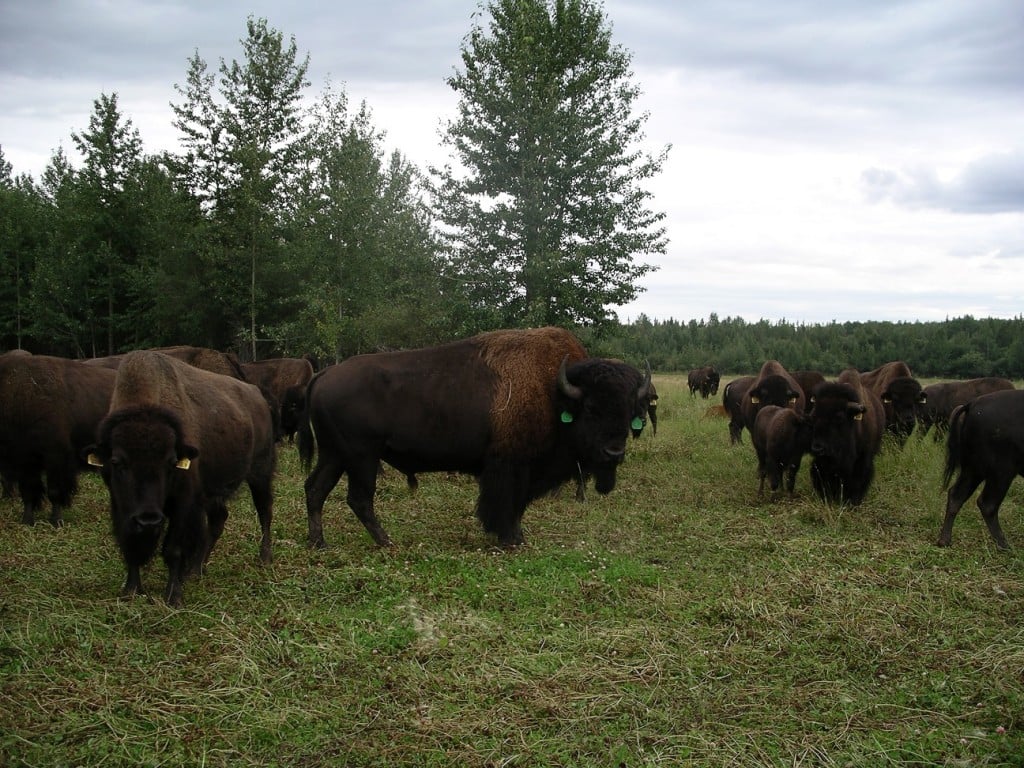 Go back in time a couple hundred years and picture the sun shining in a wide open prairie sky, with a gentle wind blowing over an ocean of waving grasslands. Or picture a harsh blizzard ravaging the snowy landscape. Which animal do you picture roaming across the vastness? 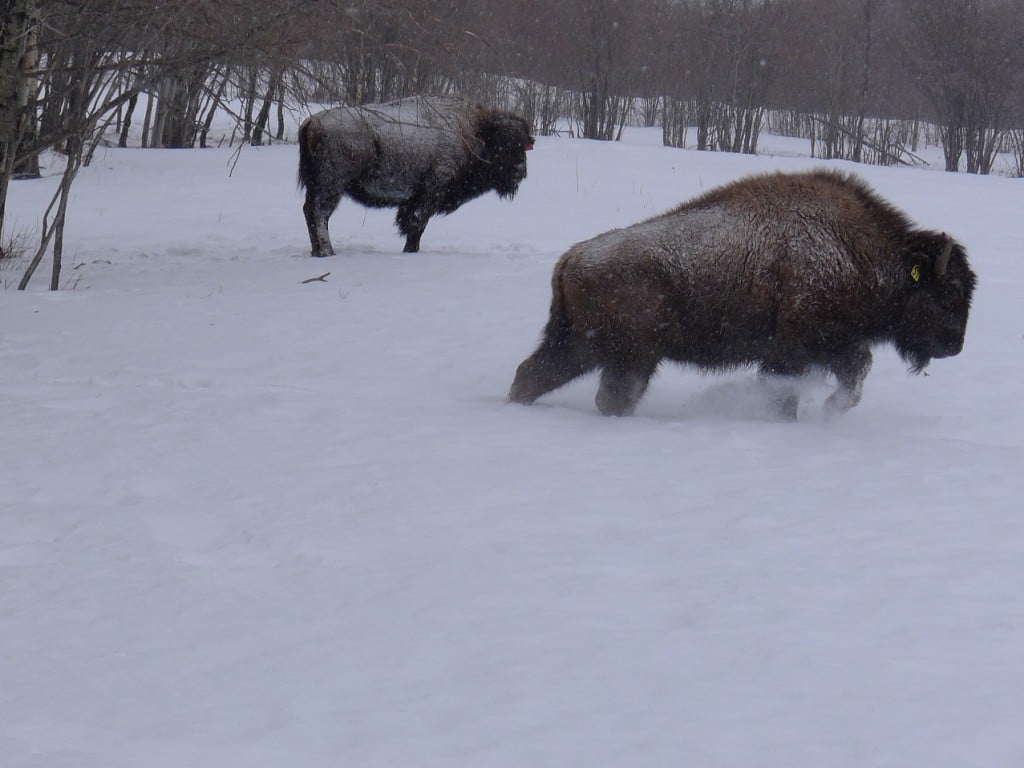 I see a herd of mighty buffalo, now calmly grazing, then thundering noisily into the distance, dust billowing and ground shaking.

Bring yourself back to the present, and you can find that scenario playing itself out again in today's times. Over the last thirty years or so, a growing movement of farmers, ranchers and conservation agencies have been working successfully to bring back this near-extinct monarch of the Canadian and American prairies. The magestic animal that once provided life-sustaining nourishment and spiritual strength to the Plains Indians, is again thriving and providing food for our tables.

Northern Alberta is home to an active community of bison farmers. Meet Dennis and Linda Johnson, of Valhalla Centre in northern Alberta.

Dennis is my husband's brother, and they are second generation family farmers, growing the family farm into a large, thriving enterprise, now including the next two generations - their children and grandchildren. Dennis and Linda have been farming since the 1970's, and in 2000 thought it was time to diversify from grain and fescue crops, to bison. They had first been introduced to bison meat in 1994, due to their young daughter's health problems. She was diagnosed with a severe allergy to many foods, including beef. Bison turned out to be a highly nutritious alternative her body could handle. 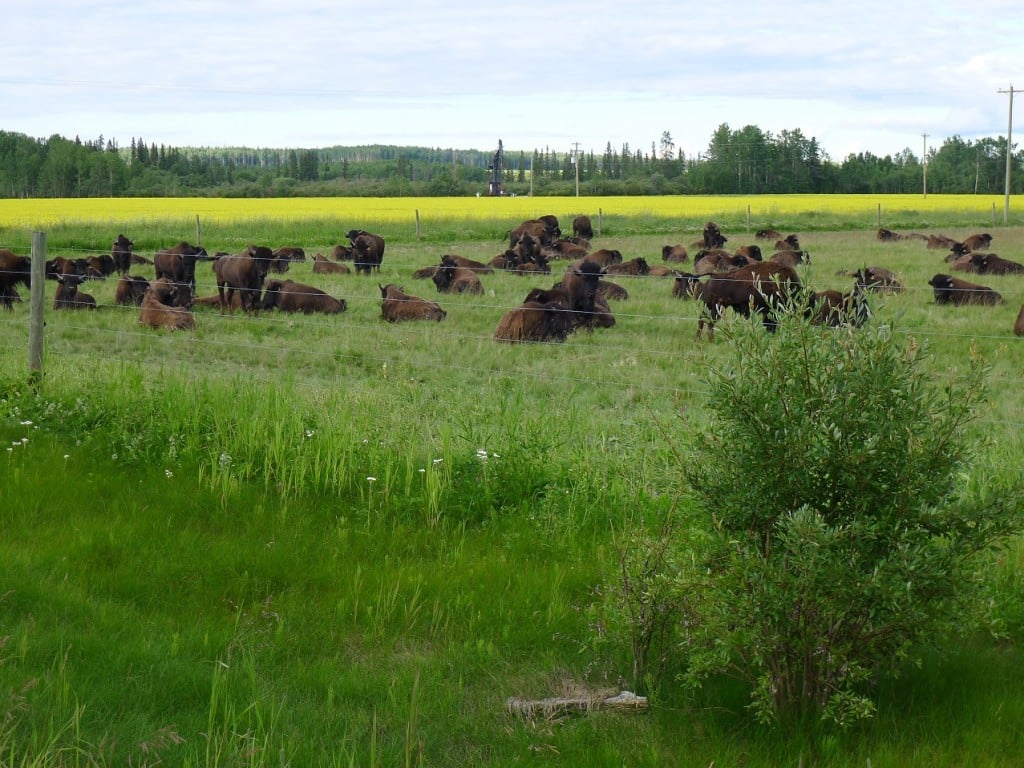 Convinced of the health and economic benefits of raising bison for meat, they equipped part of their land with the the extra strong electric fencing and coralling systems needed to handle bison. Dennis and Linda now have a herd of over 50 bison cows, and every spring purchase over 300 yearlings to pasture for the summer. These animals are sold for slaughter in the fall. Since the Johnson's main crop is fescue (sold for lawn seed), bison are an efficient addition to their farm. The fescue grass is baled after the seeds are harvested, and the bales are fed to the bison in winter or to supplement when pasture is scarce. 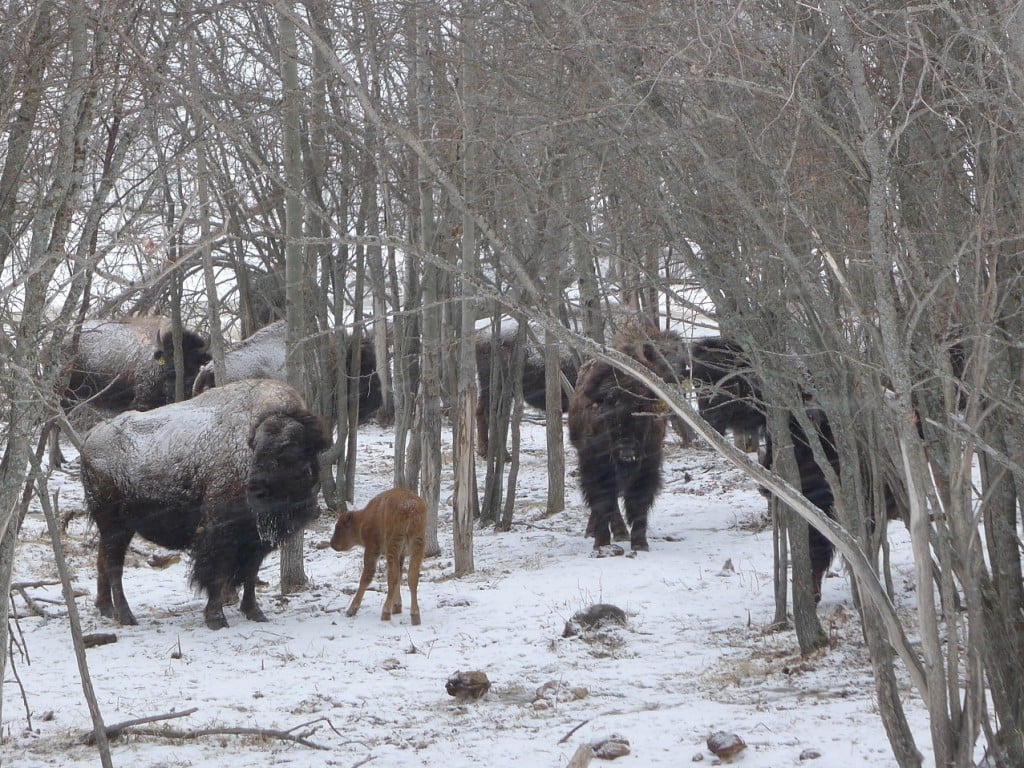 There are two types of bison – wood bison and plains bison – Dennis and Linda raise plains, which make up the majority of farmed stock. Farmed bison originate from animals that are culled directly from wild herds, still ranging in several protected areas of Canada and the northern United States. Although they are commonly referred to as buffalo, the scientific name is bison. Bison are much wilder than cattle – if a female has trouble birthing or if an animal becomes sick they either live or die on their own – it is difficult for veterinarians to work with them out in the pastures. The animals never lose their wild tendencies.

Bison are herd animals, skittish and quick to follow any animal leaving the group. That makes handling them or separating members from the herd a tricky experience, requiring special fences, gates and chutes, and wily, knowledgeable human handlers.

The Johnsons have a separate calving pasture that has no bulls or yearlings in it. Calving starts mid-April. Babies are not handled or tagged until late fall.

Dennis and Linda say their most enjoyable annual experience with the bison comes in April and May when they drive around in the pasture watching all the new calves. They have two pickups they call 'the blue buffalo truck' and 'the white buffalo truck' and the bison are so used to these two vehicles, they remain calm around them. Dennis and Linda can slowly idle the trucks quite close to the herd to observe the bison mamas and their babies.

Linda tells of some of their more heart-stopping bison experiences. One night a group of partying teenagers opened their bull pen, and the bulls got out into the crown land bordering their farm. Carrying a gun and driving his quad, Dennis went searching. One of the bulls charged him, and at about 40 yards away he fired his rifle. The first bullet only caused the animal to stumble but keep thundering toward him. Bison skulls are extremely thick, and from the front their massive heads form a shield for the rest of their bodies. Dennis fired again several more times and finally dropped the bull with the last bullet in his gun when the animal was far too close for safety - a harrowing adventure and costly loss.

Another time, when Dennis went with the tractor to feed the bison, he was horrified to find their hired man’s 3 year old son and his small dog out in the bull pen. The little boy wore rubber boots, so had somehow made it through two high voltage electric fences without a shock. The bulls were only 15 feet away from the toddler and coming closer to satisfy their curiosity. Dennis frantically got the gate opened and drove the tractor between the boy and bulls, pulling him to safety in the tractor. Linda says the lesson the toddler learned was that if he went into the bull pen . . . he got a tractor ride.

The bison have their own adventures. One day the hired man went out to the bison pasture and found one of the bulls had cornered an angry black bear on top of a brush pile. The bear was smart enough to stay out of reach. Even bears don't want to be on the receiving end of a bison's advances. 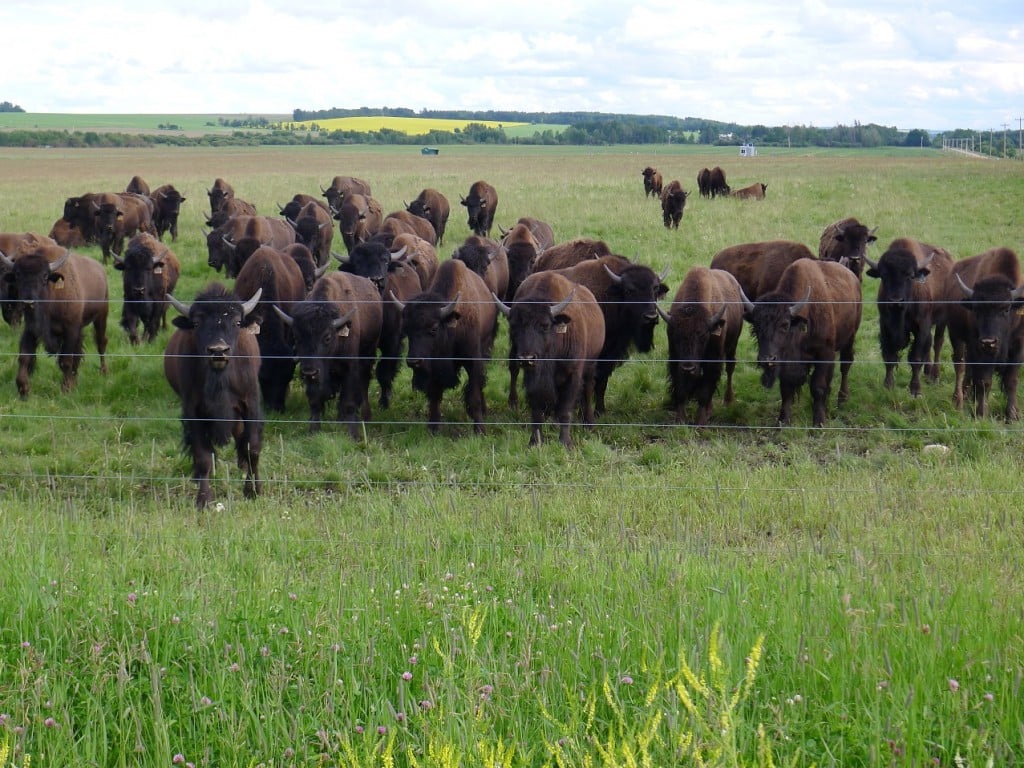 The Peace River Country (in northern Alberta and British Columbia) has 14.4% of Canada’s bison herd. Alberta has 49.7% of Canada’s herd. The Johnson's little hamlet of Valhalla Centre is a key area for Bison Production – one farmer alone has over 1200 animals in his herd.

Raising bison is a naturally sustainable farming industry, playing an important role in preserving natural grasslands, and preserving a species of animal directly descended from the magnificent beasts that roamed this vast continent long before we did. The superior hardiness of these tough wild animals makes them disease resistant, resulting in less drug and medical intervention. Bison are raised with no added growth hormones, stimulants, antibiotics or animal by products, producing a highly nutritious and incredibly flavourful meat.

Consider this information from the Canadian Bison Association: 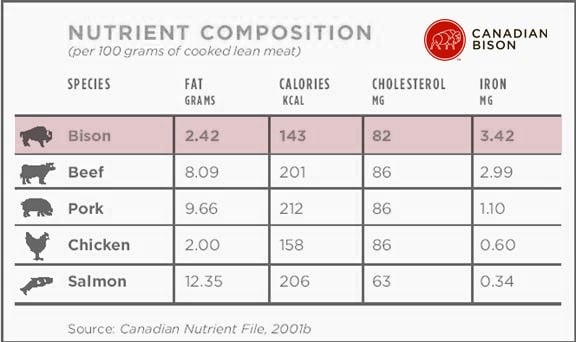 Wow! Bison has less calories than chicken, less cholesterol than beef, and considerably more iron than any other meat. It also has more vitamin B12 than beef, pork, or chicken.

Plus, it tastes great - similar to choice cuts of beef, but leaner, richer and slightly sweeter.

Bison is easy to cook, almost like cooking beef, but with a bit of modification. Linda recommends the best way to cook bison burgers is on a barbecue or over a campfire. She uses only pure ground bison - no added ingredients - and cooks the patties until they are just slightly pink in the middle for the juiciest and most intense bison flavour. Shortly before they are finished, she lays a slice of cheddar or other cheese on top. Linda says the cheese melts and gets almost completely absorbed into the meat, adding a luscious layer of flavour. Her favourite way to cook bison burgers is over the campfire. Place a grate over the flames, cover the grate with tin foil and cook the burgers til juicily perfect, then top with the cheese.

Bison roasts, because of their leanness, benefit from long, very slow roasting. Years ago, Linda gave me her technique for making her amazing tender roast bison. I have been using it ever since, and I tell you - it works perfectly for any kinds of roasts: beef, pork, leg of lamb. I've tried them all and had perfect results every time. If you are looking for easy - you have found it. Plunk the solidly frozen roast in the oven in the morning, and leave it. That's it. Just leave it alone. You'll have melt-in-your-mouth roast bison for your dinner guests in the evening.

*All photos of bison and bison farming by Linda Johnson 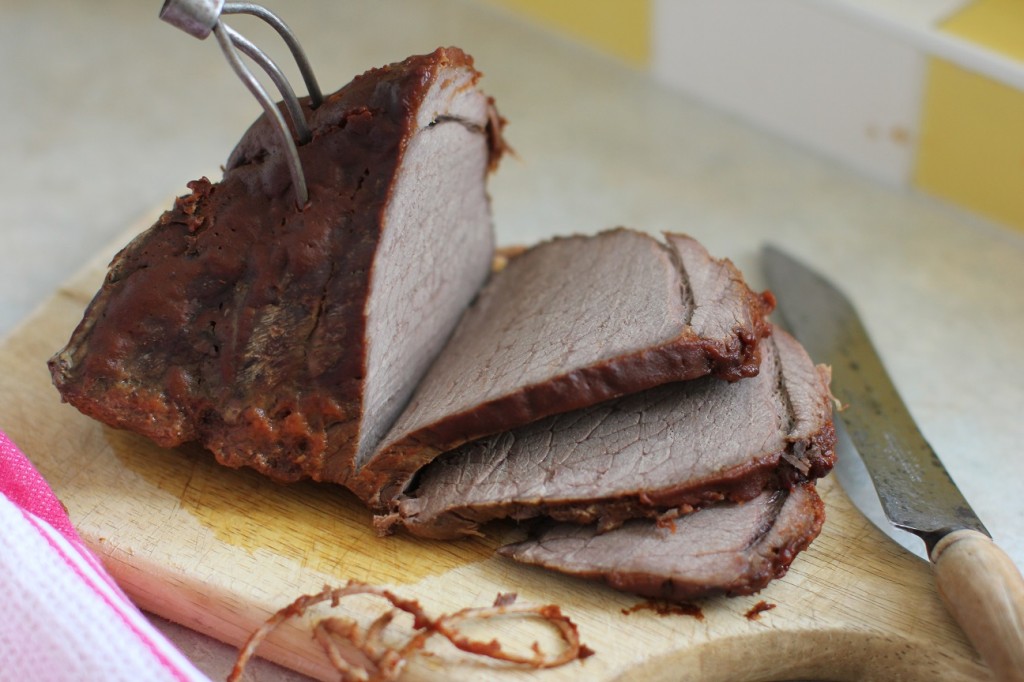 At about 7 or 8 o'clock in the morning, place the frozen roast into a roasting pan or dutch oven just a little larger than the roast. 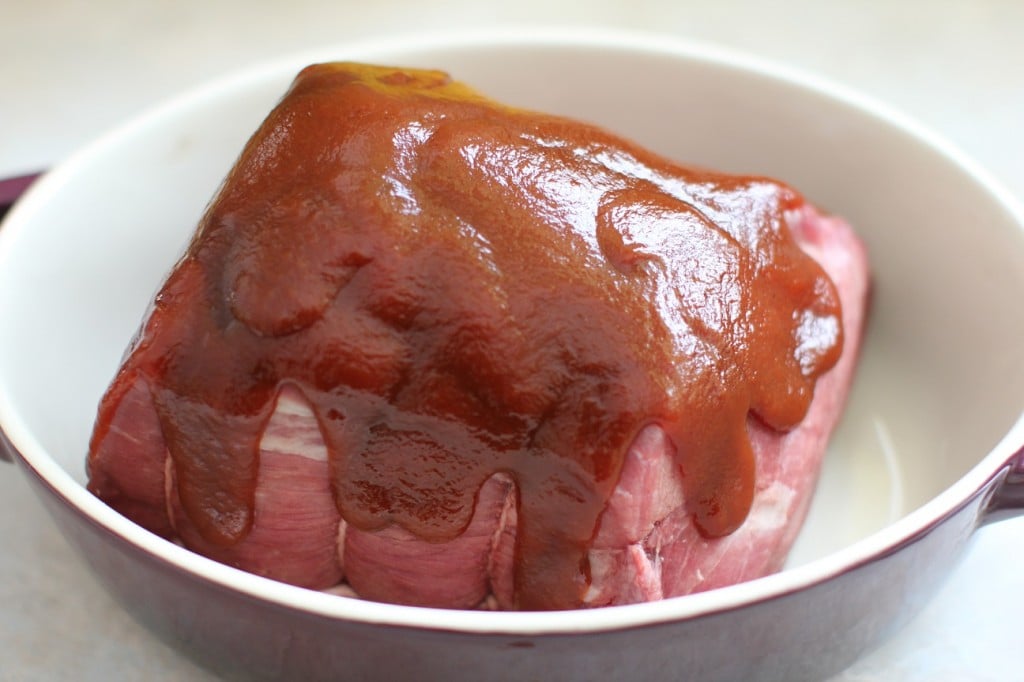 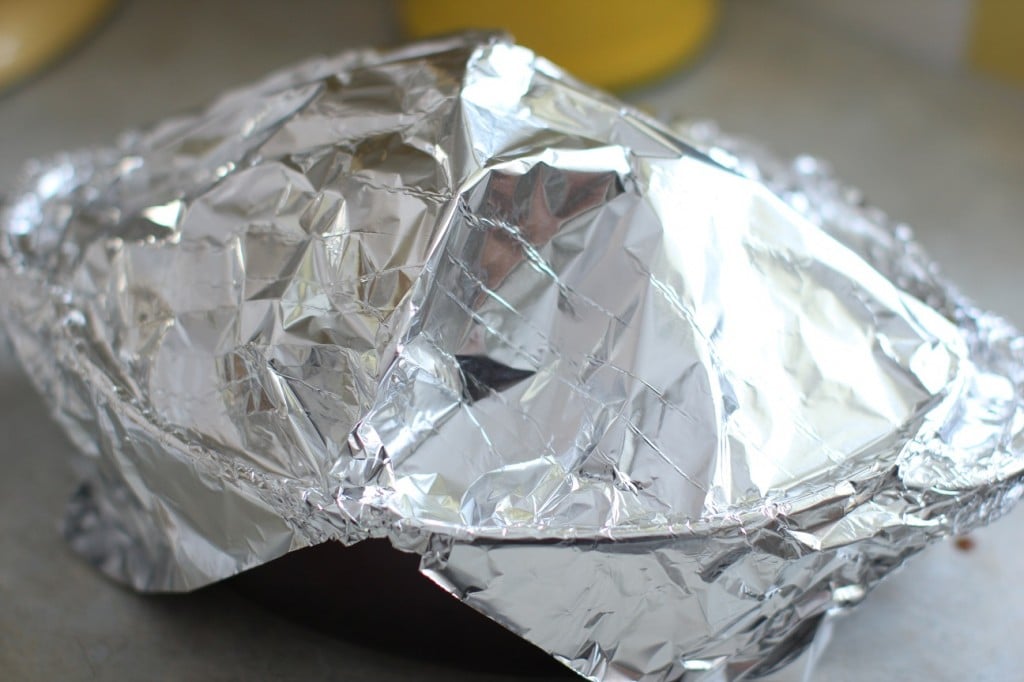 Place into the 225°F oven and leave it all day. Just walk away. By 5 or 6 o'clock the bison will be roasted to beautifully tender perfection.

There will be plenty of liquid in the pan to make gravy if you wish. Take the bison roast out of the oven, let it sit in its juices for about 15 minutes, then remove the roast, slice it and return the slices to the roasting liquid to keep warm until ready to serve. Since bison roast is so lean, this adds an external layer of moistness. If making gravy, reserve a few tablespoons of the meat's juices to moisten the sliced roast.

*This slow-roasting method works with any type of frozen roast. I have tried it with beef and pork to great success. I roasted a whole leg of lamb this way and it was marvellously moist and tender.

(Linda says she has even prepared small bison roasts this way, by turning the oven as low as 175°F.) 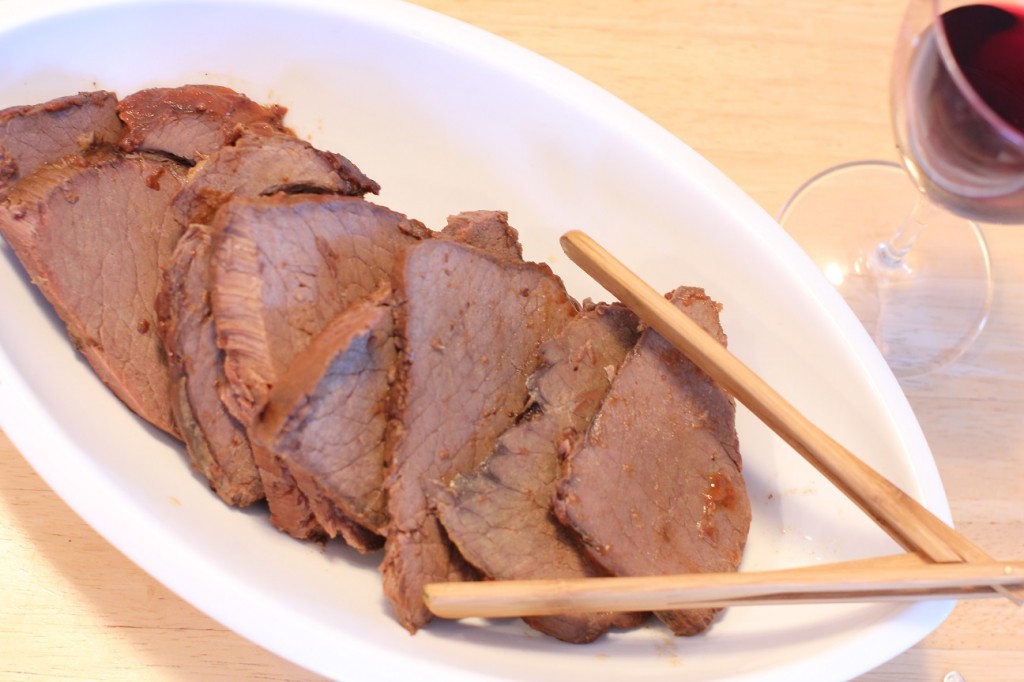 My favourite way to eat the leftover bison roast the next day is cold, thinly sliced and with an assortment of mustards.