Make a stunning traditional Kransekage - the Scandinavian ring cake made simply from almonds, egg whites, and sugar - for your next special gathering. This fantastic cake is crisp, yet chewy and will wow your crowd. It's as easy to make as rolling play dough! And it's gluten-free, too. (Skip to recipe)

Last fall I was asked to make a wedding cake. The groom was Danish and the bride was Canadian (and had multiple food allergies). The beautiful, traditional kransekage immediately sprung to my mind. It's a stunning tower of rings. Dense, chewy, made simply of ground almonds, egg whites, and icing sugar - so delicious. This cake is very special (and simpler to make than it looks).

Raymond's sister, June, has a Norwegian husband, and when I was chatting with her one day, she said 'Oh, I have the pans you can borrow. Wade's grandma brought them over from Norway when she emigrated to Canada in 1927.'  So I got to use a lovely set of antique Norwegian kransekake forms that were probably over 100 years old (nobody knew how long they'd been in the family before they made their way to Canada). 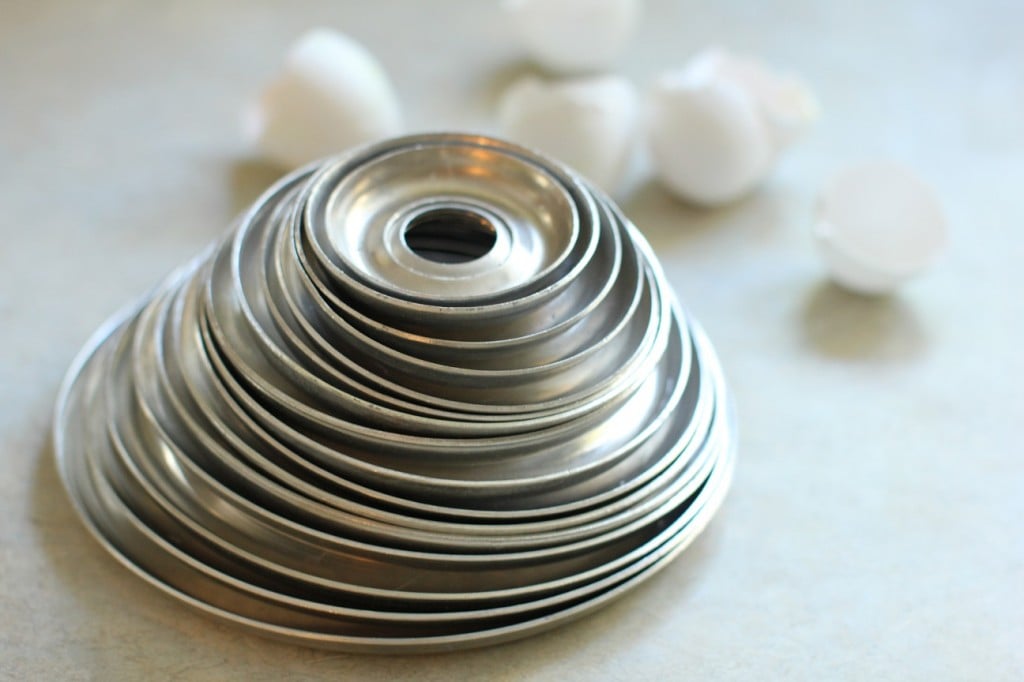 In Danish, the cake is called kransekage, and in Norwegian it's called kransekake or kransekaka, but it's basically the same delicious thing and is served for any special celebrations. The recipes I found when researching this cake were all similar, though several different methods of making the cake were given, some needing to freeze the dough first, or cook it, or refrigerate it, some piping it into the forms, some with a bit of added flour and some without. I chose to use a recipe with a bit of added flour for stability, since it sounds like the cake can sometimes inexplicably flop. The bride asked for a lemon and cardamom flavour, and that was an easy and tasty addition. I made a practice batch first, (it turned out well - just needed to tweak the flavouring amounts) then made two batches of rings and assembled them into a double high cake, to serve all the guests.

The kransekage was a showstopper, and I think its success can be measured in how many wedding guests kept sneaking back to get another piece. The dense chewy, lemon and cardamom scented chunks of the cake rings were addictively delicious - not your average light, fluffy buttercreamed cake. In their fully assembled glory, those rings (like symbols of the wedding ring) became a beautiful, lacy, flower-adorned tower - a stunning way to celebrate a union of two souls.

At the wedding reception, the bride and groom removed the rings, starting at the top, then broke them into bite-sized pieces.

After feeding each other a piece of the cake, they piled the pieces onto a tray, then made their way around the room, offering a piece to each of the guests. In Danish tradition, it means good luck for the bride and groom if every guest at the wedding tastes a piece of their cake.

If you like to play with play-dough, you'll love making a kransekage. The dough is pliable and easy to work with - you're just rolling a bunch of ropes! Then when they are baked, all you do is drizzle loose zig-zags of icing over each ring to glue them together.

Poke small flags into the sides to be traditional, or flowers like I did, and it's gloriously decorated.

*Or you can make fantastic kransekake cookies with a slight variation of the dough. These cookies are a hit, too!

Kitchen Frau Notes: For this recipe you will get better results using weights, rather than volume measures. The problem with volume measures for dry ingredients is they can easily vary by how heavily you pack your measuring cups or how fine the almond meal is ground. Kitchen scales are inexpensive and well worth the investment - I got my digital one for about $15.

I used a very finely ground blanched almond flour for the wedding cake, which I ordered online, and it made for a beautifully smooth surface to the rings, but it would also work with more coarsely ground almond meal (like Bob`s Red Mill brand). You could also use the same weight of whole blanched almonds and grind them yourself in a food processor.

The traditional kransekage is 16 or 18 rings. For a double height, 32-ring, kransekage like I made, you will need to make 2 batches of the recipe below.

You can also make this cake without ring molds, if you want a more rustic look. Just roll ½ inch thick ropes and shape them into 18 free-form rings, each one ½ inch bigger in diameter, with the top ring about 2 inches in diameter and the bottom one about 10 inches in diameter (measuring from the centers of the ropes). Start with the smallest ring first in order to end up with a nicely tapered top to your cake. Bake them on parchment paper lined baking sheets.

Traditionally, kransekage is eaten from the bottom up, keeping the decorative top intact till the last, but for the wedding, the bride and groom removed and saved the top section, and served the rest to the guests.

Since icing sugar contains corn starch (which the bride is allergic to), and the corn-free icing sugar I purchased was quite grey in colour, I made my own icing sugar. It was so simple to make, and I've included the recipe below. 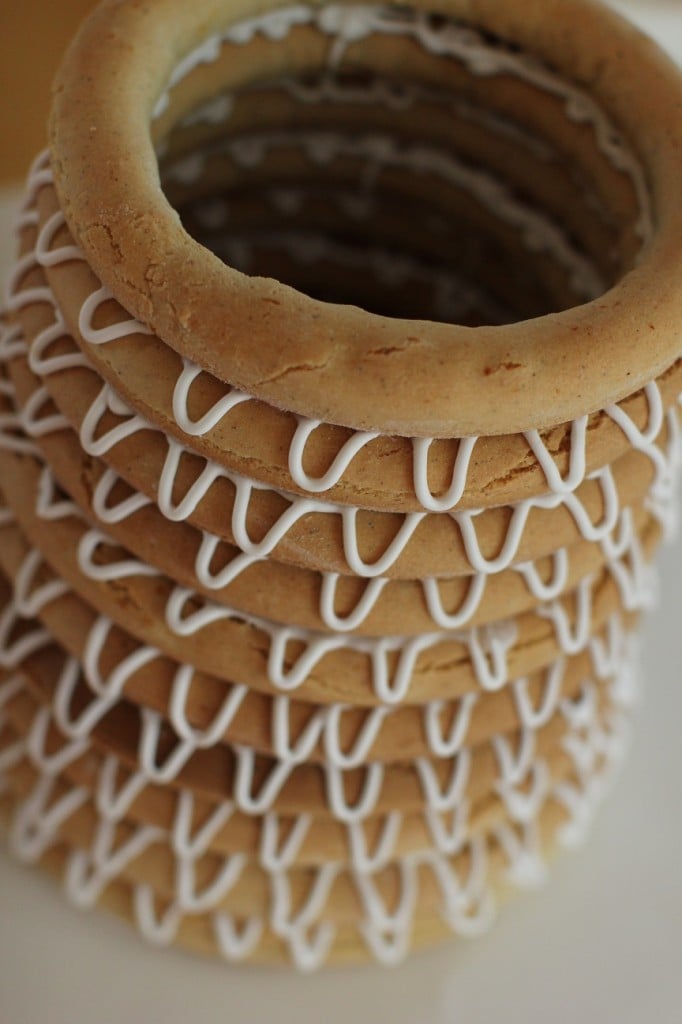 Spray the ring molds with cooking oil spray or lightly brush them with oil. Dust them with sweet rice flour. Set them onto cookie sheets. 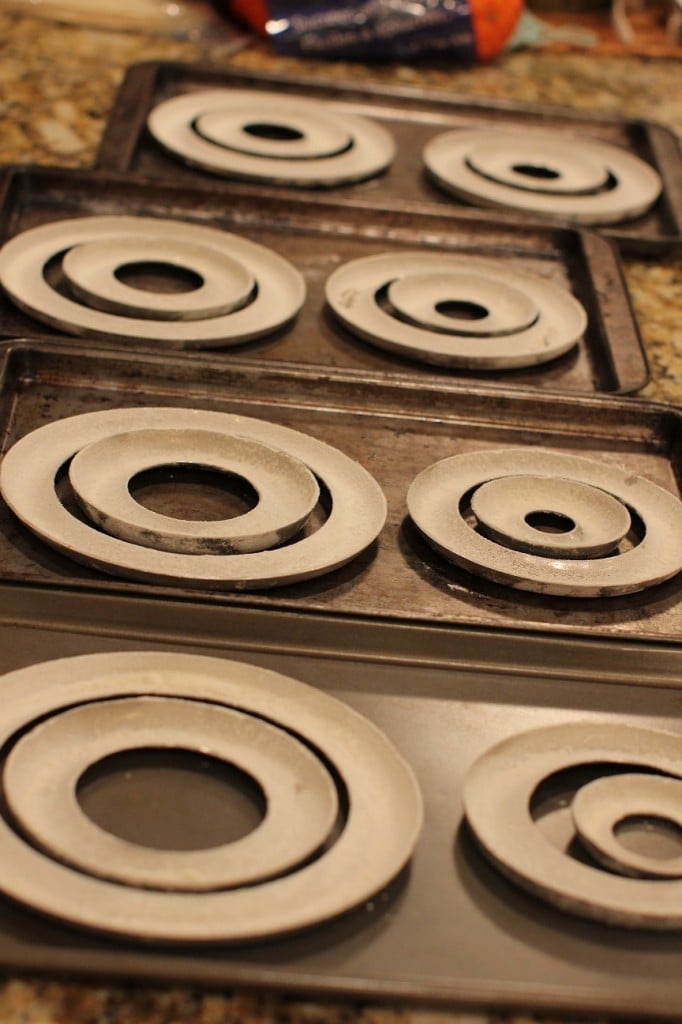 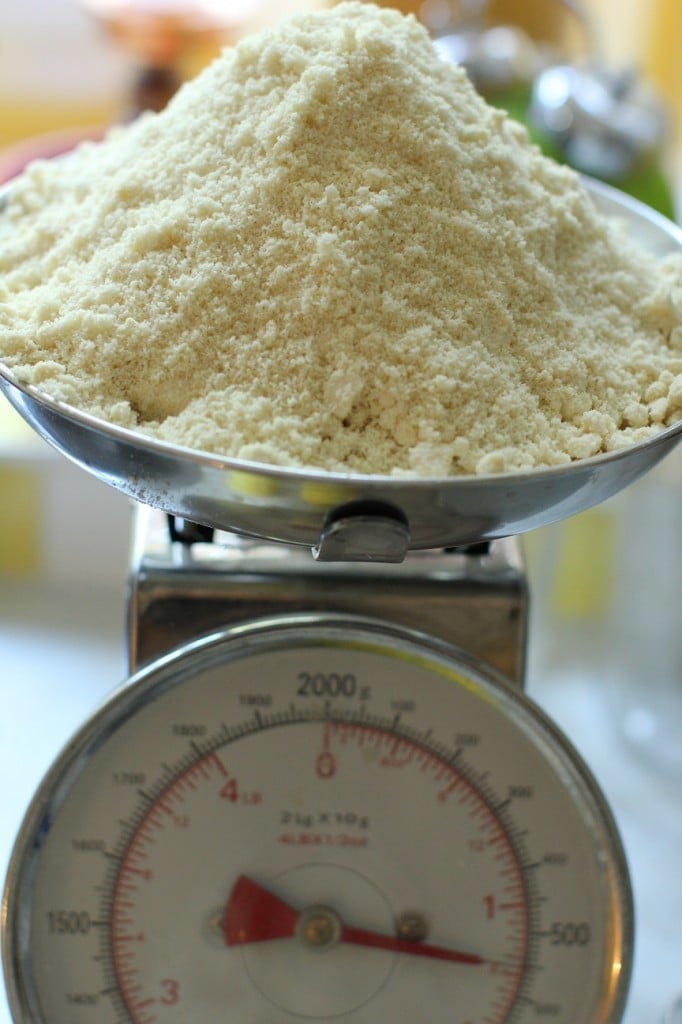 In the bowl of an electric mixer, combine the ground almonds, icing sugar, sweet rice flour, lemon zest and cardamom. Mix on low speed to combine. Add 4 of the egg whites, one at time and beating well after each addition. 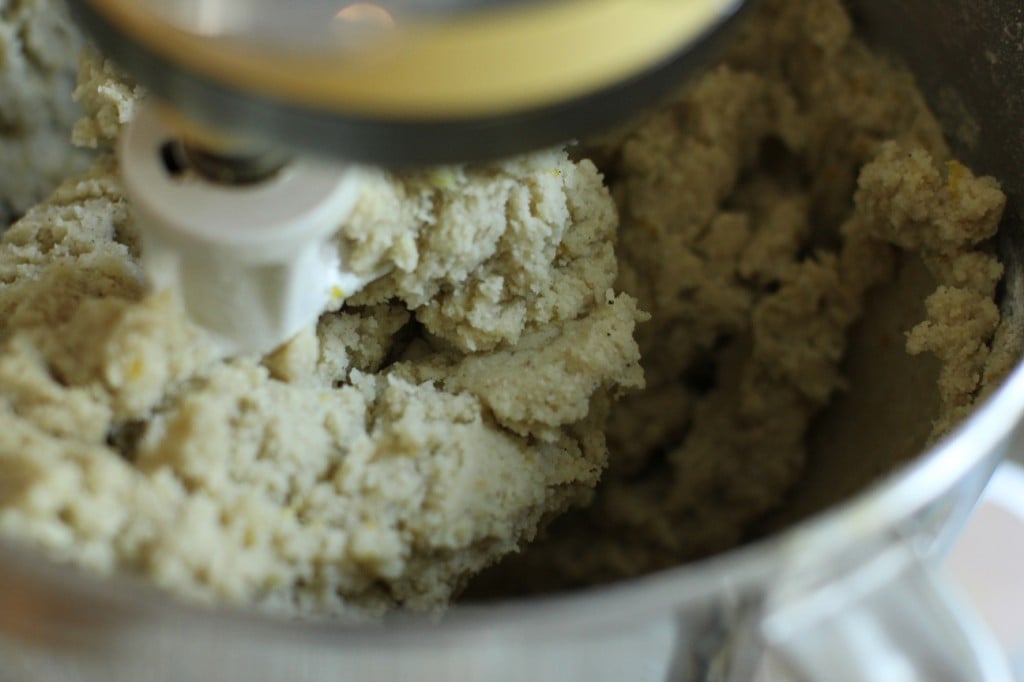 The dough should be starting to come together and come away from the sides of the bowl. Add as much of the fifth egg white as you need to make the dough come together and be pliable. You will probably not need all of the fifth egg white. Discard the remainder. You can tell if the dough is moist and pliable enough by pinching some of it between your fingers. It should stick nicely together. If it is too moist, add a bit more sweet rice flour. You are aiming for the texture of soft 'playdough', not stiff modelling clay (plasticine).

Scrape the dough onto your work surface and pat it into a large ball. Cut the ball into quarters and roll each chunk into a smaller ball. Work with one ball at a time and keep the rest covered with plastic wrap to prevent them from drying out. 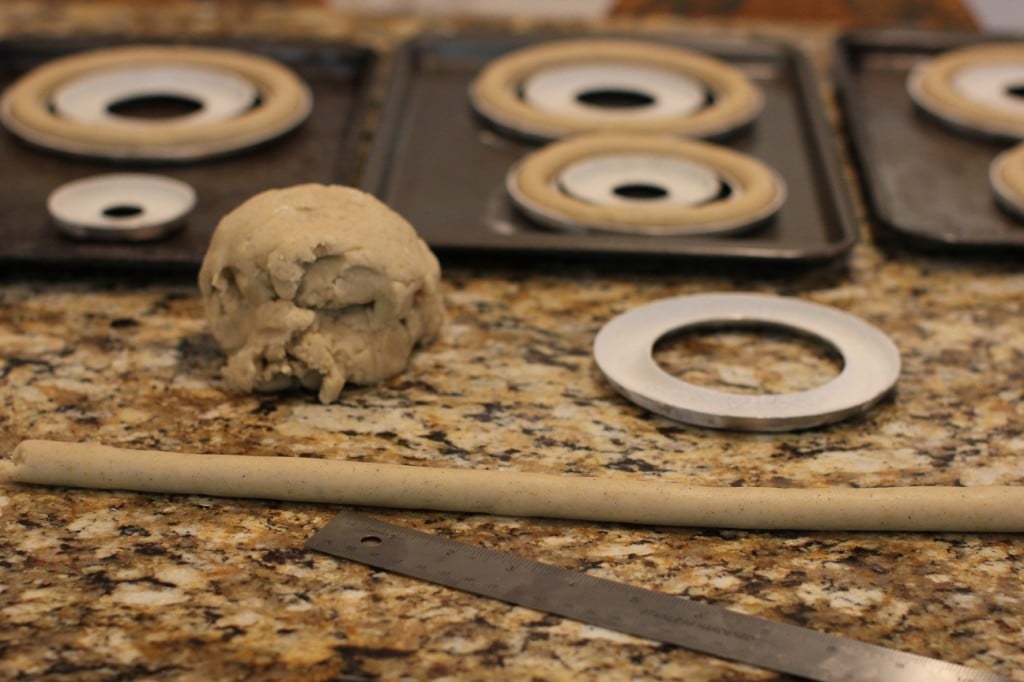 Roll each ball into a long, even rope. I found it handy to use a ruler to keep the ropes uniform. For my 16-ring  set of molds, I made each rope 9/16ths of an inch thick. (If you have the 18-ring set you will need to make them only ½ inch thick to have enough dough for all rings.) Lay a piece of rope into one ring at a time, pinching off the excess length and smoothing the ends together to seamlessly join them. The dough is very forgiving, and it`s easy to re-roll a few rings if you don't have enough dough to make the last ones.

Bake in the preheated oven, in batches, for 15 to 20 minutes, until the rings are a golden  caramel colour. 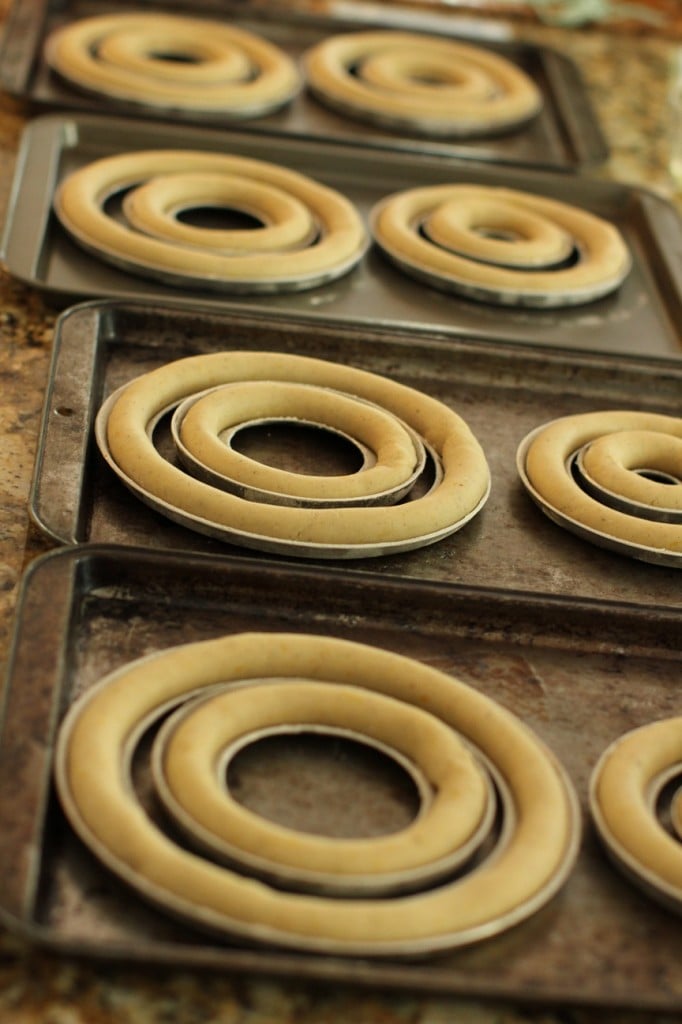 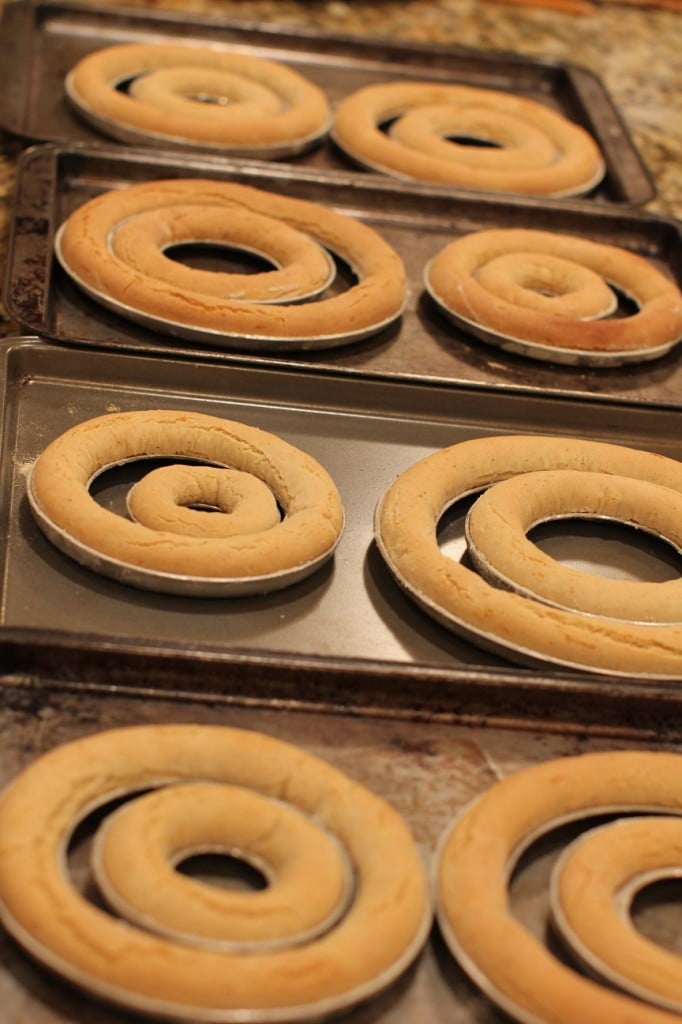 Leave the cakes to cool in the pans, then carefully remove them. You may have to insert a knife tip underneath the rings to help them pop out of the pans. Gently wipe any loose flour off the bottoms with a clean dry tea towel. At this point they can be stored in a tightly sealed plastic container for a few days. Put a piece of apple or a few pieces of orange peel in with the cake rings to help them keep their unique dense chewiness.

Make the Icing: Whisk together the egg white and icing sugar. Add enough lemon juice to make it a good drizzling consistency. Spoon the icing into a piping bag with a small round tip, a squeezable plastic piping bottle made for icing, or a heavy duty plastic bag and snip off a tiny bit of one corner to make a round hole.

To assemble the cake, lay out your rings in order of size. You are supposed to use the rings bottom-side-up to have the smooth part on top, but I found I still had flour stuck to the bottoms, and my tops were nicer, so I used them right-side-up. I suggest you pick whichever way looks better, and start with the largest ring. Attach it to your base or plate with a ring of icing. Pipe zig-zags of icing loosely over the top of the ring. I added an extra squeeze of icing all the way around the ring, as added insurance since this wedding cake was so tall. If you are making a regular height cake, you won't need the extra ring of icing -the zig-zags will be enough to hold the rings together. Place the next smallest ring on top and repeat. Continue until you reach the smallest ring at the top. 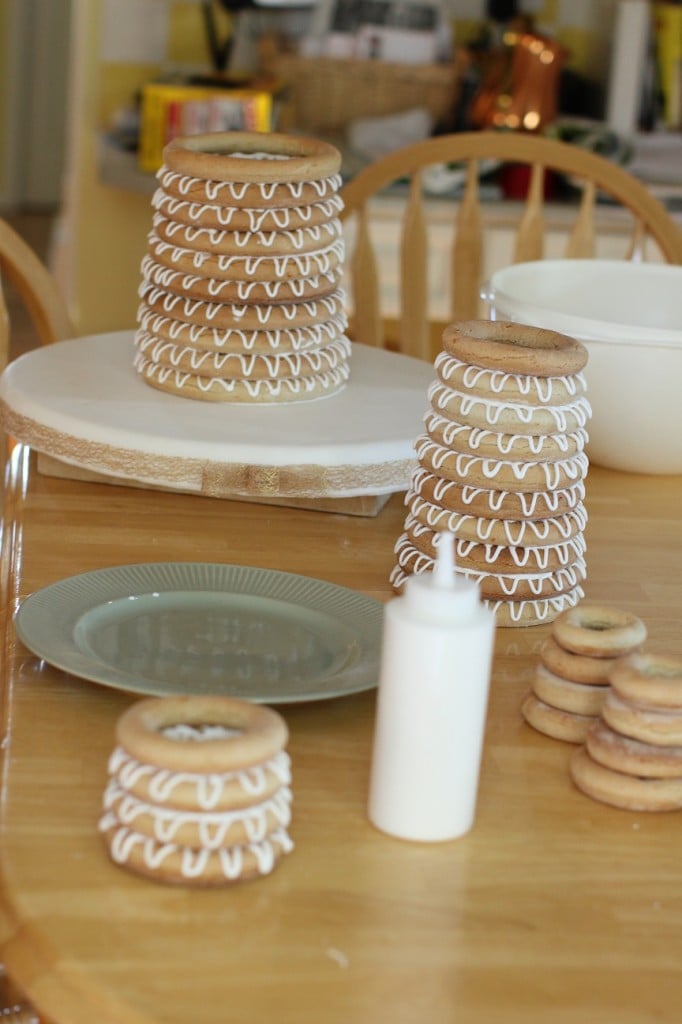 Since I made the kransekage double height, I iced it together into three sections, then packed each section into a box and surrounded it with tissue, to transport to the reception. I brought along my icing squeeze bottle, then added the last layer of zig-zags and glued together the sections at the reception hall.

*Note: For the wedding cake base, I purchased a foam disk from a craft store and glued a circle cut from foamcore board onto the top and bottom of the disk to add a bit more height. I purchased ready-made fondant and rolled it out, then cut a large circle and covered the foam disk with it, smoothing it well. I wrapped a decorative ribbon around the edge of the fondant-covered base, then glued the first kransekage ring to it with icing. I made a wreath, and several small sprays of dried and silk flowers, which I attached to the cake with corsage pins.  A set of simple wooden bride and groom figures adorned the front of it. 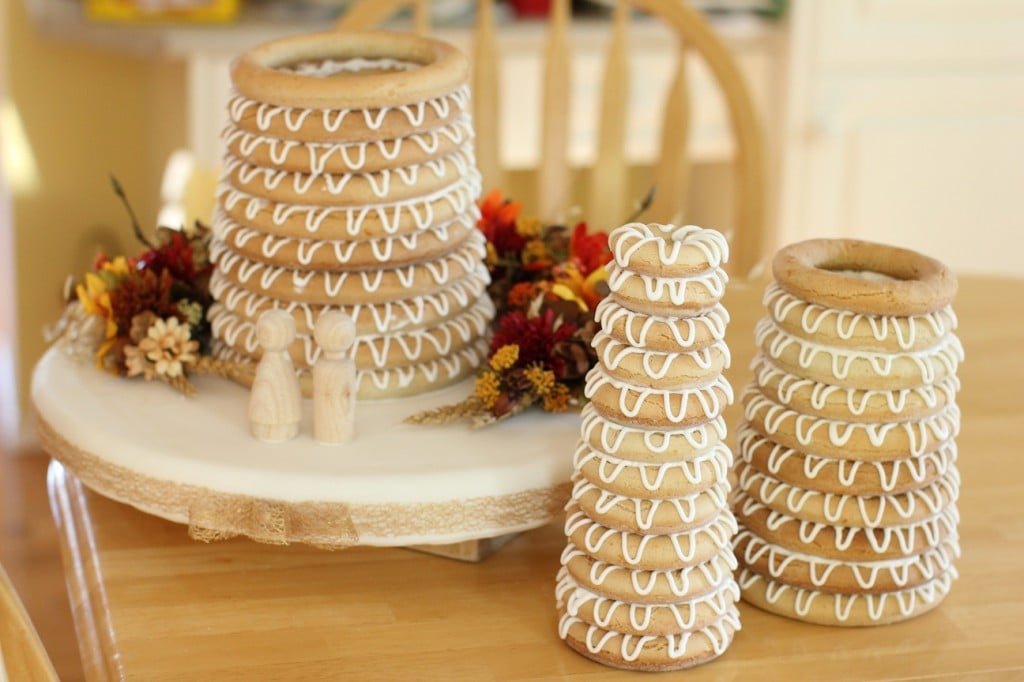 *How to: Make Homemade Icing Sugar

Whiz together in a blender until very fine and powdery when rubbed together between your fingers. Cover the blender with a tea towel while blending so the sugar dust doesn't sift around in the air. Only blend one batch at a time or it won't blend evenly.

This month's topic is: February 2014, A Canadian Love Affair