Mom’s Rhubarb Cake, with a Custardy Center and Crumble Topping

Cut yourself a big slab of tangy rhubarb cake with its creamy center and sweet crumble topping – it’s the heady taste of summer on your fork. (Skip to recipe.) 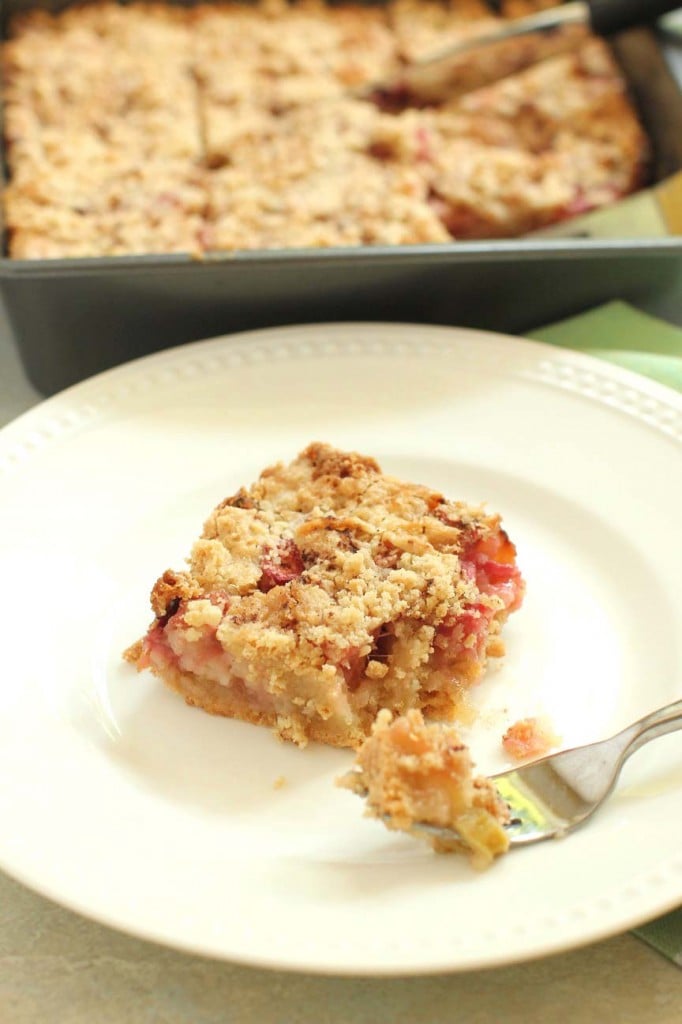 I think I have baked this cake well over a hundred times in my adult life – at a conservative estimate. It’s my mom’s recipe and our kids’ favourite rhubarb cake. When I bake rhubarb cake for the first time each year, we know that Spring has officially arrived and summer is hard on its heels.

There’s something exciting about those gnarly green knobs of wrinkled leaves that poke through the soil when all other greenery is still hiding fearfully, deep in the earth. Rhubarb is one tough dude when it comes to handling our cold winters. In fact, it doesn’t even like living in hot climates. Southerners need to coddle their rhubarb plants like we do our tender tropicals, whereas for us northerners rhubarb grows best when left alone and can outlive some humans. It’s often the one plant thriving amidst the tall, tangled grass around long-abandoned pioneer homes on prairie farm sites  – the sign of a once productive and fruitful homestead garden.

Rhubarb’s old-fashioned name is Pie Plant, and although its tartness is unparalleled in a pie (except maybe by the sour cherry pie of Billy Boy fame), rhubarb is pretty wonderful in this jewel-studded cake, too.

After a long hard winter, it’s exciting to be eating the first edible harvest to be reaped here in the north. Rhubarb cake is the loud, pucker-inducing trumpet blast announcing that growing season is officially here. But it is also the hardy workhorse of summer – its stems provide luscious tart fruit for stewing, crisping, juicing, and baking all season long. 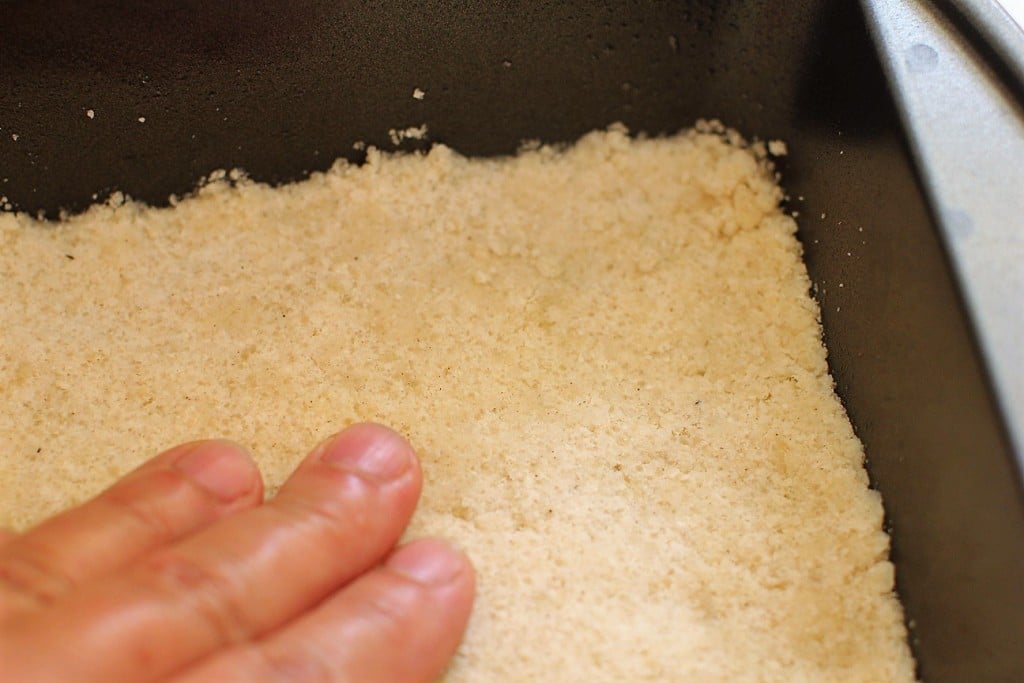 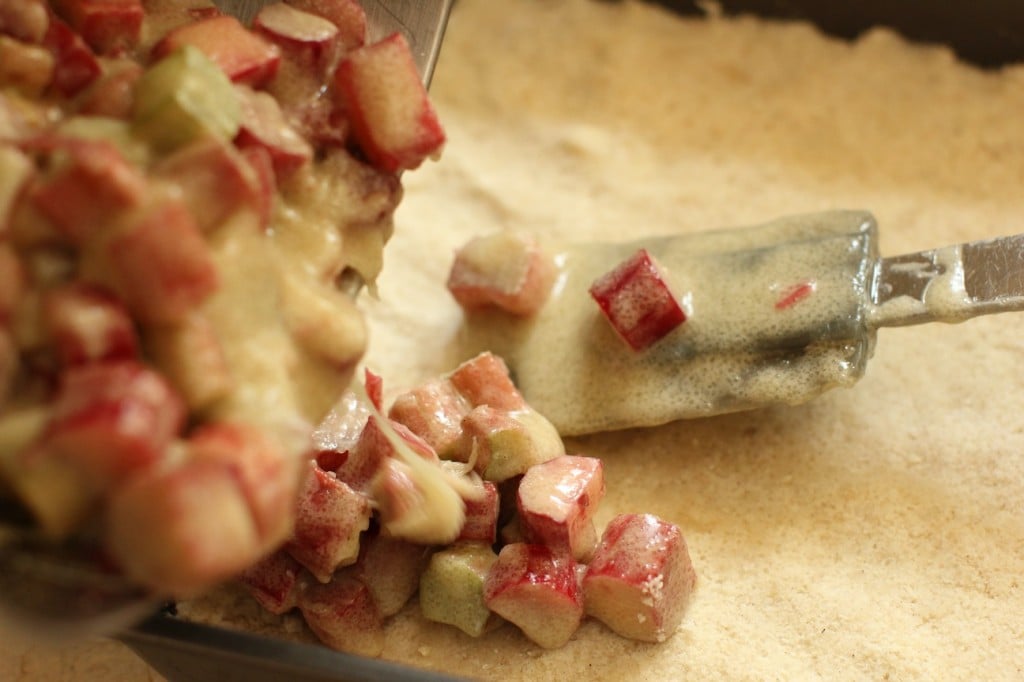 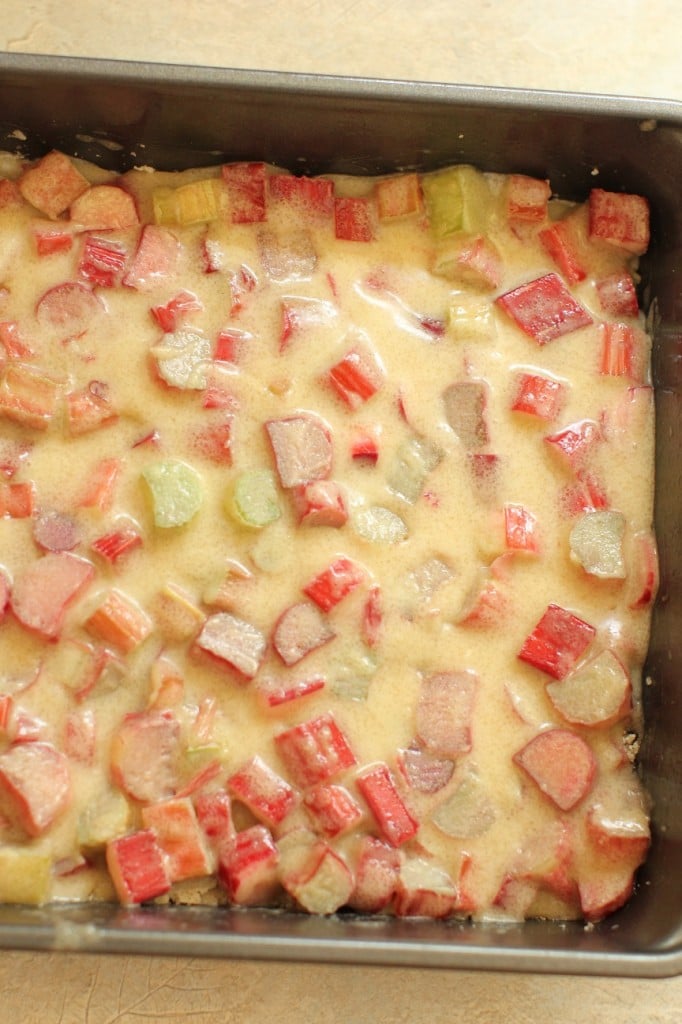 I grow two types of rhubarb in our garden – the regular-sized red rhubarb, and this giant version. I don’t know what variety it is, its stalks are mostly green in colour, very juicy, and the plant is almost as tall as I am. But it’s a bit delicate to move. (One plant died inexplicably when I tried separating it.) 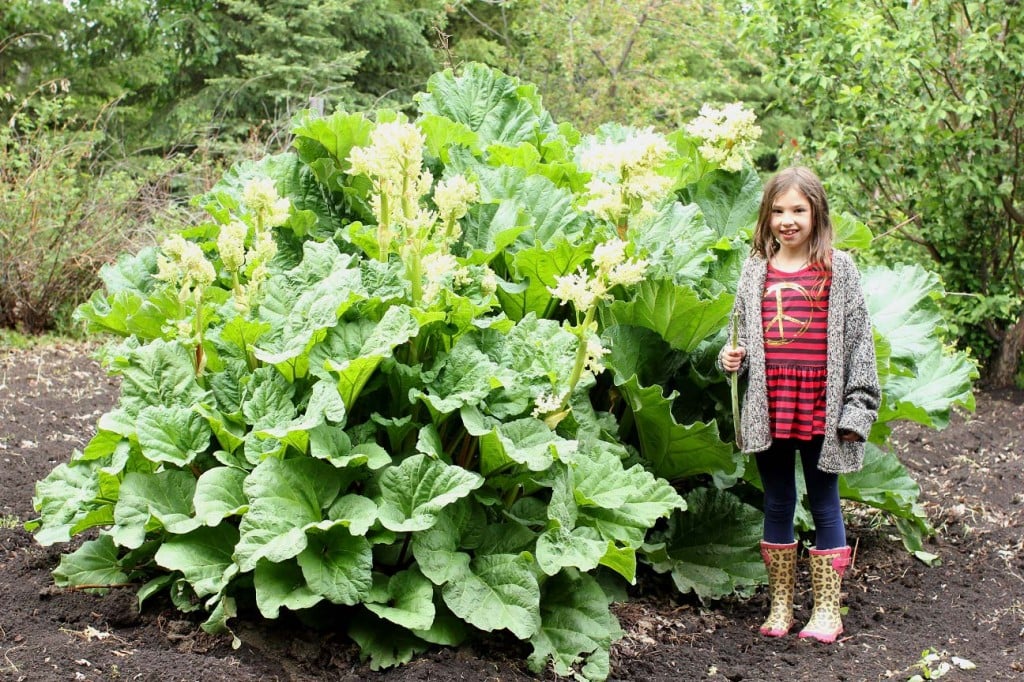 Kitchen Frau Notes: For a gluten free version of my mom’s rhubarb cake I like to use a good proportion of buckwheat flour. I think it goes wonderfully here because buckwheat and rhubarb are part of the same botanical family. I like light buckwheat flour, but if all you have is the dark kind, then use that, or just substitute your favourite gluten-free flour mix in equal proportions for the regular flour.

This recipe makes a 9×13 inch-sized cake. It may seem large, but we never have a problem with this cake lingering more than a couple days on the counter before the pan has nothing but crumbs in it. However if you like, it’s easy to halve the recipe and bake it in an 8×8 inch square pan. Just halve all the ingredients, using half a beaten egg in the base-and-topping portion, and adding the remaining half an egg to the egg for the custard, so that it uses 1½ eggs, and bake for 45 minutes.

Dairy Free: Use coconut oil or dairy-free margarine instead of butter.

Egg Free: Use ¼ cup (60ml) unsweetened applesauce in place of each egg.

Other Fruits: You can also substitute any other fresh or frozen fruits in this cake – raspberries, apricots, plums – yum. Use only 1 cup (200gms) sugar in the filling then. 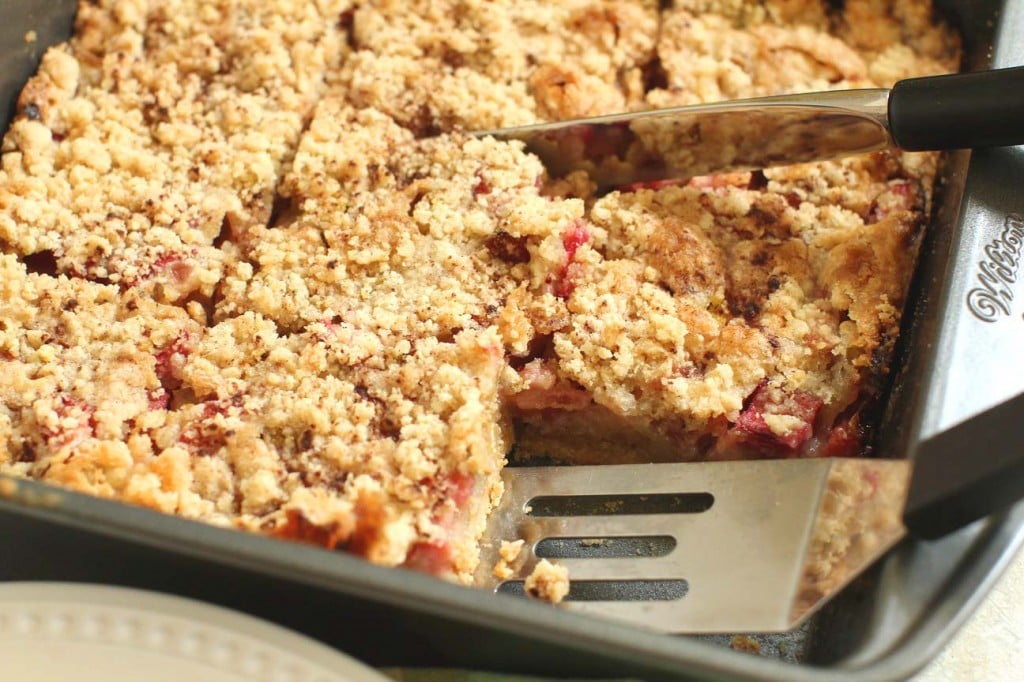 For the base and topping:

For the base: Mix all ingredients for the topping in a mixer or with a pastry cutter until crumbly. Scoop out and set aside 1 cup (240ml) of the crumbles. Press the rest into the prepared pan to make a thin, even crust on the bottom.

For the filling: In a large bowl, beat the eggs with a whisk. Add the sugar, melted butter, flour and vanilla extract. Stir until well combined.

To assemble: Scrape the rhubarb filling onto the prepared base. Use a spatula to spread it out and even it out as best you can.

Spread the reserved crumbs evenly over top, then sprinkle lightly with cinnamon.

Bake for 1 hour. Let cool before cutting into squares.