Taste a forkful of autumn with this moist Apple Buckwheat Cake, rich with pecans, honey, and healthy buckwheat flour, and topped with a crunchy crumble topping. (Skip to recipe.) 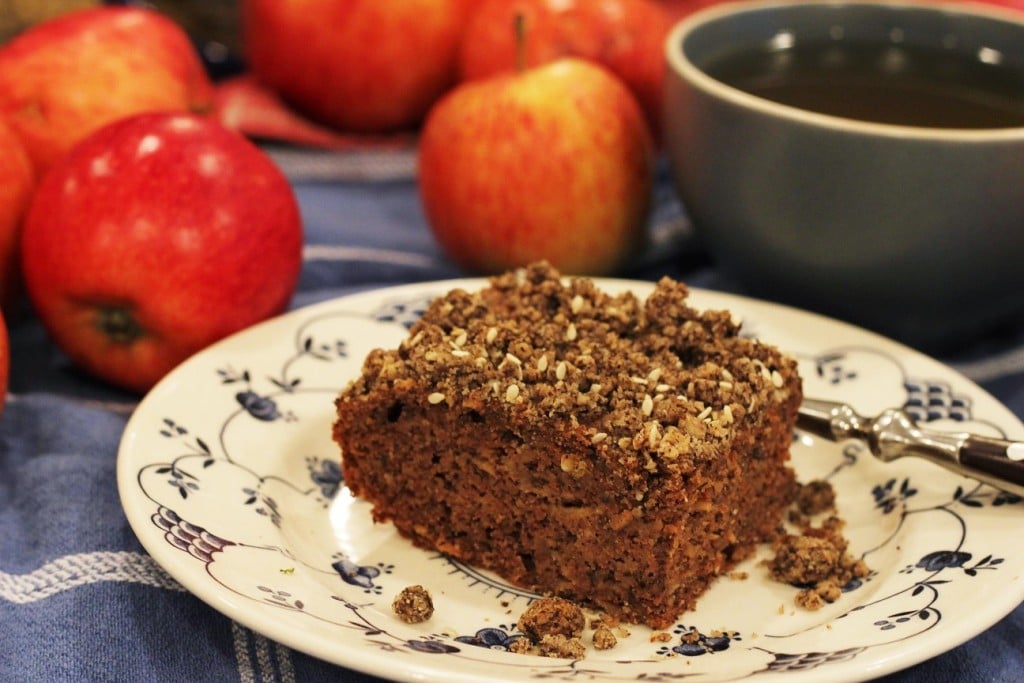 Not only on the calendar, but in the trees and in my garden and on the roadsides and in the air.

And I love it.

I love the crisp feeling and the earthy colours and the misty moisty mornings. There is a richness everywhere that makes the world come alive - one last hurrah before the hunkering-down of winter. The first frosts have come and the next ones are predicted. 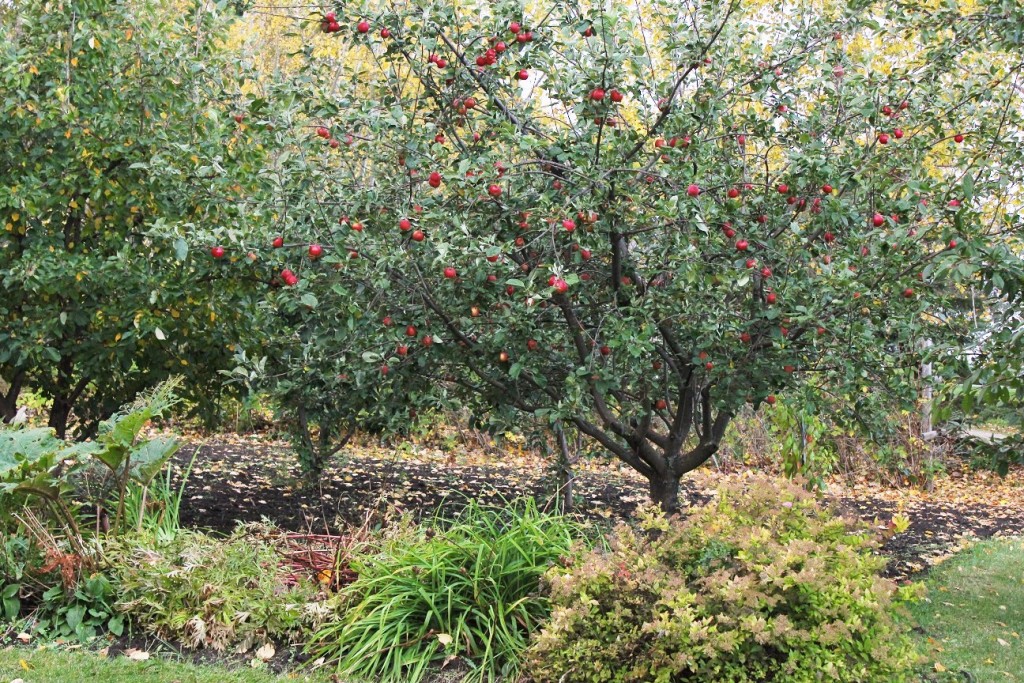 (As I write this, Raymond is outside picking the apples quickly before it gets dark.) Peas and beans are tucked in the freezer. 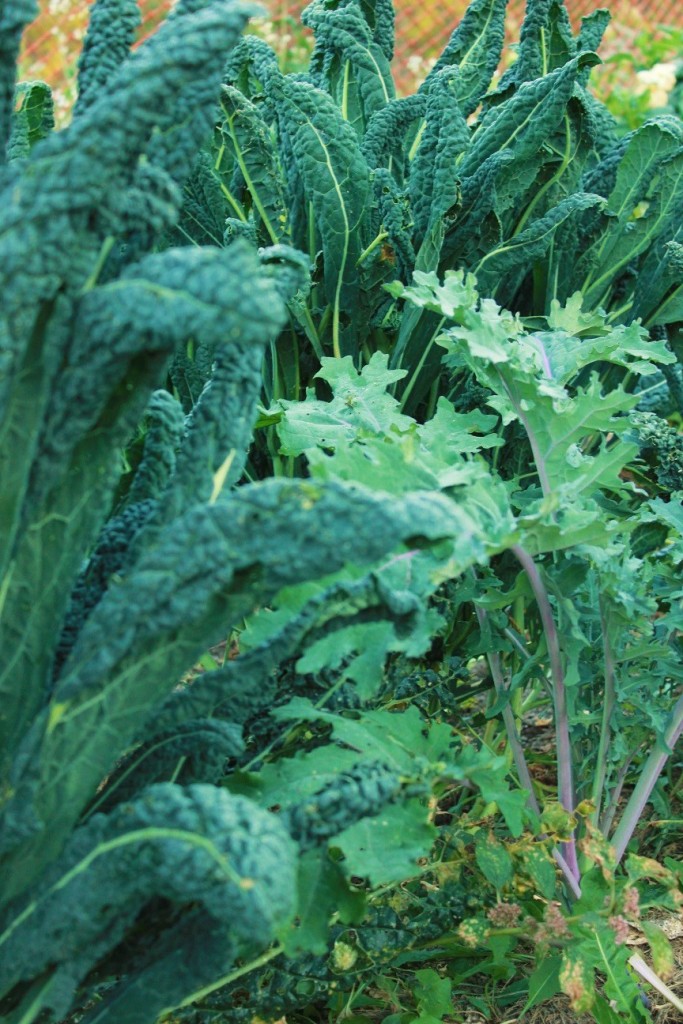 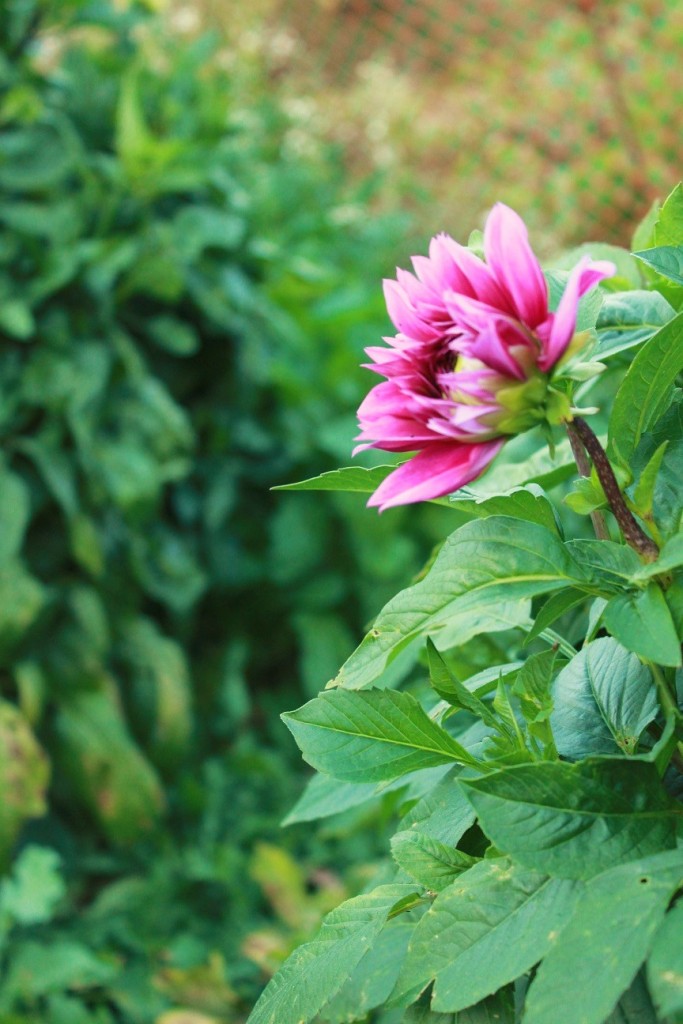 Tomatoes and squashes are harvested and filling pails and wheelbarrows in the garage. Root vegetables are still sitting safe and cool in the soil. 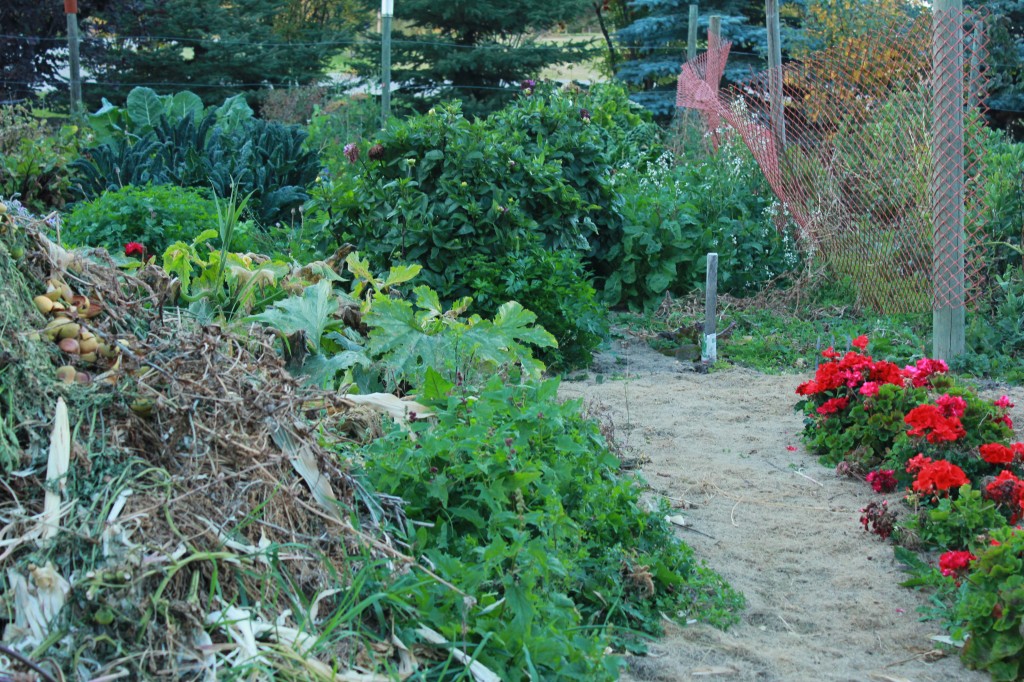 The garden has provided well and deserves its rest.

And we deserve a fall treat. All those crisp red apples sent me to the kitchen and put me in a baking mood, so I spent the last week playing around with this recipe. I think I've got it right. The rate at which the last pan disappeared is a good indicator.

Apples, pecans, buckwheat, honey - all the ingredients of autumn combined in a moist dense cake.  The crunchy and crumbly streusel topping is icing on the cake, literally. It's the kind of cake you can have a big slab of for breakfast and not feel too guilty. . . or with your afternoon tea, or packed in your lunch. 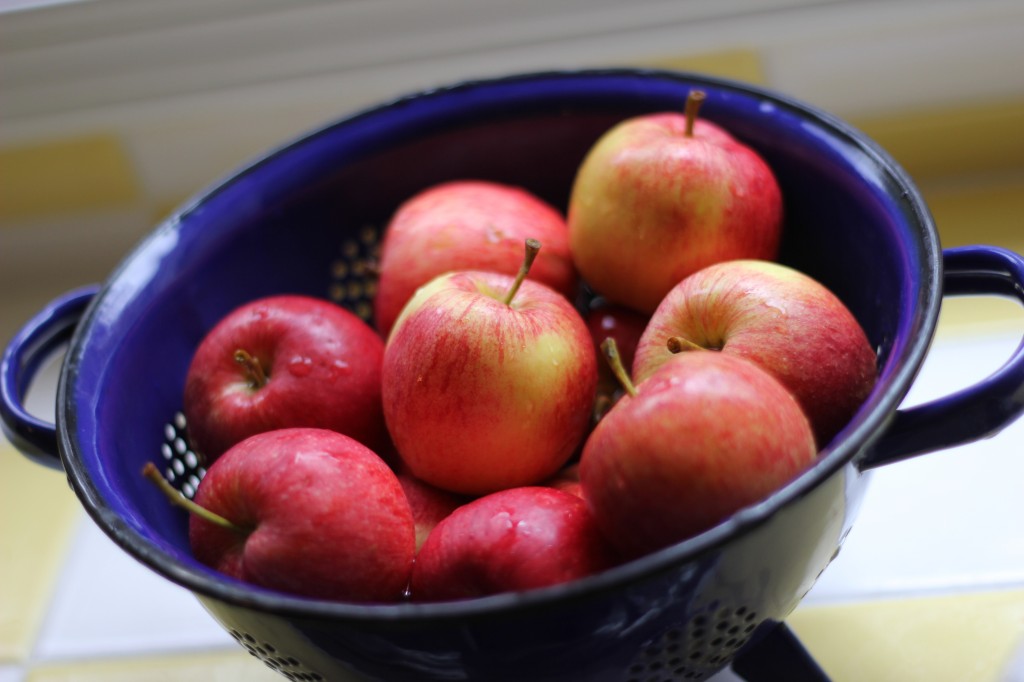 Kitchen Frau Notes: I had buckwheat honey and used that - kinda thought it would go with the buckwheat flour - it added a complex, slightly molasses kick to the cake.

If you keep your nuts in the freezer like I do, make sure to bring the pecans to room temperature before you grind them in the food processor, as they will not grind evenly if still frozen. You can thaw them quickly by sticking them on a cookie sheet into the oven at 350°F for 5 minutes. 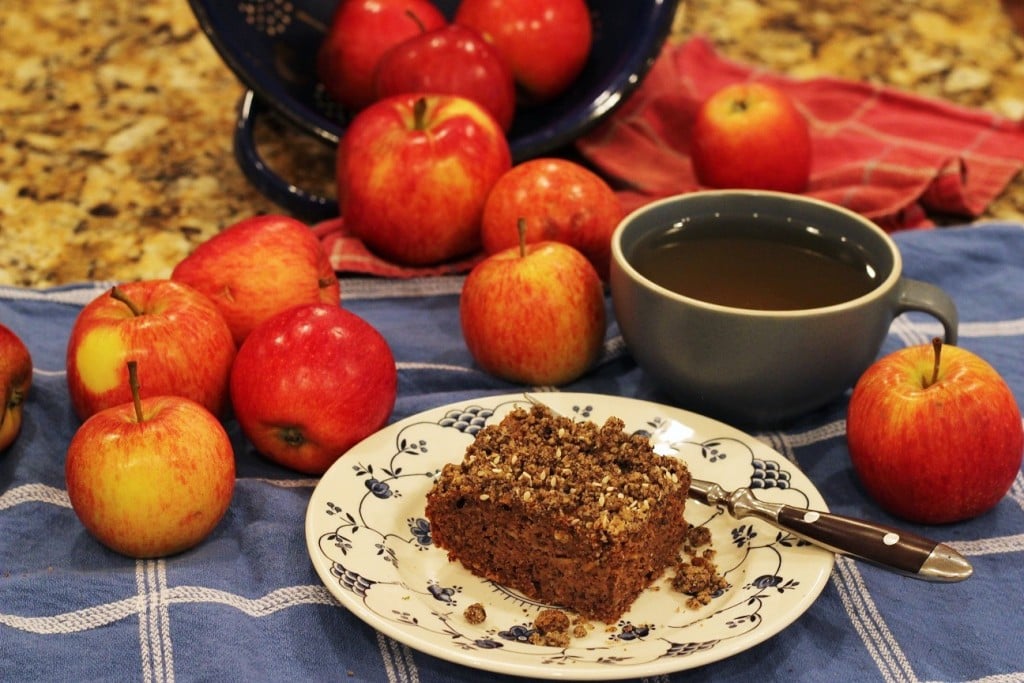 For the Crumble Topping:

In a food processor, grind the pecans until they are fine, but not starting to stick together into a butter.

In the bowl of a mixer (or by hand) whip butter and honey until light and creamy. Beat in eggs, one at a time, until well incorporated, then add applesauce. The mixture will look curdly - that's okay. 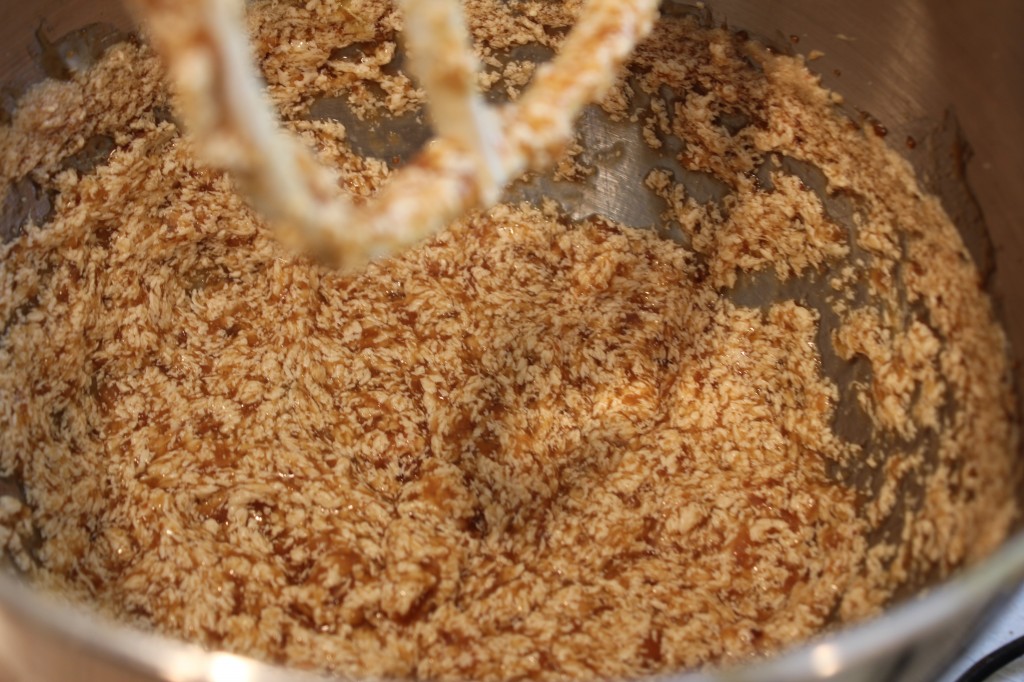 Stir in the grated apple.

Spread the batter into the prepared pan.

Clean the bowl with a rubber spatula, but don't bother washing it because you can now make the topping in it.

Mix all the ingredients for the crumble topping in the empty mixing bowl until crumbly. Spread the crumbles evenly over the batter in the pan.

Bake for 45 minutes, or until a toothpick inserted in the middle comes out clean.

Let cool slightly in pan, then cut into squares. Serve with a dollop of whip cream or ice cream.