Which are the best apples to bake? Follow along with my experiment to find out. Then you can make delicious baked apples with two different choices for fillings - cinnamon-oat or lemon and almond. (Skip to recipes.) 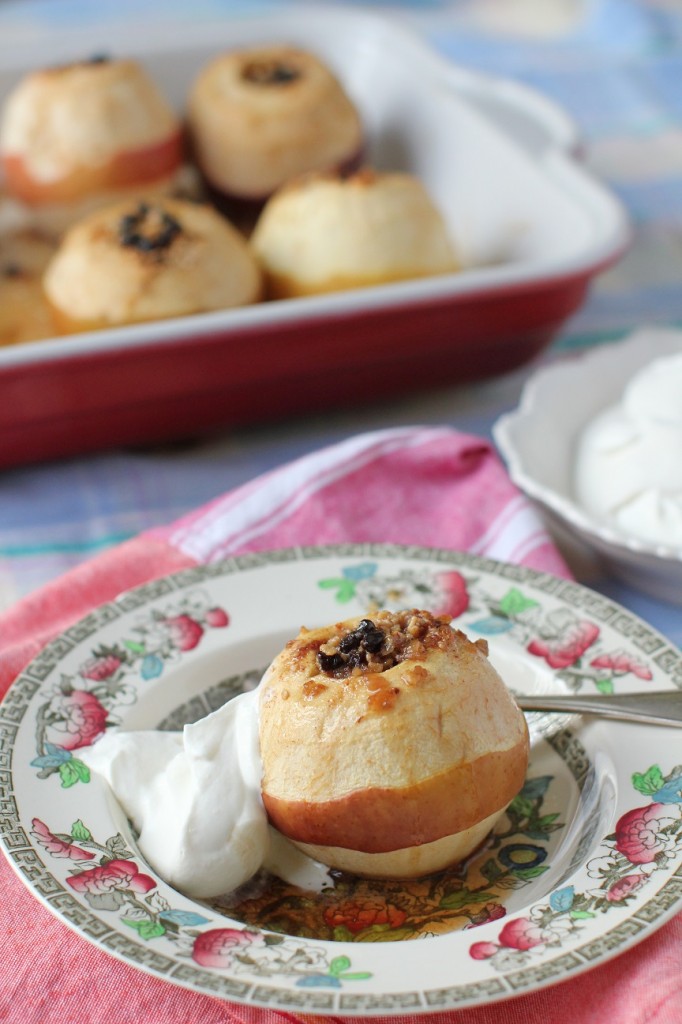 What better way to spend a Sunday afternoon than to play around with a private taste testing of one of my favourite comfort foods - a simple, homey, dessert that evokes a bygone era - the baked apple? It was one of my most beloved desserts as a child.

Today the warm winds are howling outside, bringing an unusual (and very temporary, I'm sure) feeling of spring in the air - belying the two feet of snow still covering the yard. But the sun is shining, the snow is bright and sparkling, and as the wind whips loudly around the eaves, it's cozy inside. A perfect day to turn on the oven and perform the experiment I've been meaning to get to. 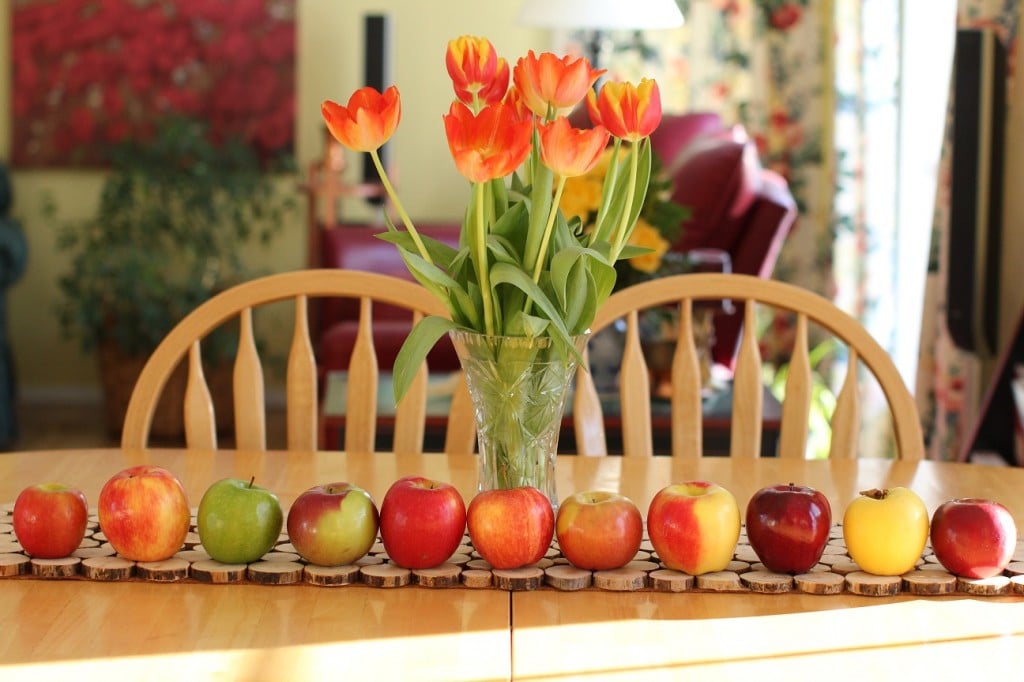 Late in the fall, I went around the grocery stores, collecting as many different apple varieties as I could find, then stored them in our downstairs fridge, waiting for a day like today. I've been meaning to search out which is the best apple variety for baked apples.

I found 10 different varieties, filled them with one of two different fillings, baked them, then handed out spoons and let my very professional, highly trained taste-testers loose on the pans. They were to rate their top 3 favourites, and give me words to describe their tastes and textures.

It all comes down to a matter of taste. Do you like your baked apples soft and fluffy - almost like applesauce? Or do you like them firm and hard, with some crispness to their bite? Or maybe somewhere in between? And do you like the flavour to be mild and honey sweet, or mouth-puckeringly tart, or medium-sweet with a nice tang?

All the apple varieties are yummy, but some are more yummy than others. We found out that some are better as fresh eating apples, and some are wonderful for baking. And since my taste-testing crew was actually quite small (I think three of us doesn't really count as a wide sample), our opinions were easy to tabulate. 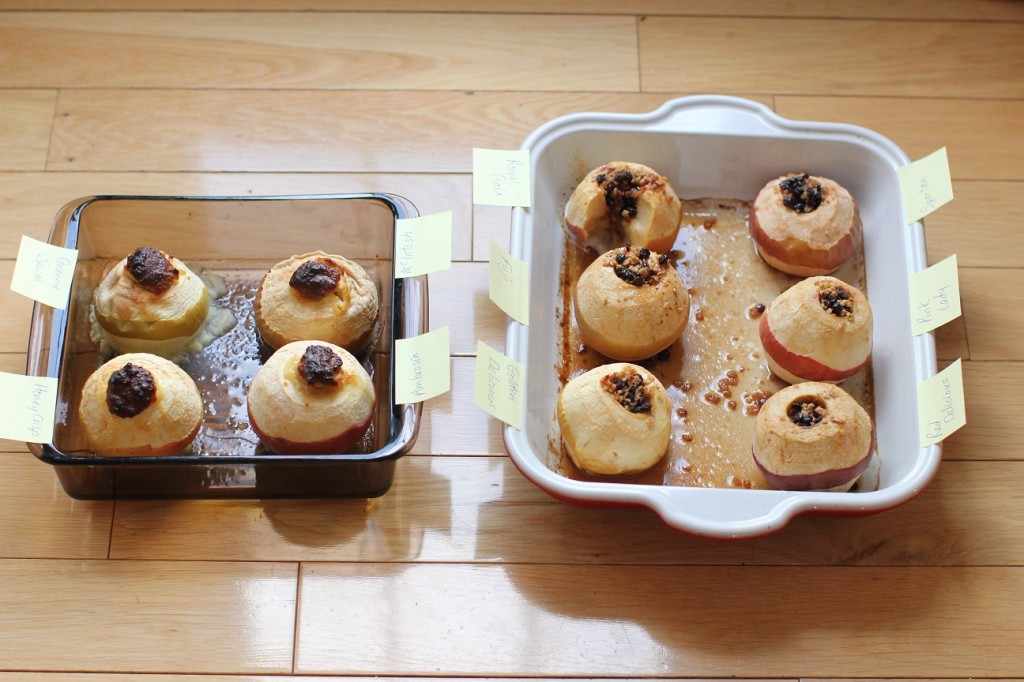 All 3 of us agreed that the Fuji apple was our number one choice, although it was a close contest. I guess we're middle of the road people because we liked that it was in the middle for texture - not too soft and not too hard - and for taste. It was sweet, but had a nice tang to it.

I didn't care for Pink Lady because it stayed super firm, almost crisp, even after one hour of baking, although it did get one vote for third choice (it's those same qualities that make it such a good eating apple). Honeycrisp was almost as firm, too.

McIntosh and Spartan got very soft - almost like applesauce. I actually like that soft fluffiness, and their bit of tartness.

Granny Smith was also quite soft, and very tart - so if you like that super tartness, that's the one to choose.

Ambrosia, Red Delicious and Golden Delicious were also in the middle for flavour and texture, although they were more sweet than tangy. 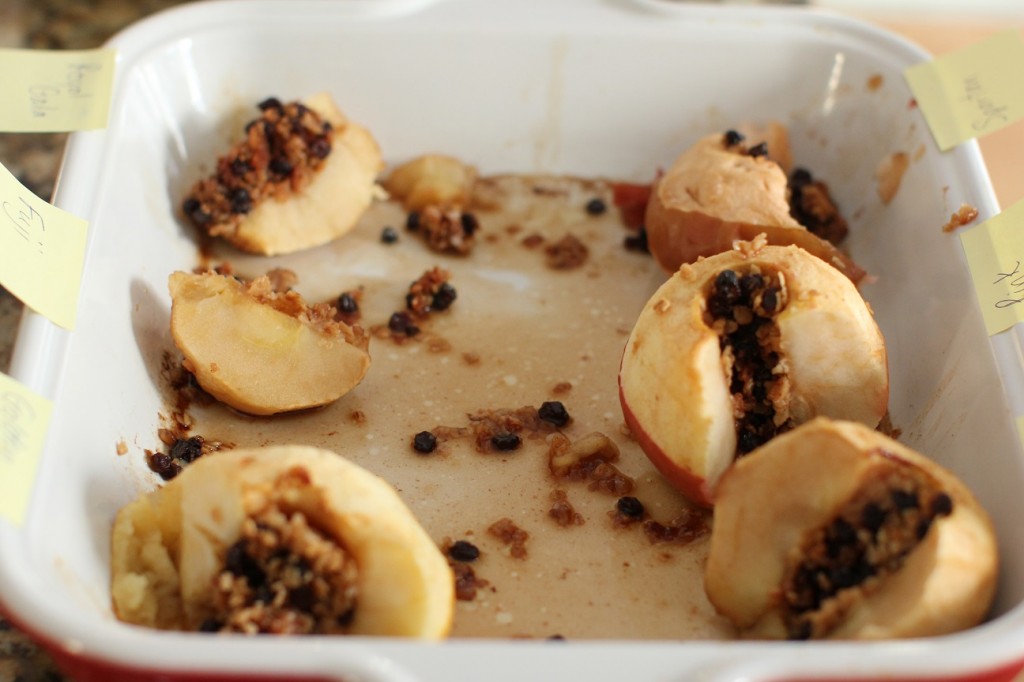 So there you have it. All delicious, but our family votes for Fuji, Royal Gala or Red Delicious apples for baking,  (though I do like the softness of McIntosh or Spartan - reminds me of my childhood, since those were the apples easiest to get in the stores on the prairies).

As for the filling, I made one batch of a traditional cinnamon-oat mixture, and one that was a creamy almond, lemon and honey filling. The guys voted for the traditional filling, and I loved the almond filling. The choice is yours!

Kitchen Frau Notes: The Cinnamon Oat Filling works with either quick oats or large flake oats. I like using currants, because they are smaller and distribute more evenly through the oats, but if you don't have any on hand, raisins or cranberries are good, too. You could always add a few chopped walnuts or pecans to the oat mixture.

The Lemon Almond Filling has a lovely texture and flavour. If it is browning too much, remove the apples from the oven a few minutes earlier. I left mine in for the full hour, because I had one of the harder varieties of apples (the Honeycrisp) in the pan and wanted to see if it would get softer. If using a softer variety of apple, they will be done earlier and the filling won't get so brown. (However, the brown, crispy cap of filling was chewy and delicious.)

Some people like to leave the peel on their baked apples, but I find it stays tough, making the apples not very neat and easy to eat with a spoon. I think it works best to peel most of the apple, just leaving a strip around the middle to help keep its shape intact (especially for the softer-cooking varieties). 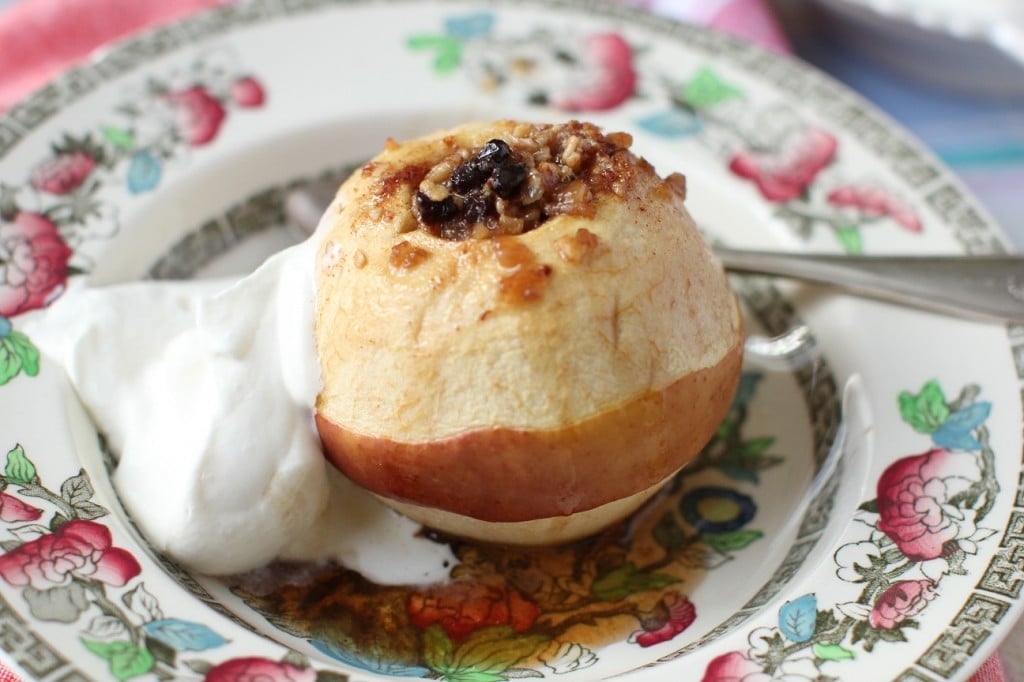 For the apples: Peel the apples, leaving a ¾ inch (1.5cm) strip of peel all the way around the middle. This will help keep the apple together.

Using an apple corer, cut down into the center of the apple, trying not to cut right through to the bottom. Remove the corer gadget from the apple. Use a melon baller, or knife to dig out the core, leaving about ½ inch (1cm) of apple attached at the bottom of the apple. 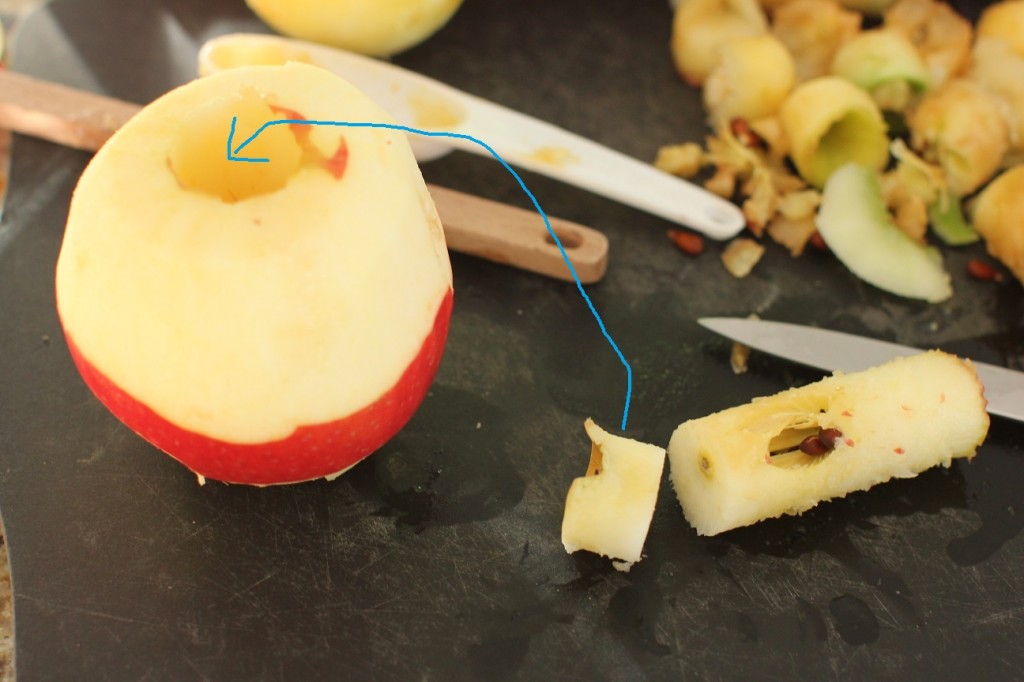 If using the Cinnamon Oat Filling: Stir together the rolled oats, currants, and cinnamon in a small bowl. Fill the core holes in the apples with the mixture. If there is any left over, sprinkle it around the apples. Pour 1 teaspoon of brandy or whiskey, if using, over the oat mixture in each apple. Drizzle 1 teaspoon of maple syrup over the oat mixture, trying to get it to soak down into the oats. Place a 1 teaspoon blob of butter on top of each apple. Drizzle a bit more maple syrup over each apple.

Pour enough water into the pan, around the apples, to cover the bottom of the pan by ¼ inch (½cm).

If using the Lemon Almond Filling: Stir together the almonds, egg yolk, honey and lemon zest. Divide among the cavities of the apples, mounding it up slightly if there is extra. Pour enough water into the bottom of the pan to cover it by ¼ inch (½ cm). 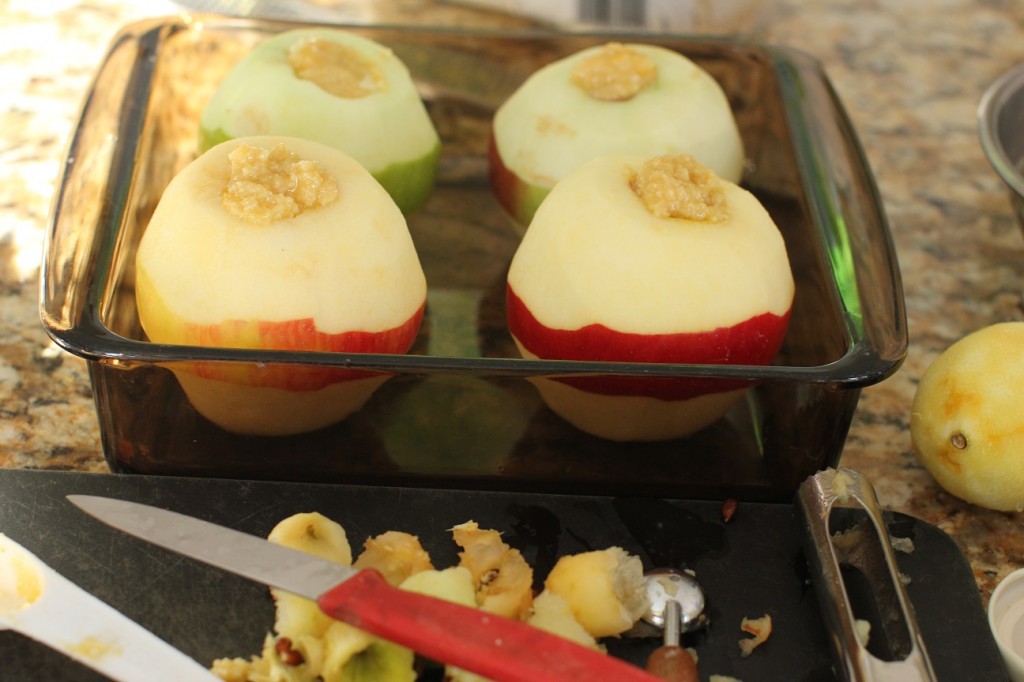 Bake the apples for 50 to 60 minutes, basting them with the pan juices after about 30 minutes, until they are tender when pierced with a fork. The tenderness of the apples will depend on the variety - some varieties never get really tender when baked, and some get very soft and fluffy. 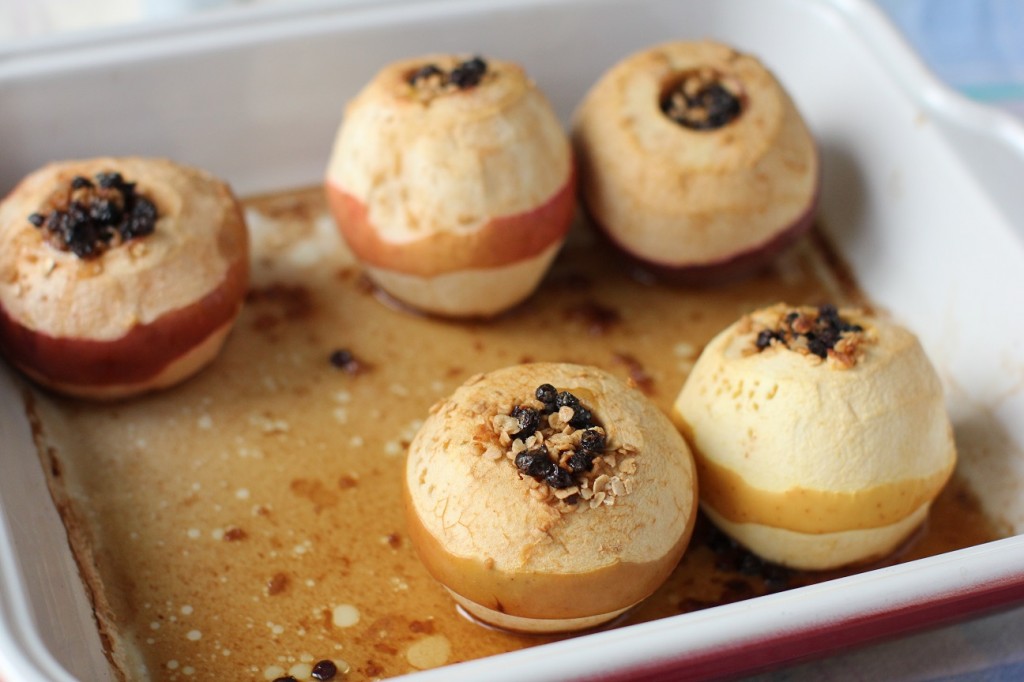 Serve warm (don't forget to add some of the sweet juices to each dish) with ice cream, a dollop of yogurt, or whipped cream that has been sweetened with a touch of maple syrup. Or just pour a puddle of cream around the apple, like we did when I was young. (You could also use full fat canned coconut milk, whisked smooth.) 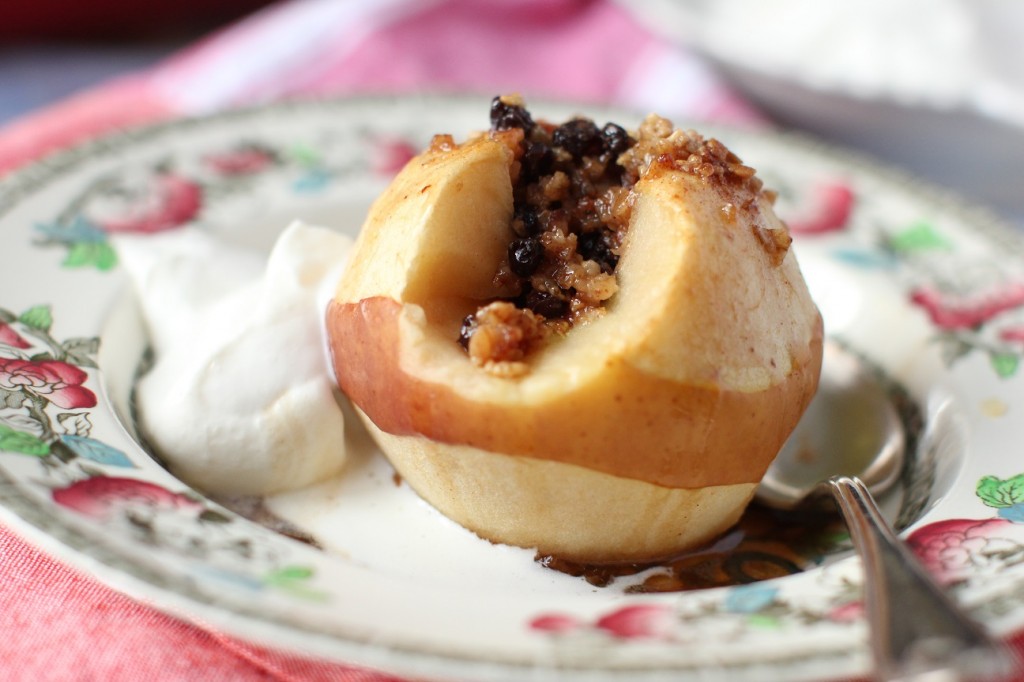 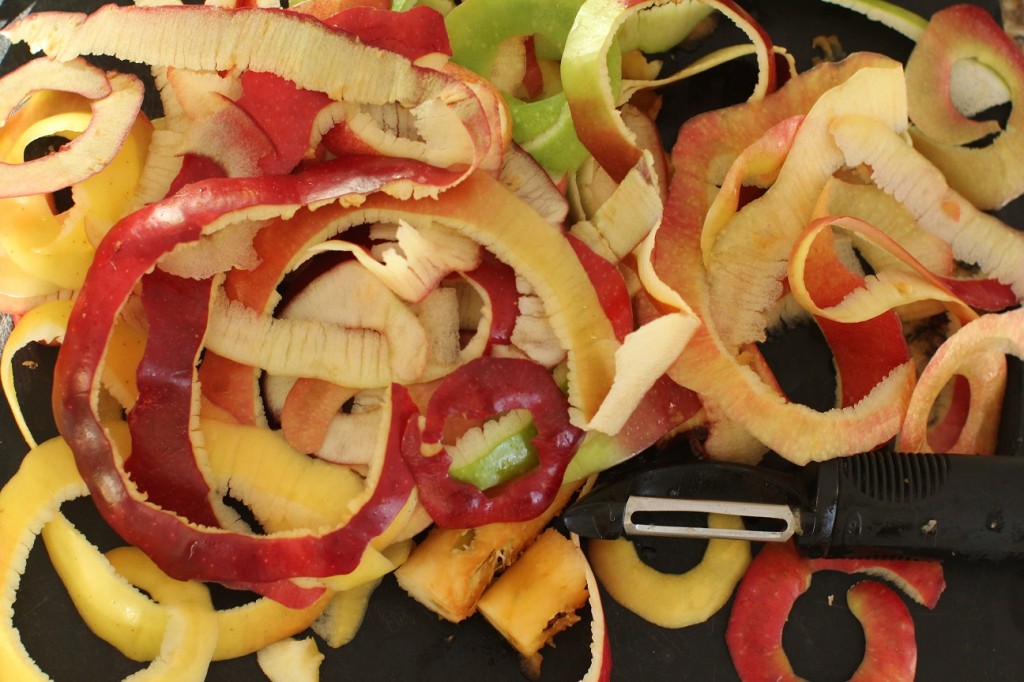