Fruit juice jelly with chunks of fruit, topped with a tangy yogurt sauce is a simple and healthy replacement for packaged gelatin mixes. (Skip to recipe.) 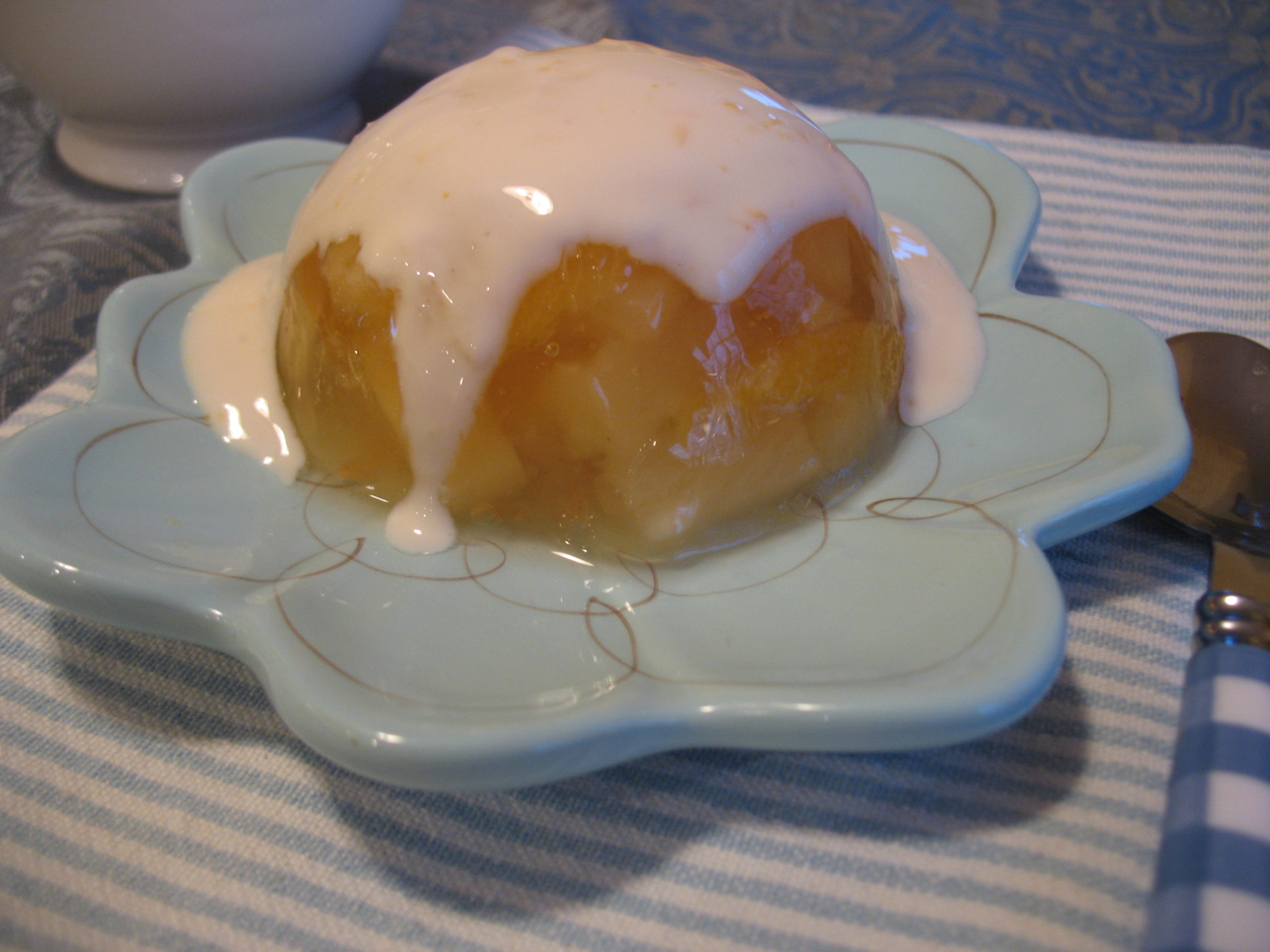 Jellied fruit salad is one of those nostalgic foods of my childhood, not necessarily for any gourmet qualities it possessed, but for the association with fond memories. It's one of the first dishes my sisters and I were able to make 'all by ourselves' once we reached the age, or rather height, where we could reach the kitchen countertops and were allowed to boil water. It was like playing a grown-up kind of house, to empty the flavoured powder out of the box and into a bowl, pour in the boiling water and stir to dissolve the crystals. The mixture turned into a bright jewel-toned liquid (nowhere near to resembling the food it was supposed to represent), which had to be taste-tested by our willing, slurping mouths. Then we got to handle the can opener to open a can of fruit cocktail, which was dumped into the brew. The bowl was put into the fridge to set. If we remembered to halt our play to periodically stir the thickening gel, we'd be rewarded with a beautiful bowl of evenly dispersed fruit suspended in the jellied juice. If not, all the fruit would be floating at the top, but the end result was no less yummy.

Jellied fruit salads popped up everywhere in childhood days - at potlucks and church suppers, for salads or desserts, in our school lunches and after-school snacks, in Tupperware bowls or unmolded in stately, shimmering, splendor. The jelled mixture was often mixed with other ingredients, both sweet and savoury - mayonnaise, cream cheese, chopped nuts, celery or carrots, marshmallows, or sliced green onions, in endless variations to make a endless variety of salads. I never cared so much for those, but I did love that simple variation with canned fruit. 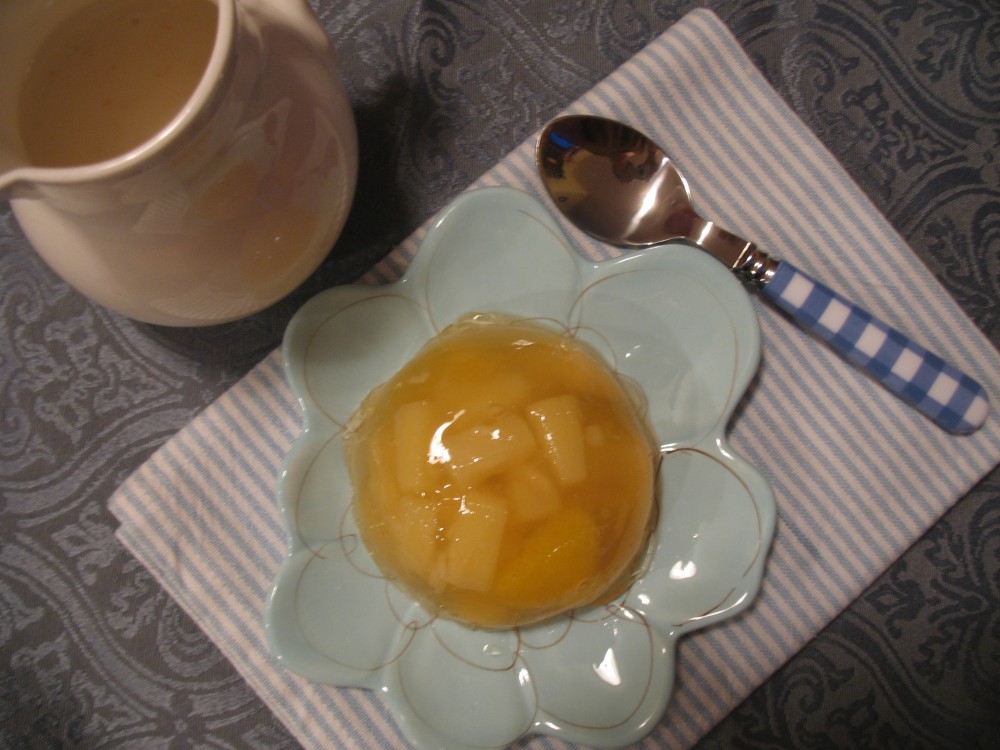 My most intense memory involving jellied fruit salad, was when I was about 14. My mother, with my littlest sister and I as passengers, was driving us to a 4-H potluck dinner. We had our jellied salad, in its plastic-wrap covered bowl, sitting on the console of our little blue truck. We hit a very muddy section of the gravelled road we were traveling, and the truck flew out of control. It did a complete roll-over in the ditch and landed back upright. The roof of the cab was crushed and the damage to the truck was extensive. Luckily, my mother, sister and I only suffered some cuts and bruises from the broken windshield and the fact that we had no seatbelts (they weren't mandatory in those days).

As we collected our shaking selves together after the accident, we noticed the bowl of jellied salad still sitting in its same spot on the console of the truck. There were a few crumbles of windshield glass plopped onto the plastic wrap, but the salad was unscathed. . .survived due to the physics of centrifugal force. Indestructible.

I don't remember if we ate that jellied salad, or if we even made it to the 4-H function. I do know a kindly trucker picked us up and gave us a ride home. And I still have that image of the jellied salad bowl sitting there intact, inside the shattered truck.

But I digress. I did say fond memories, and in a weird way, that was a fond memory (I was at the age where I didn't concern myself with the cost of replacing the vehicle, or the close brush with serious injury - just the 'coolness' of having been in a roll-over and having a tale to tell my friends).

Anyway, fast forward to adulthood and jellied salads. As a mother interested in good nutrition for my children, I found it extremely difficult to feed them the chemically flavoured and coloured packages found on the store shelves. I found it almost as quick, and much more nutritious, to add gelatin to fruit juices and stir in some fruit. The idea is the same, but the taste is so much better. And you can be creative with what you had on hand. Serve it with a simple fruity yogurt sauce to turn it into a tasty dessert.

Just remember that some fruits, like fresh pineapple and kiwi, have enzymes that prevent the gelatin from setting, so as long as you use canned or cooked pineapple you are okay. Plain gelatin can be purchased at the health food store, or at the grocery store in boxes containing envelopes with one tablespoon of gelatin - the amount to set 2 cups of liquid. I like to use a little more gelatin when I am adding a little extra juice (like from the orange in this recipe) and also when I want a firmer texture so I can unmold the individual servings. I just use the extra gelatin from a second packet, then paper-clip it closed to use it the next time I make jellied desserts.

Go crazy and play with different combinations of fruits and juices. Bring back some childhood memories in a grown-up way. 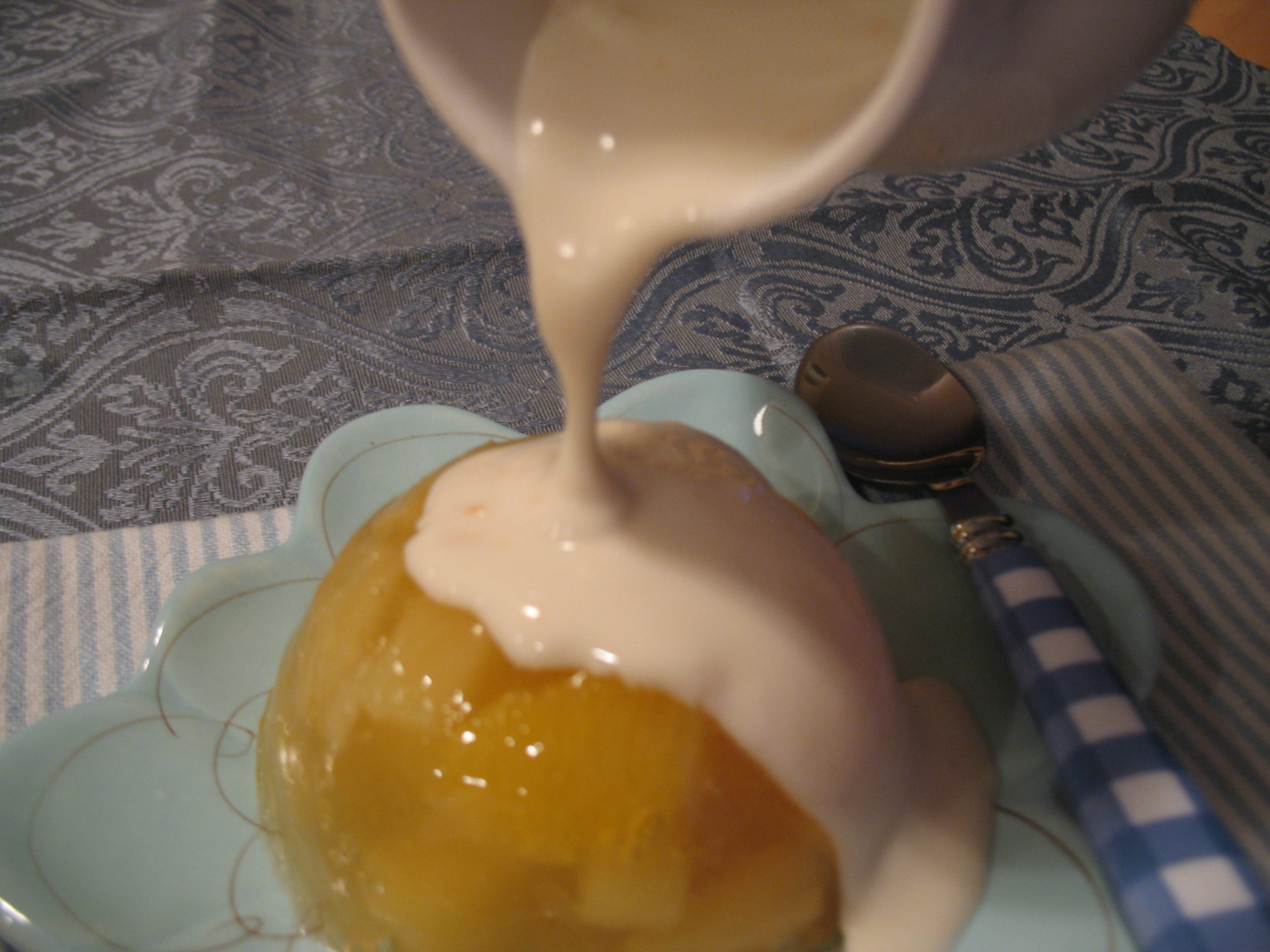 Open tin of pineapple and set in a sieve over a bowl to strain, reserving juice.

Put ¼ cup (60ml) of the white grape juice into a small bowl and stir in the gelatin powder. Let soften while you heat the remaining 1¾ cup (440ml) of juice, in a saucepan on the stove, to hot but not boiling. Remove from heat and stir in the softened gelatin until it is dissolved. Let cool to room temperature. (You can speed up the process by setting the saucepan into a larger bowl of ice water, or if it is winter, set the pot right out in the snow - and protect it from the dog!)

While it is cooling, grate the orange zest from the orange and reserve for the sauce. With a very sharp knife (this is imperative, or you will just mangle the orange) cut the peel from the orange. Start by cutting a slice from the top and the bottom of the orange, then setting it on a cutting board and slicing down the sides, making sure to remove all the white pith. Then  hold the peeled orange over a bowl to catch the juices and carefully cut down each side of the membranes to remove the individual sections. Slice each section into several pieces, about the size of the pineapple tidbits, and squeeze the remaining insides of the orange over the bowl to catch every last bit of flavourful juice.

Stir the drained pineapple pieces, the orange sections and the juice from the orange into the cooled gelatin/juice mixture. Chill until slightly thickened - about the consistency of raw egg whites. Stir to distribute the fruit.

Pour the mixture into 6 - ¾cup bowls or baking dishes. Refrigerate for at least an hour or until firm.

Make the Orange Yogurt Sauce - In a bowl, stir together the greek yogurt, reserved juice from the drained pineapple, orange zest, honey and vanilla.

To unmold the jellies, run hot water quickly over the outside of the dish and invert onto a plate.

Drizzle the sauce over the unmoulded jellied fruits.

Mangoes and Blueberries in Yogurt Cream