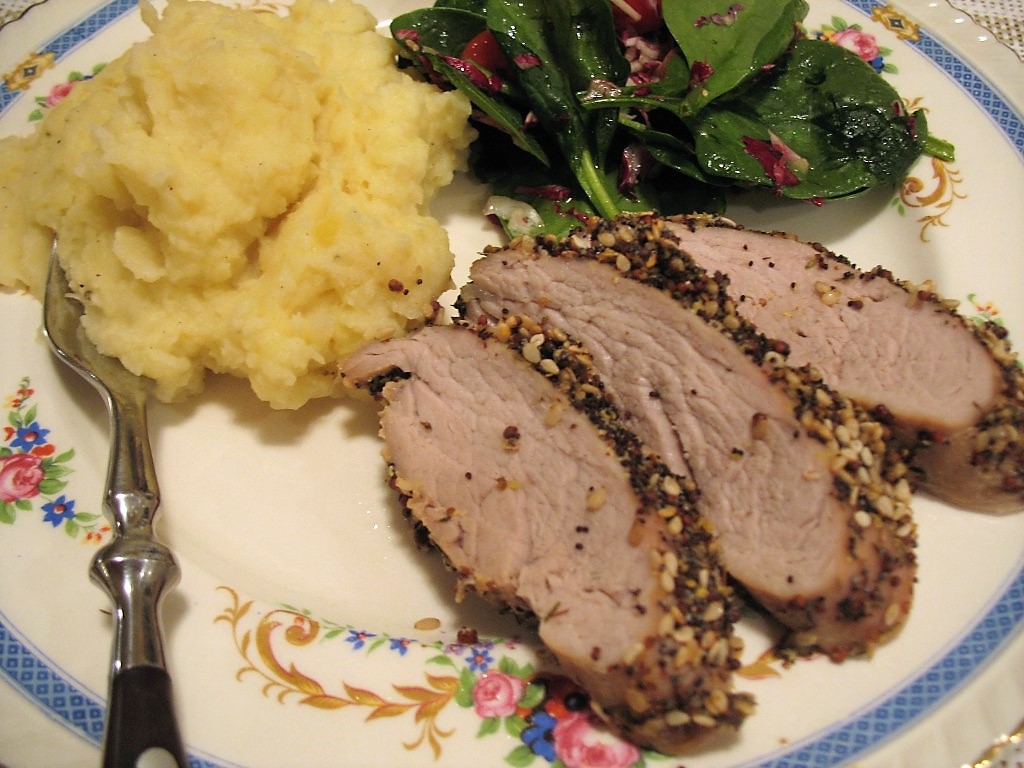 Last night's dinner was exactly what I was thinking about all day long. You know - one of those days when all you can think about is the next meal? Maybe you don't have them, but I am afflicted with them.

I used to think I was the only one so crazy-obsessed with food, until I entered the world of food blogging and realized I was not alone out there. There were other people who seriously thought about food all day long, not from a survival point-of-view (which would make much more sense) but from a purely hedonistic point-0f-view, from an I-love-the-taste-and-smell-and-feel-and-look-and-even-sound-of food. This involves the reading and discussing and planning and shopping and preparing and adjusting and readjusting and finally-eating and then-remembering and deliciously-sighing-about food.

Yes, that was me yesterday (and most days).

I wasn't working yesterday, but I had laundry to fold,  errands to run, and writing to do.  Andreas was going to be gone for the whole day (to the LMFAO concert with friends - he was one excited fifteen-year old) and Raymond and I were going to be home alone for supper (I grew up calling it supper, not dinner, so forgive me for slipping that in occasionally). My original supper plan was leftover pasta from the night before, but - hey - why not make it a special meal - kind of a date night? Especially because we would be spared the usual accompaniment of body noises, inappropriate jokes and generally disgusting table-talk subjects that are strangely unique to teenage boys. Much as I enjoy our lively and engaging dinner times when he, and also the rest of the crew, are home, this was a chance to be at a grown-ups only table.

So I happily mulled and planned all day long. (Much more fun than all the other things I had to do.) I knew I wanted to do something with pork tenderloin. It would be elegant, but also quick and flavourful (not to mention relatively healthy). A beautiful, melt-in-your-mouth tenderloin doesn't need much adornment. But I had seeds flitting around in my head, and the ever-present mustard kept popping up and demanding to be included, too. 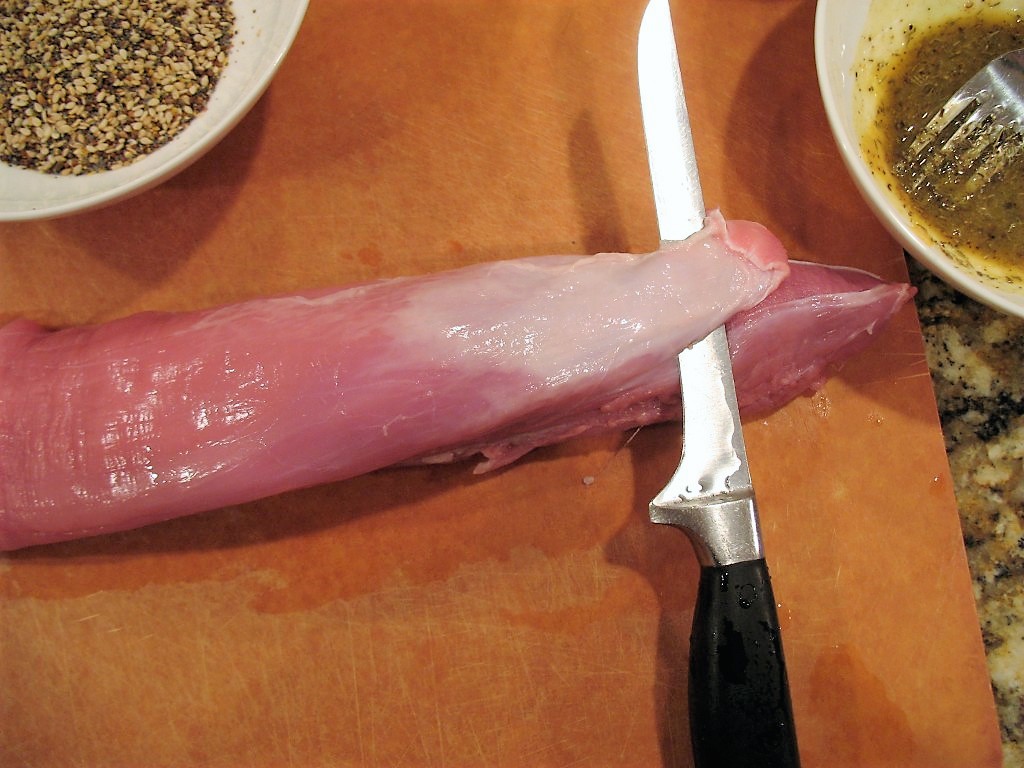 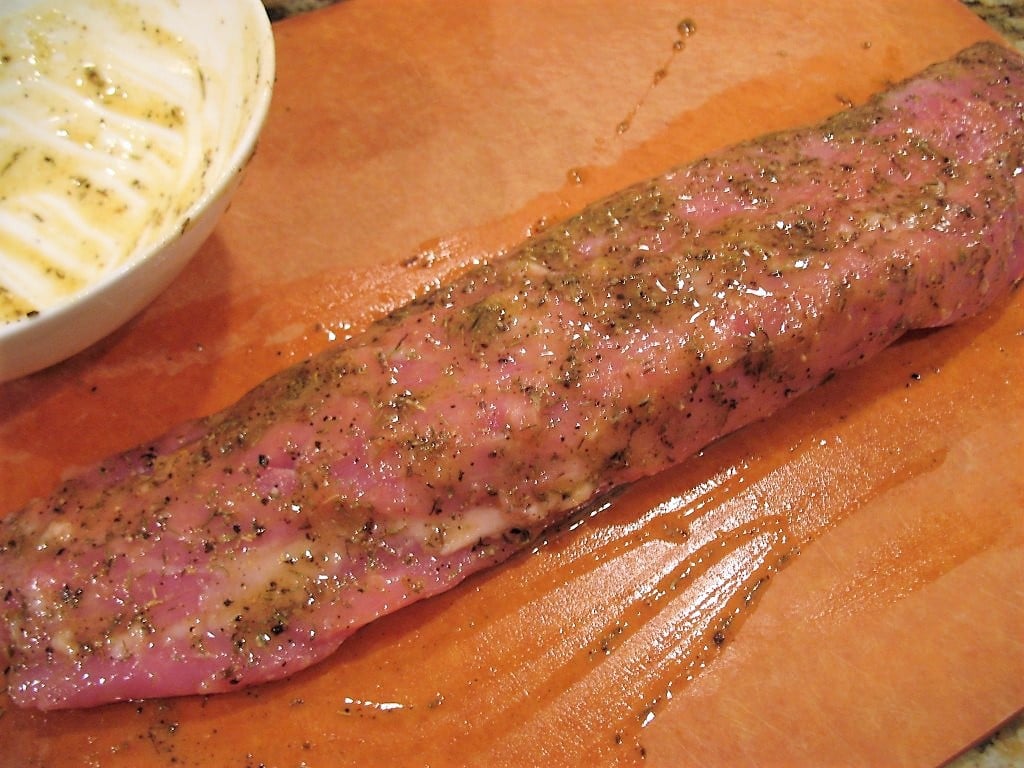 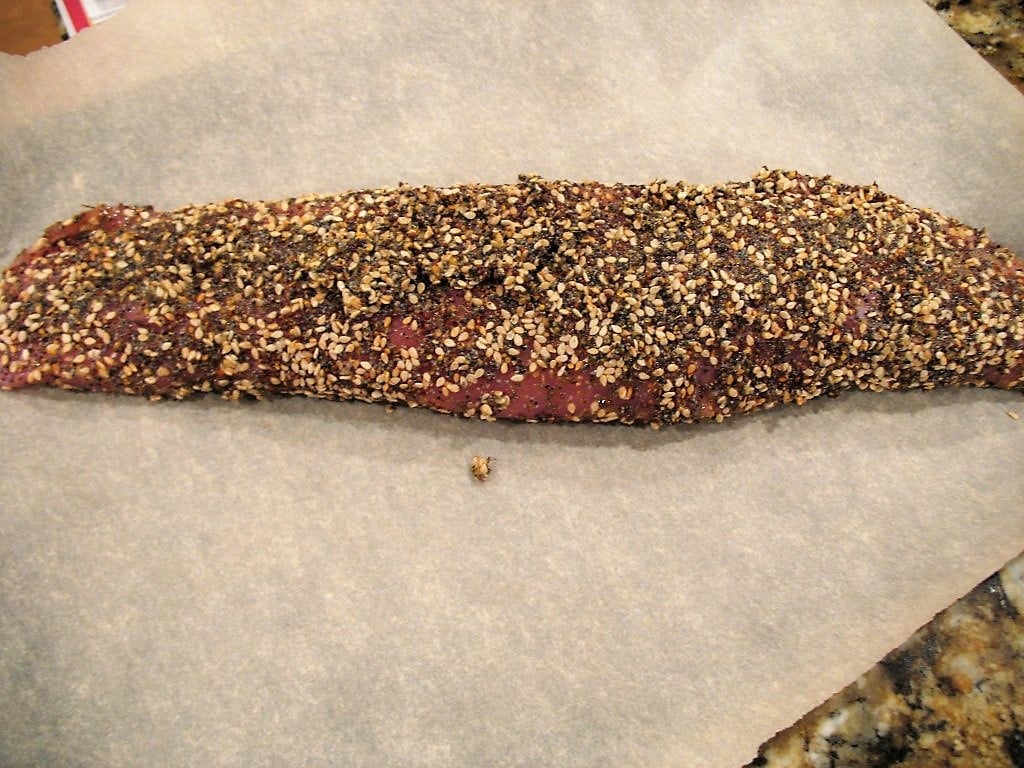 Yes, that would be it: a honey-mustard smeared pork tenderloin encrusted with a textured mixture of seeds. Mmmm. And to go with it - something sweet. Pork goes very nicely with sweet. 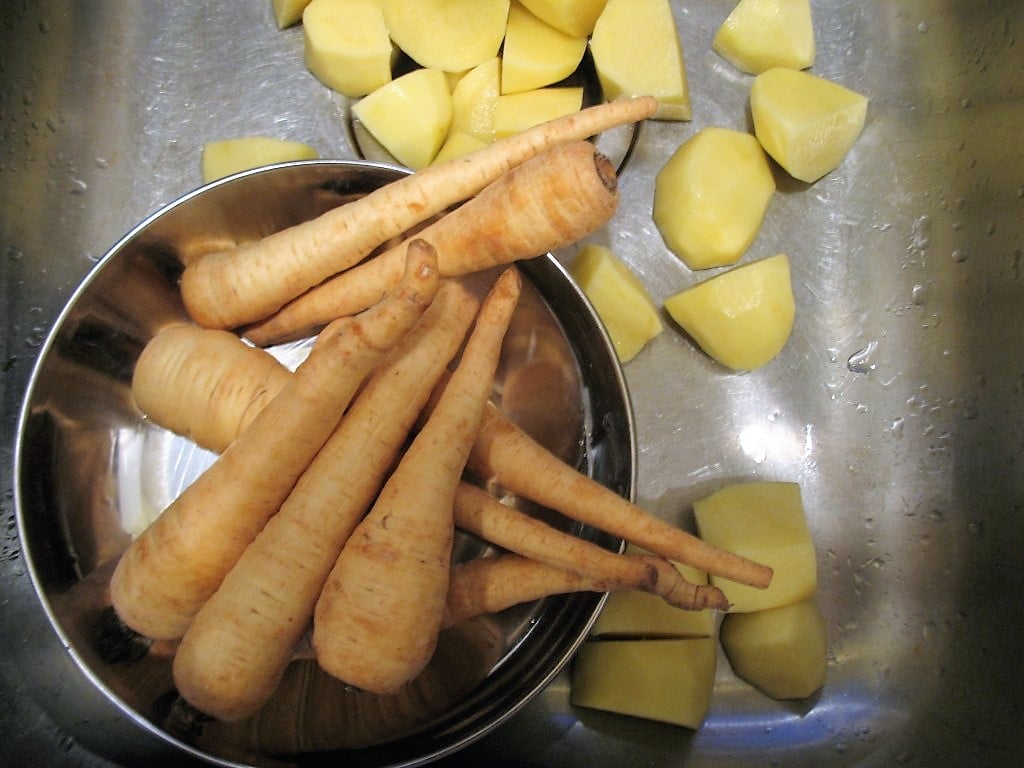 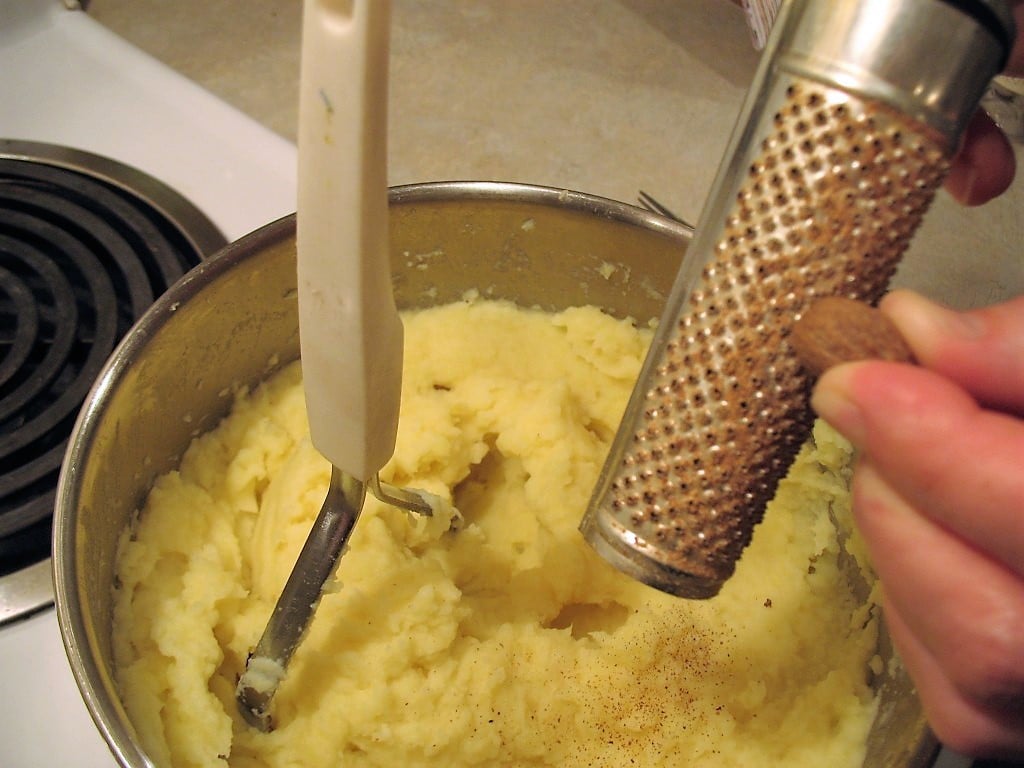 Some people love 'em, some hate 'em. I love, love, love 'em. So if I mashed them with potatoes, that would fancy up those spuds right nice, plus combine the veggie and the starch. Bingo - two in one.  A crisp and fresh green salad on the side would complete the meal.

Dinner was served. Added a nice glass of red - a Malbec - and our weeknight dinner was moved to a whole new realm. (And we didn't even talk about anything gross or disgusting - not even once.) 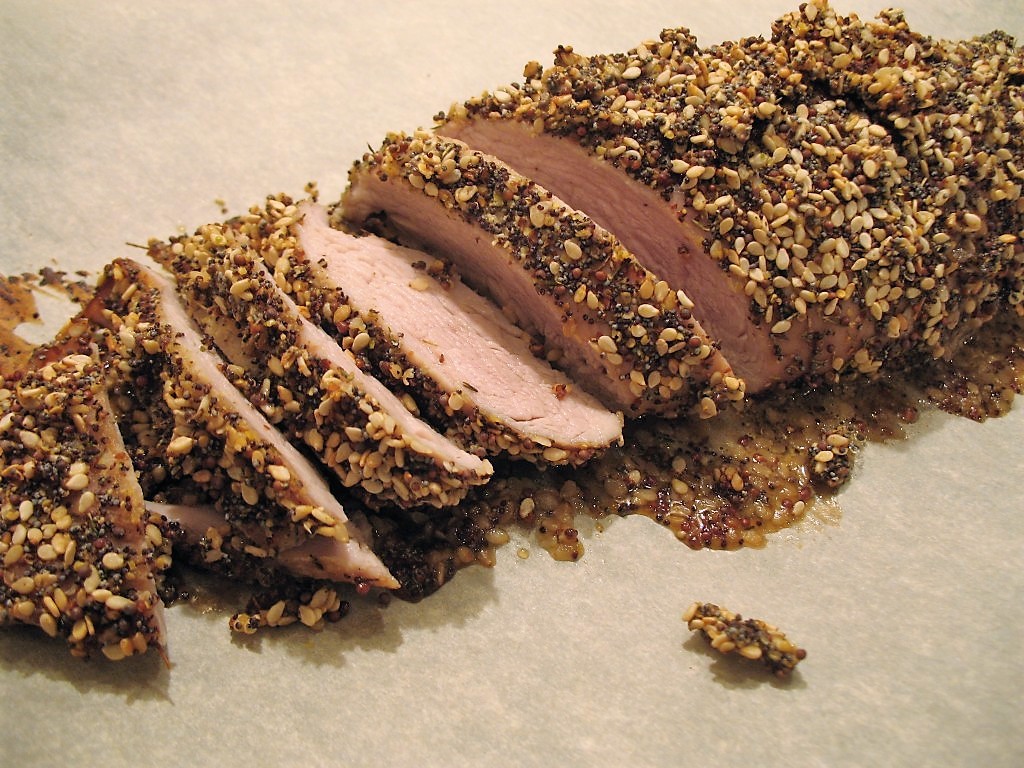 The tenderloin won rave reviews from my honey - the crunchy seed crust added texture to the moist meat, with just the right nuance of sweet and sour from the honey mustard. We shamefully polished off much larger-than-proper portions of both the meltingly tender pork and the creamy parsnip potatoes.

Kitchen Frau Note: If you are on the other side of the divide and really don't like parsnips, just omit them and make the mashed potatoes with the butter, milk and nutmeg, or even just use half the amount of parsnips for a milder taste. 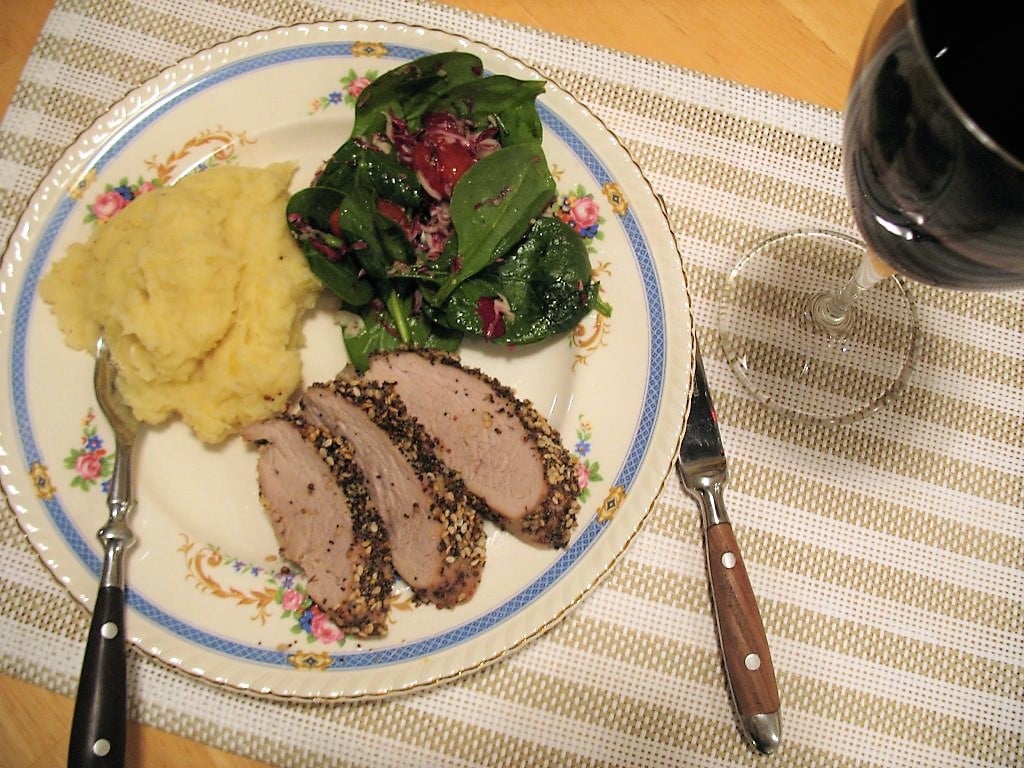 For the Parsnip Mashed Potatoes

Get out a small cookie sheet or baking pan large enough to lay the tenderloin on without bending it. Line it with parchment paper or tin foil.

In a small bowl, stir together the mustard, honey, thyme, salt and pepper. Set aside.

Lightly crush the mustard seeds in a mortar and pestle, if you have one. (If you don't - just leave 'em whole.) In another small bowl combine the poppy seeds, crushed mustard seeds, and sesame seeds. Set aside.

Lay the pork tenderloin onto a cutting board with the silverskin facing up. The silverskin is the white tendon-like sheath on one end of the tenderloin. Slide a sharp knife underneath it and run it along, just under the silverskin, to remove it. No need to get it all off, just remove the bulk of it, whatever you can slice off with one swipe of the knife.

Next - the fun part - take your hands and rub the honey-mustard mixture all over the pork tenderloin.

Then sprinkle on the seed mixture, turning the tenderloin to coat it on all sides with the seeds. With your fingers, press the seeds into any bits that aren't totally covered. Carefully lift the seed crusted tenderloin onto the prepared baking pan, laying it diagonally if you need to. Scoop any remaining seeds from the cutting board and pat them onto the top of the tenderloin. Set it aside to marinate, while you prepare the potatoes.

Peel the potatoes and parsnips and cut them into roughly even chunks. Place them in a saucepan with lid and add about 1 inch (2cm) water to the bottom of the pot. Cover and bring to a boil.

Place the tenderloin in the preheated oven and set the timer to 20 minutes.

When the potatoes come to a boil, turn the heat to a simmer and cook until they are tender when pierced with a fork, about 20 minutes. Drain, then mash the potatoes. Add the butter, milk, nutmeg, salt and pepper. Keep warm on low heat until the tenderloin is done.

Insert a meat thermometer into the tenderloin and add more cooking time if you need to, until it reaches 145ºF/62.8ºC. It will still be slightly pink inside. Remove from the oven and let it sit for at least three minutes to reabsorb the juices. Cut across the grain into slices.

Serve with the mashed parsnip potatoes topped with a pat of butter and a green salad.

The meat serves 2 to 3, (the recipe easily doubles to serve more) while the potatoes should serve 4 to 6 (I'm embarrassed to show you how few we had left over - what can I say - we were raised on the farm).