Crab and water chestnut make a tasty filling for stuffed potatoes. Fill baked potatoes with the mixture, cover with cheese, and bake again. (Skip to recipe.) 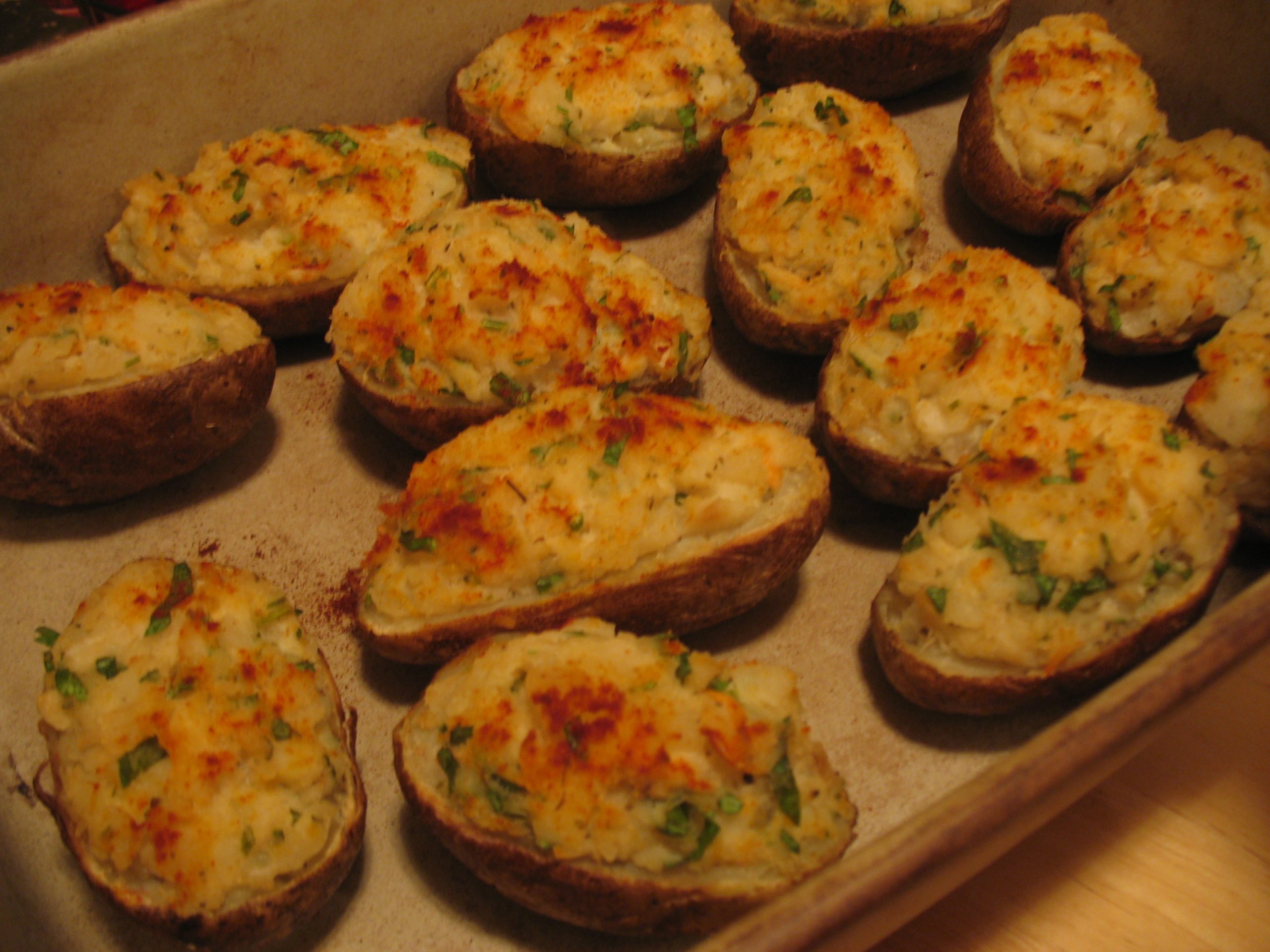 Brrr..... As the weather dips down to -33°C, I have to finally admit that winter has truly hit, here in Northern Alberta. When we were enjoying the balmy Christmas temperatures around 0°C, we could kind of pretend we lived in warmer climes - but no more pretending now. I stay cocooned inside whenever I can.

And I bake and cook (the warmth from the oven doesn't hurt either). I keep going back to hearty, body-warming comfort foods. In addition to soups and stews and slow-cooked meals, I think potatoes fit into this category. All things potato.

As a child I never really liked potatoes - some of my children don't either. But somewhere in my twenties a subtle shift occurred, and has continued to build, to where I now crave potatoes something fierce. Maybe it started because potatoes were a cheap way to round out a meal, but it grew into a craving based on taste and texture. I love them every which way. I always plant at least four or five varieties in my garden. (This year we are still feasting on the purple ones and the pink ones and the lovely banana potatoes.)

But I need to digress a little. 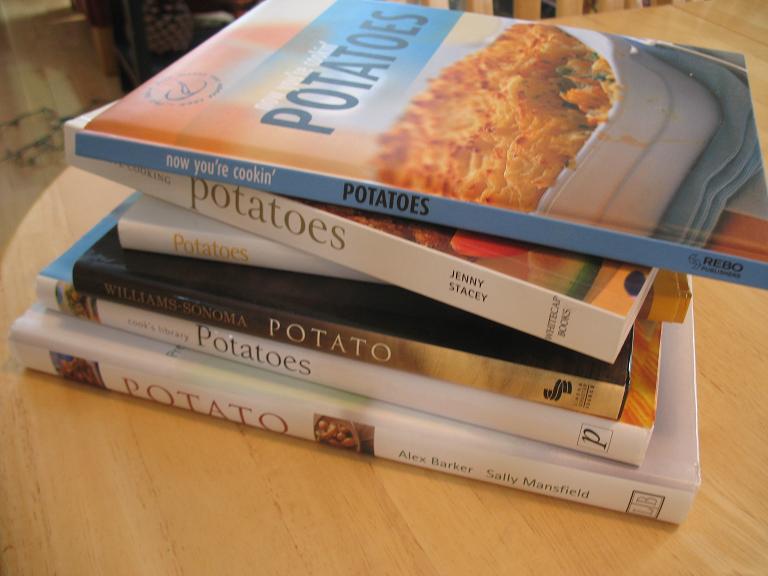 I'm really not sure how that happened. Like all cookbook addict's stories go, they somehow snuck into my household when I wasn't looking. Seriously. I can't have bought them all myself (can I?)

In my eagerness to be a little more organized this year, I corralled all my cookbooks from the piles around the house - on the counter under the microwave, on my bedside table, in the bathroom magazine rack, on the floor beside the sofa, in the basement and in various stacks mixed in with dishes, magazines and cooking gadgets. 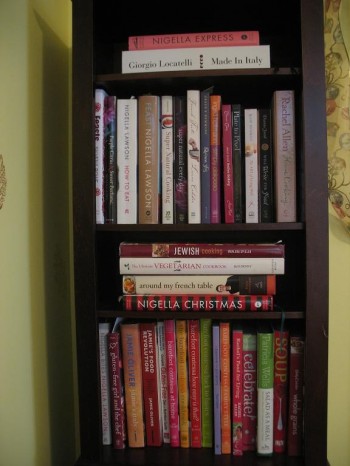 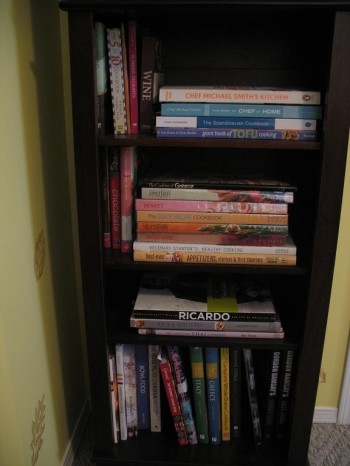 Goodness gracious - do I really own that many cookbooks? Naughty cookbooks, they have been multiplying in their hiding spots. 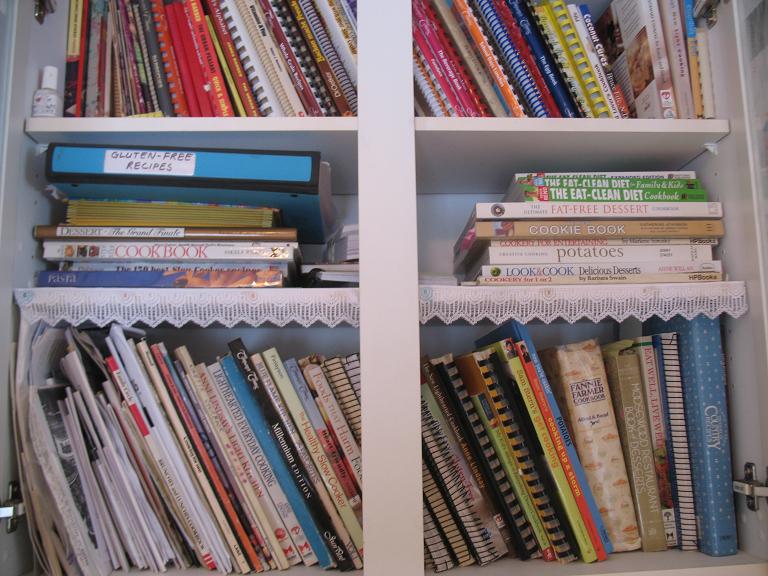 And those potato ones - they are especially prolific little devils. Maybe I should start cooking from them? Not just reading them like novels. 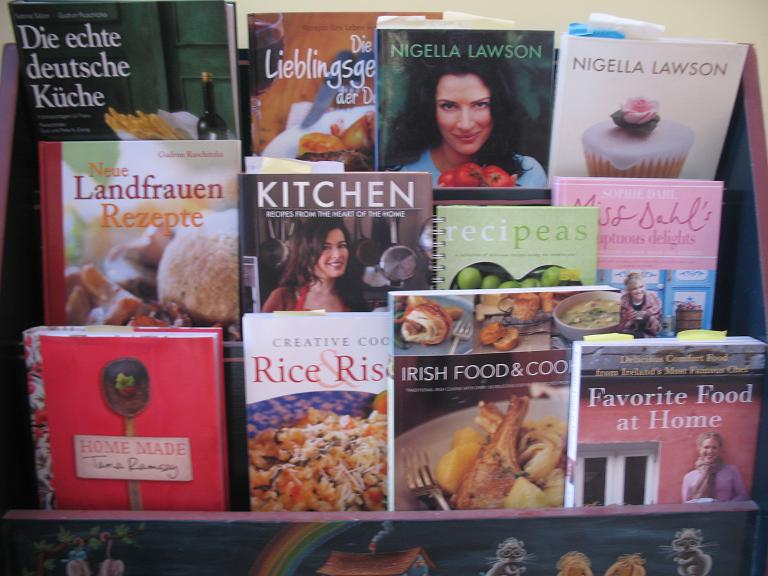 Maybe I will start next week, but for this week, here is the recipe I promised from our leftover New Year's baked potatoes. It's not from one of my books, but rather from the pantry and cupboards.

Born from another organizational thought - I will try to pare down my overflowing food shelves and freezers in this new year. I will try to use up those cans of crabmeat I got on sale, and those bags of cool black lentils I found in the little deli on Whyte Avenue (but why did I buy four bags? Who knows?), and the cases of beans ordered from my food club, and the packets of guava paste I couldn't help buying in the Lebanese market, and the jars of plum vinegar and pomegranate molasses that looked so interesting, and the canned palm hearts I bought for a recipe and never used, and the dumpling mixes I rooted out of the sale bin in the German import store . . . you get the picture.

Yes, it's time to put all those excited germs of cooking ideas into practise and use up some of my stockpiled goods. That's where this recipe came from - I had the leftover baked potatoes, and my glance landed on two different cans of crabmeat and some water chestnuts on my shelves, and a root-around in my fridge. I've gotta do this more often. (Plus there's a new little space on my shelves - whoopee! Maybe as soon as the cold lifts, I'll go shopping. Whoa, Nellie. Maybe I won't. That little space does look good.) So I'm trying to organize my cookbooks and pantry. In the coming months I will share with you some of the results of that shift. Some of the recipes when I actually follow some from the books. But for today I'll start with the potatoes.

I think I'd better go read some cookbooks first.

(And maybe hide some of those potato ones.)

Is there such a thing as a CCA (Cookbook Collectors Anonymous) support group? 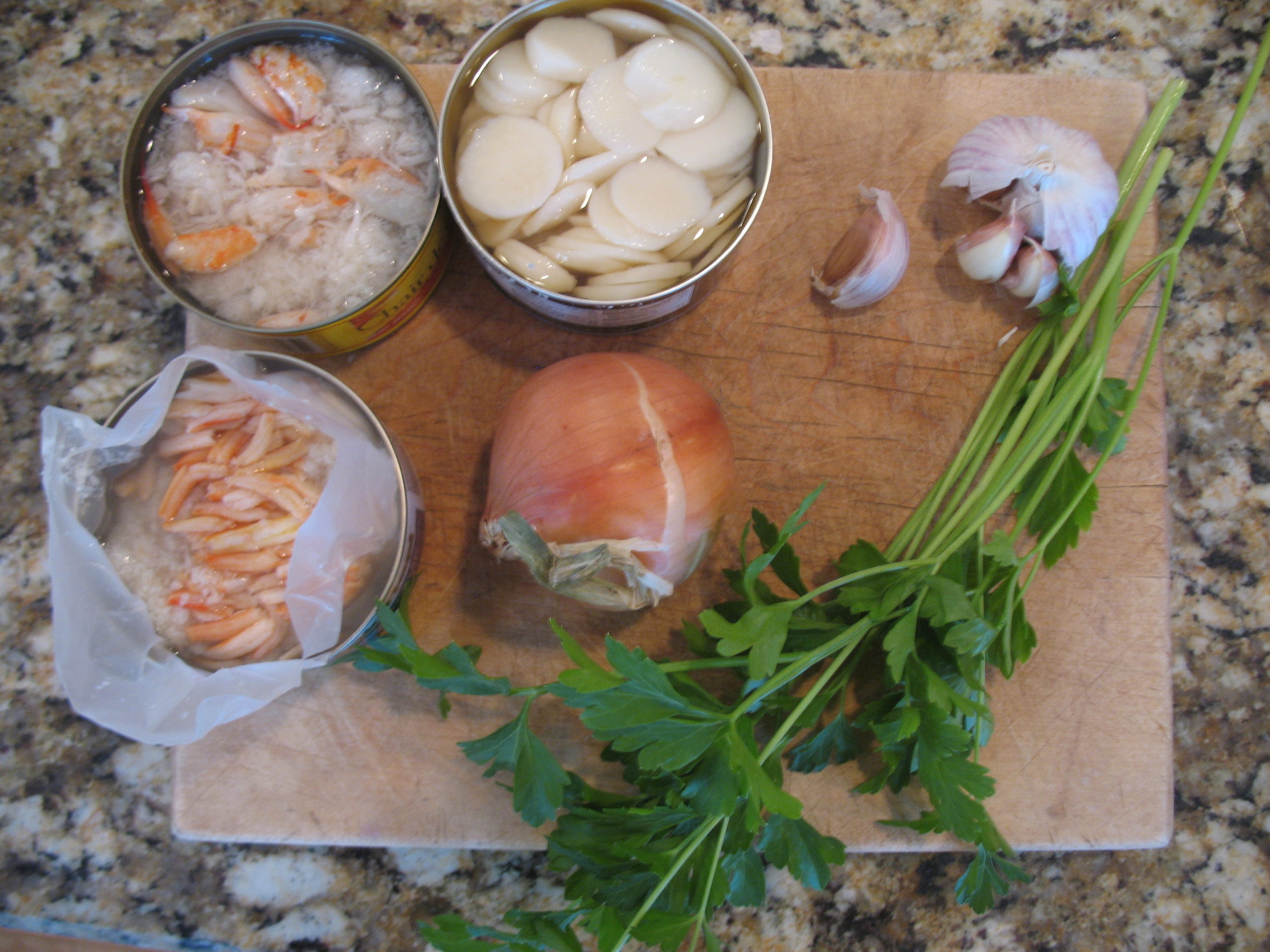 Kitchen Frau Notes: You can used leftover baked potatoes, or bake them specially for this. Just rub them all over with oil and stick them on a cookie sheet in the oven at 425-450°F for 45 minutes to an hour, until tender when pierced with a fork.

I imagine this would work wonderfully with fresh crab meat, or even the imitation kind, chopped, if that's all you have (use about 1½ to 2 cups). I just happened to have the canned kind around (you know - the shelves). If you want to make it vegetarian, substitute a few good handfuls of shredded cheese for the crabmeat. If you use the coconut oil, it is dairy-free. If you use egg-free mayonnaise or substitue the mayonnaise with with sour cream, it is egg-free. 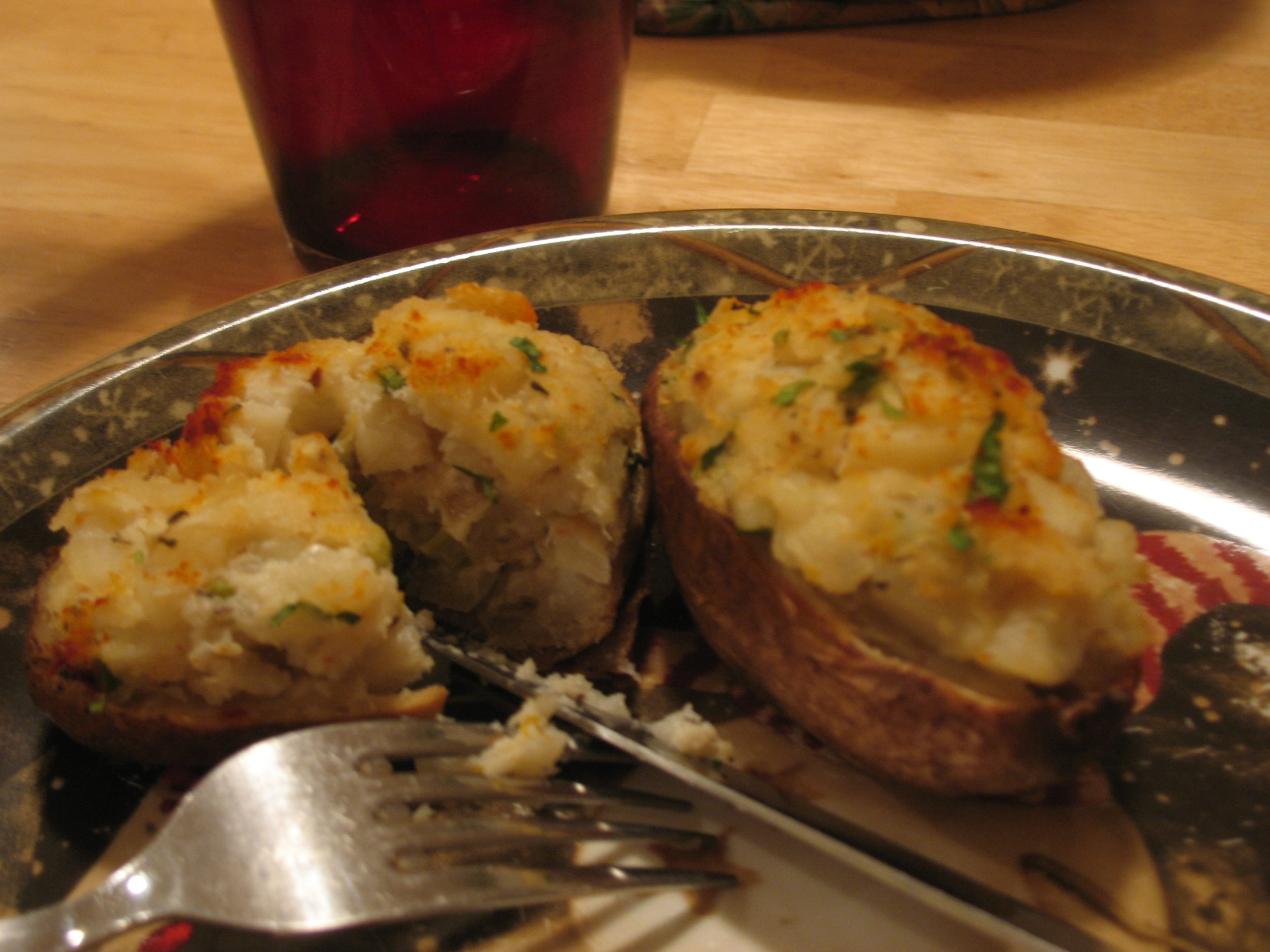 Heat the butter in a small, heavy saucepan over medium heat. Mince the garlic and dice the onion, then saute in the butter until limp and translucent, but not browned. Remove from heat.

Cut the baked potatoes in half lengthwise and scoop out the insides with a spoon, careful to leave a ¼" (½cm) shell of potato flesh around the outside. Pile the scooped-out insides into a bowl and mash them with a potato masher or fork. 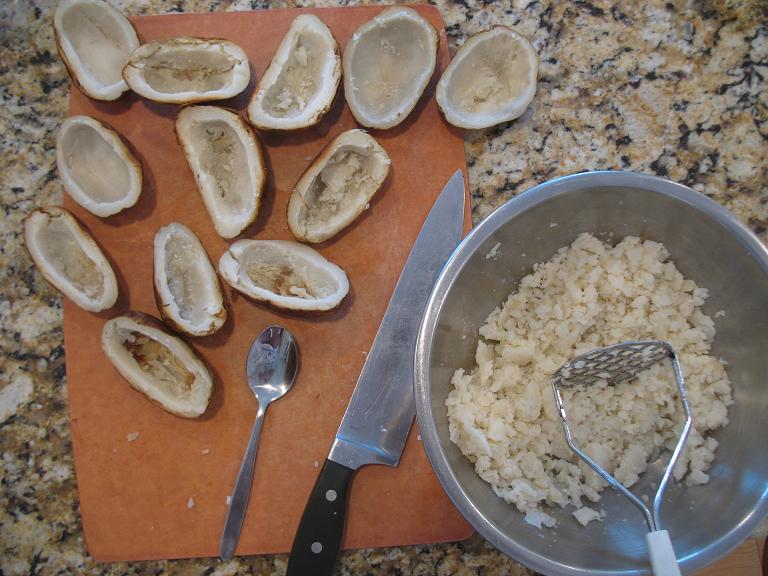 Scrape in the sauteed onions and garlic. Add the remaining ingredients, except for the paprika.

Mix it all lightly together, then mound the filling into the scooped-out potato halves, shaping the tops smooth with a teaspoon. Set the filled halves into a 9x13"pan. Sprinkle with the smoked paprika and bake at 350ºF for 45 minutes. 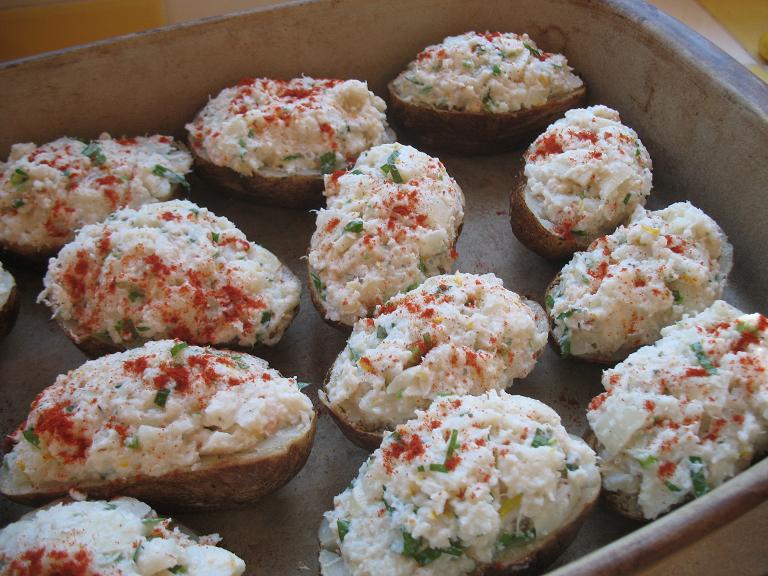 How to Make Classic Mashed Potatoes