Even if you think you don’t like eggplant, you will love the silky lusciousness of braised eggplant – and it only takes eight minutes to prepare! (Skip to recipe.) 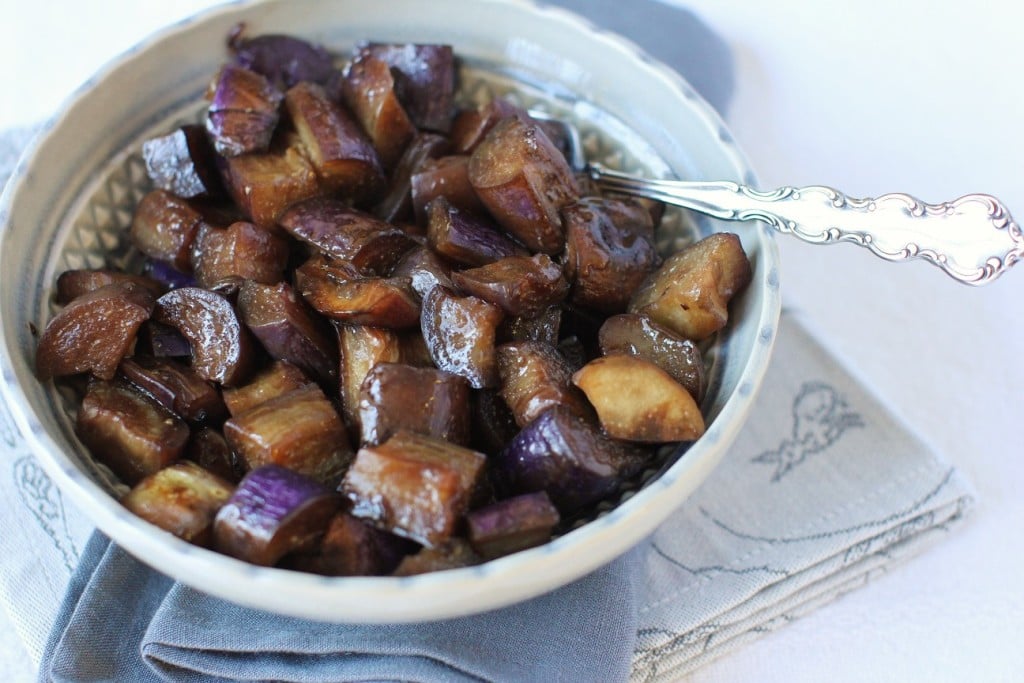 It's hard to describe the sheer heaven of this eggplant dish - juicy, tender morsels of silkiness that offer the softest bites of umami flavour. My mouth does a little soft-shoe dance routine with every taste.

But then, I am an eggplant lover. It's kind of like kale - you either love it or hate it.

That being said, I think this could be the dish that crosses you over to the other side, if you are one of those (whisper it) eggplant haters - egads! 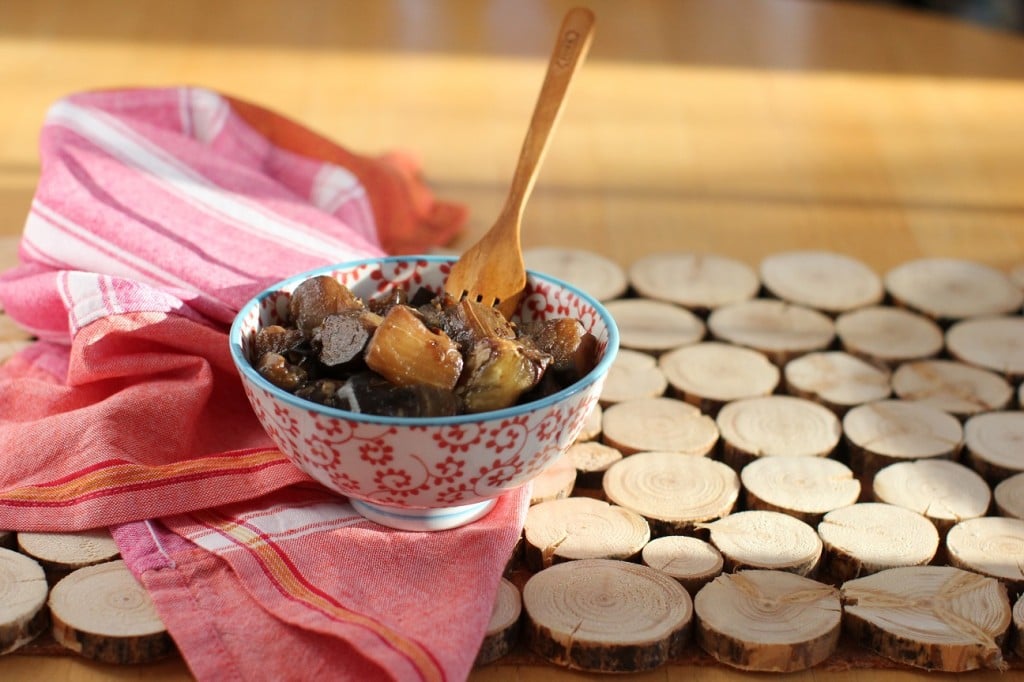 When my kids were young, some of them were definitely eggplant haters - and zucchini haters, and mushroom haters. What do they all have in common? Texture. These vegetables can all have that rubbery-yet-mushy texture when cooked.

My daughter who was the worst eggplant hater - the mere thought of it made her gag - is now the biggest eggplant lover. Who can explain it? Maybe it's maturity, maybe it was tasting it at someone else's home during her high school German exchange, maybe it's one of those 'Green Eggs and Ham' things.

I wish I had known to prepare eggplant, or aubergine, like this back then. I learned how to cook it this way from my mom a few years ago, and every time she makes it we all devour it. When we were growing up, she usually floured-egged-crumbed slices of eggplant and fried them til crispy. Oooeee! I do love it done that way - the crispy outsides and melting insides. However, it's shocking how much oil those humble slices of eggplant can absorb. They're like super-sponges!

When the eggplant gets braised this way, you'd think there was a lot of oil in it, because of its silky, sumptuous texture, but it's really only a small amount. Somehow the water releases the secret softness inside the eggplant flesh that usually only slow and long roasting in the oven produces. The flavour is a bit like buttery sauteed mushrooms, but better.

Make a big batch of these braised eggplants, because not only is it lovely as a side dish, but the leftovers are wonderful layered on a sandwich or a burger, or folded into an omelette, or stirred into rice, or eaten with a spoon from the container.

Braising is a cooking method that means browning the food first, then a long slow simmering in liquid. I took a bit of culinary liberty in calling this eggplant dish braised - it's 'browned' by the soy sauce, then subjected to a very speedy kind of high-temperature simmer (boiling, actually), but I'm sticking with braised.

Or you could call it 8-Minute Eggplant. By any name, it is delicious.

Kitchen Frau Notes: Any kind of eggplant works for this dish. 500 grams is about 1 large regular eggplant, or 2 medium long Japanese eggplants.

Basically the eggplant is cooked in the liquid, covered, for 5 minutes, then uncovered and cooked for 2 to 3 minutes more to evaporate the remaining liquid and that's it. Done. 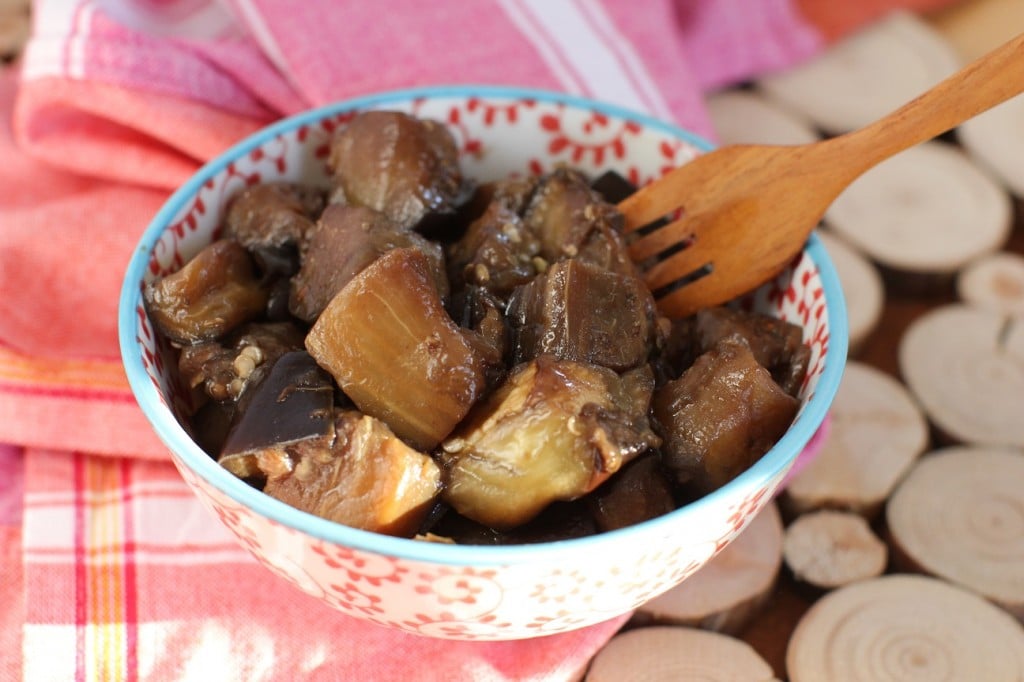 Cut the end of the eggplant and dice it into bite-sized chunks, about 1 inch square (2.2cm). 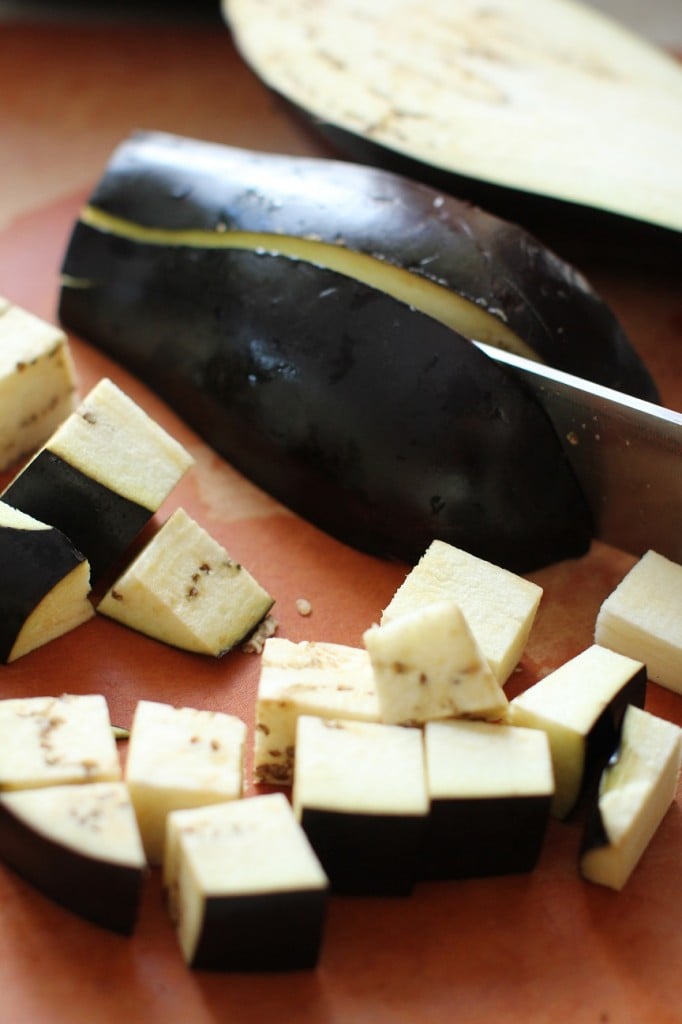 In a large, heavy-bottomed skillet, heat the water, olive oil and soy sauce to boiling. Add the cubed eggplant and toss with a spatula to coat all the pieces in the liquid. 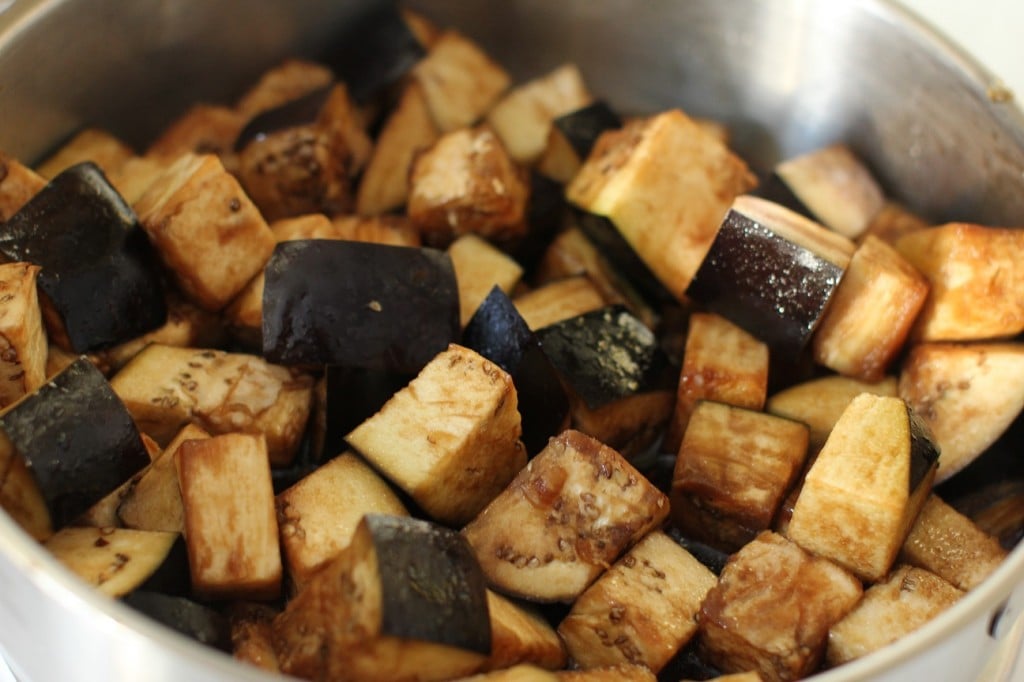 Put a lid on the skillet and turn the heat to medium. Cook for 5 minutes, stirring (or rather gently flipping) the eggplant pieces halfway through. 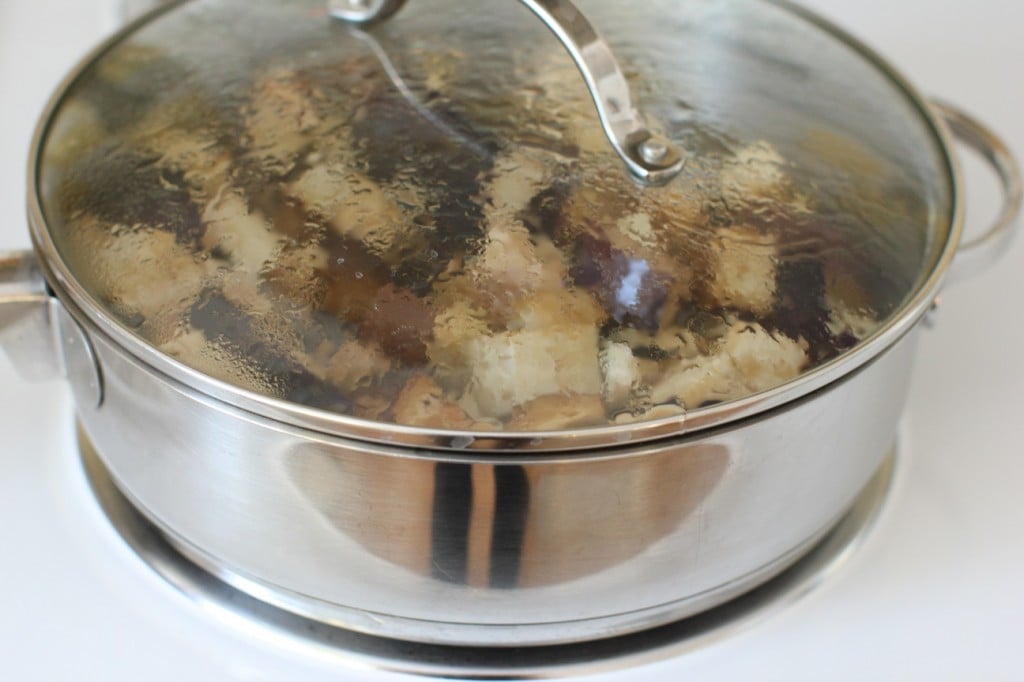 Remove the lid, and cook the eggplant at medium-high heat for 3 minutes, until any extra liquid has boiled off and the skillet is dry around the eggplant pieces, except for a bit of oil. Toss the pieces very gently with a spatula once during this time. You want the pieces to retain their shape and not be turned to mush by too much stirring. 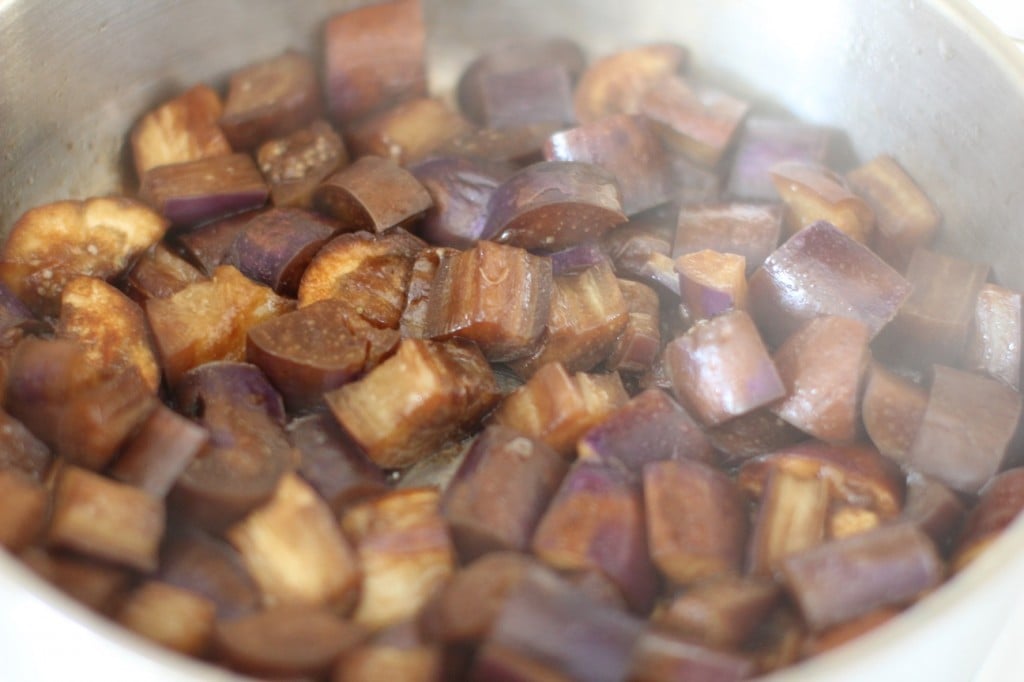 Makes a wonderful side-dish to steak (it's almost like sauteed mushrooms, but better!), or any other kind of meat.