This method for canning tomatoes is super easy - no messy peeling required. Just whiz the tomatoes in a food processor, boil down as much or as little as you like, and process. You'll have recipe-ready home canned tomatoes to enjoy all winter long. (Skip to recipe.) 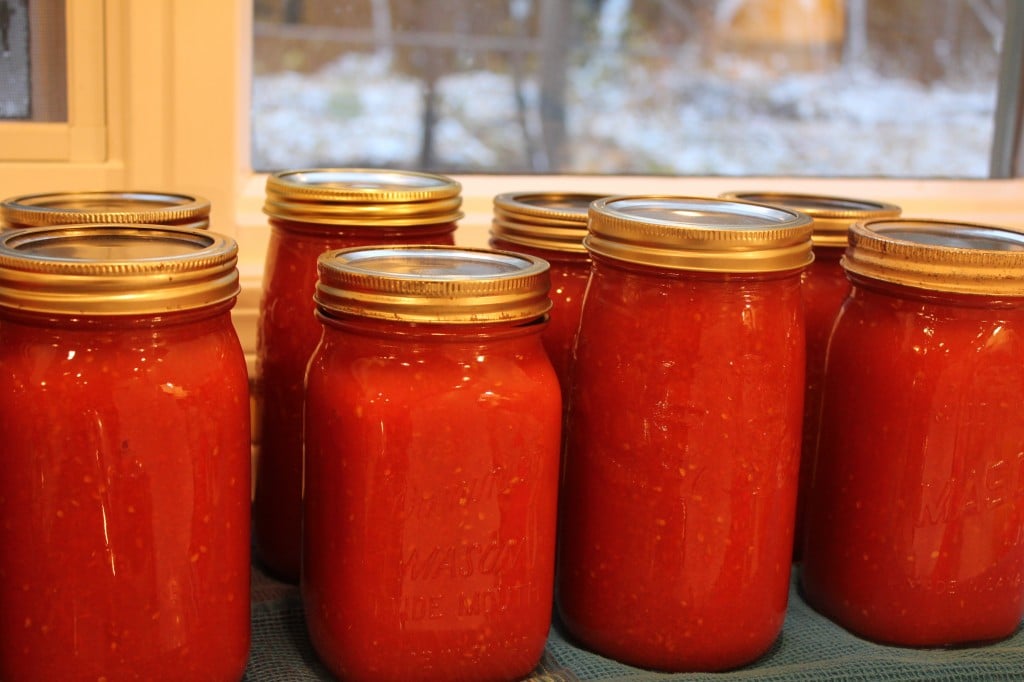 Everything here in our great white north is a little later than the rest of the world, it seems. Rhubarb pushes out of the cold soil in May, daffodils finally bloom in June, and the tomatoes take their dear sweet time. In July and August, when I was reading about all the wonderful things everyone in latitudes south of us was doing with their fresh garden tomatoes, ours were little green balls on big leafy plants and I was jealous. The few that did ripen out in the garden were savoured with sighs of pleasure.

When the frosts threatened a few weeks ago, I picked pails and pails full of hard green tomatoes before I threw the plants on the compost heap. The bounty was laid out in shallow cardboard boxes all over our basement floor, and what nature started outside has been gradually ripening inside, producing a foreshadowing of Christmas - bright balls in varying shades of reds and greens.

Which is a good thing, because this is what our yard looks like right now: 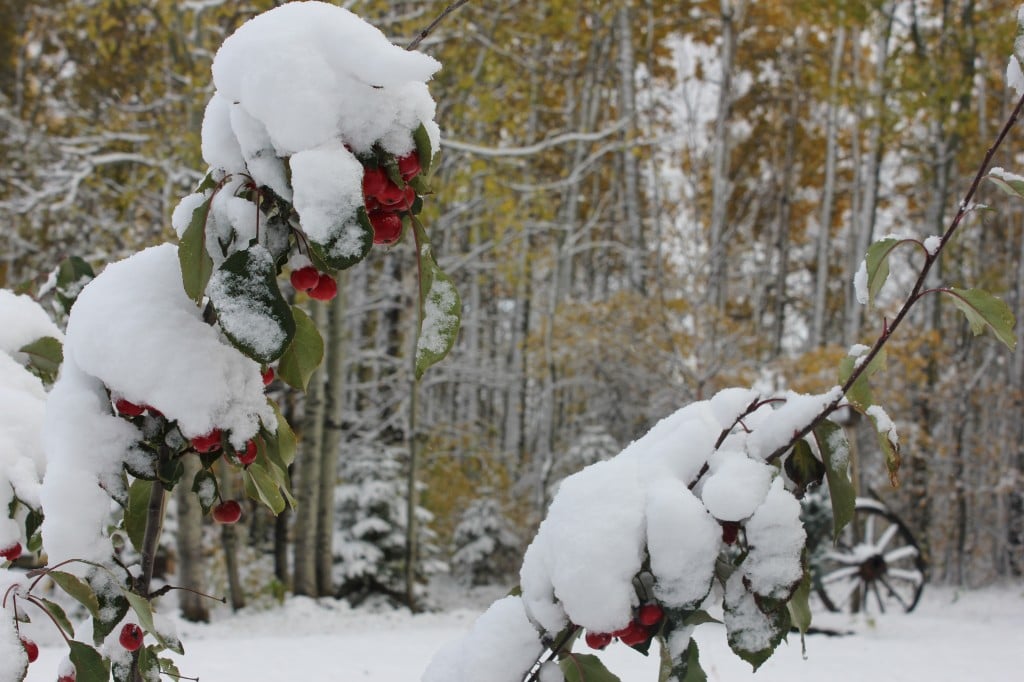 We had an early snow. 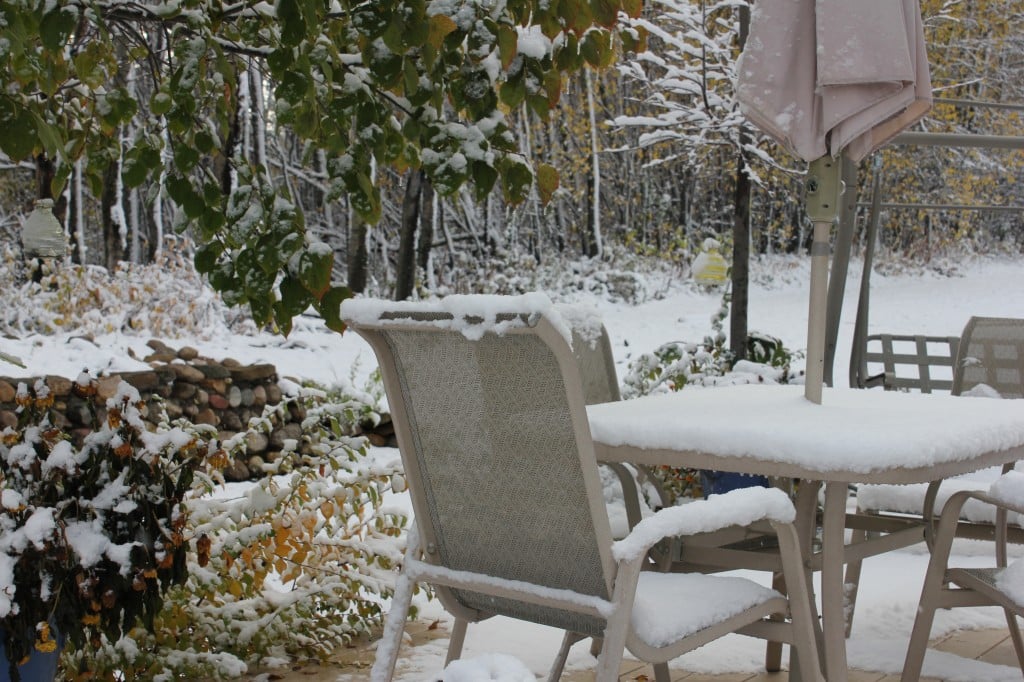 Our world is white. 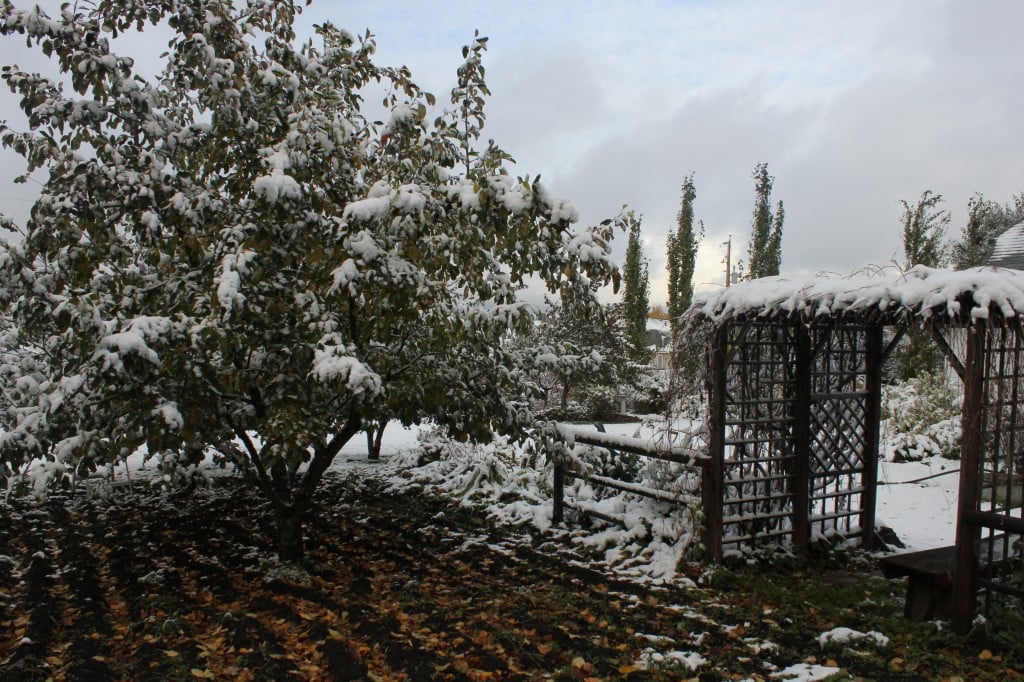 I love the beauty of it all,

There's something exciting about the first snowfall. It felt cozy today, coming home after work and stirring my bubbling pot of tomatoes as they slowly simmered down into a rich tomato sauce.

So simple really - tomatoes, a bit of salt, a bay leaf or two and some lazy stirring.

The white world outside my window made it a pleasure to put up a big batch of the garden's bounty. Those gleaming jewel-red jars of canned tomatoes will brighten a winter day when the novelty of the never-ending white stuff has long since worn off and we are dying for a breath of spring.

This isn't even a recipe, more a suggestion. I'm lazy, and peeling tomatoes, then canning them, just seems like too much work, so I always 'put up' my tomatoes like this. . . whiz 'em in the food processor, cook 'em for a while, then pop 'em into hot, sterilized jars. Done.

It's a perfect activity for a cold, can't-do-anything-outside fall day and fills that latent primal need to prepare food for the long winter ahead.

Kitchen Frau Notes: You can simply preserve the pureed and boiled tomatoes as they are, or add a little salt, maybe simmer them with a bay leaf. You could go all out and add garlic, onions, Italian spices and make up a proper tomato sauce. I usually make the sauce fairly plain, then I can use a quart of it later on to make a base for a spaghetti sauce, throw it into a chili, or add it to soups and stews. It's so handy to have a stash of this simple tomato puree in my pantry.

If you're not into canning, put the simmered and cooled tomato puree into freezer containers and freeze - just as handy. 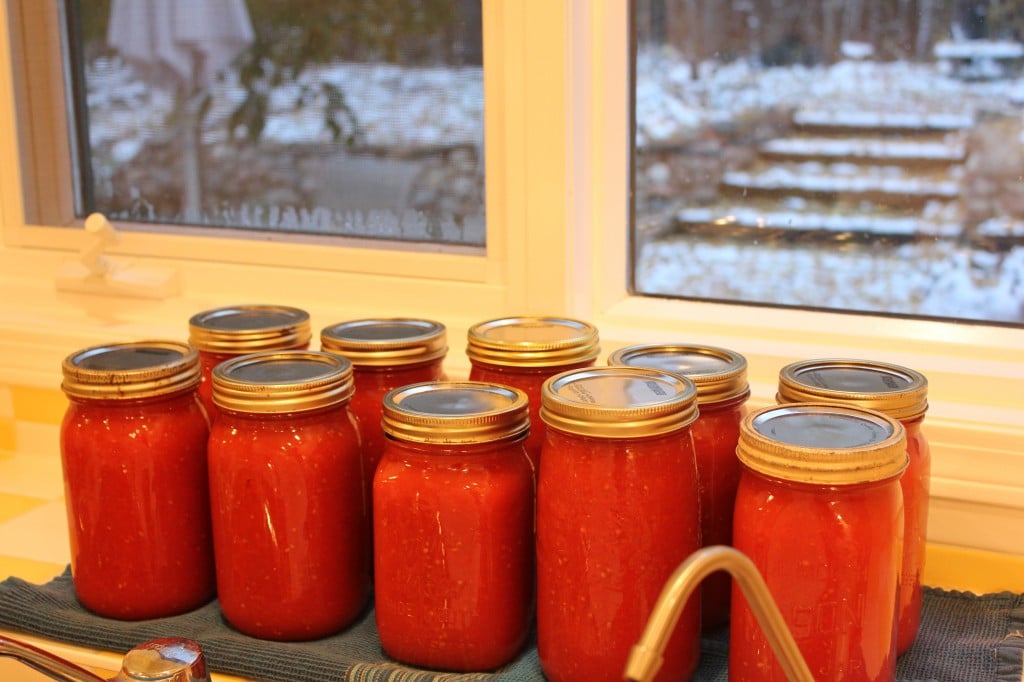 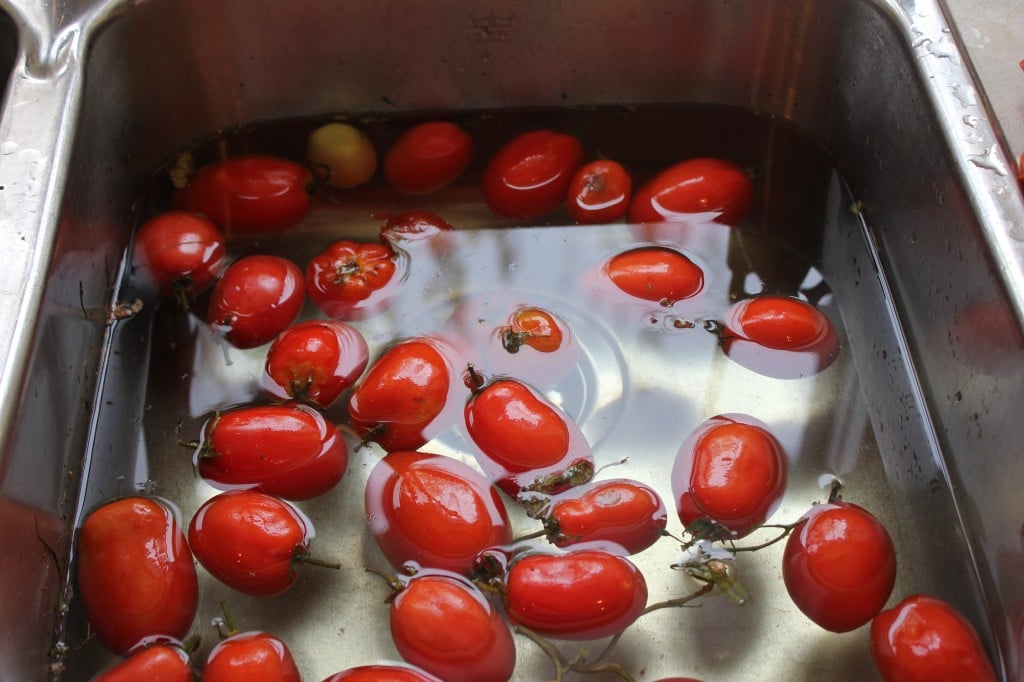 Wash and cut the cores out of the tomatoes. Cut out any blemishes, and put them into the bowl of a food processor (fill it about ¾ full). 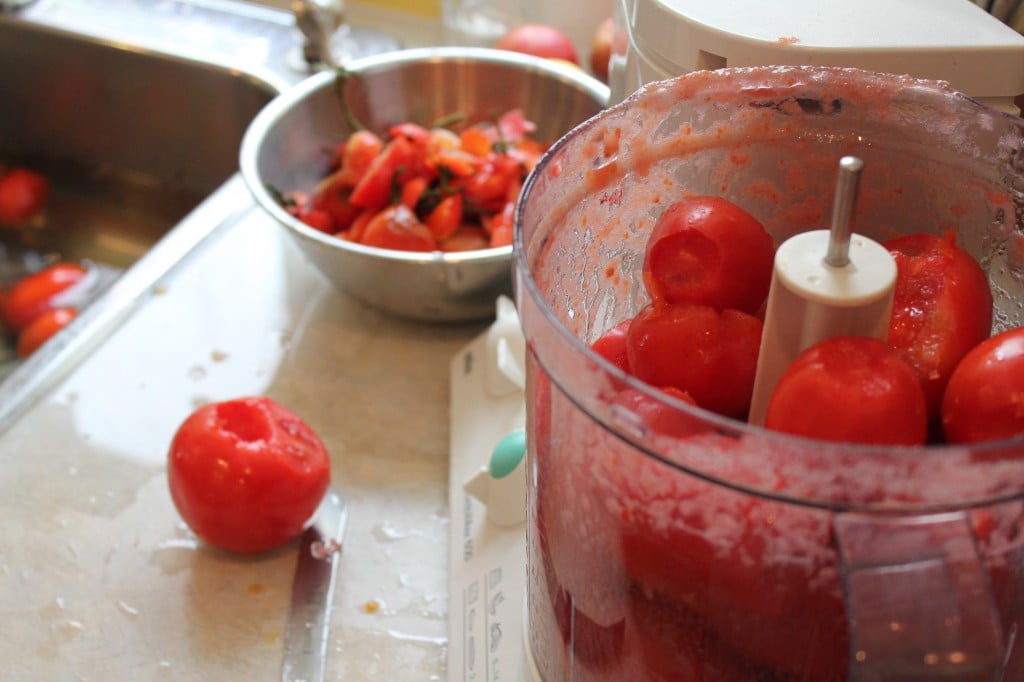 Whiz the tomatoes until they are a puree, but not so long that the seeds are ground.

Pour the tomato puree into a large heavy-bottomed pot. Make sure it is large enough to leave lots of room to boil - no more than ¾ full - or it will boil over (don't ask me how I know - all I'll say is it involves heavy clean-up and unladylike cuss-words.)

Bring the puree to a boil, then reduce the heat to medium and let it boil gently, uncovered, and stirring occasionally, for an hour or more. 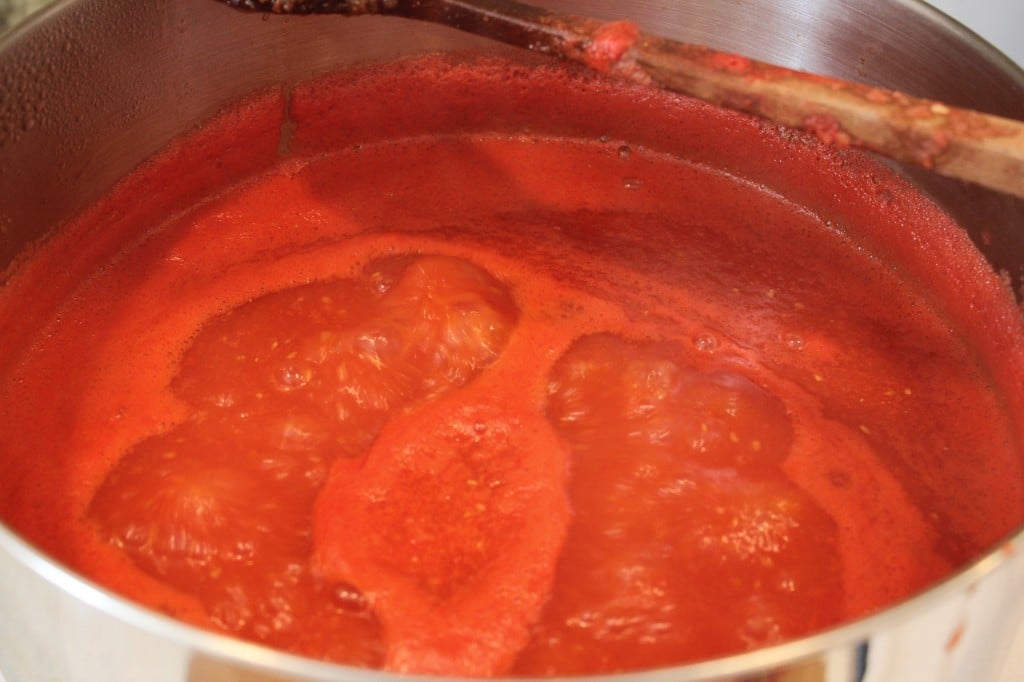 The amount of time you let it boil depends on how watery your tomatoes are (plum tomatoes are more 'meaty'), how wide your pot is (more surface area to boil off), how thick you want the final sauce to be, and how patient you are. I find I usually need at least one hour, but boiling it for 2 to 3 hours makes for a nicer, thicker sauce. Some years when I've been in a rush, and only boiled it for a short time, it was still fine - just thinner and maybe needing a little more boiling in whatever dish I used it in.

There will be foam rising to the top, but after longer boiling, it will stir back into the tomatoes. If you choose to salt the tomato puree, add enough to taste. I usually estimate how much puree I have and add about ½ teaspoon/2.5ml per quart/litre, then taste and adjust the amount. Add your bay leaves if you are using them.

While the tomato mixture is boiling, sterilize the number of canning jars you think will be required (plus one or two extra), by washing them on the hottest cycle of the dishwasher. Leave them in the dishwasher to stay hot until you need them. 10 minutes before the jars are finished washing, set the same amount of metal lids into a saucepan of water to heat on the stove.

When the tomato mixture has reduced to the thickness you want, remove the bay leaves. Ladle it into the hot, sterilized canning jars, using a wide-mouthed funnel if necessary. Fill each jar half full, add 1 tablespoon lemon juice to each jar, and fill it the rest of the way until it is filled to ½ inch (1 cm) from the top. Work with only 2 or 3 jars at a time so that the rest can stay hot in the dishwasher. Keep the tomato puree boiling while you fill the jars so that it goes into the jars as hot as possible. I like to work right beside the stove, setting the jars in a cookie sheet to catch the drips as I fill them.

Wipe the rims with a clean damp cloth and put on the hot metal snap lids. Lightly screw on the metal rings and process the jars in a boiling water bath for 20 minutes for quart jars (15 minutes for pint jars).

Remove the jars from the hot water and set them onto a towel on the countertop where they won't be disturbed until they cool. Enjoy the tiny 'pop' that comes as each jar is sealed. (Any jars that don't have the lid sucked down, keep in the refrigerator and use up in the next week.)

If you are freezing the sauce, let the potful cool, then ladle into clean freezer containers and freeze.

So, each 1 lb tomatoes makes about 1 cup puree after 1 hour cooking, to give you a very rough guideline (by my unscientific methods). 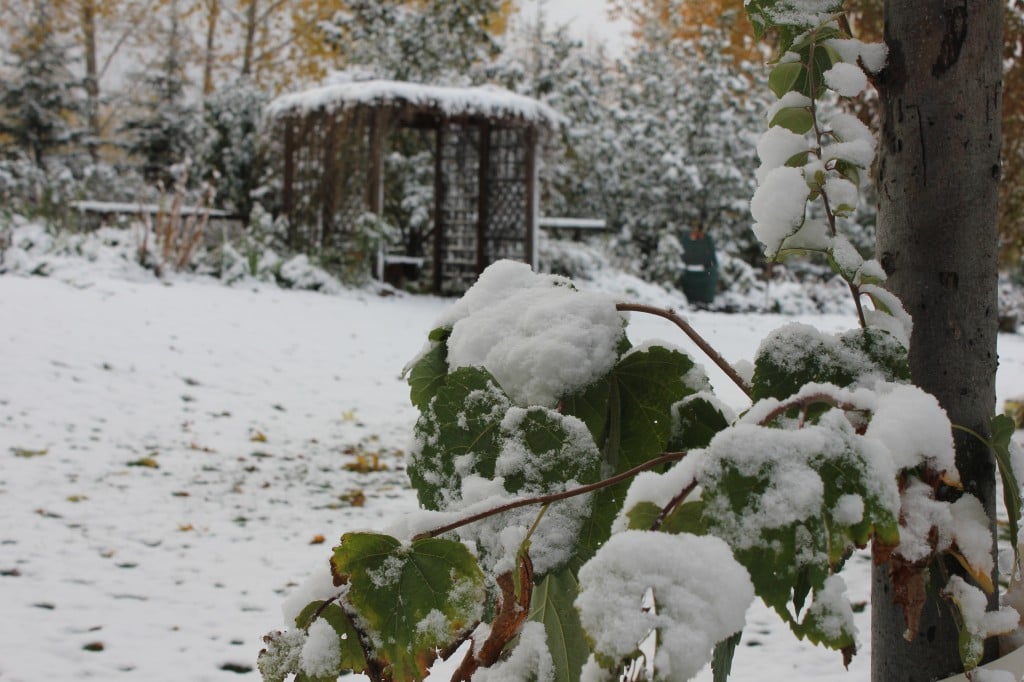 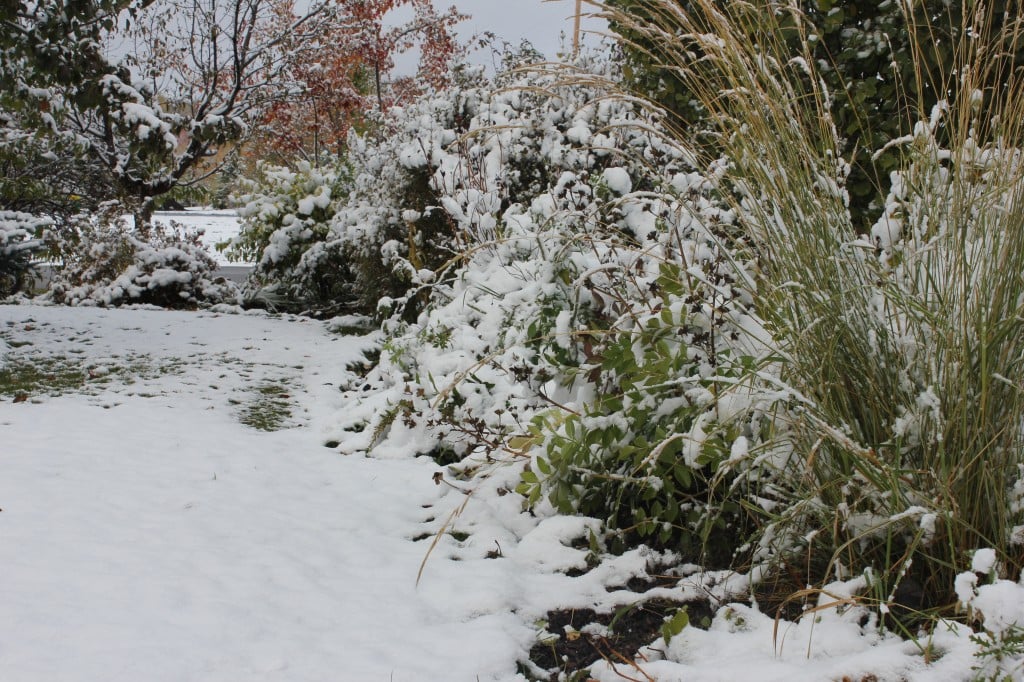