Anzac biscuits are an irresistible Australian oatmeal cookie. One bite and you'll be craving more. These eggless biscuits are delightfully crunchy. Their rich caramel undertones, nutty oats, and sweet coconut are a winning combination. Our new favourite cookie! (Skip to recipe.) 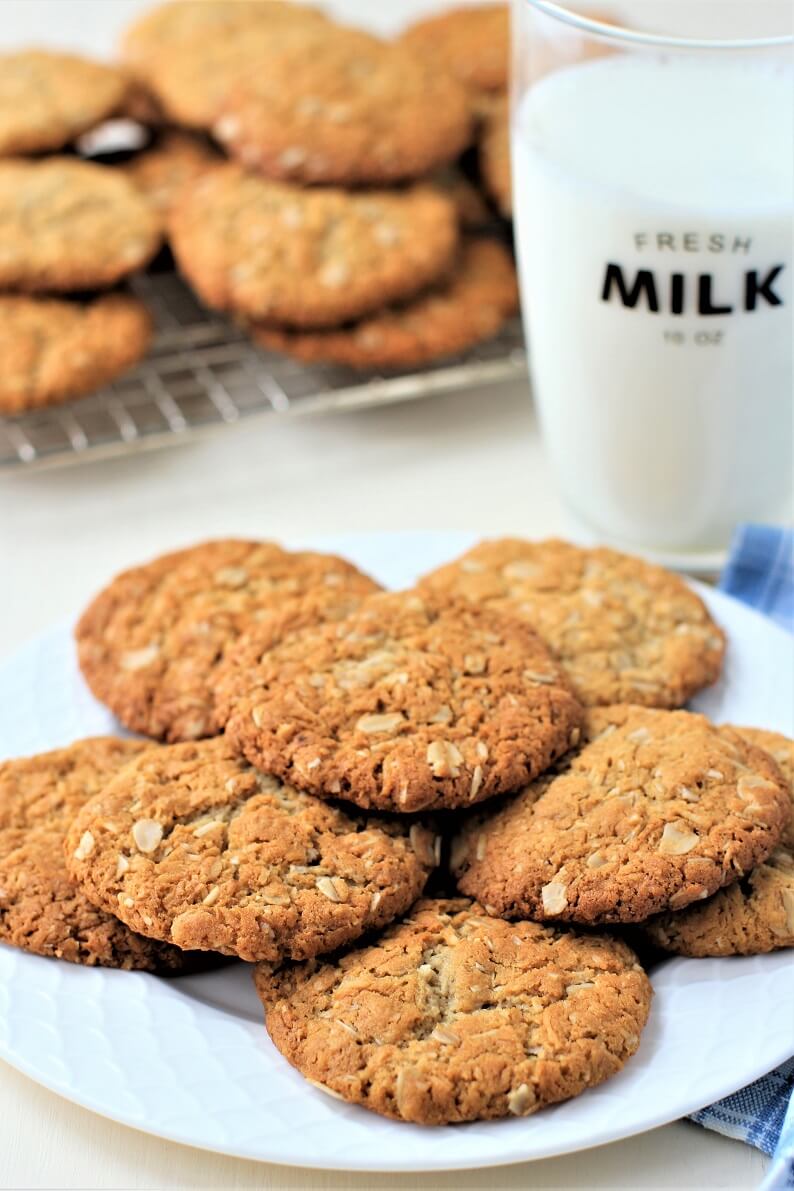 This month for our Eat the World Recipe Challenge, we are heading 'down under' to Australia, that vast country of diverse landscapes and climates. The cuisine of this Commonwealth country is strongly influenced by its British connection, as well as by the many different cultures who have settled there and now call it home.

The Anzac biscuit is an iconic teatime treat originating in Australia close to 100 years ago during World War I. Anzac stands for 'Australian and New Zealand Army Corps'. These biscuits were traditionally baked by the women at home to send to their troops fighting overseas. It is said the biscuits kept well for long periods of time and were sturdy enough to survive the journey intact. The scarcity and rationing of eggs meant Anzac biscuits were made eggless, which also contributed to their appealing crunch. Nowadays they are available everywhere, but still hold a special place on Anzac Day (April 25) in Australia; a day similar to our Remembrance Day here in Canada. This is the day to commemorate all the men and women who served, and those who gave their lives in serving their country. Here is a quote from the Australian Government Department of Veterans Affairs regarding Anzac Day:

'The Anzac tradition—the ideals of courage, endurance and mateship that are still relevant today—was established on 25 April 1915 when the Australian and New Zealand Army Corps landed on the Gallipoli Peninsula (Turkey).

It was the start of a campaign that lasted eight months and resulted in some 25,000 Australian casualties, including 8,700 who were killed or died of wounds or disease.

The men who served on the Gallipoli Peninsula created a legend, adding the word ‘Anzac’ to our vocabulary and creating the notion of the Anzac spirit.

In 1916, the first anniversary of the landing was observed in Australia, New Zealand and England and by troops in Egypt. That year, 25 April was officially named ‘Anzac Day’ by the Acting Prime Minister, George Pearce.'

Anzac biscuits are never to be called cookies, although I did use that term in the introduction so we North American readers could distinguish them from our definition of biscuits (which are scone-like and very different). They were originally made without the coconut, but by 1924 the first mention of coconut being added to the biscuits can be found. Nowadays, most Anzac biscuits contain coconut, however you can also make them with only oatmeal (if you're following the original Australian recipes, it's important to remember that the Australian tablespoon is bigger than ours - it is equivalent to 4 teaspoons, rather than our 3 teaspoons).

Anzac Biscuits can be crunchy or chewy - and have fierce supporters in each camp. Depending on how long you let them bake will make a difference to how crunchy or chewy they are. The golden syrup in them helps create that slight chew. 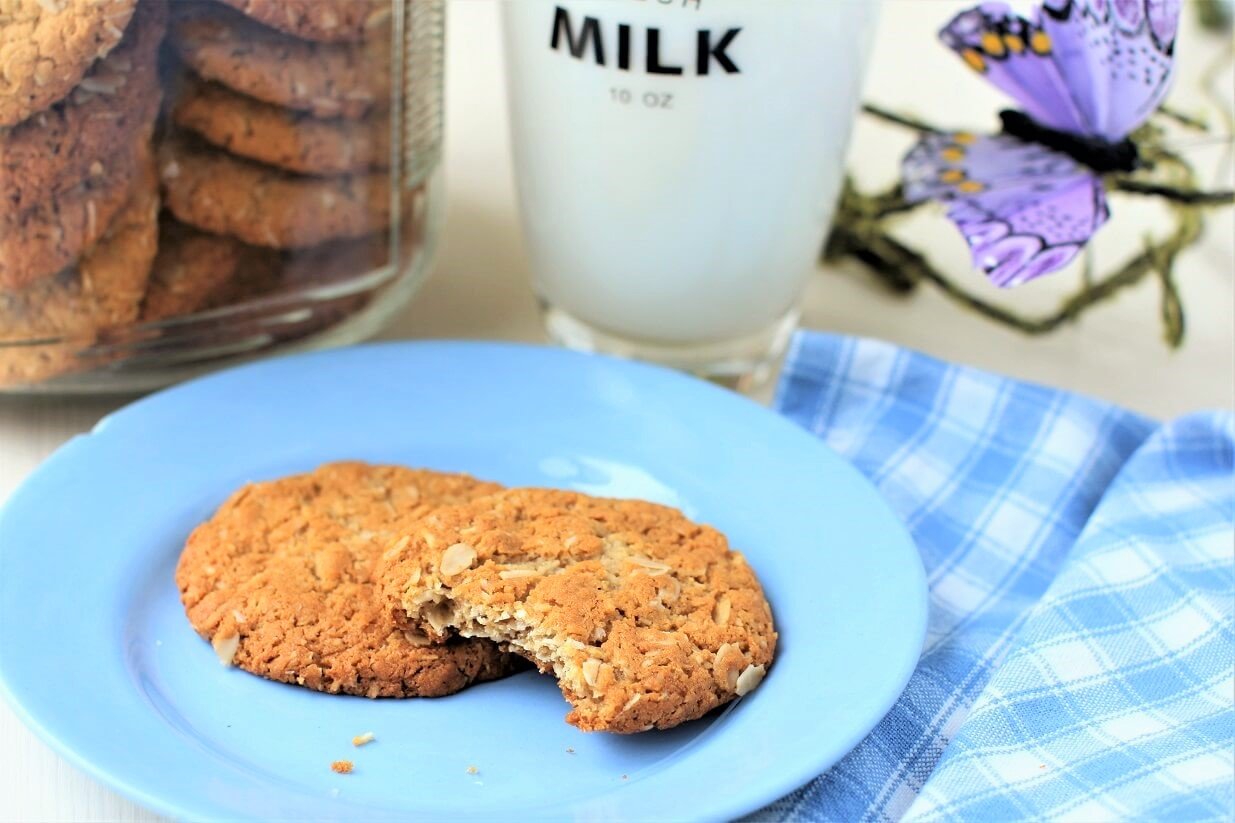 Stir the dry ingredients together in a bowl. Heat the butter, golden syrup, and water in a small saucepan just until the butter is melted. Stir in the baking soda - it's fun to see how it foams up.

Immediately pour the foaming butter mixture into the dry ingredients and stir to combine. 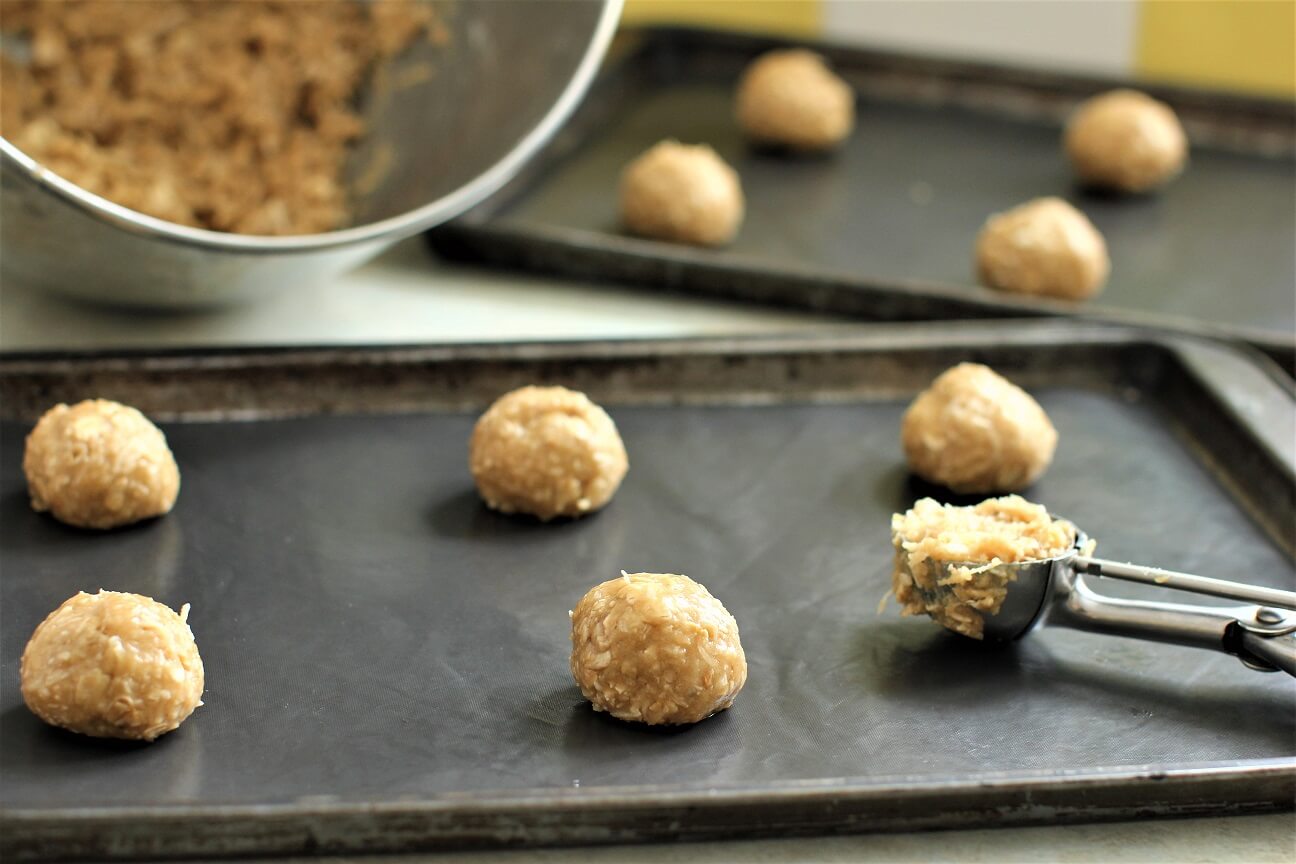 flatten them slightly with the flat bottom of a glass, 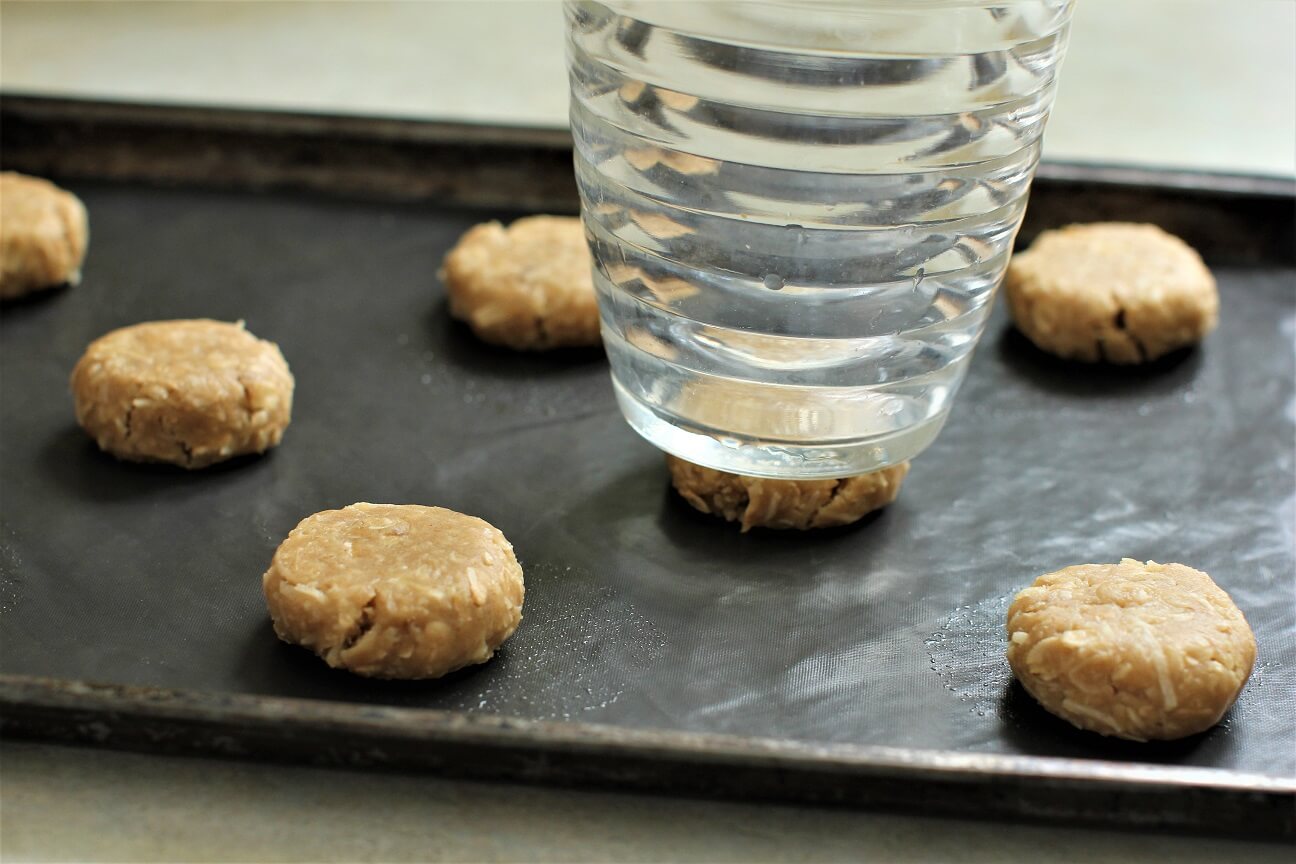 and bake to golden, caramelized deliciousness. 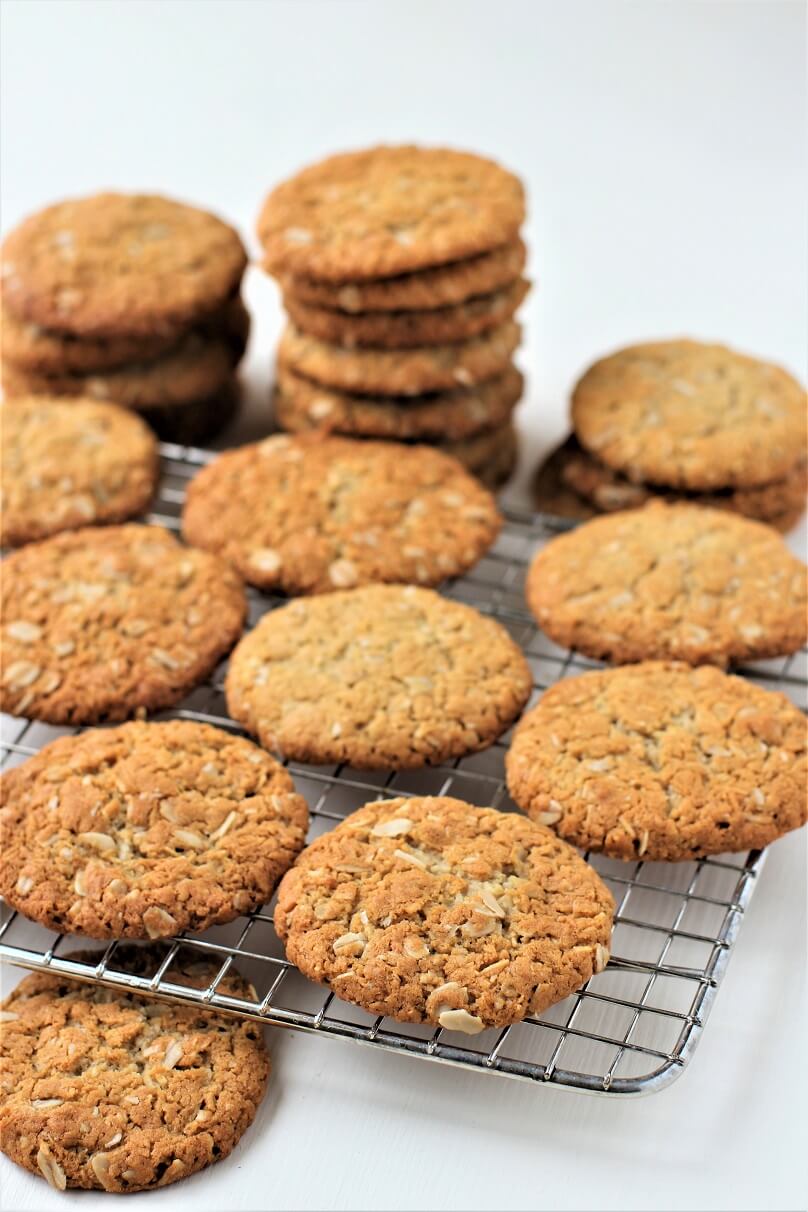 If you can wait until they're cooled, you'll be biting into a wonderfully crisp biscuit that's got a surprising chewiness. The combination of butter, brown sugar, and golden syrup produces the sumptously rich caramel flavours. The lack of eggs provides the crispness and the golden syrup helps provide the chew. All in all, an absolutely winning combination. It's no wonder these biscuits have stood the test of time and are still such a popular classic in Australia today. 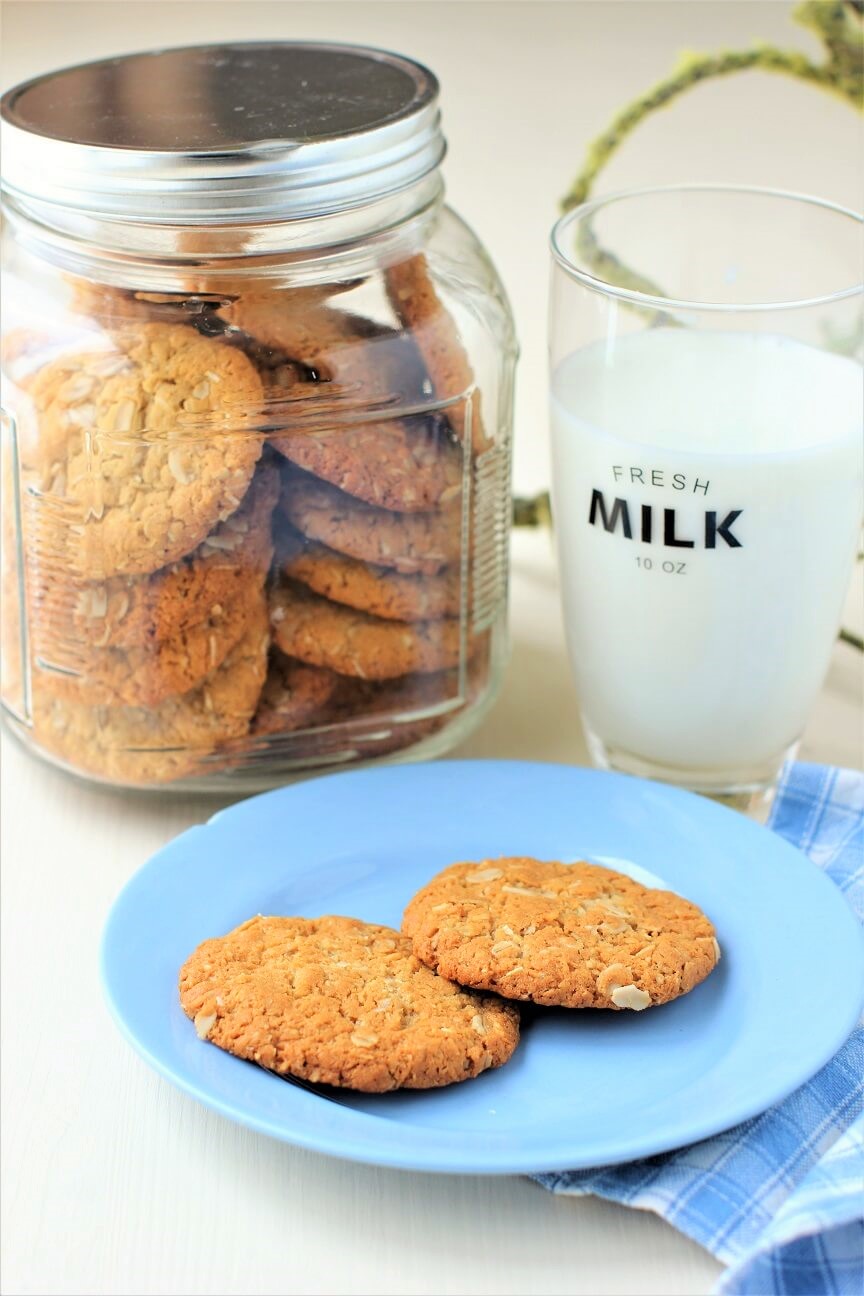 I believe it's time to go pour myself a glass of milk and take a biscuit break! 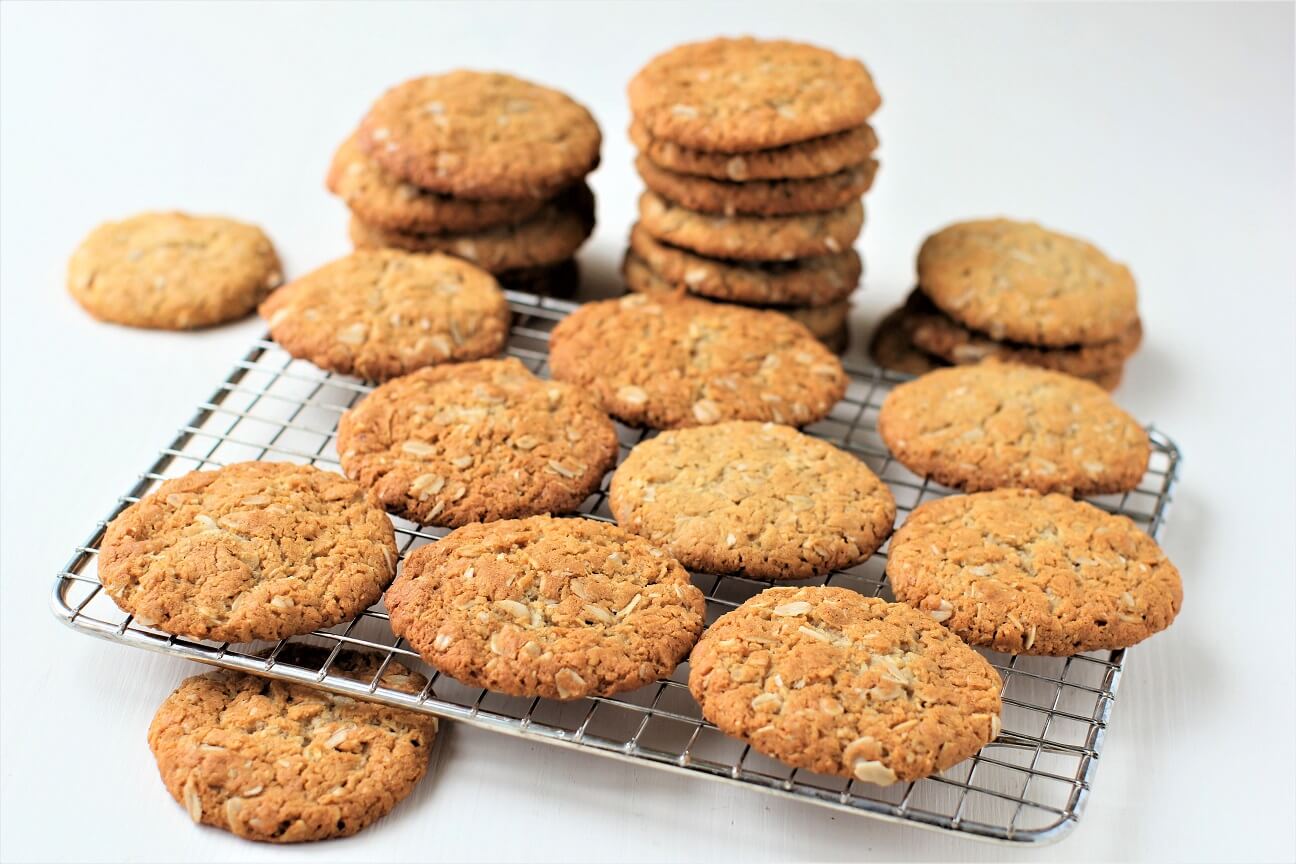 Preheat the oven to 325°F (170°C). Line 2 cookie sheets with parchment paper or silicone liners, or grease them lightly.

Melt the butter in a small saucepan over medium  heat. Add the golden syrup and water. (Tip: dip the measuring spoon into the melted butter before measuring the syrup and the syrup will easily slip out of the spoon.)

Remove the saucepan from the heat and add the baking soda. It will foam up. Immediately pour it into the flour mixture and mix well. If the mixture looks too moist and sticky, let it rest for 5 minutes and it will firm up as the oats absorb some of the moisture. (If using large flake old-fashioned oats, the mixture will be stickier at first, but firm up after a few minutes.) If the dough looks too dry, add a bit more water, one tablespoon at a time. It should be a somewhat moist, crumbly-looking dough.

Roll the dough into 1¼-inch (3cm) balls (a cookie scoop works well for portioning the dough). The mixture will make your hands quite oily from the melted butter, so I suggest you roll it all into balls and set them on a plate, not touching. Then you can wash your hands and transfer them to the cookie sheets as needed. You will get 24 to 26 balls.

Place the balls at least 2 inches (5cm) apart on the lined cookies sheets. Press them down to flatten them slightly with the bottom of a glass. The cookies will spread as they bake.

Bake for 12 to 14 minutes, until they are a deep golden colour and still slightly puffed in the center. Bake them for less time if you prefer them chewy (try 10 minutes).

Cool the biscuits for 2 minutes in the pans. The biscuits will still be very soft, so remove them carefully with a spatula to a rack to finish cooling. They will become firm and crisp once they are fully cooled.

Check out all the wonderful Australian dishes prepared by fellow Eat the World members and share with #eattheworld. Click here to find out how to join and have fun exploring a country a month in the kitchen with us! 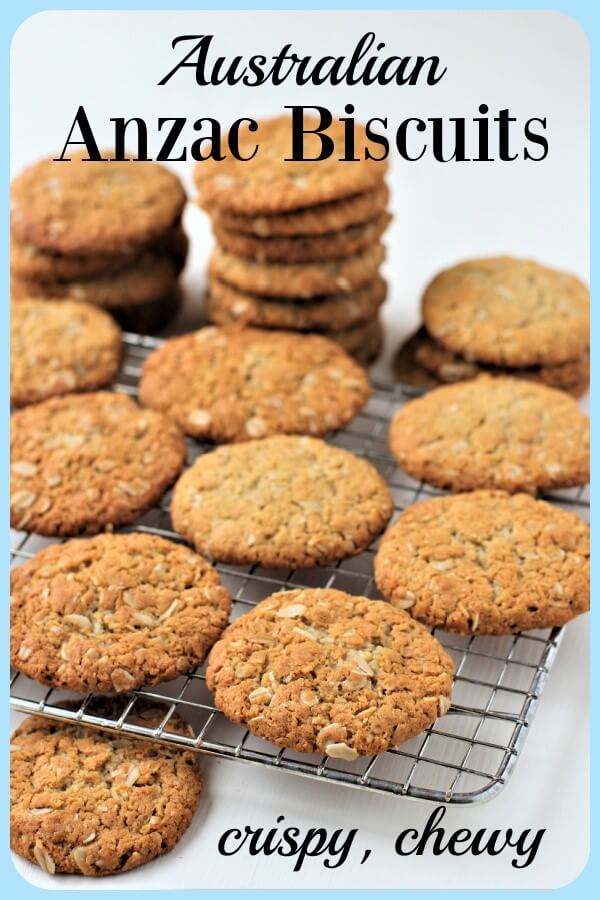