Tender and tangy, this Guyanese dish of fried tilapia with onions and peppers in a simple oil and vinegar sauce tastes light and fresh and uniquely different than an ordinary plate of fried fish. The vinegar soaks into the golden coating to become mild and mellow, just adding a touch of bright piquancy to this delightful fish dish. (Skip to recipe.) 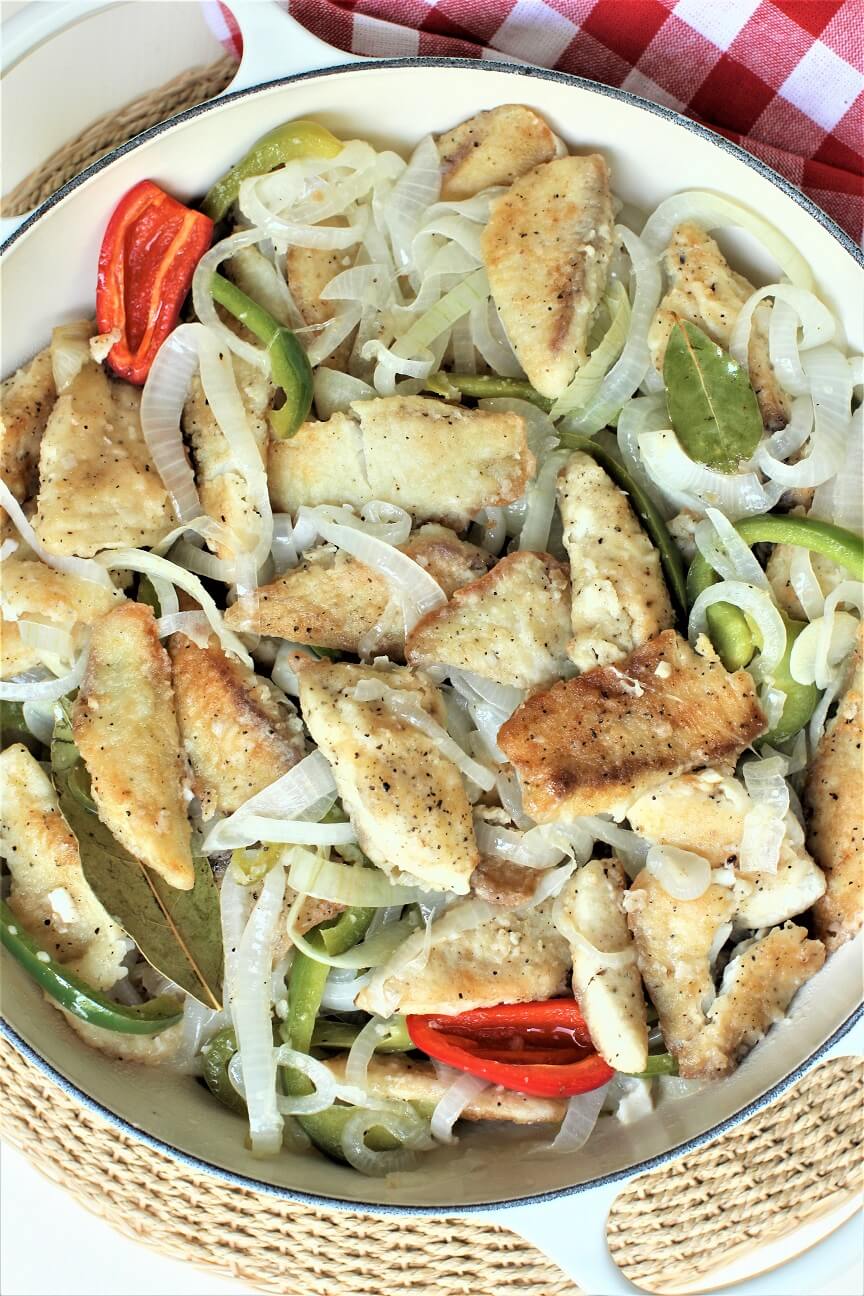 This month for our Eat the World recipe challenge, we are headed to South America and the beautiful little country of Guyana. It's the third smallest country on the continent, with a population of 750,000, and is the only country in South America with English as its official language. Guyana was initially colonized by the Dutch, had some areas colonized by the French, and then fell under British rule in the early 1800s. It only received its independence from Britain in 1966. Although Guyana lies on the northeast corner of mainland South America (surrounded by Surinam, Brazil, Venezuela, and the Atlantic Ocean), it is actually considered part of the Caribbean region, with strong ties to the other Caribbean countries, sharing many of the same festivals, foods, music, and sports. Due to its long British rule, it is connected through history, culture, and politics with the English-speaking Caribbean (the islands of the West Indies).

That explains why the cuisine of Guyana is so diverse, with representation from its Dutch and British legacy, as well as African, Indian, Amerindian, Chinese, Portuguese, and other European influences. The country's main agricultural exports are sugar, rice, vegetable oils, beef, pork, poultry, dairy products, fish, shrimp. Miles of beautiful Atlantic coastline on Guyana's eastern border mean plenty of fresh seafood to add to its delectable cuisine. 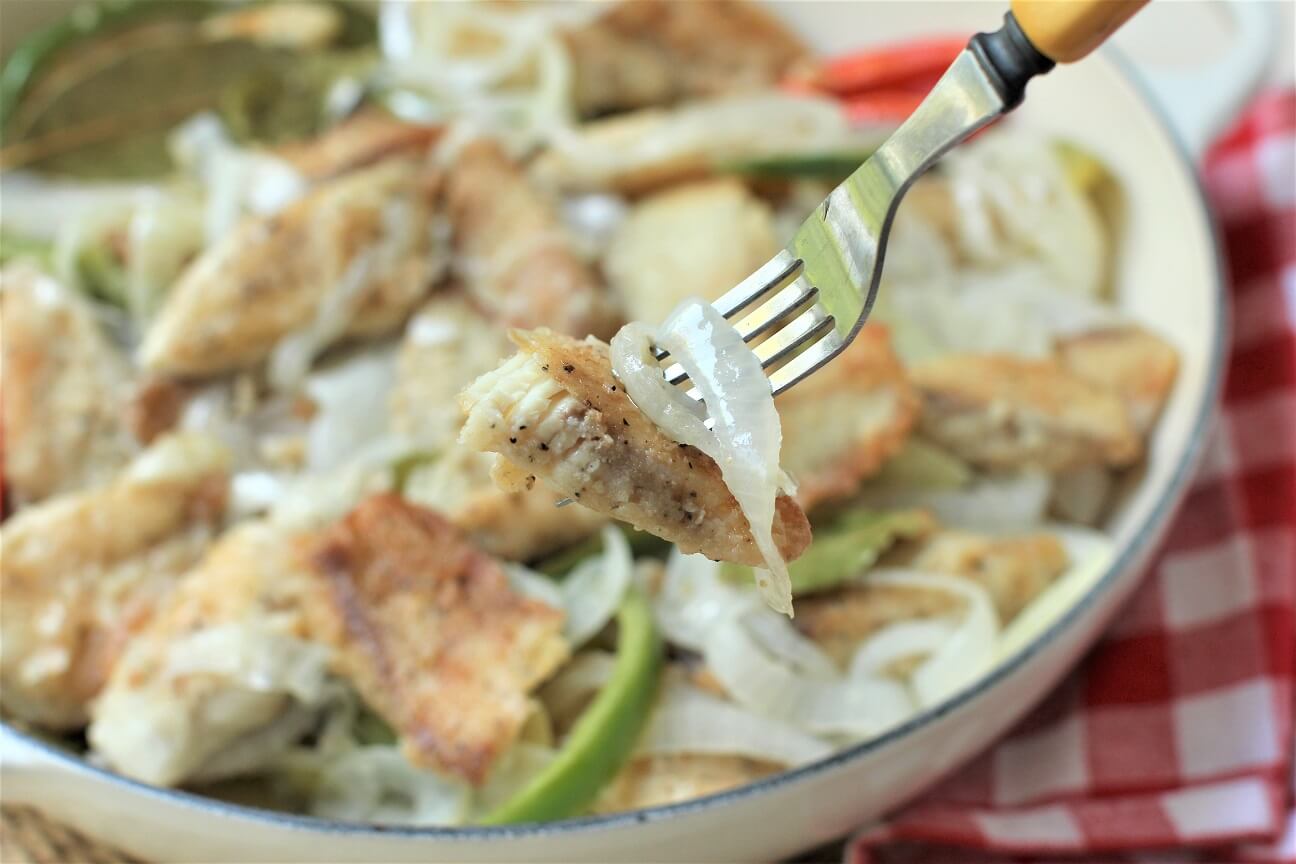 And this Guyanese fish dish is a winner - so simple but so unique in flavour. When I first read the recipe I thought the fish might taste pickled, but not so. The vinegar soaks into the lightly fried coating of tender tilapia fillets to become mild and mellow, lending just the lightest tang to the dish. Barely cooked onions and peppers add a toothsome counterpart to the silky fish, all coated in generous lashings of olive oil. You can adjust the heat to your tastes. Two hot peppers are added to the dish - you can keep them whole, or seed them and halve them to add a hint of heat. Or you can slice them up and cook them with the other vegetables to add pops of intense heat throughout the dish.

The beauty of this fried tilapia dish is that it is amazing served warm, and equally delicious served cold. I love that the batch is big enough for a warm dinner one night, and leftovers for a cold meal later on in the week.

We discovered that the tangy fried tilapia makes a delicious sandwich when large chunks of it are piled into a bun on top of a base of its chopped up onions and peppers, then topped with a spoonful of crunchy fresh coleslaw - what a tasty reward after climbing to the top of the Athabasca lookout last weekend.

If you want to add more fish to your diet, this is a delicious way to do it. Bring in a bit of Guyanese culinary tradition and discover a tasty new way to eat fish.

Kitchen Frau Notes: This recipe makes a large batch, so you have leftovers to serve cold the next day. If you want to make less, it is easy to halve the amounts listed and make only enough to serve 4.

This dish is delicious served hot or cold. Leftovers are great on buns the next day - chop some of the vegetables and layer them on a toasted bun, then pieces of the fish, and add some coleslaw, shredded cabbage, or lettuce on top - so tasty.

If you want the dish to be slightly less rich, you can reduce the oil to ¾ cup in total. 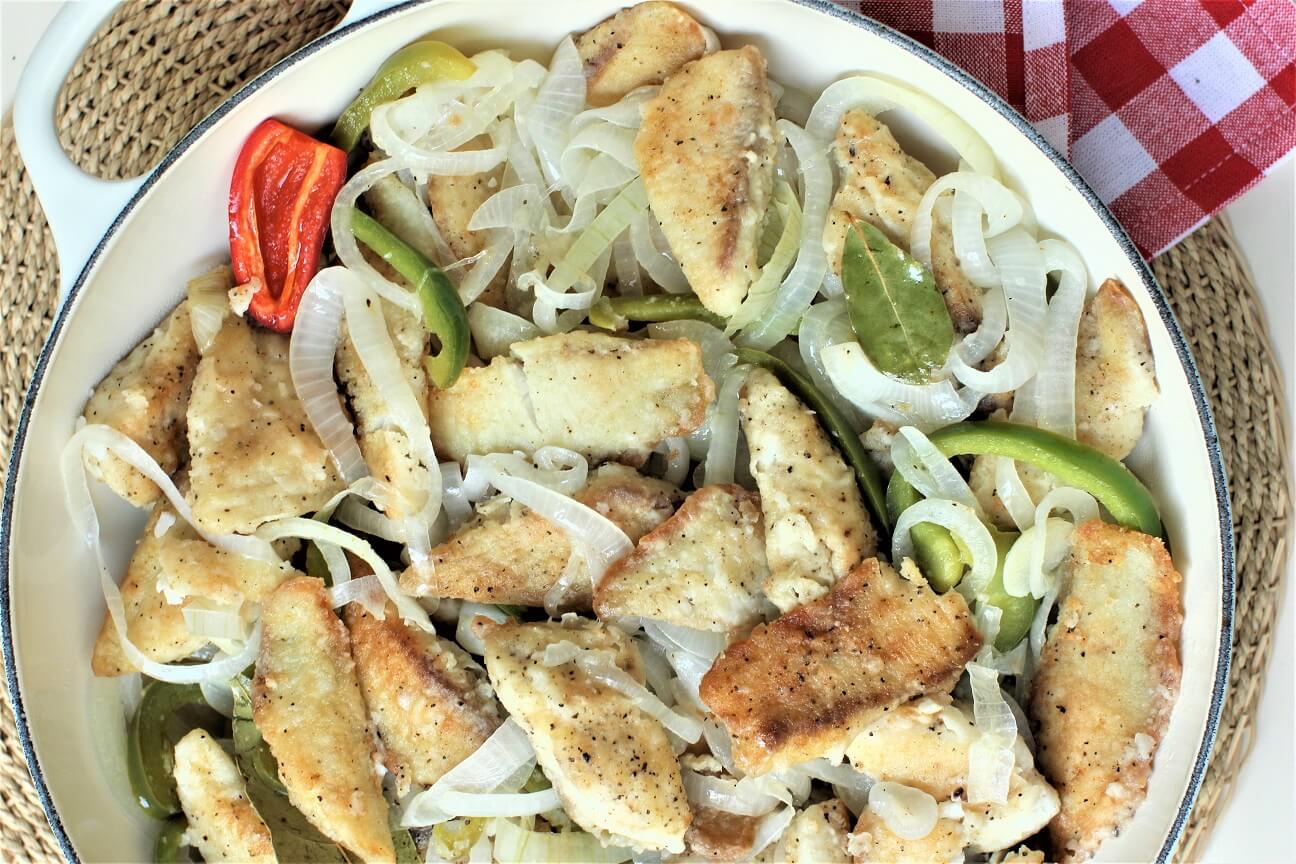 Cut the tilapia fillets in halves lengthwise, then cut each strip diagonally into 2 or 3 pieces.

Toss the cut fillets in the juice of the lemon or lime.

In a flat bowl or pan, stir together the flour and salt and pepper.

Measure out the 1 cup of olive oil in a measuring cup.

Heat about ¼ of the oil in a large skillet over medium-high heat. Dip the fish pieces in the seasoned flour to lightly coat all sides. Fry them in batches in the oil, in a single layer, turning to fry both sides to a golden brown. As each batch is done, remove the browned fish to a plate and add a bit more oil to fry the next batch. Remove the last fish to the plate when done.

Add a bit more of the olive oil to the skillet and turn the heat to medium low. Add the onions, pepper strips, garlic slices, and bay leaves to the oil. Leave the hot peppers in halves if you want to fish them out later (or serve them to the hot pepper lovers at your table) or slice them if you want them dispersed throughout the dish to add more heat. Add the hot pepper halves or slices to the onions. Cook until the onions are translucent and tender, but still white and uncoloured.

Check out all the wonderful Guyanese dishes prepared by fellow Eat the World members and share with #eattheworld. Click here to find out how to join and have fun exploring a country a month in the kitchen with us! 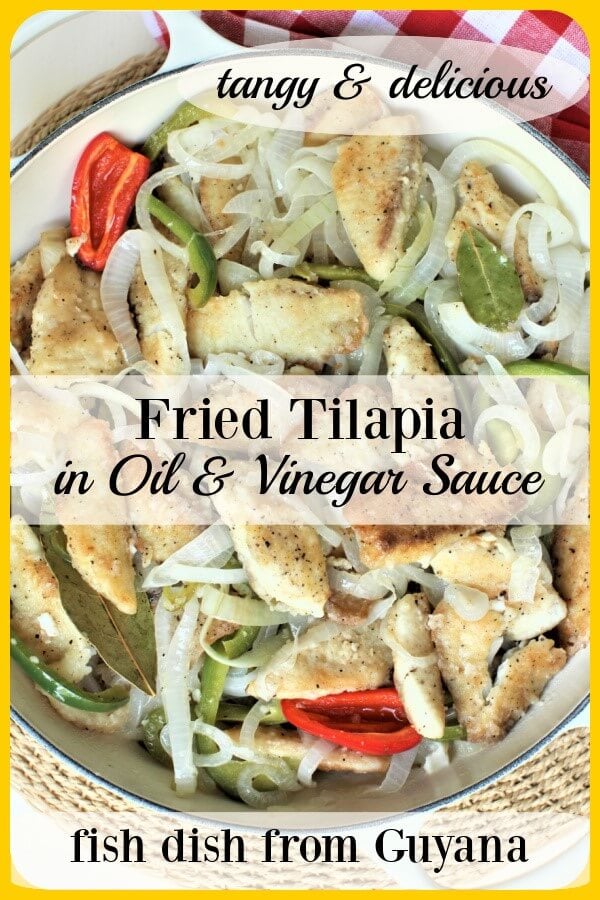