A classic Greek moussaka is a special treat. Layers of silky eggplant and rich meat sauce kissed with a whiff of cinnamon form the base. That's topped with a thick, creamy layer of cheesy béchamel sauce that just melts in your mouth. This is a dish to make when you want to impress, but it's also easy enough to make a big batch and have some extra to serve for a weekday supper. 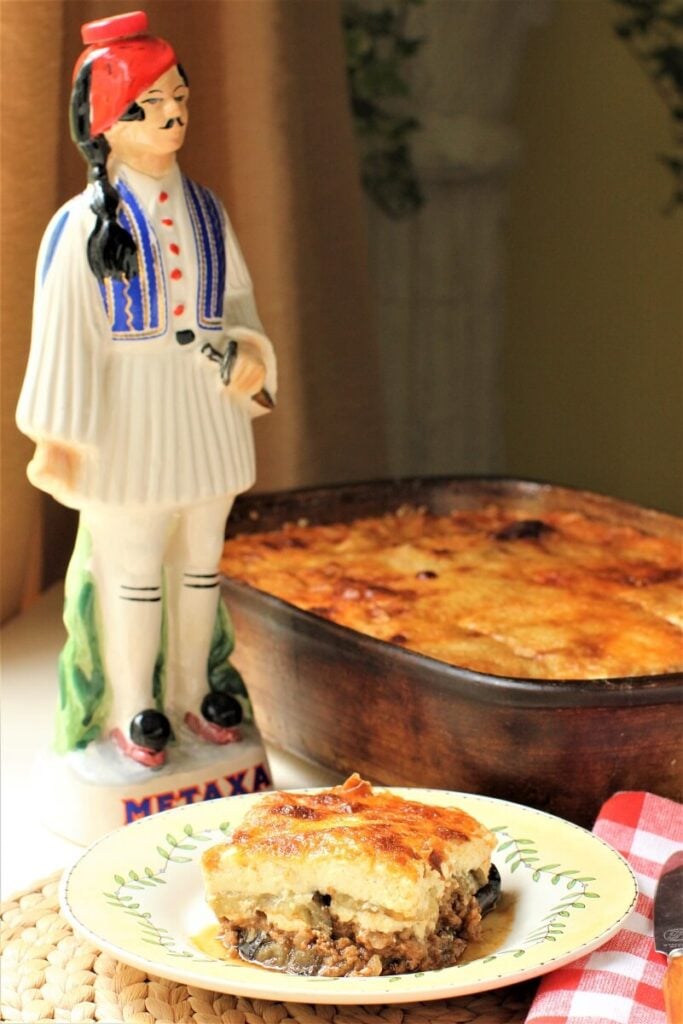 This month for our 'Eat the World' recipe challenge we head off to the sun-kissed shores of Greece, home of ancient cultures, rich mythology, and unsurpassed beauty. Greece has a special place in my heart - it's the first European country I visited - many eons ago. Raymond and I were dating at the time, and we each bought a large traveler's backpack, rolled up a sleeping bag, packed some shorts and t-shirts, and headed off on our first grand adventure. The experiences of that trip are vividly burned into my memory. No matter where in the world we've traveled since, nothing will ever come close to the wonder and discovery of a journey that opened my eyes to what mysteries lay waiting to be discovered in foreign lands.

The stunning beauty of Greece is a siren call that lures me back. Brilliant blue ocean only matched by an even more brilliant blue sky, dazzling white houses with aquamarine trim, pots of bright red geraniums, miles of silvery olive groves, stunning ancient ruins, donkeys laden with baskets, smiling old men playing cards in the shade, smiling old women leading the donkeys home from the fields, the ever present humming of the cicadas, the hot, hot sun beating down, cooling dips in that blue sea, and wonderful meals in every village, cooked the same way they'd been prepared for centuries.

We were living on a budget, so our meals were of necessity the simple peasant food that didn't cost much - unknowingly the best we could have found. We ate in little out-of-the way tavernas where the local fishermen and farmers ate, tucked at the edges of olive groves or in winding cobbled back streets. The strumming bouzouki music and heavenly aroma would call us to follow our noses to the promise of a feast for our stomachs and our senses. Large pots of meltingly soft meats and vegetables, stewed with lashings of olive oil and savoury Mediterranean herbs, simple but so rich with flavour, were prepared with love by the mamas and grandmas that made them the same way their mamas and grandmas before them did.

We'd seat ourselves at a small table decked with a checkered plastic cloth, a stubby burned down candle, and a decanter of red wine vinegar and fruity green olive oil. Every meal began with a Greek salad - not the Greek salad we eat here in North America, but a simple side plate with a few slices of fresh sweet cucumber, a pile of sun-ripened tomato chunks, maybe a bit of raw onion, and topped with a handful of salty black olives and some big crumbled chunks of feta. The plate would either already be dressed with a splash of vinegar and a liberal dousing of olive oil, or you'd do it yourself. No lettuce, no green peppers, no oregano, nothing else. Just cucumbers, tomatoes, olives, and feta. Simple. But so memorable. To this day I love my Greek salads just like that.

This would be followed by moussaka.

The two basic dishes - the equivalent of fast food in Greece - that were always on offer in every Greek taverna were a big tray of rice-stuffed baked tomatoes and a huge pan of moussaka. Oh, that moussaka! Rich ground lamb layered with lusciously silky eggplant, fragrant with that exotic taste of cinnamon in a savoury dish, all tucked under a dreamy blanket of creamy white custard - it was an intoxicating meal I couldn't get enough of. I'm sure we ate it almost every day (the fact that it was so cheap didn't hurt either). The flavours and textures were so new and exciting to me.

Fast forward a few decades, and I still love moussaka just as much. Yes, it takes a bit of work, and a bit of time to prepare, but it's simple if you break it down into its separate bits.

And it is so worth it. 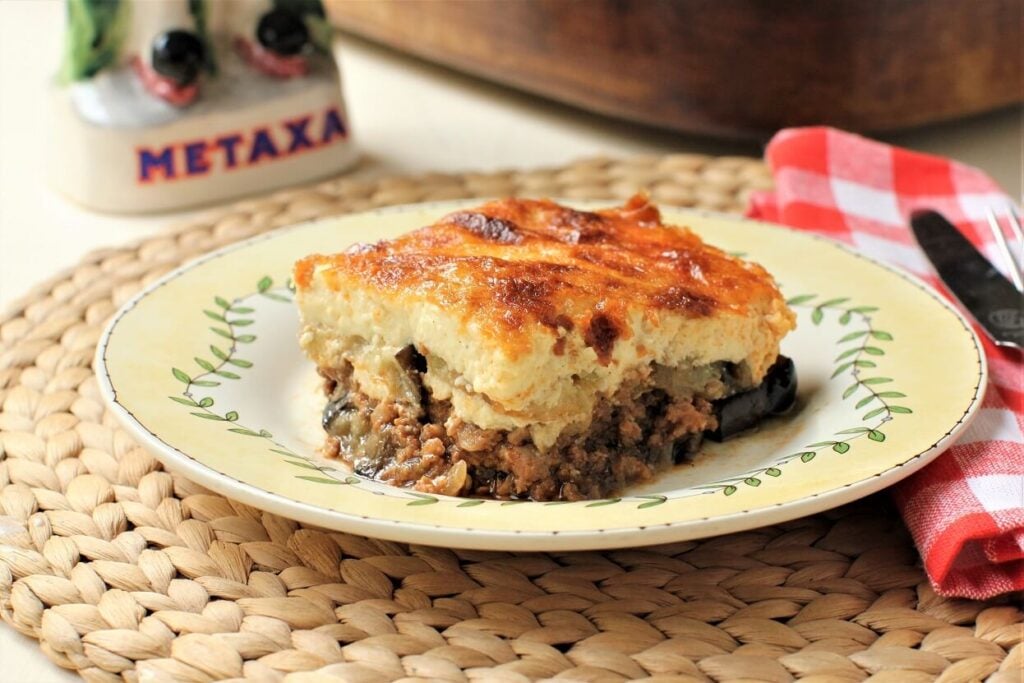 Making moussaka is definitely a labour of love - it involves several different components, but they aren't difficult to make and can be prepared ahead. While you're making the moussaka anyway, it's worthwhile making the full batch for serving a crowd, or make it in two smaller pans and serve one to your family or for entertaining a smaller group, and freeze the second pan for a special meal later.

Can You Make Moussaka Ahead of Time?

Yes! This is a great dish for entertaining. Make it ahead of time and refrigerate it or even freeze it and your guests will never know it wasn't made fresh just before they came. You have a few options, and they all make your life much easier:

How To Make a Moussaka

You will need three components which are layered to make a moussaka. Think of it as a Greek Eggplant Lasagna.

Instead of lasagna noodles, you're going to slice up 4 eggplants and brown them - not only healthier, but really tasty, too. Eggplants used to be quite bitter and needed to be salted to draw out the bitterness, but modern day eggplants have had the bitterness bred out of them so you no longer need to do that. Some people still salt the eggplants, then rinse them to remove the salt, in order to remove excess moisture, but I find you can do without that step if you cook your meat sauce long enough so that it is quite thick and doesn't add extra moisture to the moussaka.

The salted eggplant slices are also traditionally fried in oil - eggplants are oil sponges, and I find that simply broiling the eggplant slices makes for a much lighter moussaka without sacrificing any of the flavour (and it's less messy, too!). Once the eggplant is layered in the moussaka, you can't tell that the slices were broiled rather than fried. You could also make it even easier and grill the eggplant slices on the barbecue, so you can do them all at once.

The meat sauce for moussaka is a bit like a regular bolognese sauce, but it has less tomato, is cooked until it's thicker, and is flavoured with the Greek seasonings of oregano, cinnamon, and bay leaves. It is one rich and hearty sauce. Onions, garlic, and red wine help make it even more so.

Ground lamb is the meat traditionally used in Moussaka, but modern versions often use ground beef. If you don't care for the stronger taste of lamb, then beef is a good option for you. It's equally delicious.

And Make the Béchamel Sauce

It's just a fancy French name for a white sauce. But you'll need a lot of it because what makes a moussaka so luscious is that thick layer of silky, cheesy custard on top of it. This sauce is a little different than a normal béchamel sauce, because it is set with eggs, which you temper with a bit of the hot sauce before stirring in, so they don't curdle. It can also have a bit of cheese stirred into it.

Then, Assemble Your Moussaka

Place half the browned eggplants in a single layer in the bottom of a roasting pan, an extra-deep 9 x 13-inch pan, or two 9 x 9-inch baking pans. 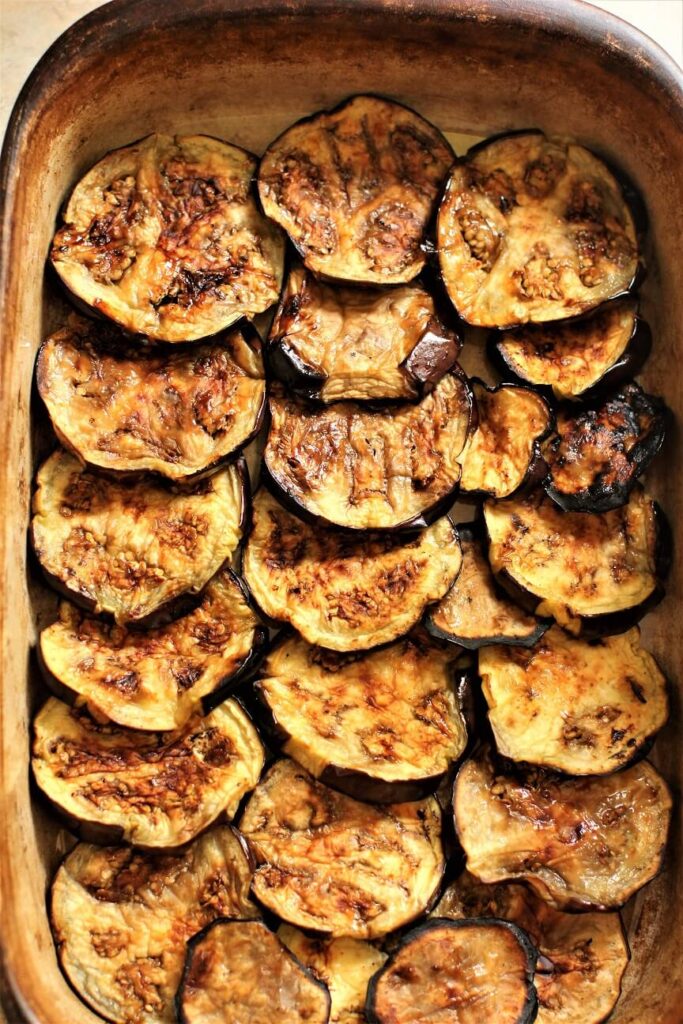 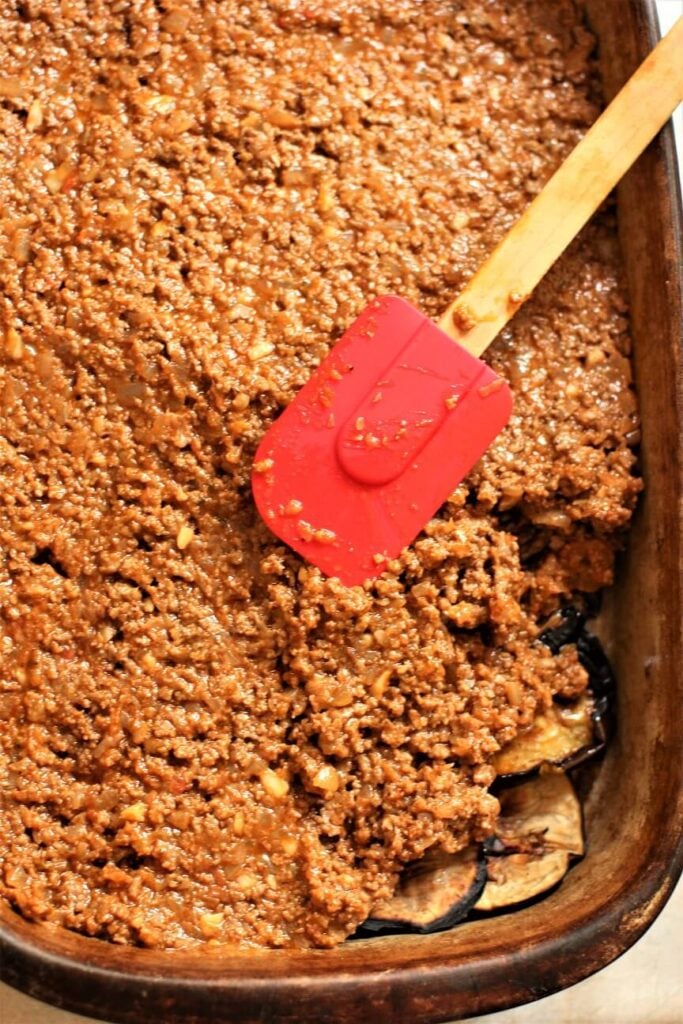 Pour on the béchamel sauce, and sprinkle with a bit of Parmesan cheese. 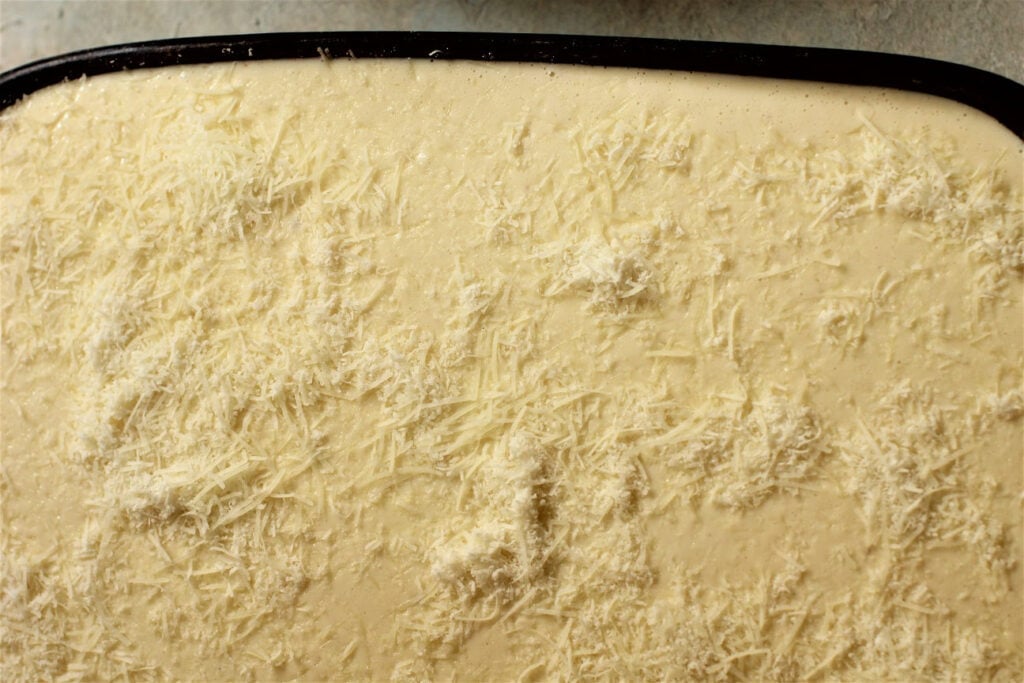 Now bake it to burnished golden deliciousness. What a mouthwatering dish of Greek comfort food! 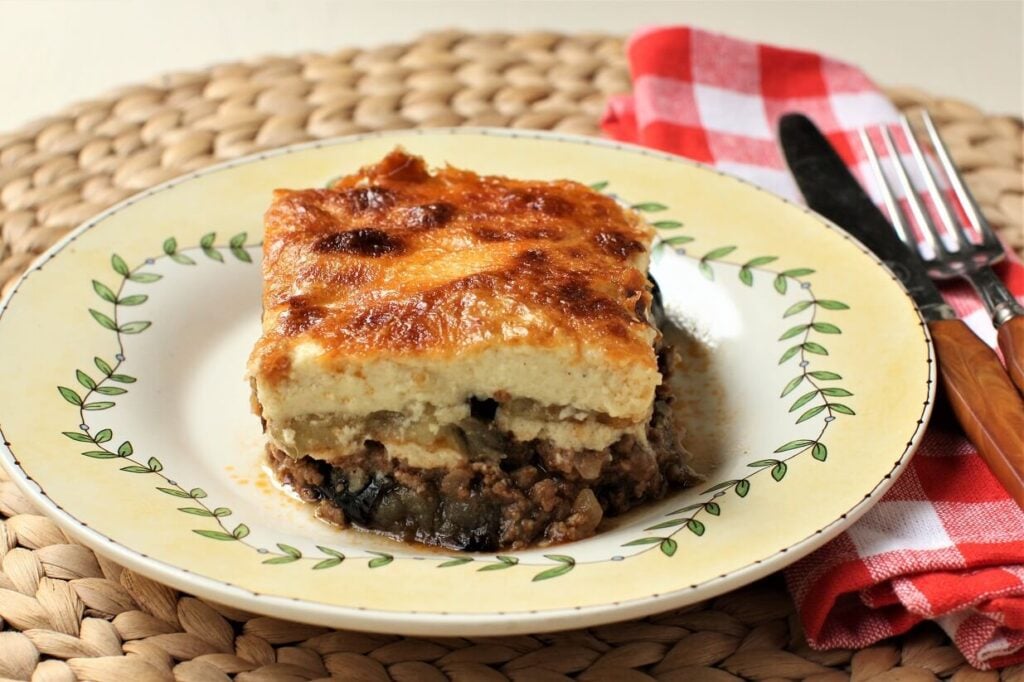 Pour yourself a glass of red wine. Put on a Greek music soundtrack. Loudly call out 'Opa!' and dig your fork through that creamy nutmeg-whiffed top layer and the silky eggplants interspersed within the rich meat layer. The rich tomato, herby oregano, and hint of cinnamon brings to mind the flavours of a sun-kissed Greek island with gnarly olive trees surrounding ancient ruins. There's a little taverna in the distance, wafting out delicious smells and the gentle strains of joyous bouzouki music are calling you to come and pull up a chair. 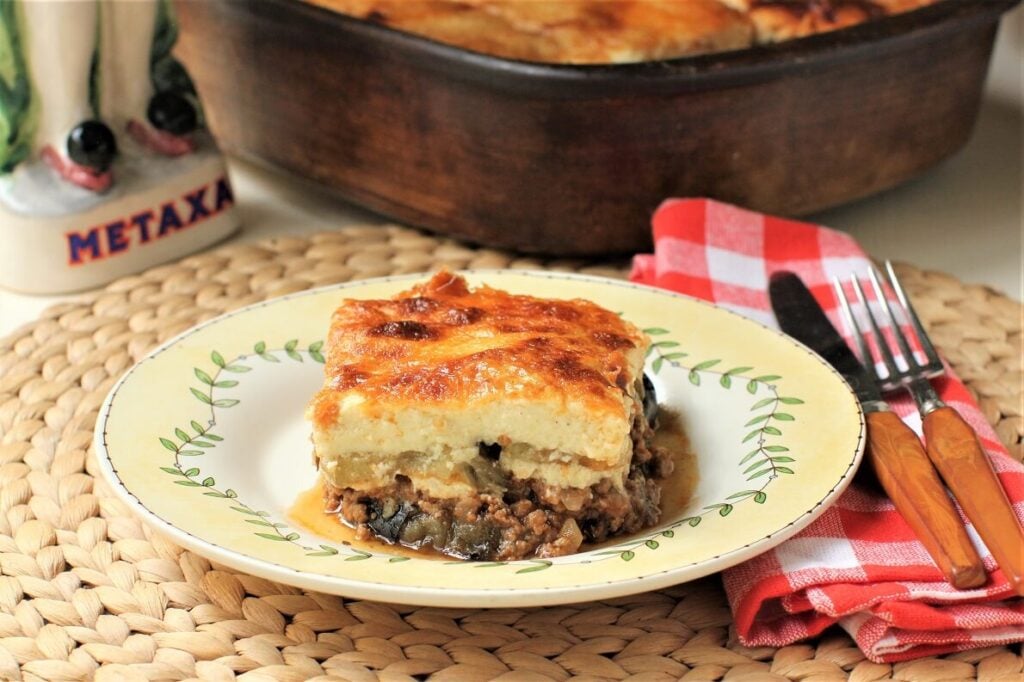 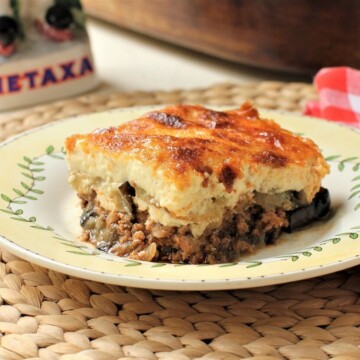 Margaret Bose Johnson
A classic Greek moussaka is a special treat. Layers of silky eggplant and rich meat sauce kissed with a whiff of cinnamon form the base. That’s topped with a thick, creamy layer of cheesy béchamel sauce that just melts in your mouth. This is a dish to make when you want to impress, but it’s also easy enough to make a big batch and have some extra to serve for a weekday supper. You can prepare some of the components ahead.
No ratings yet
Print Recipe Save for Later
Prep Time 45 mins
Cook Time 45 mins
Resting Time 30 mins
Total Time 2 hrs
Course Main Course
Cuisine Greek
Servings 8

To Assemble the Moussaka:

We like a combination of half ground lamb and half ground beef, but either meat alone works fine, too. The size of pan used here is important. This is a large recipe (feeds 8 to 10 people). It's best to use a large 11 x 14-inch pan or large roasting pan which has deeper sides. If you use a regular height 9 x 13-inch pan, it will not be quite big enough and the moussaka may bubble over. You can also make the moussaka in two 9-inch square pans, and freeze one (either baked or unbaked) if desired. The recipe is easy to halve, but while you're making the mess anyway, I recommend making the whole recipe in two smaller pans and freezing half, or make it in a large pan and freeze leftover portions for later meals. If baking directly from frozen, add an extra 30 minutes to the baking time and bake the moussaka covered, then uncovered for the last 30 minutes. Plan for enough time to allow the moussaka to cool for 30 to 45 minutes after baking before you cut it, so the topping sets and slices smoothly.
Tried this recipe?Let us know how it was!

Check out all the wonderful Greek dishes prepared by fellow Eat the World members and share with #eattheworld. Click here to find out how to join and have fun exploring a country a month in the kitchen with us! 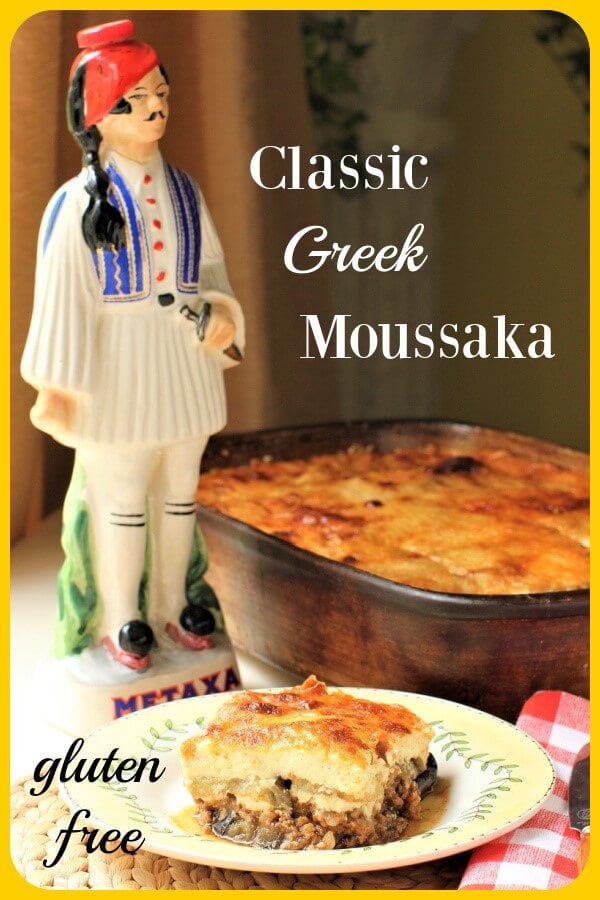