Bermuda Fish Chowder is a hearty seafood soup, the national dish of Bermuda. It's loaded with complex flavours, lots of vegetables, and chunks of tender white fish. A splash of dark rum and a few shakes of hot pepper sauce give it that extra Bermudian touch. 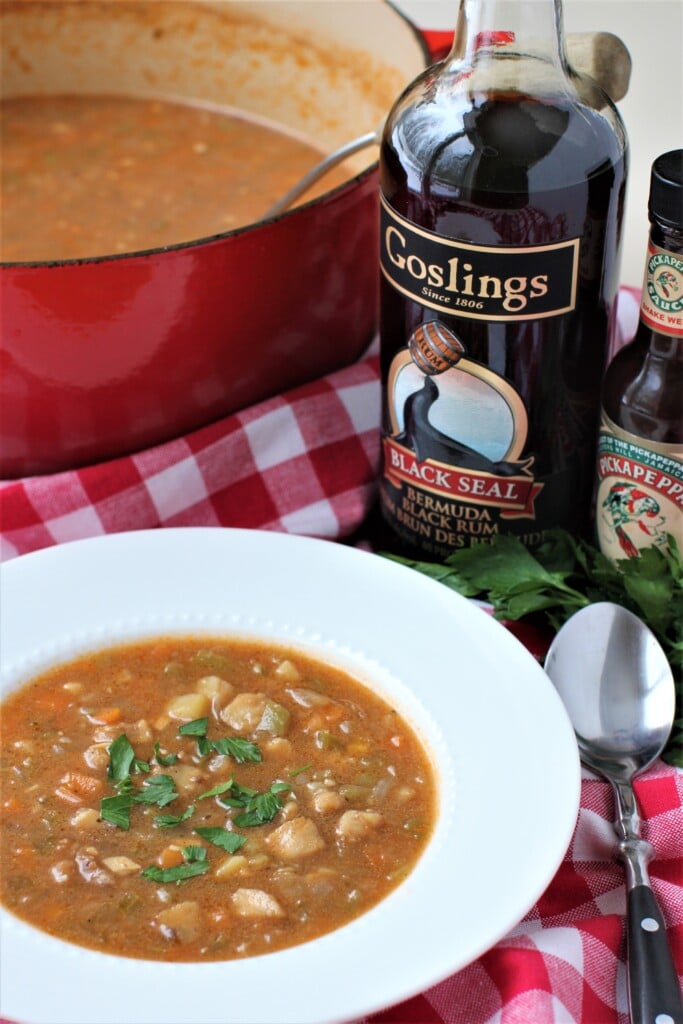 This month for our Eat the World recipe challenge we're exploring the tropical islands of Bermuda. This little archipelago consists of 7 main islands (connected by bridges) and 170 named islets and rocks. It is actually not considered part of the Caribbean, but is a self-governing British Overseas Territory located in the western North Atlantic Ocean. Bermuda is known for its spectacular pink sand beaches, perfect year-round weather, and amazing food.

Not surprisingly, seafood plays a big role in Bermudian cuisine, with tuna, wahoo, and spiny lobster being some of the most popular local catches. Bermuda fish chowder is one of the quintessential offerings found on every menu - it's considered the national dish of Bermuda. This long-simmered, hearty chowder has as many variations as there are cooks on the islands, with each family priding themself on their own fiercely-guarded recipe, usually passed on through the generations. Every year in Bermuda there is a contest to see which restaurant or local cook makes the best Bermuda Fish Chowder, and every year a different version is the winner. 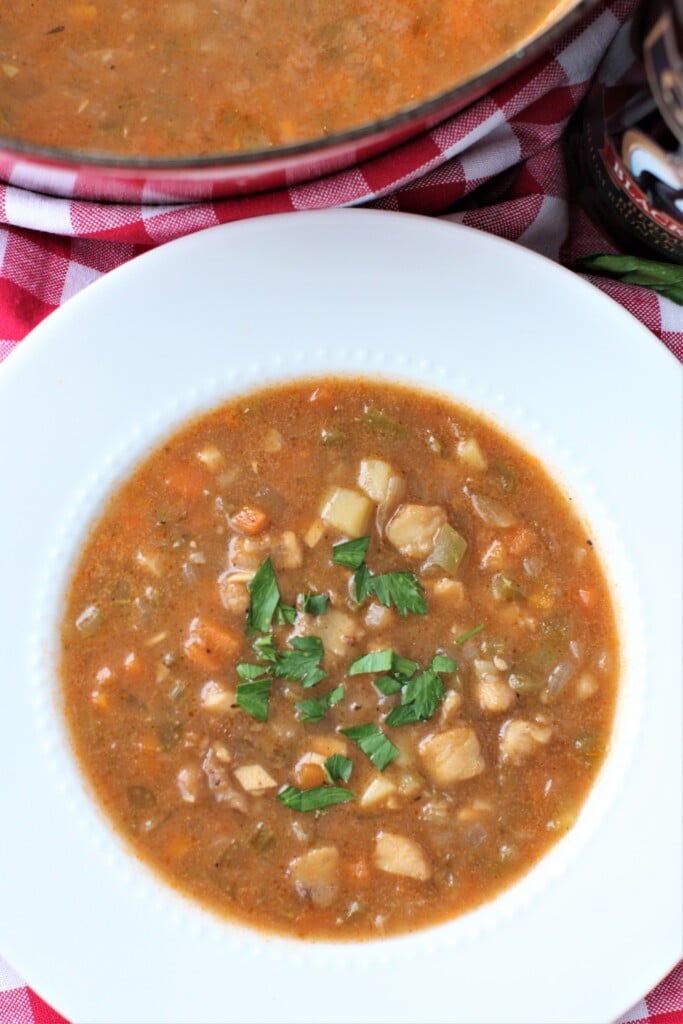 The Bermudian fish chowder is different than chowders common in mainland North America in that it is not cream-based and has only a small amount of tomato in it. It is much lighter than sauces thickened with cream. The broth is made mainly from fish stock, although islanders will often also use beef broth in making this soup. Bermudian fish chowder is slightly thickened, but not too thick, and the pieces of vegetables and seafood in the chowder need to be uniformly small. The chowder is made spicy with the addition of the local Bermudian hot sauce made of sherry, spices and fermented pimento peppers (known as 'sherry peppers sauce') and spiked with the island's dark rum (usually Goslings Black Seal Rum). I couldn't locate the traditional Outerbridges Sherry Peppers Sauce, so I substituted with Jamaican Pickapeppa Sauce, but your favourite hot sauce passed at the table will be a good sustitute to get that fiery heat into the soup.

I chose not to cook my chowder as long as some recipes stated, finding that the flavours were nicely melded even in a shorter time and the fish kept its shape. In many of the longer-simmered traditional versions, the fish cooks until it falls apart, making the soup more fine-textured. However, you can choose to cook it as long as you like. 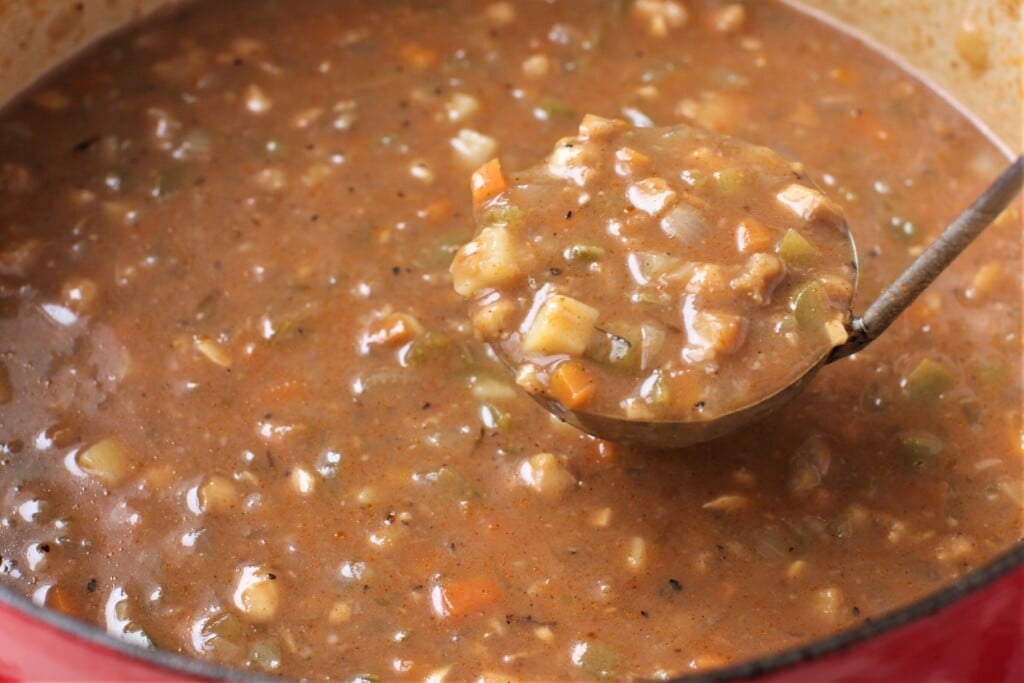 Bermuda Fish Chowder is known for its rich brown broth (with only a small amount of tomato added) redolent of island spices such as thyme and allspice. It's loaded with an abundance of finely chopped onions, carrots, celery, and green pepper.  Dark rum and sherry peppers hot sauce are added in to the soup, and then set onto the table so everyone can add more of each to their taste.

Rich and complex, Bermuda fish chowder will transport you to the islands. The palm trees sway in the breezes, the waves crash, and you are sitting at an outdoor table under a beach grass awning, feasting on a bowl of this soup. Fresh fish brought in on the morning's boats has been loving simmered with local island produce and spices. And a shot of dark rum is just the thing to toast another glorious day in the sun. 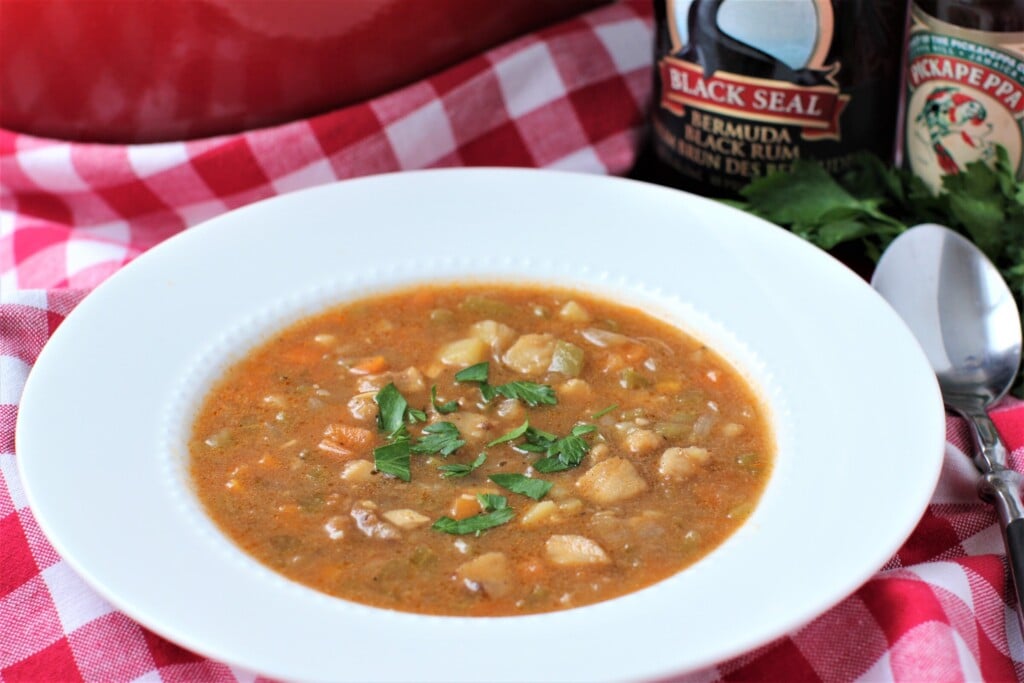 Check out the other wonderful Bermudian dishes prepared by fellow Eat the World members and share with #eattheworld. Click here to find out how to join and have fun exploring a country a month in the kitchen with us! 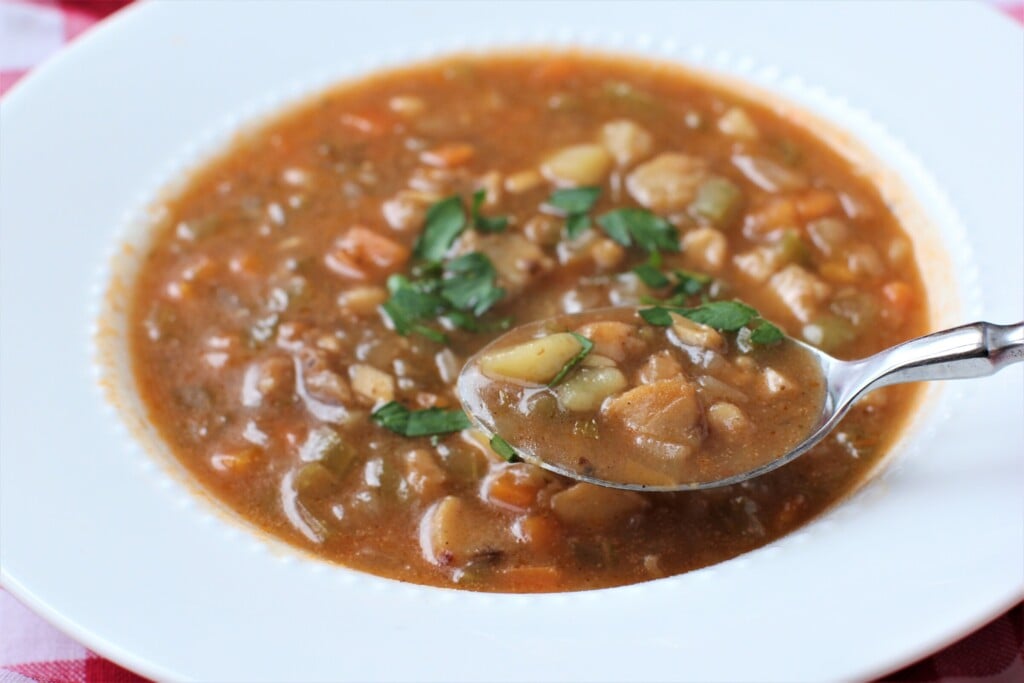 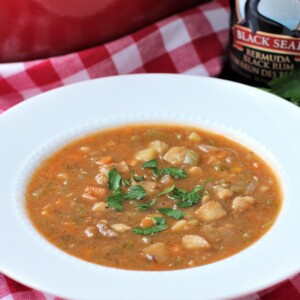 The vegetable and fish amounts are not exact - feel free to add more or less, as desired. Add other seafood to your liking if you wish, like shrimp or other shellfish.
Keyword Bermuda, Bermuda rum, Bermudian, chowder, fish chowder, fish soup, rum, soup, soups
Tried this recipe?Let us know how it was! 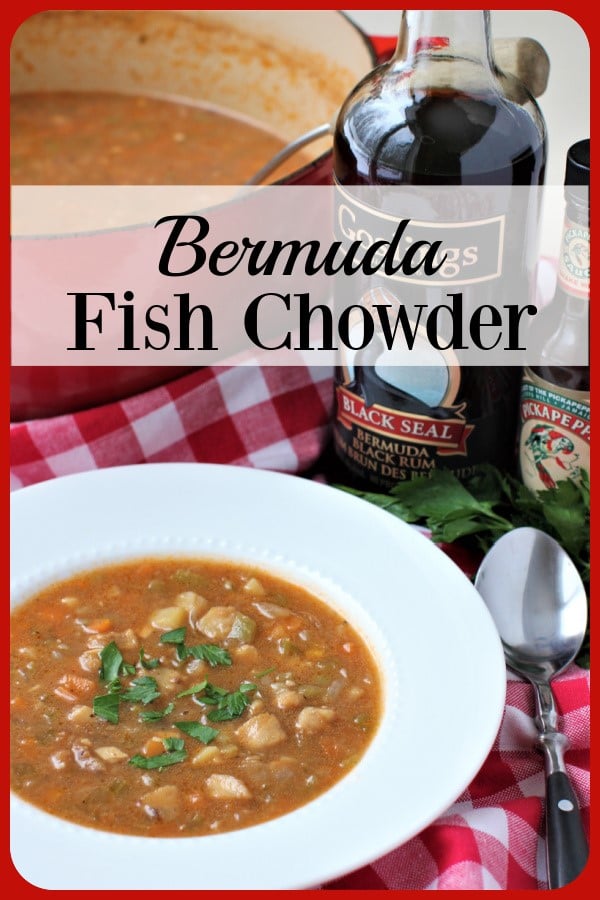