Homemade vanilla pudding is so simple and easy to whip up, you'll wonder why you ever needed to open up a package. Just six ingredients stirred together in a pot produce this beloved treat. Smooth and silky on your tongue, it's lightly sweet but sumptuously rich with vanilla. Try not to polish off the whole bowl yourself!

This week Eric and I made a classic homemade vanilla pudding. The ingredients and technique are simple, but there's nothing simple about that rich, creamy vanilla taste.

In only a few more minutes than it takes to prepare a box of packaged pudding, you can have a bowl of your own homemade vanilla pudding made with wholesome milk, egg, butter, and vanilla, plus a bit of cornstarch, sugar, and salt. Just these simple ingredients come together in perfect vanilla pudding harmony. Let your willing kid chef stir and cook up the ingredients and there'll be a grin of pride on their face. Eric tells me he doesn't like other kinds of pudding, but his new favourite is this homemade vanilla one.

First you measure and add the cornstarch, sugar, and a pinch of salt into a saucepan, then stir them together.

Crack an egg into a bowl and whisk it til it's frothy. Then pour in the milk and whisk it all together. Most recipes call for two egg yolks, but we simplified it and just added a whole egg - the pudding was awesome! (And no wasted egg white.) 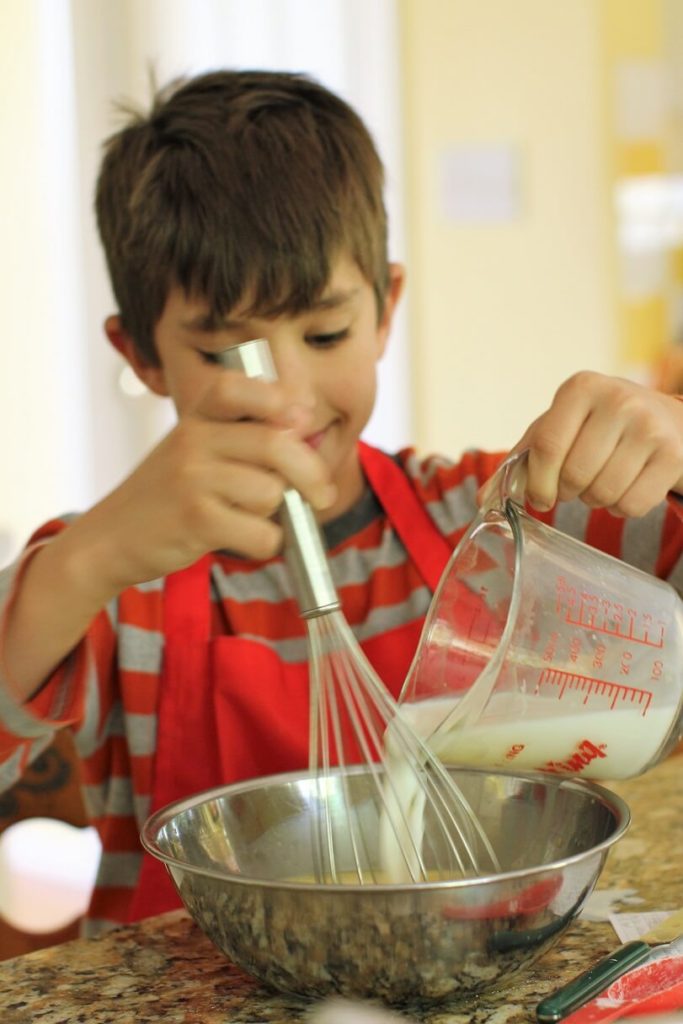 Then you cook and stir. It's when the magic happens. Pretty soon the pudding thickens to this lovely thick, creamy silkiness. Keep stirring. 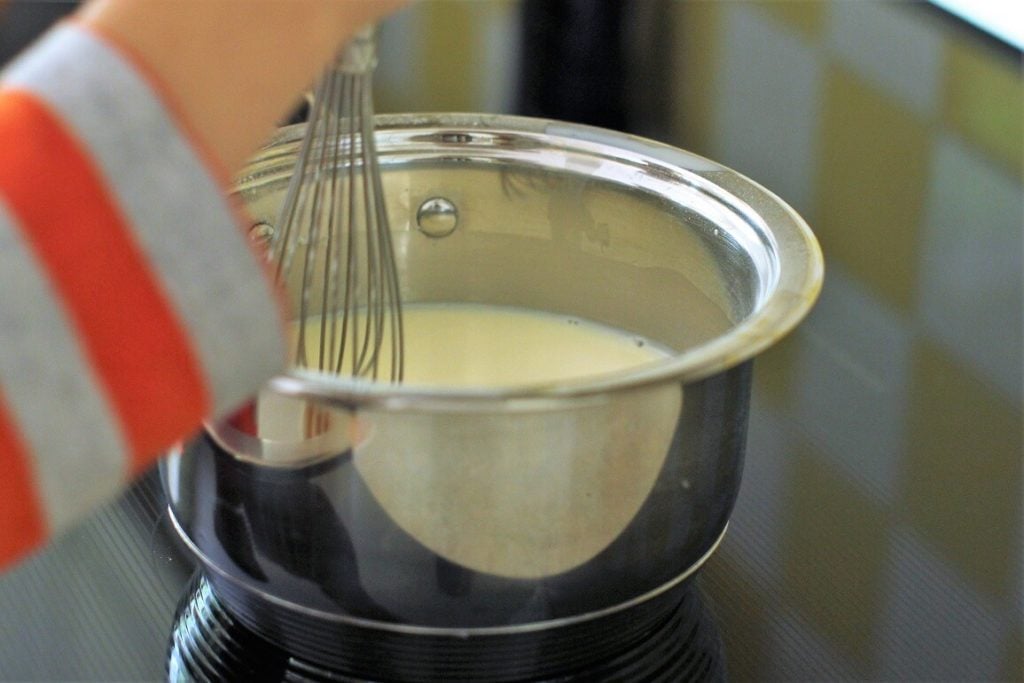 Once the pudding's thick, take it off the heat and stir in a lump of butter and spoonful of the important stuff: pure vanilla extract.

Let it cool a bit (though you may want to sneak a spoonful while it's warm). Cover it with plastic wrap and chill it. 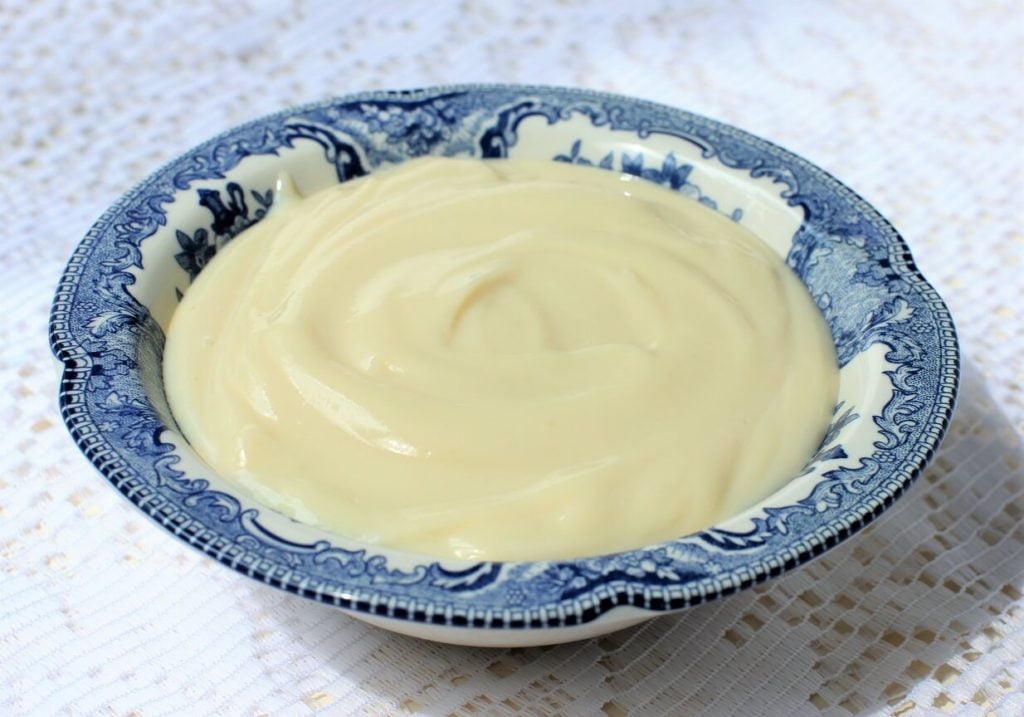 You can pour it into little bowls for a fancy look. 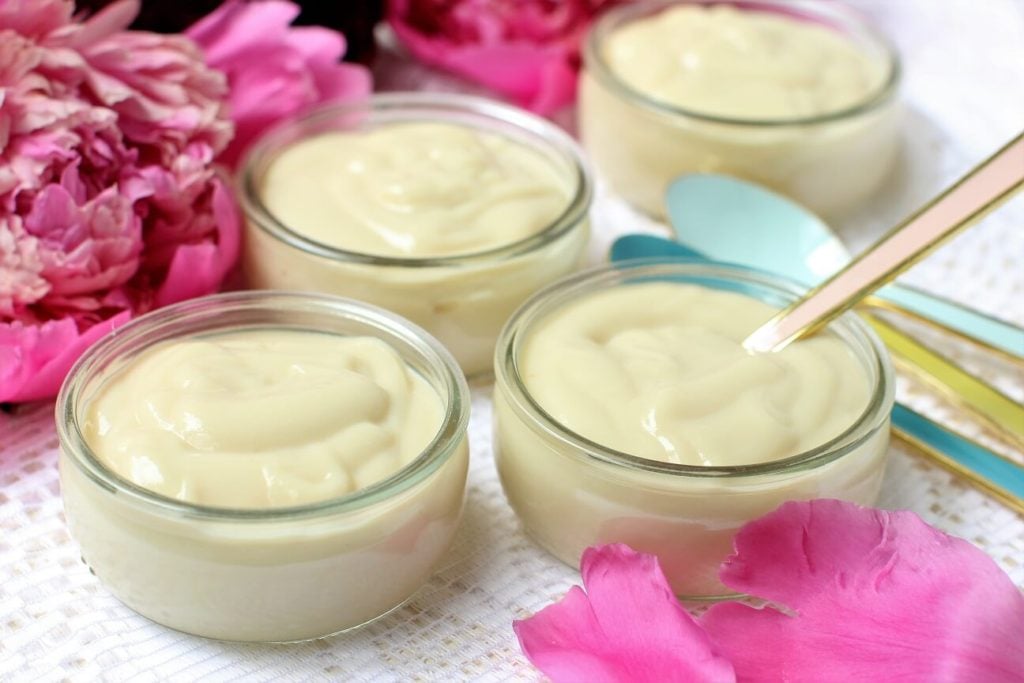 It's luscious and creamy any which way. We had some of it layered with chocolate avocado pudding, cacao nibs, and toasted pecans as a decadent parfait. 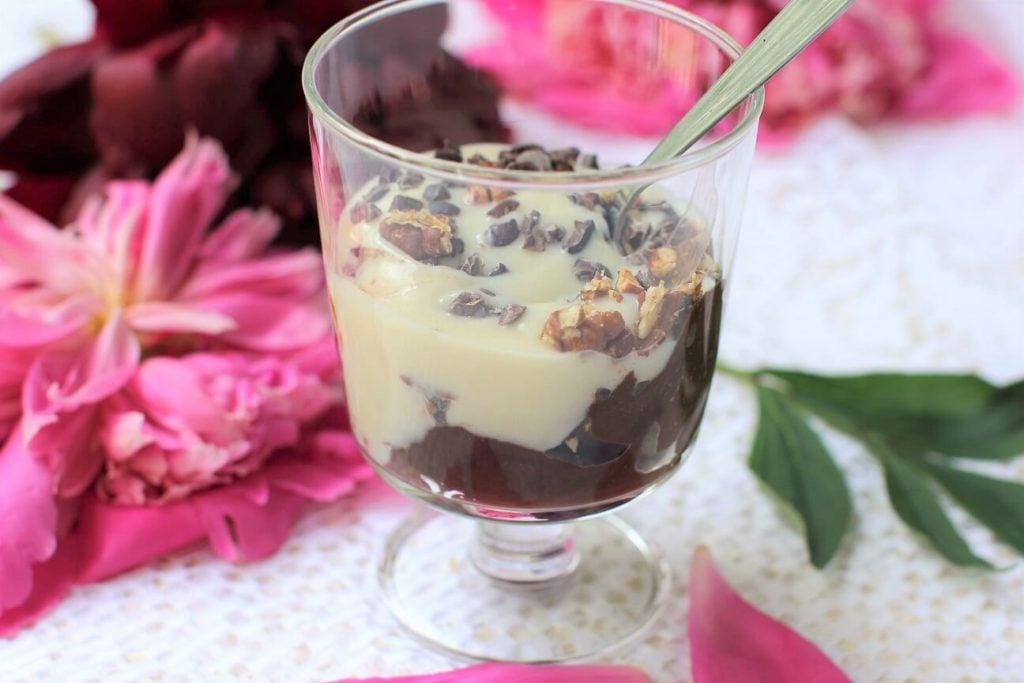 But mostly we just enjoyed it plain with a spoon. 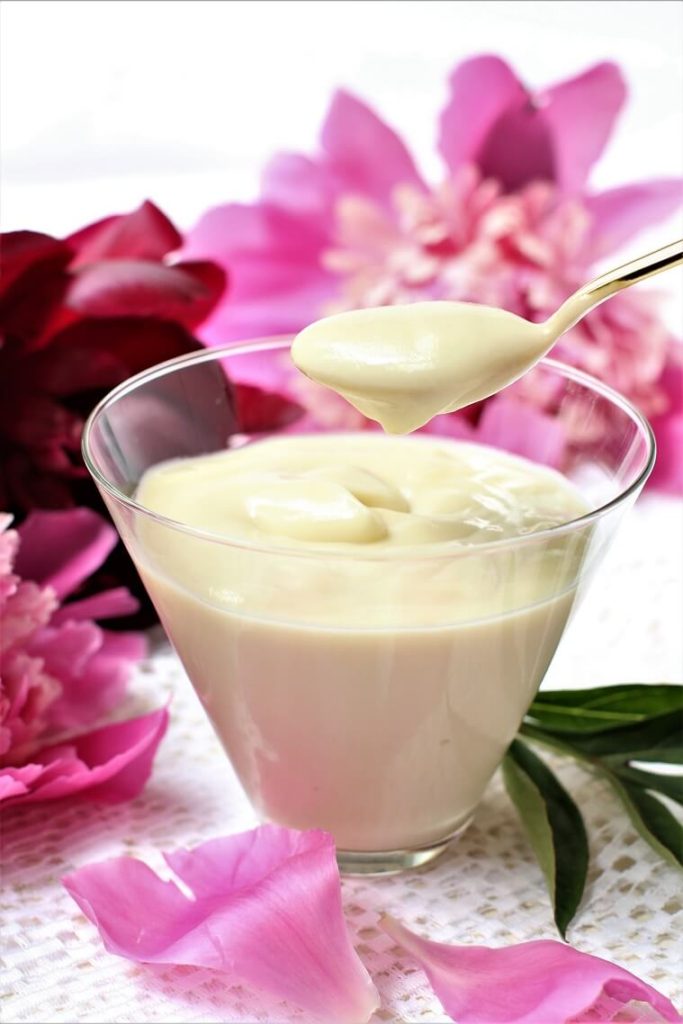 Homemade pudding is the best! 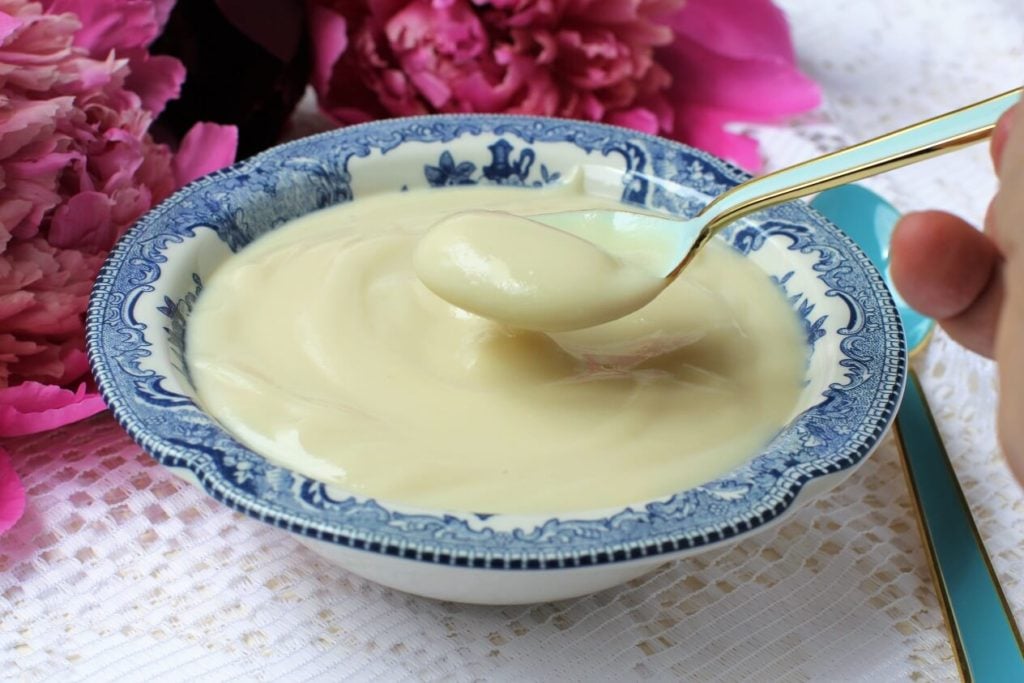 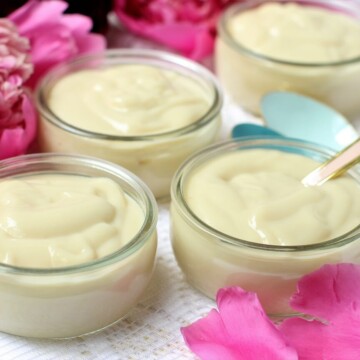 by Margaret Bose Johnson, Kitchen Frau
Homemade vanilla pudding is so simple and easy to whip up, you'll wonder why you ever needed to open up a package. Just six ingredients stirred together in a pot produce this beloved treat. Smooth and silky on your tongue, it's lightly sweet but sumptuously rich with vanilla.
Print Recipe Save for Later
Prep Time 5 mins
Cook Time 5 mins
Total Time 10 mins
Course Dessert
Cuisine American, Canadian
Servings 4

This recipe makes four servings of homemade vanilla pudding - I recommend you double it while you're dirtying the pot and make enough for eight. I betcha it'll disappear in the wink of an eye. Serve the pudding with some fresh berries on top or with a dollop of whipped cream and some crushed roasted pecans. Or have a plop of it on a pie or cake instead of ice cream. It's pretty fantastic any which way. To get the ultimate smooth pudding, pass it through a fine-meshed sieve either before or after it has cooled. That will remove any bits of thickened egg or soft lumps that might be hiding in the pudding. If you're just going to scarf down big bowlfuls of it, there's no need to sieve it, but if you're serving it for fancy company, well, you know . . . .
Keyword cooking with kids, homemade pudding, homemade vanilla pudding, pudding, vanilla, vanilla pudding
Tried this recipe?Let us know how it was! 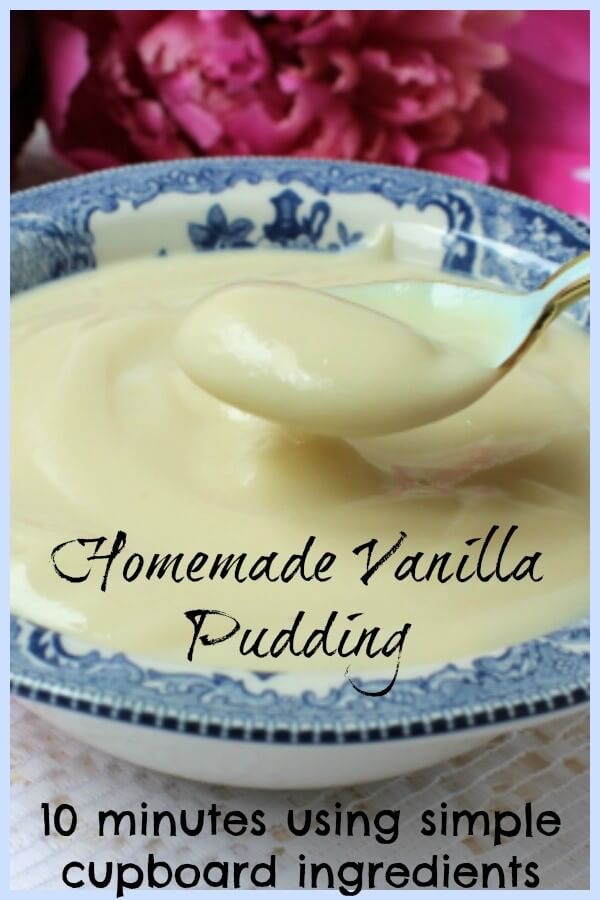 « German Chocolate Cake Recipe to Turn Any Day into a Celebration
Lohikeitto (Creamy Salmon and Potato Soup): A Taste of Finland »