A creamy, dreamy Honey Vanilla Quinoa Pudding and a savoury, flavour-packed Quinoa Onion Frittata are just two of the many delicious things you can make with quinoa - a complete-protein superfood grown high in the Andes Mountains. My brother-in-law experimented with growing quinoa in northern Canada. Come take a peek at his process, and try these fabulous recipes while you're at it! (Skip to recipes.) 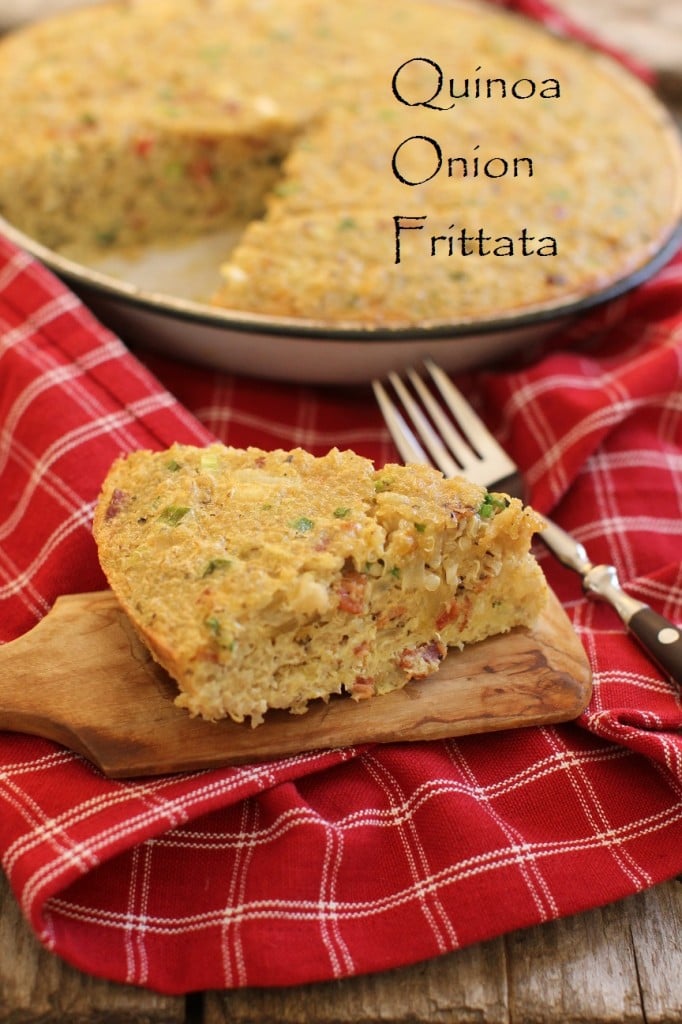 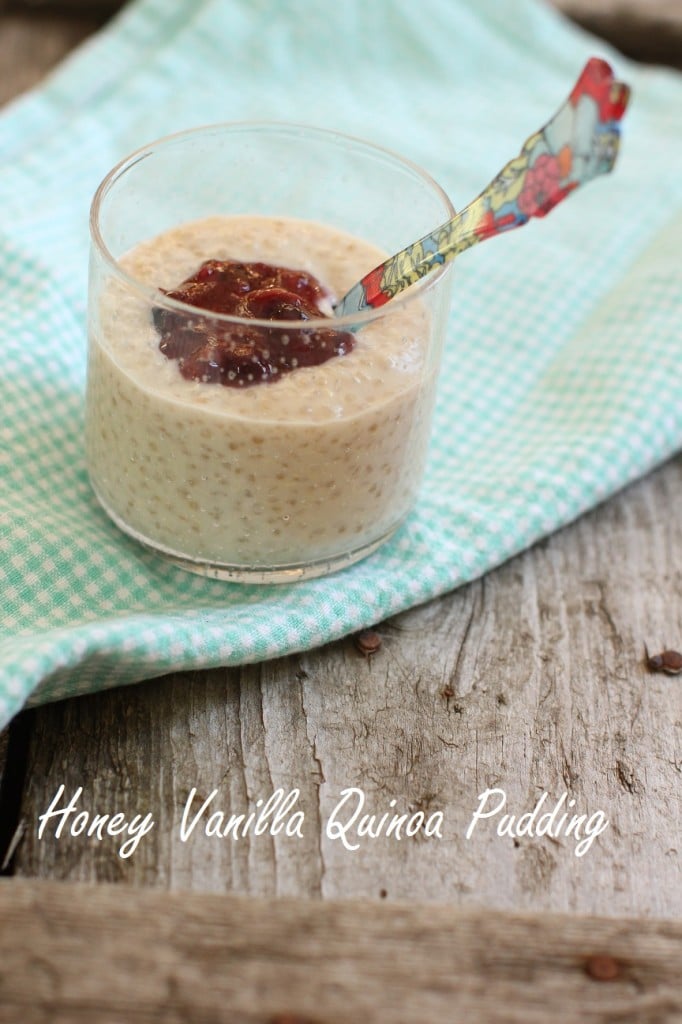 This month's topic is: A Canadian Harvest 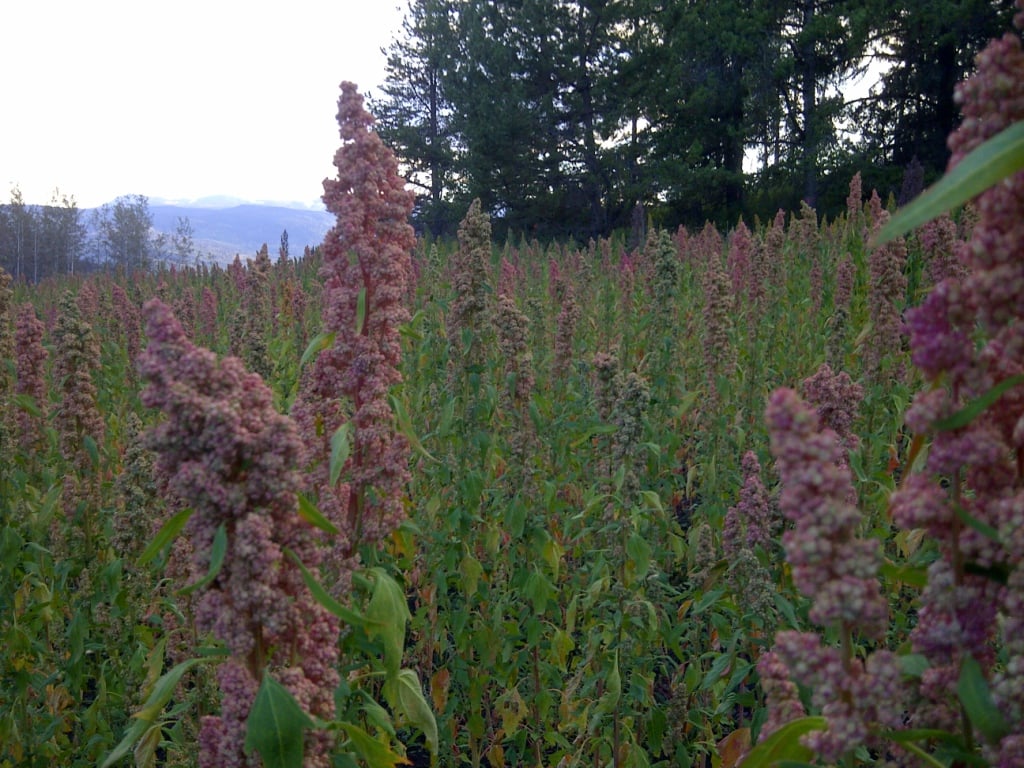 We Canadians are a tough lot - with a big dose of entrepreneurial spirit. It's that spirit and vision that has allowed us to push the limits and constantly come up with new ways to not only adapt to a tough climate, but to thrive and forge new trails - opening up diversity for ourselves.

Take, for instance, a northern British Columbian agrologist and forester with a curiosity, drive and commitment to experiment with new crops that can be grown in the tough winter climate and beautiful mountainous country around Smithers, B.C. Steven Kiiskila is my brother-in-law, and by day works behind a desk at a government job for the forestry department. However, after-hours, this summer, he could be found at his piece of land, nurturing and tending a small-plot experimental growth of quinoa, and this fall he can be found in his home, hand-harvesting, drying and testing the results of his labours.

This is where it all starts.

Change comes about because of the behind-the-scenes thinking, researching, planning, implementing, experimenting, reviewing, and rethinking done by people with new ideas. Breakthroughs and strides in any field don't happen by magic - but sometimes magic does happen in the process. And in agriculture - this process takes time. And patience.

Steven started his research long before he planted his first seeds. In Canada there is a small, growing, (no pun intended) group of quinoa farmers in Saskatchewan, but no quinoa had been grown in Smithers before. Steven thought the relatively cool climate and mountainous terrain of northern B.C. was similar enough to quinoa's growing conditions in South America that its success in Smithers would be a reasonable possibility.

So, he researched the quinoa growing process, found a parcel of sandy-soiled land, and sent for seven different varieties of seed. He prepared a 50' x 100' plot and planted the seeds.

A week later the first stalwart seedlings popped up.

As the seedlings grew, they needed hoeing and care. Enlisted for the job were my sister, Rosalinda, and their three teenage sons (I'm sure they were eager and willing workers. . . wonder why there's no pictures of them, hmmm?)

Quinoa (Chenopodium quinoa) is a hardy plant, well-suited to the high altitude and cold, dry climate of the Andes Mountains in South America. It is not a grain (which is a grass), but is a broadleaf plant in the goosefoot family, which includes spinach, beets, and the weed, lamb's quarters. It is the seed of the plant which we eat. The young quinoa greens can also be eaten in salad or cooked like spinach. The mature seeds are nutritionally impressive - containing all eight essential amino acids and high levels of calcium, phosphorus, magnesium and iron. Quinoa is high in fiber, yet easy to digest. It is one of the few plant foods that are a complete protein.  This is good news for vegetarians, and the fact that quinoa is gluten-free makes it a wonderful food for people with gluten sensitivities or allergies.

Quinoa is slow-growing at first, then grows quite quickly and can easily reach a height of 5 to 7 feet (over 2 metres). 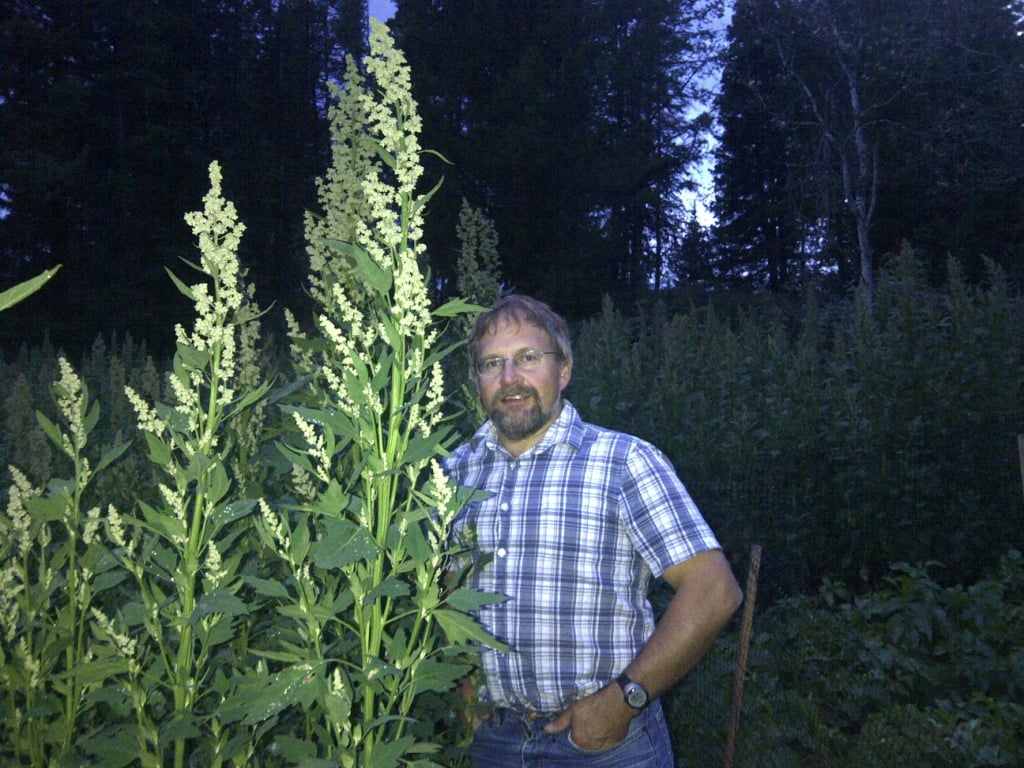 Steven planted the quinoa seeds in rows 2 feet apart, with seedlings thinned to 6 - 8 inches within the rows. He used no ferilizer. The plants needed to be weeded when they were small, then again when they were about 2 feet tall. Since quinoa is very drought tolerant, it didn't need irrigation. The bitter taste of the saponin in the mature leaves and on the seeds was a natural repellent to deer and birds. The healthy plants in Steven's plot also easily withstood a small amount of insect damage. Of the seven types of quinoa he planted, the Redhead variety performed the best.

After the first hard frost killed the leaves, the quinoa plants were ready to harvest. At this point the seeds were hard enough that they could just be dented with a fingernail. To be completely ready, they should have been too hard to dent. Several weeks ago, after a later-than-usual October 24th frost, Steven and Rosalinda harvested their quinoa crop.

This was a different kind of harvest - no swathers, combines or grain trucks involved. They cut down the tall plants by hand, then cut off the top two feet which contained the seed heads.

They brought these inside to finish drying. Now came the tedious and labour intensive second part of the harvest - stripping the dried seeds from the panicles by rubbing them between their hands. After that Steven winnowed them, pouring what he had collected out of a rubber tub and onto a sheet spread out on the ground. A fan blew in front of the quinoa to carry the bits of dried flowers, stems and leaves into the wind while the seeds fell to the sheet.

He's not quite finished threshing all his crop yet, but Steven estimates he will end up with about 75 pounds of usable quinoa - not bad for 1/10th of an acre of experimental crop. An average yield of a good crop is 1000 pounds per acre. 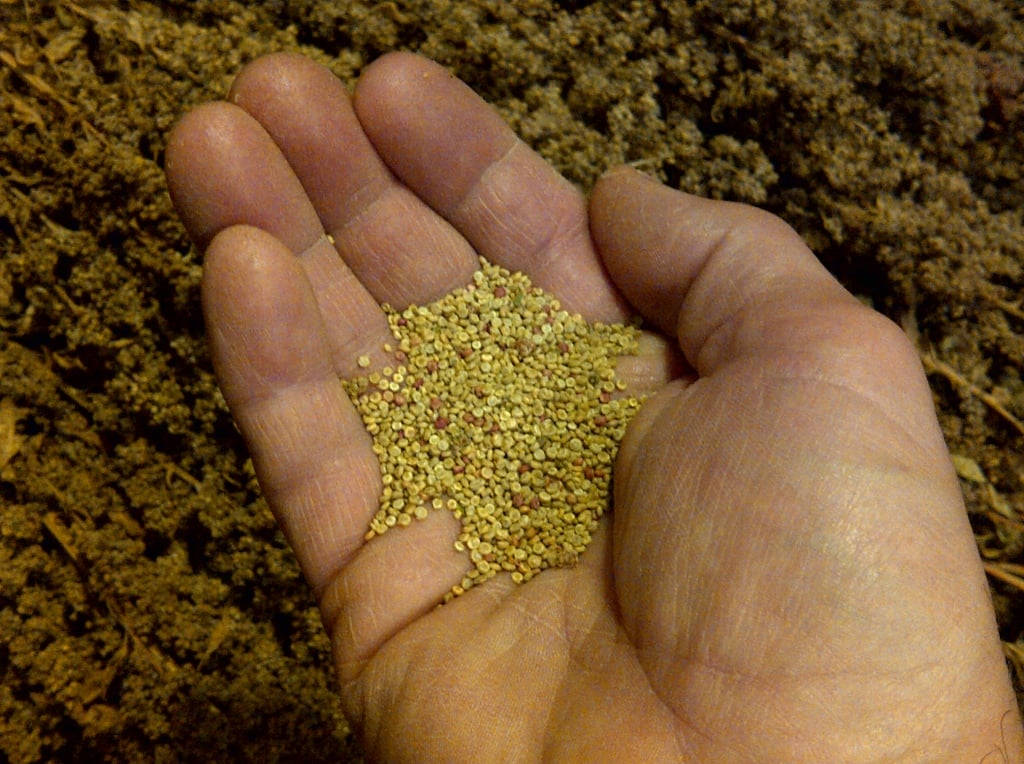 Even after the pieces of leaves, stem and other debris had been winnowed away, a thin, bitter covering of saponin still covered the seed. Large scale processors use a modified rice huller to remove the saponin from the seed, but Steven ended up using the washing machine to remove the saponin. He placed small amounts of quinoa in pillowcases, tied knots in them and ran them through the cold wash cycle. He first ran the washing machine with vinegar instead of detergent to clean it. Then the quinoa was dried and ready to store or cook.

Steven’s quinoa was an experimental crop grown on a small scale. The climate in northwestern B.C. may be too humid to fully dry the seeds in the field, so commercial production of quinoa in Smithers will need some rethinking and modification, but to this intrepid agriculturist, scientist and entrepreneur that is all just part of the process. It was an experiment that produced a winter’s worth of edible golden reward.

. . . . edible gold which can be cooked and used in many wonderful ways. The following recipes for a savoury and versatile Quinoa Onion Frittata and creamy Vanilla Honey Quinoa Pudding are a small sample of what you can do with this tasty seed.

Kitchen Frau Notes: I like to cook up a big batch of quinoa and keep it in the fridge or freezer ready to use for tossing into salads, soups, eggs, hamburgers or meatloaf, and desserts. It keeps in the fridge for at least 5 days, and keeps several months in the freezer. I measure and label it in freezer bags in 2 or 3 cup portions. It only needs a quick microwave thaw to use it. See how to cook it here, and a couple salad recipes here and here.

In the frittata a few slices of bacon are used instead of oil as the flavourful fat to saute the onions. Because quinoa is such a good protein, one slice of this tasty frittata is very satisfying. It also works well for breakfast or brunch. Leftovers are great stored in a container and packed in the next day's lunchbag.

The honey vanilla pudding is luscious and creamy and not too sweet. An extra drizzle of honey on top when serving it intensifies the honey taste, if you like. Pure vanilla extract is on my must-have list. A bottle will last you a long time and is definitely worth the extra expense. There is nothing worse than putting in the work to make a lovely homemade pudding and having the chemical aftertaste of artificial flavour lingering in your mouth.

I find this pudding is better served warm, as the quinoa gets more firm if it is refrigerated. Just rewarm it slightly in the microwave or on the stovetop if you're serving any leftovers. It tastes lovely with a little fruit or berries on top. In the photo I used my Saskatoon Peach Preserves. 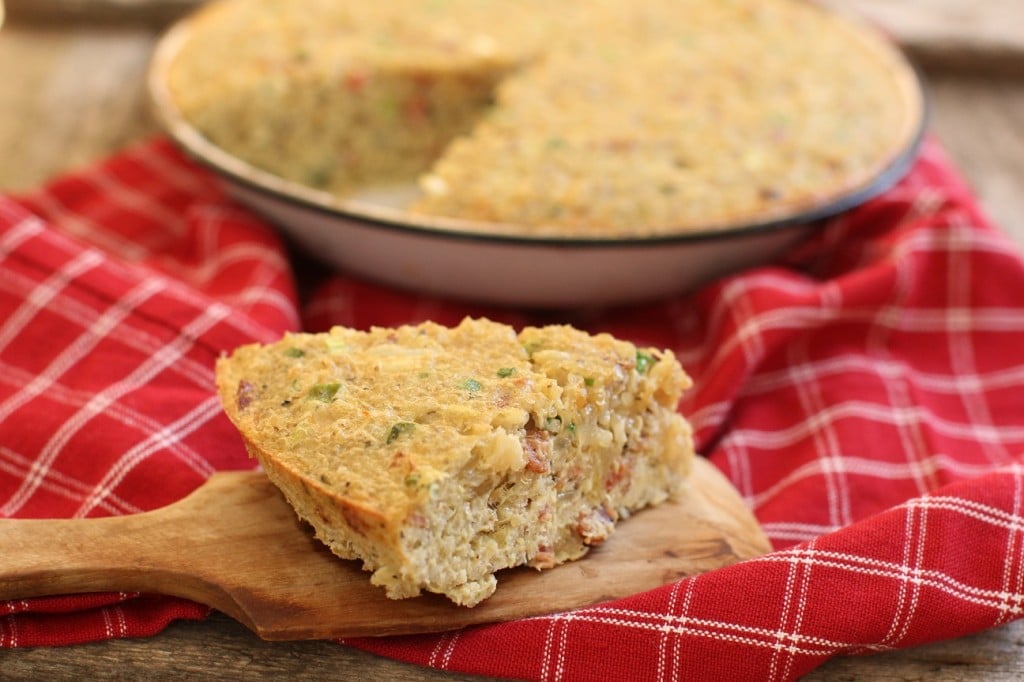 Dice the bacon by stacking the slices atop each other, cutting them in half lengthwise, then slicing them crosswise into ½-inch/1cm pieces.

Saute the bacon pieces in a heavy skillet, set over medium heat, until they are nut brown and crisp. Do not drain off the bacon fat. Add the diced onion and dried thyme and saute until the onion is translucent and just starting to get golden, about 5 minutes. 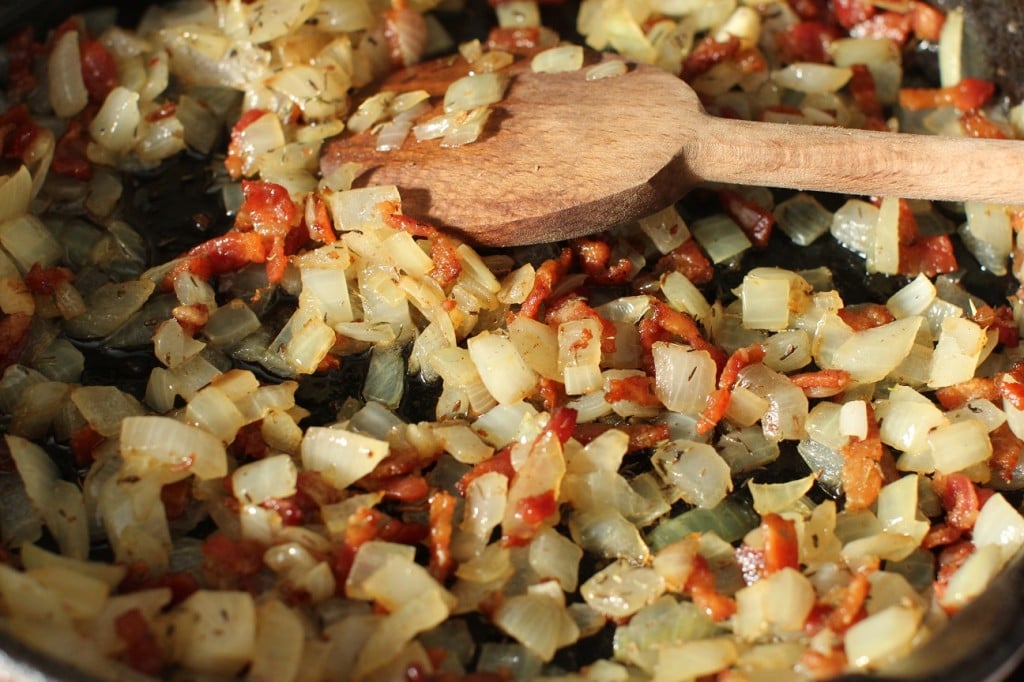 While the onion is cooking, place the cooked quinoa into a large bowl. Add the salt, pepper, mustard, bay leaf powder and green onions. Toss well to combine.

In another bowl, beat the eggs well with a stick blender, whisk, or beater.

Add the cooked bacon and onion to the spiced quinoa, scraping in all the flavourful bits from the skillet with a rubber spatula.

Pour the beaten eggs over the quinoa, and stir to combine it all. Pour the mixture into the prepared baking dish. 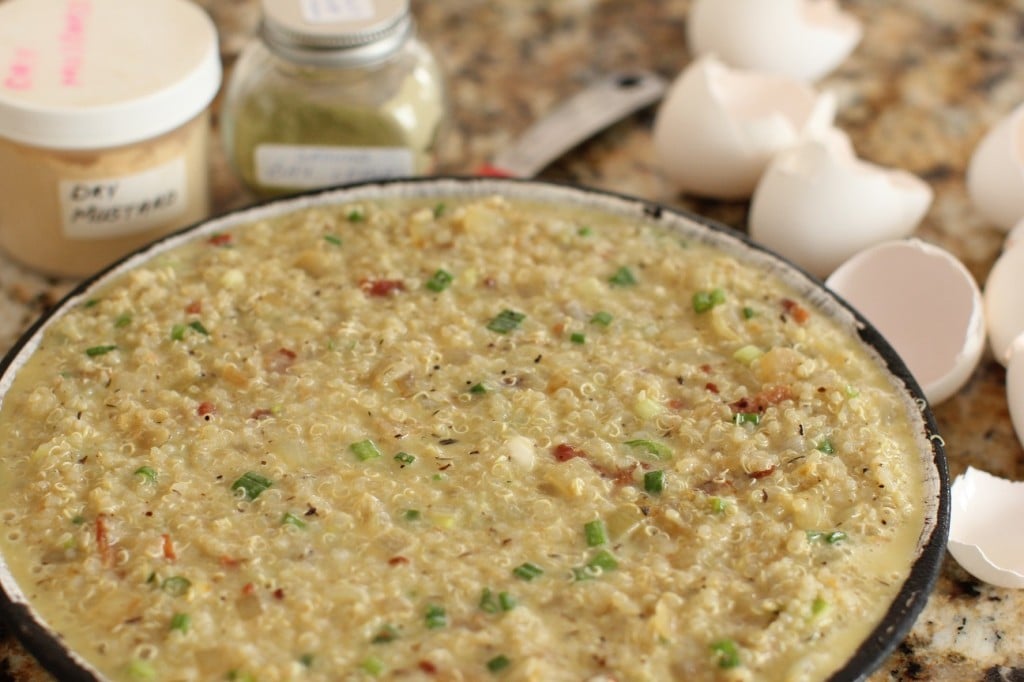 Bake for 35 to 40 minutes (5 minutes less if you use a glass pan) or until the center of the frittata feels almost firm and only jiggles slightly if you move the pan. It will firm up as it cools. 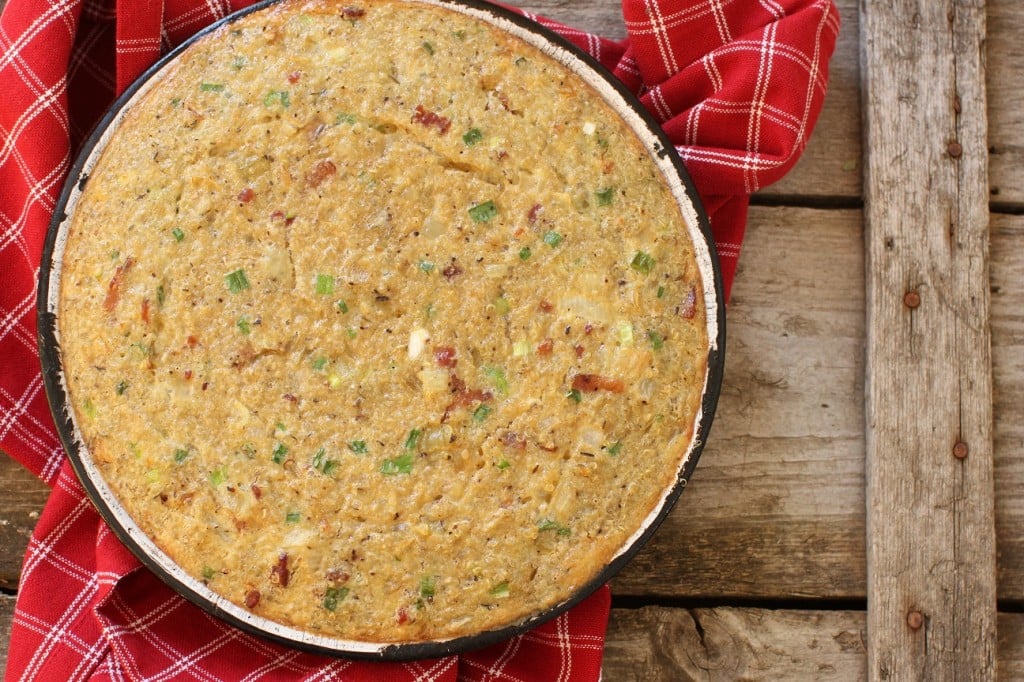 Let cool in pan 10 minutes before cutting into wedges to serve. Can be served warm or at room temperature. 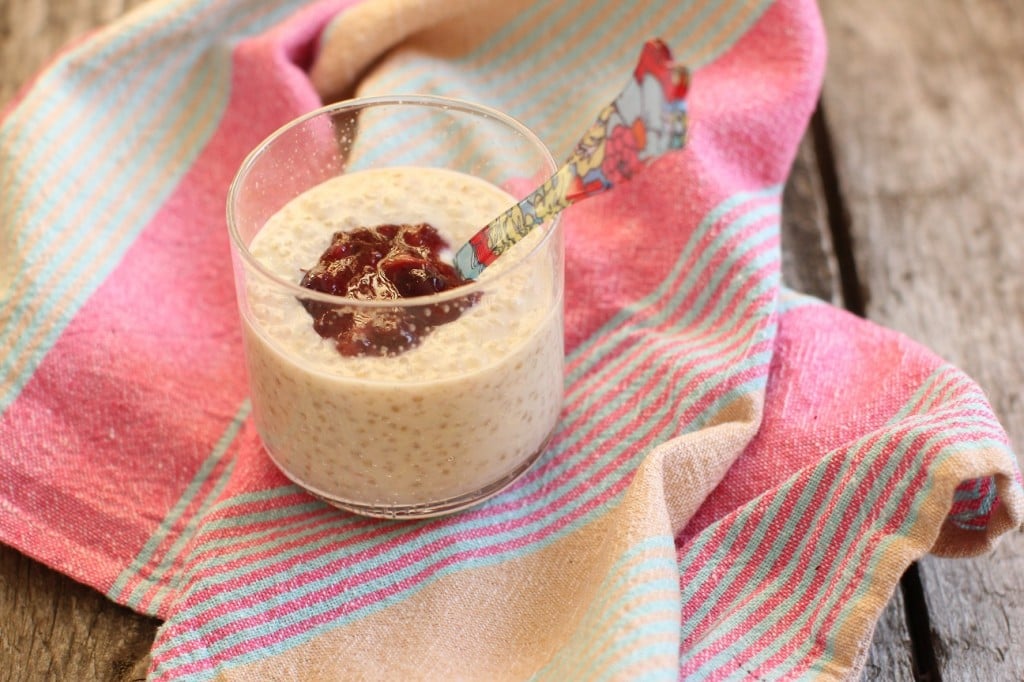 Rinse the quinoa well, and combine it with the water and 2 teaspoons of the vanilla in a small saucepan. Bring to a boil, then reduce the heat to a simmer, cover the saucepan, and cook the quinoa for 15 minutes or until all the water has been absorbed.

In a bowl, whisk the coconut milk with the egg yolks, remaining 1 teaspoon vanilla, salt, cornstarch and 3 tablespoons honey until smooth. Pour this over the cooked quinoa, and heat the mixture over medium-high heat, stirring often, until it comes just to a boil and is thickened.

Let cool slightly before serving. Serve warm or at room temperature, but not chilled. Top with a little fresh or cooked sweetened fruit or berries, or just drizzle with additional honey to serve, or do both.

How to Cook Quinoa