This German Chocolate Cake recipe is a classic - a moist, rich chocolate cake base with an irresistibly nutty topping that tastes of creamy, soft caramel studded with deliciously toasted coconut and pecans. Make it as a single layer cake for an everyday treat or turn it into a glorious 3 layer confection for a really special celebration. 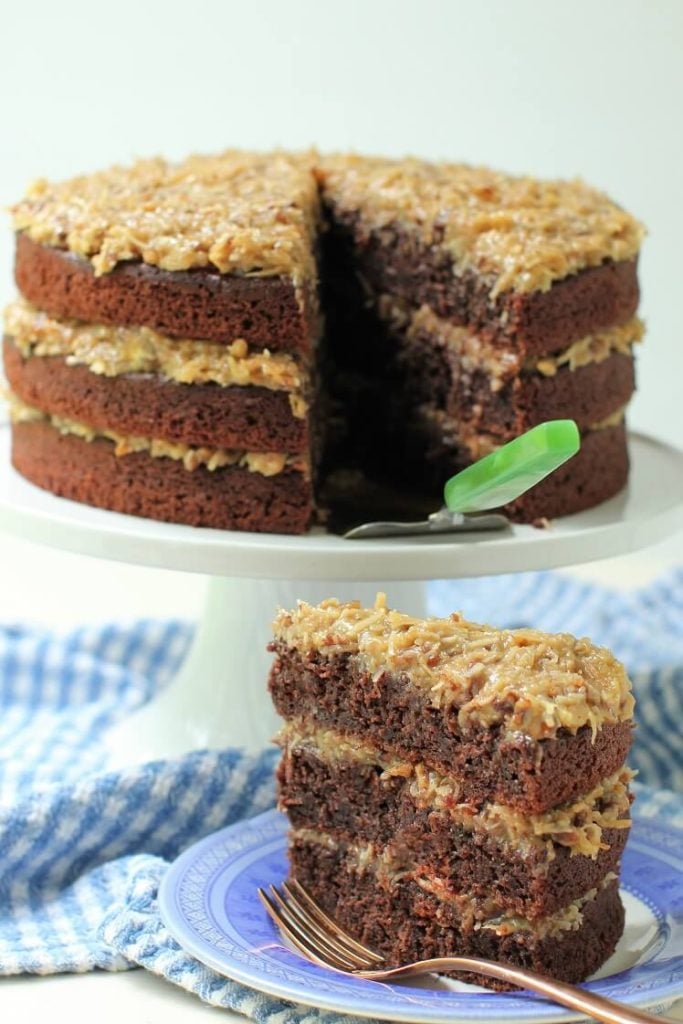 We all need a little cake in our lives. Sticking to salads and stardust, however tasty they may be, still gets stale sometimes. And cake is just the thing.

It's just the thing to celebrate something . . . anything . . . everything!

Celebrate the beginning of summer, celebrate the garden growing, or celebrate the end of the school year! I've had a very busy school year - starting out and spending most of it in a most lovely grade one class, then finishing off the year in grade six - different from my normal routine as a substitute teacher, but immensely rewarding.

The joy that comes from connecting with students, truly connecting, and seeing them blossom, grow, and shine, is a very precious gift. I will treasure all the memories made this year: the intense times, the overwhelming times, the hilarious times, and the many, many outstandingly wonderful times. It was the smiles of the students - the shy, tentative little smiles and the big, beaming goofy smiles - that brought me those memories to cherish.

So maybe it's time for a cake.

I've been working on this German Chocolate Cake recipe for a few weeks, tweaking it till it is juuuuuuuust right. There are a lot of German Chocolate Cake recipes to wade through online, so it took a few attempts to get this cake how we like it (and gluten free, too). It's a moist rich chocolate cake spread with gooey layers of a caramelly custard stuffed with toasted coconut and pecans. This recipe works well with my gluten free flour mix, but will work fine with regular all purpose flour, too.

At first I had the cake too darkly chocolatey, but found that German Chocolate Cake is really better with a softer chocolate flavour that harmonizes with the luscious coconut-pecan filling. I found that a single recipe, baked in a springform pan, is just the right size for eight delightful servings after a dinner party, or for two of us to consume for breakfast, snacks, and fridge-raids in one blissful cake-laden day. (No apologies.) 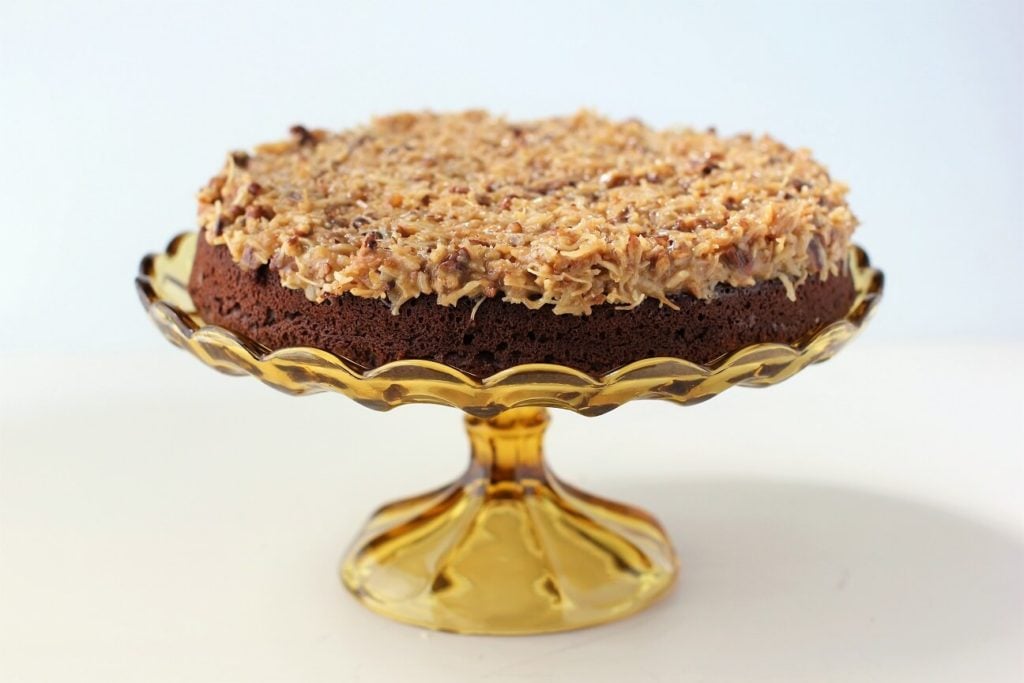 The recipe I've given is for the single-layer cake - perfect for an everyday treat or a celebration for a few. That's the one just right for us. 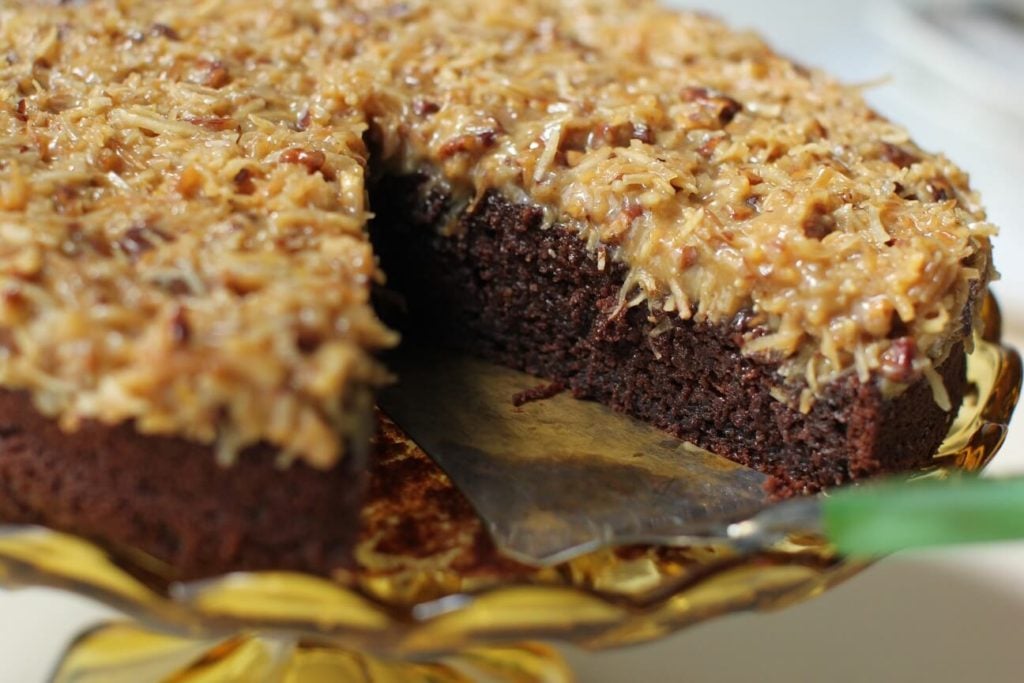 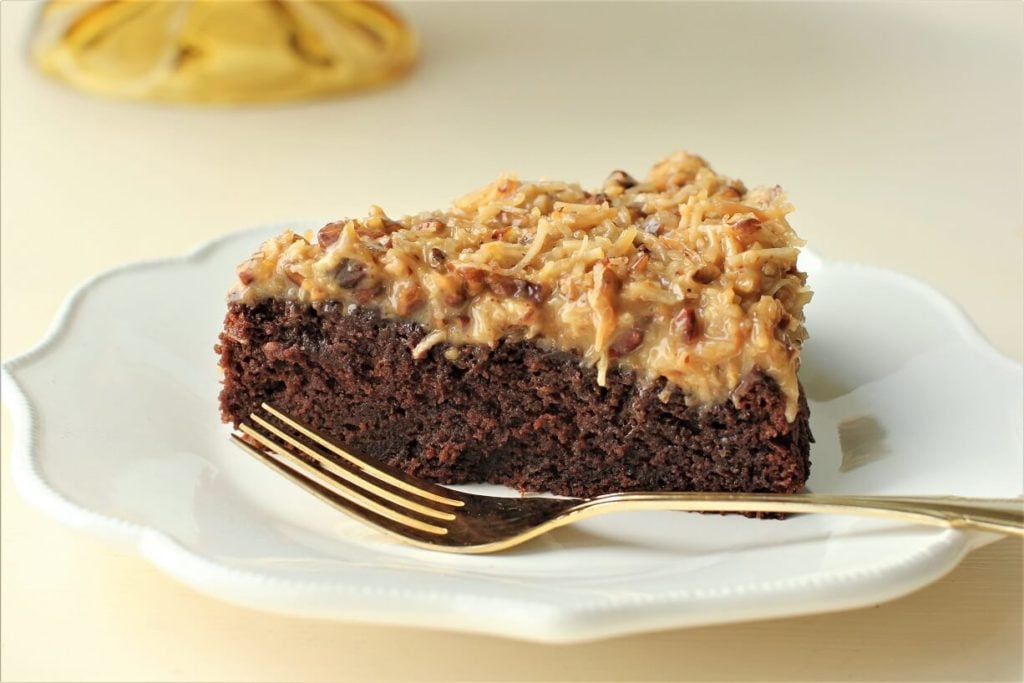 To get the impressive three-layer cake, all you do is double the recipe (instructions below) and bake it in three pans. I made that one to take to a barbecue gathering this weekend, and it served a crowd (and elicited several requests for the recipe). I brought my gluten-free version and it was gobbled happily by gluten-eaters who didn't seem to care that it was 'special'. 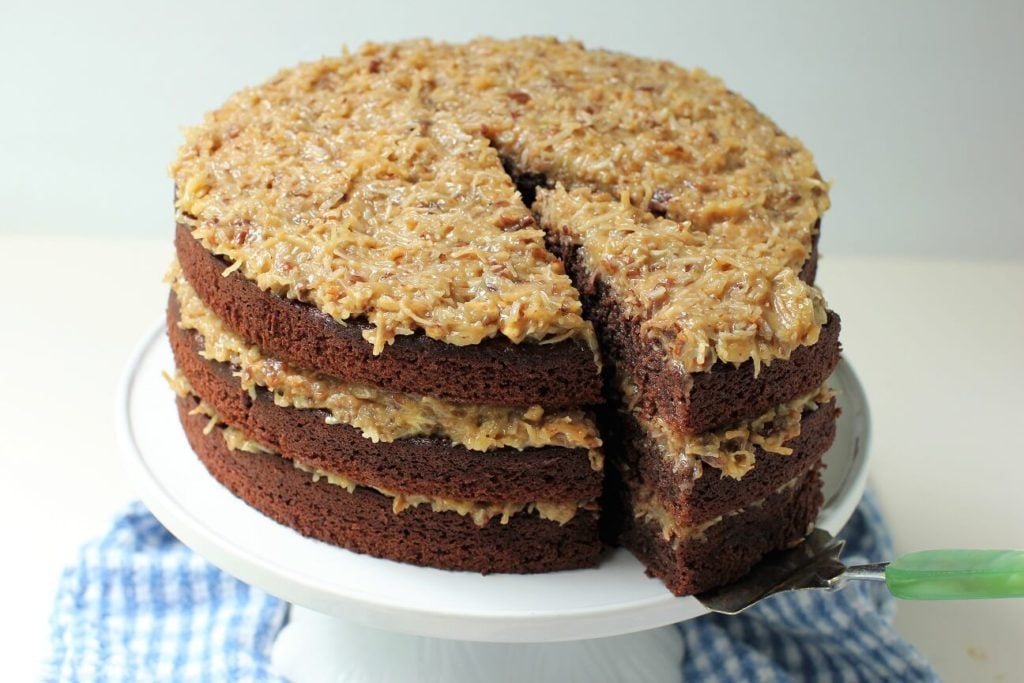 You'd think German Chocolate Cake is a traditional German cake, what with its obvious name and being as the Germans are the creators of so many beautiful cakes and tortes, but you'd be wrong. German Chocolate Cake is a purely North American invention, having been created by a Texas housewife in 1957, using the dark baking chocolate developed by Samuel German (hence the name) in 1852 for the Baker's Chocolate Company.

My husband has been a very happy boy with this cake in the house. You see, he grew up on these kinds of cakes. In his home, desserts and baking were available every day. His mom always had pies, cakes, and/or cinnamon buns sitting on the counter. It was a never-ending delicious dessert buffet, the stuff of sweet dreams. I think I'll have to make this one more often so he gets that big chocolate-cake-smile on his face. 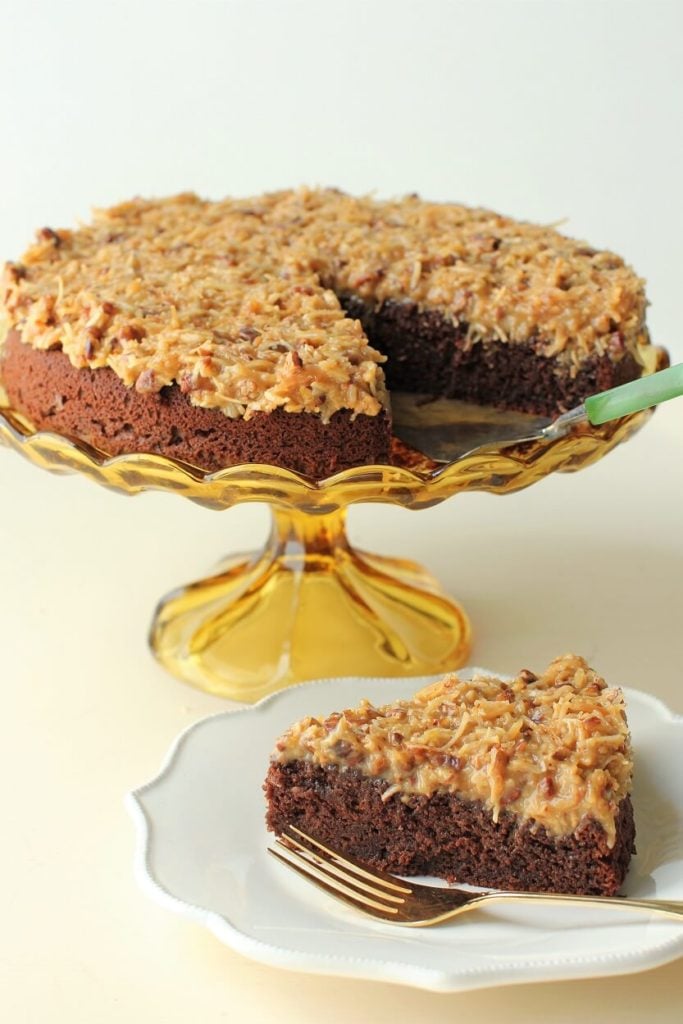 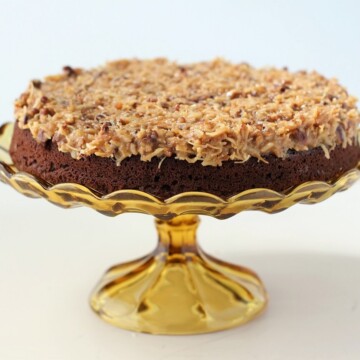 by Margaret Bose Johnson, Kitchen Frau
This German Chocolate Cake recipe is a classic - a moist, rich chocolate cake base with an irresistibly nutty topping that tastes of creamy, soft caramel studded with deliciously toasted coconut and pecans. Make it as a single layer cake for an everyday treat or turn it into a glorious 3 layer confection for a really special celebration.
Print Recipe Save for Later
Prep Time 20 mins
Cook Time 40 mins
Total Time 1 hr
Course Cake, Dessert
Cuisine American
Servings 8

For the Coconut Pecan Topping:

To make a classic 3 layer cake; double the recipe above and bake it in three layer cake pans (I used 9-inch in the photos). Bake them for a shorter time (see recipe adaptation below). Don't skip toasting the nuts and coconut - it really does make a difference in this recipe, where they are the star of the show. How to toast nuts: Spread the nuts in a single layer on a baking sheet. Roast them for 10-15 minutes in a 350°F (180°C) oven. How long it takes will depend on the size of the nuts. They should have darkened slightly in colour and be smelling nutty and toasty. Start checking them at 10 minutes and check every 2 minutes after, so they don't get too dark. To toast coconut: spread the coconut out in a thin layer on a cookie sheet. Toast it for 5 to 8 minutes in a 350°F (180°C) oven. After 5 minutes, check the coconut and stir it, turning the browner flakes at the outside of the pan toward the middle. Check and stir it every minute after that until it has reached the shade of golden toastiness you like. *To make a buttermilk substitute: Stir 1 teaspoon white vinegar into ½ cup (120mls) milk (dairy or non-dairy) and let it sit to curdle for 5 minutes, then use it in the recipe. Canned evaporated milk is traditional in the original recipes. I've used light cream (also called cereal cream or half-and-half), and have also used 2% milk in a pinch (still tasted fantastic). To make the recipe non-dairy - use canned coconut milk.
Keyword cake, chocolate, chocolate cake, German Chocolate Cake, gluten free baking, gluten free cake, gluten free German chocolate cake, layer cake, lazy daisy, lazy daisy cake topping
Tried this recipe?Let us know how it was! 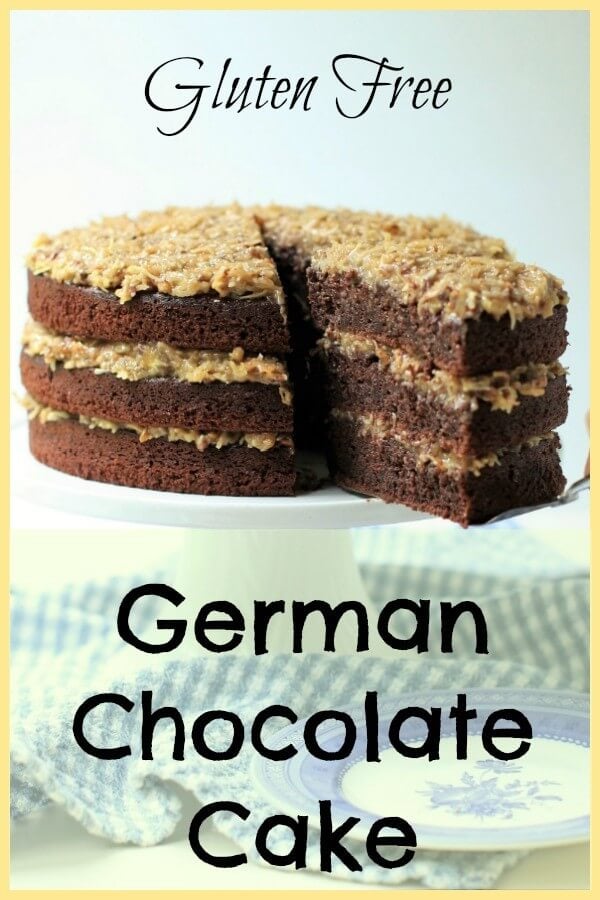