Whip up this easy microwave apple crisp in no time for a comforting dessert with a fresh new twist. 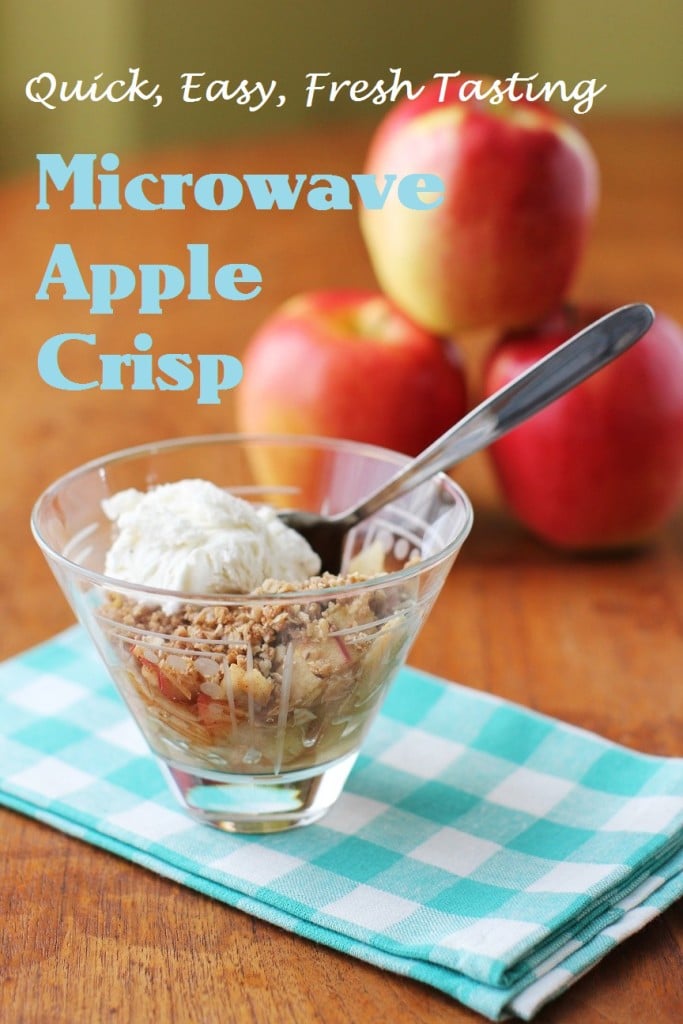 I love it when I find a new cooking technique that makes my life easier . . .

. . . especially when it updates a comfort food classic to be fresh, crisp, and so much quicker to make. In a matter of minutes you can have dessert on the table, or be sitting on the couch cradling a bowl of warm, cinnamon-laced apple crisp with a melting scoop of ice cream while you binge-watch House of Cards episodes on Netflix.

When I was at the coast last week, I spent an afternoon with my cousin Tammy while she helped me with technology stuff for this blog (she's a wizard, and I am so thankful because I am a computer dummy). We'd been sitting in front of the screen most of the afternoon, engrossed in all those technical terms I'm trying to get straight in my head, when we realized it was dinner time.

I watched in awe as Tammy headed for her kitchen (pouring us each a glass of wine first) and then proceeded to put a lovely dinner on the table for five of us - in less than half an hour! Tammy chopped, stirred, and whirled around, making a delectable Cuban fish dish, putting me to work slicing a few apples. I turned my back, took a few sips of wine, and in that time she'd put together dessert, too - a wow-tasting, easy, microwave apple crisp. 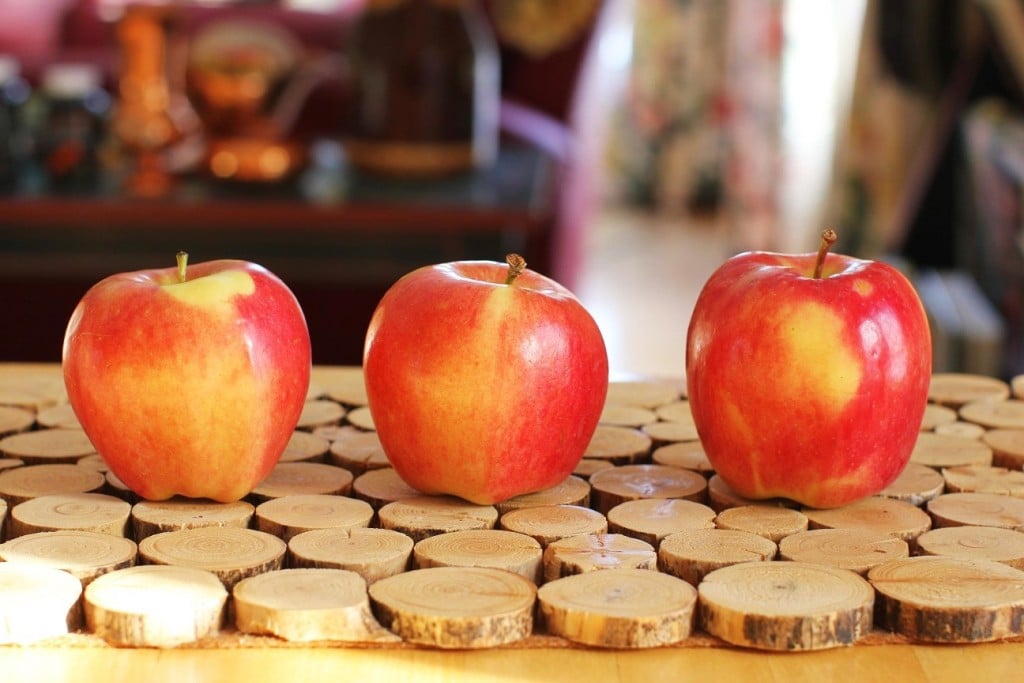 Tammy's recipe is from Epicure, using some of their tasty ingredients. When I got home I had to try to recreate her dessert using ingredients I had in my kitchen. I've already got a recipe for a traditional apple crisp on this site, which is a comfort food classic - soft, melting apples topped with crunchy, spicy, sweet crumbles. So why would I need another one?

Well, this apple crisp is a whole new species (there's definitely room in my life for both). Crisp apples are sliced really thin, then barely sweetened and barely cooked, retaining much of their freshness and crunch. They cuddle up with a blanket of cinnamon and rum. The crumbly topping is soft, buttery, and nubbly - gently spiced and just right. A scoop of vanilla ice cream melts into lusciousness between the spaces.

And it all comes together before you can say, 'Where's dessert?'

The only requirement for making quick and easy microwave apple crisp is a microwave (of course) and a mandoline. The mandoline slicer enables you to get the apples whisper thin with lots of surface area to coat with flavour. I have two mandolines - one adjustable one, and one handy thin-slice one I use all the time (it's great for slicing veggies for salads). It's one of those kitchen tools that is an extra, but one I think is well worth the cupboard space.

Try this new apple crisp kid on the block - you might find you've made a new friend. 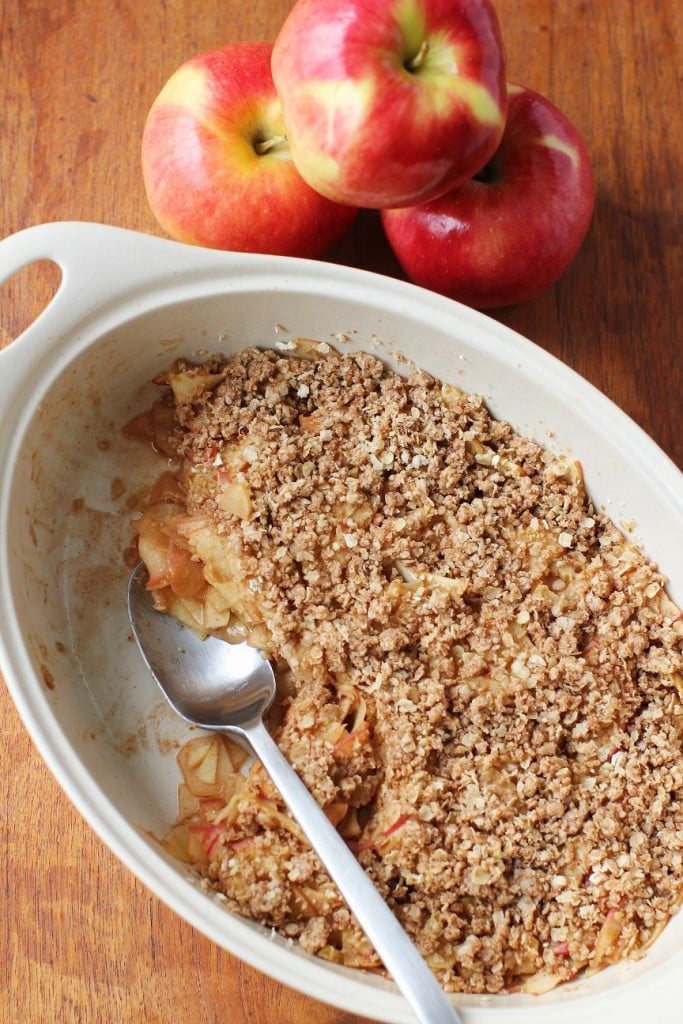 Just slice quarter, core, and slice up those apples (no need to peel) with a mandolin (a handy kitchen tool). Then chop through the pile of slices a couple times to make them smaller, like apple flakes. 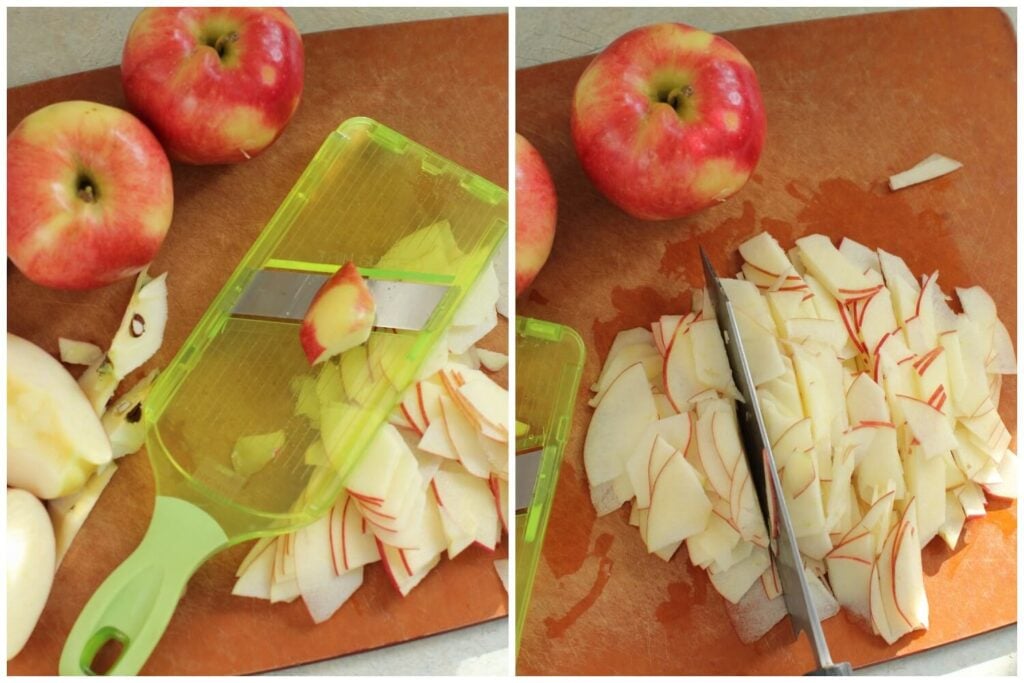 Pile the slices into a baking dish, toss with a couple other ingredients, and microwave them for a few minutes. 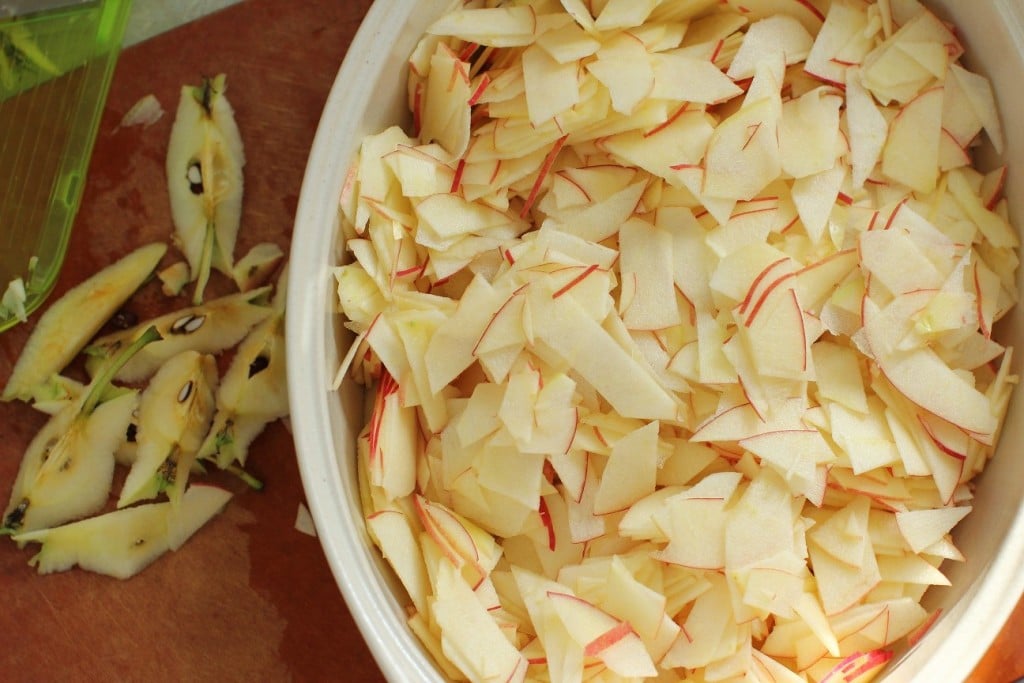 While they're cooking, quickly rub together a light, crumbly, oaty topping. A touch of spices adds delicious flavour. 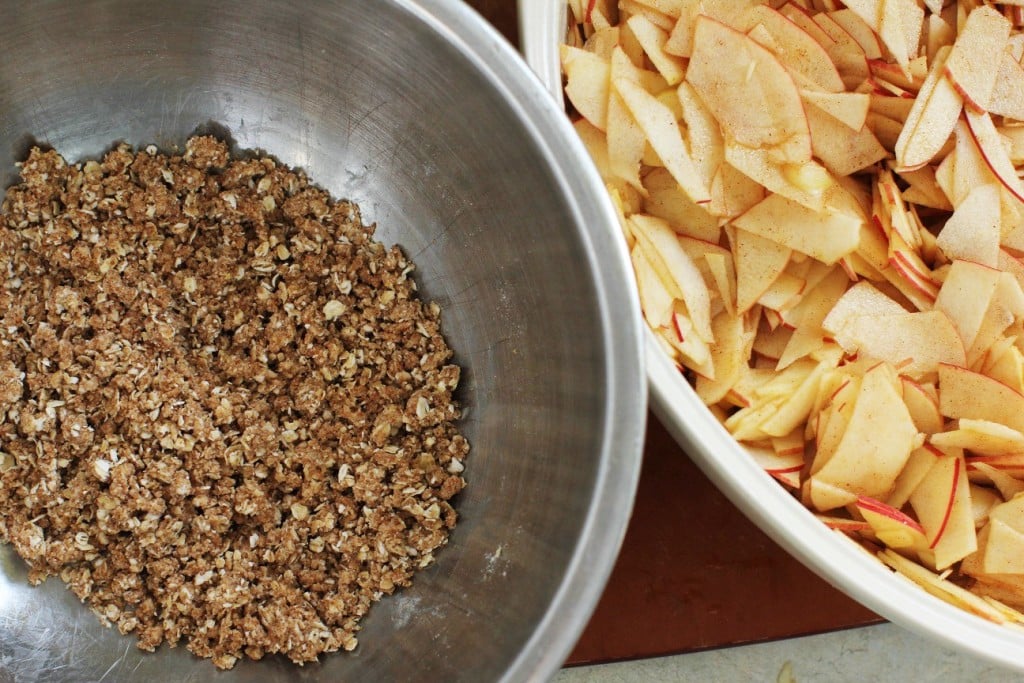 Spread the crumble on top of the partially cooked apples, microwave for another few minutes, and it's ready to dig in! 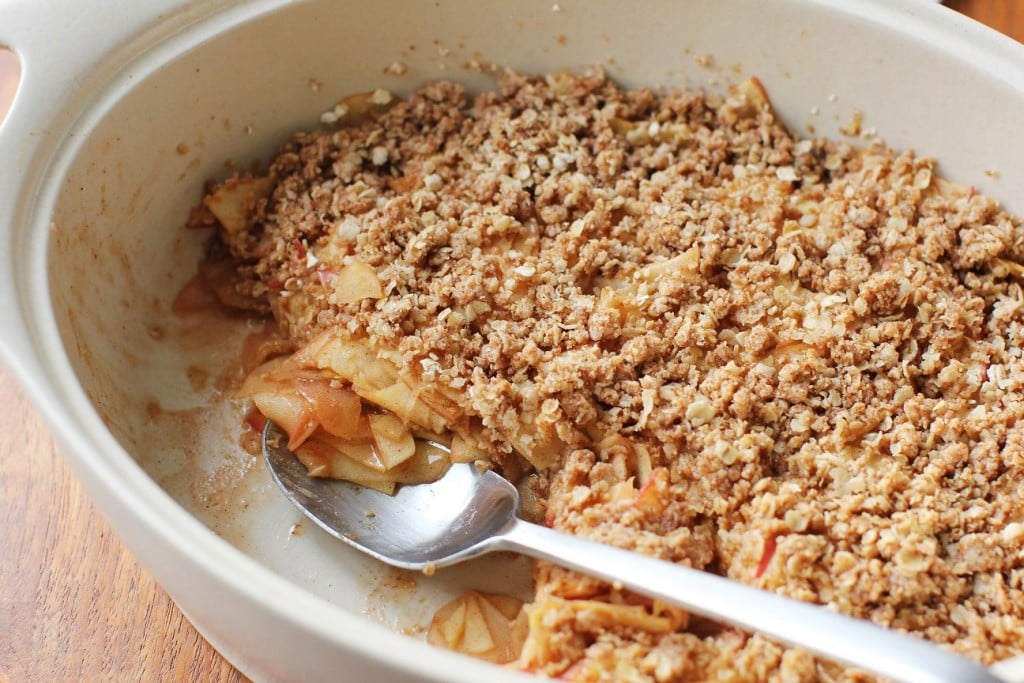 So tasty! (And you'll feel like a kitchen wizard for having produced this fantastic dessert in just minutes.) 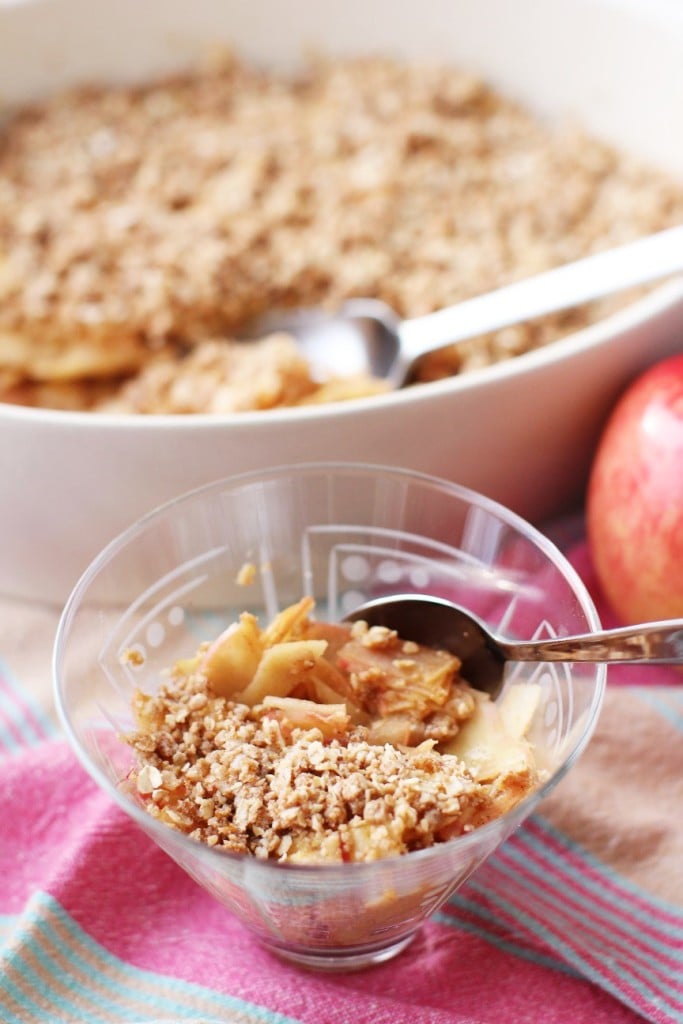 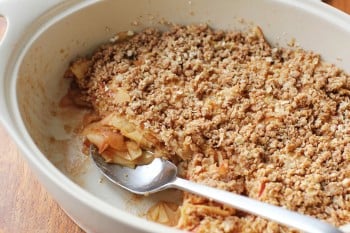 For the crumble topping: