Who doesn’t love quesadillas? How about these Refried Lentil Quesadillas? They taste fantastic and are super high in fiber and nutrients, to boot! (Skip to recipe.) 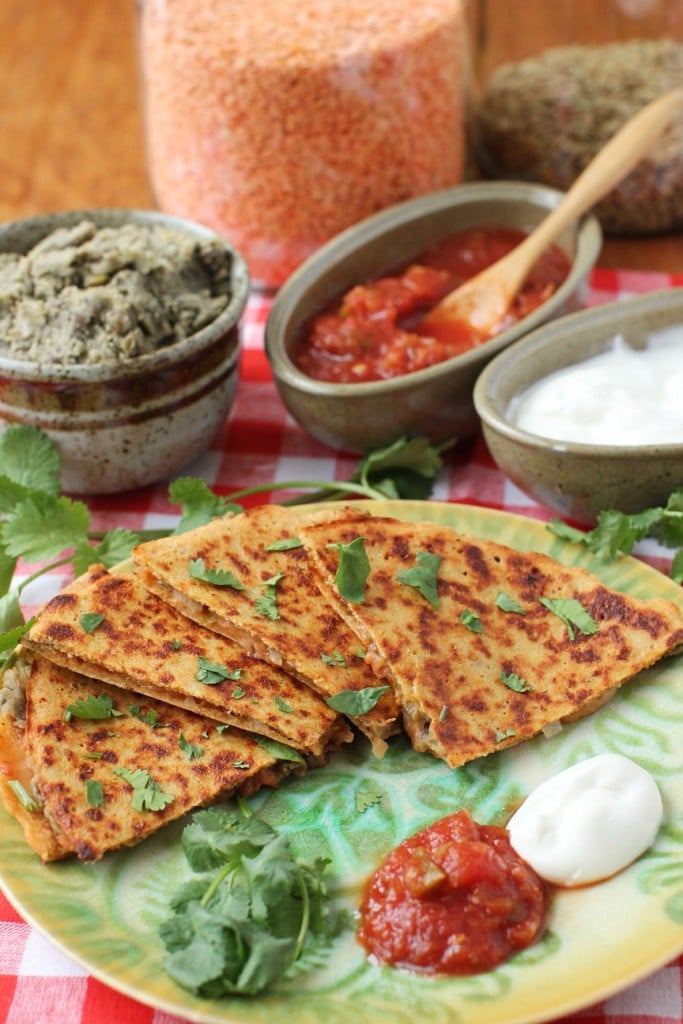 Well, I took a big gulp, crossed both fingers and took the leap – I made a video!

I think I’m like many people in that I hate to see myself in pictures, and videos of myself are even more painful to watch . . . Does my voice really sound like that? My cheeks look so chubby! And why am I waving my hands around like an idiot?

But the reason for making this one was worth all the squirming and cringing . . . let me start at the beginning.

For the last couple years I’ve been submitting recipes to the Canadian Lentils recipe contests. I haven’t won, but last year three of my recipes were chosen as finalists and included in a lentil eBook on the Canadian Lentils site (Broccoli Lentil Salad, Lentil Polenta with Mushroom Ragu, and Chocolate Truffle Cake Pops).

Last month I received a package in the mail including a red apron and an invitation to participate in their Star of the Show contest. 5 lucky winners will be flown to Prince Edward Island to make a video and get tips and tricks from . . . Chef Michael Smith!!!!!    As I read the invitation, my heart stopping beating for a few seconds, and then started thumping loudly as I thought about it.

In my little food-centered world, Chef Michael is a rock star and I am a screaming groupie (only in my head, of course). I own all his cookbooks and watch his cooking show. His recipes always work and they taste fresh and fantastic. It would be an absolute high point for me if I could actually meat him and learn from him!

But . . . it meant I’d have to make a video. Yikes! Much as that struck terror in my heart, I knew right away I’d do it – the prize was worth the feeling of vulnerability and embarrassment from putting myself out there. (I am an introvert inside.)

So if you’d take few minutes to watch my video, and then click the little thumbs up ‘like’ icon underneath and leave a comment or share it, I would appreciate it SO much. It would help my chances to win – and that would be the thrill of a lifetime for me!

Here it is (she says with a huge cringe):

(In the video, I pause occasionally before speaking because my brain keeps wanting to say  ‘Lefried Rentil Quesadillas’ and I’m doing my darndest to say it properly and not bust out laughing!)

We really do love lentils in this household. I grew up eating them often – my mom put them into soups and stews all the time. I cook with them a lot, so coming up with a yummy original recipe starring these lovely little pulses was just a fun project for me. (The video was another story.)

My kids loved quesadillas when they were growing  up (they still do). Quesadillas were the most popular answer to the What do you want for lunch? request, and I was often churning out huge batches of them when they had friends over – they’d eat them as fast as I could make them. So quesadillas were a no-brainer for me to ‘lentilify‘. 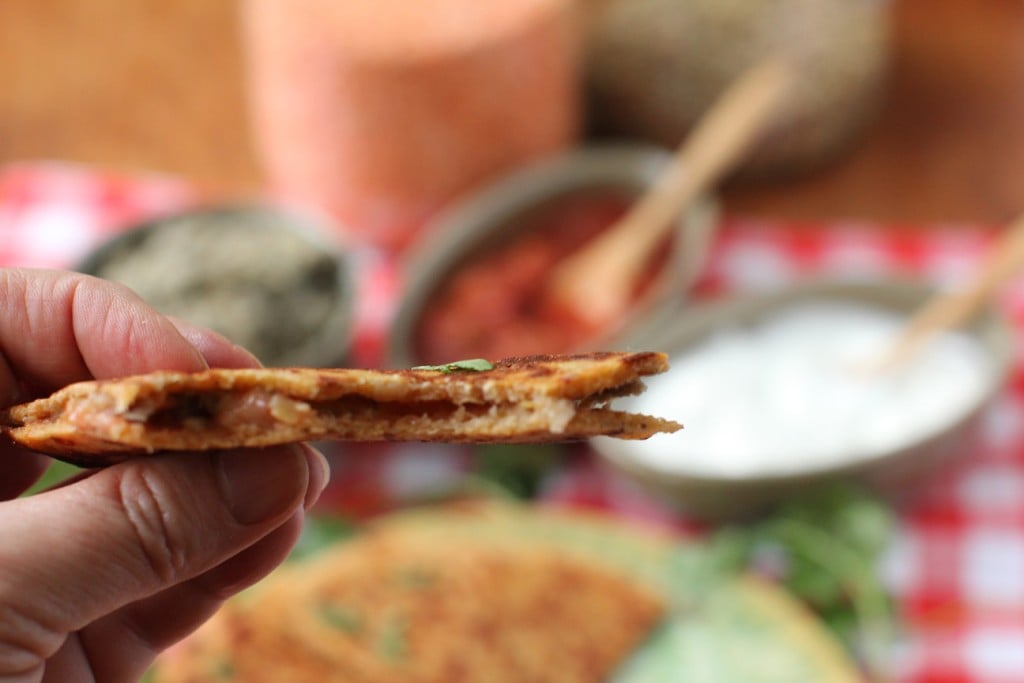 Kitchen Frau Notes: The advantage of this recipe is that you can make the tortillas and the refried beans ahead of time (up to five or six days ahead) and prepare the quesadillas very quickly at serving time.

The recipe looks lengthy, but don’t let that put you off. Refried Lentil Quesadillas are really simple to make, and once you’ve made them the first time, I bet you’ll be whipping them up often.

To make savoury lentil crepes for wrapping all sorts of delicious savoury fillings, use the tortilla batter as below, except increase the oil to 3 tablespoons to make the crepes more pliable.

Use leftover refried beans to heat up as a side dish (you may need to add a splash of water to reheat them), stir them into soups, or mix them with salsa to a thinner consistency and use as a dip for tortilla chips. 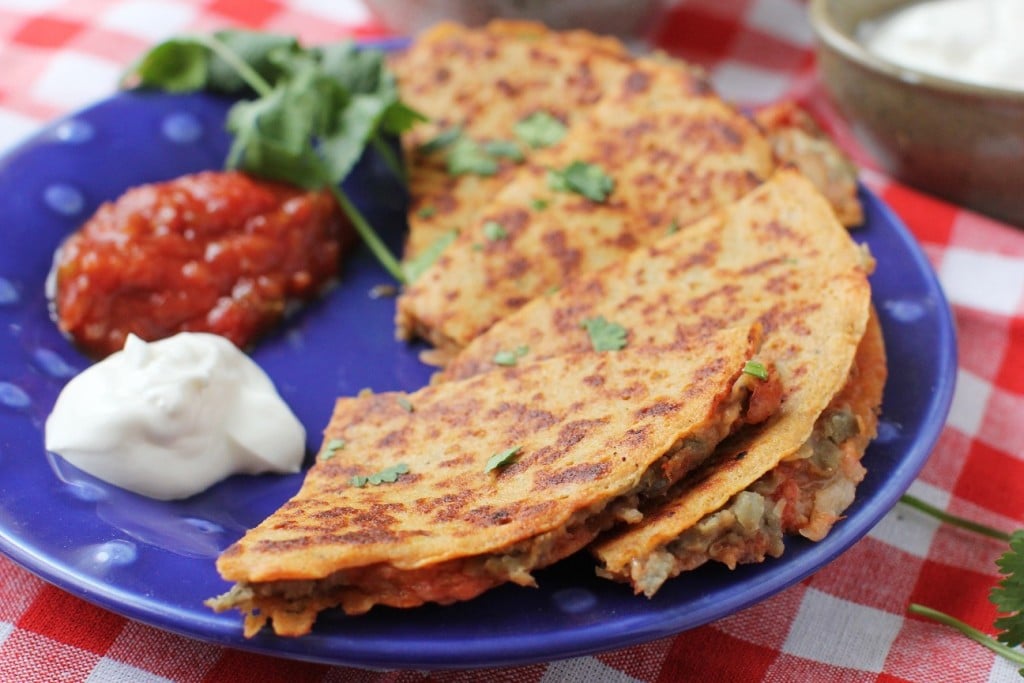 For the Lentil Crepe Tortillas:

For the Refried Lentils:

To assemble the Quesadillas:

To make the Lentil Crepe Tortillas: In a blender container, combine the lentils, milk, onion, oil, paprika, and salt. Whiz until the lentils are finely ground. Add the eggs and black peppe,r and whiz for 2 or 3 seconds until they are blended in but you can still see the pepper flecks. Let the batter rest for 30 minutes to allow the ground lentils to absorb some liquid and the batter to thicken slightly.

Heat a crepe pan or skillet with an 8-inch (20cm) bottom over medium heat. Add ½ teaspoon of butter or oil and let it heat up. Add ⅓ cup (80ml) of the tortilla batter, and quickly lift and swirl the pan so the batter spreads to the edges. If you need to, use a silicone spatula to gently spread the batter to any edges that weren’t filled. Cook the tortilla until it is golden brown underneath (1½ to 2½ minutes). Flip and cook the other side until golden brown spots appear (30 to 45 seconds).

The tortillas can be used immediately, or stacked on a plate, left to cool and wrapped tightly in plastic wrap. They keep for up to 5 days in the refrigerator.

The recipe makes nine 8-inch crepes – the first one is usually a dud!

To make the Refried Lentils: Place both types of lentils in a medium saucepan with the water. Cut the onion in half and push it, cut-side-down, into the saucepan (reserve the other half of the onion for later). Add one of the garlic cloves and the bay leaf. Bring the lentils to a boil, then reduce the heat to low. Cover the saucepan and simmer the lentils for 40 to 45 minutes, stirring once in between, until the red lentils are completely broken down and the big green lentils are very soft when you squish one between your fingers. Most of the water should have been absorbed into the lentils. Remove and discard the onion, garlic, and bay leaf.

In a skillet over medium heat, melt the bacon fat, lard, or oil. Finely chop the remaining onion half, and mince the remaining 2 cloves of garlic. Cook them in the fat for 2 to 3 minutes, until translucent. Add the cumin, salt, and pepper and cook for 1 minute more. Dump in the cooked lentils, and cook and stir them until they are heated through. The refried lentils should be the consistency of loose porridge. If the mixture is too thick, add a few tablespoons water, if it is too runny, cook it for a few minutes longer.

Set the lentils aside and let them cool to lukewarm. They will stiffen up as they cool. Use them for the quesadillas once lukewarm as it’s easier to spread the salsa on top if the lentils are a bit more solid, or store in a sealed container in the refrigerator for up to 5 days.

To assemble the Refried Lentil Quesadillas: Heat a dry, heavy-bottomed skillet over medium-low heat. Lay one of the tortillas into it, lighter-coloured side down. Spread it with a generous ¼ cup of the Refried Lentils, leaving about a ½-inch border without lentils. (The filling will spread to the edges while cooking.) Top with about 3 tablespoons of salsa and spread it over the lentils with the back of a spoon. Sprinkle with about ¼ cup of the shredded cheese. Top with another tortilla, lighter-coloured-side up. 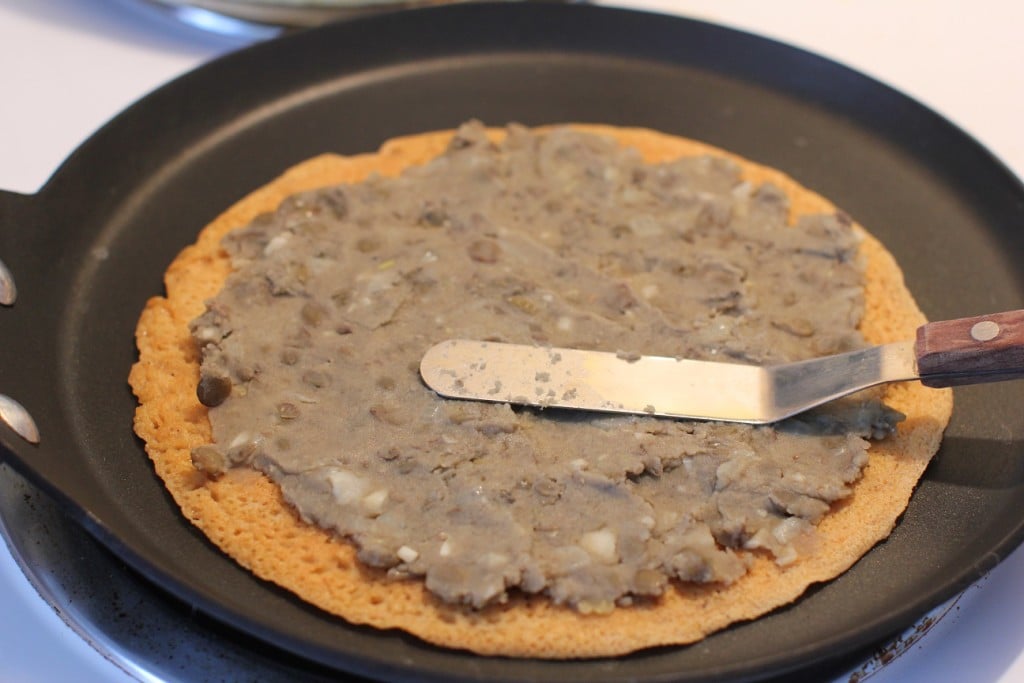 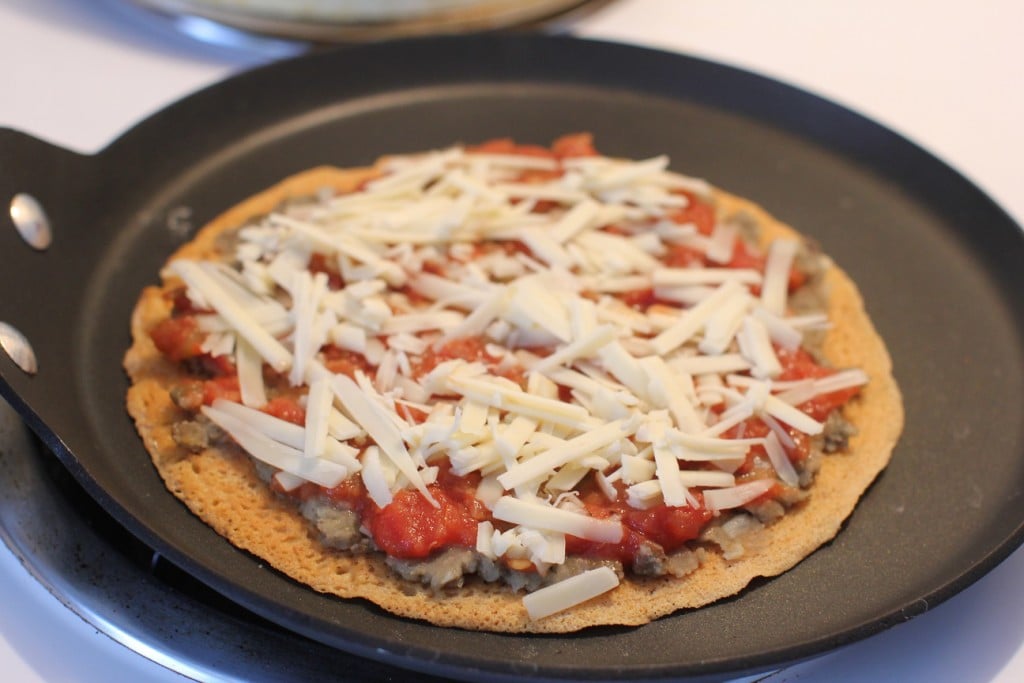 Cook for a few minutes until the bottom is crisp and browned when you lift up an edge to peek. Slide a wide pancake flipper underneath the quesadilla and put your other hand on top. Flip the whole quesadilla quickly and carefully so the filling stays inside and the whole thing stays together. Cook the other side until it is brown and nicely crisped. 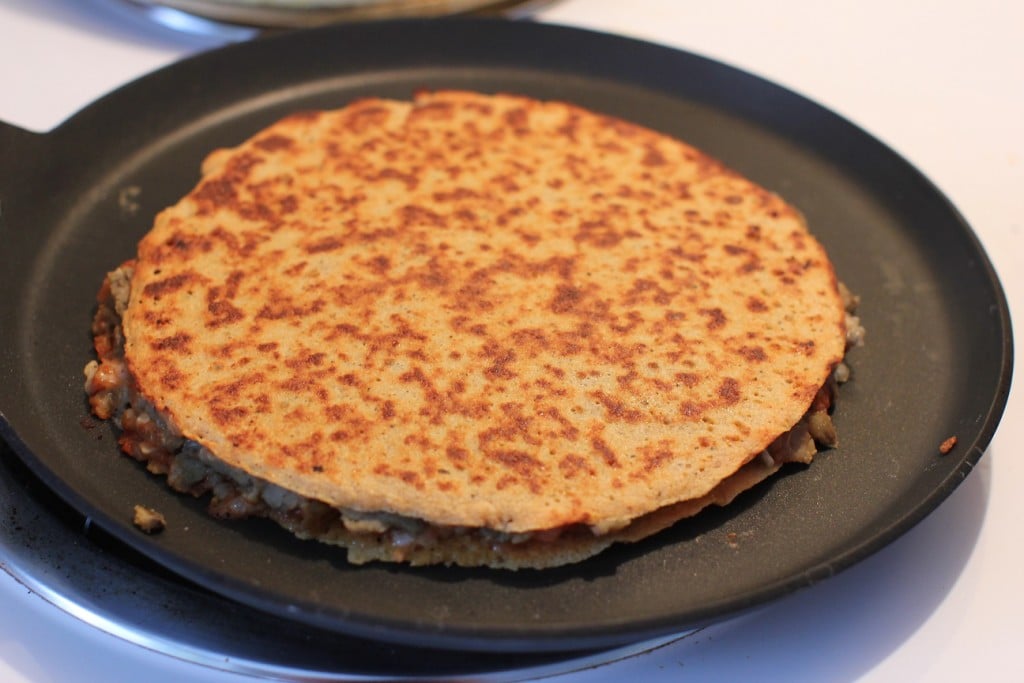 Slide the quesadilla onto a large cutting board. Let it rest for 30 seconds to 1 minute, then cut it into quarters with a large, sharp knife, cutting down into it rather than sawing through it.

Repeat with the remaining tortillas, or have 2 skillets going at once to do two at a time. The quesadillas are best when served immediately, but you can keep the first quesadillas warm in a low-heat-oven while finishing the rest.

Sprinkle with chopped fresh cilantro if you like, and serve with dollops of sour cream and additional salsa for dipping.

Lentil Rice Bowl with ‘Knock Your Socks Off’ Tahini-Miso Dressing