Mulligatawny is an amazingly flavour-loaded soup, rich with vegetables and chunks of chicken floating in a luxurious, slightly spicy, creamy curry broth. One bowl is never enough. Make up a big pot of it and watch it disappear. You'll have to hide some away if you want to freeze it for later. (Skip to the recipe.) 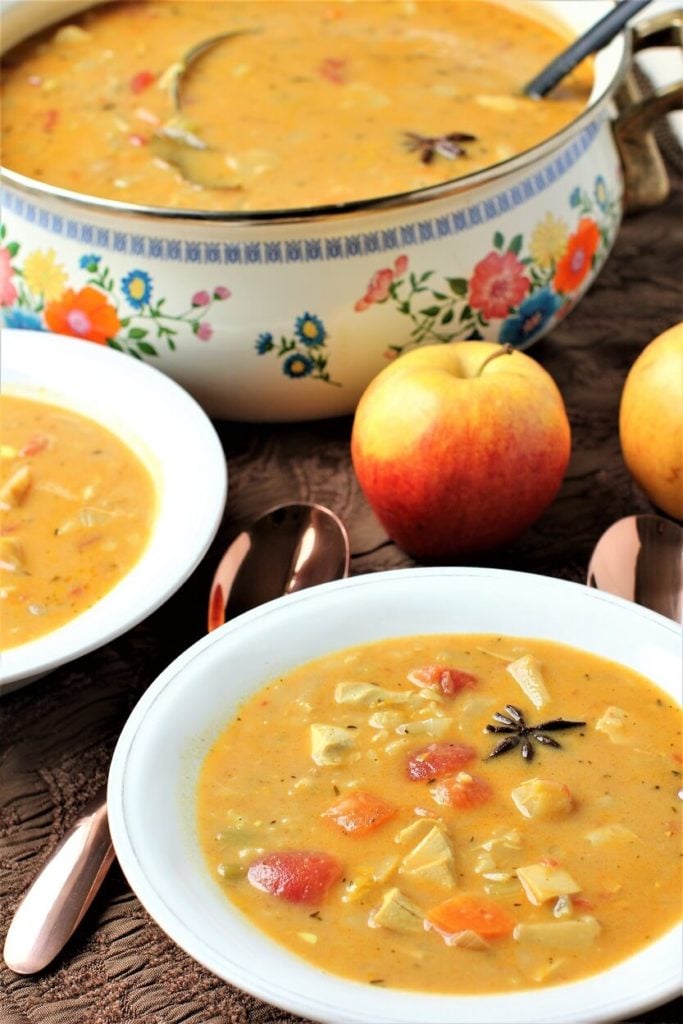 RIDDLE: What can be a thick stew-like gumbo, a creamy smooth purée, or a light brothy concoction? What can be served hot or cold, spicy or mild, chunky or silky, sweet or sour? It can be a light appetizer, a wonderful dessert, or a rib-sticking meal. It can contain vegetables, meats, seafoods, fruits, herbs, spices, legumes, or a combination. It can be served in a bowl or sipped from a cup. You can load it with all kinds of toppings. It can be the most homey comfort food or the most exciting culinary adventure. Every culture has it.

What other food can do all that? 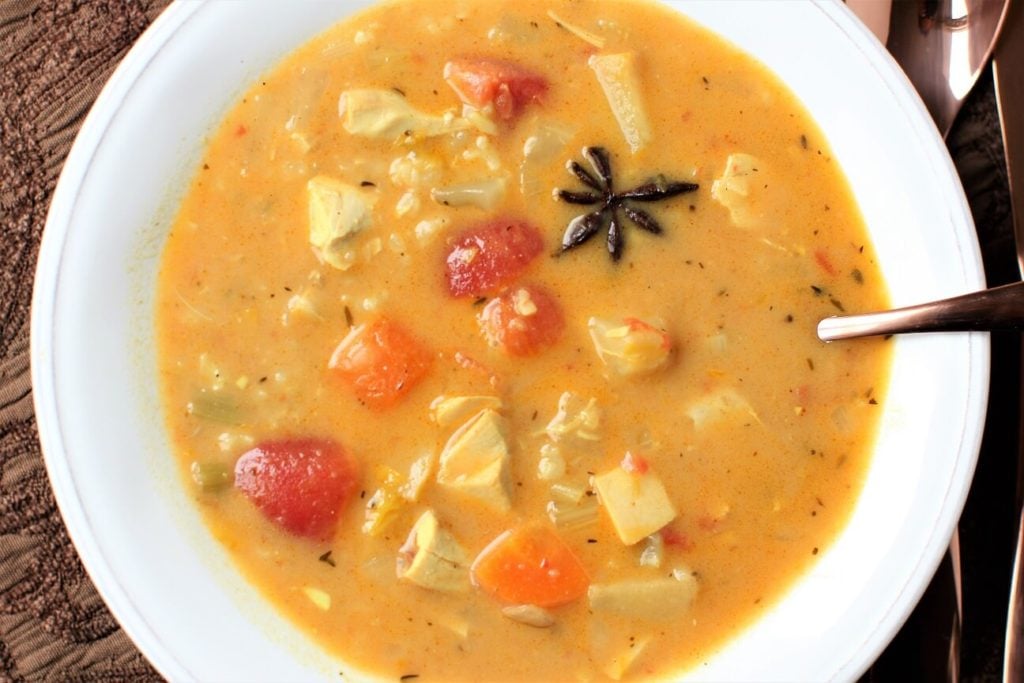 Soup is like a whole category of food by itself. I mean, look at how many different kinds of soups there are, from all around the world!

The fun thing about cooking soups is you can keep tweaking and adding to them as you go. You can invent a new soup every day. You can throw in yesterday's leftovers or the contents of your crisper drawer. You can buy specialty ingredients just for a unique soup recipe that's tried and true. You can explore cultures from around the world with a new recipe every day for years and never repeat the same soup twice.

For years as our kids were growing up we had a big Christmas party every December, with about 30 people playing this crazy card game like the 'Spoons' game played by kids (it was full contact cards, with adults and kids alike often rolling on the floor wrestling spoons from each other. A pack of band-aids was on standby for casualties!) I'd cook up three huge vats of soup, a different one in each pot, and after the games we'd feast until we were full. I made sure to make three new varieties of soup each year, so we never had a repeat. Soups are a great way to feed crowds, and they can be made ahead and repeated - in fact, many soups are better the second day!

Last year Raymond asked me to make a soup for his staff potluck party, so I made a big pot of my mulligatawny soup and sent it along. It received rave reviews and many requests for the recipe. Apparently his colleagues were fighting over the leftovers. The problem is, I'd never used an actual recipe, just tossed in things until it tasted good. Each time I made it, the soup was a little different. 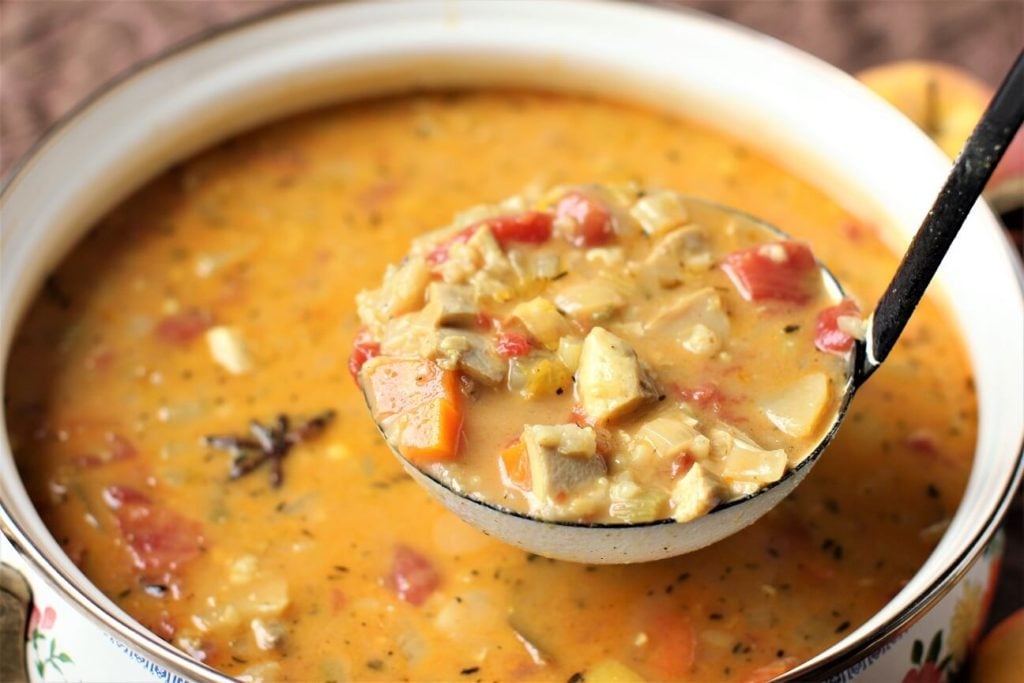 What in the World is Mulligatawny?

Mulligatawny is based on a soup from the south of India and Sri Lanka. The name comes from the the Tamil words miḷagāy (மிளகாய் 'chilli') or miḷagu (மிளகு 'pepper'), and taṇṇi (தண்ணி, 'water'). When British colonists returned to England after being stationed in India, they missed the warm spices and rich flavours they'd grown accustomed to in that hot sunny land. The British food of the time was bland in comparison to the sensual culinary experience that was Indian food. So they developed foods that fulfilled their nostalgic longing for India. Mulligatawny is the British version of what colonists thought an Indian soup should taste like; vaguely reminiscent of a curry, but milder and suited to the European palate. Its light and rich flavour is absolutely addictive.

I've made a version of mulligatawny for years, and it's slowly morphed to become the recipe I make today. When the kids were little, I'd make a big pot of chicken rice soup, adding garlic, bay leaves, star anise, a can of diced tomatoes, and a good shot of curry powder, and call it mulligatawny (whether it was or not). It was a standard family favourite. Over the years, I've added fresh ginger, then I added diced apples, then a few more spices, and a can of coconut milk, until it's become this flavour-loaded, addictively rich and spicy soup that our family absolutely loves. 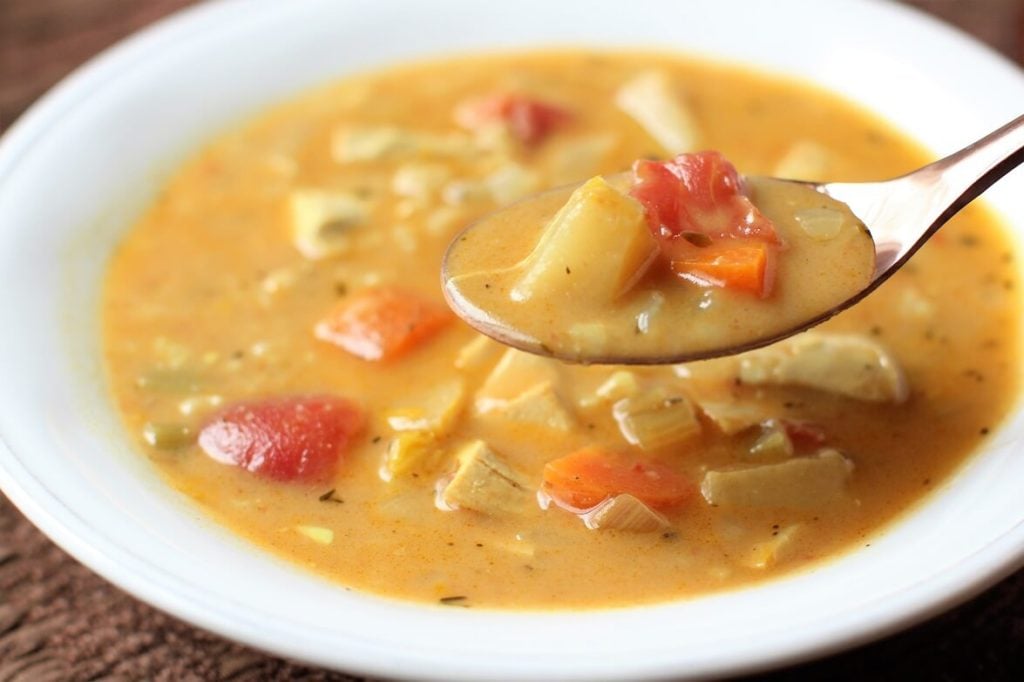 This year my mulligatawny was requested again by Raymond's colleagues for the staff party. I made what I thought I'd made before, but the soup was a bit too gingery and spicy, so I decided it was time to buckle down and figure out specific amounts for this soup. After a bit of trial and measuring, I've finally arrived at the version of mulligatawny that is exactly how we like it. I hope you will, too. I'd love to hear what you think of it if you make it!

This Mulligatawny Soup is:

Kitchen Frau Notes: This soup makes a large potful, but it freezes well.

Star anise can be found in spice stores, import stores, or the Asian section of large supermarkets. The whole pods keep for several years, and you can also use them for making my famous chicken stock or killer gravy.

Cooked rotisserie chicken will work for this recipe, or bake or boil a few chicken breasts and thighs to use in the soup. 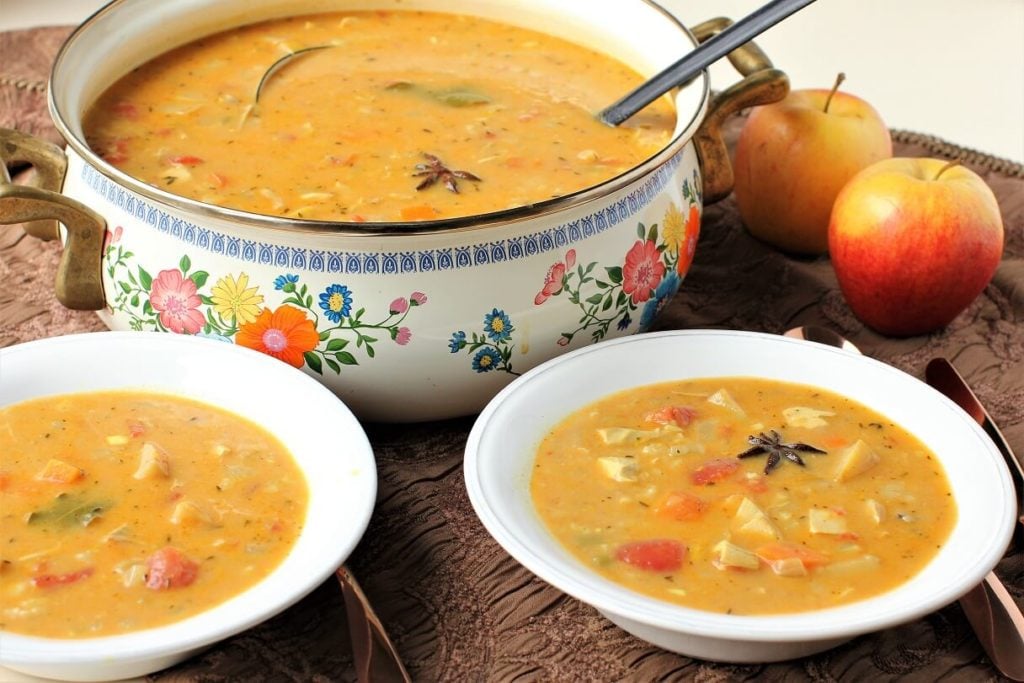 Heat the ghee or olive oil in a large stockpot over medium heat. Add the onion, celery, carrots, and ginger, and cook, stirring occasionally, for 5 minutes.

Cut the apples into quarters and cut out the cores (leave the peels on). Cut each quarter into 4 wedges, then cut the wedges crosswise into 4 pieces each. Add the apples to the vegetables.

Add the bay leaves, star anise, rice, tomatoes, and chicken broth. Bring the soup to a boil, then reduce the heat, cover, and simmer for 15 minutes, stirring once or twice during that time.

Add the diced chicken and cook for 5 more minutes.

Stir in the coconut milk. Taste the soup and add more salt if it needs it. The salt needed will depend on how salty your chicken broth was to start with - start by adding ½ teaspoon and keep adding more until it suits your taste.

Remove the bay leaves and star anise pods (or leave them in and let diners fish them out themselves) - they're not edible.

The mulligatawny soup tastes even better the next day, and also freezes well. 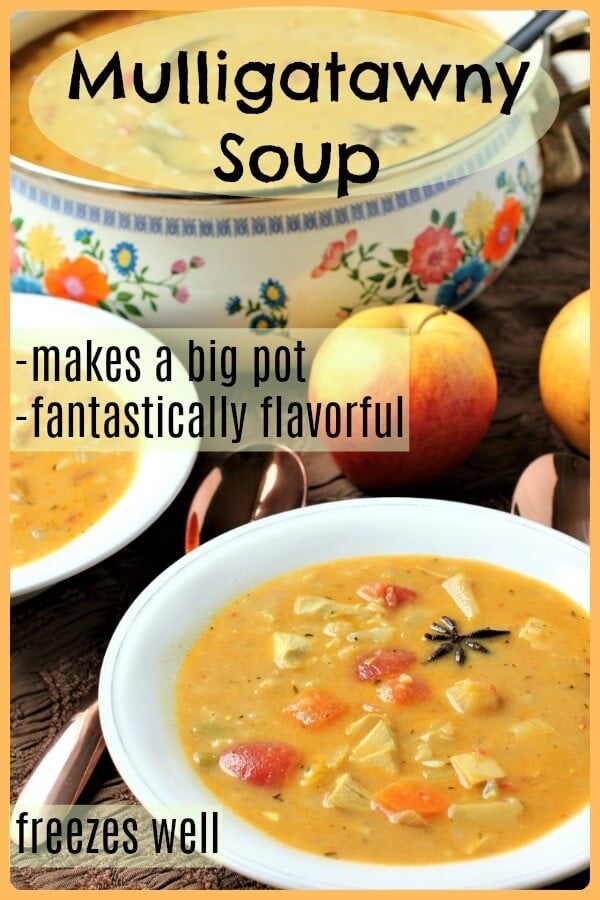 How to Make Authentic Pad Thai