Homemade apple cider syrup is a simple process - kind of like boiling down maple sap to make syrup. The finished result is an intensely flavourful, naturally sweetened syrup that is delicious on pancakes, french toast, ice cream, roasted root vegetables . . . wherever you love using a drizzle of syrup. (Skip to recipe.) 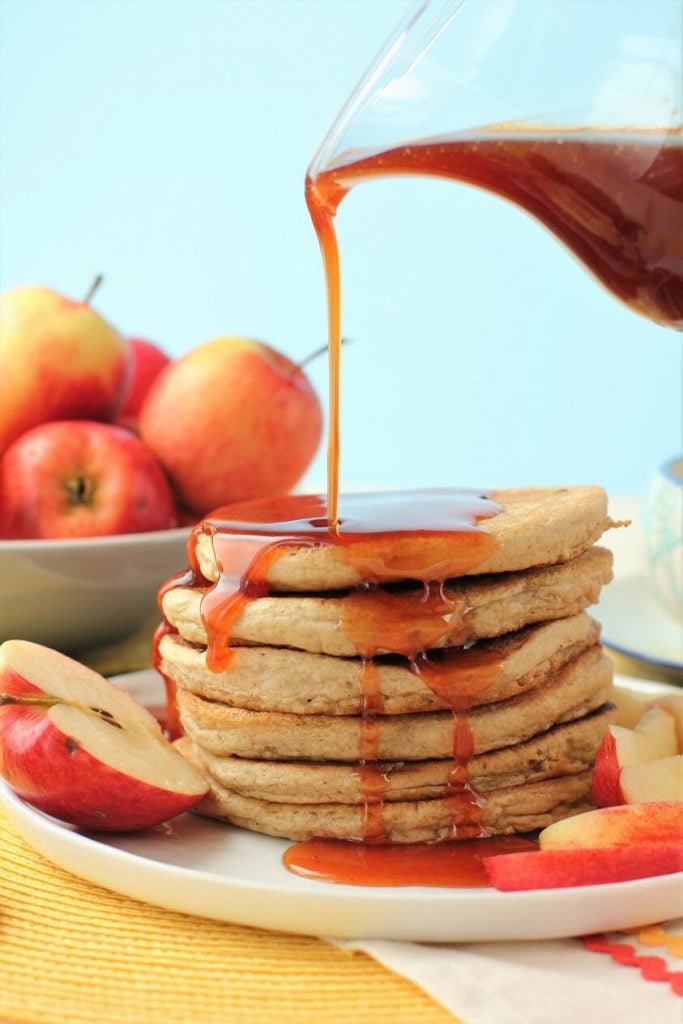 Want your home to smell amazing?

Like the fall harvest, and warming spices, and  baskets of crisp apples in a sun-dappled orchard?

Then grab yourself a big jug of freshly pressed sweet apple cider and a few cinnamon sticks and let it gently bubble away on your stove for a while.

The weekend before last we had our third annual apple pressing party. This time it was a small, very impromptu get-together. The weather has been so miserable here all fall that it's hard to find a good weekend. We realized that the weather would be good that Sunday, so we did a bit of last-minute calling and a few friends came over to help out. We had a great time; laughing, working, munching apples, and telling stories!

It couldn't have been a better day - the sun shone and the air was crisp, but warm. The leaves were glowing on the trees, and the apples were ripe for the picking.

We had several wheelbarrows, a couple huge washtubs, and countless pails of apples to press.

Everyone took on a job, and we were all done in under two hours. What a fantastic crew! 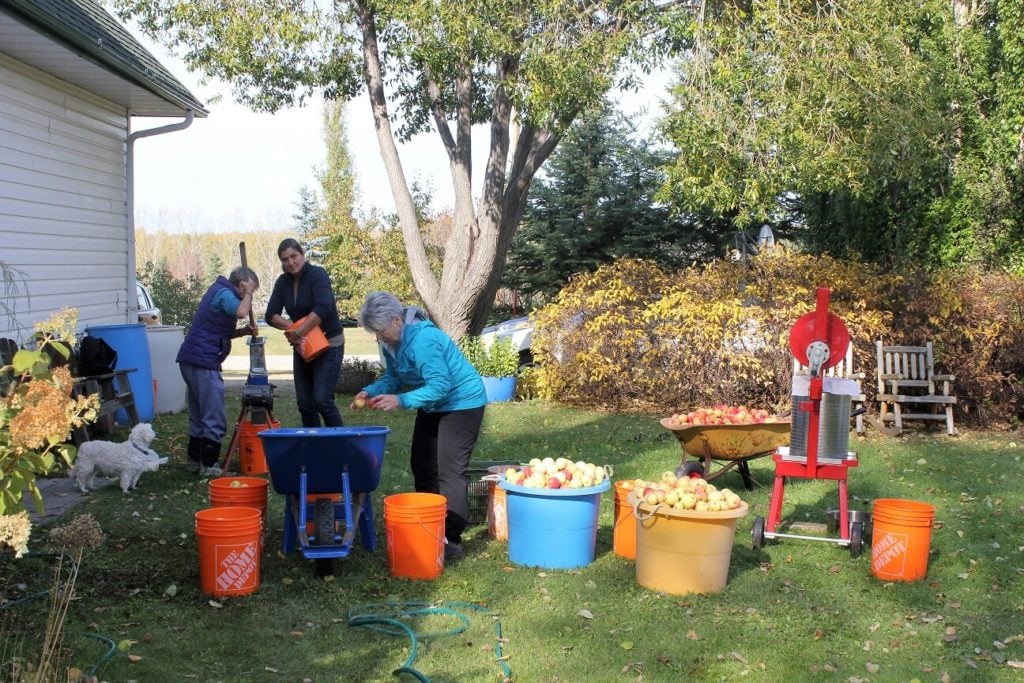 Lots of apples to deal with. The harvest was good this year off our five different trees.

First the apples need a wash - we do it in a clean wheelbarrow.

After they're washed and checked for bad spots, they get dumped into the grinder. My dad built this grinder years ago and it still works like a charm. The apples come out the bottom all chopped and ready to be pressed. 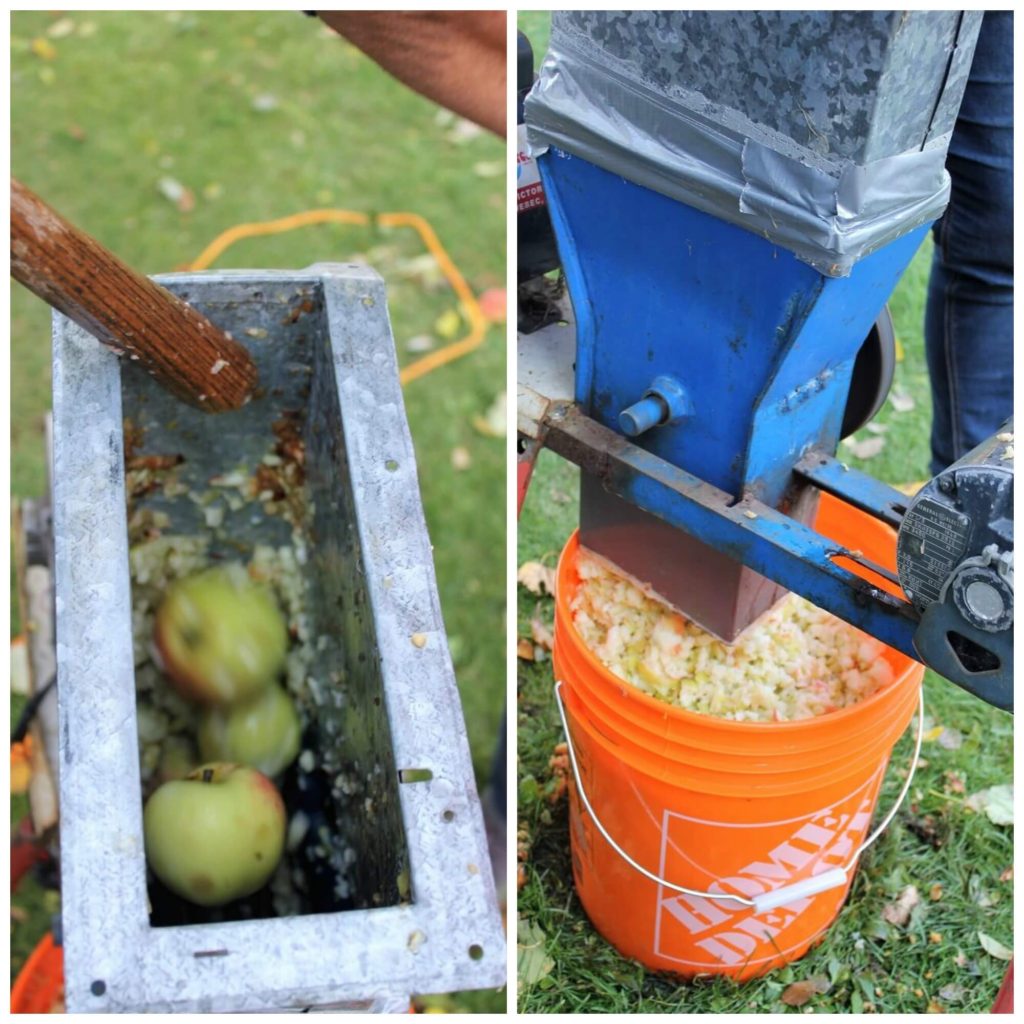 Sometimes the job makes you hungry. 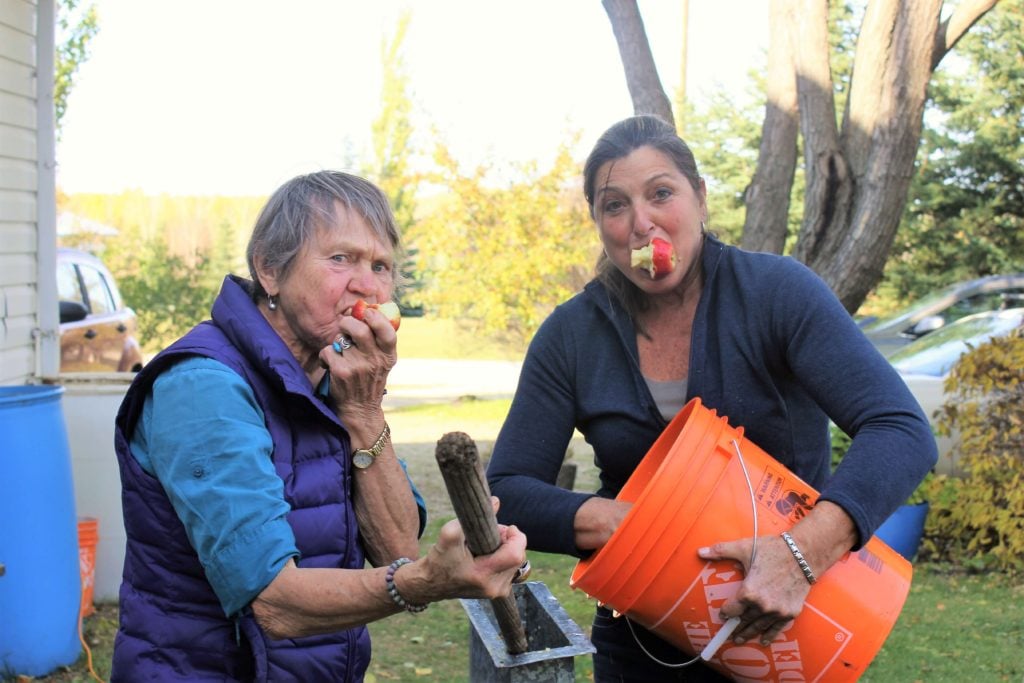 You grab the bucket of mash and dump it into the apple cider press basket. 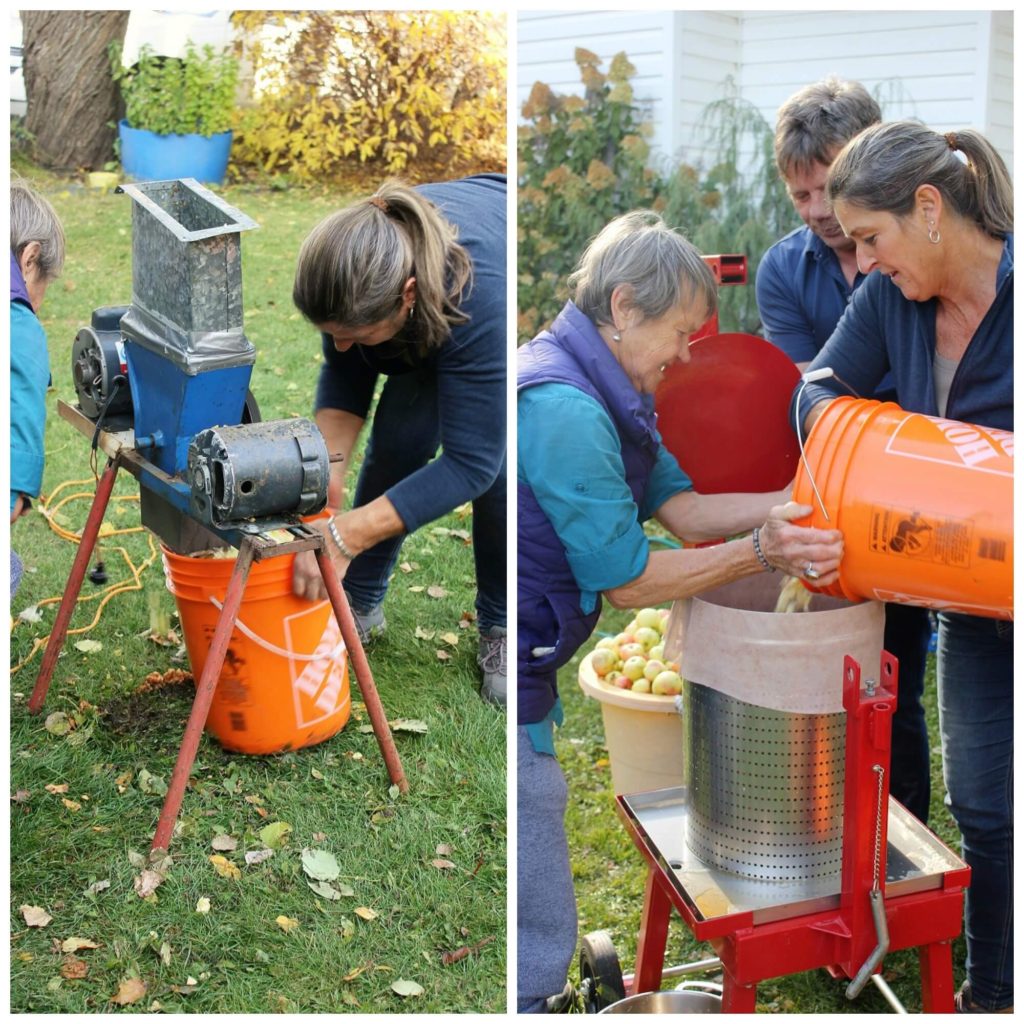 Now it's time to use some muscle power and turn that cider press. 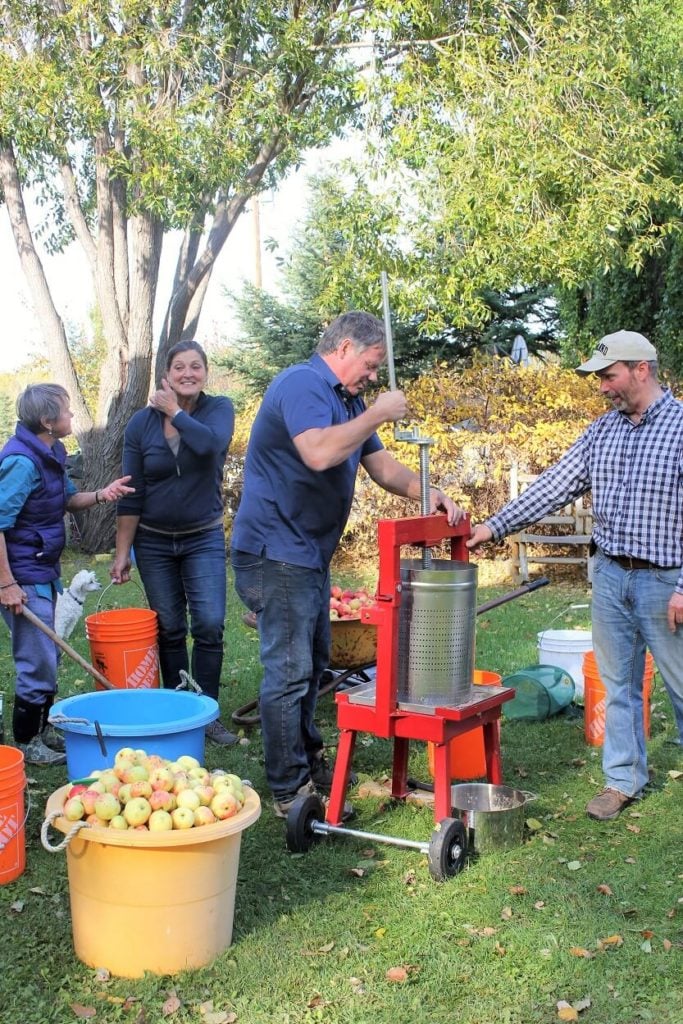 There's nothing better than a cold mug of fresh apple cider, hot off the press! It's sweet and crisp - a perfect reward for a bit of fall harvest work. 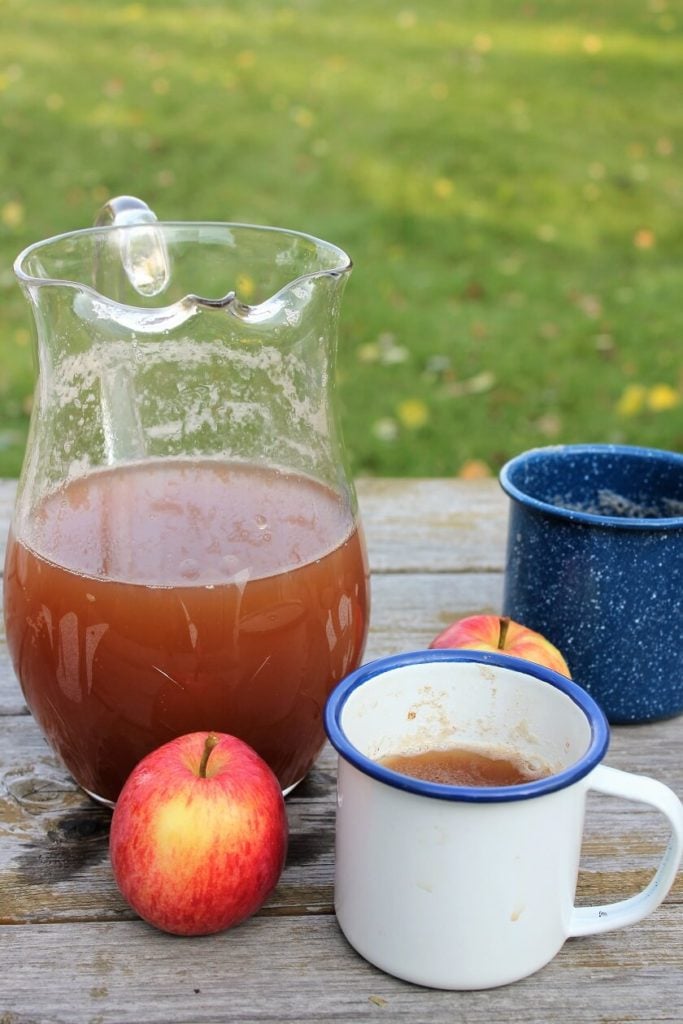 We feed the chickens as much of the squeezed-out apple pulp as they want, then the rest goes on top of the compost pile. It's Mount Applemore!

After all that hard work, it's finally time for dinner; a crackling fire, smoky sausages, and a warm bowl of polka-dot lentil soup. To finish it all off - a big German apple custard cake.

We roast some bratwursts and wrap them in these delicious buckwheat galettes warmed over the fire.

Sitting around the fire while the setting sun shines through the lacy fall trees is a special pleasure. And when you can share it with dear family and friends after you've all spent rewarding hours working together, that pleasure is deep and soul-filling. 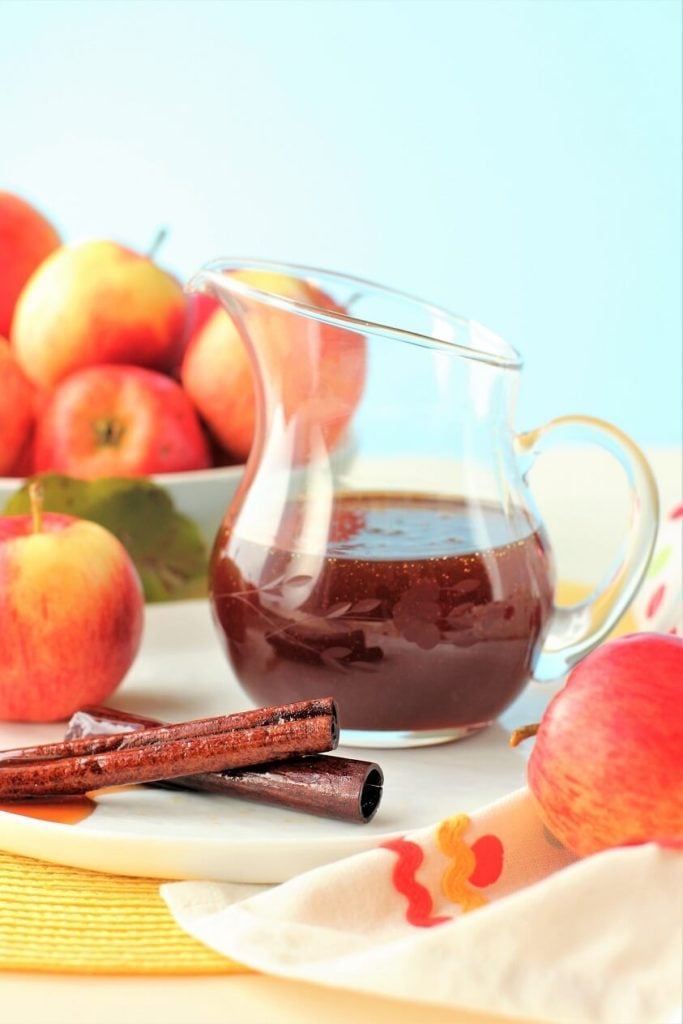 In the next days, we set several pails of cider to ferment for brewing hard cider, we enjoyed  big jugs of fresh apple cider to drink, and I had fun experimenting with making my own apple cider syrup. Wow! What a fantastic flavour explosion - apple essence concentrated down into pure liquid gold.

I tried cooking down different amounts of apple cider to see what concentration produced the right thickness of syrup and came upon the best amount for the variety of apples we grow. You may have to adjust the boiling time for your apples, but it's very forgiving because you can always thin out the finished syrup with a bit of water if it gets too thick. A couple cinnamon sticks add a light spiciness and richness of flavour. Apple cider syrup is easy to make (you just need some time) and the results are pretty spectacular.

Kitchen Frau Notes: If you don't have a cider press, don't worry. You can make your own fresh apple cider by juicing apples in an electric juicer, or buy a jug of apple cider. You can often find jugs of fresh apple cider in grocery stores or health food stores in the fall; they may be pasteurized, but that is okay. You will recognize them because the cider is brown in colour and cloudy - not clear and golden like filtered, canned regular apple juice.

Making homemade apple cider syrup isn't an exact science. The boiling time depends on several factors: the diameter of the saucepan you use and how vigourously the syrup boils. How much the syrup thickens really depends on the types of apples you have. Some apple varieties contain more natural pectin than others and they will produce a thicker syrup upon cooling. If it's too thick, the cooled syrup can be thinned down with boiling water. Start with 7 to 8 cups of syrup and boil it down until you think it's right, taking into account that it will thicken slightly upon cooling. 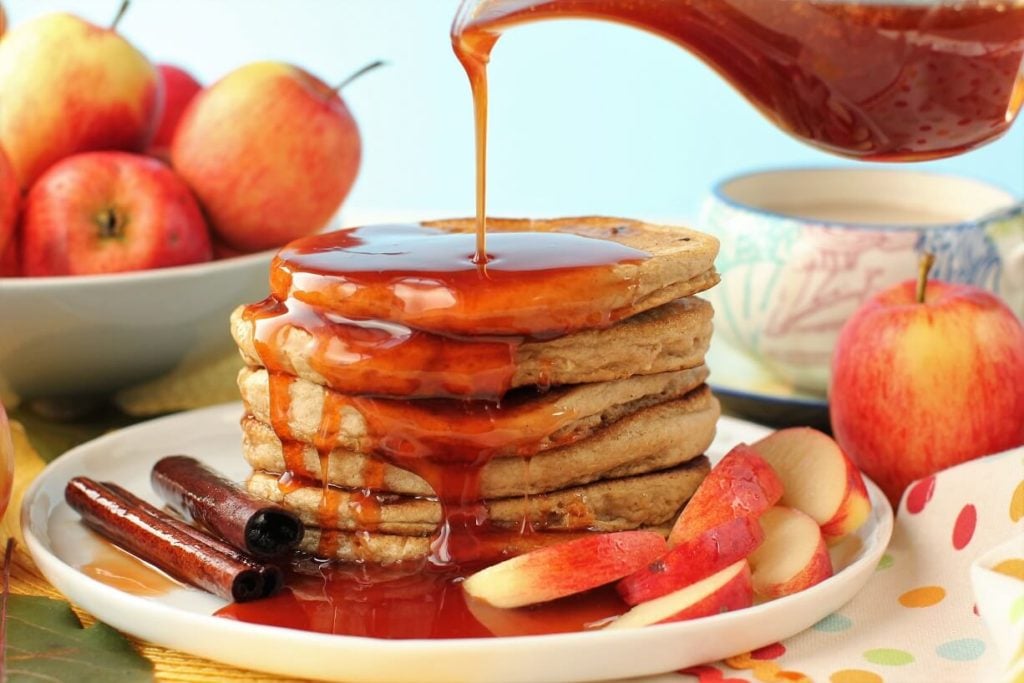 Put the apple cider and cinnamon sticks into a large saucepan (no more than half full). Bring to a boil, then lower the heat so that the cider bubbles along (uncovered) at a medium boil - you don't want it to boil over, but you want it to boil enough to evaporate the water off. Skim off any foam that comes to the top.

Let the cider boil gently for 30 minutes, then check and see if the juice is clear. If it has little bits of apple sediment floating in it (these can collect during the boiling), strain it through a clean tea towel or piece of muslin cloth, then return it to the pot.

Continue boiling the syrup until it is reduced to 1 cup. This can take another 30 minutes or even longer. It all depends on how wide your pot is and how hot your stove is. The wider the pot, the faster the liquid will evaporate. Make sure you don't leave the boiling syrup unattended. You can come and go in the kitchen, but check it often. You shouldn't have to stir it.

Have a measuring cup handy and when you think the syrup is close to 1 cup in volume, pour it into the cup to check. If it's more, then pour it back into the saucepan to boil longer. If it's less than one cup, just top it up to the 1-cup mark with some boiling water.

The syrup will look thin, but it will thicken up somewhat as it cools.

*If you're making large batches of apple cider syrup, at this point you can fill sterilized canning jars with the hot syrup and process them in a boiling water bath for 10 minutes.

Otherwise, let the syrup cool at room temperature, then stir it well (whisk it if there are uneven spots of gelling in it) and store in a covered jar in the fridge for up to a month.

If the syrup thickens too much after it cools, thin it down with a bit of boiled water.

If your apples contain so much pectin that the syrup gels after several days in the fridge, reheat the syrup to use it, and thin it with a splash of water.

Makes 1 scant cup of apple cider syrup. (Its volume decreases as it cools, and you will have slightly less than one cup of finished syrup.) 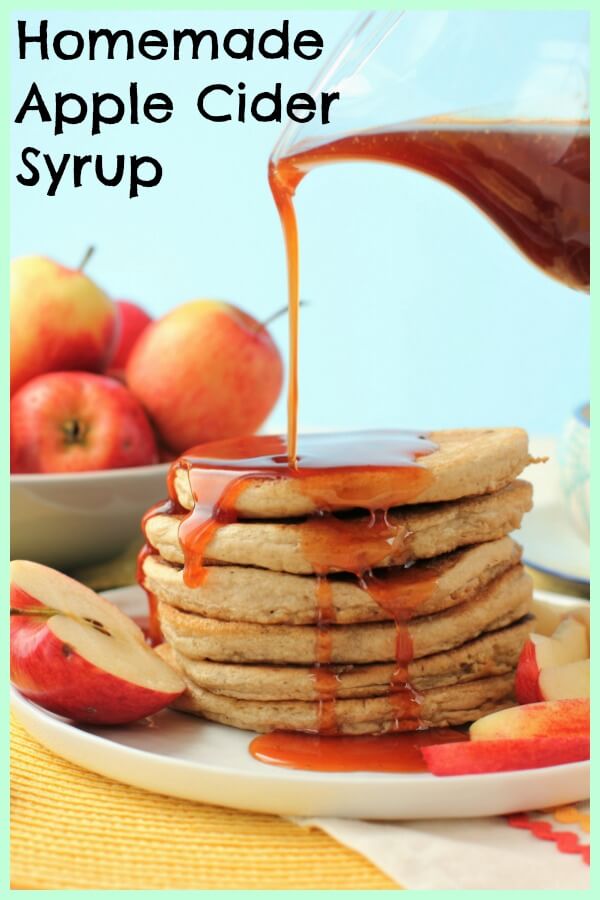