This version of meatless borsch is bright and fresh and light. It gets its rich, beautiful ruby colour from beets, and is loaded with a variety of other vegetables. The soup has the familiar tanginess of this traditional Russian and Eastern European soup and tastes great served with a dollop of sour cream. (Skip to recipe.) 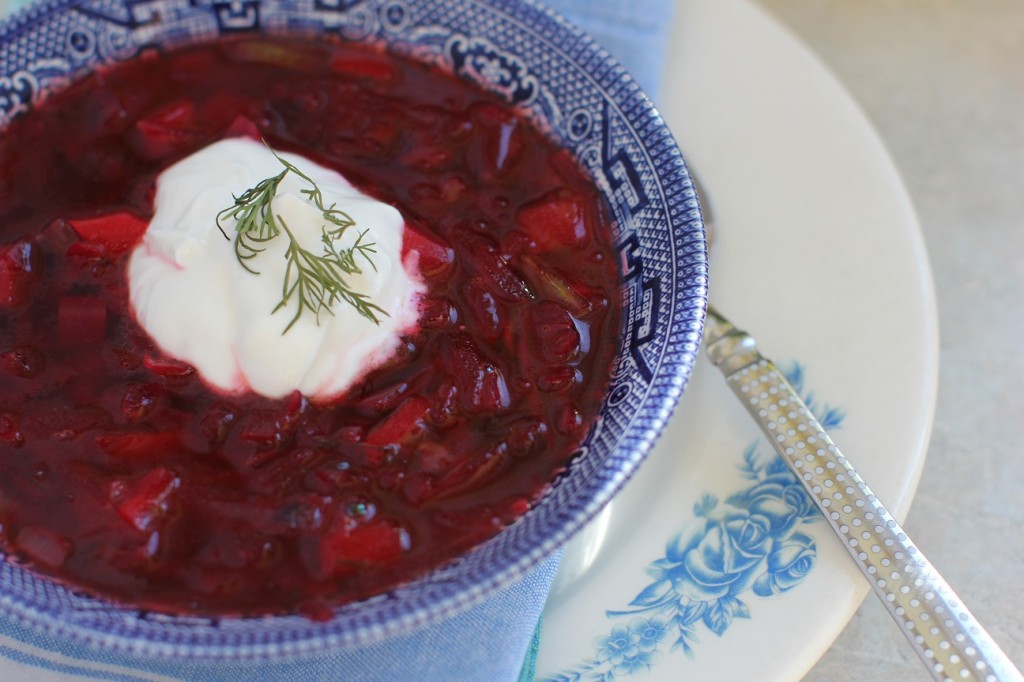 This has been a glorious week of Olympic watching and Olympic pride. It is heartwarming to think that in living rooms around the world, fans are unified in the same activity. Whether the ski jumping or biathlon or hockey are being cheered by family and friends crowded around small black and white screens in tiny homes, or by lone fans in front of massive flat screen televisions in modern media rooms, or by heads clustered around hand-held devices on coffee breaks at work, watching the twenty second winter Olympics in Sochi is an event that pulls the world together in mutual support of our athletes and the glorious tradition of sporting competition. It ignites patriotic passion, even in people who don’t regularly watch sports (like me).

And it brings heightened awareness of other countries and cultures. As all the world’s eyes focus on Sochi, we learn little tidbits of Russian culture, we think about what a beautiful place it is, and wonder what it would be like to live there. It reminds me of my German and Eastern European roots, I remember my Oma’s borscht, and I want a bowlful right now.

Oma's version is a rich and meaty one with a long-simmered broth of flavourful beef bones, ruby beets, and handfuls of fresh dill. (I will post that in the future.) I didn't have the time to make that one. To get a borscht fix more quickly, I turned to my friend Marianne’s recipe, as passed on from her Ukrainian Baba (grandma). Hers is the meatless kind that is bright and fresh and light. There are as many different variations of this Russian soup as there are ways to spell the word itself. The common element is the beautiful ruby colour from beets, and most versions contain a variety of vegetables, but other than that,  borscht, or borsch, or borshch, can vary greatly. Some variations contain meat, some add garlic, some have potatoes, or cabbage, some add cloves or herbs, some are pureed, some have cream added . . . . However most versions of borsch are tangy with a slight acidity and taste best served with a dollop of sour cream.

This Russian Borsch soup will warm your belly and take you on an armchair trip to lands of onion domes and caviar, vodka and rye bread.

Imagine you are streaking down the chutes or flying across the snow on skis. Or imagine yourself standing on that podium, waving to your adoring fans.

Kitchen Frau Notes: Marianne's baba's borsch recipe uses plain water, but I like to use a few cups beef stock for a richer flavour. Use all water, or some vegetable broth, for a vegetarian version. Adjust the amount of salt for your taste - if you are using any portion of broth, you will need less salt than the 1½ teaspoons stated in the recipe. I use about ½ teaspoon of black pepper. The original recipe uses peas, but I have sometimes substituted cabbage, which is commonly included in borscht recipes.

Our family likes our borscht tangy, so I add the 2 tablespoons of vinegar right away. If you're not sure, add 1 tablespoon at the start of cooking, then taste and add the second tablespoon if you like.

Omit the sour cream, and replace the butter with olive oil for a dairy free version. 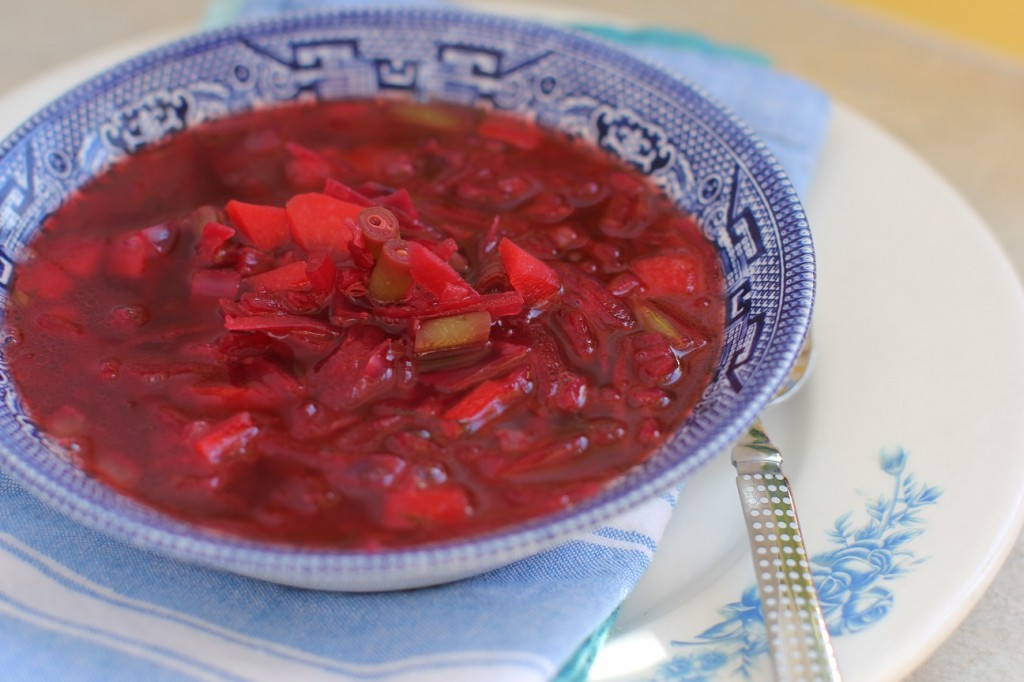 Boil the beets in their skins for ½ hour or until tender when pierced with a fork. Drain, trim the ends and peel them by slipping them out of their skins. I do this in the sink under cool running water over a colander to catch the peels. Shred the cooked beets on a box grater (makes about 2½ cups). Place them into a large pot. 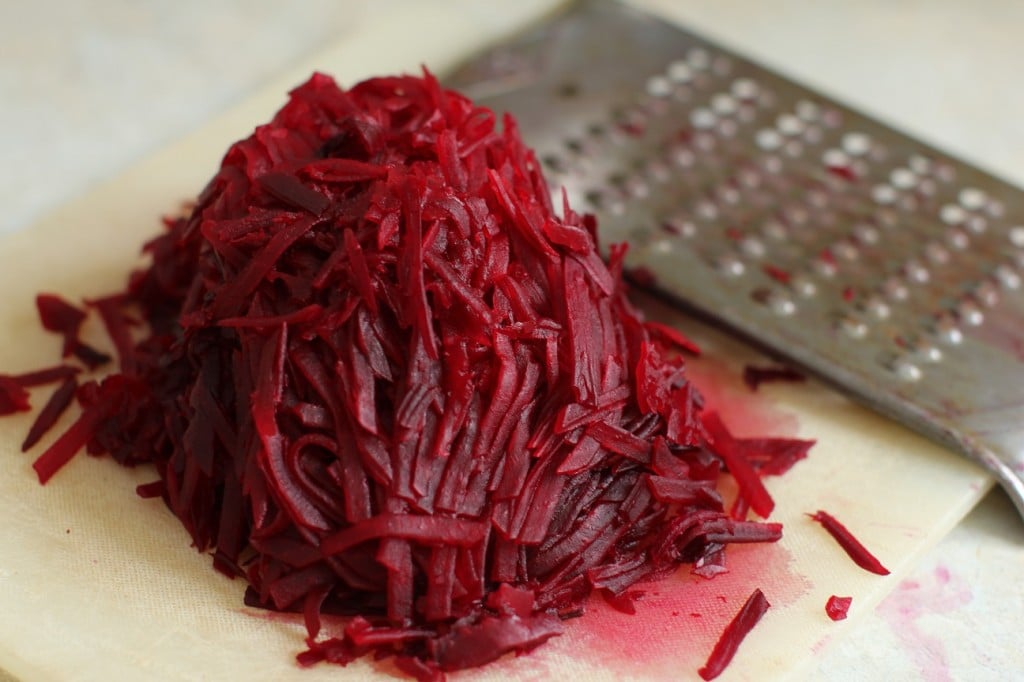 Bring to a boil, then reduce heat to low, cover, and simmer for 30 minutes.

Meanwhile, melt the butter in a small skillet, and add the ½ cup chopped onion. Slowly cook until the onion starts to turn golden.

When the soup has finished simmering, stir in the onions and butter. Taste for seasoning and add more salt, pepper and the remaining tablespoon of vinegar if it needs more spice or tanginess.

Serve with a dollop of sour cream or drizzle of heavy cream in each bowl and a slice of buttered  rye bread. 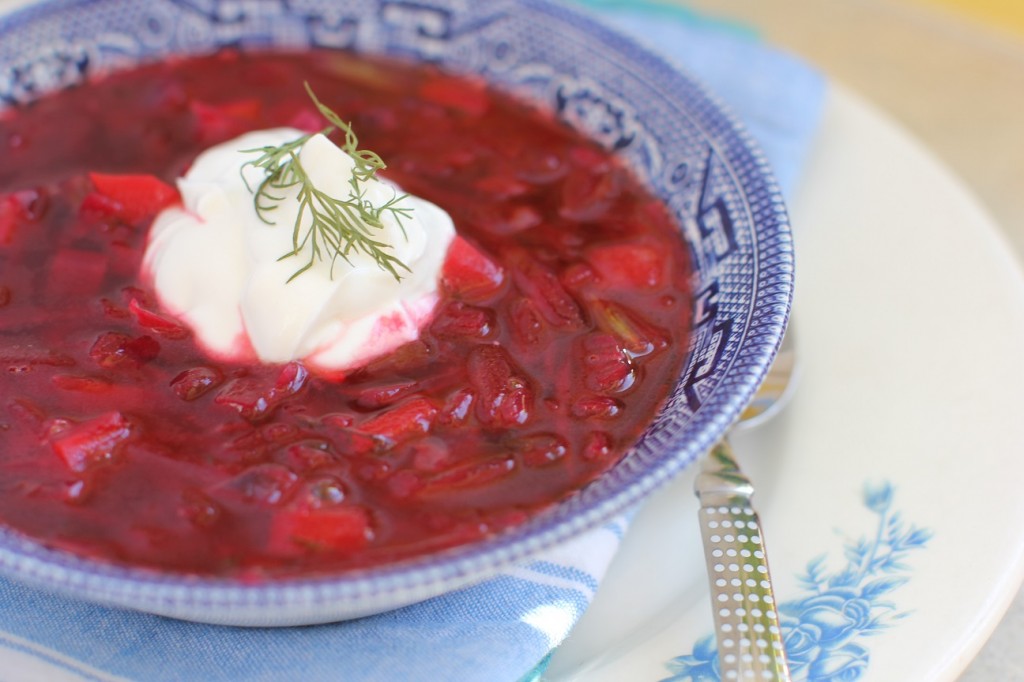