Celebrate fall with a bowl of this smooth and silky pumpkin soup, then have fun loading it with crunchy bacon, toasted pumpkin seeds and the bite of creamy blue cheese. (Skip to recipe.) 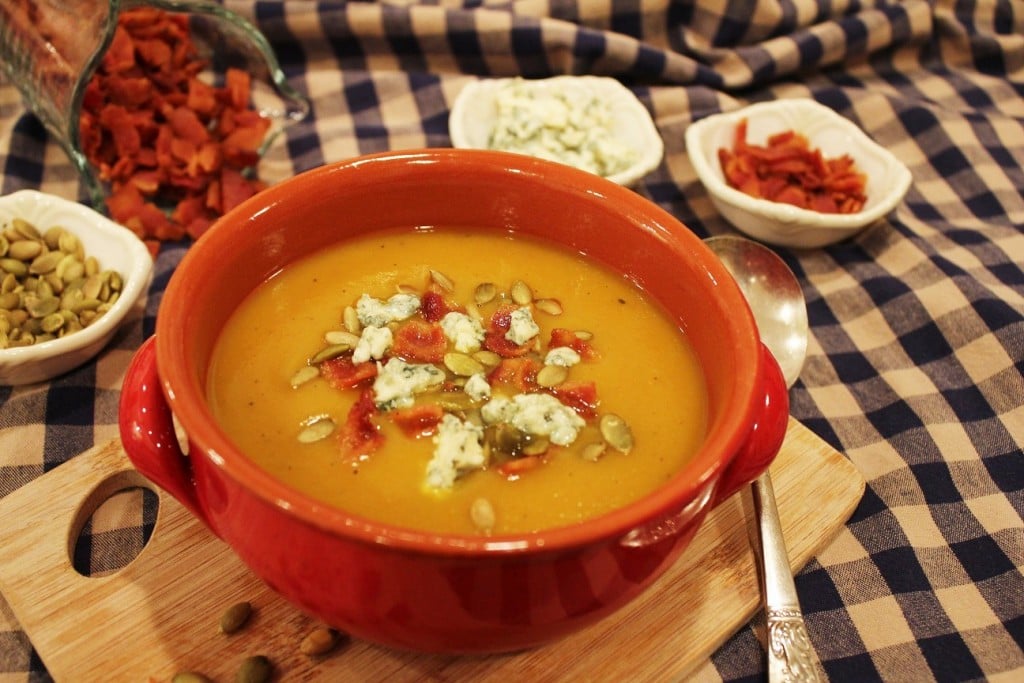 Oh, the pumpkin patch has been overflowing, and there are pumpkin recipes everywhere -  pumpkin granola in the pantry and pumpkin soup in the fridge and pumpkin cake on the counter, with pumpkin frosting to glop onto it and . . . and . . . (you get the picture)                . . . and oodles of pumpkins still ripening on my basement floor.

But I can't get enough of them.

I made a huge vat of this pumpkin soup for a pumpkin-carving party this weekend and we have been enjoying the leftovers these last few days. I think it's the silky texture and hit of ginger that has me in love (but I think it's loading-the-soup-with-the-fun-garnishes that has the rest of my family asking for more).

You know, I think my one pumpkin plant was in cahoots with my zucchini plants this year (or at least being coached by them) because it went a little crazy, too. It produced over 20 pumpkins (enough for all the pumpkin-carving guests, with a small army of the green-tinged orange monsters left over).

The plant sprawled over the edges of the garden into the lawn, and was such a jungle that I never ventured into the center of it. So when the frosts came and it was time to bring the pumpkins inside, I was astounded by the number of squashes, in varying stages of greens and oranges, hiding under the leafy canopy.

Eeek! What to do with them all? 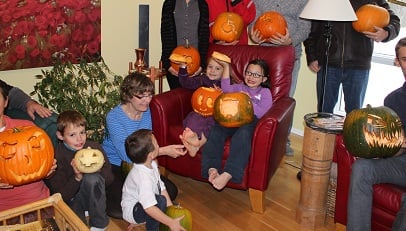 then bake the rest. It's pumpkin time!

Kitchen Frau Notes: Whenever I make bacon bits - I do a whole pound of bacon, or two, since I've got a greasy pan going anyway.

Keep the whole block of bacon slices together, as they are in the package, transfer them to a cutting board in one bundle, then slice them crosswise into ½ to ¾ inch pieces (works even better when they're still half frozen). Then fry them, stirring often, over medium-low heat in a high-sided heavy pan until they are just nicely browned and crisp, but still a bit soft. It takes a while. Take them out with a slotted spoon and let them drain on several layers of paper towel on a plate. When cool, transfer them to a ziplocked freezer bag and store them in the freezer for whenever you need bacon bits. 1 pound (450gms) raw bacon makes about 1 heaping cup of bacon bits, depending on how crisp you make them.

In this soup, the addition of the potatoes helps to naturally thicken the soup, and makes for a very velvety texture when pureed in a blender. 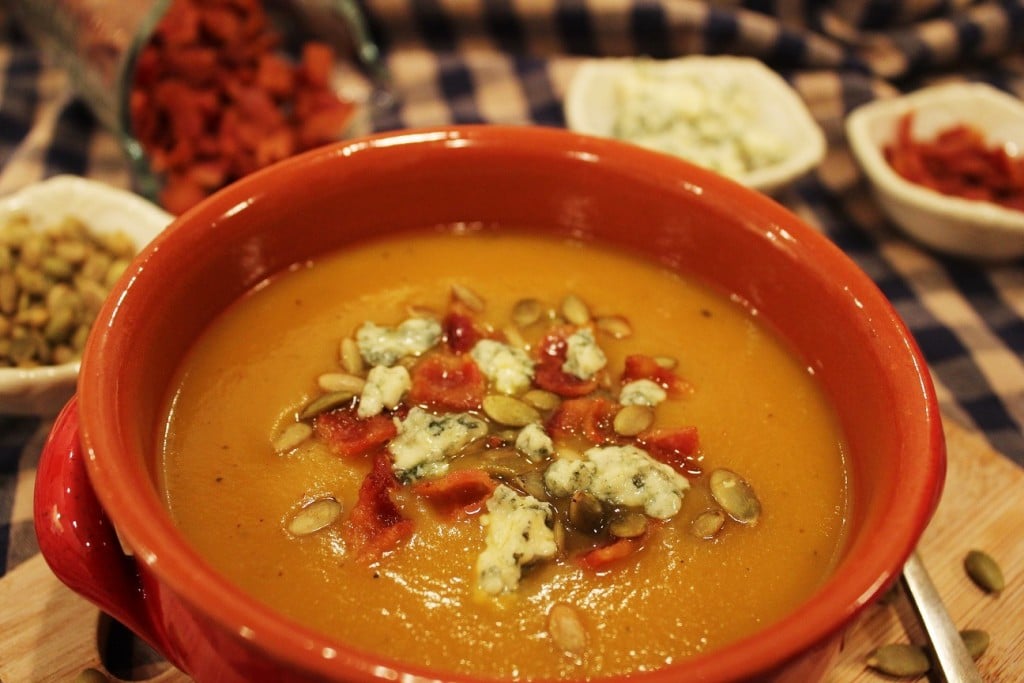 for the garnish, any combination of:

Heat the oil in a large heavy-bottomed soup pot over medium heat. Add the onions and cook until translucent and starting to get golden, about 10 minutes. Add the garlic and ginger and cook for 2 more minutes.

Add the chicken broth, bay leaves and diced potatoes. Bring to a boil, then turn the heat down to a simmer and cook, uncovered, until the potatoes are tender, about 15 minutes.

Remove the pot from the heat. Remove the bay leaves from the soup and add the pumpkin. Puree the soup, in batches if necessary, in a blender (or with an immersion blender, which may not be quite as silky smooth, but tasty all the same).

Return the pureed soup to the pot and add the brown sugar, salt and pepper. Taste and adjust for seasoning. You may need up to ½ teaspoon (2.5ml) more salt, but it all depends on how salty your broth was. Bring back to a gentle boil. Add some more water if you like a thinner soup.

Serve with your choice of garnishes on the side for diners to help themselves.

Roasted Pumpkin Seeds, and How to Carve a Jack o'Lantern

Pumpkin Pie Granola and How to Bake a Pumpkin

« Maple and Mustard Glazed Turkey with Killer Gravy
A Trio of Warm Milks to Curl up With - Winter is Here! »