Not quite sure how to roast a turkey? It’s easy to have a fantastic holiday feast if you follow these easy instructions. Make it special with a tasty Maple Mustard Glaze and a learn how to make a Killer Gravy (it’s gluten free, too!) Happy holidays! (Skip to recipe.) 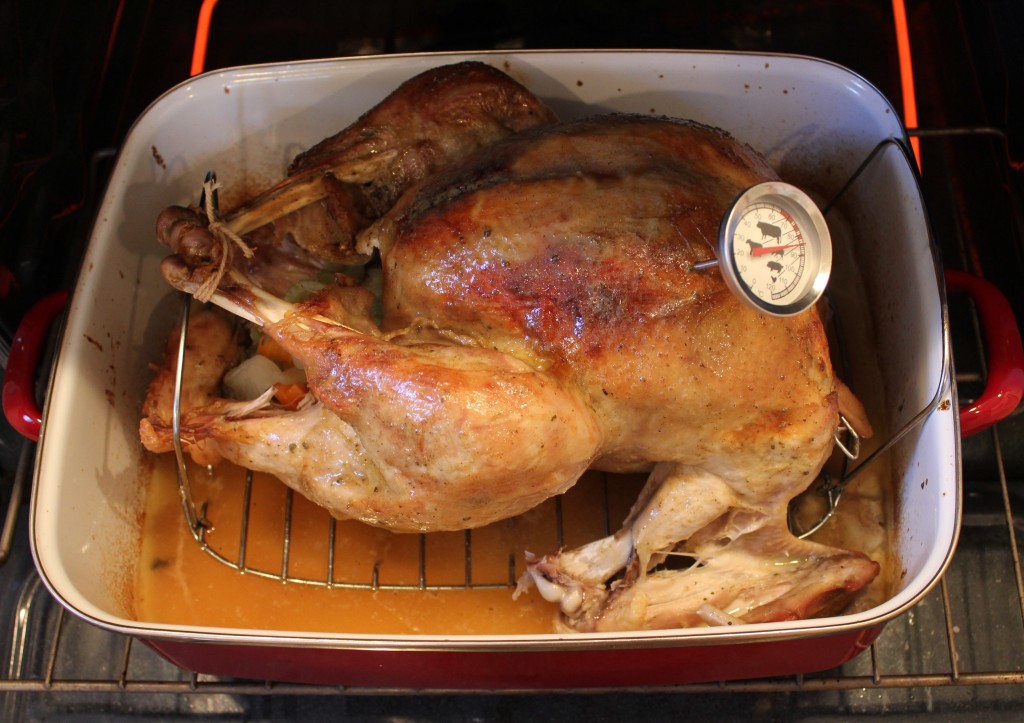 Oh, the sight of the regal holiday bird, golden and bronzed, enticing us with its mouthwatering aroma . . . the signal that the holiday feast is soon to be served.

Don’t be intimidated by a turkey. There are a few tricks here to make the process easy. Once you know how to roast a turkey you will be the star of the Gobbler-Roasters.

I was laying in bed one night trying to figure out how to get butter under the turkey skin to get that beautiful basted breast, but without getting my hands all greasy from dealing with the slippery butter, and I had a Eureka! moment with the technique below. The maple and mustard keep the butter from freezing too hard and make it easy to slice – then tucking it under the skin takes only a second. I’m sure somebody else has probably already figured it out, but it was new to me, and it works like a charm. The maple mustard flavour complements the turkey wonderfully, and adds depth to the gravy.

As for the gravy, using vegetables to add flavour to the broth is a trick I learned from a German friend, and using star anise comes from my mom. She would never make a chicken soup without it, and neither would I, so it’s a natural spice to add a subtle hint of What is that flavour? to the gravy. And consider hunting down sweet rice flour (see note at the end of the recipe) to thicken the gravy. It’s your secret weapon, and worth keeping in the pantry to use for all your gravies. 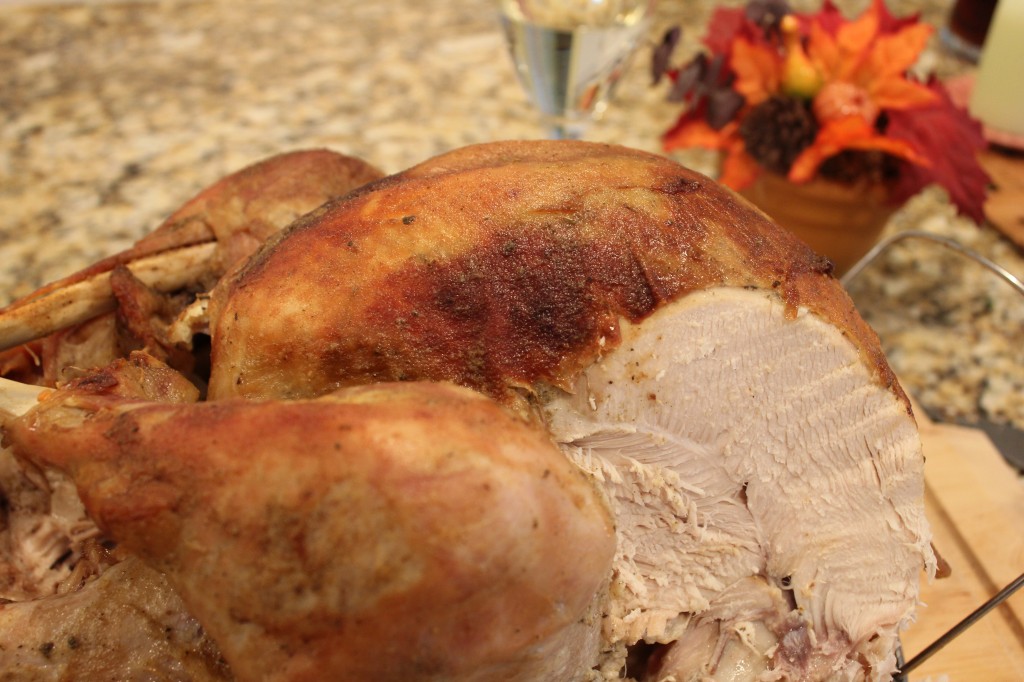 For the flavored basting butter:

For the turkey and gravy:

How to Roast a Turkey

A day before you are planning to roast the turkey, make the glazing butter. (I do this when I take the turkey out to thaw, so that I don’t forget.) In a the bowl of a mixer, combine the softened butter, maple syrup, dijon mustard and poultry seasoning until it is smooth (you can also do this by hand, but it will take quite a bit longer). 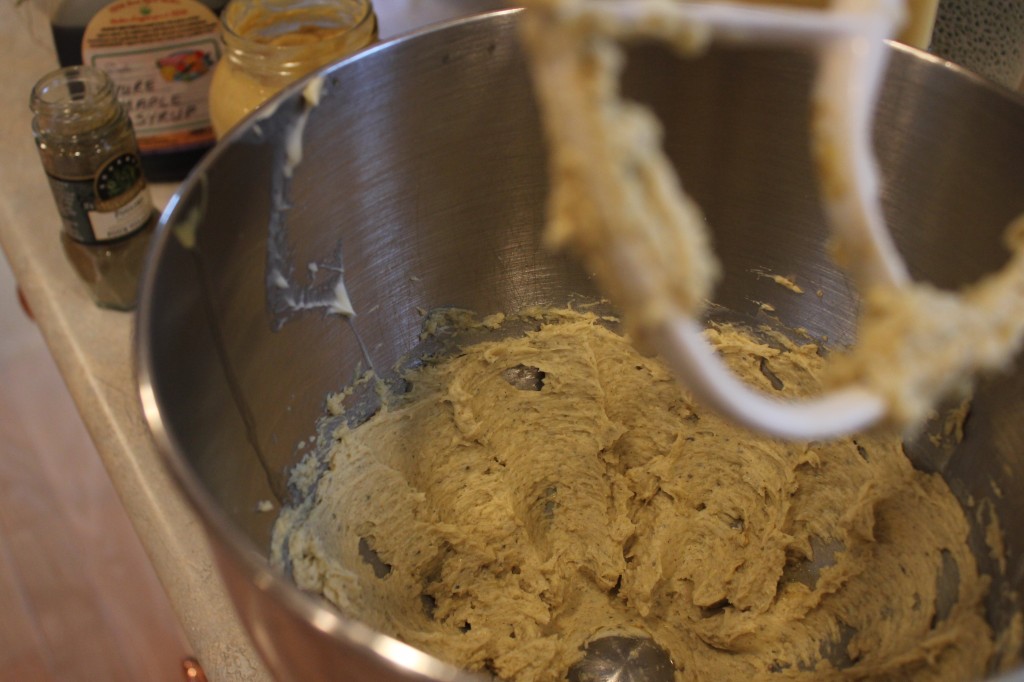 Divide the butter into two equal-sized portions and put one into a small covered container to keep at room temperature until roasting the turkey. The other half, place onto a square of plastic food wrap or wax paper and shape into a 3-inch (7.5cm) log with a spatula or spoon. 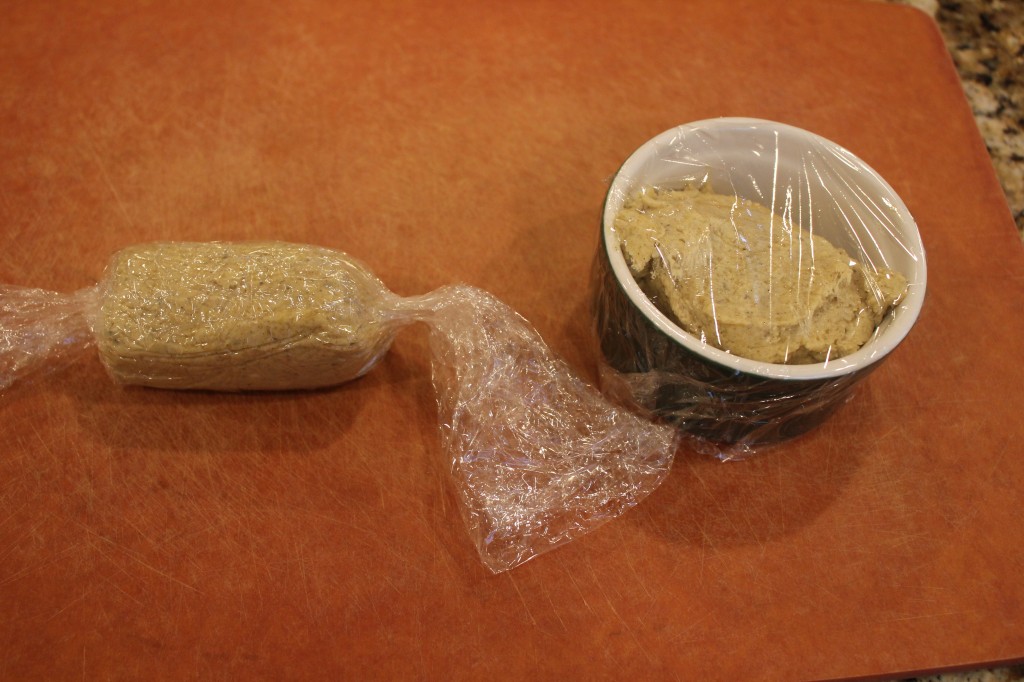 Wrap the butter and tidy up the shape, flattening the ends. Place it on a flat surface in the freezer, to freeze until solid.

Several hours before roasting, take the turkey out of the refrigerator to come to room temperature.

Remove the neck and any giblets (often packed in a paper packet) from the cavity of the bird and reserve. Rinse the turkey and pat it dry with paper towels. Preheat the oven to 325°F.

Remove the log of glazing butter from the freezer and slice it into thin slices. 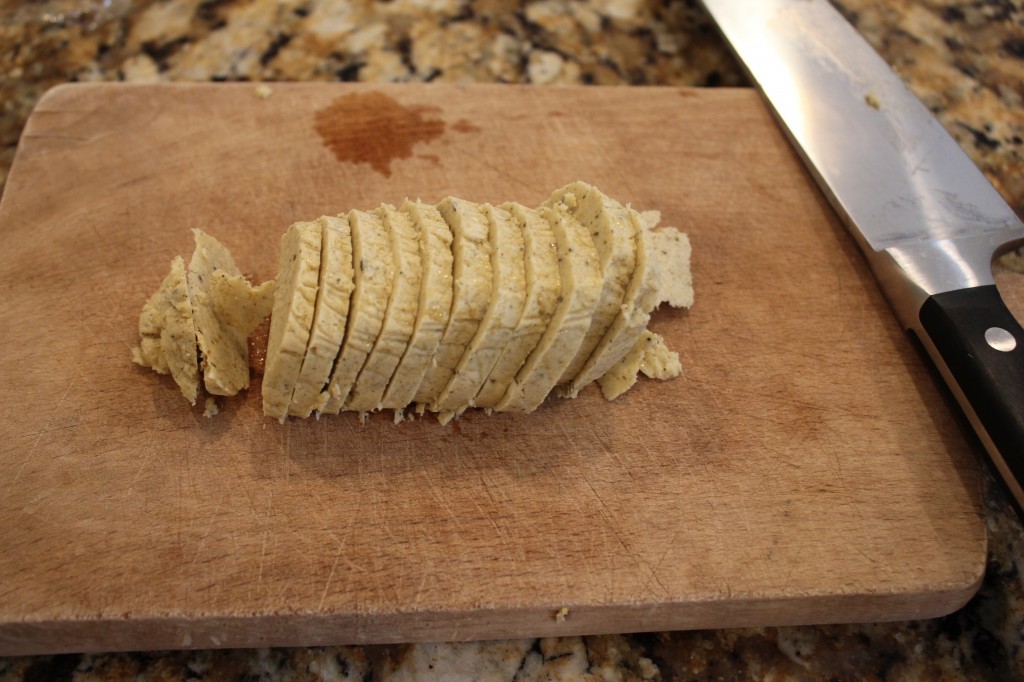 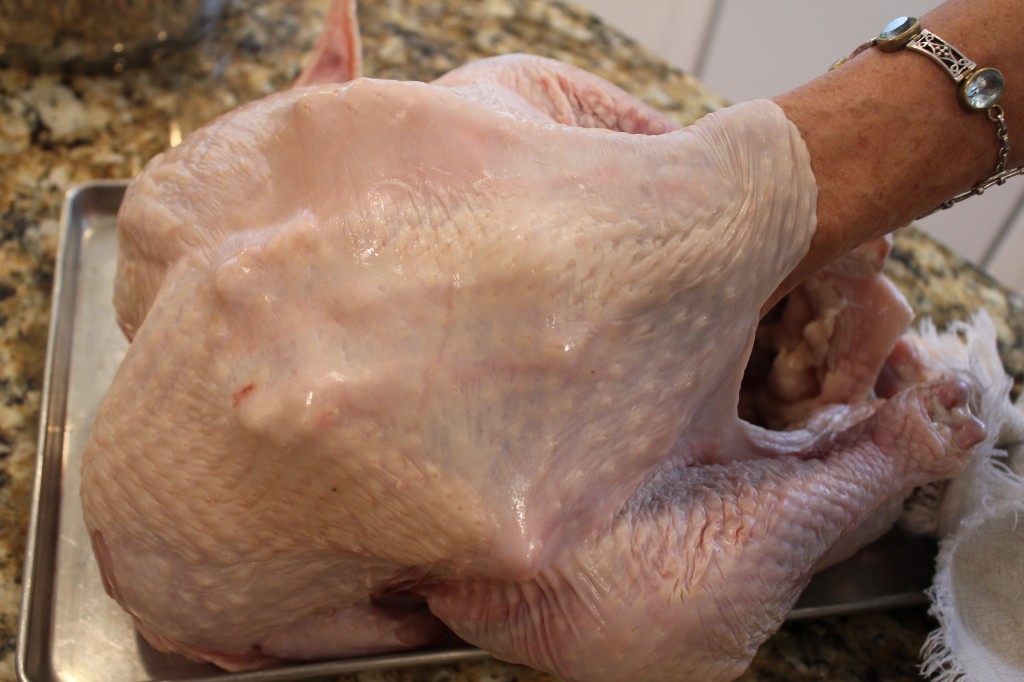 Mwah-ha-ha….the hand in the turkey 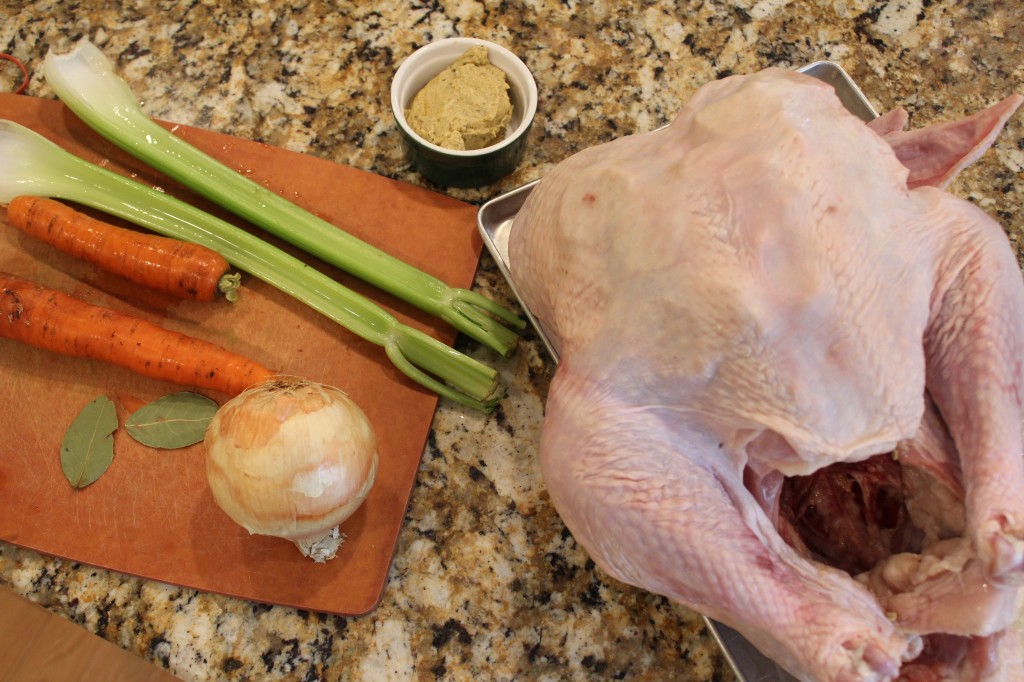 Peel and chop the carrots, onions and celery into large dices. Place two of the bay leaves into the cavity of the turkey, then add the diced vegetables. Truss the turkey by tying the legs with kitchen twine, or by tucking the ends of the legs under the flap of skin at the tail end, if it comes with one pre-cut.  Tuck the wing tips under the back. If the legs come out from the flap during roasting, tie them together then with kitchen twine. 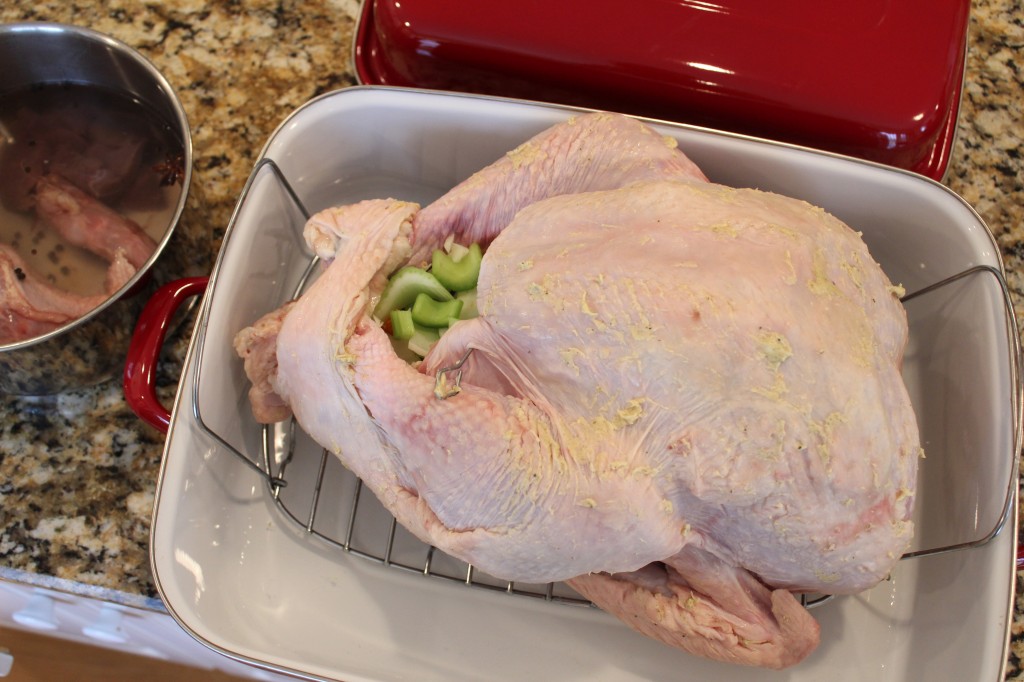 Place the turkey into the preheated oven (you may need to remove some of the racks).

Once the turkey is roasting, put the reserved neck and giblets into a saucepan. Cover with the remaining 4 cups of water, and add the bay leaf, star anise pod and peppercorns. 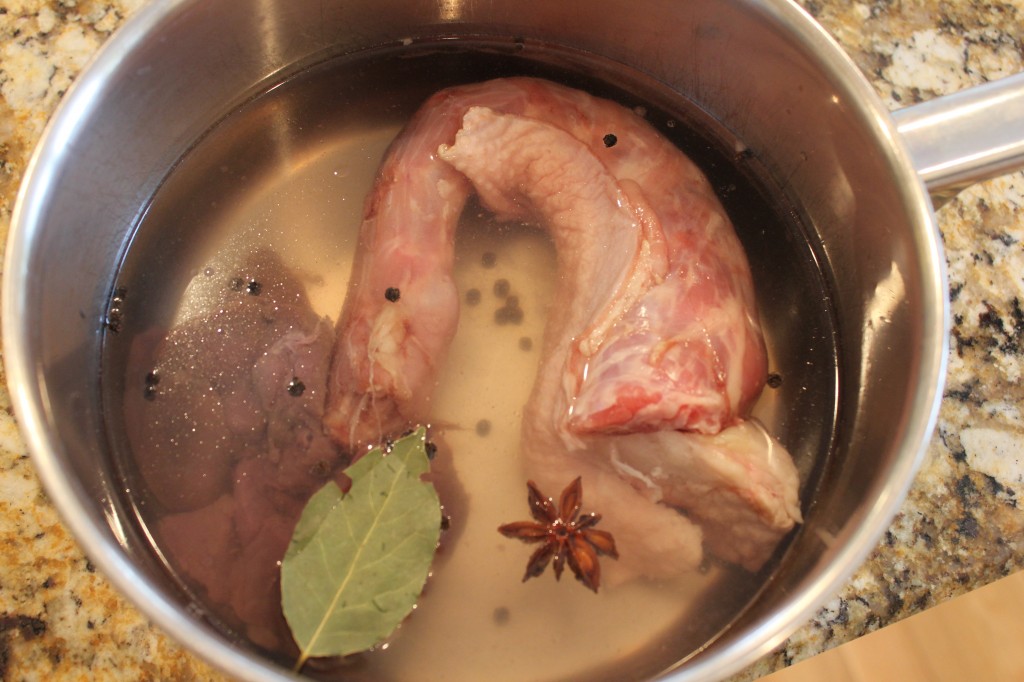 Bring to a boil, then reduce the heat to low, cover the saucepan and leave it to simmer slowly the whole time the turkey is roasting. This will be the base for your gravy. The heart and gizzard add good flavor, but if your giblet packet contains the liver I would advise removing it as soon as it has come to a boil, and using it for another purpose (my cats love it), or leaving it out altogether. Leaving the liver in the broth to simmer for a long time will add a bitter taste to your gravy.

Allow the turkey to roast for about 15 minutes per pound, or a little less, using the times for ‘unstuffed’ turkeys (the cut-up vegetables are much less dense than bread stuffing and still allow warm air to circulate inside the turkey). During the last hour of baking, periodically baste the bird with the remainder of the soft maple-mustard butter by brushing it all over the skin using a pastry brush. Insert a meat thermometer into the turkey breast, not touching the bone, and start checking the temperature after 3 hours. I find that by cooking the turkey this way, in a covered roaster with water in the bottom, it usually cooks faster than the recommended time because of the moist heat. It browns nicely if the roaster is large enough and has a lid, but if you find the turkey isn’t browning enough, remove the lid (or the foil) during the last hour to half hour of the roasting time.

When the internal temperature of the breast meat has reached 170°F (77°C), remove the turkey from the oven, and transfer it to a rimmed cookie sheet or cutting board. Remove the vegetables from the cavity with a large spoon and reserve them. Tent the turkey with foil and let it rest for 30 minutes to allow the juices to evenly redistribute in the meat, allowing for maximum moistness.

While the turkey is resting, make the gravy:

Pour the juices from the roasting pan through a strainer into a large saucepan. Also strain in the liquid from the simmering neck and giblets. With a large spoon, remove as much fat as you easily can from the top of the broth, leaving a few tablespoons in to add flavor to the gravy. (Reserve this combination of melted basting butter and turkey fat to use some of it instead of butter in  the mashed potatoes, then refrigerate the rest to use for frying.) Add the reserved diced vegetables from the turkey to the broth. Bring to a boil, and allow to boil for 5 minutes (to get any extra flavor from the vegetables). Using a slotted spoon, remove the vegetables to a small serving bowl and keep warm. (Toss with a bit of butter and salt and pepper and serve alongside the turkey.)

Add the salt to the broth. In a small jar with a lid, make a slurry of the ¼ cup sweet rice flour by mixing it with about ½ cup (120ml) water and shaking vigorously until there are no lumps. 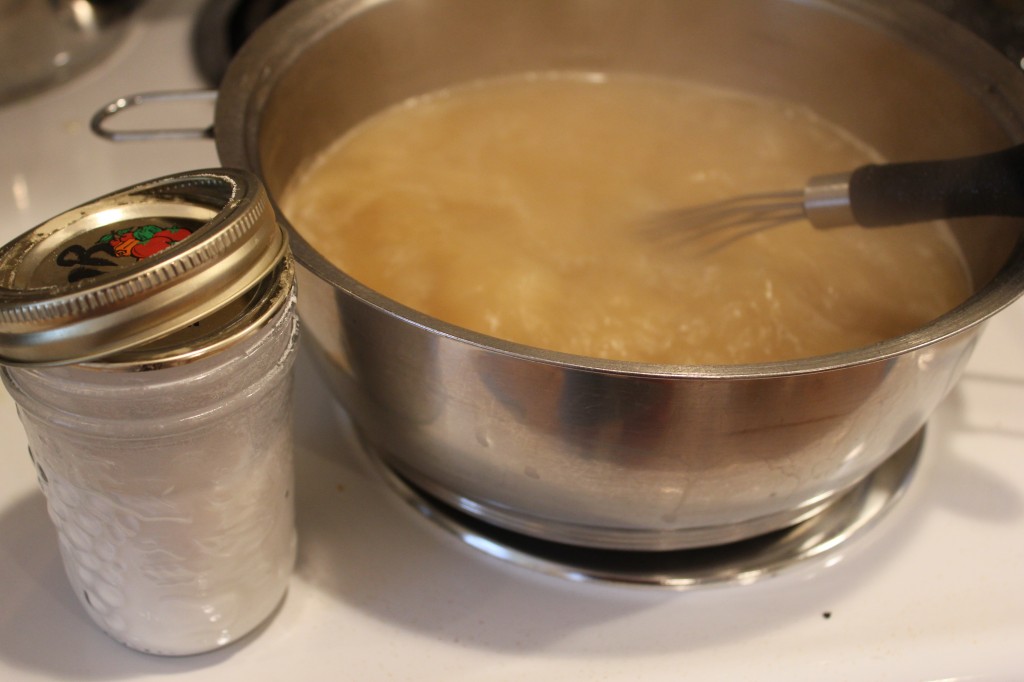 Bring the broth back to a boil, and pour the flour slurry in a slow stream while constantly whisking with your other hand. If it is not as thick as you like, make up some more flour and water slurry, and whisk in small amounts at a time until the gravy is thickened to your liking. Taste and season with pepper, plus more salt if needed. It may need up to a teaspoon more salt. (A gravy should be well salted, as its saltiness is diminished when combined with the mashed potatoes.) 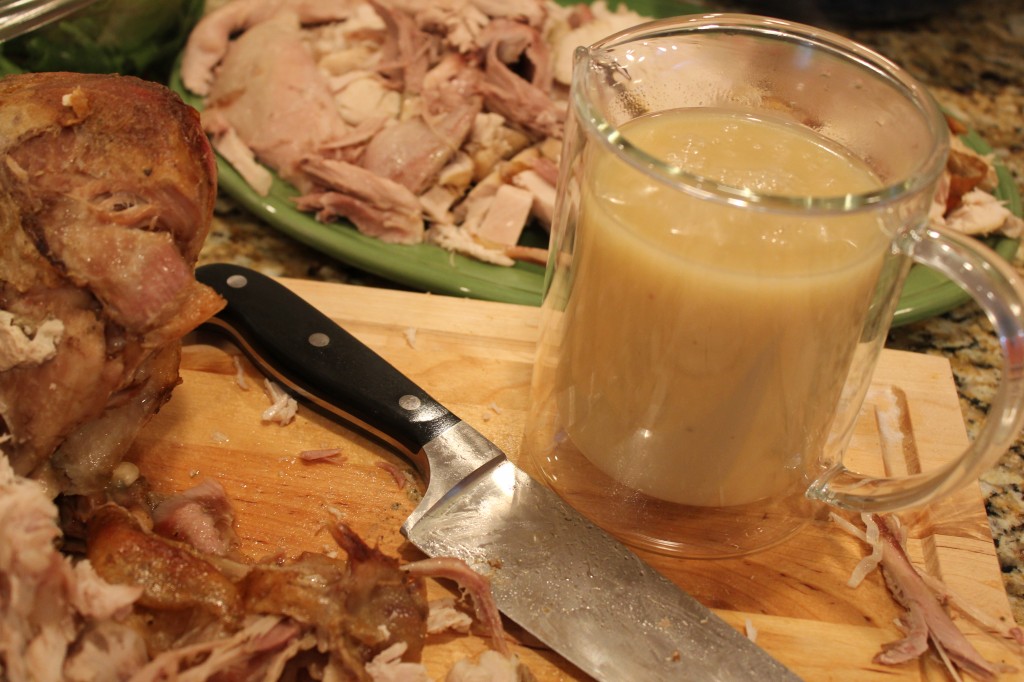 Keep the gravy warm and return your attention to carving the turkey (or pass the job on to a willing volunteer, that is – delegate someone). 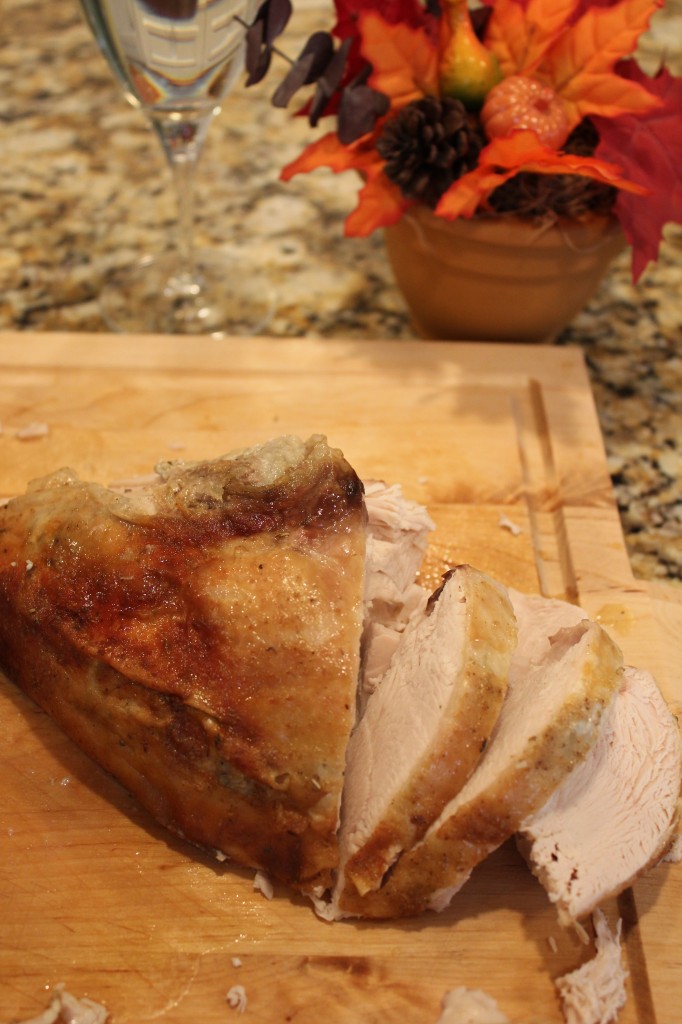 Kitchen Frau Tip: An easy way to carve the breast is to remove each breast-half in one piece, gently prying it loose from the breastbone with your fingers, then cut crosswise into slices. 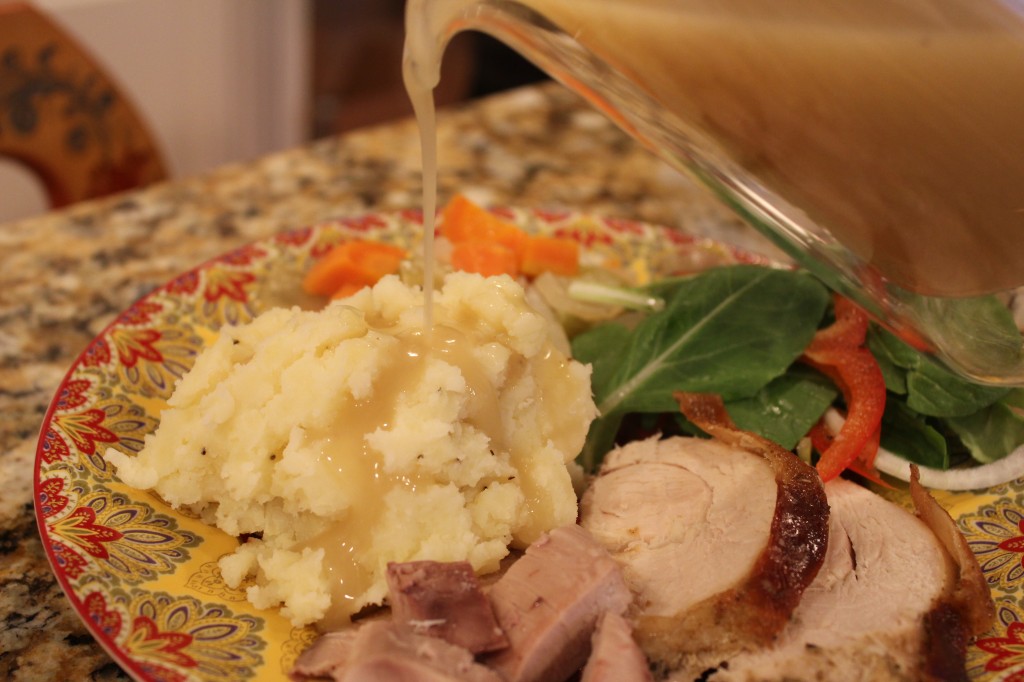 Serve your turkey with:

Use your leftover turkey to make: