Make an authentic Spanish paella to feed a crowd! This one's loaded with pork, chicken, seafood, and lots of vegetables. Easy and tasty! (Skip to recipe.) 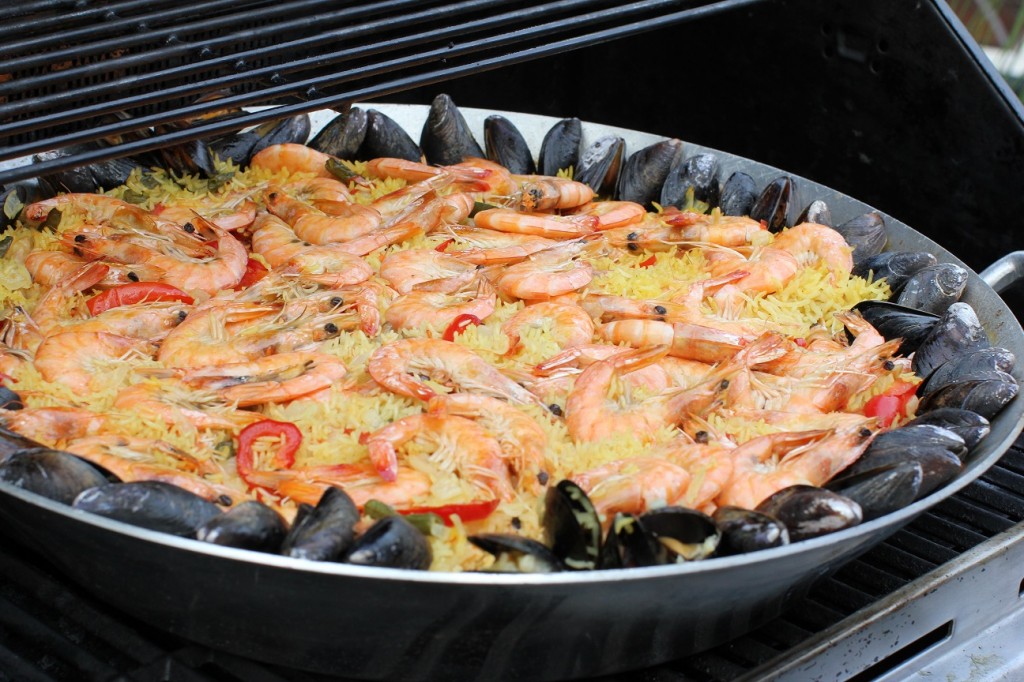 This summer we were invited to a Spanish Paella Party.

What fun it was! 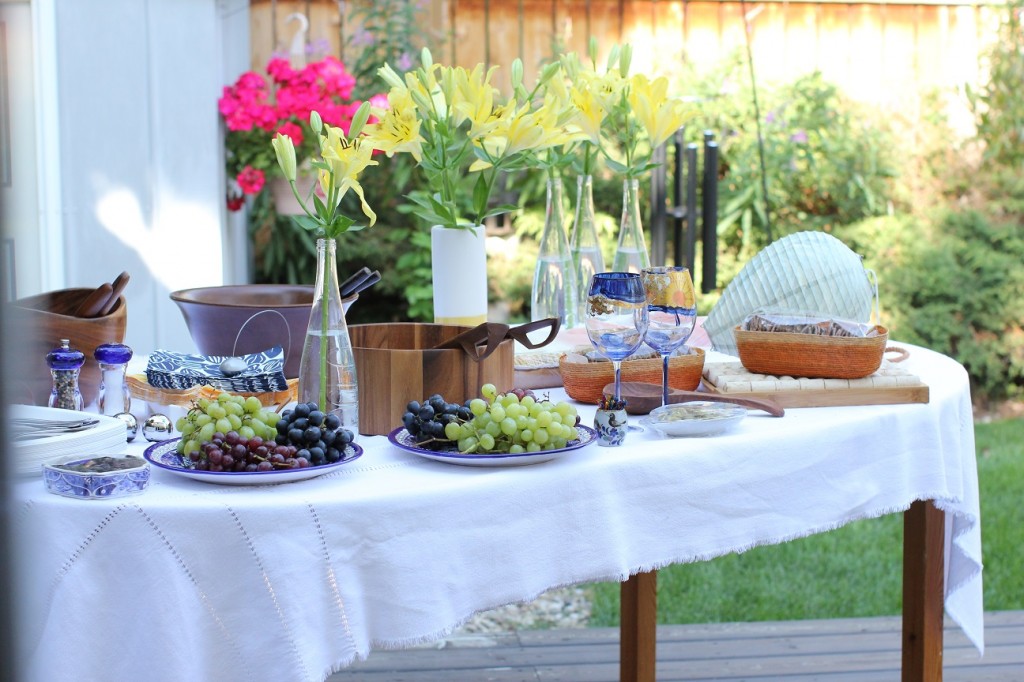 I've always wanted to make paella but it's one of those things that seemed to be forever on my food bucket list, that I never got to.

Helping (and mostly watching, if truth be told) our Spanish/Mexican friend Gilbert make it was much better than stumbling through it myself.

For me it was a chance to fulfill my insatiable thirst for learning to make new foods - for Gilbert it was a trip to his past. He grew up watching his mother make paella countless times in Mexico - watched her hands fly as she cut the meats and vegetables with sure and practiced  movements, stirred in the seasoning without measuring, sautéed the  fragrant onions and garlic til just right, and lovingly tended the large flat paella pan as the rice swelled and fluffed to meld the flavours of the varied ingredients together.

He grew up watching her, but like so many of us the world over. . . he never thought to learn how to make it from her . . . never asked his mother to write down her recipe or explain her technique, never hovered close at her side as she cooked it . . . just enjoyed the wonderful flavours of a much-loved family dish that was intricately bound to his childhood memories of food.

So now, with no chance to ask his mother those questions anymore, he needed to rely on his memory, the questioning of siblings, a little research, and the help of his wife, Christine, to put it all together and see if he could come up with a dish that would transport him back to to those special childhood family memories of happy meals shared with loved ones.

All of us friends and guests present that day at Gilbert and Christine's Paella Party had the greatest fun being the beneficiaries and hungry taste-testers of the mouthwatering results of his reconnect with his past.

Plus, our hosts had set up a wine-tasting, too, so senses were heightened, and much laughter joyfully seasoned the meal.

Paella (pronounced pie-ay-a) originates in the Valencia area of Spain, and is usually cooked outdoors over a flame or grill, giving it a characteristic smoky flavour. The barbecue works wonderfully for this. A wide flat steel paella pan is traditional for making paella.

Gilbert's maternal great-grandfather emigrated from Spain to Mexico, called 'New Spain' (Nueva España) at the time, and brought all his Spanish traditions with him, including the love for his family's authentic paella, which was passed on and enjoyed through successive generations in the new land - a family heritage that will keep on living into the next generations. This recipe is rich with chunks of chicken and pork, large tender shrimp and mussels, studded with bright vegetables, and coloured a beautiful golden hue from precious saffron threads. It is a treasure to look at and a lip-smacking delight to eat. 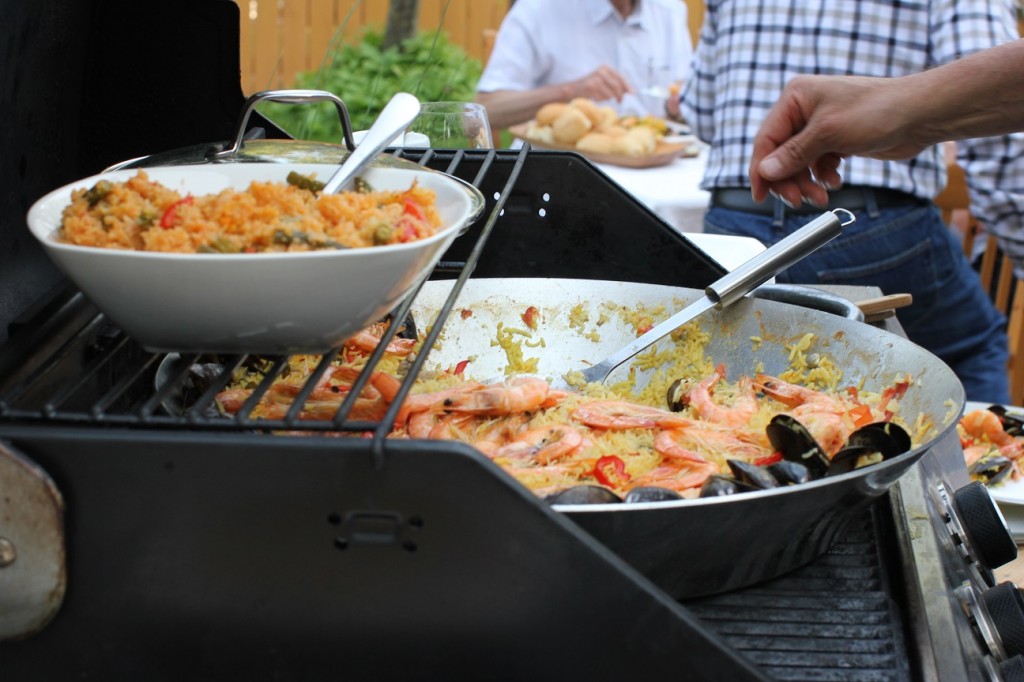 Christine made several variations of homemade aïoli (garlicky mayonnaise) to serve with the paella, plus some delicious salads. 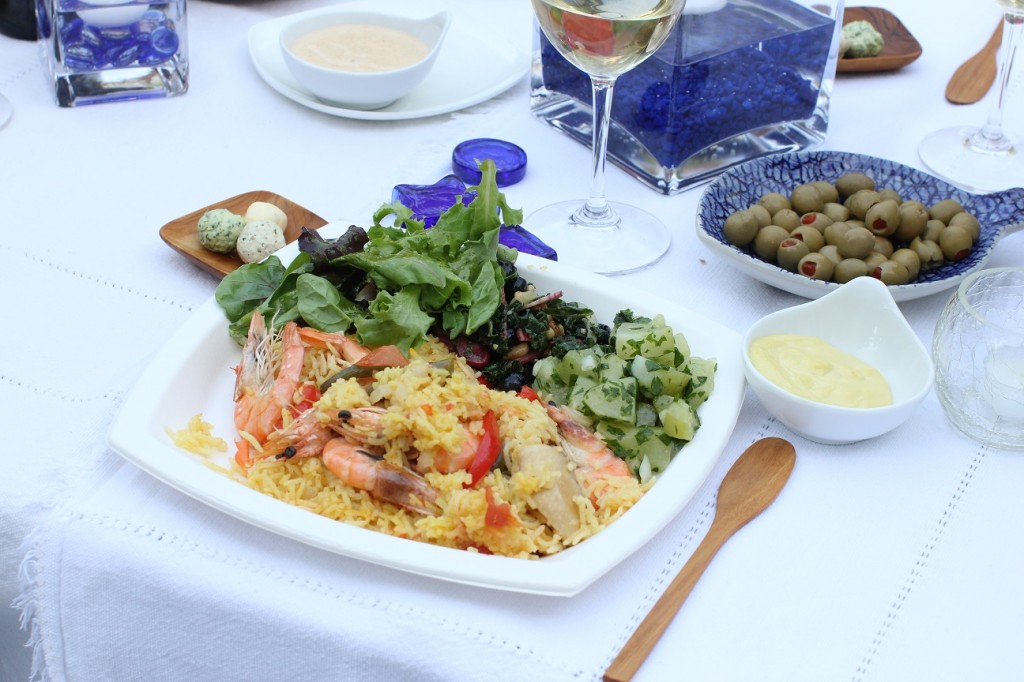 Here is Gilbert's version of authentic paella, as close to how his mother made it as he can remember. It's a mixed paella, containing both meat and seafood, and it's made for a crowd, but you can scale it down for a smaller group.

Kitchen Frau Notes: Onions, garlic, tomatoes and red peppers are traditional for a paella. Other vegetables could be substituted for the green beans. Also, use other meats in place of the pork and chicken if you like, even a bit of chorizo.

This sounds like a lot of oil, but trust me - it works. Oil is a flavour carrier, and olive oil is used liberally in Spanish cooking. It actually has many health benefits. The dish is not oily at all, just full of flavour, and for this quantity of paella the amount of oil is not too much (just a bit over 1½ tablespoons per generous serving).

Salt the dish well, to taste. 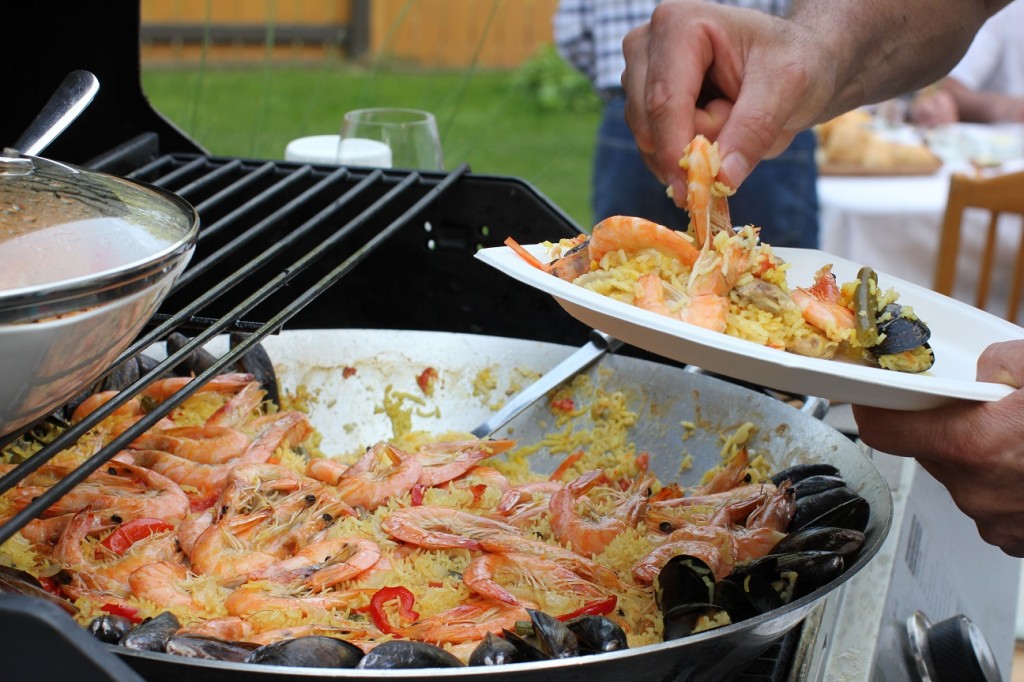 Spanish Paella for a Crowd

Before starting, prepare all your ingredients: 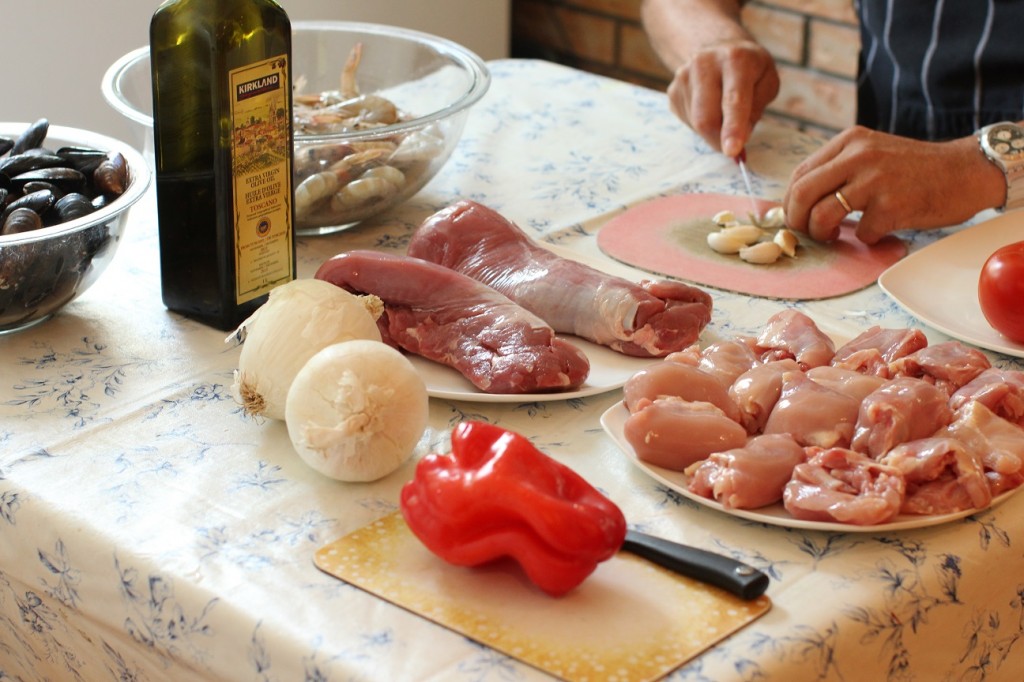 Cut small 'x' into the bottom of the tomatoes. Drop them into a pot of boiling water and leave them for 1 minute. Remove with a slotted spoon. Pull off the peels. Cut out the stem end. Cut the tomatoes in half crosswise and remove the seeds and juices with your fingers (discard that). Dice the tomato flesh into half inch cubes.

Remove the seeds and stems from the peppers. Cut the flesh into long thin strips.

Trim the beans and cut them into 2 or 3 inch lengths.

Rinse and drain the shrimp.

Clean the mussels, if they are not already cleaned. 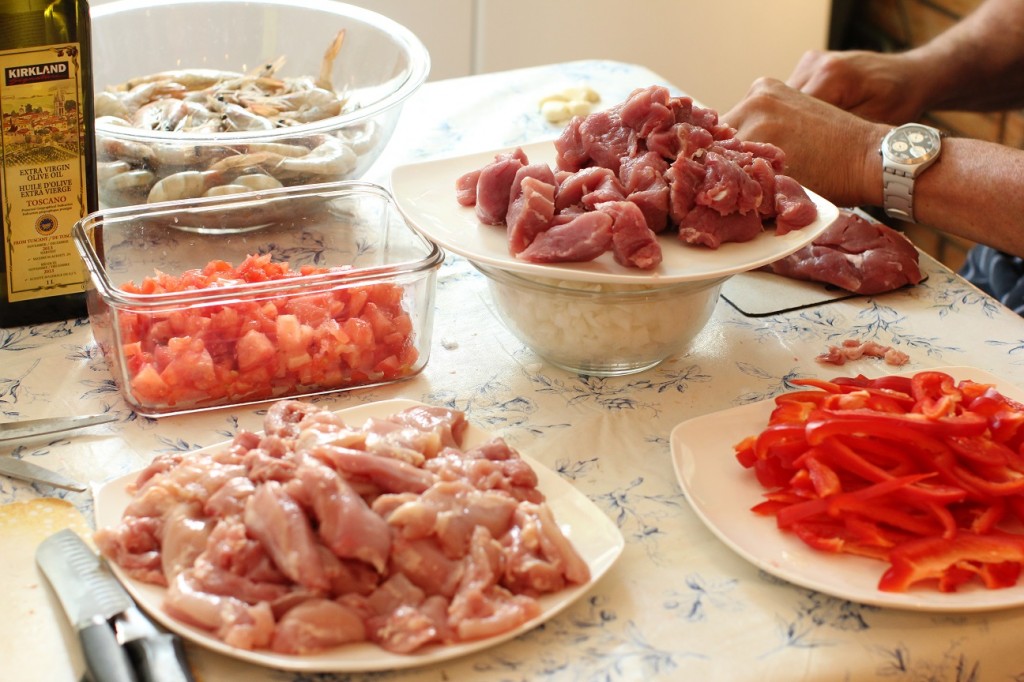 Bring the chicken broth to a boil, then remove from heat, add the saffron, and cover and keep warm.

Heat the barbecue to medium heat. Place a large paella pan onto the grill and pour in about ½ cup of oil. When the oil is shimmering, add the chopped onions and garlic. Salt to taste. 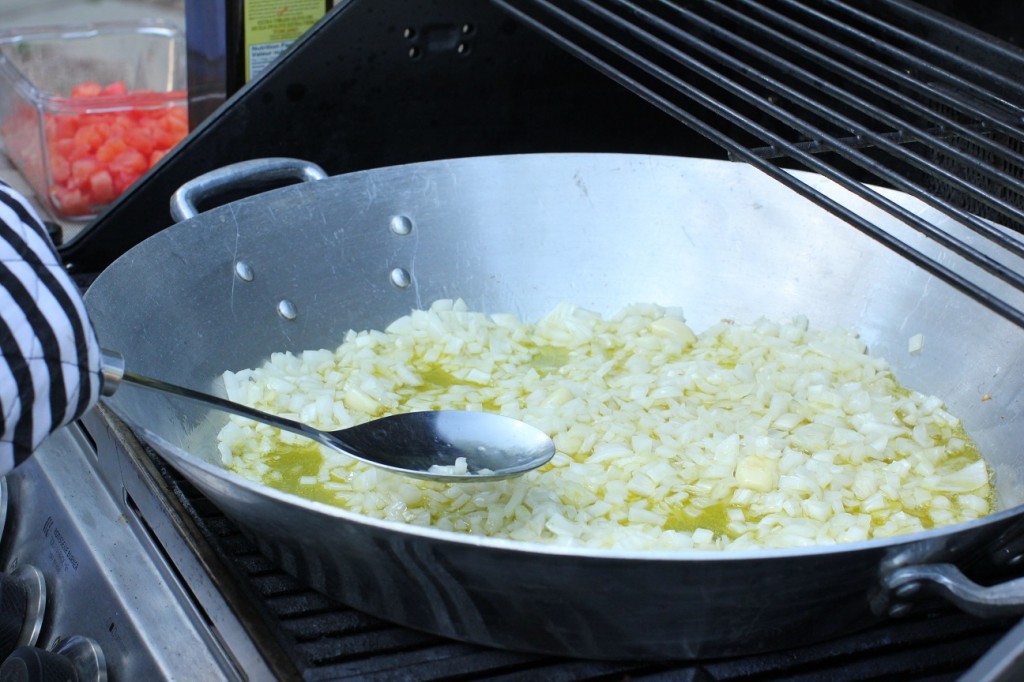 Cook until translucent, then with a spoon remove the cooked onions to a bowl and set aside. 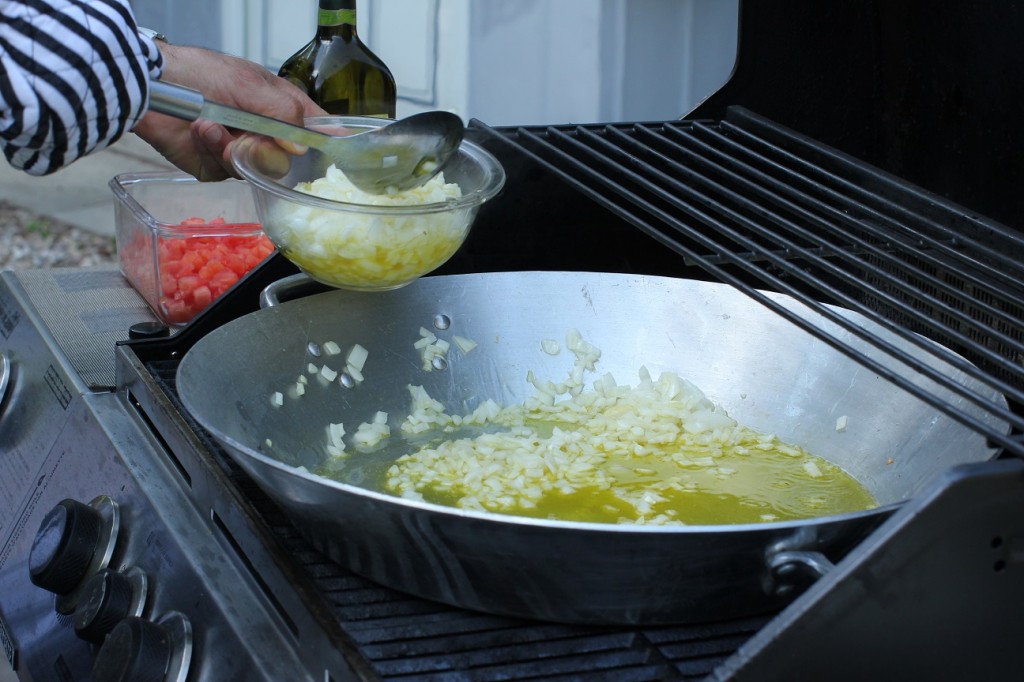 Add about another ½ cup oil. Then add in the chicken pieces. Sprinkle generously with salt. 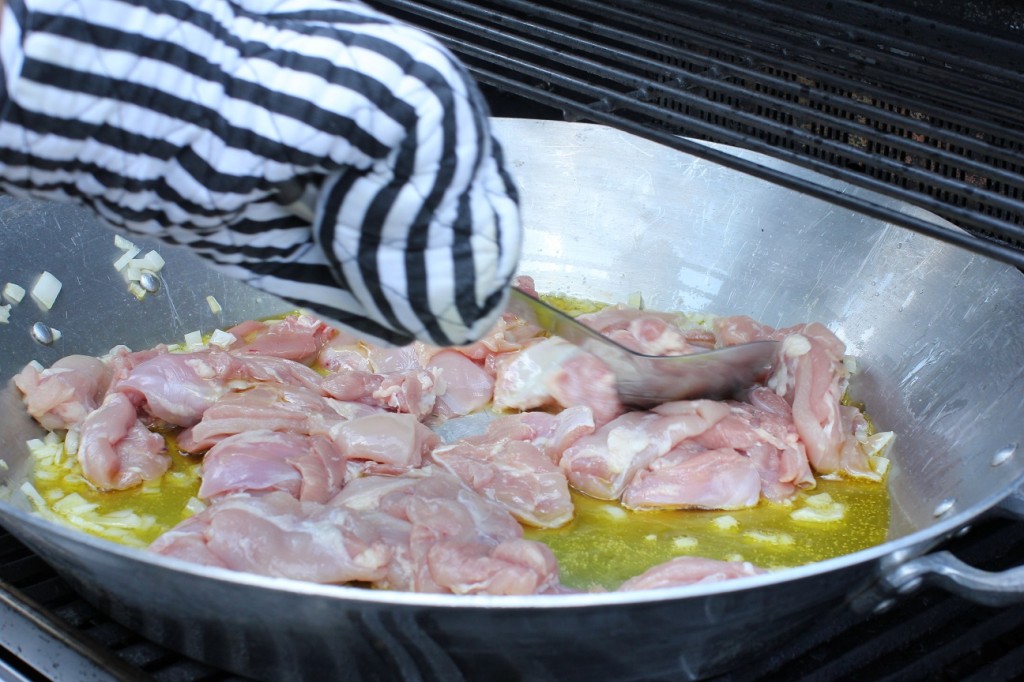 Cook until all surfaces of the meat have changed colour. The insides may still be pink, but will continue to cook when added to the rice later. Remove the chicken to a bowl and set aside.

Add another ½ cup of oil and the pork pieces. Sprinkle with salt. Cook until the outsides have changed colour and add to the bowl with the chicken pieces. 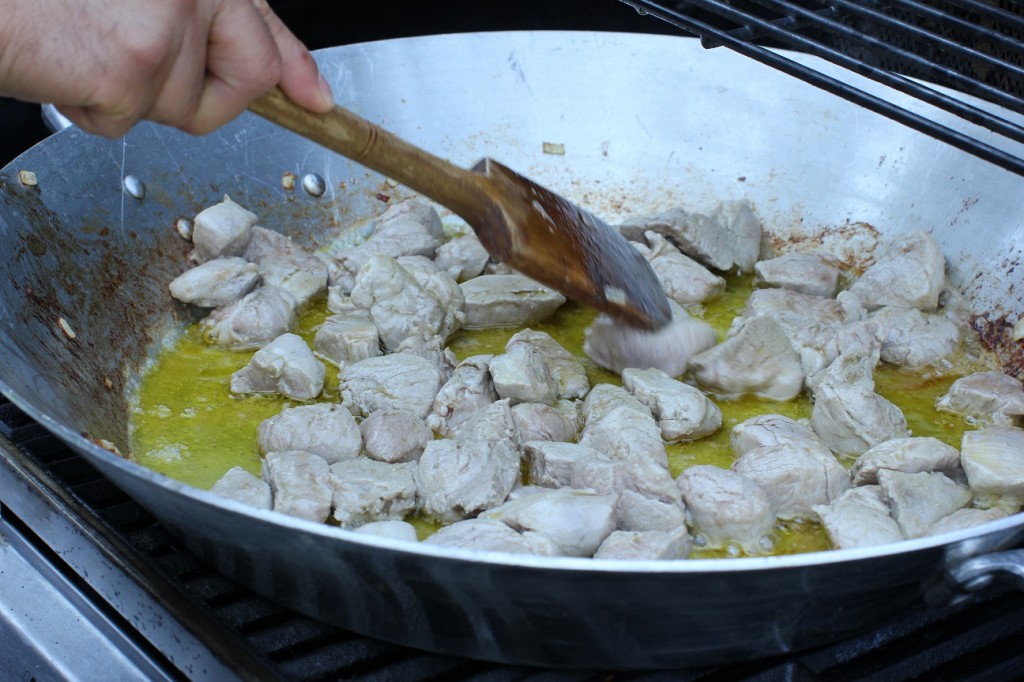 Add the last ½ cup of oil and the chopped tomatoes and peppers. Cook a few minutes, then add in the beans. Salt to taste. Remove about half of the sauteed pepper strips with tongs and set them aside in a small bowl. 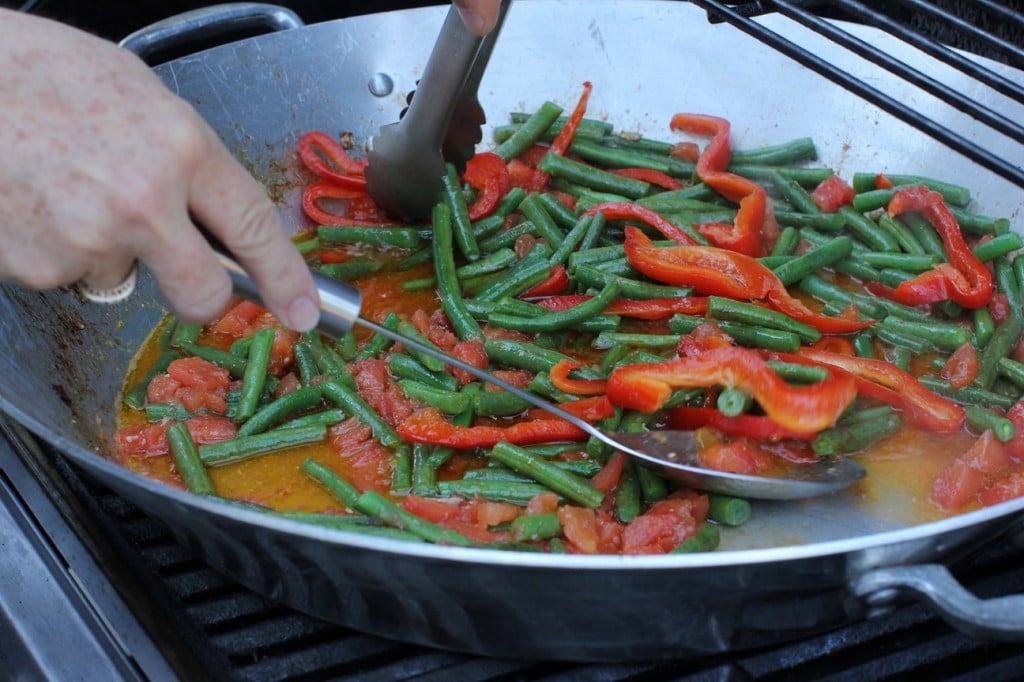 Now you start to add everything back in. First the cooked chicken and pork. Spread it evenly over the sauteed vegetables. Add any oil and juices accumulated in the bowl. 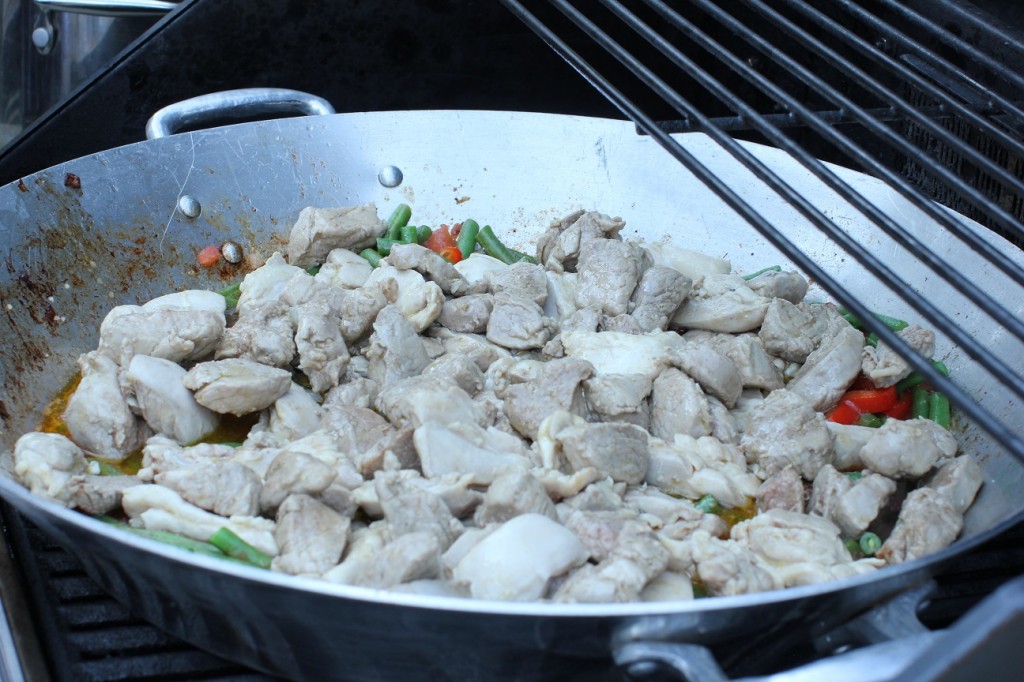 Then layer over the cooked onions and garlic 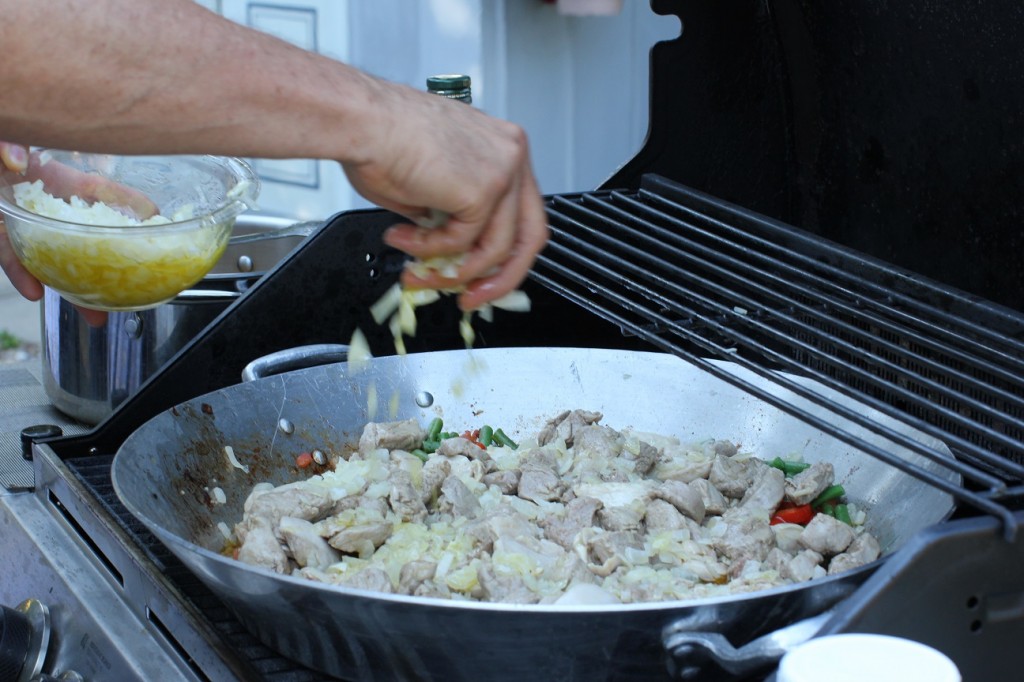 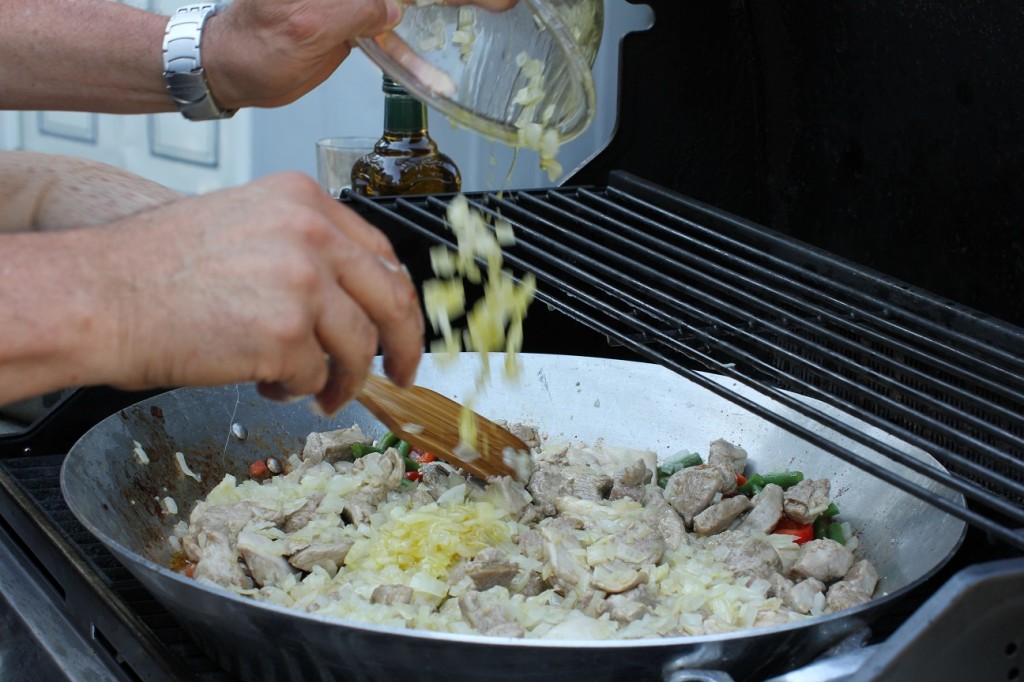 Pour in the rice - 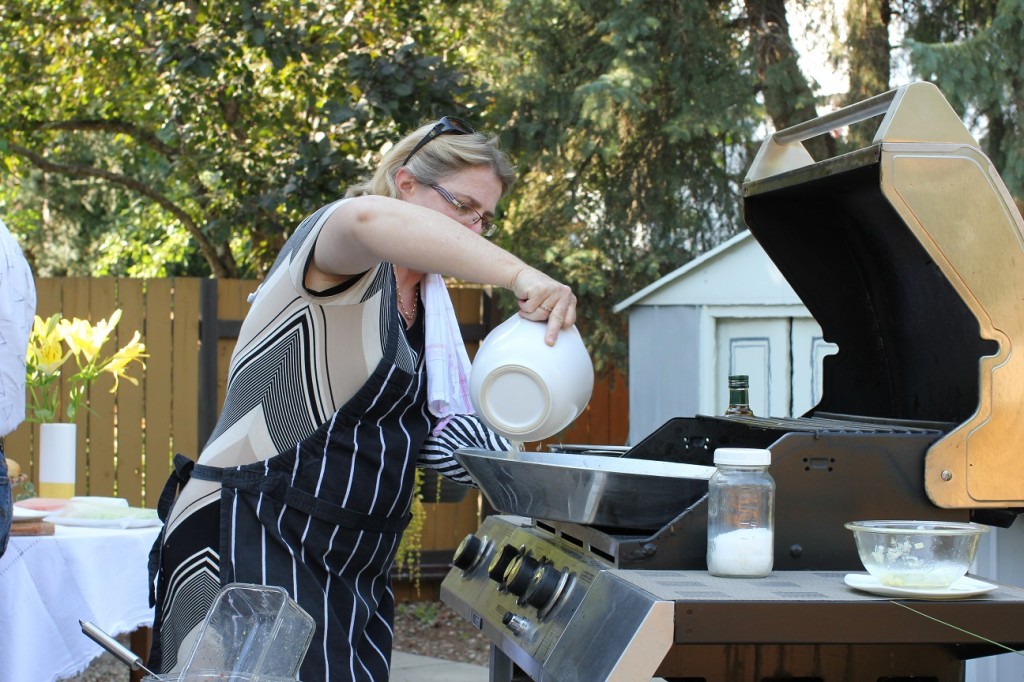 - and to be authentically Spanish, pour it in the shape of a cross. (Neither Christine nor Gilbert knew why it has to be done that way - just that it's the way it has always been done.) This is all about tradition. 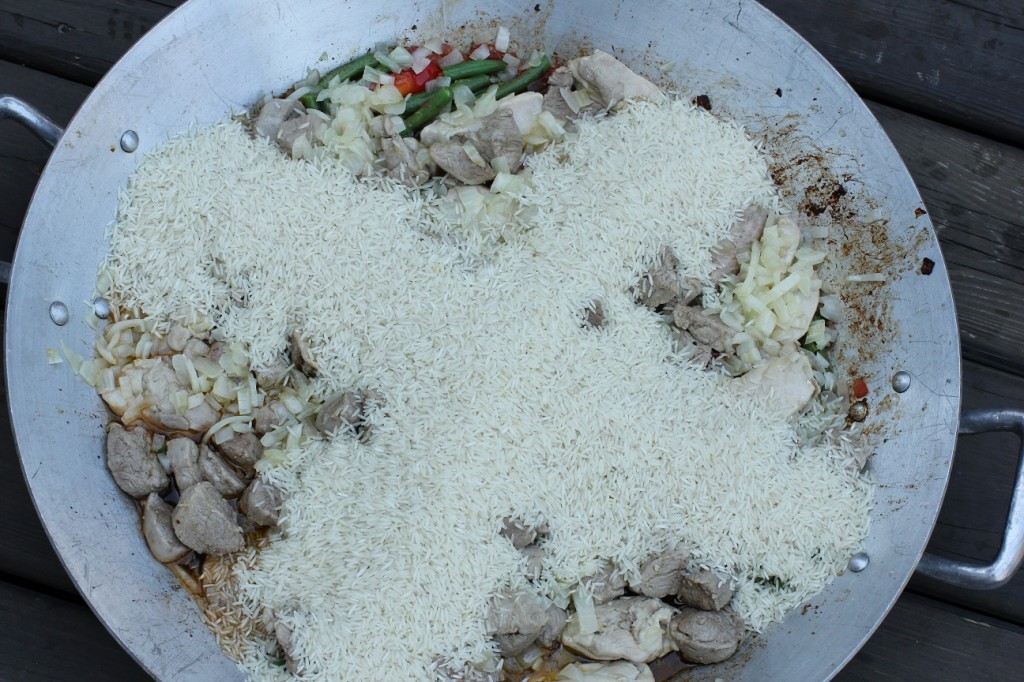 Then carefully pour in the hot saffron chicken broth, aiming for the spaces between the arms of the cross. (We removed the paella pan to the deck so I could take photos, but I recommend you leave it on the grill since it's cumbersome to move once the stock is added.) 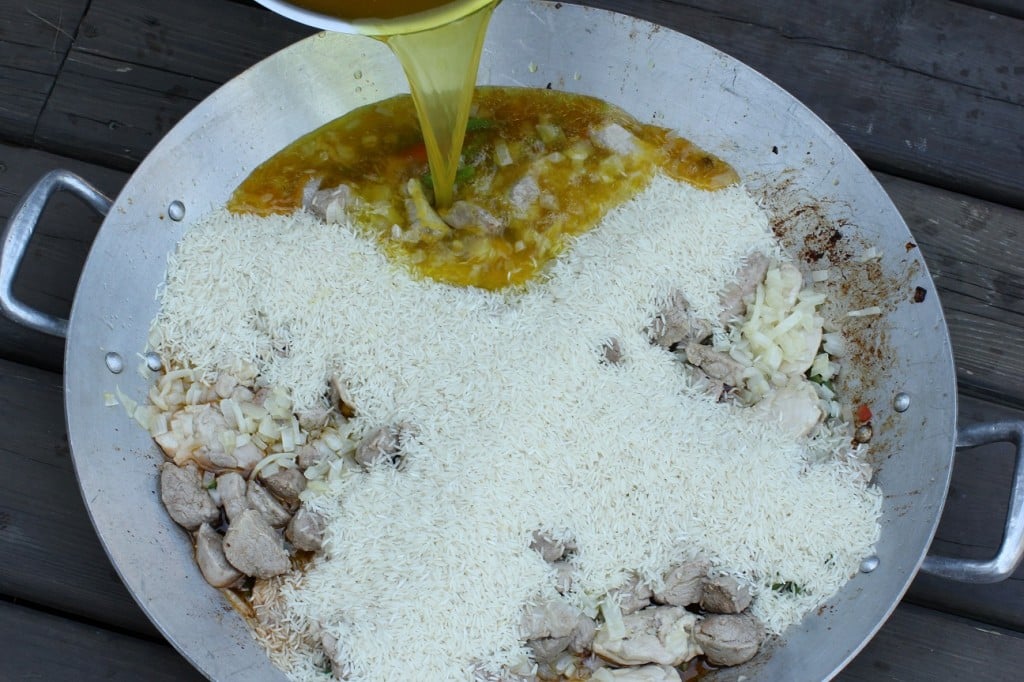 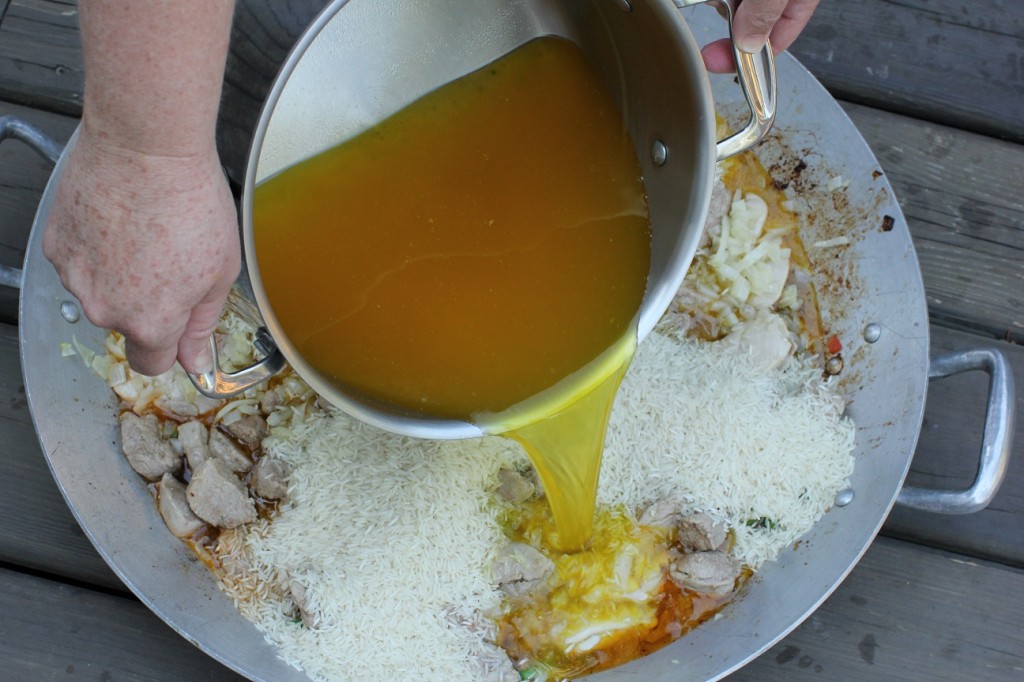 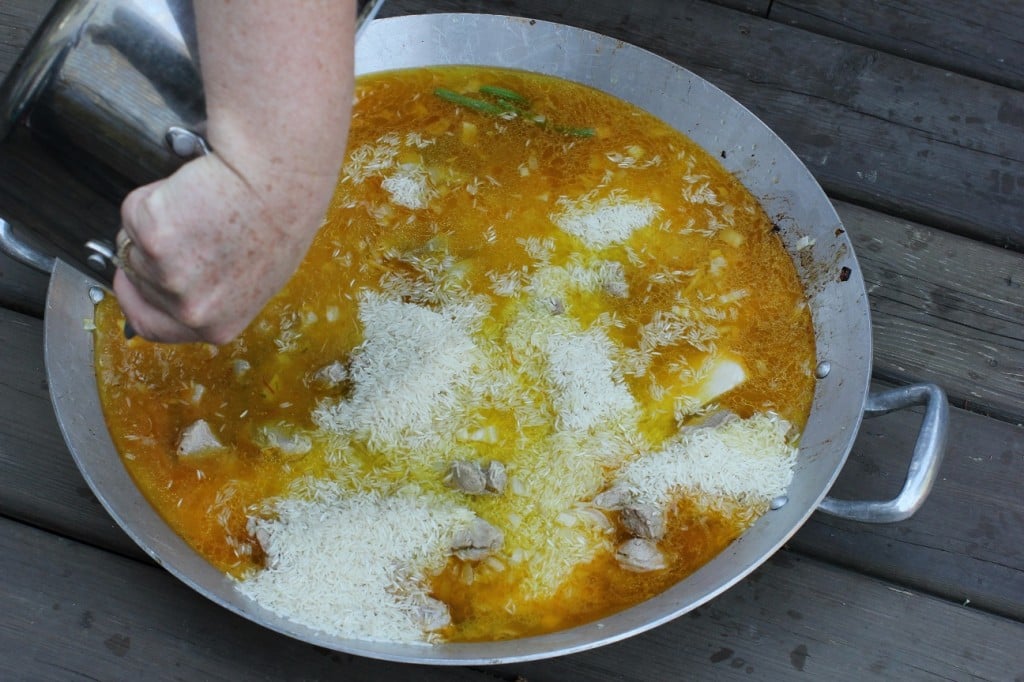 With the back of a spoon, gently tap any dry rice so it is all submerged below the broth. 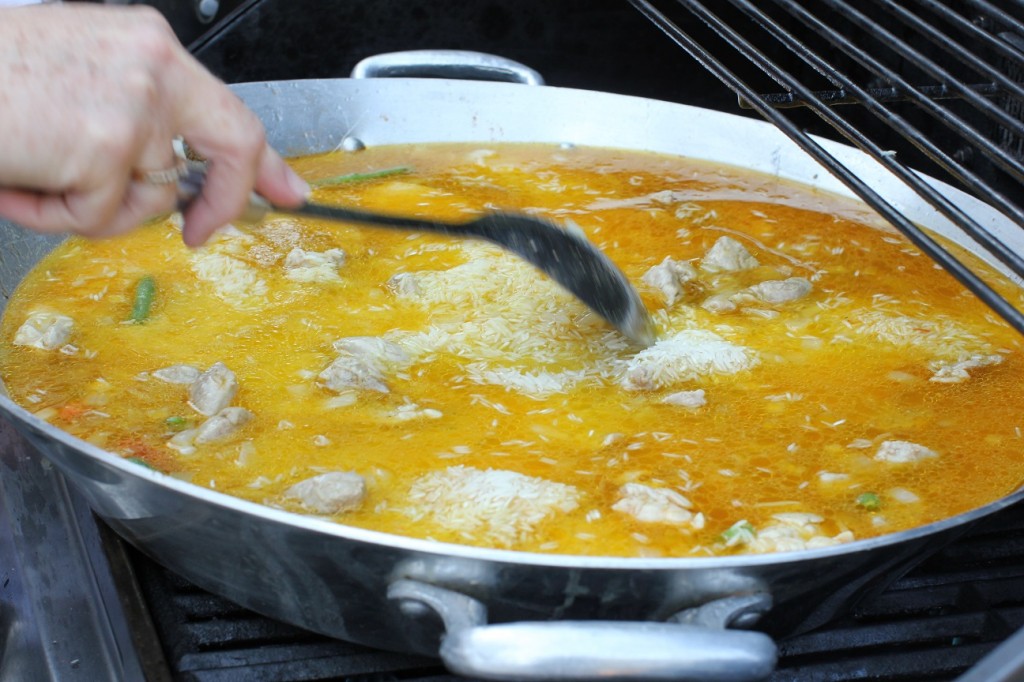 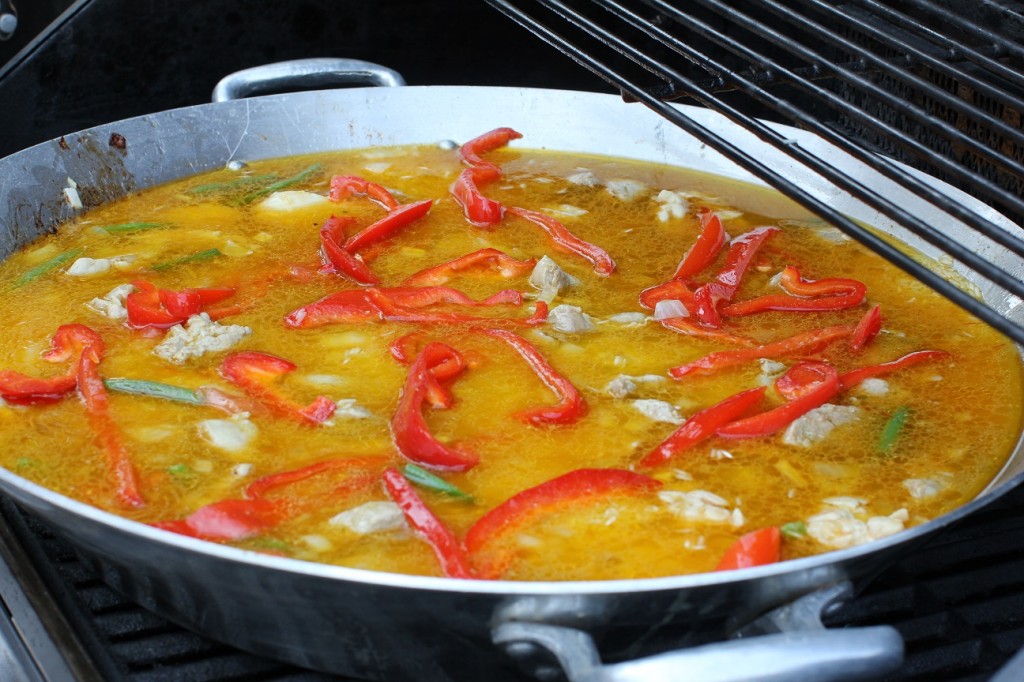 Traditionally, a light crust of rice is allowed to form on the bottom of the pan - the crunchy bits being considered the best part by some.

When the water is all absorbed by the rice, add the shrimp, spreading them in a single layer over the top of the paella. Tuck the mussels into the rice all the way around the edge of the pan, forming a 'crown'. 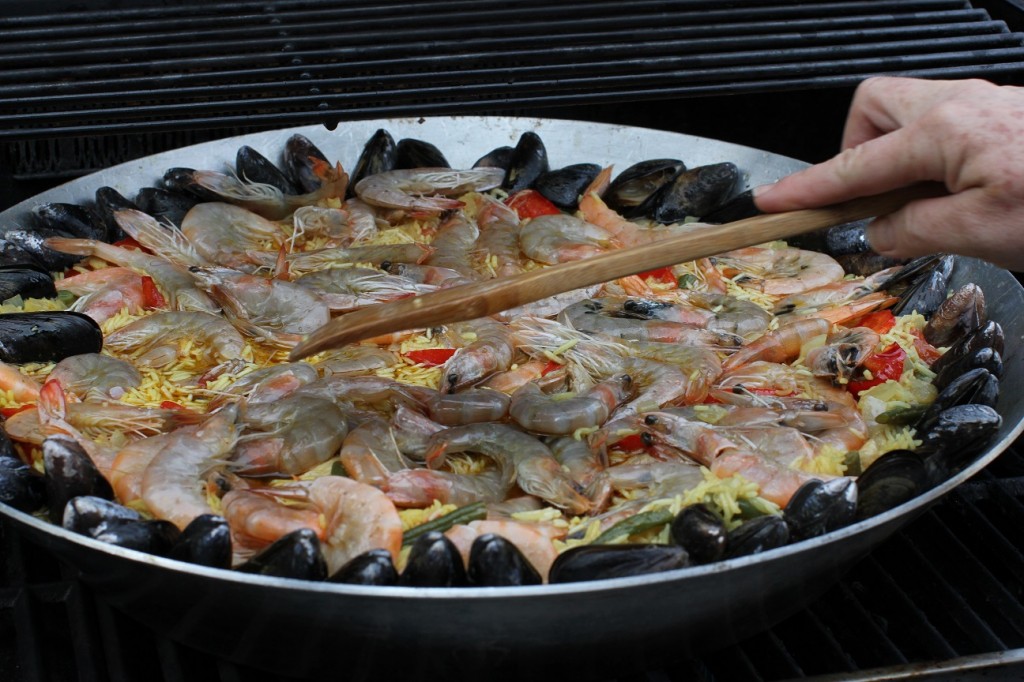 Cover the whole paella pan with several strips of parchment paper, and then a layer of foil sheets, crimping the edges around the pan to seal.

Have the guests assemble for the ceremonial uncovering of the paella to oohs and ahhhs as the mouthwatering aroma wafts out. 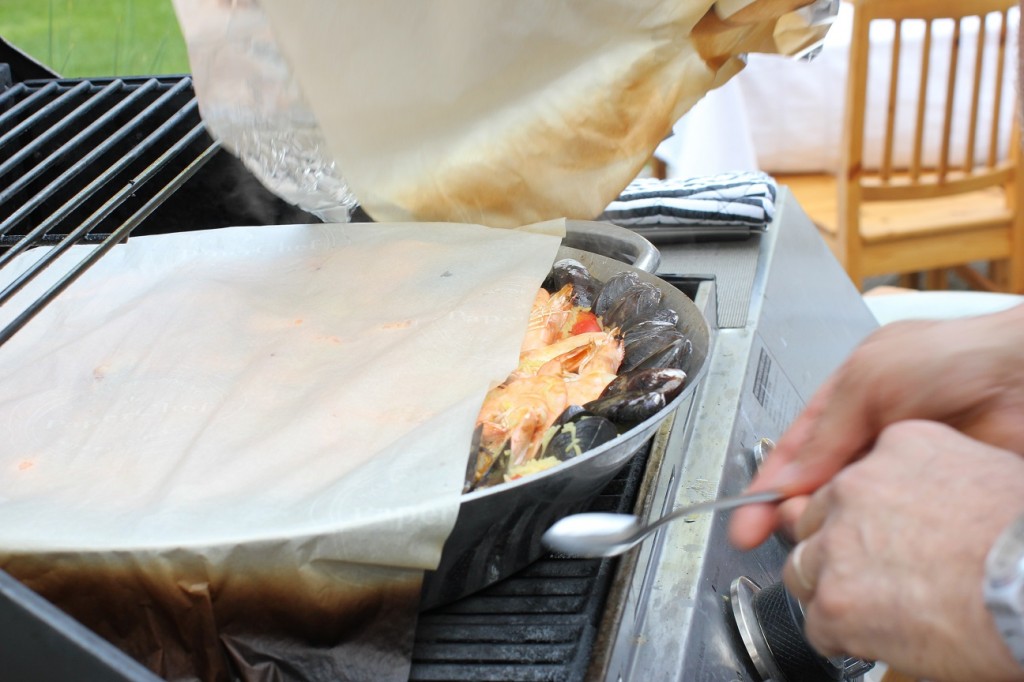 Serve guests, arranging a few shrimp and mussels on the top of each mound of paella. (Discard any mussels that didn't open.) 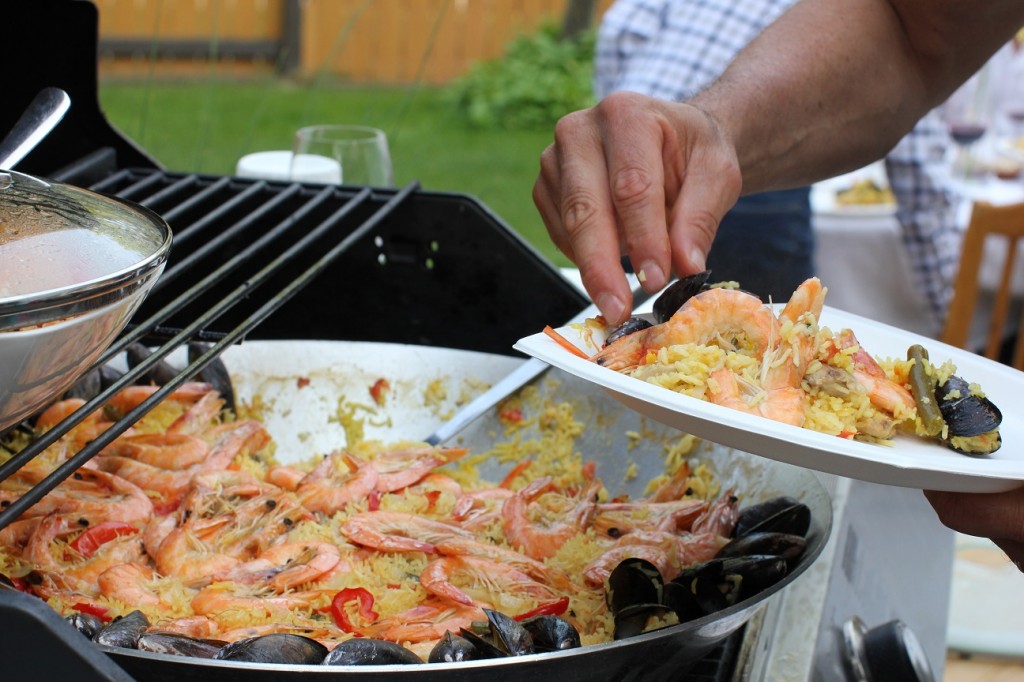 A Spanish cava (sparkling white champagne-type wine) or a fruity sangria would be a lovely accompaniment to your Paella Party.

Watermelon and Lime Ice (with a Tequila Option)