The zesty flavours of peppers, artichokes, and sun-dried tomatoes combine with spicy sausages in this Mediterranean Fried Rice. (Skip to recipe.) 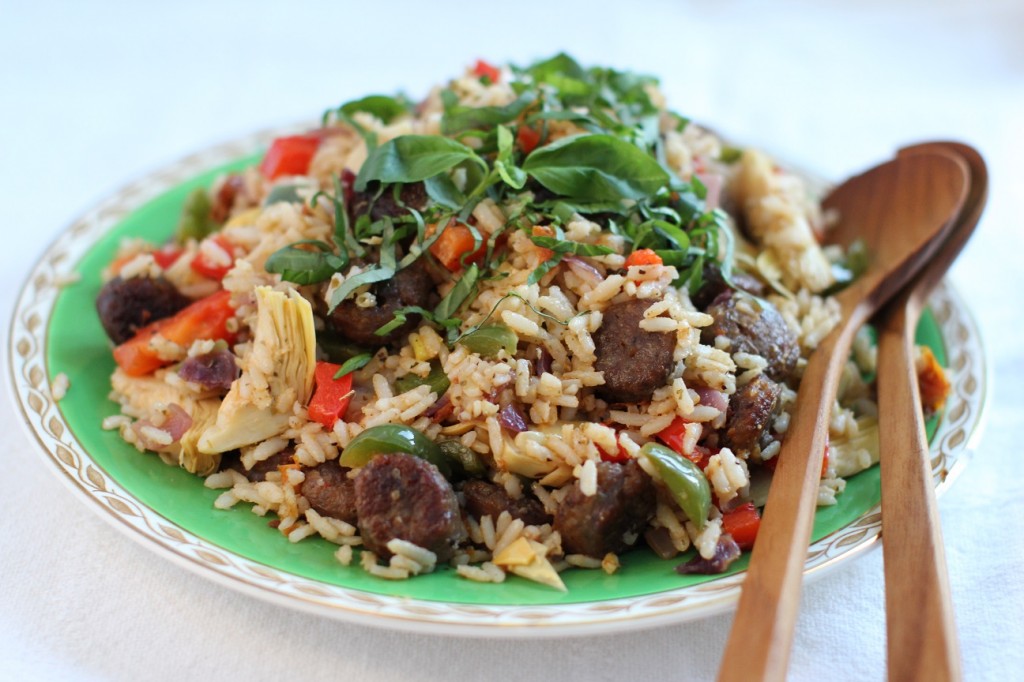 Mmmm. I love it when a pot of leftovers can be turned into a delicious meal that has the family fighting for the leftovers!

Last night's dinner was just that. I had a big bowl of leftover cooked brown rice (what was I thinking?) and most of the fixings for a Mediterranean-inspired dish staring at me from out of the fridge, so supper came together pretty quickly.

After observing the tussle over which of the two men (well, one man and one hungry teenager) would get the biggest share of the leftovers for their lunch the next day, I figured the dish had gone over well.

I made it first with four cups of the rice - it tasted great. I looked at the cooked rice still remaining in the bowl, and thought What the heck?, tossed it in with the dish, added a bit more seasoning, and the dish was still full of sunny Mediterranean flavour, so, just sayin', the rice amount is pretty flexible.

Now I know that the next time I make rice, I will plan to cook way more than I need, just so we can enjoy this Mediterranean Fried Rice again. (It's already been requested!)

Kitchen Frau Notes: To make this meal stretch to feed six, or to have enough leftovers for a couple lunches, increase the brown rice to 6 cups, and add an extra sprinkle of oregano, salt and pepper.

I always have a jar of artichoke hearts in the fridge. I can buy the 1.8 litre size of marinated, quartered artichokes at Superstore for $12, and they are so handy to add to all kinds of dishes and salads, serve alongside a selection of appetizers, or to eat straight out of the jar. If you can't get the big jars of marinated artichokes, just use the drained contents of one of the smaller-sized jars instead, or even use canned artichoke hearts.

You can also use the marinated artichoke hearts in this delicious Tuna and  Cannellini Bean Salad. 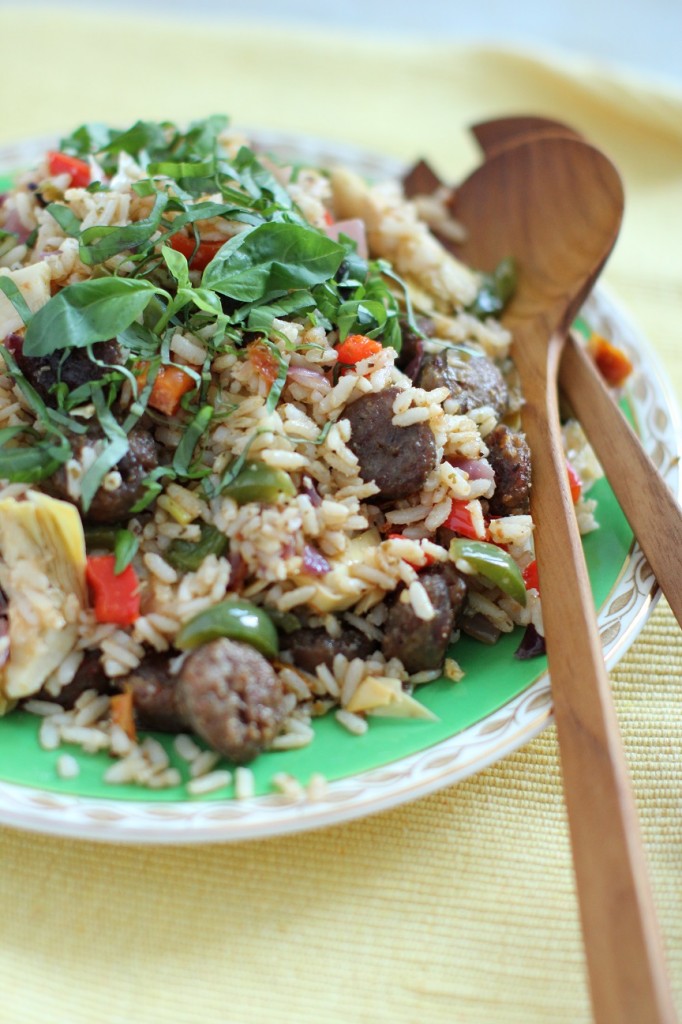 Cut the Italian sausages into half inch (1 cm) slices. 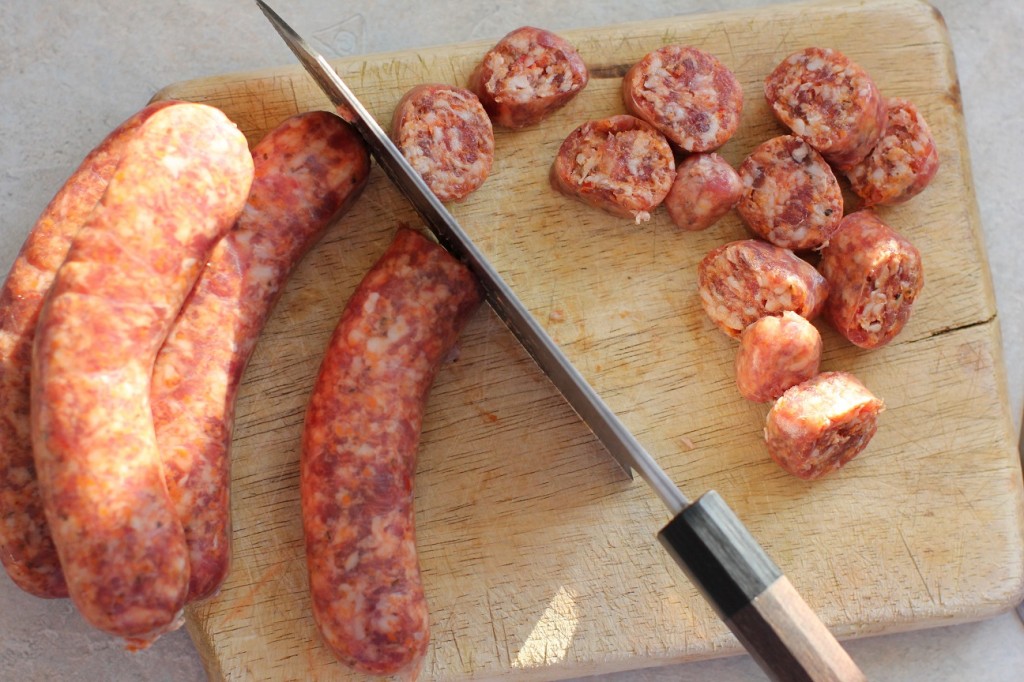 Saute the slices in a single layer in a large skillet. Turn the slices over after the bottom is browned, and saute until both sides are crispy and golden-brown. Remove the sausage slices to a paper-towel lined plate to drain. Discard the fat in the skillet.

While the sausages are browning, heat the olive oil in a separate skillet or Dutch oven. Dice the onion and both peppers into half-inch (1cm) dice. Add the salt and pepper. Saute over medium heat, stirring often, until the vegetables are soft, about 10 minutes.

Finely mince the garlic, and add to the vegetables along with the oregano. Saute for 2 more minutes.

Slice each artichoke quarter in half lengthwise. Roughly chop the sundried tomatoes if they are whole. Add the artichokes and tomatoes to the vegetables.

Add the sausage slices and cooked brown rice to the vegetables and toss  gently to mix.  Taste for seasoning and add a sprinkle more salt and pepper if needed. Heat over medium heat until the rice is heated through.

Remove to a serving dish.

Chiffonade the basil: Stack the basil leaves on top of each other. Roll into a tight cylinder and slice crosswise thinly. 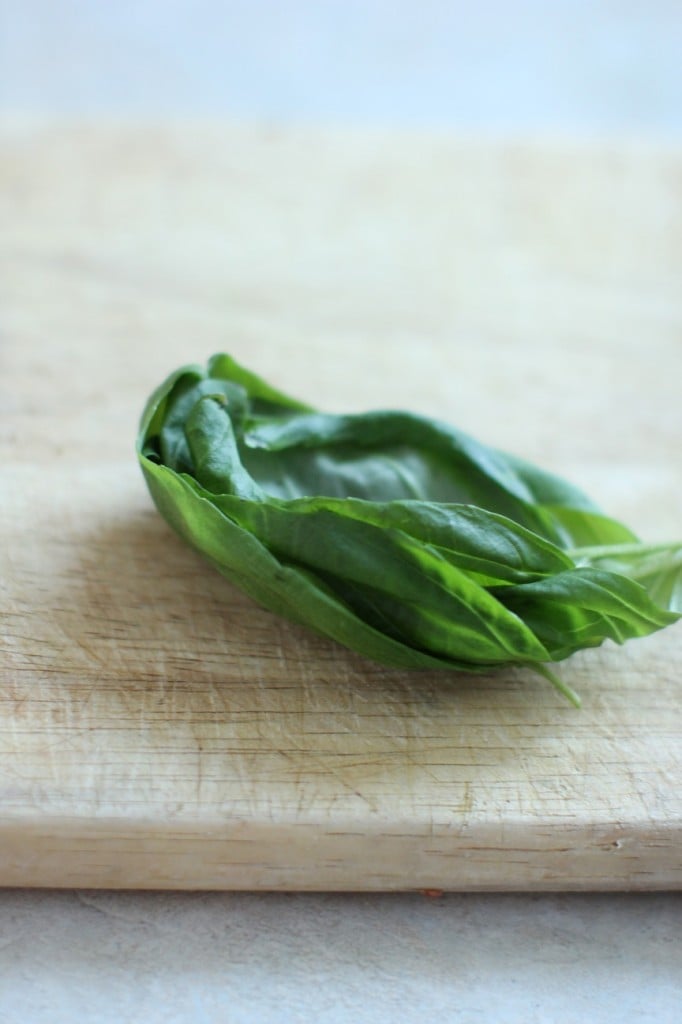 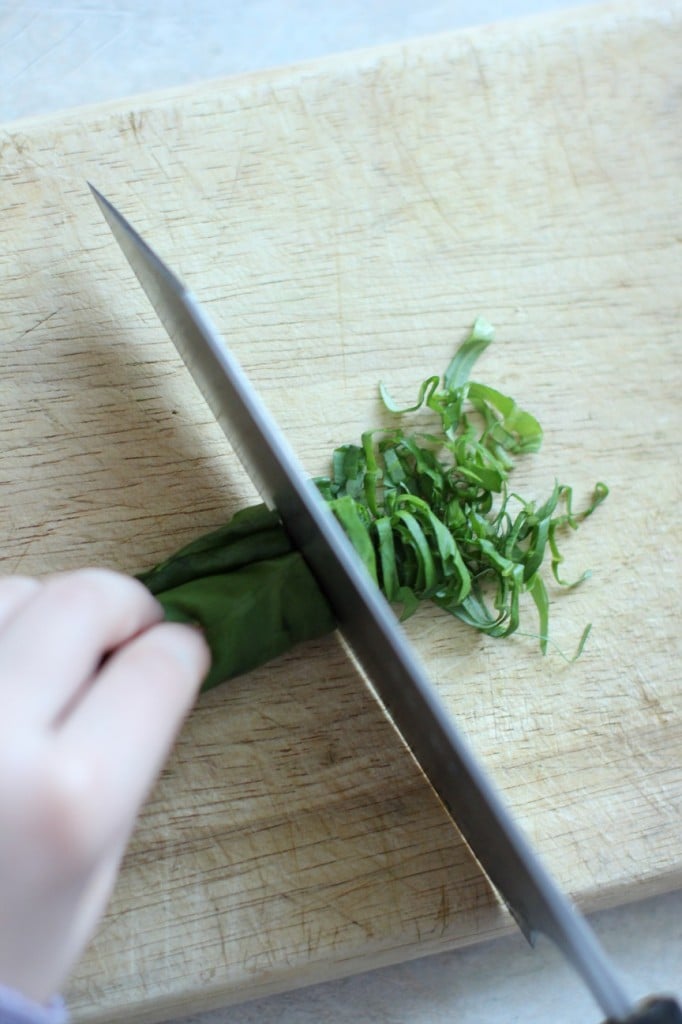 Scatter the basil chiffonade across the rice to make it pretty and green and add a burst of fresh flavour.