You can have dinner on the table in 10 minutes with this Creamy Pasta with Garlic, Asparagus and Beef, one dish meal. Quickest sauce method ever. (Skip to recipe.) 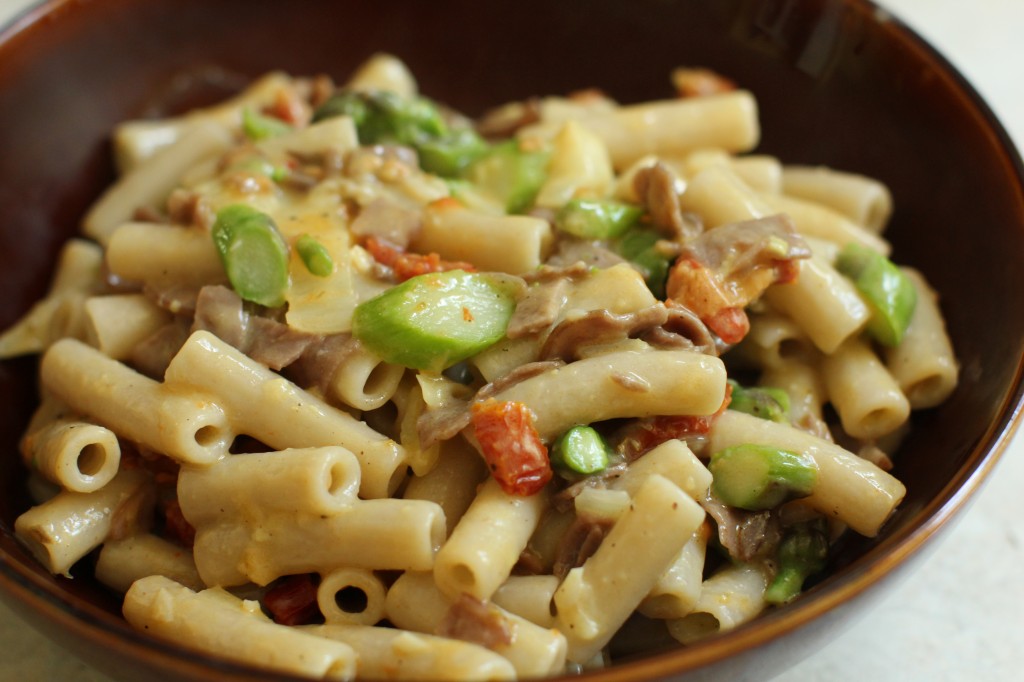 Tonight it was just Andreas and me home, and when I asked him what he wanted for supper, he answered Pasta, of course. Do you need to ask? You know that's what I always want.

That's what the kids always wanted when I gave them a choice. Pasta, pasta, pasta of any kind. Anything doughy and starchy. That category included spätzle and gnocchi and dumplings. Perogies came a close second, and so did pancakes. I think every cuisine has its own version of a carbohydrate comfort food.

So, I made the boy a big pot of pasta, and he was happy.

The sauce came together in the time it took to cook the noodles.  A quick look through the fridge and a few minutes in the pan, and the pasta was dressed with garlicky crisp-tender vegetables, morsels of meat and a flavourful, creamy 2-ingredient sauce. It's quite amazing how egg yolks and a bit of pasta water married together elevate themselves into such a smooth and glistening coating for the noodles. A light but creamy sauce with no cream or dairy.

We were eating dinner 10 minutes after we started, watching the news on the television of the flooding in Calgary with shock and disbelief. Unbelievable and heartbreaking.

I got one helping - Andreas got three. I think it filled him up. (In case it didn't, the big bowl of ice cream he had afterwards filled in the gaps.)

There wasn't much time for fiddling with fancy dishes or taking perfect pictures - the teenager was hovering at the feeding trough.

Kitchen Frau Notes: The ingredients for this dish came from rooting through my pantry and fridge and seeing what I could throw in the pot. If you don't have asparagus, add any other vegetable - peas, beans, mushrooms, diced peppers . . .

I used deli roast beef slices 'cause that's what I had. Any other deli meat would work, too - roast turkey, chicken, even salami. They are tasty and work so quickly in a dish like this because they are already cooked and flavoured. I had stopped buying deli meats because of all the bad stuff in them, but now there are some new natural ones I really like, that are made with no nitrates or chemical additives.  But any bits of leftover meat would work in this recipe, too.

I use gluten free pasta. You can use regular pasta, no problem, if that's what you have.

I always have a large jar (from Costco) of sun-dried tomatoes in oil in my fridge. They are already julienned and we pile them on sandwiches, into scrambled eggs, and just about anything else we can think of. If you don't have sun-dried tomatoes on hand, throw a handful of halved cherry tomatoes into the sauteed vegetables just before they are done, so the tomatoes just get warmed up. 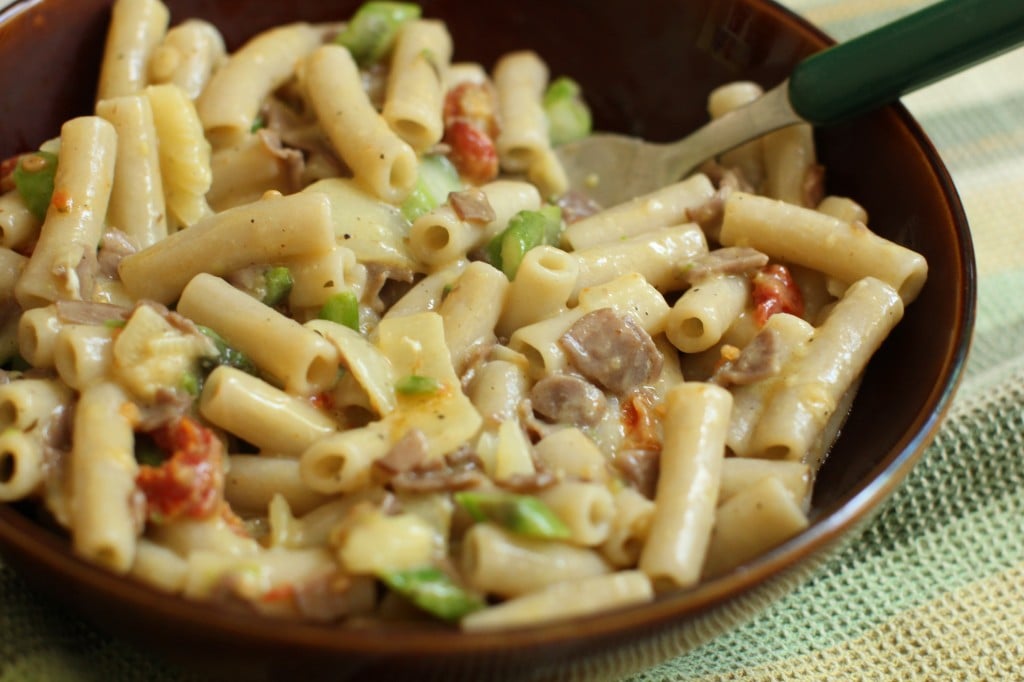 Pasta with Garlic, Asparagus and Beef

Bring a large pot of water to boil. Add 1 teaspoon salt and the pasta. Cook according to package directions, until just al dente - still a bit chewy, but with no hardness left.

While the pasta is boiling, set a heavy bottomed large saucepan on medium heat. Add the olive oil. Roughly chop the onion and thinly slice the garlic cloves. Cut the asparagus into diagonal slices. 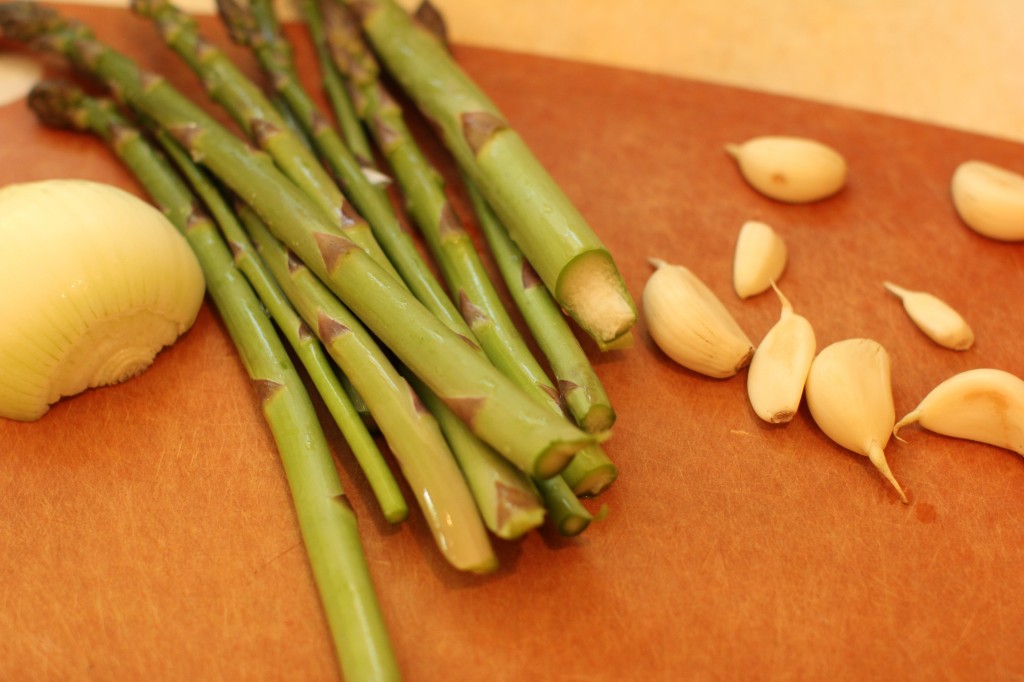 Add the vegetables to the hot oil and sauté, stirring often, until the onions are translucent and the asparagus is bright green.

Roughly chop the deli meat and add it to the vegetables. 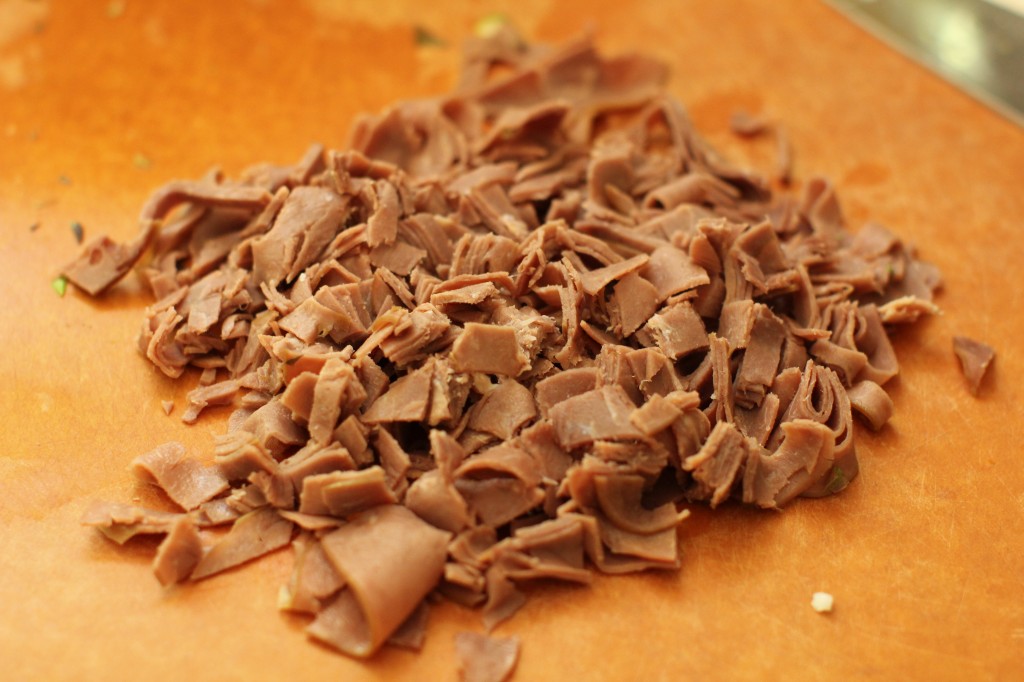 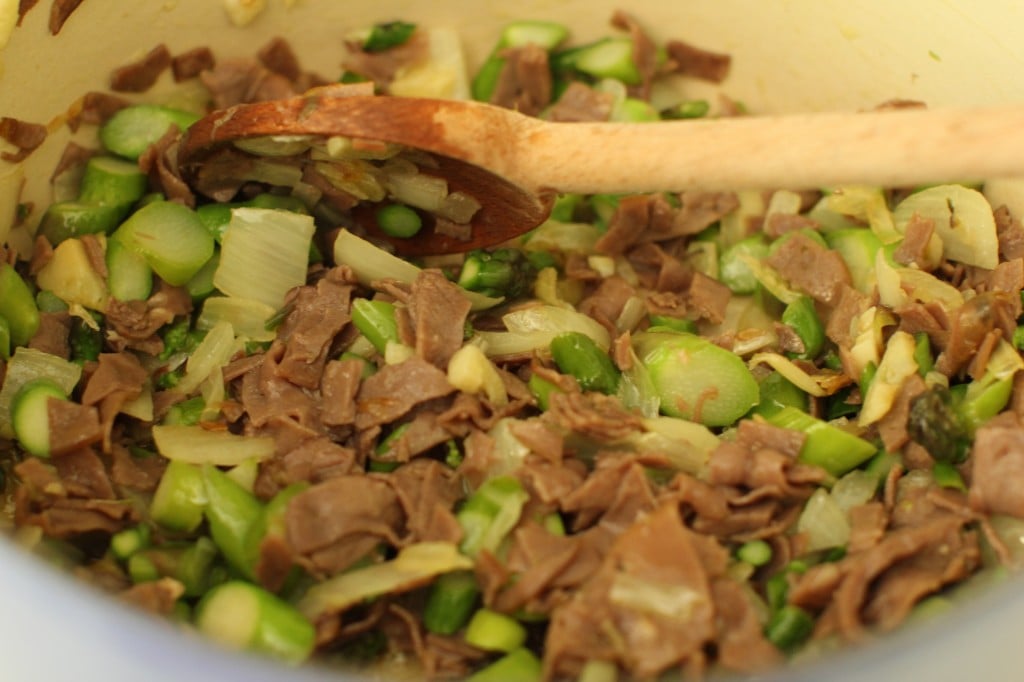 When the pasta is finished cooking (taste a noodle to test it) remove 1 cup/240ml of the cooking water and set it aside. Strain the pasta through a colander and dump it into the sauteed vegetables and beef in the saucepan. 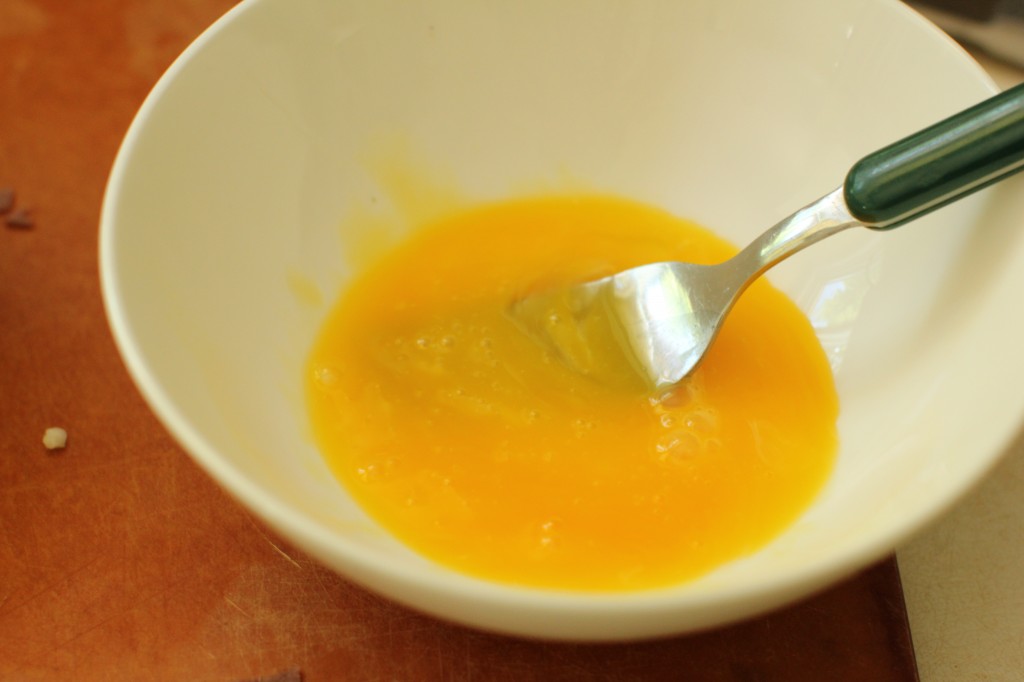 In a bowl, beat the egg yolks with a fork or a whisk, then pour in a tablespoon or two of the reserved hot pasta water, beating all the time. Gradually pour in a bit more and a bit more, beating constantly, until all the pasta water is mixed in. This will prevent the yolks from instantly cooking and curdling as they hit the hot pasta, and will make the sauce creamy and smooth.

Add some more freshly ground pepper to serve, pile it into bowls and enjoy.