Switch it up and use the meat to make the crust in this fantastic Meatzza Pizza - you'll impress all the meat lovers out there - and maybe start a new pizza revolution! It's loaded with all the tradtional pizza flavours, and naturally gluten-free to boot. (Skip to recipe.) 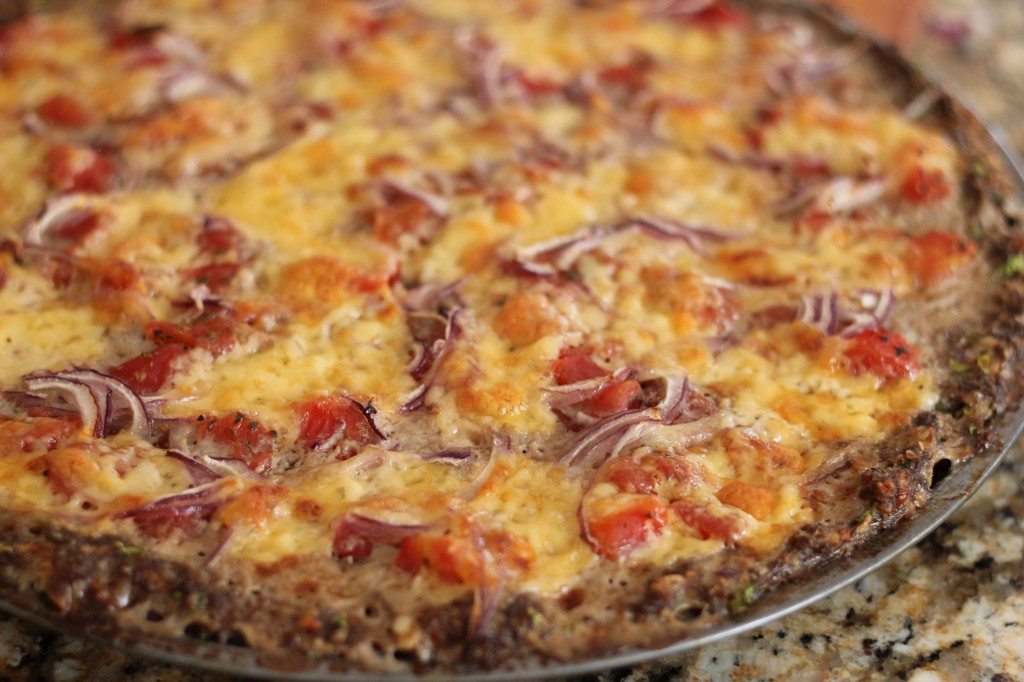 Life's like that. Just when you are least expecting it - a curveball.

Or a snap, crackle and pop - which is what happened to my knee this week. We were on our annual ski trip to beautiful Sun Peaks, British Columbia and I was so excited . . . most of our family able to make it, good friends to join us, coolers full of delicious food prepared, great weather and snow reports, our rooms right on the hill, and new ski boots to break in. What could be better? 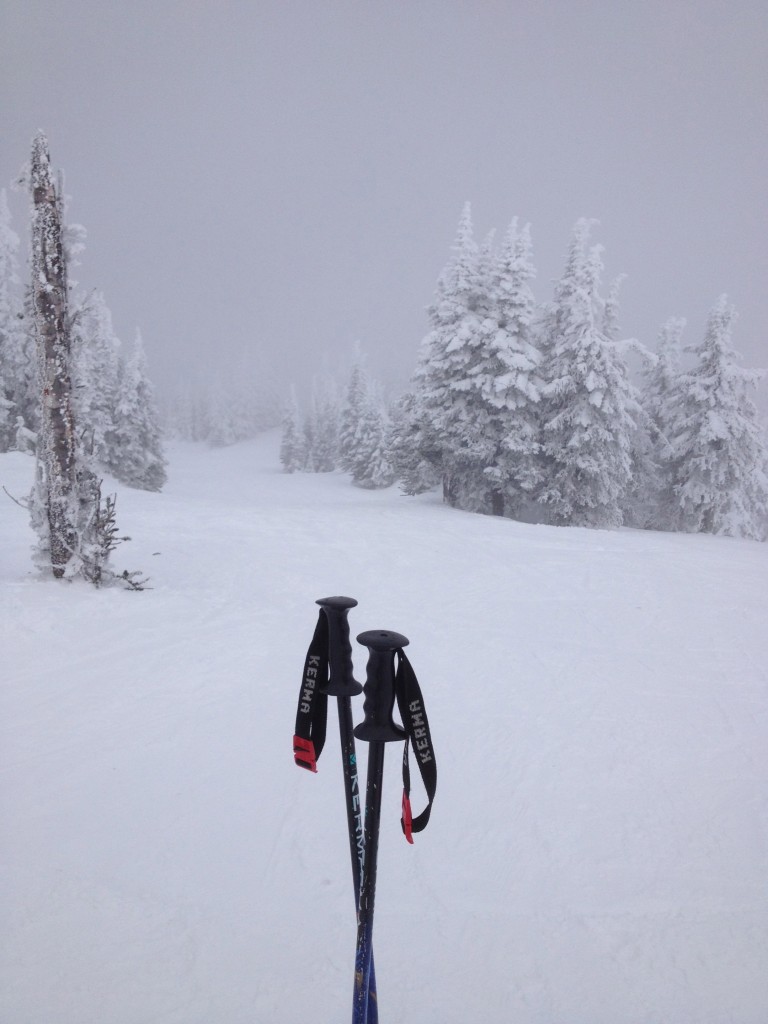 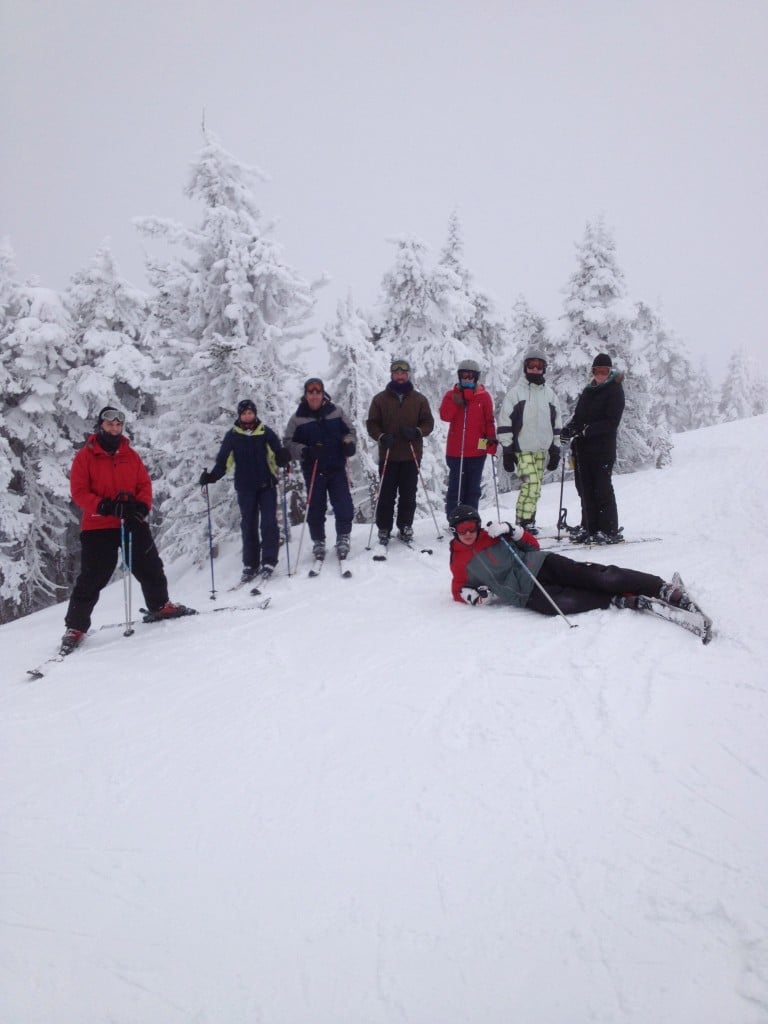 Umm . . . maybe . . . not taking a stupid tumble on the second run of our first day there (that's when I heard the snap in my knee, as I was doing a gloriously ungraceful head-over-heel cartwheel ending in a less-than-elegant face-plant in the snow). 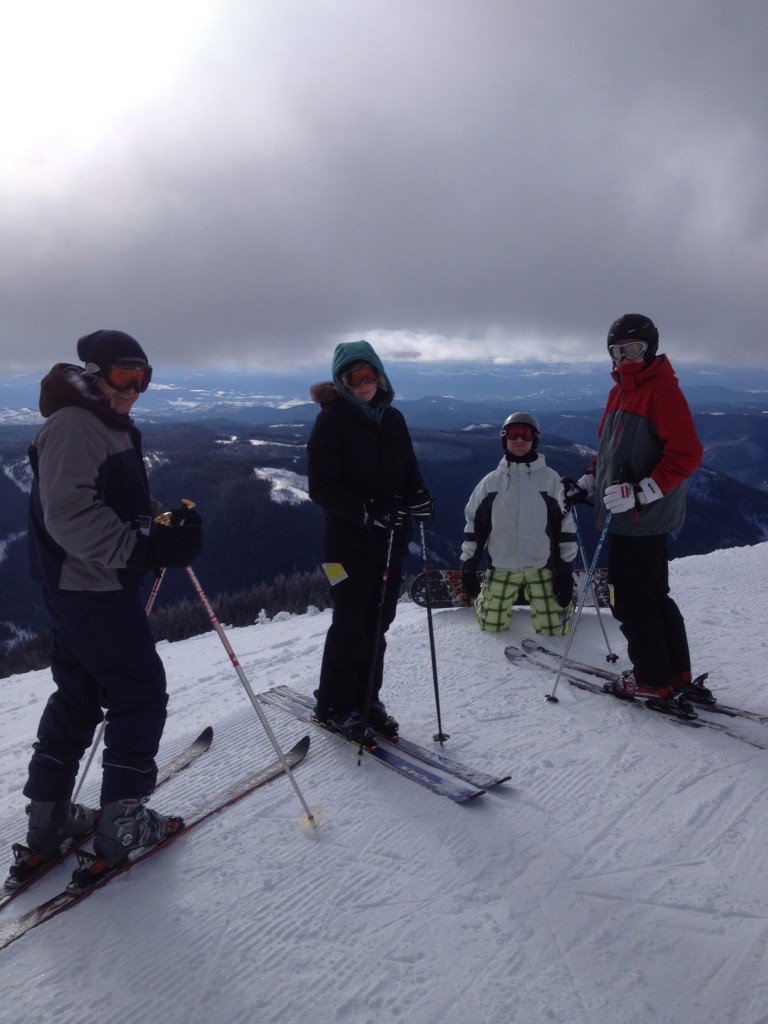 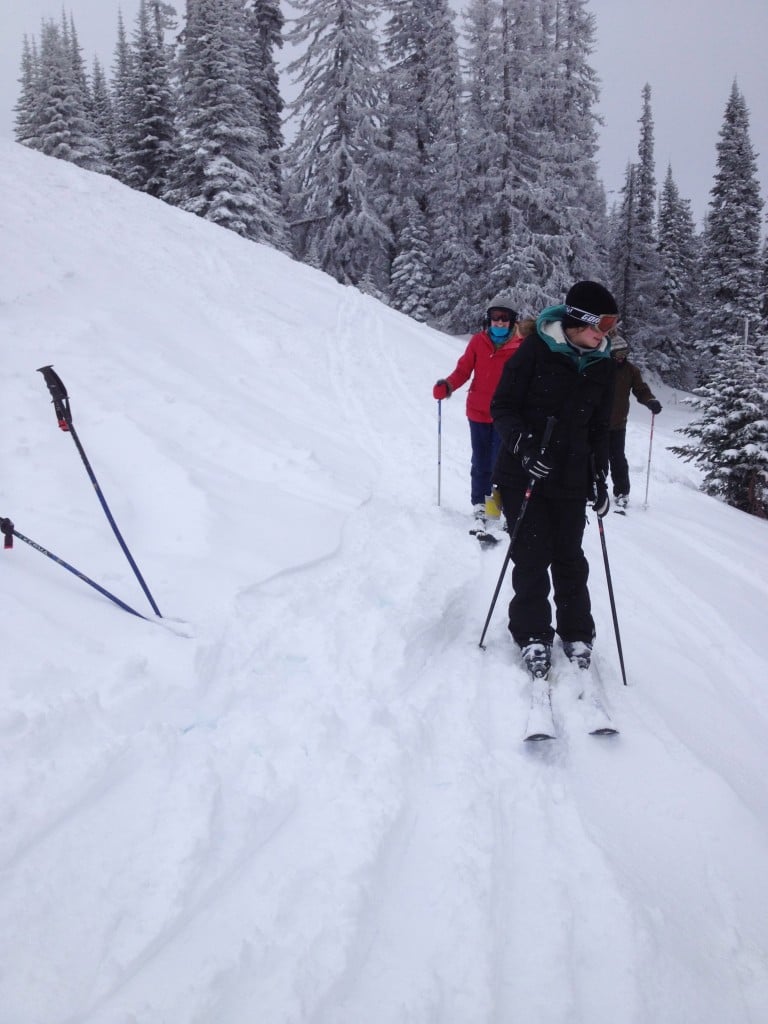 So, as a result, I sat in our rooms for three days, icing and elevating my knee, staring longingly out at the hill and the skiers whizzing by the window, while the rest of our group had wonderful days of sunshine on the mountains, like last year's trip. 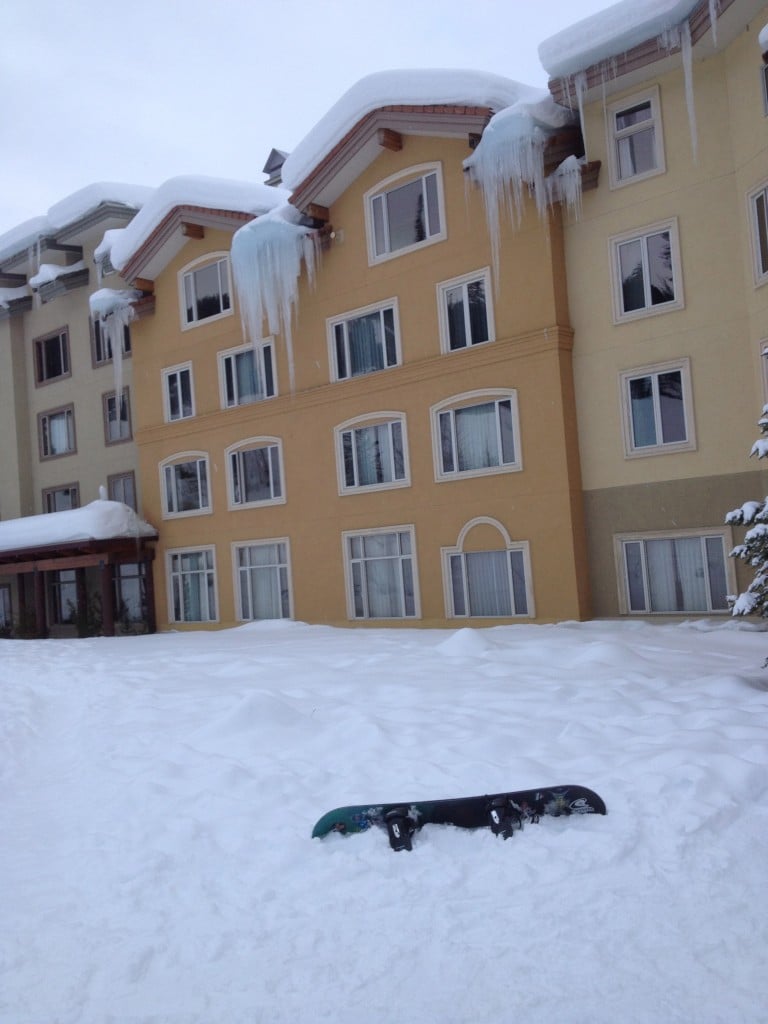 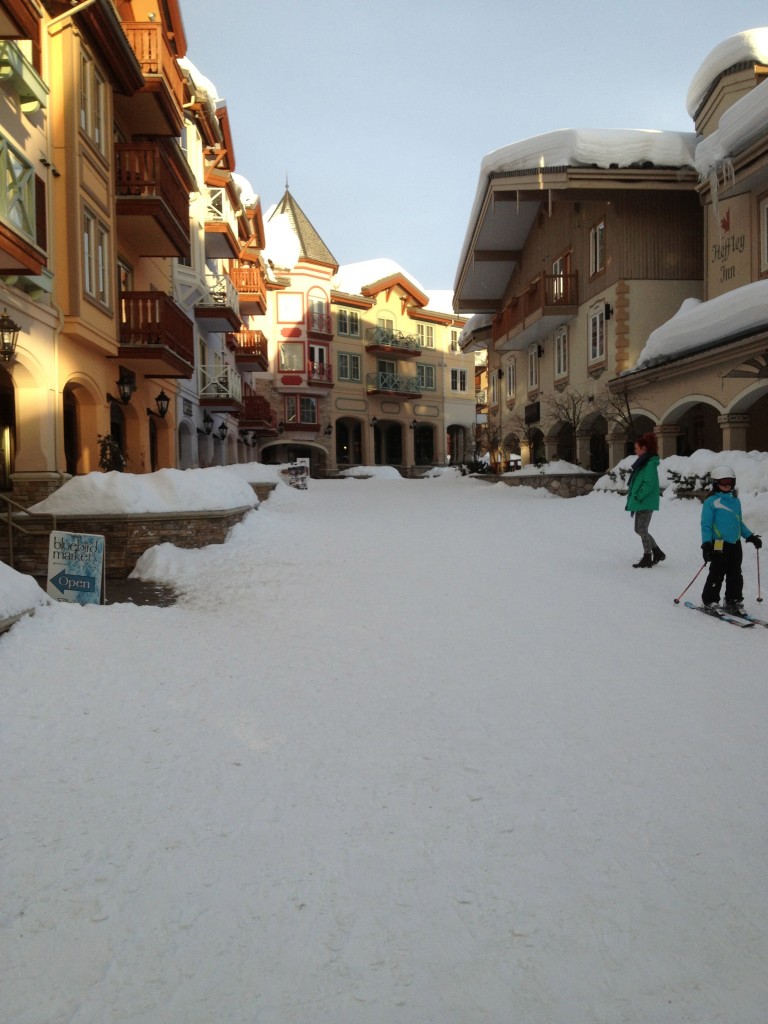 My dependence on absolutely inane daytime TV was thankfully broken when my thoughtful husband drove into Kamloops and returned with Nigella Lawson's brand new cookbook, Nigellissima, to keep me occupied. Oh, that glorious food and those mouthwatering pictures, and Nigella's captivating writing! I turned off the television and devoured her cookbook from cover to cover - even stopped feeling my knee for good blocks of time. (Now I know why my kids were so quiet for hours when they were little and had a new toy to play with.) I didn't do any whining while I was intently absorbed in my new toy! I was too busy earmarking recipes I wanted to try when I returned home.

So yesterday, back home and still hobbling around, I made the first recipe on my list; one  one for us, and one for my son to take to his friend's house. Nigella writes that her Meatzza is the most popular and often-requested recipe in her new book, and I can certainly see why. How is it that I've never heard of this before? And how simple and clever - make a pizza using meat as the crust. Wow! 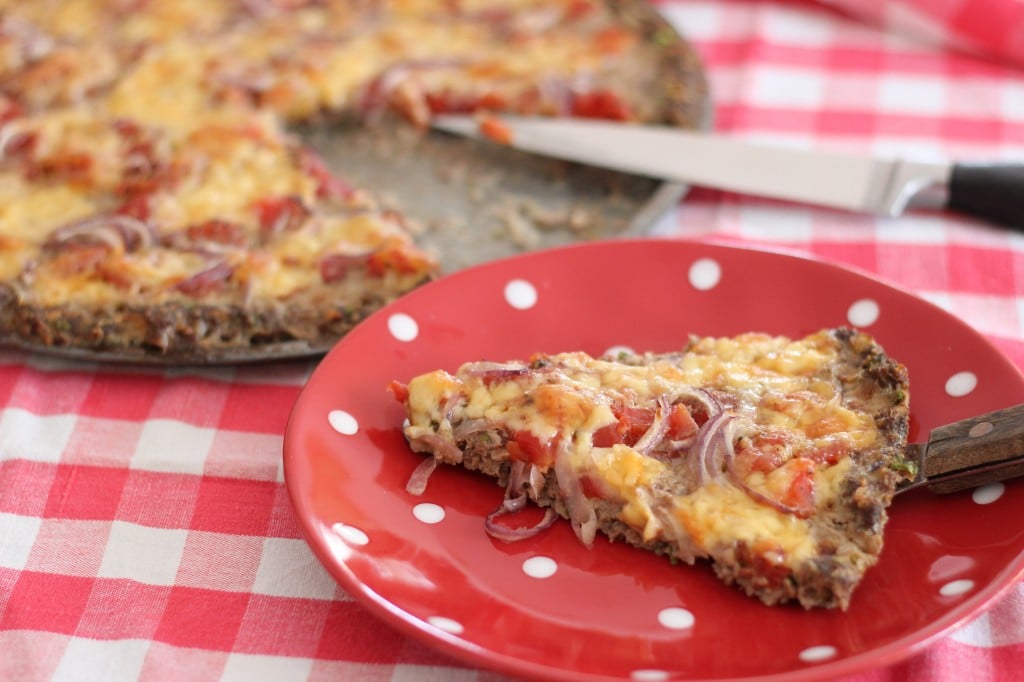 This Meatzza pizza was quick to whip up and so mouth-poppingly tasty. It will definitely be a new standby in this household. The flavorful meatball mixture serves as a crust and is topped with a simple canned tomato topping with cheese melted on top. Nigella used mozarella - I used Havarti. I added a few more ingredients to the crust to stretch it to fit the 12-inch/30 cm. pans common here in Canada. I also added onions - because you can't have pizza without onions, but really you could add any toppings you wished. And if you want more lazy and more simple, you could just use any bottled pasta sauce instead of the tomatoes in the recipe, and I'm guessing this Meatzza Pizza would still elicit 'wows' from your fans.

So thanks to Nigella Lawson and my unfortunate little mishap on the ski hill, here's a recipe I urge you to try.

Kitchen Frau Notes: Nigella uses mozarella cheese, but I only had Havarti in the house and it was so tasty, I think that is what I will use again next time I make this.

Make sure you use gluten-free oats if you need to make this recipe gluten free.

White or red onions are fine, but I always choose the red if I want the dish to look pretty - might as well go for colour, and they are slightly milder.

Kitchen Frau Tip #1: Celery leaves are a flavourful substitute for fresh parsley. So when buying a bunch of fresh celery, I always look for one with as much leafy top as I can find - the leaves stay fresh for much longer than parsley in the fridge, and are a quick way to brighten the flavour of many dishes. Just pinch the leaves off the stalks and chop them.

Kitchen Frau Tip #2: Whenever I use lean ground beef or extra lean ground beef, I add 1 tablespoon oil to replace moisture that comes from the fat in regular ground beef - a much healthier way to get moist beef, without having to drain off all the fat and liquid, which you wouldn't want to deal with on a flat pizza pan.

Kitchen Frau Tip #3: For the most flavourful punch from your black pepper, always use freshly ground. But every pepper mill grinds a different amount with each turn. To make it easy to measure, do a trial run: Grind the pepper onto a sheet of wax paper that has been folded and flattened. Pour the ground pepper, using the crease as a spout, into a measuring spoon, until you fill the spoon. Count how many 'grinds' it takes to make one teaspoonful of pepper. For instance, my pepper mill takes 32 grinds to make 1 teaspoon of pepper, so I know I need 8 grinds for a ¼ teaspoon or 16 grinds for a ½ teaspoon. Once you've measured, you won't have to do it again. 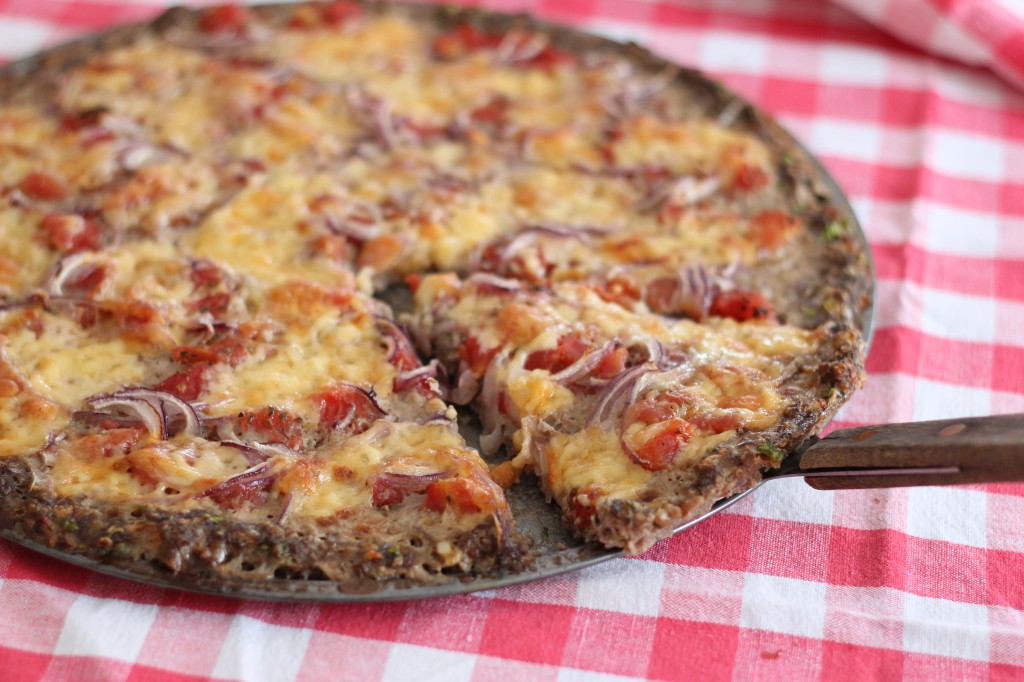 Enpty the contents of the can of diced tomatoes into a strainer and let drain while you get the rest of the ingredients ready.

Pour a generous drizzle of olive oil into a circular 11 or 12 inch/30cm pizza pan. Spread it around with your fingers to grease the pan.

Finely chop ¼ of the onion, then go over it with a knife a few more times to mince it well. You should have about ¼ cup. 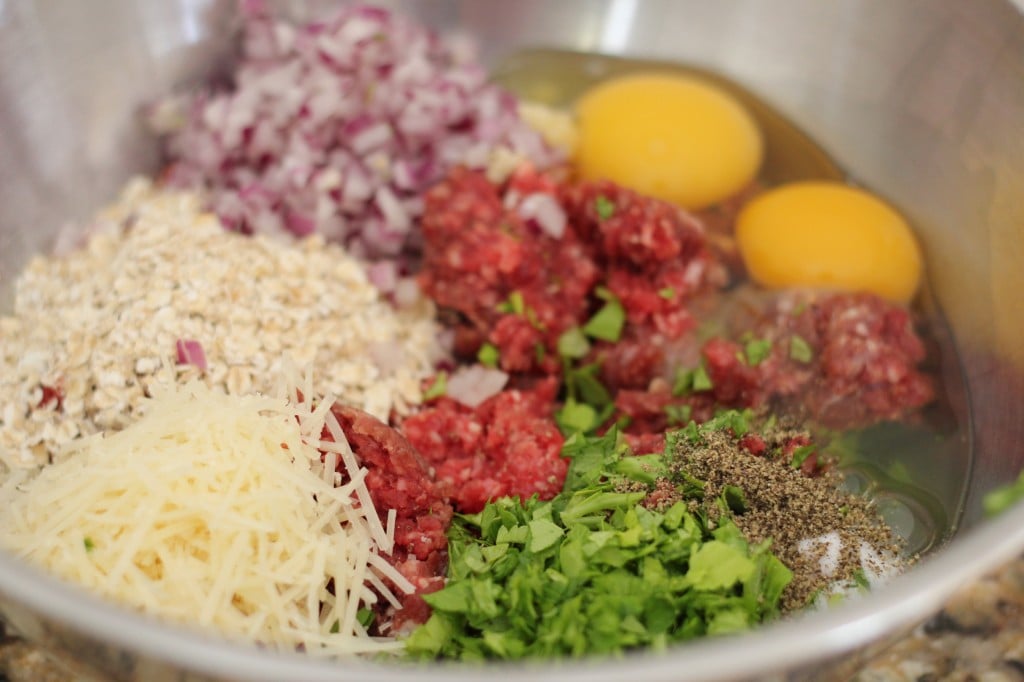 In a large bowl, combine the ground beef, 1 tablespoon olive oil, parmesan cheese, oatmeal, chopped celery leaves, the ¼ cup minced onion, salt and pepper. Finely mince the garlic clove, or grate it on a microplane grater, or put it through a garlic press, and add it to the bowl. With your hands, lightly combine the mixture just until incorporated and the eggs are well mixed in. Pat it lightly into the oiled pizza pan, making a slightly raised lip around the edge of the pan. 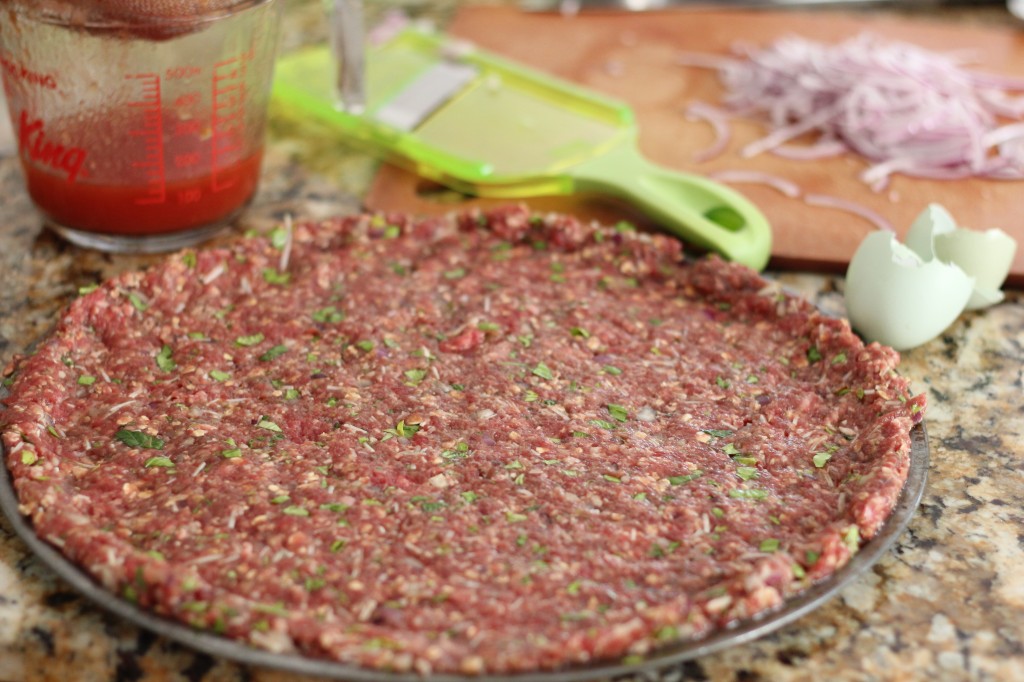 Give the draining tomatoes a few shakes in the sieve to get as much liquid out as possible. Save the tomato liquid for another use.

In a small bowl, combine the drained tomatoes with the dried oregano and basil. Spread the mixture as evenly over the meat 'crust' as you can. Don't worry, it won't cover it completely.

Slice the remaining quarter of the red onion very finely, using a mandoline if you have one, or dice it finely (if you want it less noticeable for picky palates). Sprinkle these over the tomatoes on the pizza.

Slice the cheese and lay the pieces evenly over the onions. 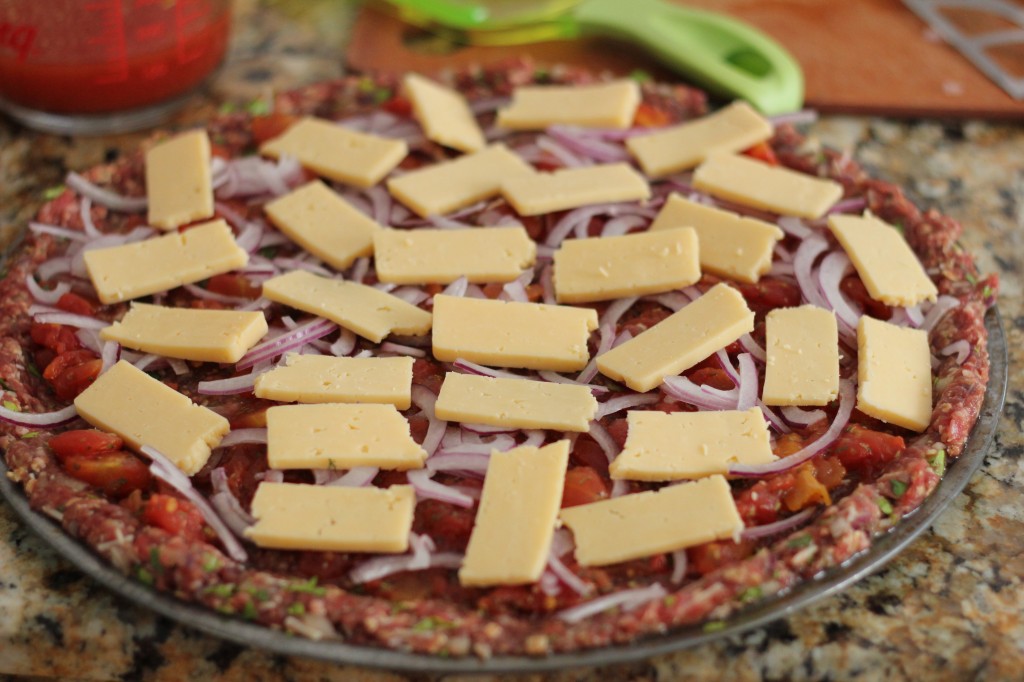 Bake at 425°F for 20 to 25 minutes, or until the cheese is nicely bubbling and starting to brown a bit in spots. By then the meat will be cooked through.

Slice like a pizza, and lift carefully from the pan with a pie-shaped server. Best served hot.

If you have teenagers in the house, you will have to fight them for a taste for yourself - I speak from experience.

Sunshine on the Mountains

all ski pictures courtesy of Elsa Geier - thanks Elsa and Nickie!