Tuna and Cannellini Bean Salad and Northern Gardening in the Spring

A zesty bean salad stuffed with good things like tuna, red pepper and artichoke hearts makes a great salad-as-a-meal and is easy to make ahead for picnics, potlucks, and packed lunches, so you can get outside and spend time in the garden! 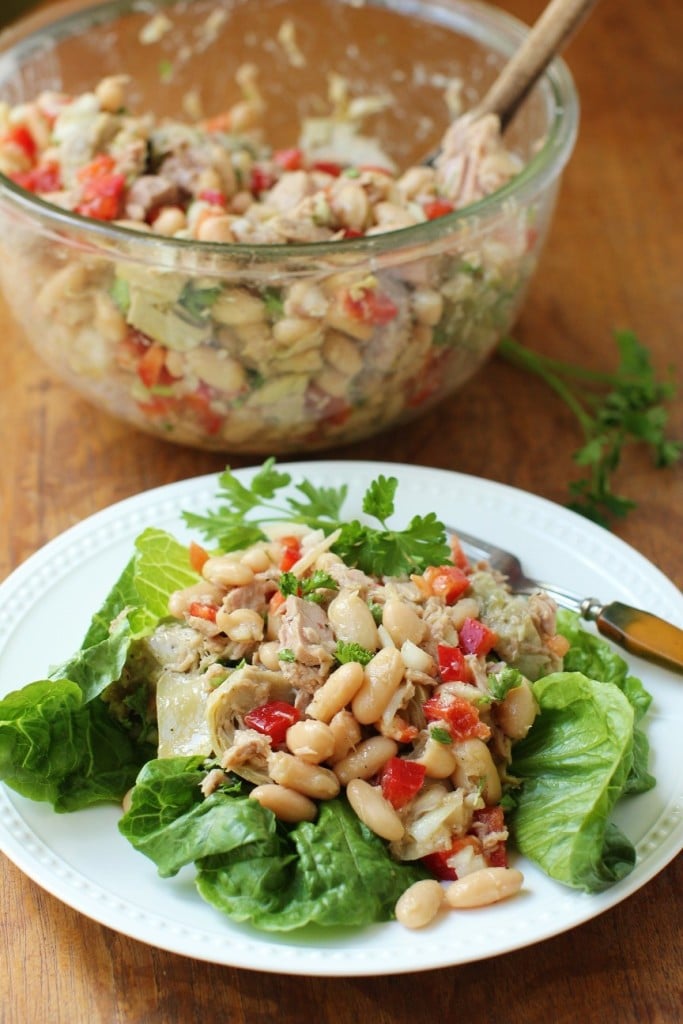 Gardening in northern climates is not for sissies. It works on the principle of ‘two steps forward and one step back’ – a constant battle with forces out of your control. Deeply cold winters, with temperatures plummeting to -40°C (though this year was particularly mild – it only hit -30°C), combine with late spring blizzards and early fall frosts to ravage our zone 3 gardens.

These winter conditions mean that we are really restricted in what kinds of trees and shrubs can survive here. We intrepid northern gardeners carefully nurture trees, shrubs, and perennials with loads of tender loving care, then hold our breaths every spring to see which ones made it through the winter. Sometimes a tree that has survived for 10 years or more inexplicably fails to come back to life in spring, and we’re left heaving it out of the ground and starting all over again. Other times we lose trees and shrubs to wildlife predators. Moose come and chomp off all the tender branches they, in their 6 foot/2 metre high (at the shoulder) splendor, can reach (like this moose visiting our acreage, and this one at my mom’s). Herds of deer come to prune and paw some more. Mice can strip the bark off young trees right at snow level, effectively killing the whole tree to the roots.

And then there are porcupines.

Forgive me my little anti-cute-animal rant, but this little critter with the big brown eyes that visited our apple trees last fall (I know, I know, he is cute): 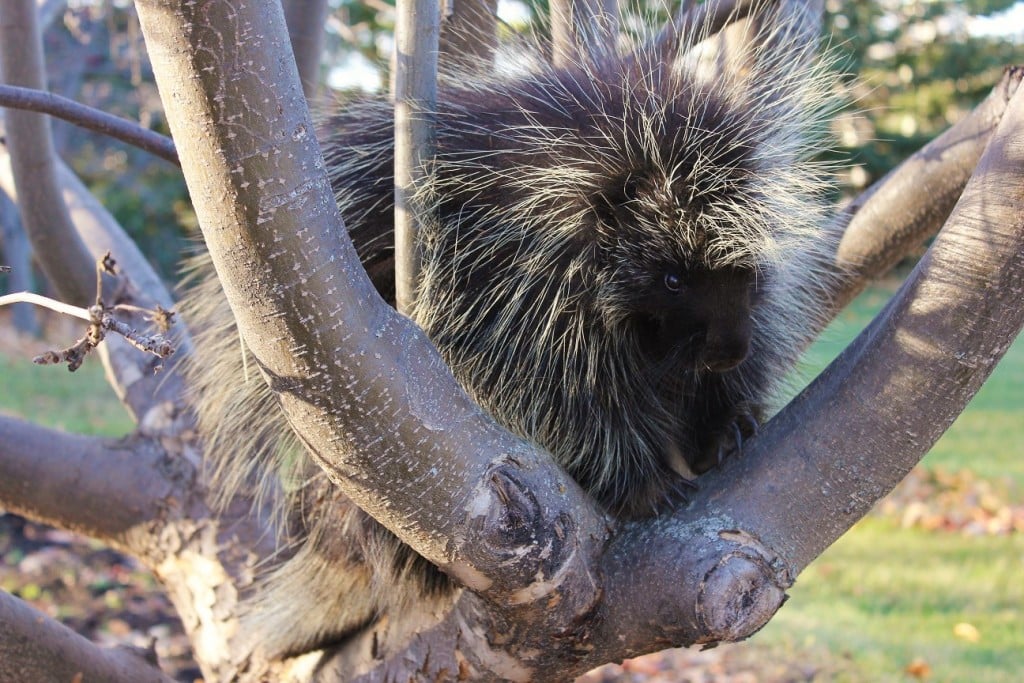 came back and did this to our trees during the winter: 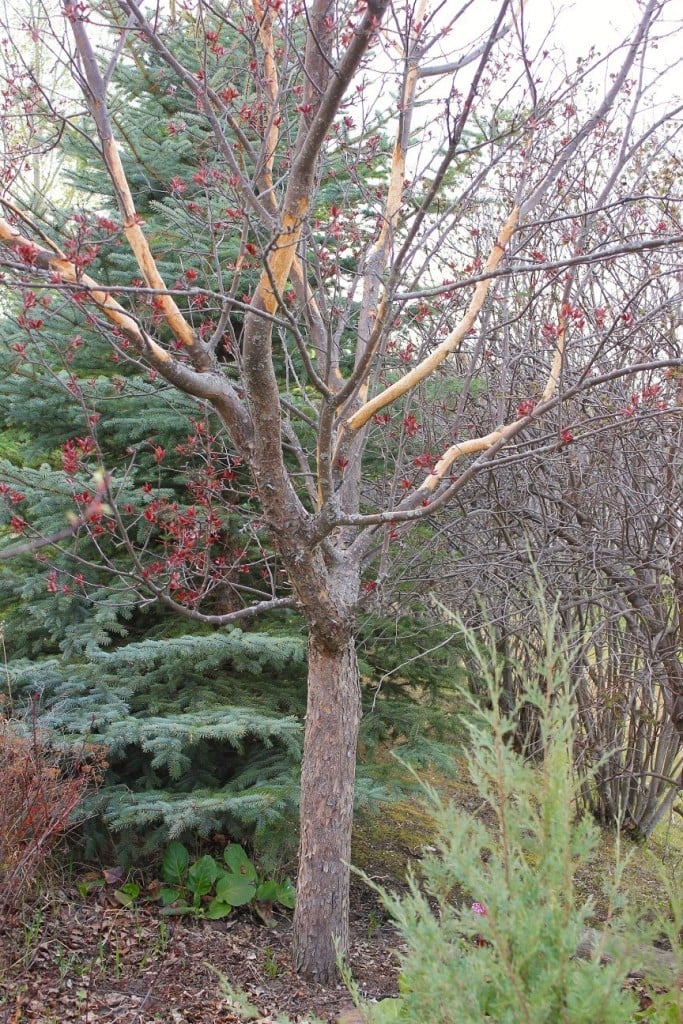 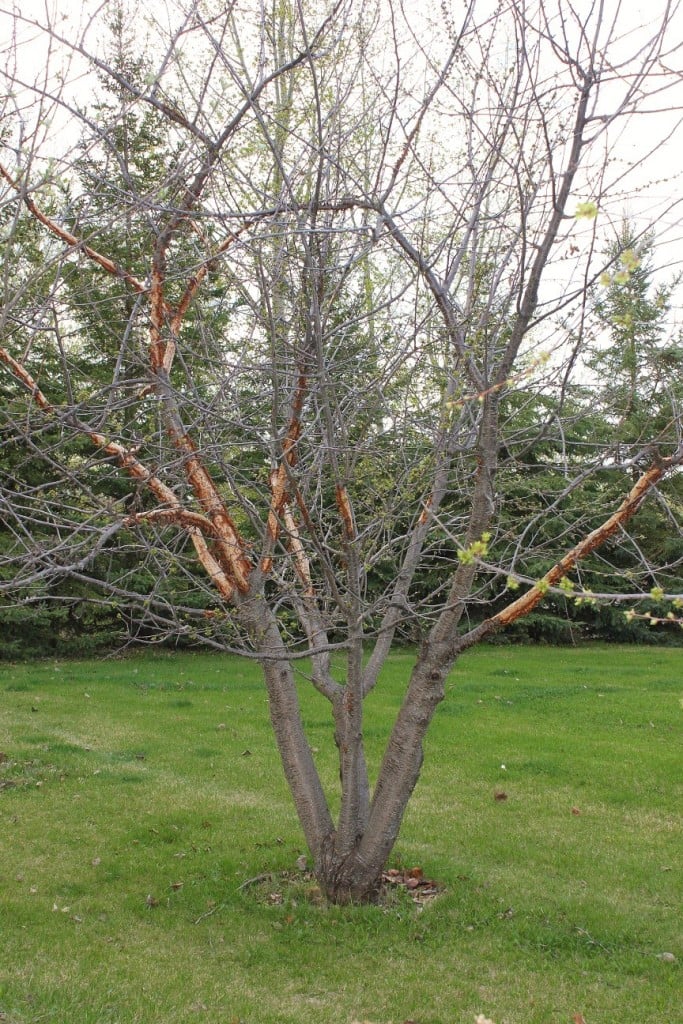 See where that cute little rodent chewed the bark clean off the branches? Well, we’ll now have to prune off those branches below the bark-stripped areas, because the tops will all die since there’s no bark to carry nutrients up the branches. After years of babying those trees (building cages around them when young to keep the deer off, watering, fertilizing, and praying), they’ll be all disfigured and lopsided. There won’t be much left of them, and the heavy pruning might even kill them. We’ll wait years again for the branches to grow in and the trees’ll never look completely normal. Not to mention the lost fruit production from our favourite apple tree, three cherry trees, and one ornamental crabapple tree that the porcupine used as his buffet dinner.

And that dear little porcupine (forgive my sarcasm, I know animal lovers will gasp) caused us more grief than that, too! Not only did it ruin five beautiful trees, at the end of last summer, our dog, Pippa, had a little run-in with his charming prickles. Canine curiosity got the better of Pippa, and after a mouthful of quills and a late-night run in to the veterinary emergency clinic an hour’s drive away, where the vet had to anesthetize her and remove over 200 quills from her mouth, the bill came to a choke-inducing $700.

I no longer think that porcupine is in the least bit cute. At. All.

If he ever shows his nose in our yard again, I’ll be jumping up and down and chasing him out of here as fast as his clumsy little body can lumber. You have been warned, Mr. Porcupine!

And what does this all have to do with a Tuna and Cannellini Bean Salad, you ask?

Well, it’s a convoluted story, but looking at those trees makes me see that spring is poking it’s verdant green nose into all corners of our yard and garden. The pear tree is in full glorious bloom. 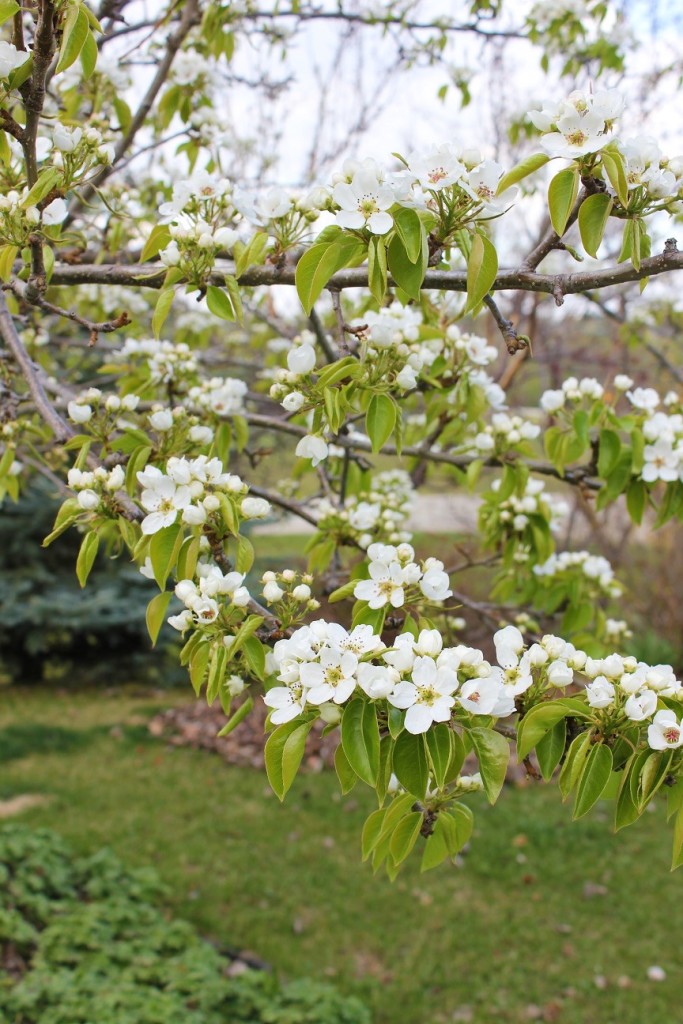 Patches of azure blue squills create waves beside the path. 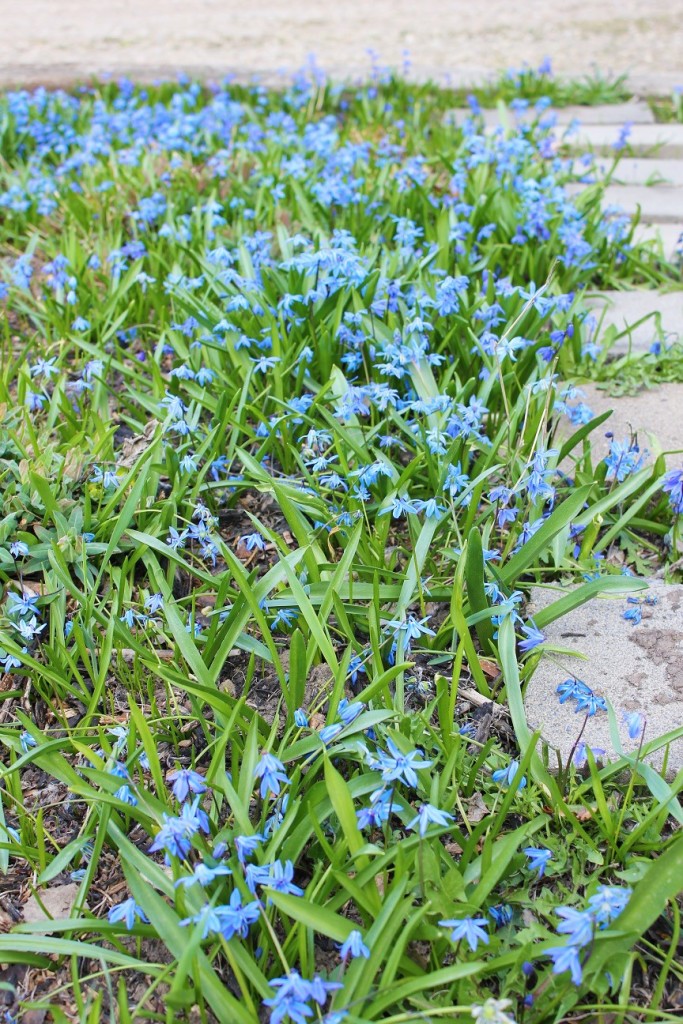 Even our motley crew of chickens is happy to get out of the coop and scratch around in the dirt: 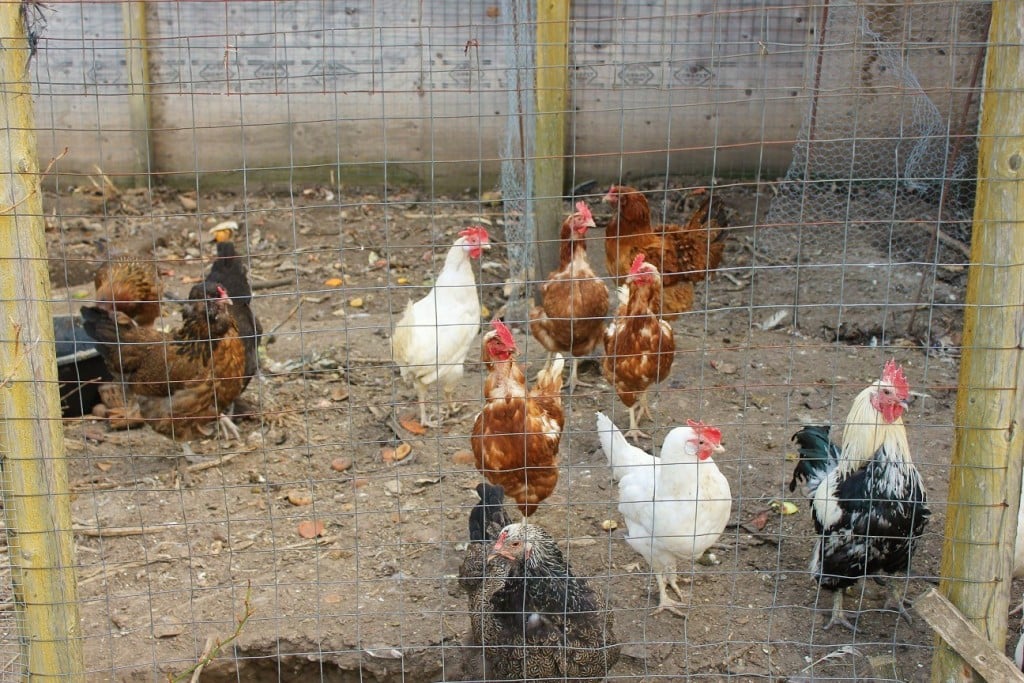 Seeing all those signs of our unseasonably early spring here in northern Alberta (many years we can still have snow on the ground in April) makes me itch to get out in the garden. Spending hours out in the garden  makes me think about preparing meals before I head out there. If I get lost in gardening pleasures and forget to come into the house in time to make a warm meal, I know I’ll have a bowl of this bean salad chilling in the fridge. I can step out of my dusty boots and wipe my grubby hands on my jeans, then add a quick platter of crackers and cheese, a few veggie sticks, and I’ve got a delicious meal on the table. Plus there are few dishes to do, so I can head back out more quickly after dinner to dig in the dirt a bit more before it’s time to come in and be an exhausted couch potato, dozing off and snoring inelegantly in front of the evening news on television.

Kitchen Frau Notes: Cannellini beans are buttery, mild, and soft, but if you can’t find them, any other white beans will do, or even chickpeas/garbanzo beans. This salad tastes even better the next day, and will keep for several days in the fridge.

I love using my mom’s trick for onions in a salad. She always chops them first, then adds vinegar to cover and sets them aside to ‘pickle’ while she cooks dinner or makes the rest of the salad. By the time the onions have pickled for 15 minutes or more, they’ve lost all their attitude and stink, and now add a deliciously piquant punch to the salad, rather than a sledgehammer blow. (She drains the vinegar, but I’ve left it in to use as part of the dressing.) 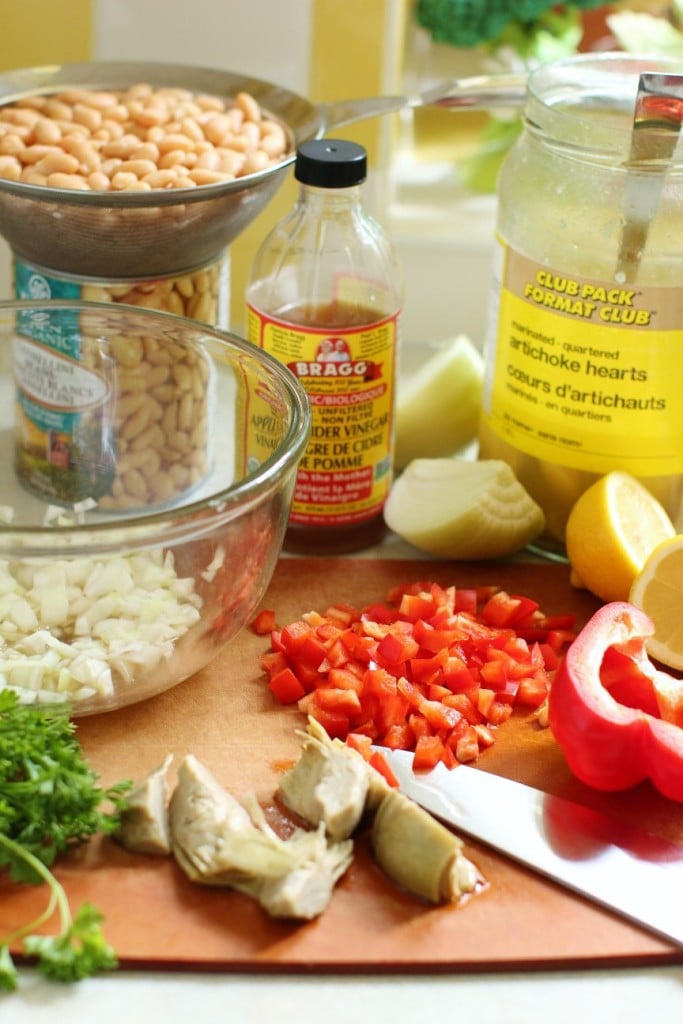 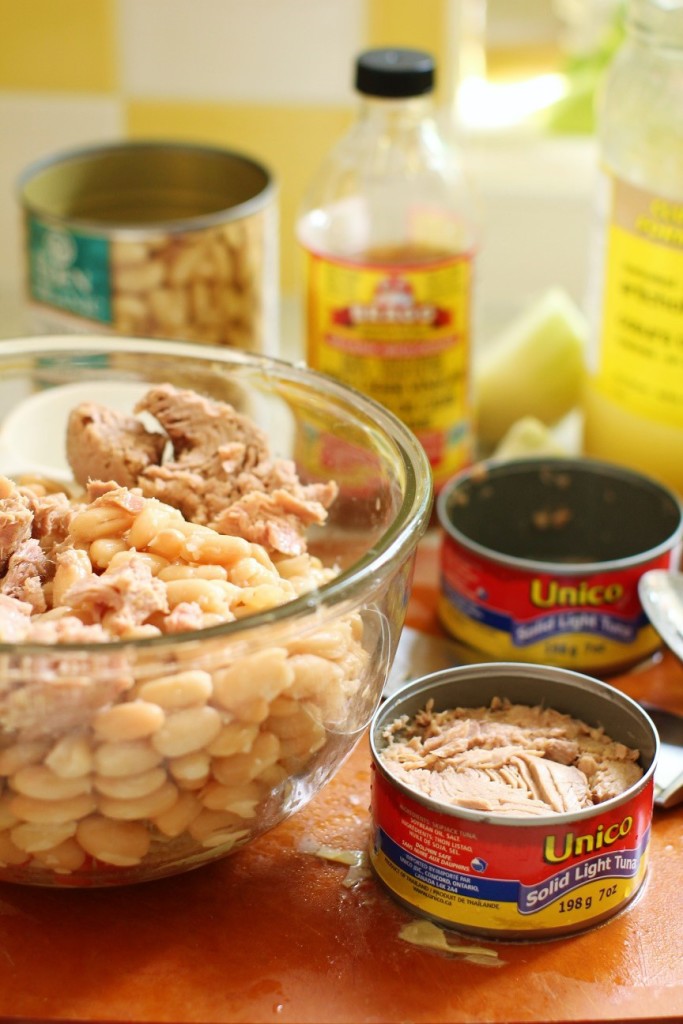 I like to keep a jar of artichoke hearts in the fridge. I can buy the 1.8 litre sized jar of marinated, quartered artichokes at Superstore for under $10 and they are so handy to add to all kinds of dishes and salads, serve alongside a selection of appetizers, or to eat straight out of the jar. Try them in this delicious Mediterranean Fried Rice dish – another great one-dish meal. If you can’t get the big jars of marinated artichokes, use the drained contents of one of the smaller-sized jars instead, or even use regular canned artichoke hearts.

*In the batch of tuna bean salad I photographed, I forgot to add the dried oregano, which I usually include. (I stirred it in after taking the photos, but by then it was getting late and everyone was hangry, er, hungry, so I decided it was best not to take any more photos – in the interests of keeping my family’s support for this food blogging thing). 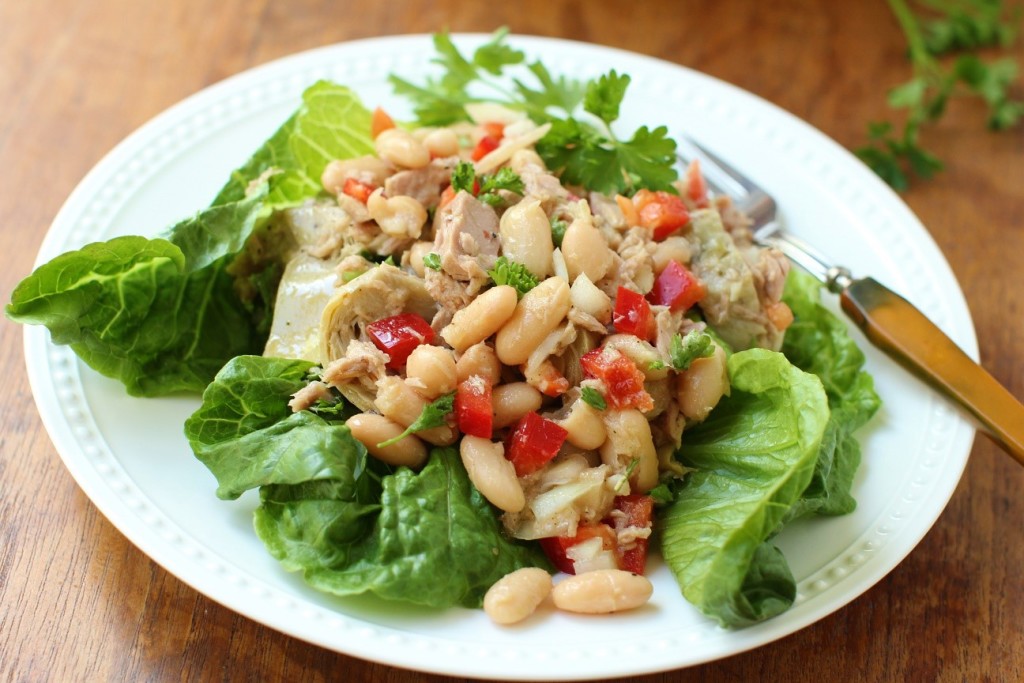 Finely dice the onion and put it in the bottom of a large bowl. Pour on the apple cider vinegar and stir to moisten all the onion pieces. Set the onion and vinegar aside to pickle while you prepare the rest of the ingredients (let them marinate at least 15 minutes).

Drain the beans, pour them into a sieve and rinse them under running water. Set them aside to drain.

Cut the red pepper into small dice (about ¼ inch/.5cm)

Cut each of the marinated artichoke quarters in half lengthwise.

Toss gently to combine, breaking up any large chunks of tuna. You still want to see the tuna chunks, but don’t want to stir it so much that the tuna becomes mush.

Serve over lettuce leaves if you wish.