Did you know you can quickly and easily make your own homemade sausage patties? No fancy ingredients needed, just a few simple tricks. They're loaded with flavour and fun to make and eat!  (Skip to recipe.) 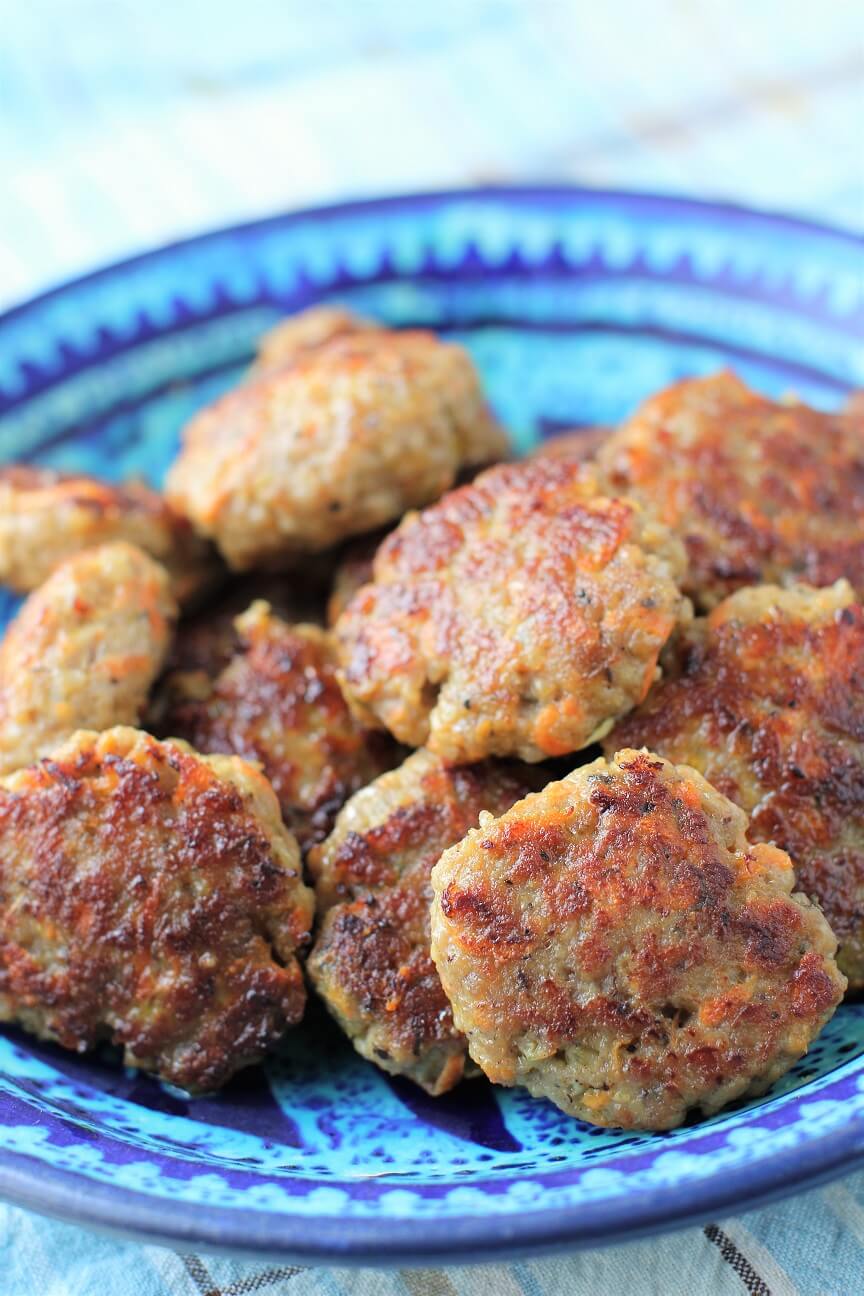 There's no big mystery to sausages. The main difference between them and a hamburger patty or meatball is that sausages are much more highly seasoned and they usually come encased in some kind of an edible skin. Plus, sausages have a kind of 'spring' to them as you bite into them - I'll show you an easy trick to get all that in your own homemade sausage patties, full of good stuff and loaded with zesty flavour. You can make up a batch of sausages at home and serve 'em any way you like - with pancakes, or eggs, or pasta, on a bun, or straight up for dipping in ketchup.

The casing on a sausage is made from cleaned out animal intestines or made from collagen and cellulose. The sausage skin's only purpose is to hold the meat together in the familiar sausage shape - it has no taste itself, so we can dispense with that for our homemade sausages. We'll just make 'em in a fun little patty shape.

The other difference between sausages and hamburger patties that I mentioned above is texture. The meat in a standard sausage is a little more 'tight' in texture, with a gentle 'bounce' when you bite into it that's different than a looser hamburger patty. It comes from the way the meat is mixed and how it is seasoned. Sausages are saltier than a regular hamburger, and the salt works on the protein fibers in the meat to line them up and make the meat mixture firmer. It's easy to replicate that texture with a little trick - a pinch of baking soda works on the meat in much the same way the salt does, and you don't have to wait as long for it to do it.

When making regular hamburger patties, you want to use a light hand and barely mix the ingredients, but in sausage making it's the opposite. Mixing and kneading the meat together really well also helps to make it hold together better and gives you more of a traditional sausage texture.

So, there are 3 things we can do to make great homemade sausage patties with a beautiful springy texture and deliciously salty taste:

These little homemade sausage patties have a cuteness factor that make them fun to eat, and perfectly dippable, too. They taste really good served with some delicious homemade applesauce.

You can also roll the sausage meat into little balls and use it in recipes as bulk sausage, like in Pasta and Sausage Skillet Supper, Savoy Cabbage with Mustard Cream and Sausage Dumplings, or Mediterranean Fried Rice.

William was the main chef in making these sausages together with me. He had a great learning experience in seasoning and mixing the meat. There were times he was a little 'grossed out' handling the raw meat, but in the end he was so proud of his creation and devoured them eagerly. He made pancakes while we waited for the sausage to rest, and served them all together for a fantastic 'breakfast for dinner' meal - a favourite with kids and grownups alike.

How to Make Homemade Sausage Patties

First you mix up the ground meat with salt and baking soda and let it rest so it can get 'springy'. (Okay, so mixing raw meat with his hands was maybe not William's favourite thing to do, but he did it! And he was very proud of himself afterward.) 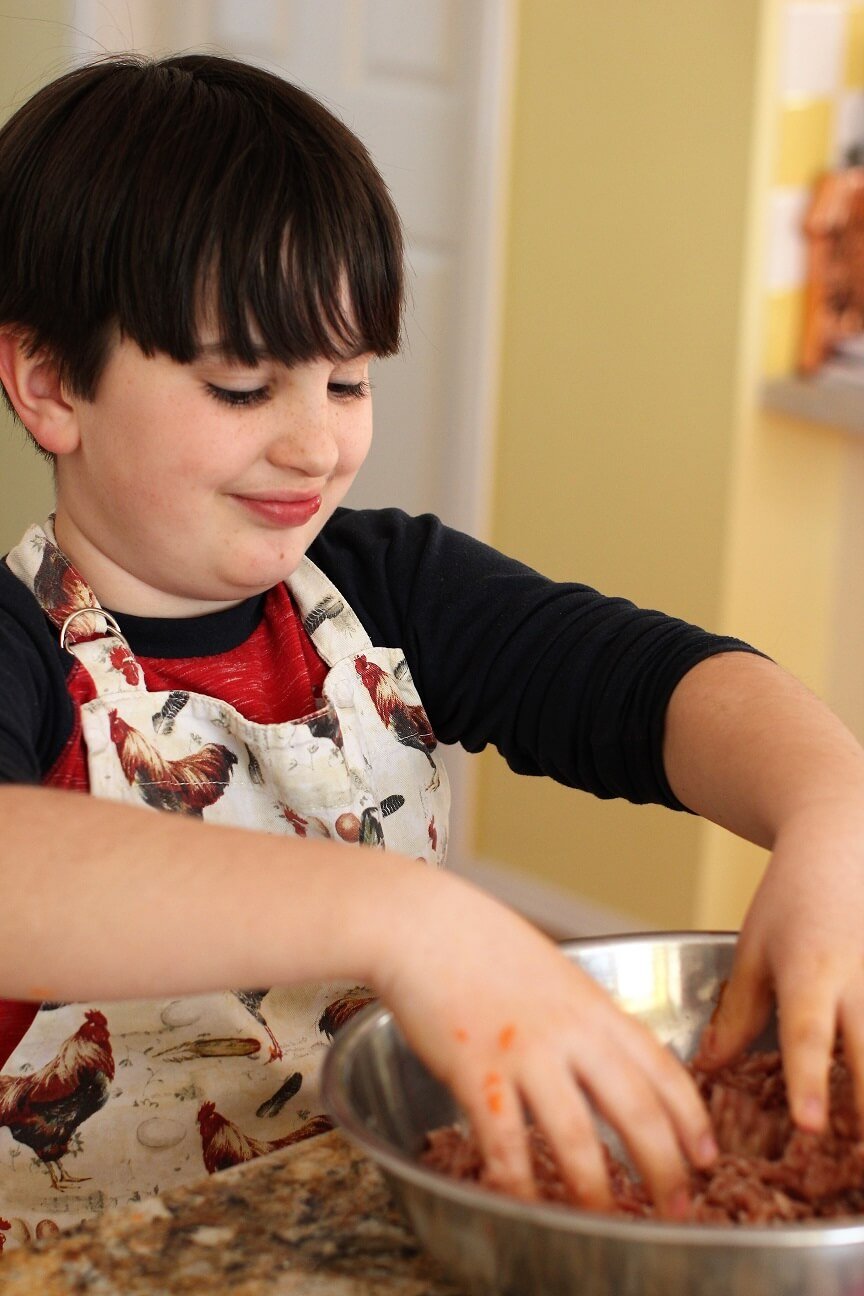 After it rests, you grate up a carrot. 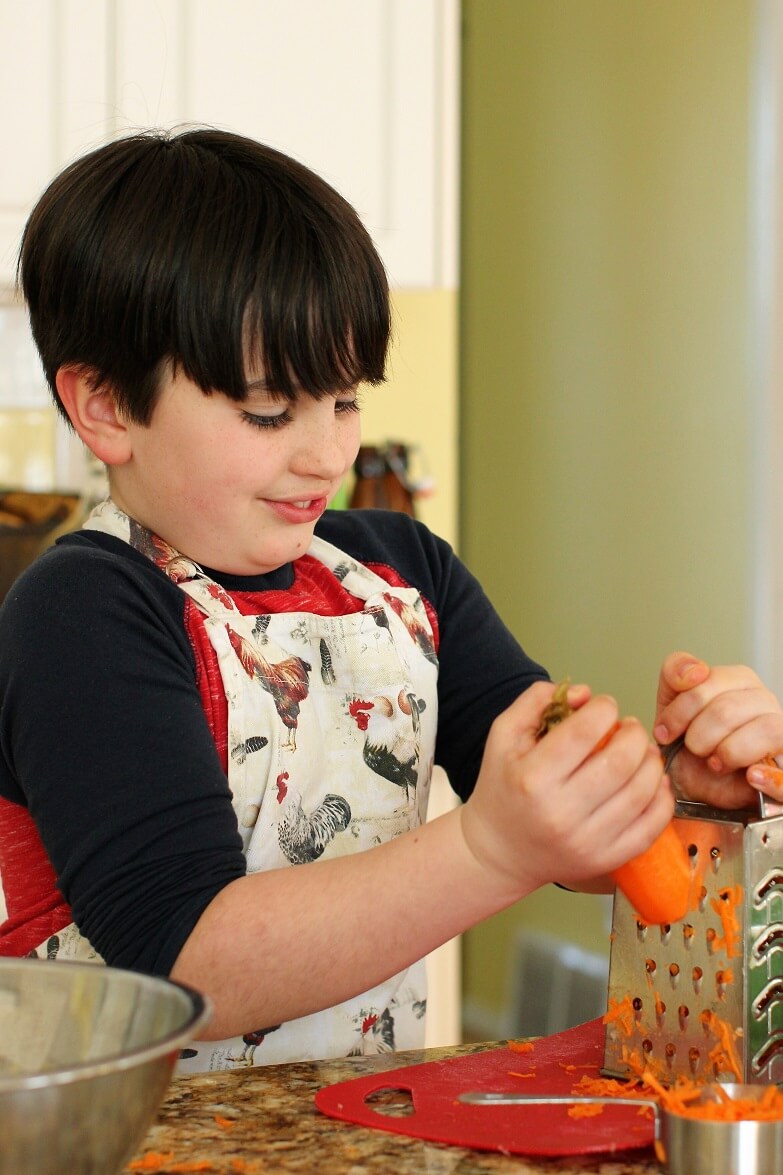 Then you grate the onion - that one's a tear jerker. 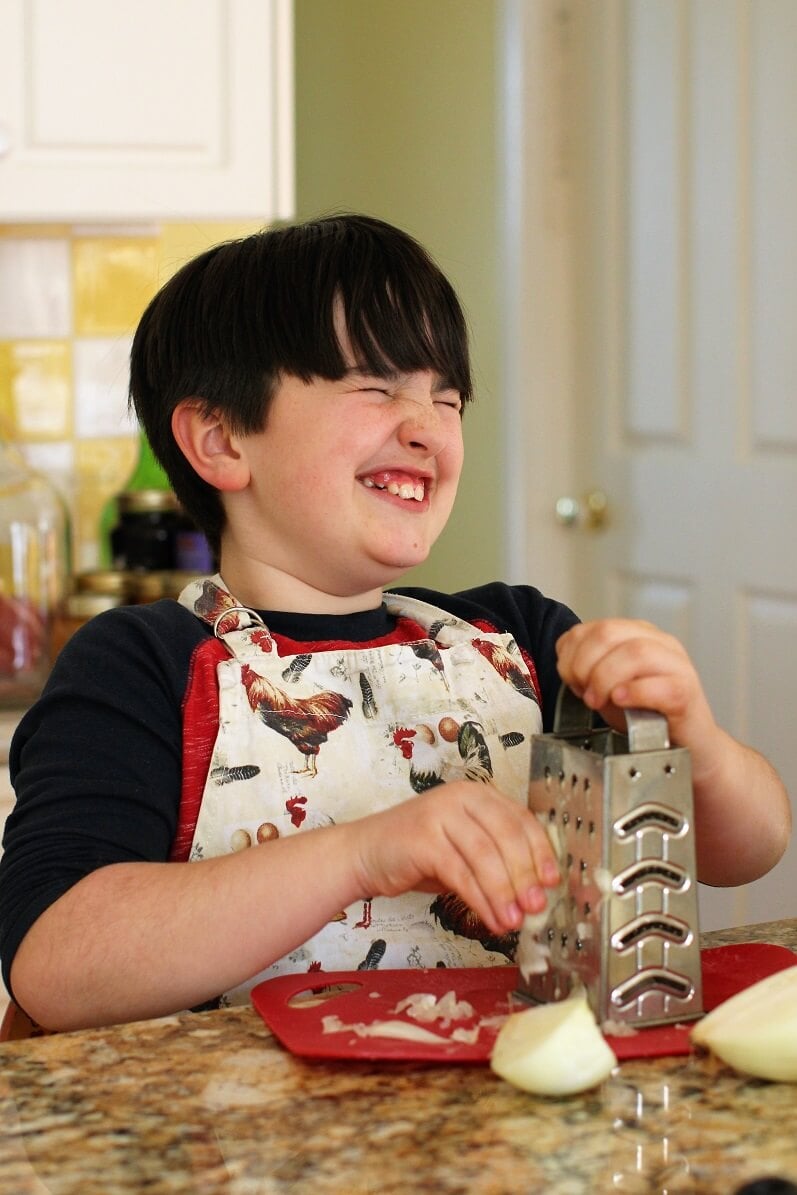 You add it all to the meat with some spices and then you mix it really, really well; again with your hands.

An easy trick for portioning out the meat into even patties is to pat the mixture down evenly, then cut it into even wedges. Each wedge will make two patties. 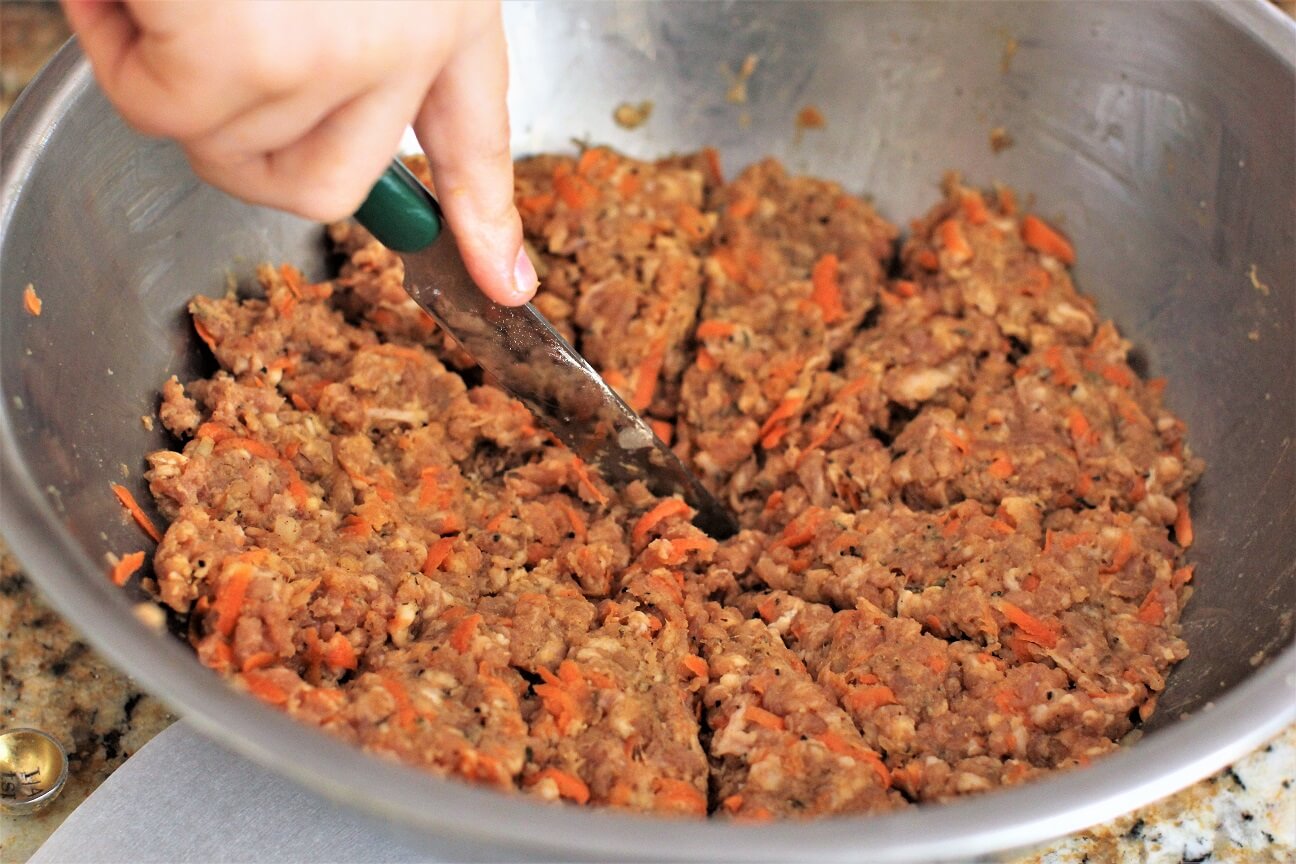 Rolling out the patties is much more fun than mixing the meat, according to William. 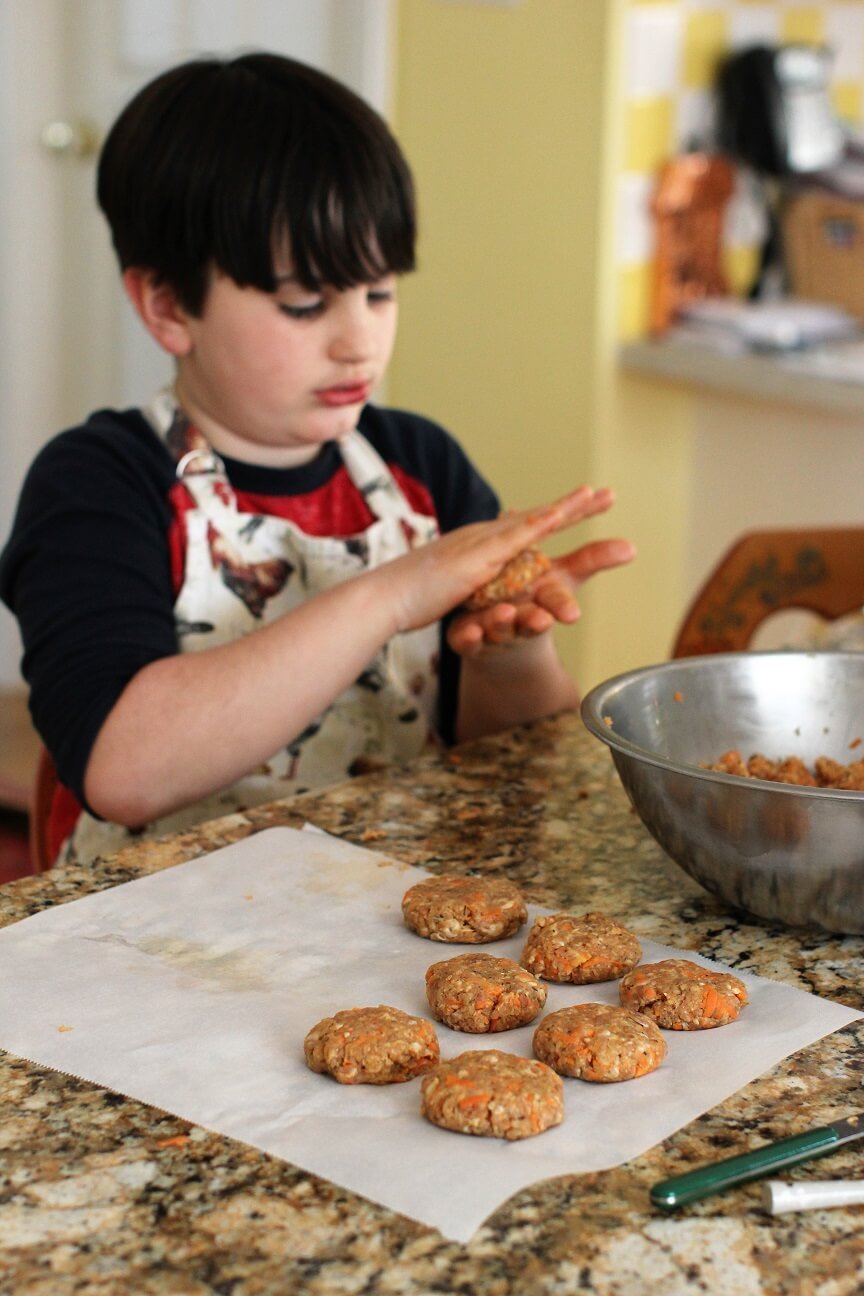 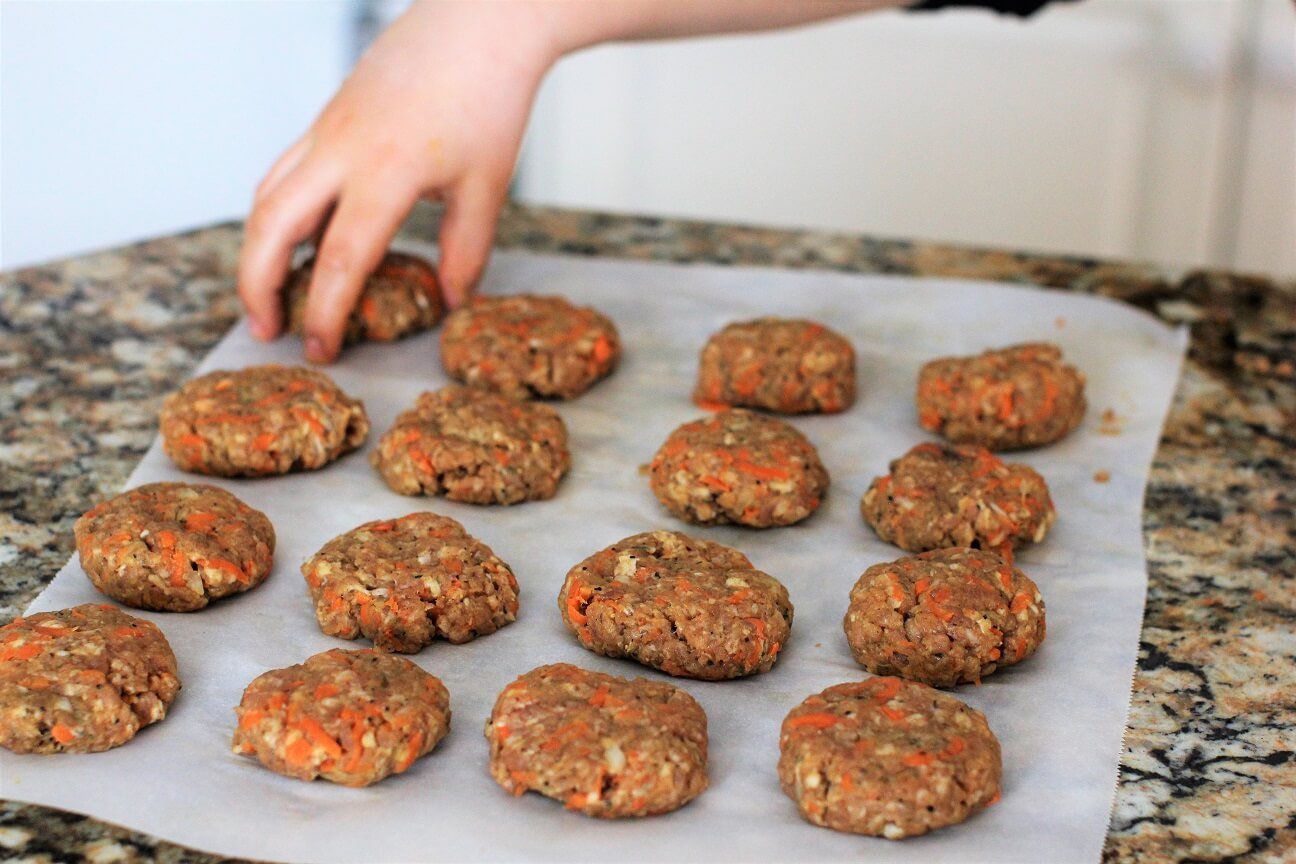 Once you start to fry them up, the delicious smell will make you want to eat them right away! 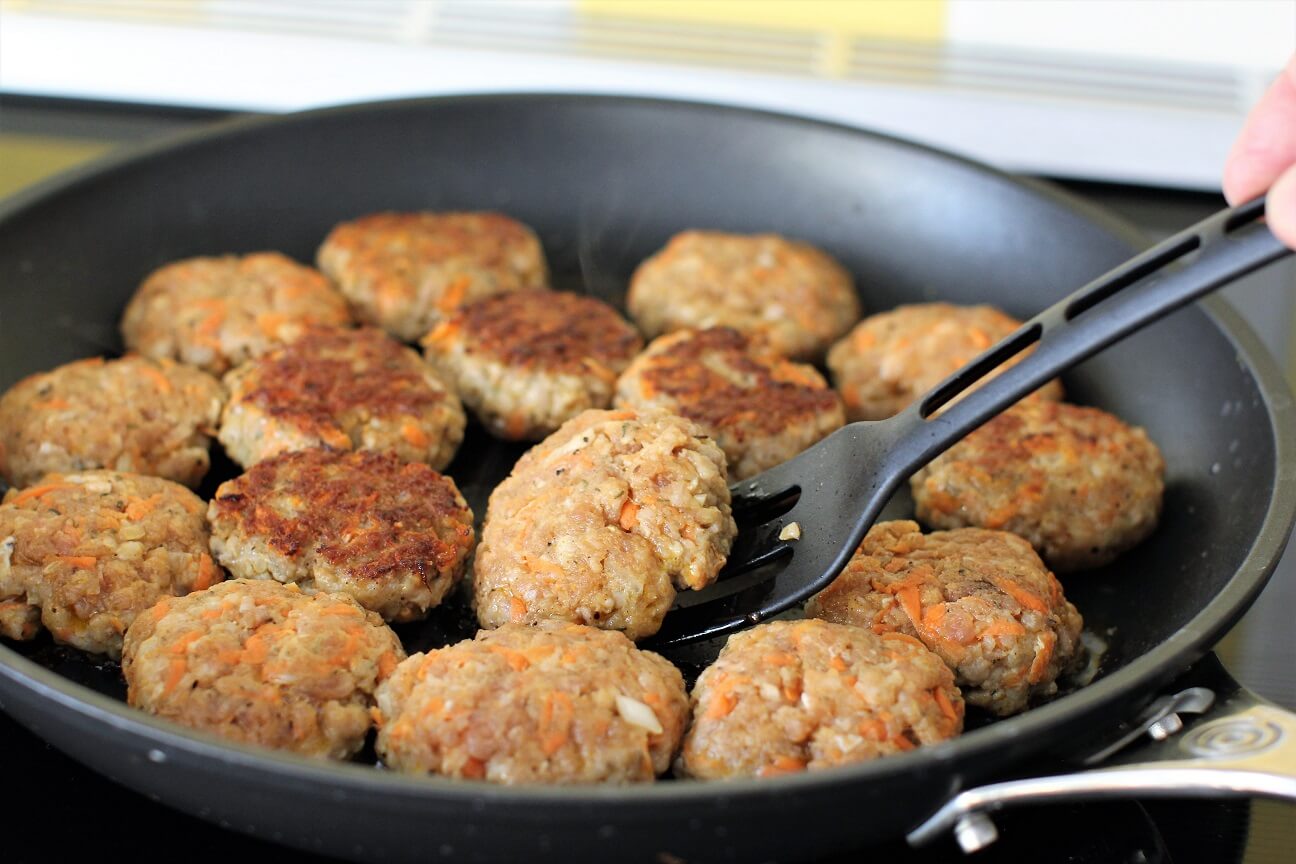 Yum, homemade sausage patties, golden brown and savoury, crispy on the outside with just that right texture inside, and fantastic spicy sausage  flavour.

Kitchen Frau Notes: Ground pork gives you that classic sausage flavour, but you can also substitute with ground beef. Chickpea flour adds fiber and a nice binding quality, but all purpose flour will work well if you don't need to be gluten-free. The carrot is optional, but it does add a bit of sweetness and extra flavour, fiber, and colour.

If you prefer a more traditional shape, roll each ball of meat mixture into a long thin sausage shape, about as thick as your thumb. The sausage meat can also be left unshaped so you can crumble it up to use in recipes. 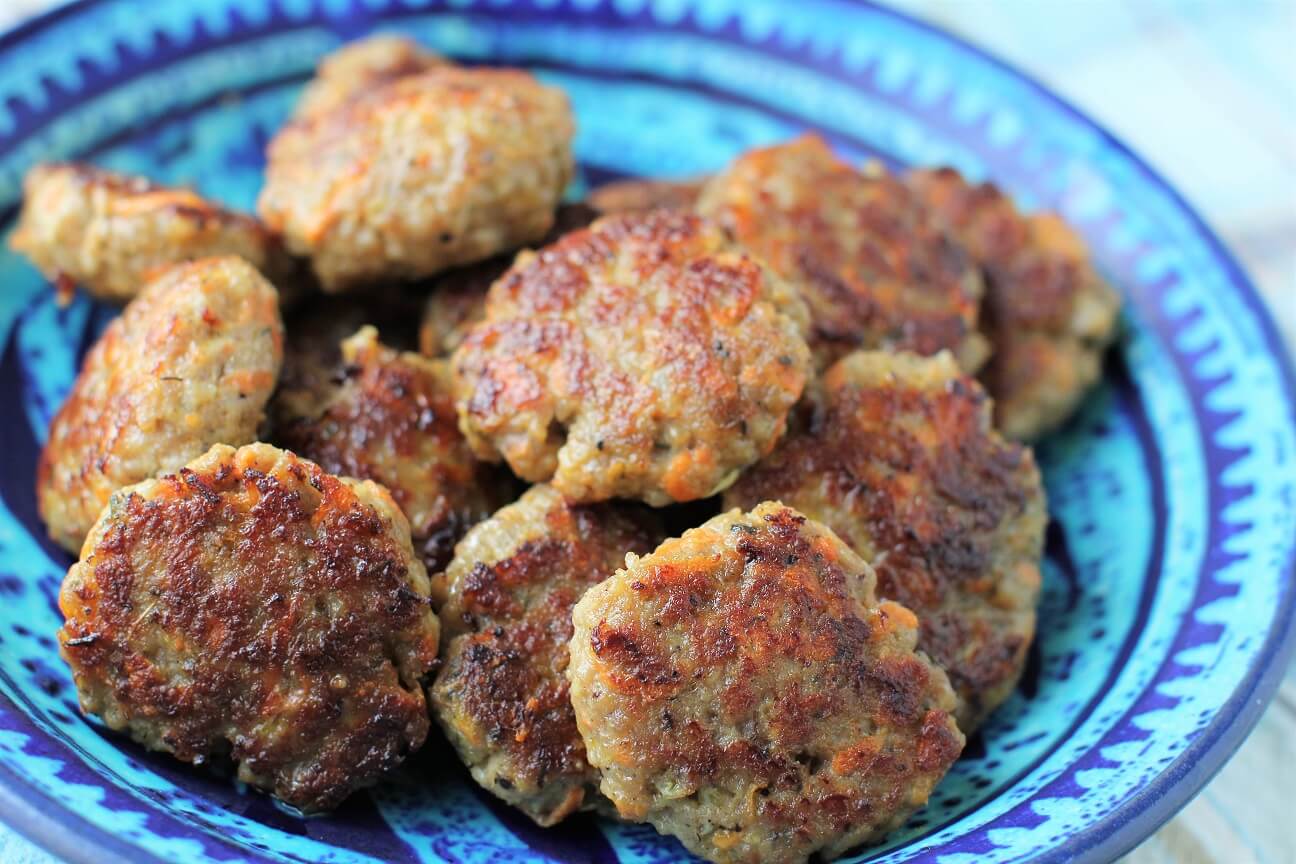 Add the salt and the baking soda to the ground pork and mix it well into the meat using your hands. Leave it to sit for at least 30 minutes to marinate (but it can sit for up to 8 hours if you want to prepare the sausage meat ahead), so the salt and baking soda can work on the meat proteins to make it more 'springy'.

If you're using the carrot, shred it on the large holes of a box grater, then chop up the pile of shreds a bit more with a knife.

Add the carrot and the remaining ingredients to the ground meat, including any extra juices from grating the onion. Mix everything together really well with your hands, knead the mixture until it gets a bit sticky, at least for 2 to 3 minutes.

Pat the sausage meat mixture down into the bottom of the bowl and use a butter knife to cut down into the circle, dividing it into 8 wedges.

Scoop out one wedge of sausage meat at a time and divide it into two; roll each part into a ball and flatten it into a small patty (or a cylinder the size of a small breakfast sausage). If the meat is too sticky to roll, moisten your hands with water between rolling each patty.

Heat a drizzle of oil, coconut oil, or ghee in a skillet over medium heat (if you cook them nice and slowly, they will stay more moist). Fry the patties until golden brown on both sides and cooked through (about 5 to 6 minutes per side). You may need to do them in two batches if you have a smaller pan. 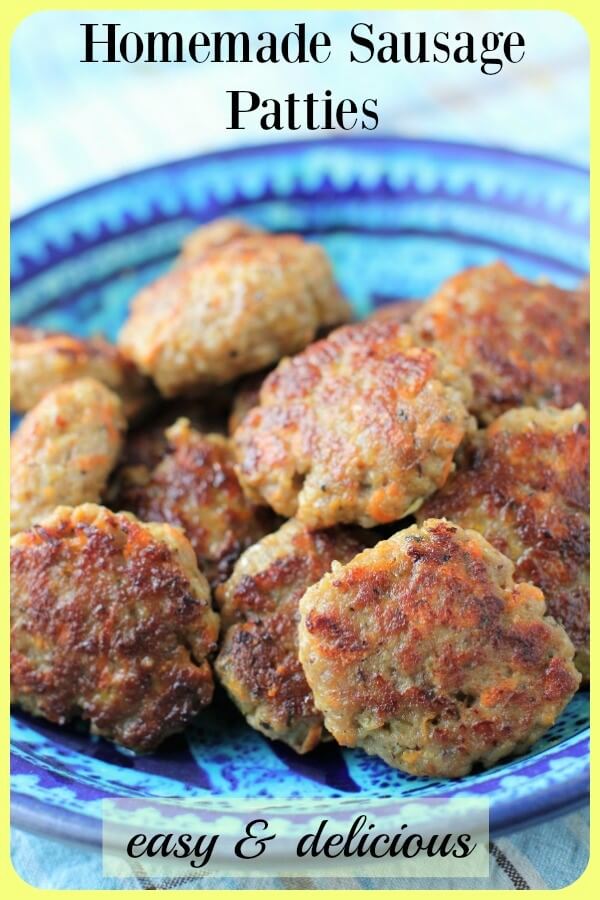 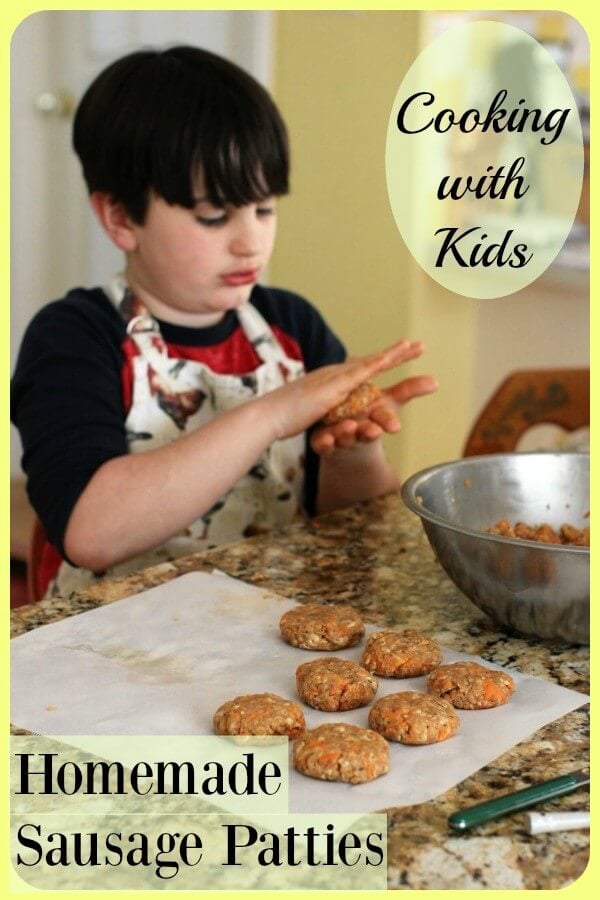 Cooking with Kids: Burger Pops (Fantastic Food on a Stick)