Homemade applesauce is soooo delicious - fresh and intensely fruity - and when it's Instant Pot Applesauce, it becomes an easy treat you can whip up quickly with minimal fuss. A warm bowl of it, sprinkled with cinnamon, is divine, and a mound of it on pancakes or with pork chops is a simple, classic flavour combination. (Skip to recipe.) 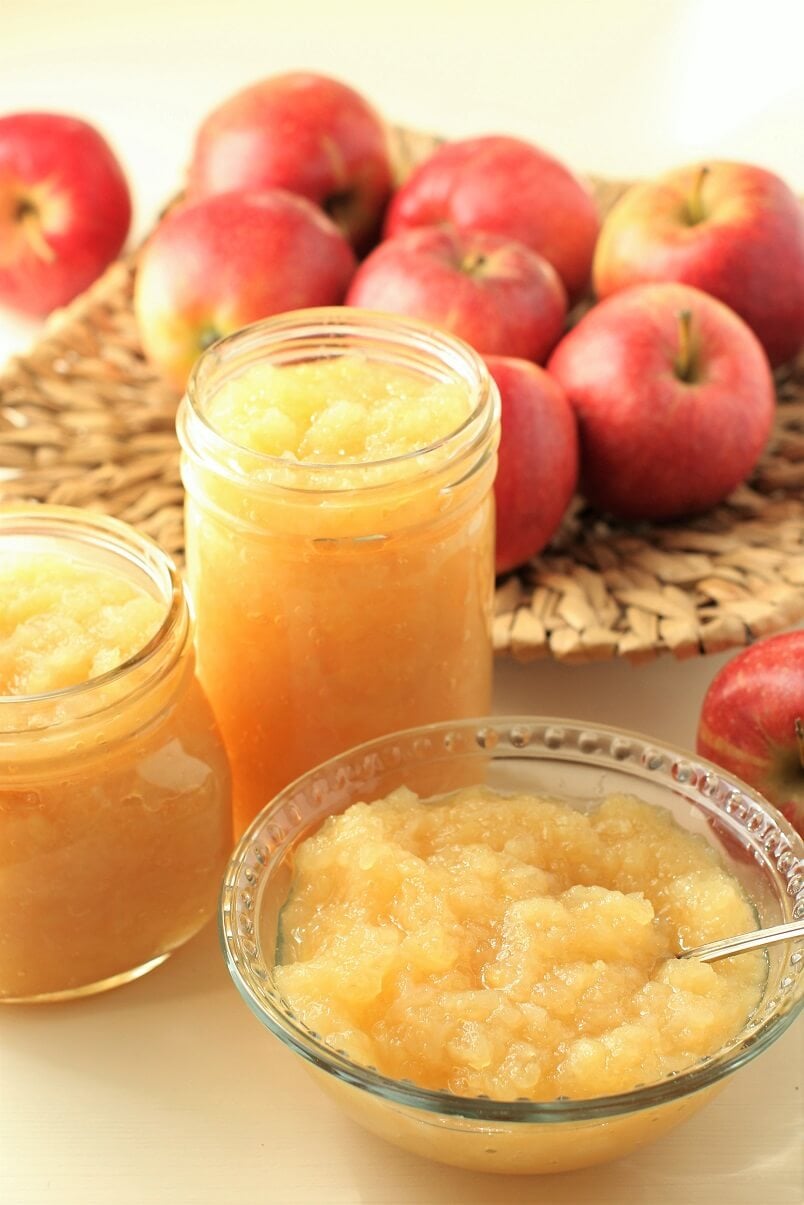 A glistening, golden bowl of applesauce is a simple pleasure indeed, especially if it's still warm from the pot, sending its fruity aroma curling through the air. Just spooning it from the bowl straight into my greedy mouth is a blissful feeling that transports me back to childhood.

For most of my early teen years my after-school snack every day was a bowl of my mom's home-canned applesauce with a handful of dried currants stirred through it and a generous glug of thick, fresh cow's cream from the jug in our fridge poured all over the top of it. As soon as the school bus had dropped us off at our farm driveway and my sisters and I had made it into the house, I'd drop my books on the floor and head for the fridge to make myself this bowl of comfort. The cold fruity applesauce formed a silky bed for the chewy little pops of sweet currants, and that luscious fresh cream turned it into a decadent snack that felt more like a rich dessert.

I'm not sure how or why I first decided those three ingredients should go together (probably because there weren't any junk food options in our house), but they became a combination I loved, and like Pavlov's dogs, I was conditioned to crave a bowl of that lovely deliciousness the minute I came in the door after school.

Just thinking about it now brings me back to those idyllic days of growing up on the farm in southern Alberta.

My mom would can quarts and quarts of applesauce every fall, and we ate the golden preserve in all sorts of ways: as dessert, with pork chops and roasts, on pancakes, and especially on Kartoffelpuffer, the German potato pancakes she made often. 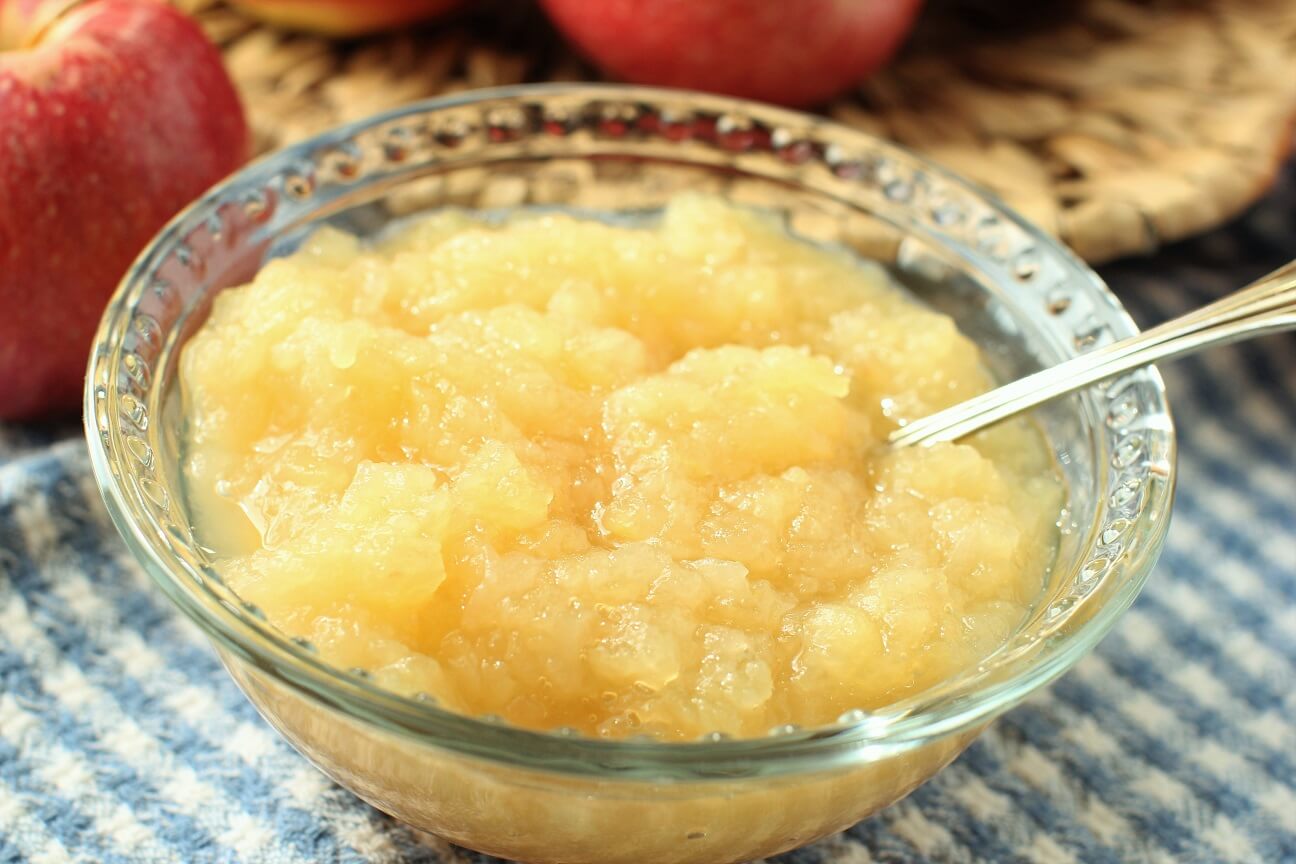 I think applesauce is more versatile if you make it without much cinnamon, as sometimes you just want the pure fruity flavour, and it's easy to add a sprinkle of cinnamon when serving if you wish. It's a matter of personal preference, but if you serve the applesauce with pork or with the potato pancakes, it's better without cinnamon (I think). However, if serving a bowlful of applesauce as a snack or a dessert, cinnamon is a yummy addition, adding a tantalizing warm spiciness.

I also often use applesauce in baking, to replace eggs in a recipe or to substitute for part of the oil. Applesauce provides extra binding properties to batters and doughs. For baking, it is also better to have applesauce without cinnamon added, so it can go into all types of recipes.

It's so quick and easy - no standing over a stove and stirring apples to keep them from burning, and all the bright fresh flavour of the apples is retained.

Gather your apples; a mix of varieties (even just two different types) produces the nicest applesauce with a full, rich apple flavour. (A combination of Golden Delicious and McIntosh is a classic applesauce pairing.) 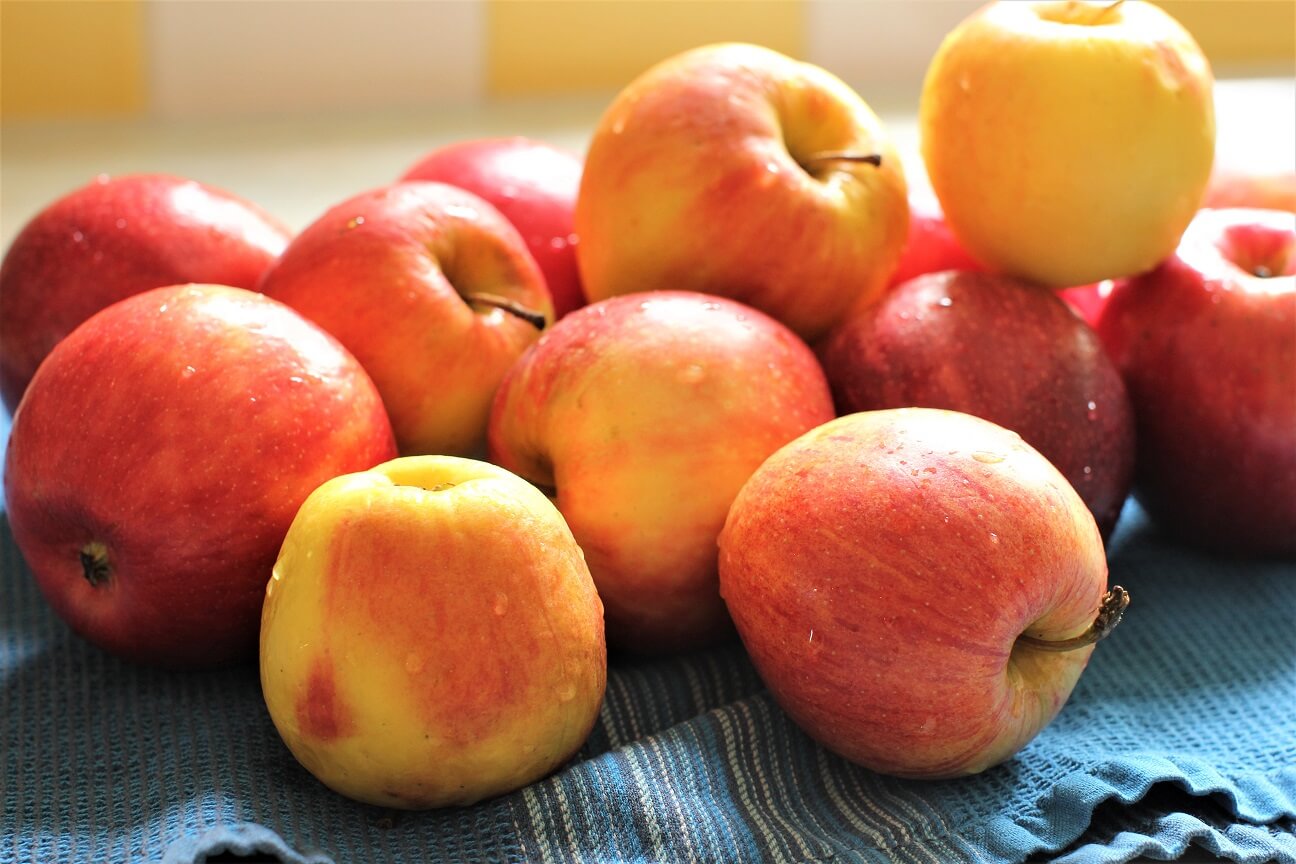 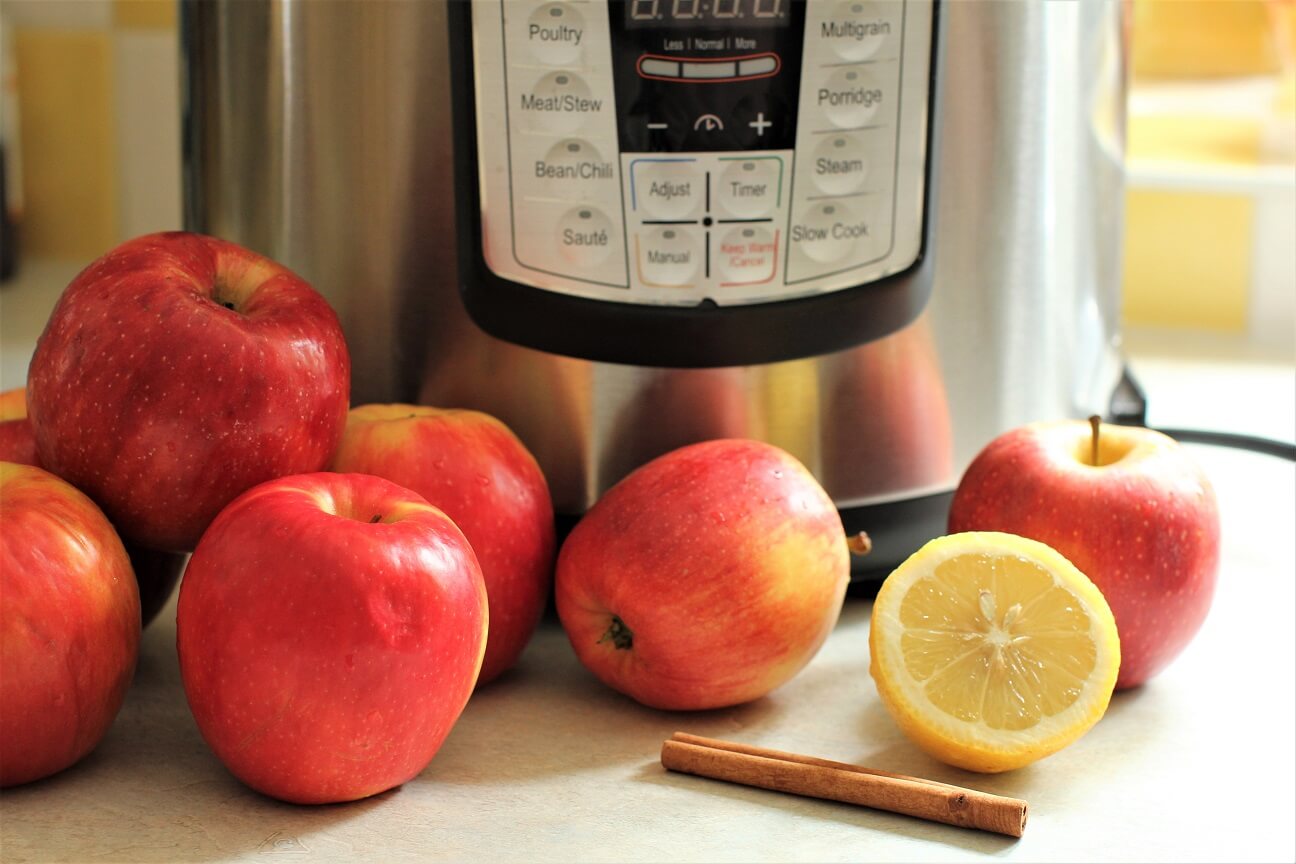 Just peel, core, and cut the apples into large chunks. Toss them with the lemon juice to keep them from browning.

If you choose to use the cinnamon stick, push it down under the apples so it sits in the water at the bottom of the insert.

Seal the instant pot with its lid, set it at high pressure for 8 minutes, then let it naturally release pressure for 20 minutes.

Take off the lid, mash the beautifully tender apples with a potato masher for a chunky applesauce or purée it with an immersion blender/stick blender if you want a smooth applesauce.

Serve it warm right now - with a sprinkle of cinnamon if you like - or keep it in the fridge for a week - or freeze it for up to 6 months. 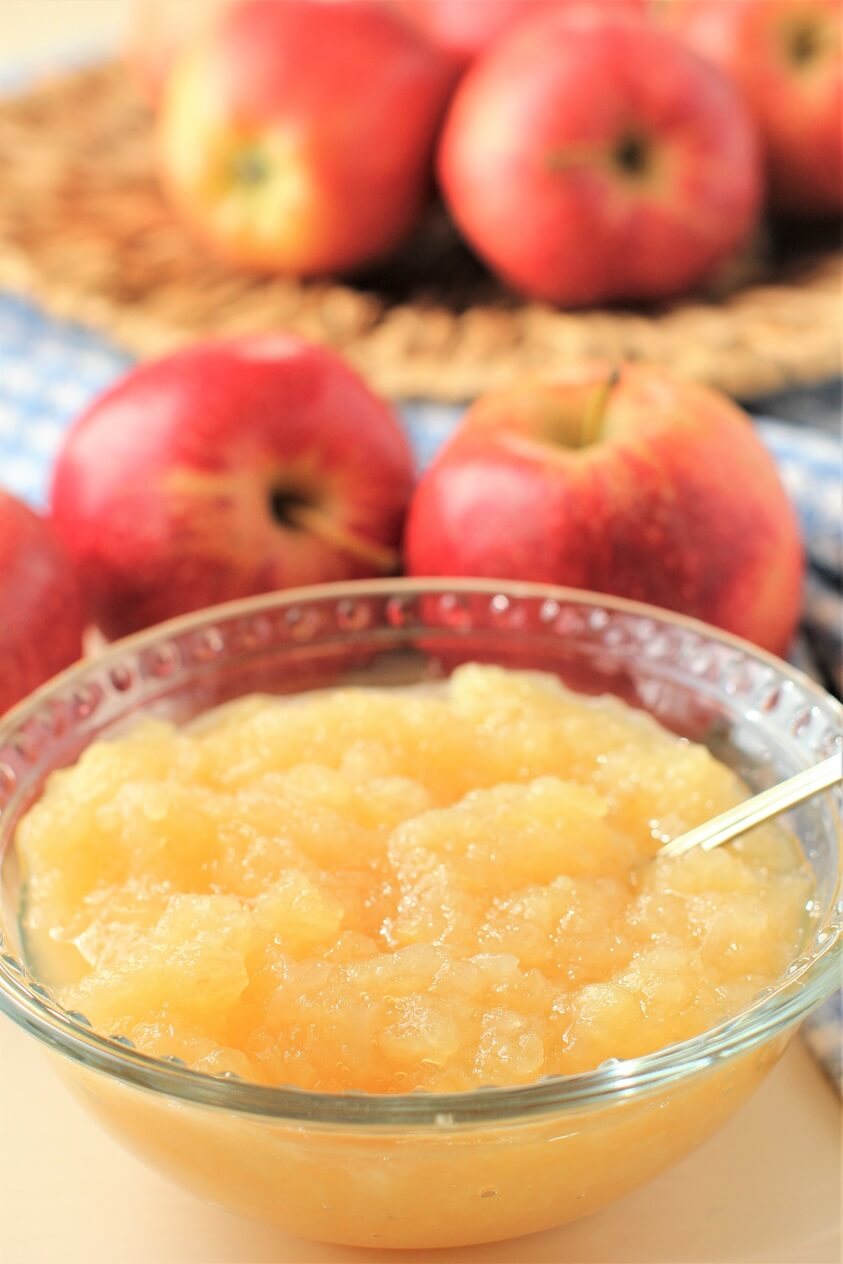 I had a bag of kiwis starting to wrinkle up a bit and nobody was eating them, so I made a Kiwi Applesauce that turned out deliciously! I'll surely make that again. Those tiny black seeds glisten like little jewels in the chartreuse-coloured chunky applesauce and they crackle delightfully as you eat them - it's a bright and fruity variation. Even if you've only got a few kiwi fruits, you could toss them in with your apples when you make your applesauce, to add those little black specks and tangy bright flavour.

Or try a strawberry applesauce variation, using half apples and half strawberries - also delicious! 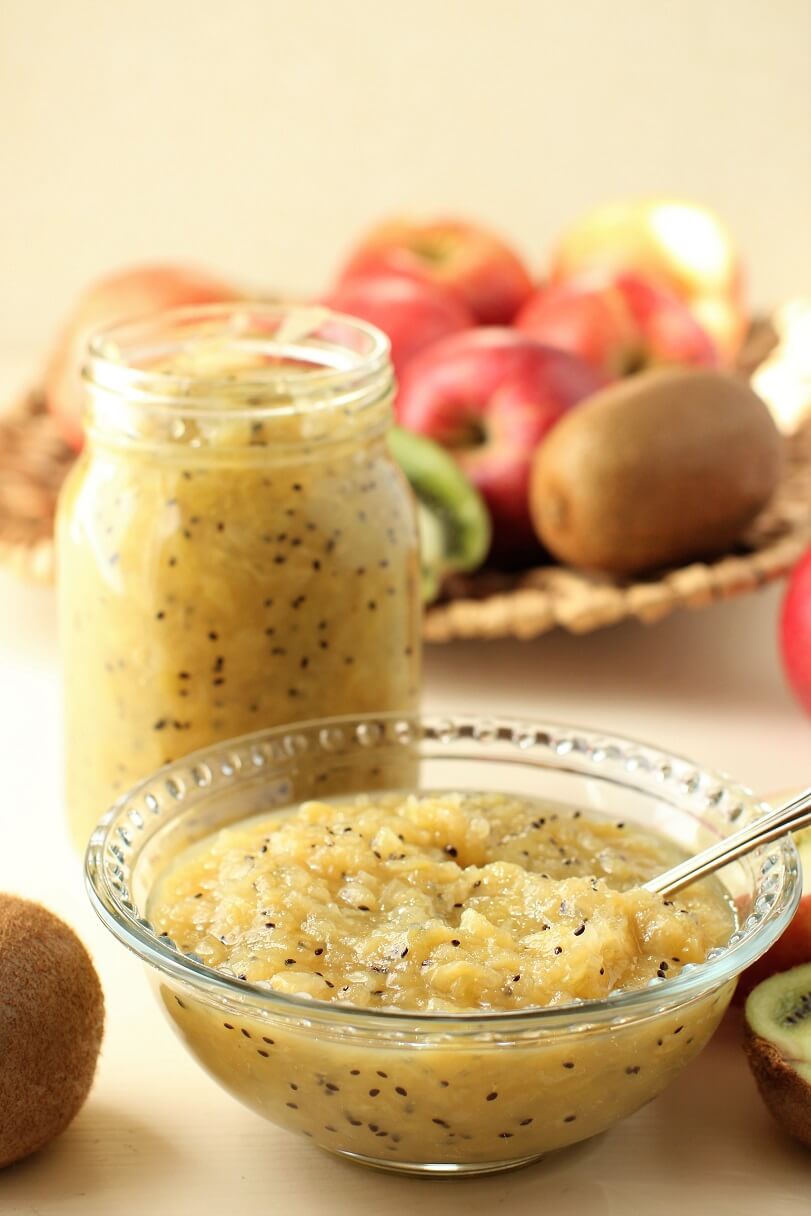 Kitchen Frau Notes: You can sweeten either applesauce to taste with sugar, brown sugar, honey, or maple syrup once it's cooked, if desired, but we find it is naturally sweet enough on its own if you used sweet apple varieties to start with.

SLOW COOKER VARIATION: Alternately, you can make either applesauce version in a slowcooker. Omit the water - the  fruit will give off enough juice and you don't run the risk of burning it before the juice is released when it is cooked so slowly. Cook it on low for 4 to 6 hours, until the fruit chunks are very tender, then mash or purêe as below (don't purée if using kiwi fruit - just mash them.)

STOVE TOP VARIATION: If you want to make applesauce the traditional way, use more water, about 1 cup, and cook the peeled, diced apples in a large heavy-bottomed pot on the stove. Bring to a boil, then reduce the temperature and cook over medium heat. Stir often to prevent scorching, and add more water if the applesauce gets dry and starts sticking. Cook until the apples are tender and falling apart (20 to 40 minutes, depending on the varieties used), then mash or purée as desired. 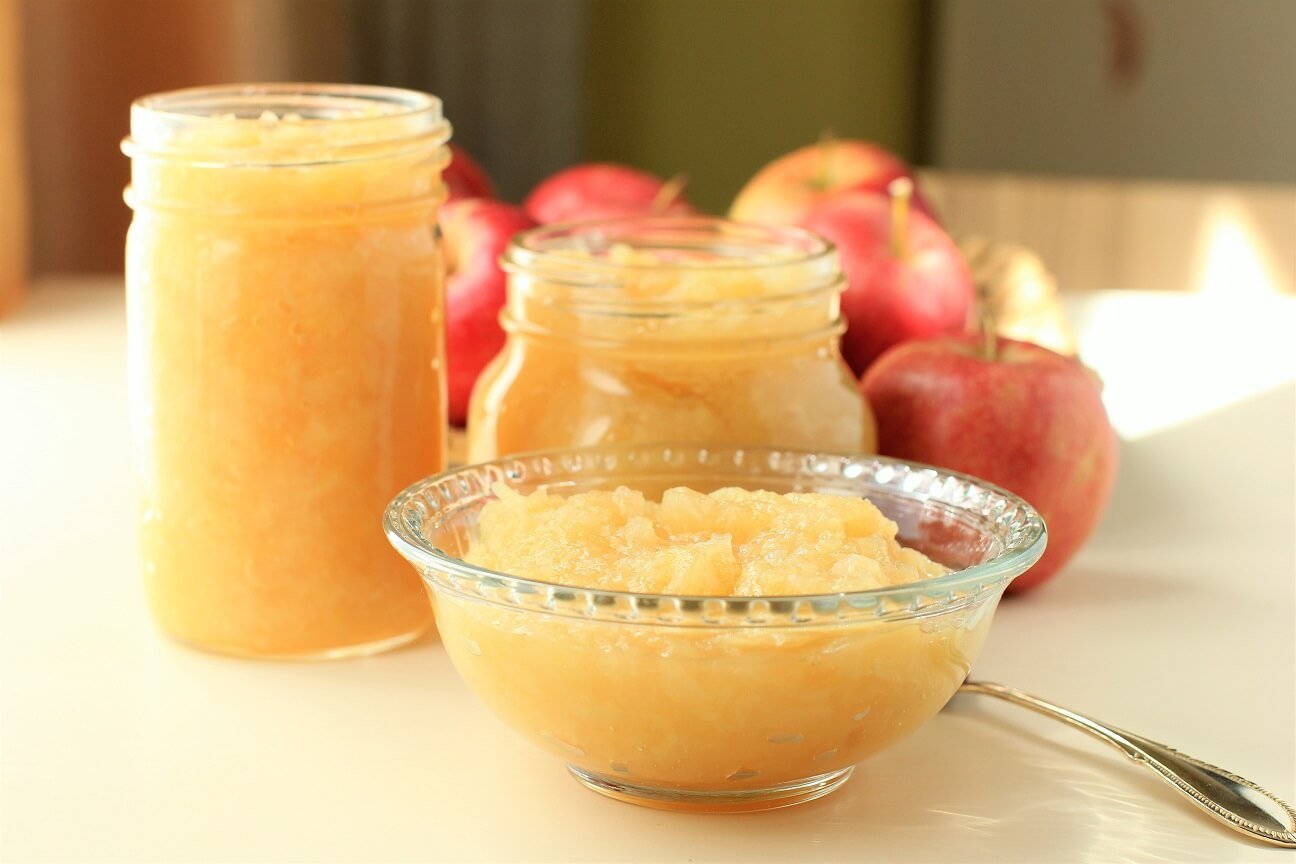 Peel the apples, then cut them in quarters, cut out the cores, and cut each quarter into a couple big chunks. Add the lemon juice and water to the instant pot insert. As you cut the apples, add them to the lemony water and toss them to keep them from turning brown.

If you choose to use the cinnamon stick, push it down under the apples so it sits in the water at the bottom of the insert.

Close the lid and the vent on the instant pot and set it on high pressure to cook for 8 minutes. It will take about 10 minutes to come up to pressure. Allow it to naturally release, without opening the lid, for 20 minutes.

The applesauce will keep in the fridge for 7 to 10 days, and in the freezer for up to 6 months (frozen in freezer-safe containers or in heavy duty zip-top freezer bags).

Makes about 6 cups of applesauce. 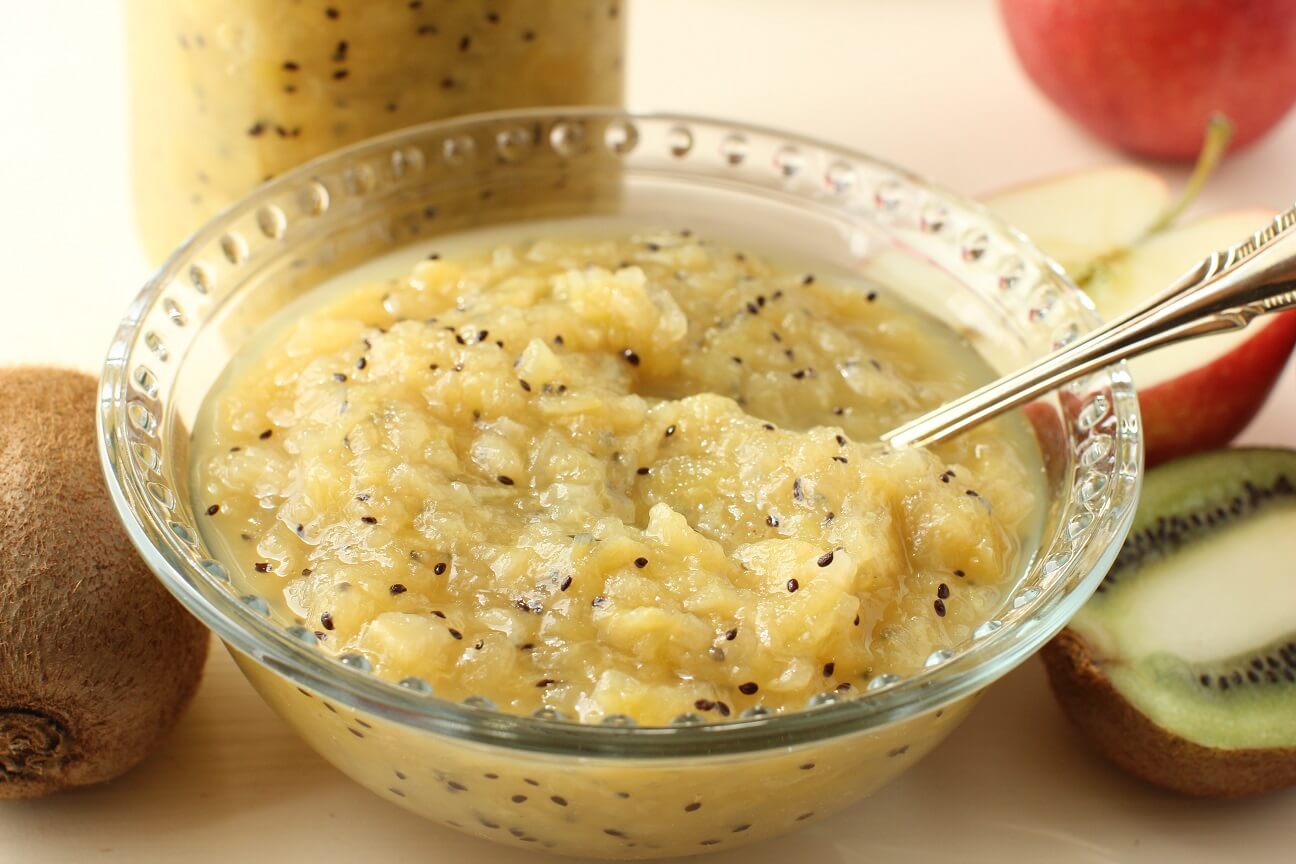 Peel, core, and cut the apples into large chunks. Toss them with the lemon juice to keep them from browning.

Peel the kiwi fruits and cut them into large chunks.

Put the water into the instant pot insert and add the apple and kiwi fruit chunks. (A little bit of water in the bottom of the instant pot can help prevent the 'error' light from coming on.)

Close the lid and the vent on the instant pot, and set it on high pressure to cook for 8 minutes. It will take about 10 minutes to come up to pressure. Allow it to naturally release for 20 minutes.

Then open the lid carefully. Mash the apples and kiwis with a potato masher to make a chunky kiwi-applesauce. Do not use an immersion blender as you want the small black kiwi seeds to remain whole; much more appealing as bright little black specks than as sandy grey matter muddying the applesauce.

If the kiwi applesauce still seems too watery, set the instant pot to the sauté function and cook for 5 to 10 minutes, stirring often, to evaporate off some of the liquid until the sauce is thickened to your liking. Watch it closely as it can burn easily.

The kiwi applesauce will keep in the fridge for 7 to 10 days, and in the freezer for up to 6 months.

Makes about 5½ cups of kiwi applesauce. 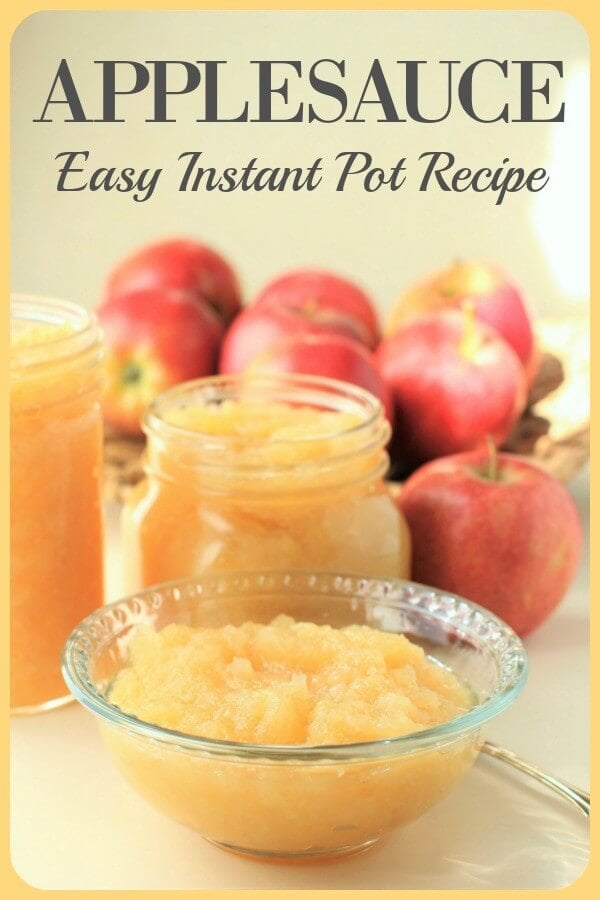