This easy one pot chicken adobo is so full of amazing flavour - yet it only has six ingredients (and no need to brown the chicken first)! Rich, burnished chicken pieces, saturated with flavour and falling-off-the-bone tender, are coated with a tangy sauce you'll be fighting over. Serve it with coconut rice for a special treat. 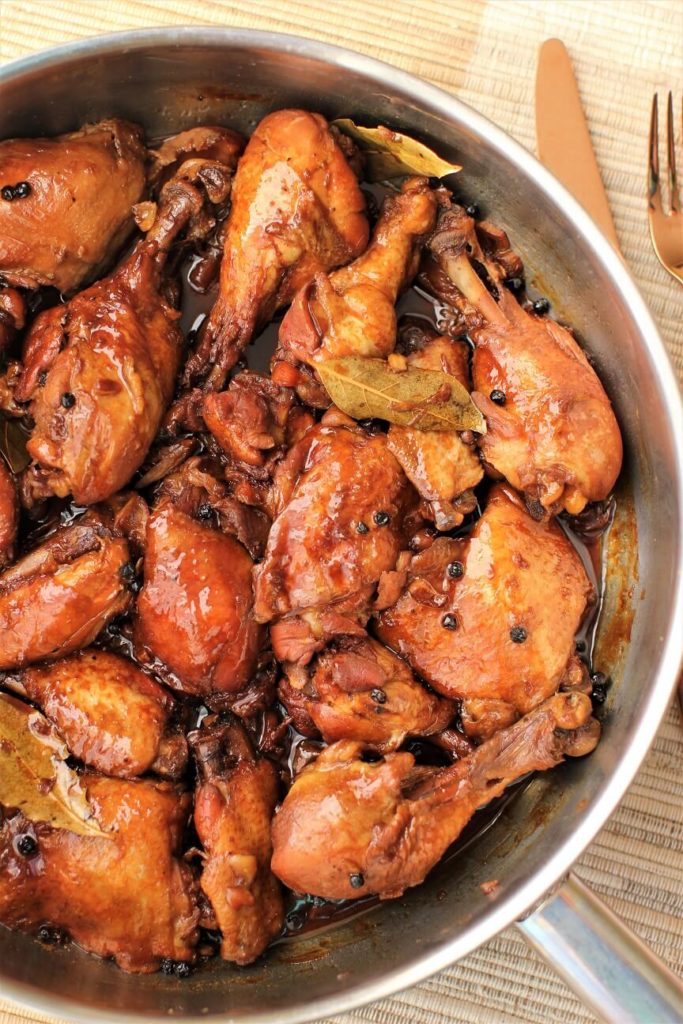 I love learning things from guests in our home. In fact, it's often a mandatory (though totally unbeknownst to them) condition of their stay with us. I chip away at unsuspecting guests, constantly steering the conversation to food and picking their brains for favourite dishes from their personal repertoires, family traditions, or culinary history. I have to be crafty. Not everyone is as interested in food as I am, but when I find one who is . . .  lucky me. I love talking food and get great pleasure learning new tips, tricks, or recipes from friends. It's a huge score for me (and secret bonus points for them) if I can finaggle a recipe that becomes a winner in our household, too. I can't resist doing a foodie happy dance.

This recipe is one such win. Our oldest son has been staying here with his friend, Jeff, for a few weeks, as they work on their online business from home before they head off overseas to work in Bali for the next four months. It has felt so good to have a busy household again, and Jeff has been an ideal guest because he's let me pick his brain with food talk (and he cleans up after himself!) We got to talking about one of his favourite comfort foods; his father's adobo. Jeff's father is Filipino, and he makes this beautiful, basic chicken adobo several times a week, cooking it up in the morning, and eating it later in the day. The family never gets tired of it. (I can see why!)

I was keen to get the recipe.

Years ago BK (Before Kids - so that was a few!) I spent Christmas in the Philippines visiting my sister who lived there for a year on a student exchange. What a fantastic trip! I stayed with her host family in Manila and experienced a wonderful Filipino family Christmas. I have fond memories of adobo, but had never been able to duplicate that tangy flavour to my memory's satisfaction. Maybe this would be it.

Jeff says he's watched his dad make adobo many, many (many) times and has questioned his dad about the amounts, but  always gets a response in the lines of, You put vinegar in the pot, then add enough soy sauce so it becomes this colour. Add some garlic and pepper and bay leaves. Then you add the chicken and cook it 'til it's tender.

It seems the ratio of vinegar to soy sauce must be the secret. Looking up recipes online brought up ratios all the way from 2 parts vinegar : 1 part soy sauce to the opposite extreme of 1 part vinegar : 2 parts soy sauce. I'm sure every Filipino home cook has their own personal ratio. So that was no help.

I trusted in Jeff's instinct of his native dish, and we set about making it. After some experimentation we found that equal parts vinegar and soy sauce produced the flavour that he said was closest to his dad's adobo. Yes!

I could not believe how simple this dish is - only six ingredients - yet how full of fantastic umami flavour. The first pot of adobo we made was gobbled up in record time. That tangy, salty sauce infused into shining pieces of mahogany-coloured chicken with moist morsels of meat that fall off the bone as you eat them . . . well, it was pretty close to perfect. We scratched the bottom of the pot to spoon up the delicious sauce so we could drizzle it over the sweet coconut rice Jeff made to go with the adobo.

Yes, it seems like a lot of vinegar and soy sauce, but believe me - magic happens in that pot when the lid is closed. Trust me that it will all come together into the most amazing end result; a pot of unforgettable chicken adobo. 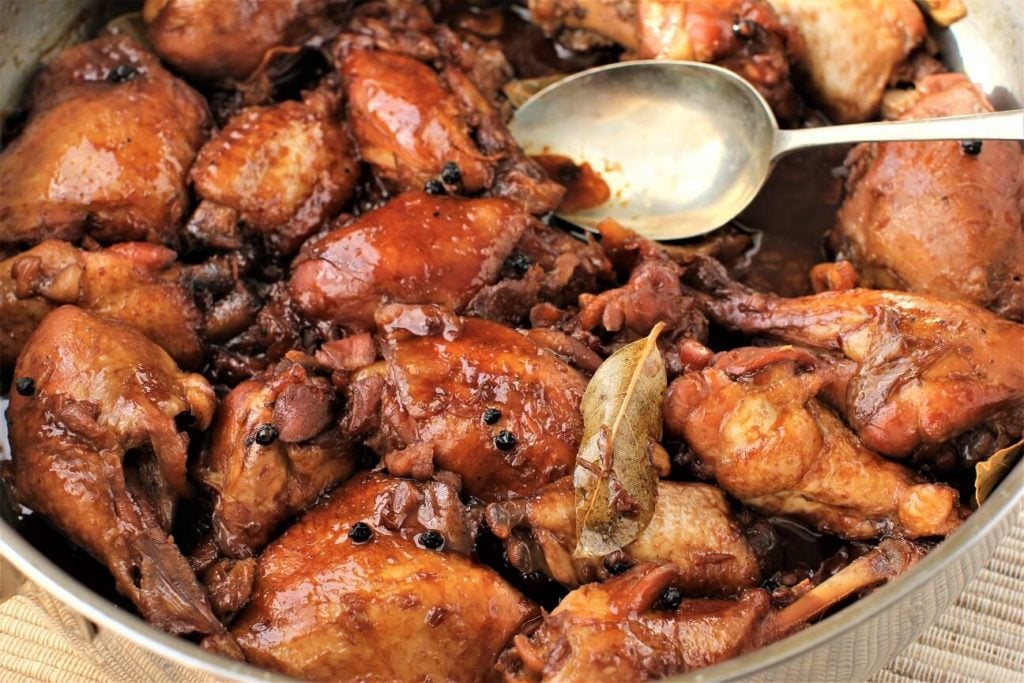 Let's Get Making this One Pot Chicken Adobo

All you do is mix the sauce ingredients in a pot. Heat it up a bit and lay in the chicken pieces (bone in, skin on, no need to brown them first).

Cook it all for an hour. Then remove the lid and cook some more until the sauce is glistening and reduced to your liking. Serve with hot cooked rice (or the delicious coconut rice below) or set it aside and reheat it gently later when it's dinner time (cover the pot with an old tea towel so nobody realizes what's in there and sneaks by for little tastes).

Jeff tells me he has inherited the Filipino superpower of knowing just how much water to add to make perfect rice. (I wish I had it.) He just rinses the rice and drains it. Puts it in a pot and adds enough water so that if you touch the top of the rice with the tip of your finger, the water comes up to the crease where your first knuckle ends. Voilà - perfect rice every time! Since I don't have that superpower, I need to measure my water, but I'm going to practice and see if I can acquire it, too.

We all need a superpower, right?. 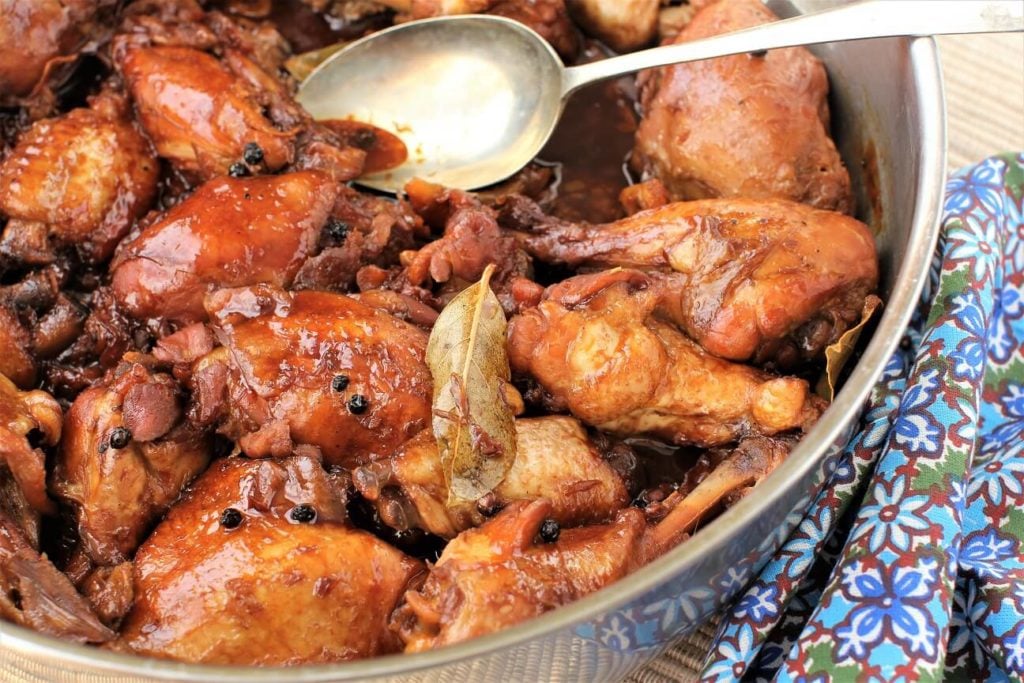 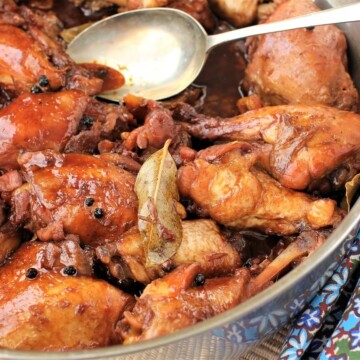 by Margaret Bose Johnson, Kitchen Frau
This easy one pot chicken adobo is so full of amazing flavour - yet it only has 6 ingredients (and no need to brown the chicken first)! Rich, burnished chicken pieces, saturated with flavour and falling-off-the-bone tender, are coated with a tangy sauce. Serve it with coconut rice for a special treat.
Print Recipe Save for Later
Prep Time 5 mins
Cook Time 2 hrs
Total Time 2 hrs 5 mins
Course Main Dish
Cuisine Filipino
Servings 4

For the Coconut Rice

To Make the Coconut Rice:

Use a medium or light soy sauce or a tamari soy sauce for this recipe; not the really dark soy sauce or it may get too salty after being reduced for so long. If you have a large enough saucepan, it is worth doubling this recipe while you are at it - you won't regret it! In the Philippines it is common to use either chicken or pork for adobo. Try this recipe with large chunks of pork, too. JUST A NOTE - when the adobo first starts cooking, you'll notice a strong smell of vinegar permeate your kitchen. Try to ignore it, because the finished dish is so worth it; the vinegar smell will eventually dissipate as the vinegar cooks off, and you'll be left with the unique, irresistible flavour of Filipino adobo. *I've made a double batch of chicken adobo in the Instant Pot electric pressure cooker. It worked well, but there was a lot of sauce and the chicken wasn't as beautifully browned (though it was tender and flavourful) as when it's made on the stovetop. I put all the ingredients into the Instant Pot and cooked it on high for 25 minutes, with a 15 minute natural release. When it was done, I removed the chicken pieces to keep warm and cooked the sauce down until it was reduced by at least half, then poured some over the chicken and passed the rest in a sauce pitcher.
Keyword adobo, adobo chicken, chicken, chicken adobo, Filipino, Filipino cooking, Philippines, pork adobo
Tried this recipe?Let us know how it was! 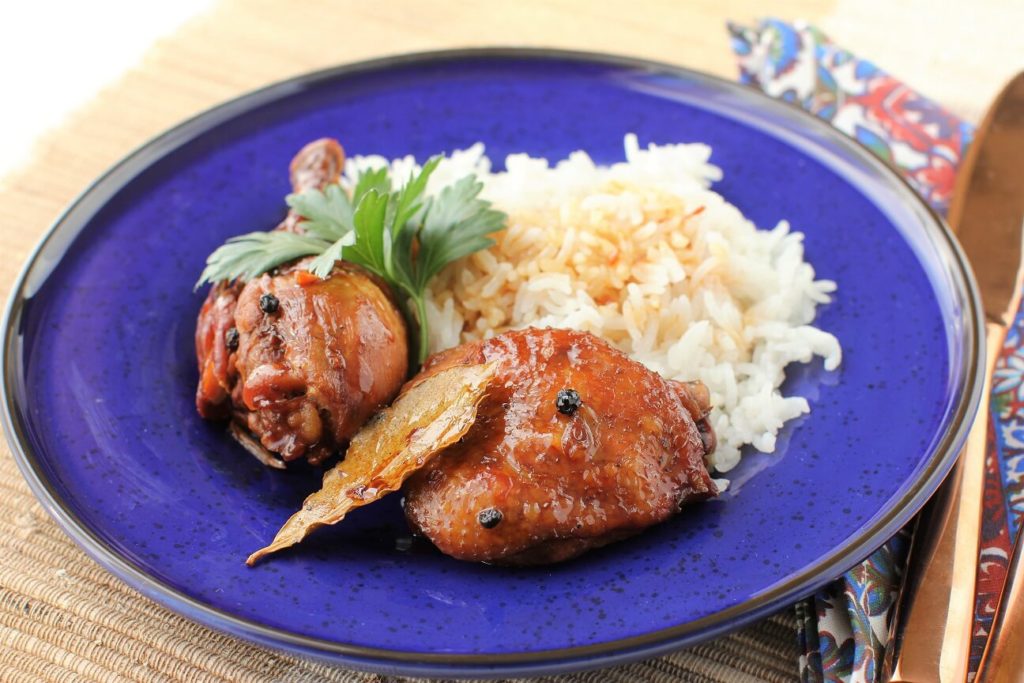 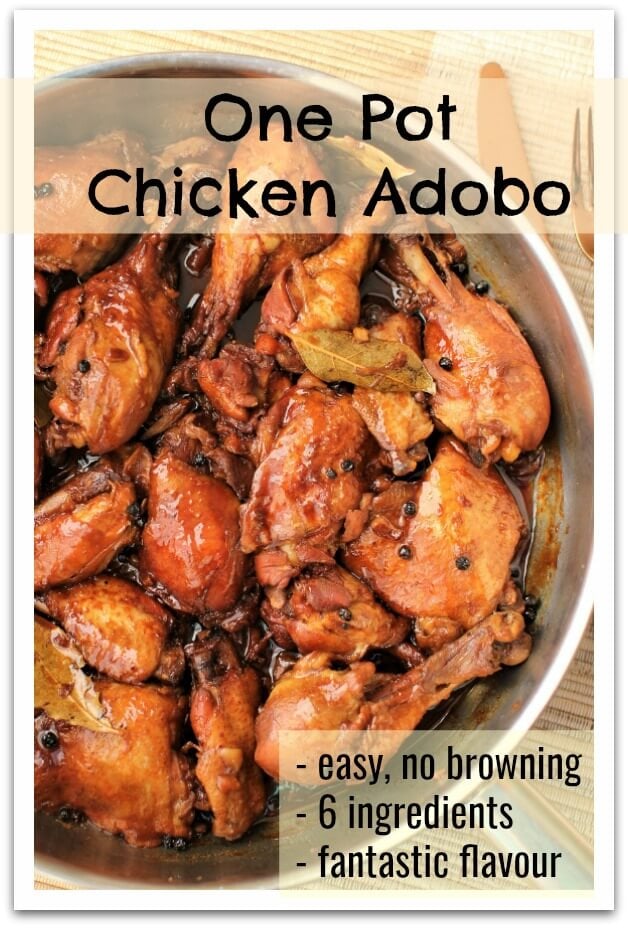 How to Cut Up a Chicken