Simple step-by-step instructions, with photos, for how to cut up a whole chicken. It's easy. And it's a useful kitchen skill to have. 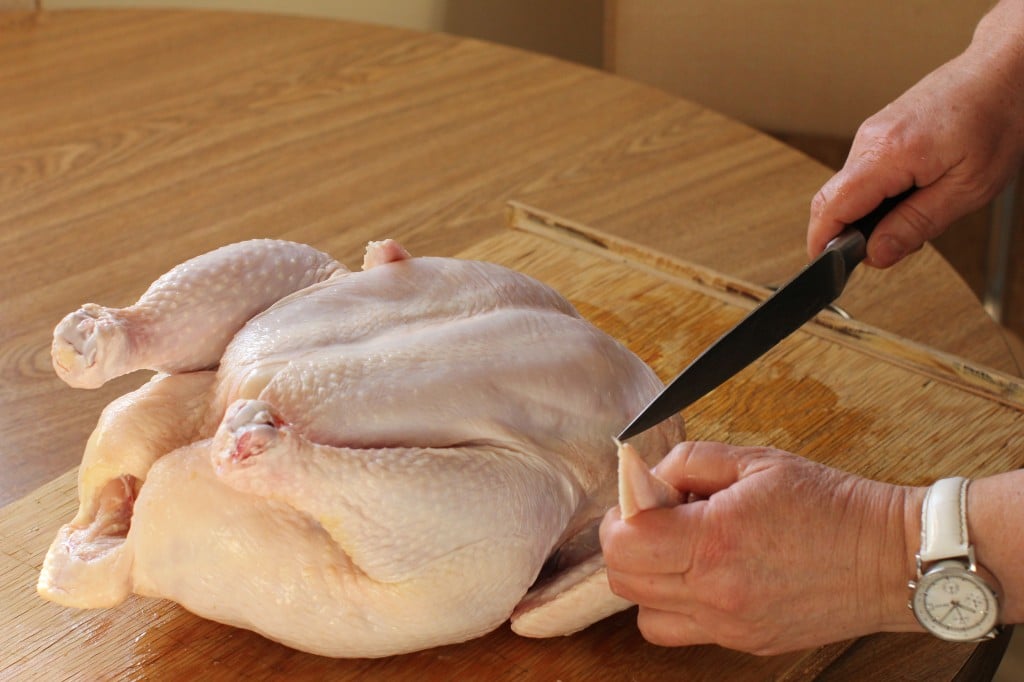 I was a chicken.

Thousands and thousands of hours spent in kitchens, and I've always been afraid to cut up a whole raw chicken. It's not that my mother didn't teach me. And it's not that I haven't had opportunities to do it, or was lacking the tools.

It's just that I was plain and simply . . . chicken. (Squeamishness about raw meat may have had something to do with it, but I wouldn't admit to that under oath.) So I've avoided poultry dismemberment as much as possible in my cooking career.

Every year I order twelve large, plump, beautiful chickens from a German woman who raises them naturally on her farm. They come cleaned and bagged, ready for the freezer. About once a month I roast one and we have a wonderful chicken dinner. I slowly simmer the carcass for a rich golden broth that makes a flavourful and aromatic homemade chicken soup. But if I want to fry chicken or make a chicken stew or a casserole, I sheepishly admit that I have to buy the pieces already cut up.

My mother-in-law is an amazing cook and an absolute wizard in the kitchen (I want to be like her when I grow up). But, she is slowing down just a bit (she's only 88 years old, so I can't imagine why) and suffers from arthritis in her shoulder. Margaret, will you cut up the chicken for me? she asked. What could I say? I swallowed, and said Sure, you just may have to talk me through it, though, since it's been a while since I've cut one up. (Small understatement - maybe even a small lie.)

So, with her expert coaching, I cut up a chicken. And it was easy.

Last weekend we visited again, and she asked me to cut up two more chickens. I said, Sure, absolutely no problem.

And it wasn't. I had those two chickens cut up in no time flat. (I'm a good student, you see.)

And I'm no longer a chicken about chickens. 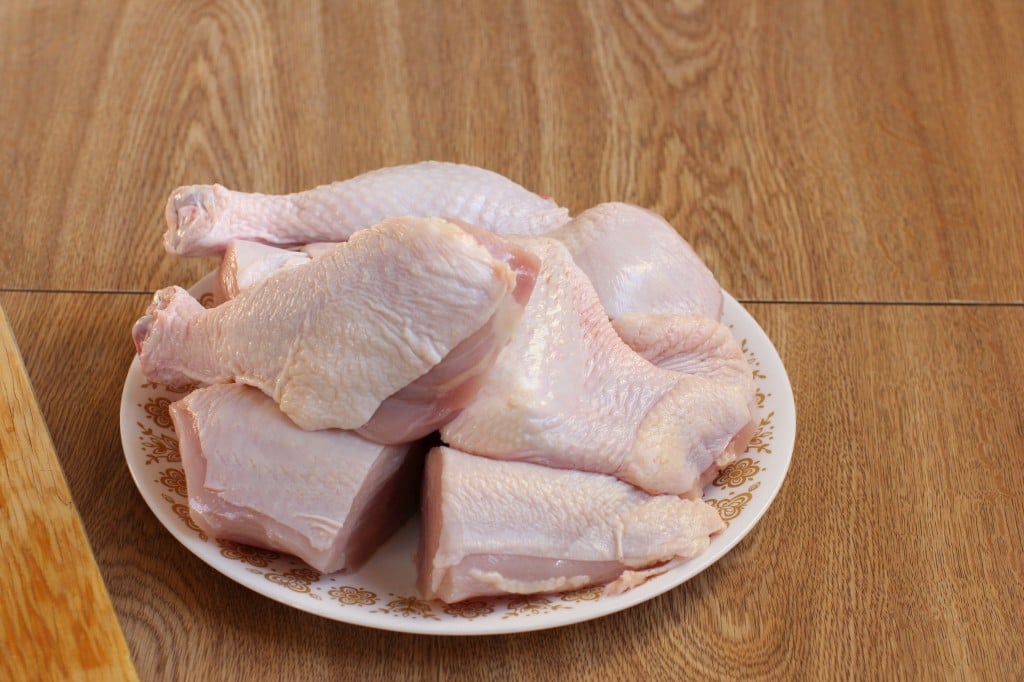 How to Cut Up a Chicken

Make sure your knife is sharp. (Dull knives can slip, and are actually more dangerous than sharp knives.) 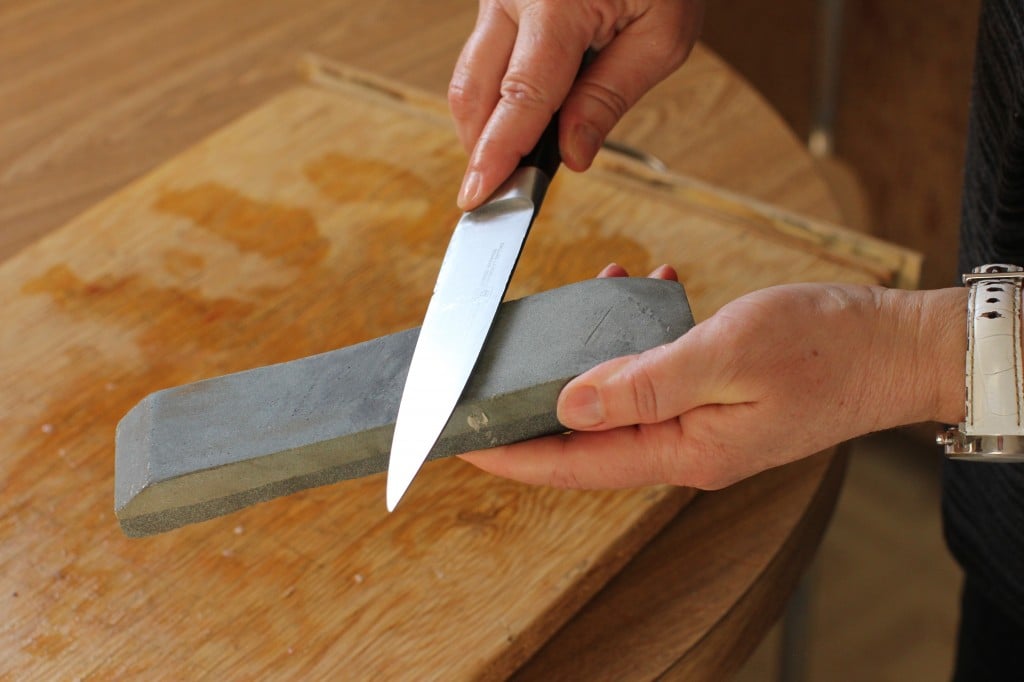 Lay the chicken on a cutting board with the neck end facing you.

1. Cut off the wings. With one hand, grab hold of the wing and pull it gently outwards from the chicken. With your knife in the other hand, make a cut into the skin around the base of the wing, feeling where the joint is and cutting through the socket space between the wing bone and shoulder joint. Continue cutting around the wing bone, cutting into the breast a bit to include a portion of breast meat with the wing (this is only fair to the wing-eaters, so they get a bit more meat with their tasty morsels of wing meat). 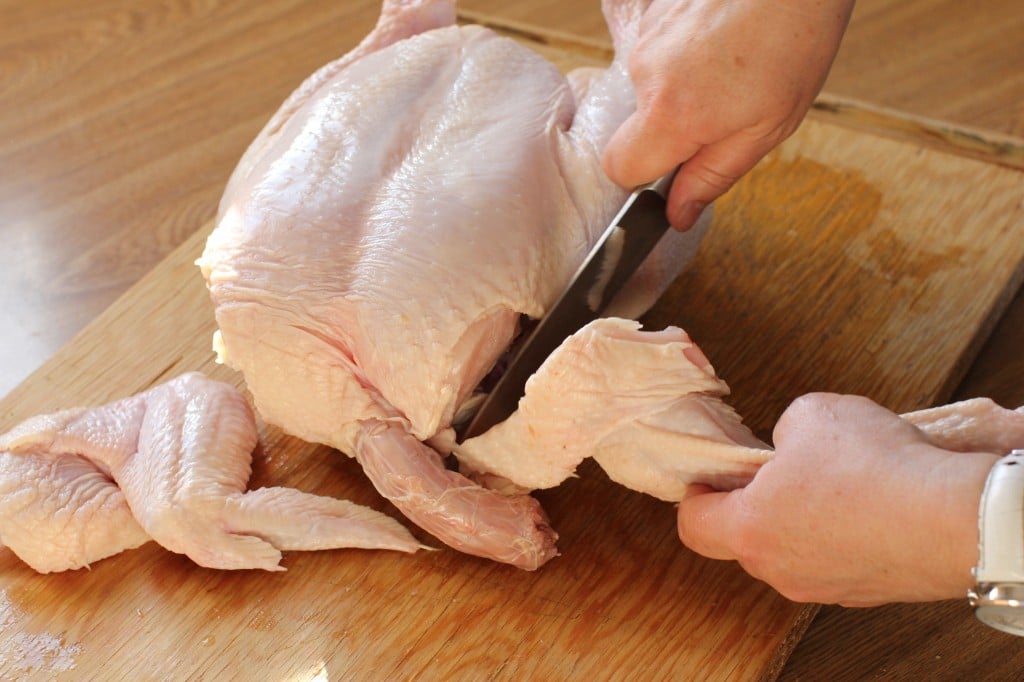 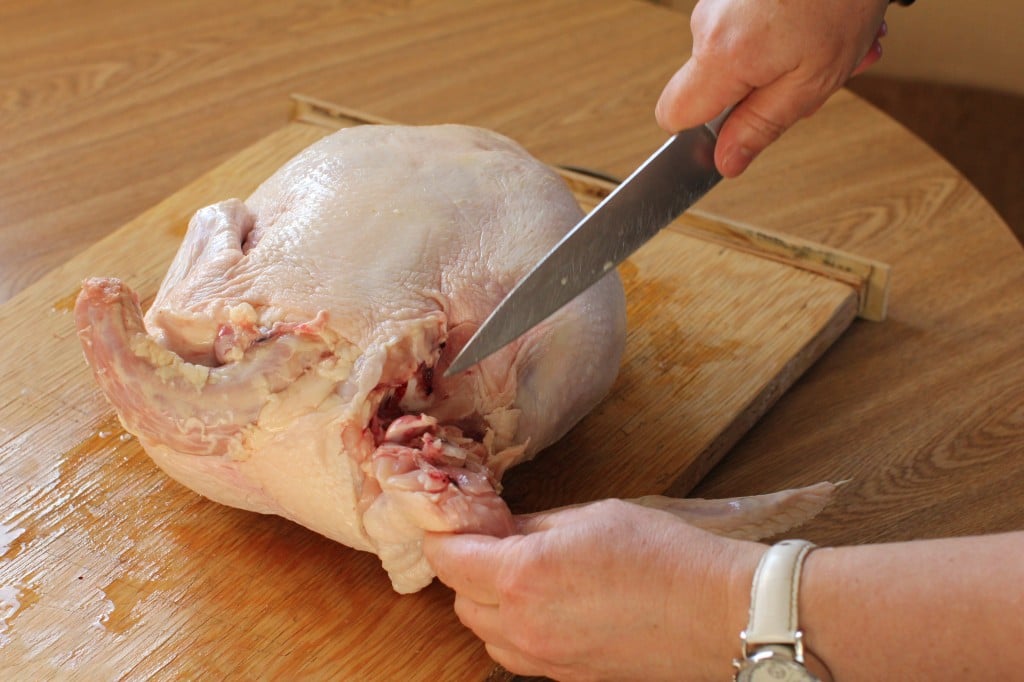 2. Cut off the legs. Pull the leg away from the body with your non-cutting hand, and with your knife in the other hand, cut the skin between the leg and body. Cut all the way around the leg, pulling gently on it so you can see where it separates. When your knife gets to the part where the thigh attaches to the body, you can pull quite hard on the leg, bending it backward from the body a bit. You will have to find the joint, like you did with the wing, and cut between it. Bending the leg back from the body, will pop the thigh bone loose from the joint slightly and make it easier to see where to cut. If your knife is really sharp, you may cut through some of the cartilage on the end of the bone, but that's okay. The leg will now be separated from the body. Do the same for the other leg. 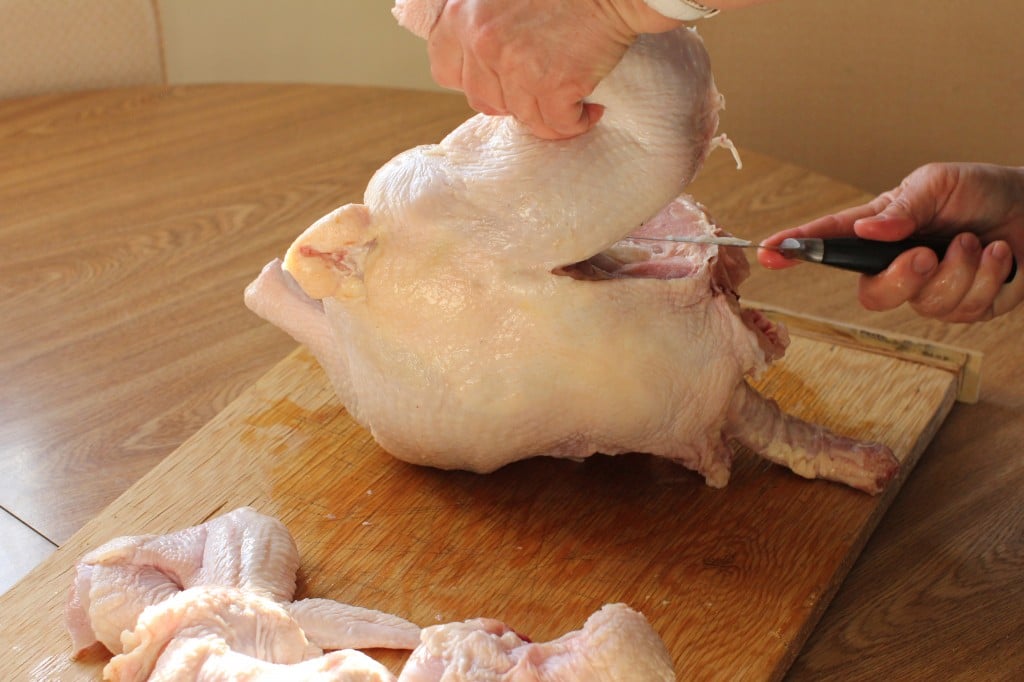 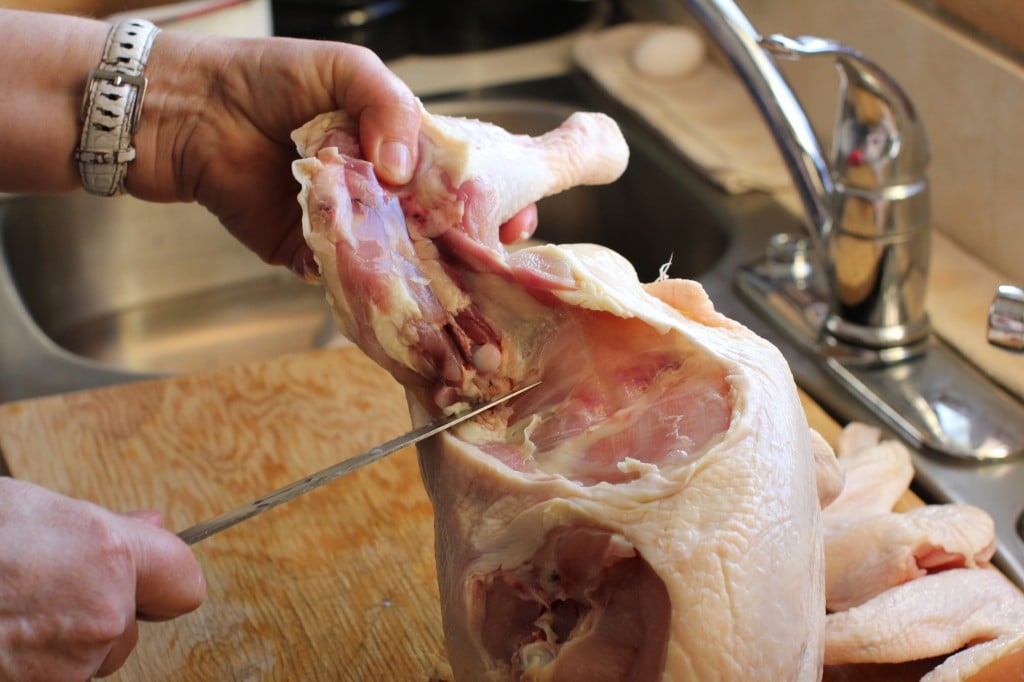 3. Cut the legs apart. Each leg cuts into two pieces - the thigh and the drumstick. Start cutting about in the middle of the bend of the leg, on the outer side. Cut down until you hit bone, then cut the flesh all the way around the leg. You will need to find the space in the joint again to cut through. Bending back the top and bottom part of the leg may help you find the joint easier. Cut through it and you now have two leg pieces. Repeat with the other leg. 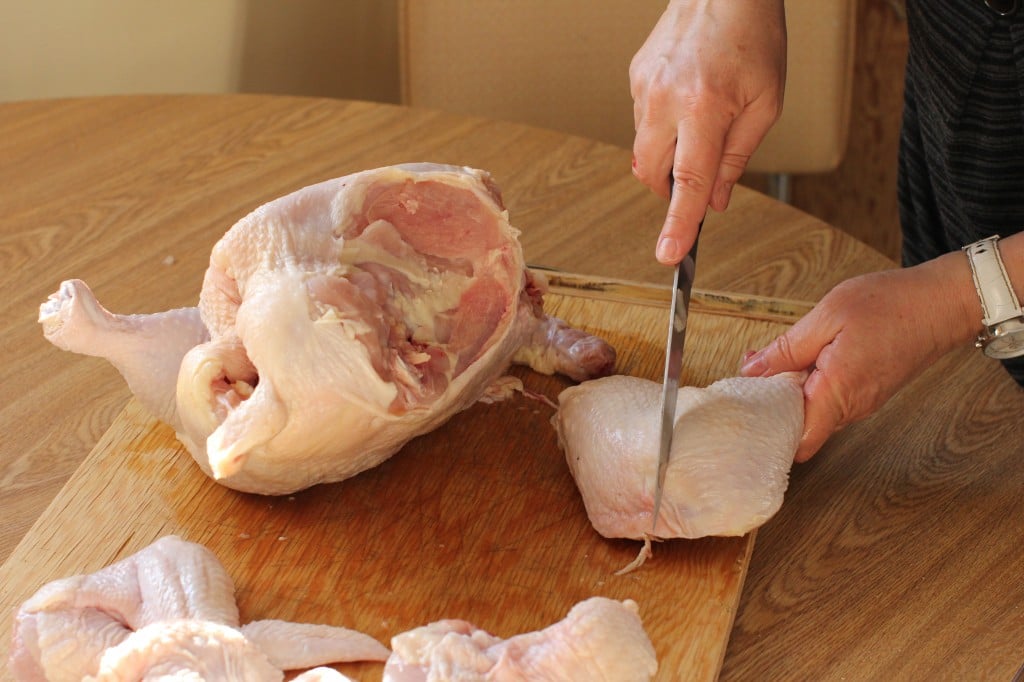 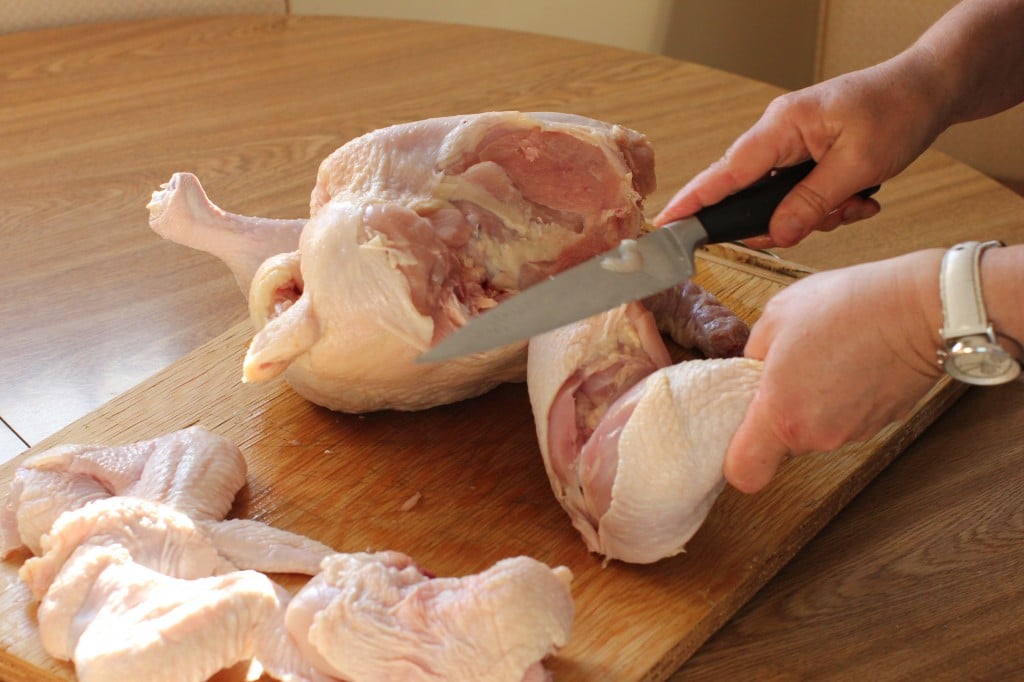 4. Cut out the 'wishbone piece'. Turn the carcass again so the neck end is facing you. Now imagine where the wishbone is situated. You will be cutting an inverted "V" into the chicken breast to cut out the wishbone, along with a nice portion of white meat. Starting at the center of the breast, about two inches in from the top, cut a diagonal cut down each side, toward the shoulder of the bird. Pull this away from the rest of the breast, and then cut through the joint at each side where the collarbone is attached to the breastbone. 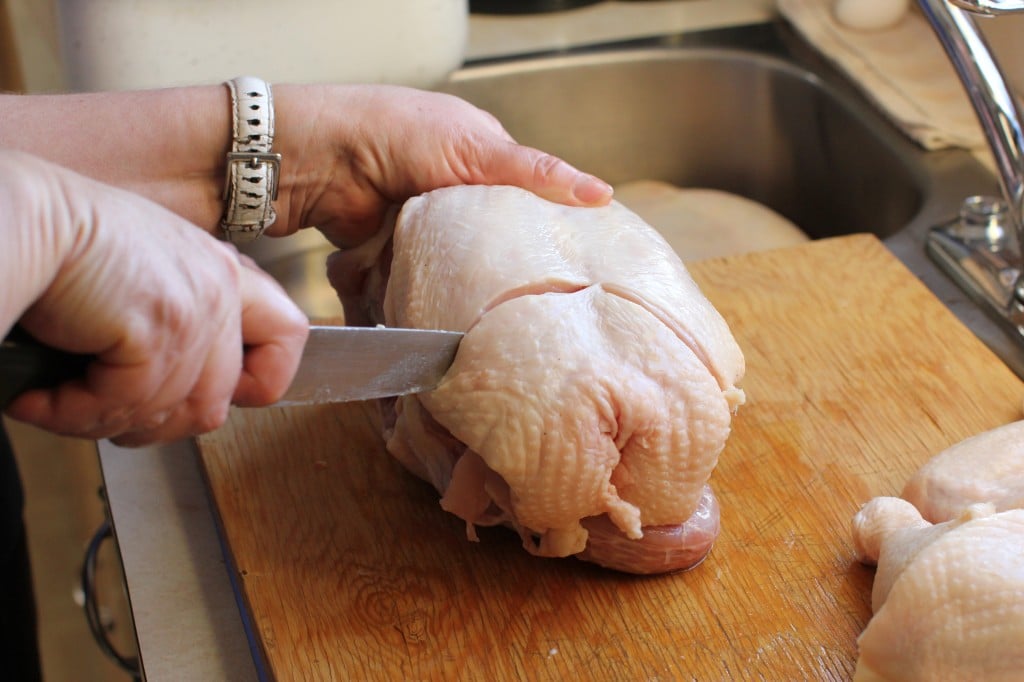 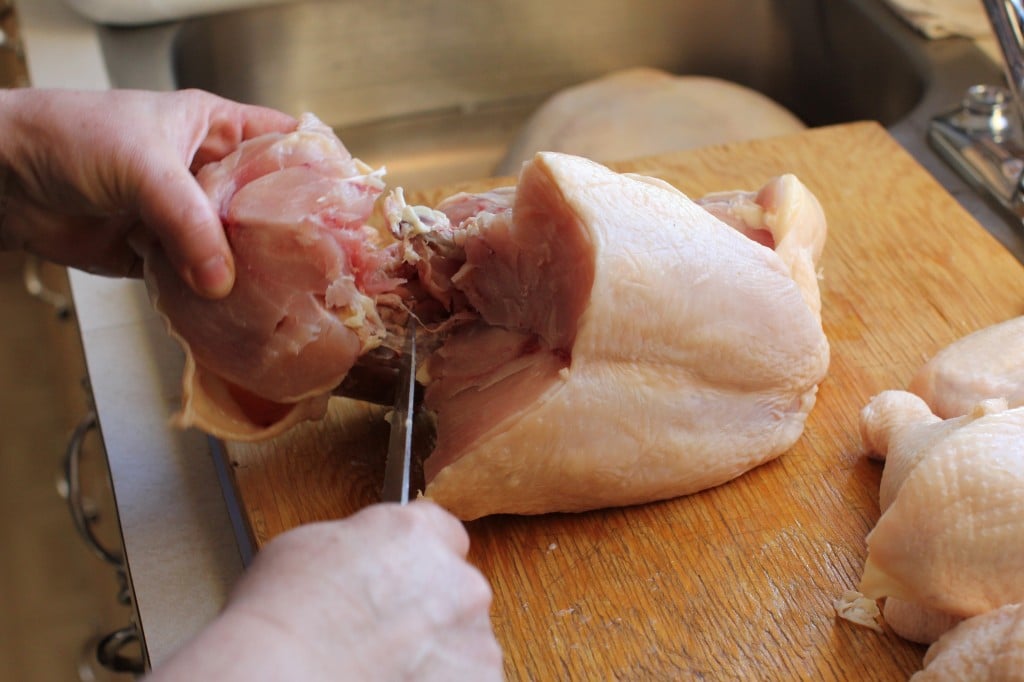 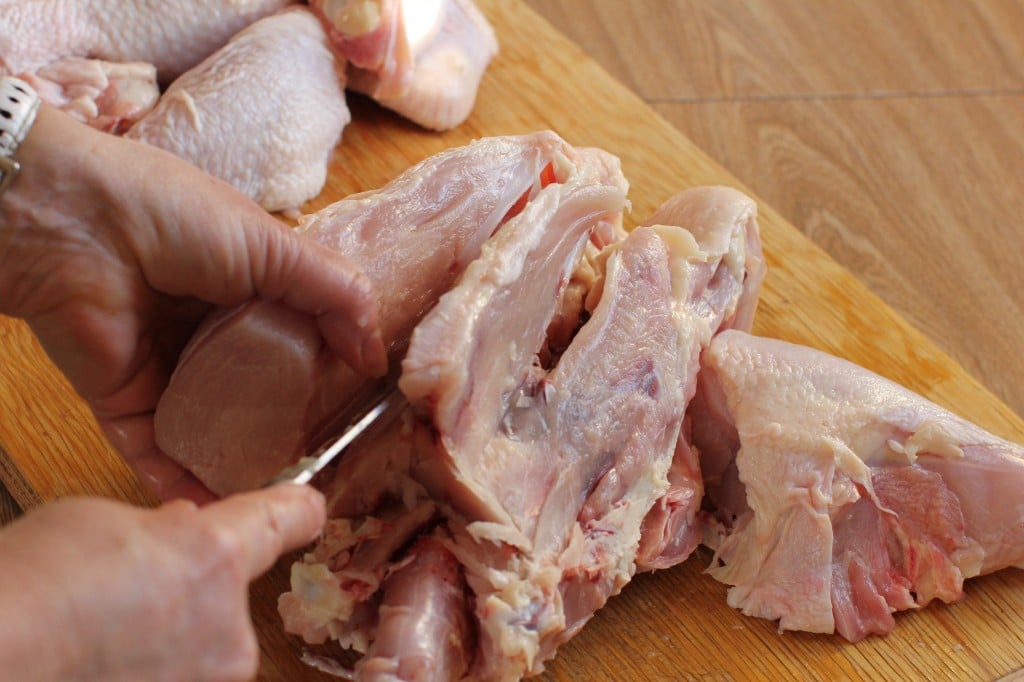 If your chicken is large, this piece should be cut in half across the middle to make two smaller pieces. You can choose to leave the skin attached or remove it. (You can also leave the breast half in one piece if you want to use it for another purpose, but if you are using the whole chicken to fry, it's a better size to make two pieces out of each breast half.) Repeat by cutting down the other side of the breast bone to remove the other half of the breast. 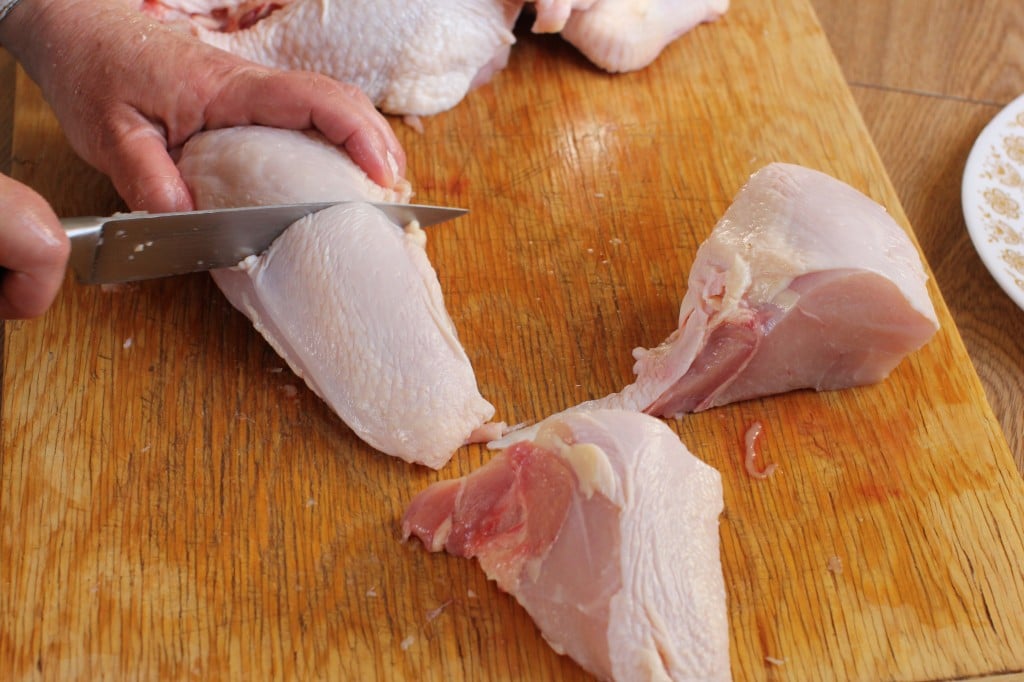 6. You will now have 11 pieces of chicken and the carcass (with neck attached) left. The carcass is more manageable and fits more easily into the soup pot if you separate it into two pieces. Do this by making a cut into each side of the rib cage about two inches deep. You will have to cut through the rib bones to do this, but if your knife is sharp this should be no problem. Then, holding one end of the carcass in each hand, bend it backward to find the place that it breaks naturally into half. 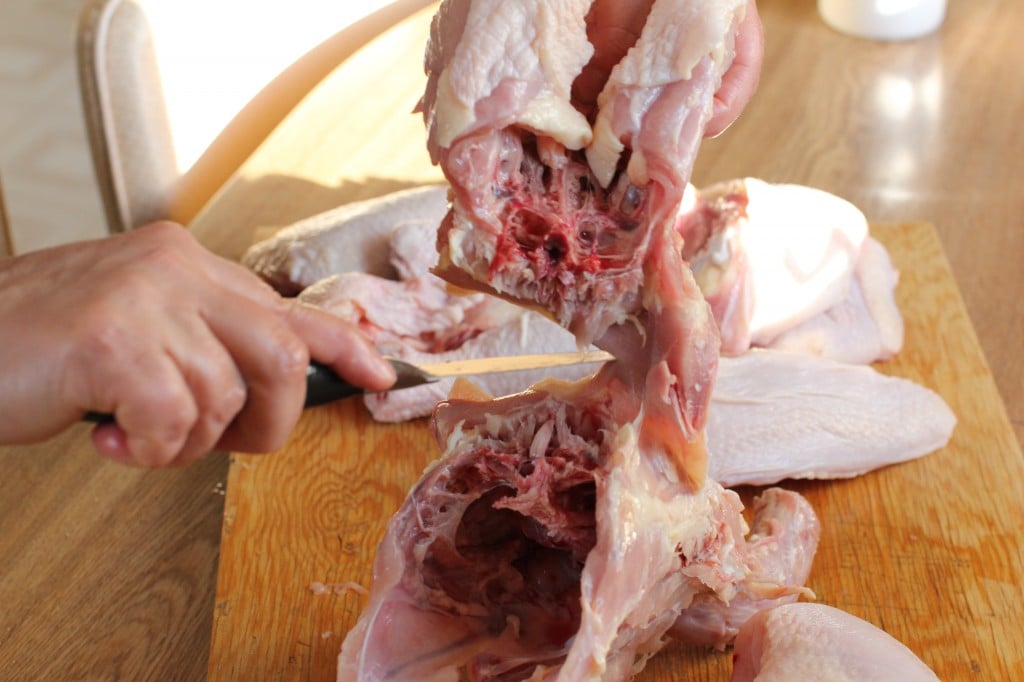 Use the knife to cut through the backbone at that spot. Freeze it now for future soup making or put into the soup pot and go for it.

No need to be a chicken about chickens any longer. If I can do it, you can do it!