Jerk chicken is coated in a blend of zesty spices, grilled to perfection, then slathered with a sweet, hot, and tangy sauce. It’s tender and juicy, smoky and spicy. It’ll revolutionize your summer barbecuing experiences. Whip up a batch of the jerk seasoning, and you can have this Jamaican taste sensation any time you feel like it. (Skip to recipe.) 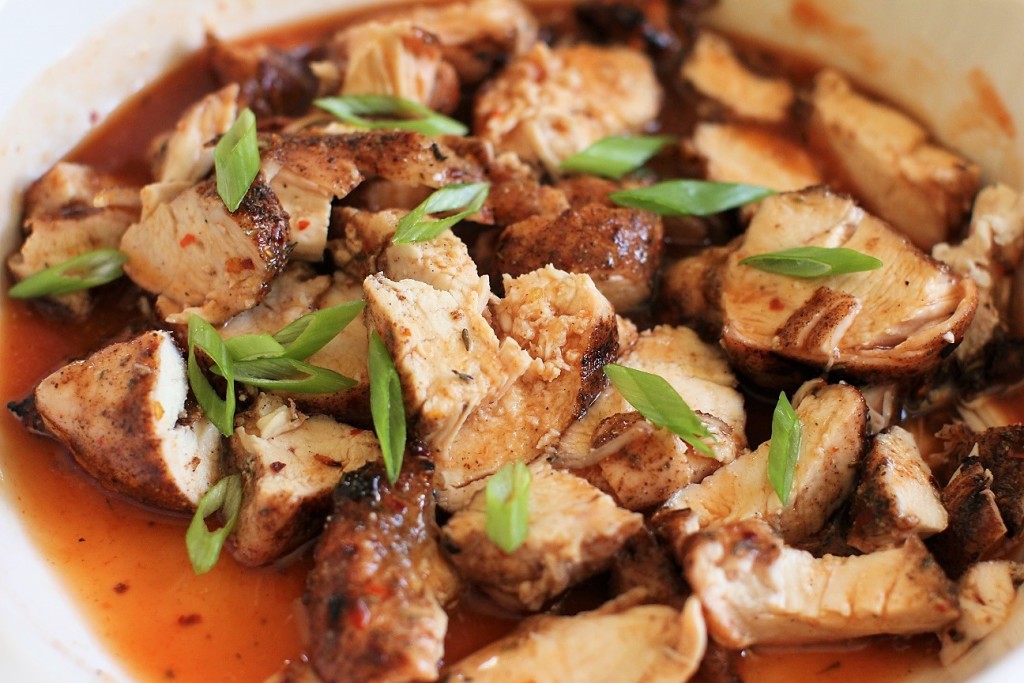 On our holiday in Jamaica, my sister and I slipped away one day to take in a Jamaican cooking class. It was a lot of fun. We took a shuttle from our resort to a former allspice and lime plantation situated outside the town of Ocho Rios. We rode a jitney throughout the 900 acre property, getting the chance to see a huge variety of native trees. 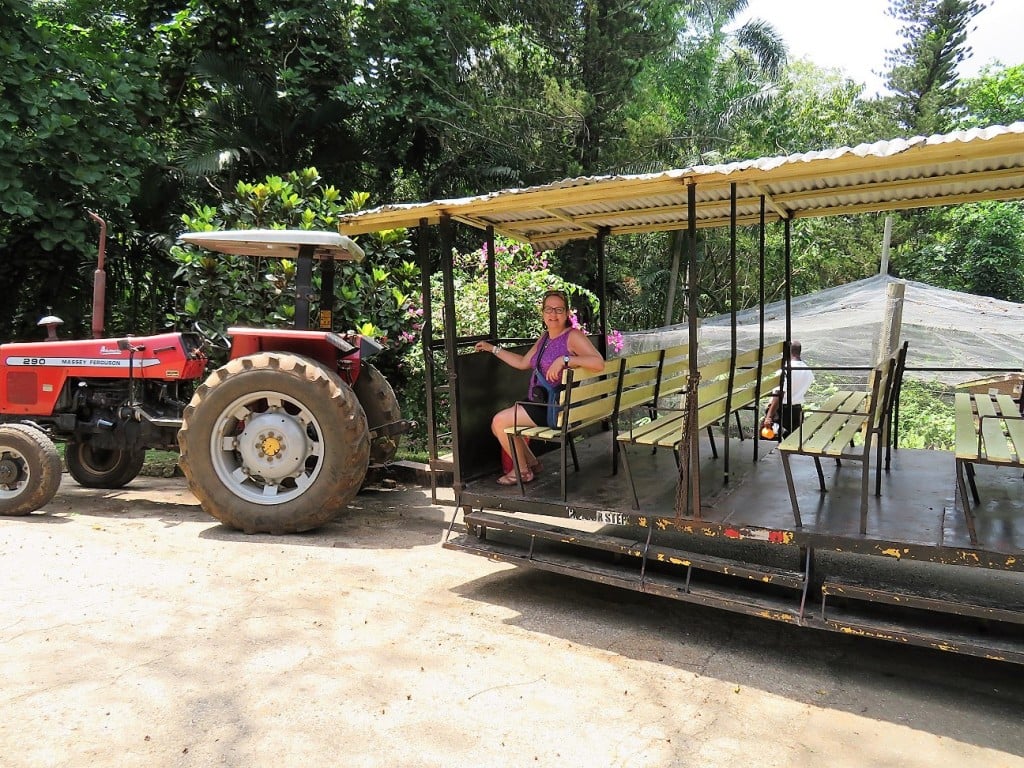 Our tractor driver, Donovan, entertained us with the history of the plantation and his dry sense of humour, cracking the funniest of jokes with a completely deadpan expression. 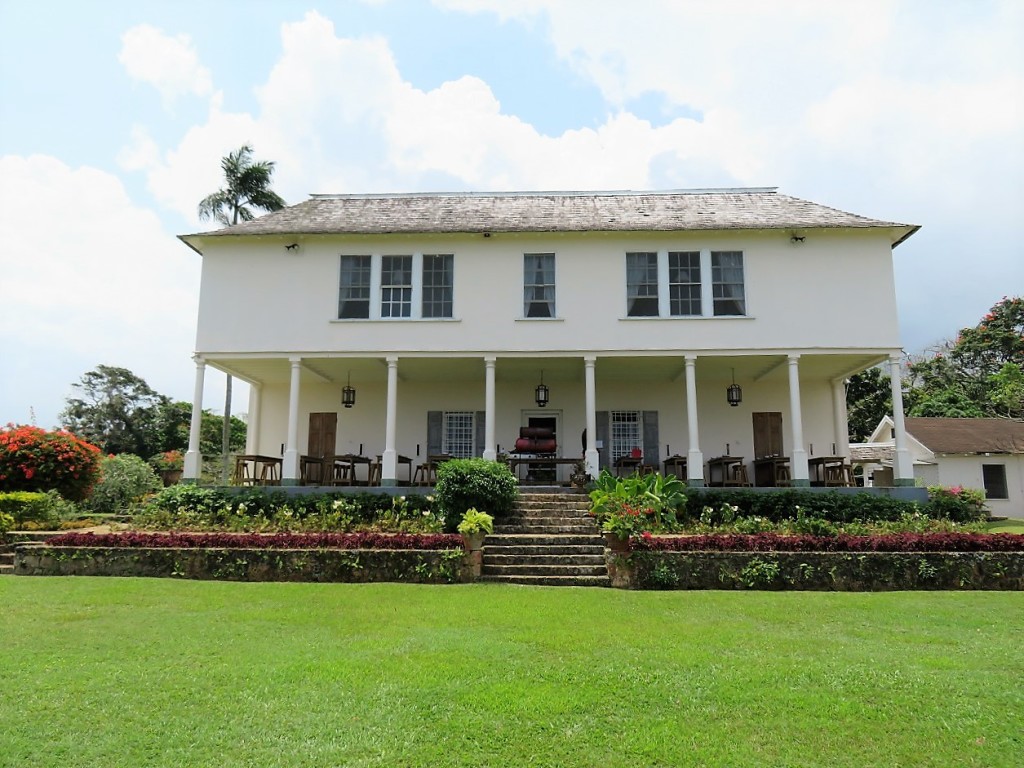 We arrived at the plantation house which is perched at the top of the hill and commands a breathtaking view of the panorama around it with the Caribbean Ocean in the distance. 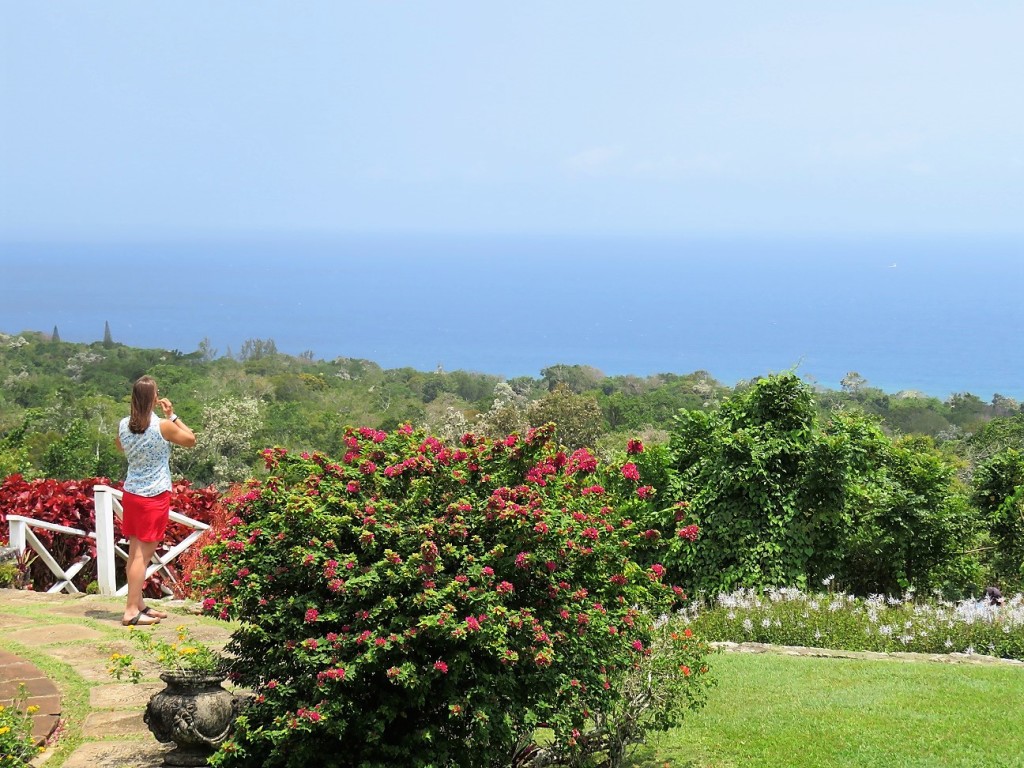 This plantation was once visited by many important people. Our former Prime Minister, Pierre Trudeau visited with his family, and his young sons (including our current Prime Minister, Justin Trudeau) played with the children of the plantation owners. Sir Winston Churchill planted the huge tree on the front lawn. Lots of Hollywood stars have planted trees along the main road leading up to the home.

The cooking class was set up on the veranda behind the house, overlooking the lawns and stunning view. Rosalinda and I were the only ones on this tour, so we had a private lesson from the lovely Chef Irie. She showed us how to prepare jerk chicken, along with sauteed callaloo (a spinach-like green) and coconut sauce, coconut rice, and festival (a favourite Jamaican deep-fried type of biscuit). 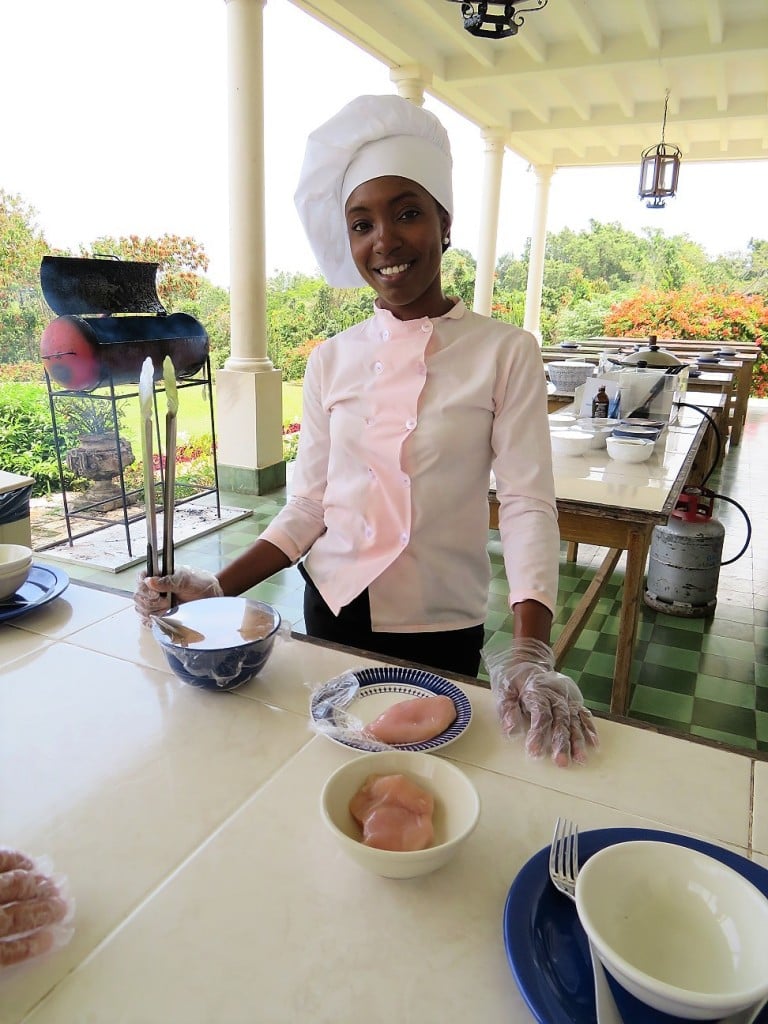 Chef Irie added a few pieces of allspice wood to the rustic metal-drum barbecue – this got it smoking like an old steam locomotive. 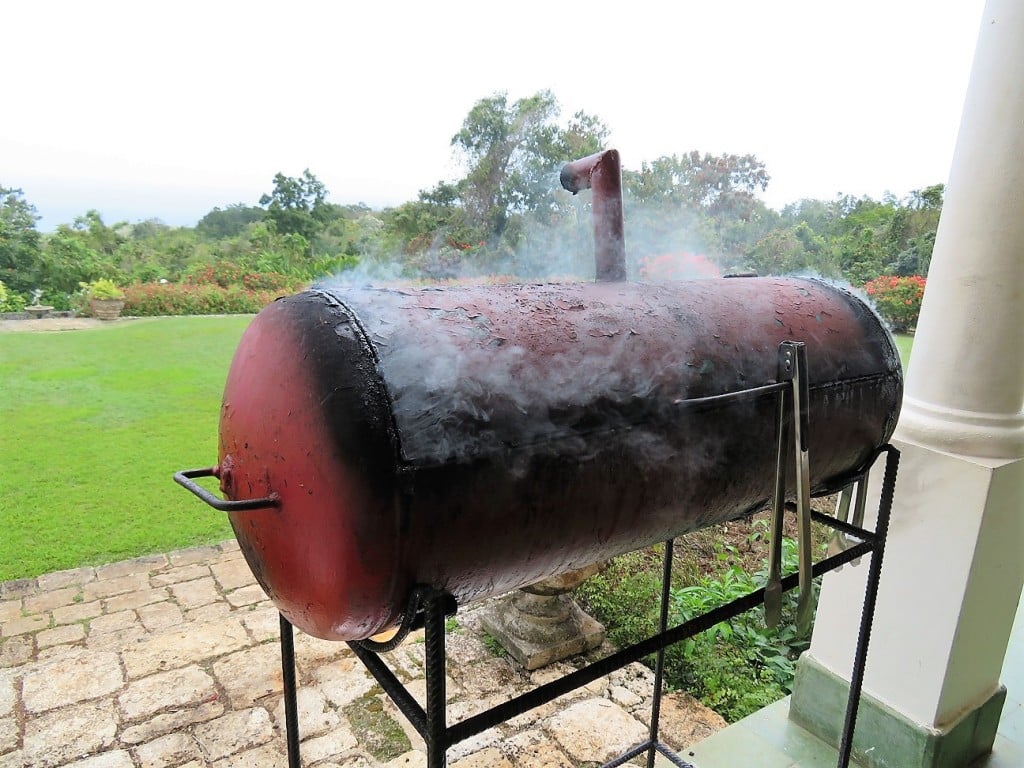 She gave us each a skinless, boneless chicken breast and a spoonful of jerk seasoning, so we could rub this spicy mix all over the meat. See my post on how to make your own easy jerk seasoning – if you make up a batch now, you’ll have the base for wonderful barbecues all summer long.

Jamaicans are famous for their Jerk – which is actually a cooking method rather than a seasoning. The original inhabitants of the island, before the advent of the African slaves and the invasions and subsequent colonization by the Spaniards and the English, used fire pits to cook their food. Highly seasoned and marinated meat was cooked long and slow over glowing coals of allspice wood, imbuing it with a smoky flavour. The outside of the meat is charred and spicy while the inside is falling-off-the-bones tender and moist. Traditionally, pork was the only meat that was ‘jerked’, but nowadays chicken and fish are popular, too.

We don’t usually cook in fire pits any more, and allspice wood isn’t to be found here in Canada, but we can replicate the flavours of that rich and spicy style of Jamaican cooking by making our own mix of the spices used on the island. In Jamaica, there are as many variations of jerk seasoning as there are cooks. I brought back four different packages of seasoning and each one is different, though they all contain hot pepper, allspice, thyme, cinnamon, and black pepper.

Allspice (called pimento in Jamaica) is one of Jamaica’s main export crops, and is used to flavour much of the delicious island cooking. The green allspice berry is harvested and dried, then used whole or ground in cooking. It is a rich and subtle spice, combining the flavours of cinnamon, clove, nutmeg, and black pepper. Using the ground allspice in the jerk seasoning mix is a good way to get the flavour you’d have from smoking the food over allspice wood. 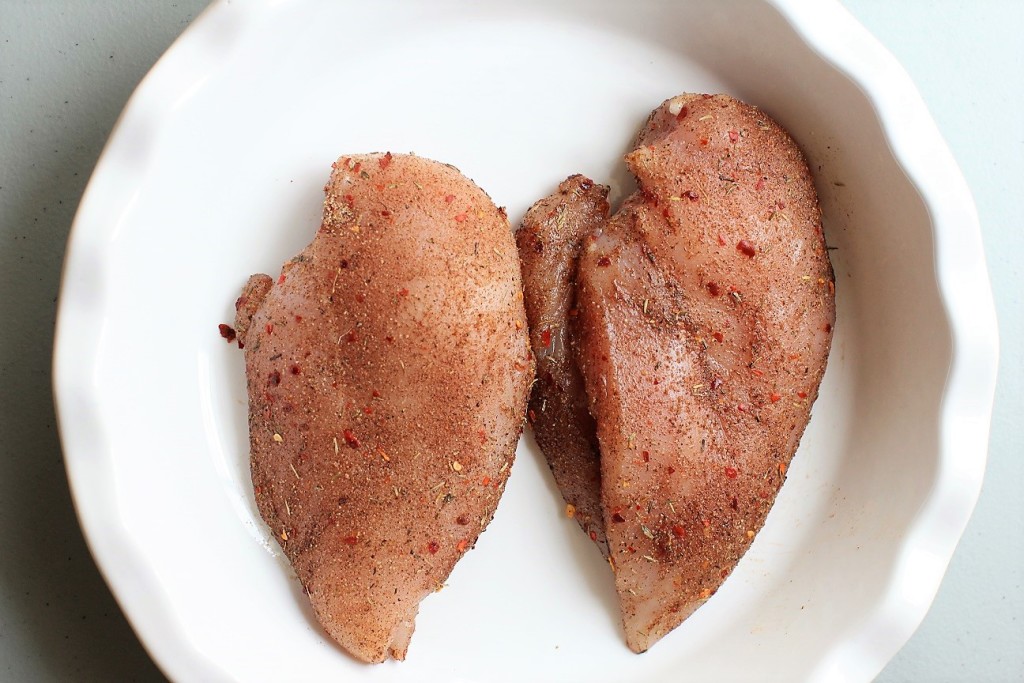 We put the chicken onto the barbecue, then Chef Irie added the secret ingredient – she sloshed on a bit of Jamaican beer – this adds flavour and helps make a bit more smoke, too. 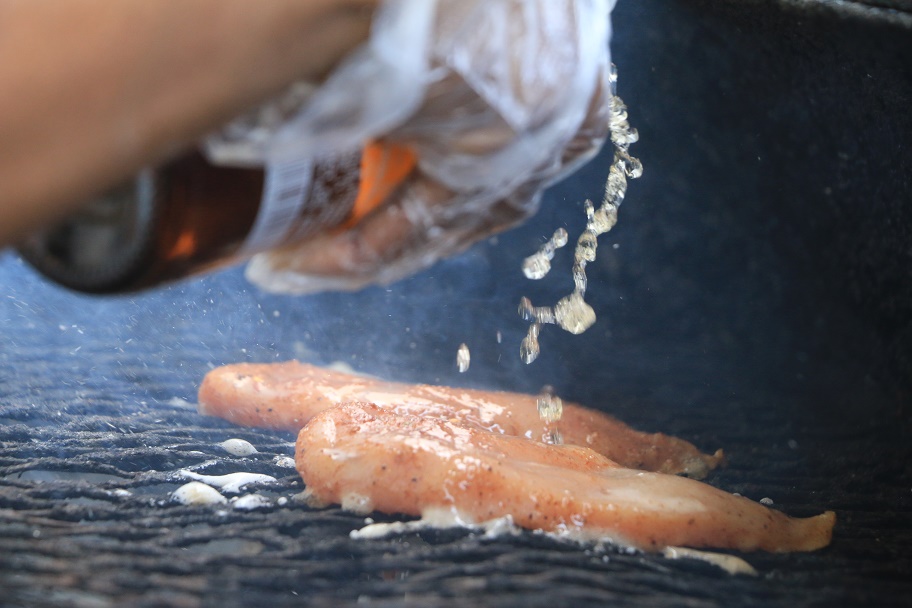 She closed the lid and let the fire and smoke do their magic.

Meanwhile we got on with the rest of the meal. We stirred together a simple sauce to add to the chicken later. Chef Irie had the ingredients all chopped for us: 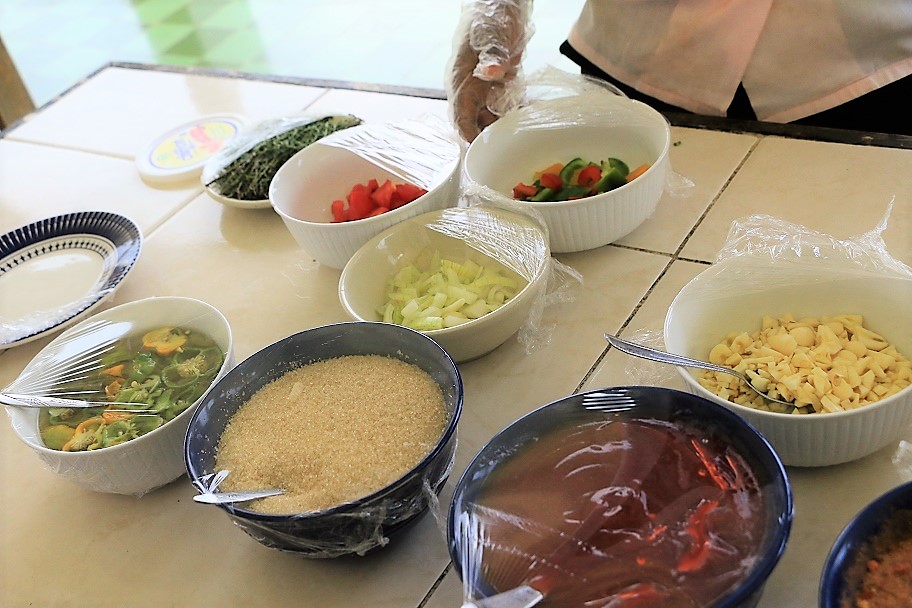 Leafy chopped callaloo went into the pan, along with a bit of margarine, onion, garlic, pepper, and a spoonful of jerk seasoning. 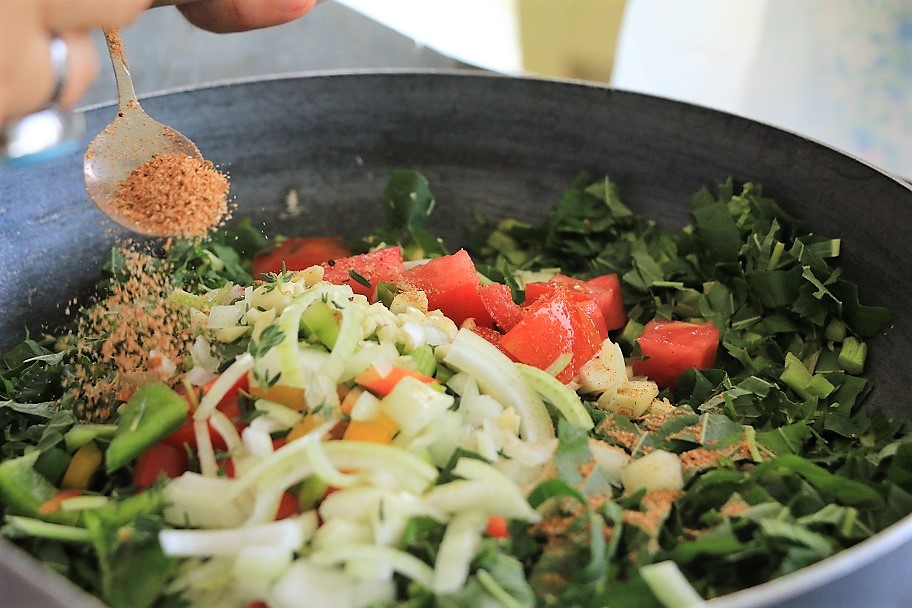 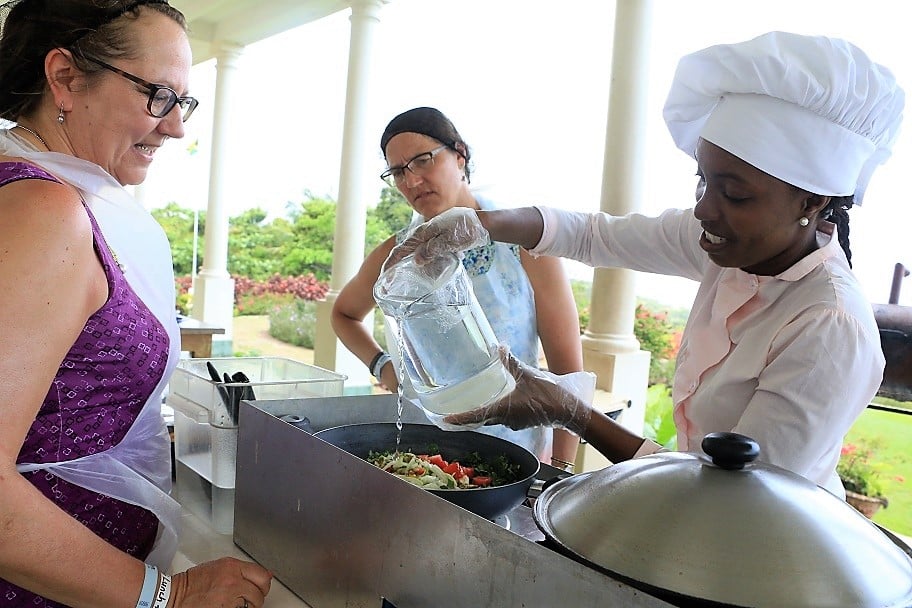 We whipped up a thick creamy coconut sauce to eat with the rice – made with powdered coconut milk, fresh thyme, onion, garlic, veggies and a bit more jerk seasoning (the secret flavour base that made everything sing). 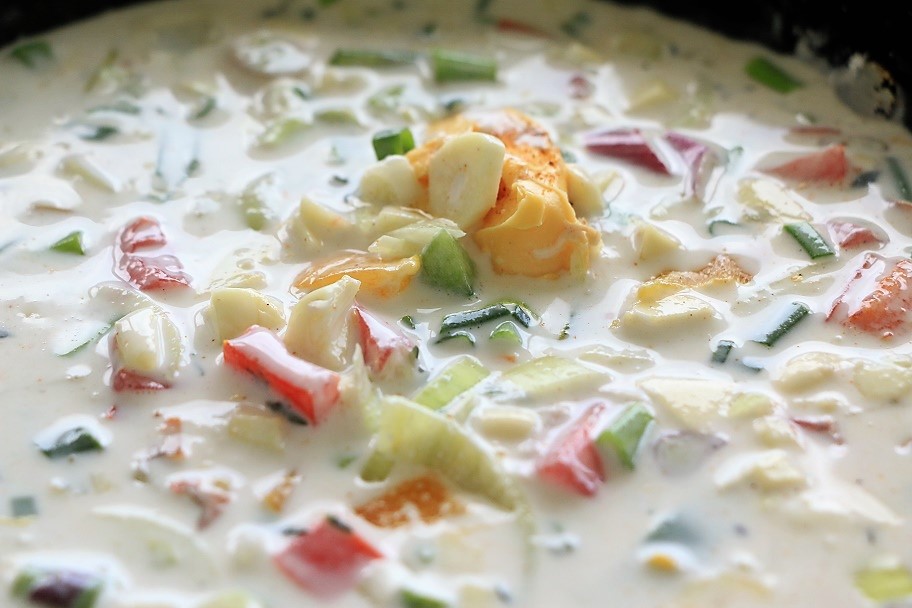 Next, Rosalinda and I rolled out the cornmeal-based dough for the festivals – kinda like playing with play dough. They went into the sizzling oil to fry up to crisp, golden deliciousness. 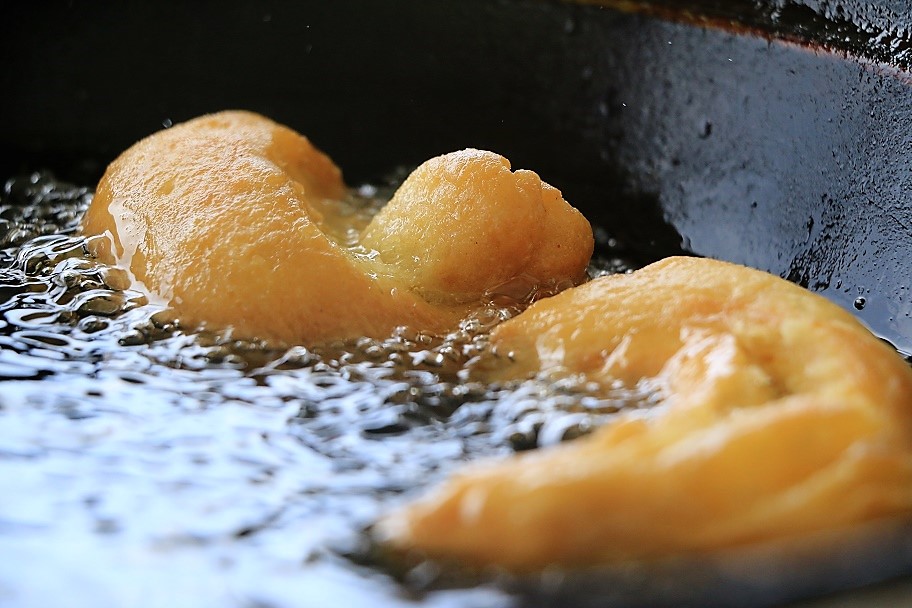 By then, our jerk chicken was done, smoky and tender and moist. 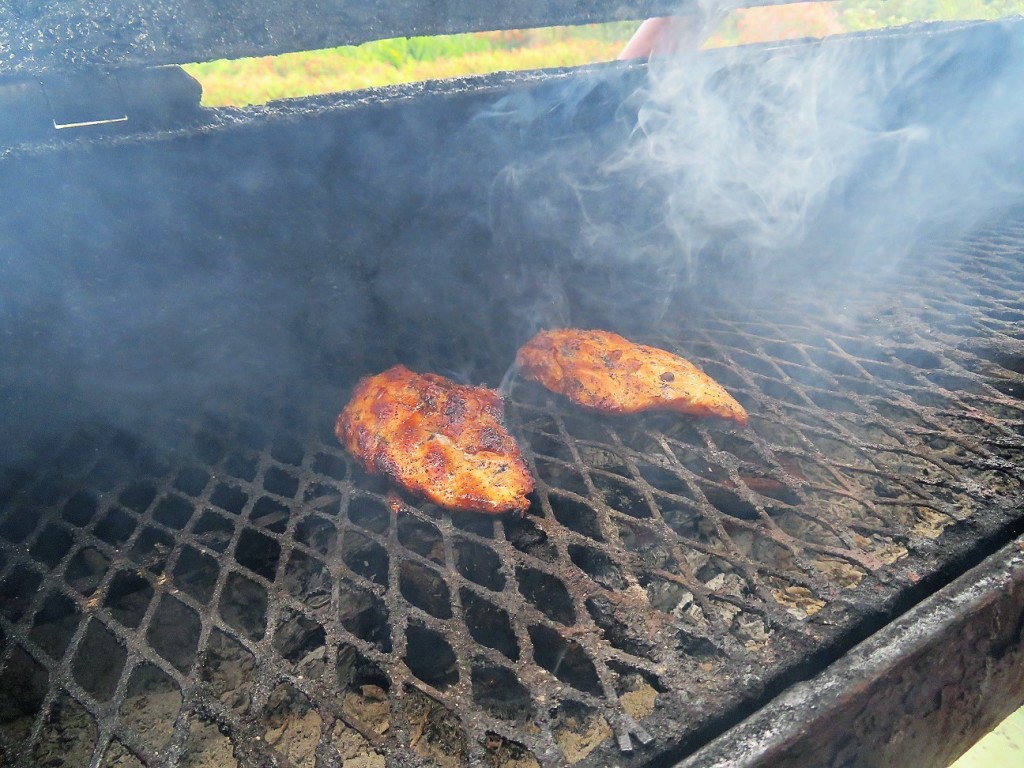 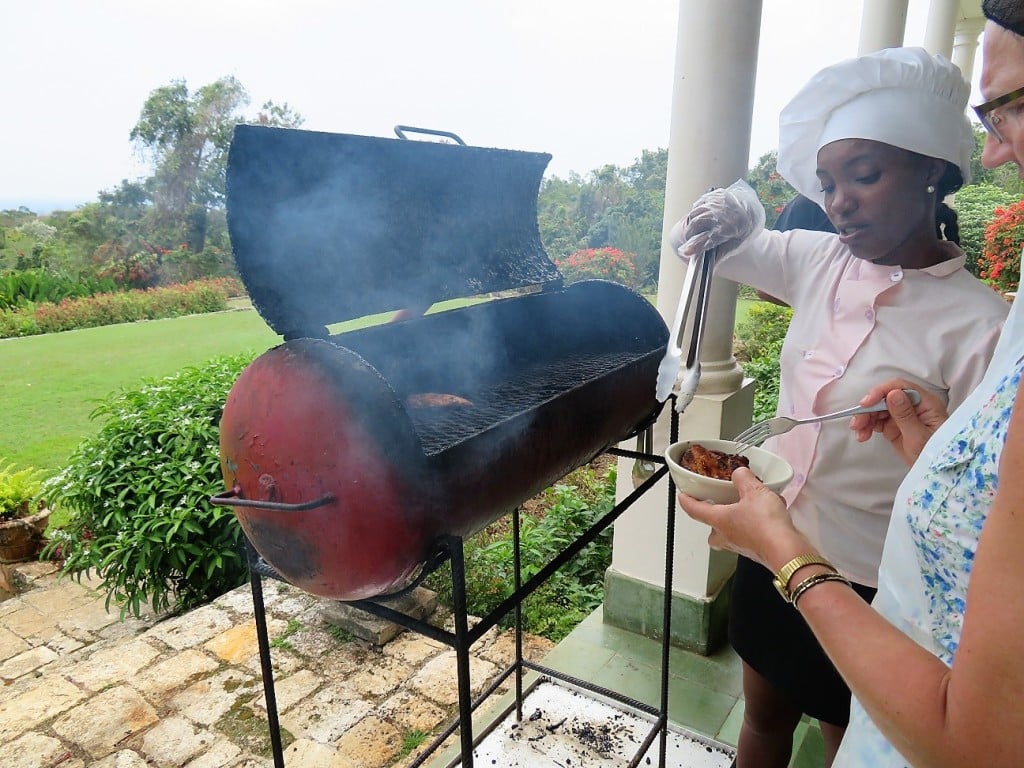 Chef Irie handled the grilled chicken into each of our little bowls of prepared sauce, and we diced it up, coating the pieces to make them glistening and moist. 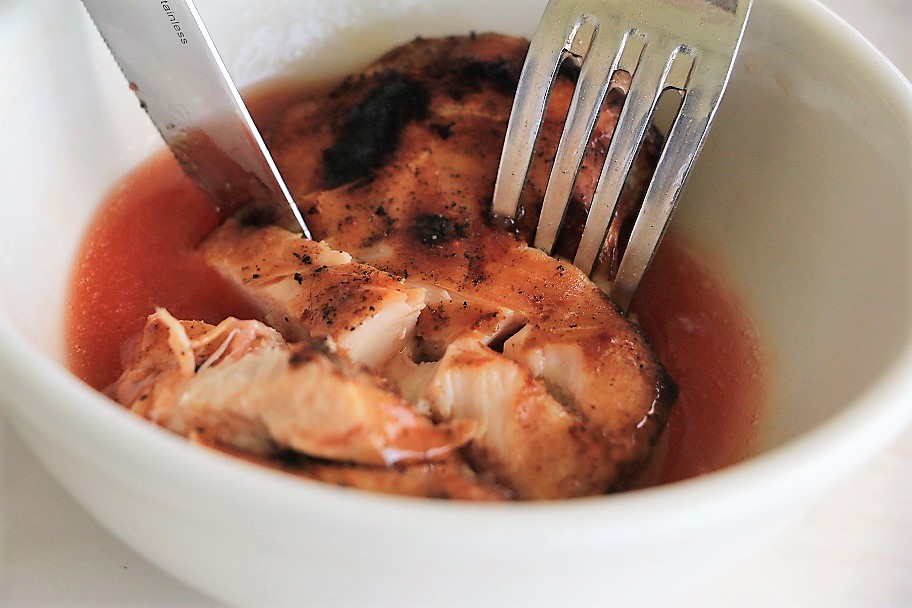 Voilà, our meal was ready. Tender, moist and spicy jerk chicken kissed with a slathering of sauce – sweet, sour, and just a little bit fiery. Tender greens sauteed with veggies – still with a slight bite and rich earthiness from the seasoning. Rice cooked in coconut milk and Maggi seasoning – a gentle foil for the flavourful coconut sauce – smooth, velvety, and a perfect vehicle for still slightly crunchy veggies – huge flavour from the onions, garlic, and seasoning. And of course, the festival – a crunchy fried biscuit encasing the soft doughiness within – slightly sweet, tender, and letting out little puffs of steam as you pull it apart. 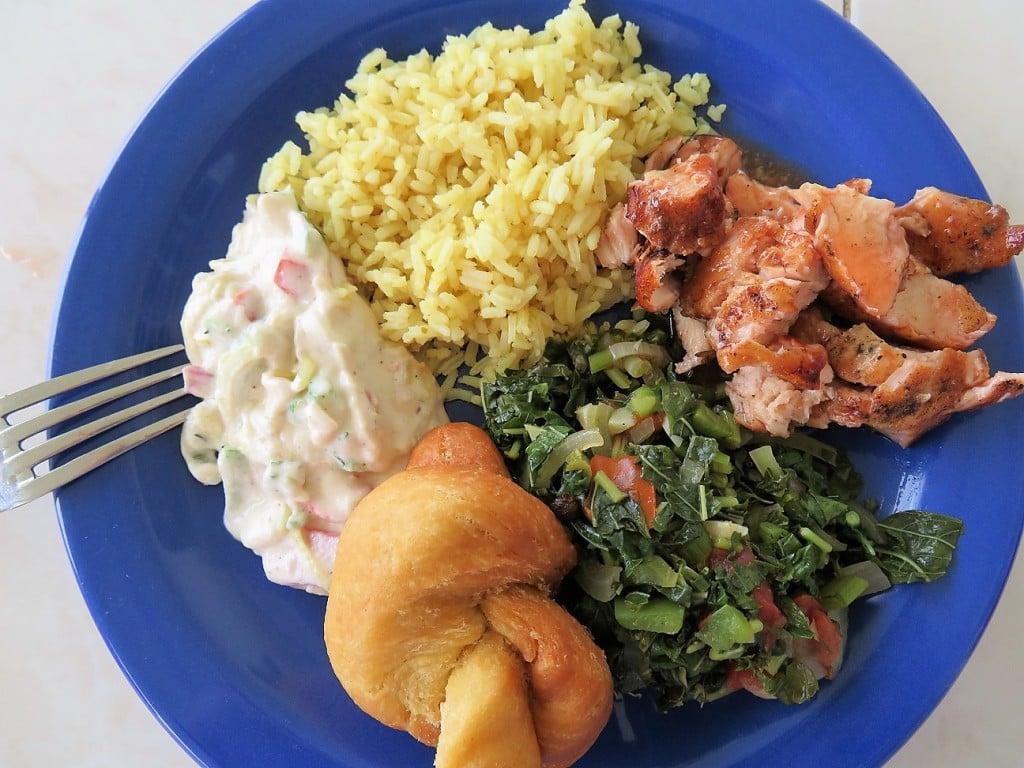 All we had to do was dig in. Yaa Mon!

Kitchen Frau Notes: Skinless, boneless chicken breast is what we used in the cooking class, however you can use any cut you like. Skin-on, bone-in leg and thigh work well; once the chicken is grilled, cut several slits deep into the meat, then drizzle with the sauce to serve. 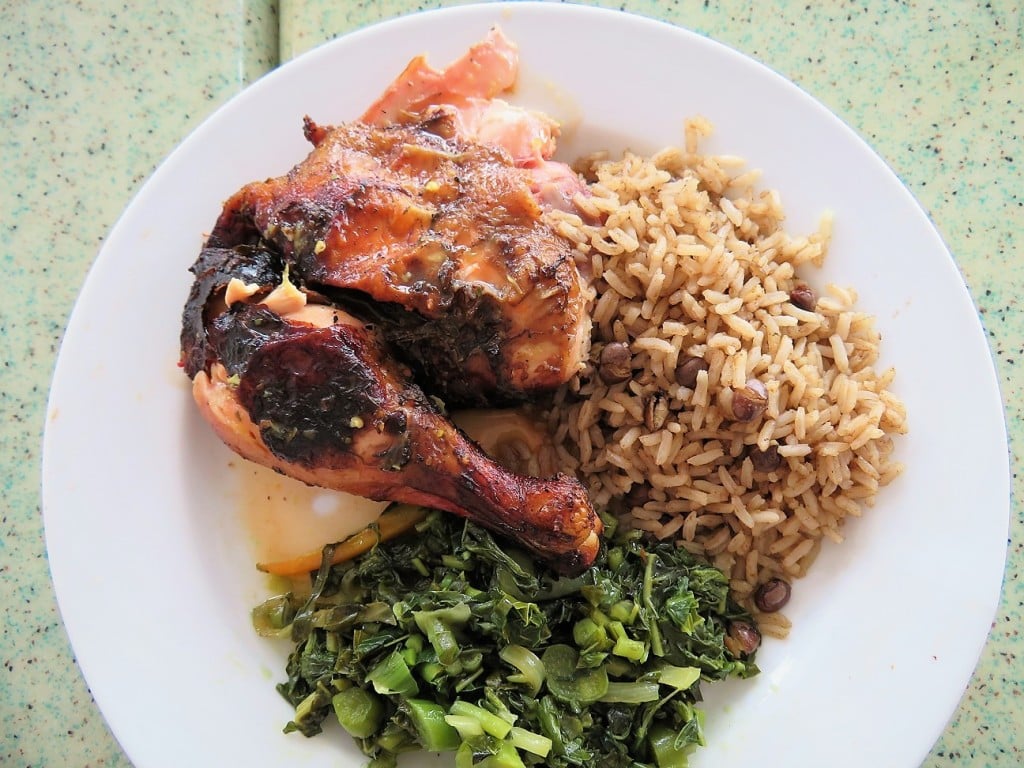 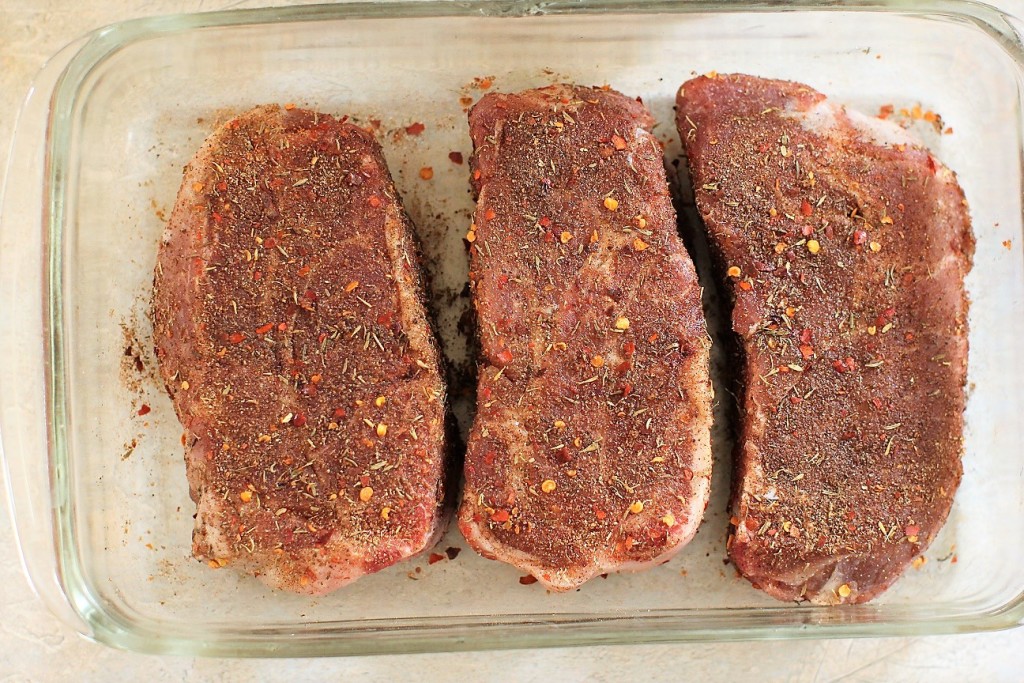 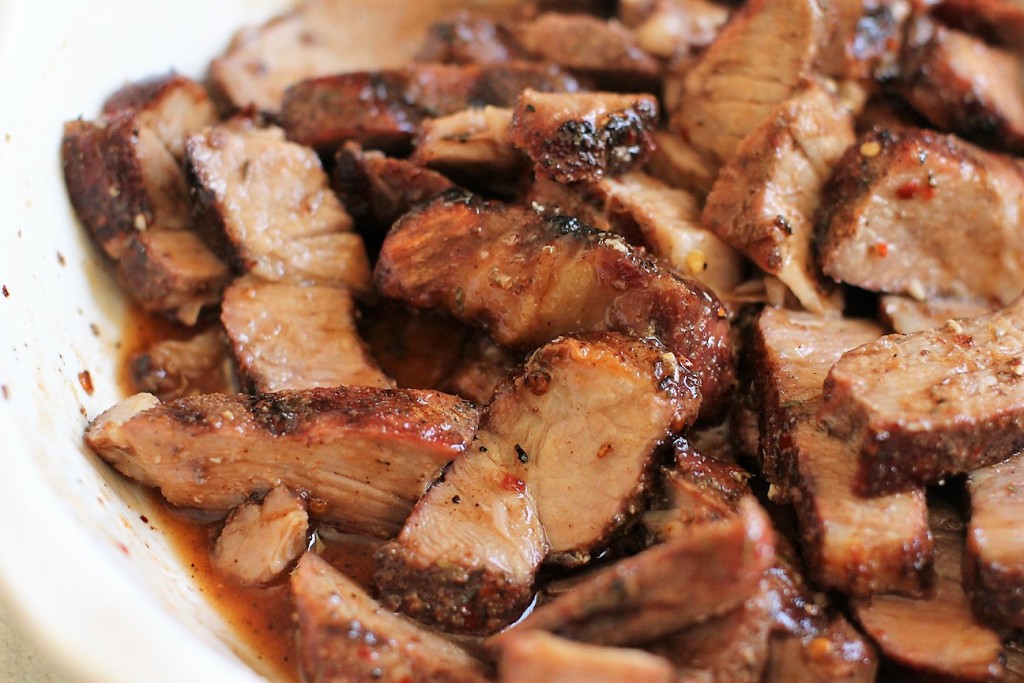 When making the sauce, you can also marinate sliced, fresh hot peppers (like Scotch bonnet peppers, which are the main peppers used in Jamaica) in vinegar for several hours, then use the spicy vinegar to make the sauce. That is what we used in the cooking class.

Ingredients given are for one portion. Multiply the amounts to accommodate any number of chicken breasts to serve whatever sized group you’re feeding.

for each chicken breast or piece of chicken, stir together:

Rub the chicken breasts all over with the jerk seasoning. Either let them marinate for a few hours or use them right away.

Preheat the barbecue grill on medium heat (until the temperature is about 350°F/180°C).

Lay the seasoned chicken pieces on the barbecue grill, drizzle each with about ½ tablespoon beer (or apple juice), shut the lid of the barbecue, and grill. After 10 minutes, turn the chicken breasts over, drizzle the top of each one with another ½ tablespoon beer or juice, shut the lid again, and grill for another 8 to 10 minutes, until the chicken is no longer pink when you cut into the thickest part, but is still moist and juicy.

Alternately, you can cook the chicken in a grill pan on the stovetop, on an electric grill, broil it, or bake it in a 350°F oven until cooked but still juicy.

While the chicken is grilling, stir together the sauce ingredients in a shallow pan or bowl. Taste and add more of any ingredient you feel the sauce needs to have the right balance for your personal taste. Add extra beer or apple juice until it is a thin consistency, like heavy cream.

Place the grilled chicken directly into the sauce and cut it into bite-sized pieces or slices. Toss with the sauce to moisten all the chicken. If cutting a large number of chicken breasts, cut them up on a cutting board, then toss with the sauce.

Serves one or many.

Don’t forget to PIN IT if you’d like to save this recipe for later:

Jamaican Jerk Seasoning Mix and Photos of My Trip to Jamaica