Light as air, rich and eggy, and a whole lot of fun to eat, cloud eggs are your secret weapon for impressing the gang at brunch. Just a few tweaks and a few extra dishes turn ordinary eggs into an egg sensation and make you a kitchen star. (Skip to recipe.) 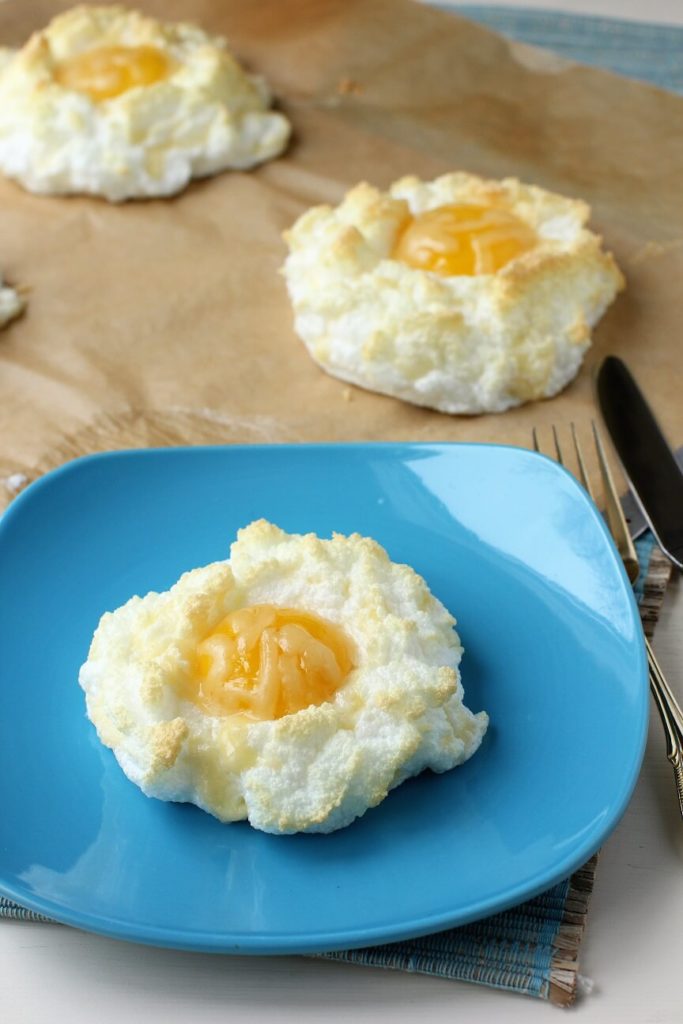 Sometimes you've just gotta play with your food. Every now and then you feel like taking the effort to make the ordinary extraordinary. For instance, you could make yourself a couple regular old fried eggs, which takes five minutes and only dirties one pan. Yes, that would be practical.

Or, you could make yourself these wonderful light, airy cloud eggs that taste like angels made them. The whites melt in your mouth like so much cotton candy and the rich yolk runs through like a gold river. Okay, yes, these eggs take twelve minutes to make, and they dirty one bowl, one whisk attachment, four little dishes, a spoon, a cheese grater, and one baking pan.

But, boy, are they ever worth it! (And, c'mon, you've still got something fantastic on the table in under fifteen minutes.)

My friend Jeff, of the Adobo Chicken fame, got me started making these. I had tried them once before, after spotting them on the internet. I'm not sure what went wrong, but they were a flop (flat and pancake-like), so I decided they were one of those marketing gags - all show, but no real person could ever actually make them. Until Jeff said he makes them all the time, and they're sooooo easy.

Okay. I'm always up for a cooking challenge. It was time to master these beasts.

And master them I did. What had been my problem before? Who knows? This time they turned out beautifully, and I've made them often since. They are fluffy and pillowy every time, with that golden yolk just oozing as you put your fork into them. Yes, the heavens open up and I'm fighting off hordes of angels fluttering in for brunch.

What better way to spend a Sunday morning? 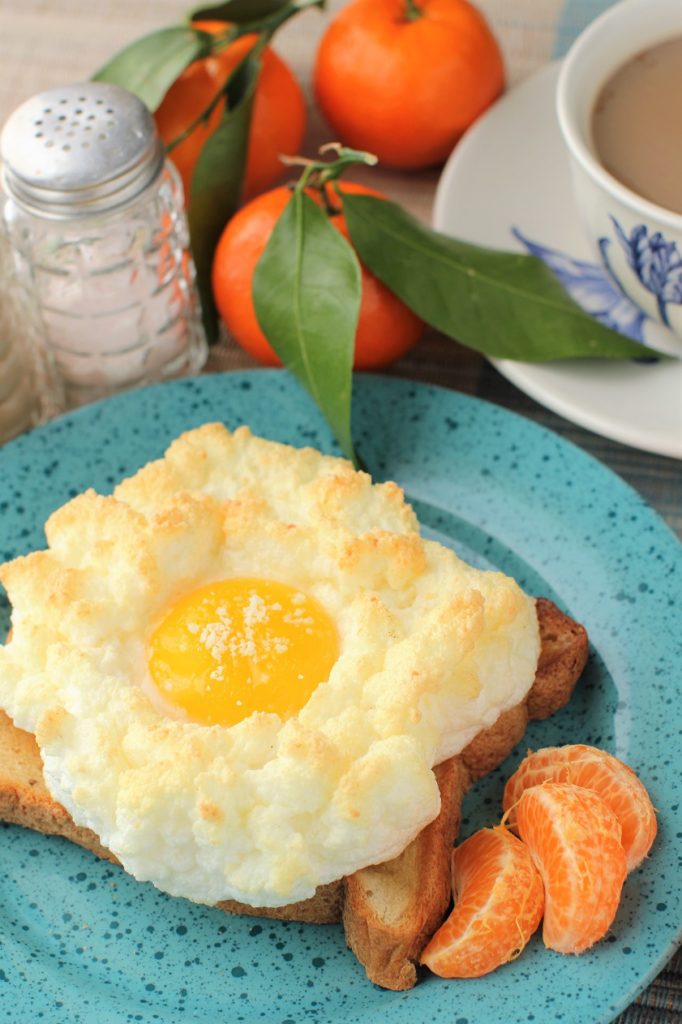 First you separate the eggs, slipping each yolk into a separate small dish (yeah, this is where the extra dishes come in, but really, how much trouble is it to rinse out four little bowls?)

Then you whip up the whites with a pinch of salt, fold in a pinch of white pepper and a handful of shredded white cheese.

Plop them into four cloud-like mounds, and make an indent in each one (to slip the yolk into later). 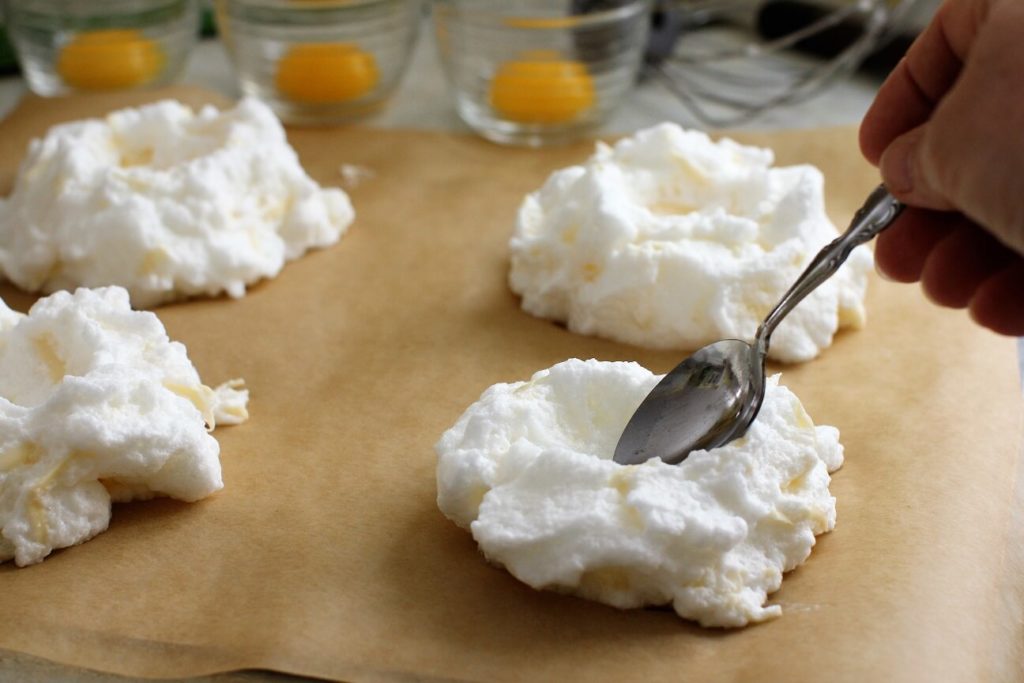 Bake 'em for a few minutes, slip in the yolks, and bake 'em a bit longer. 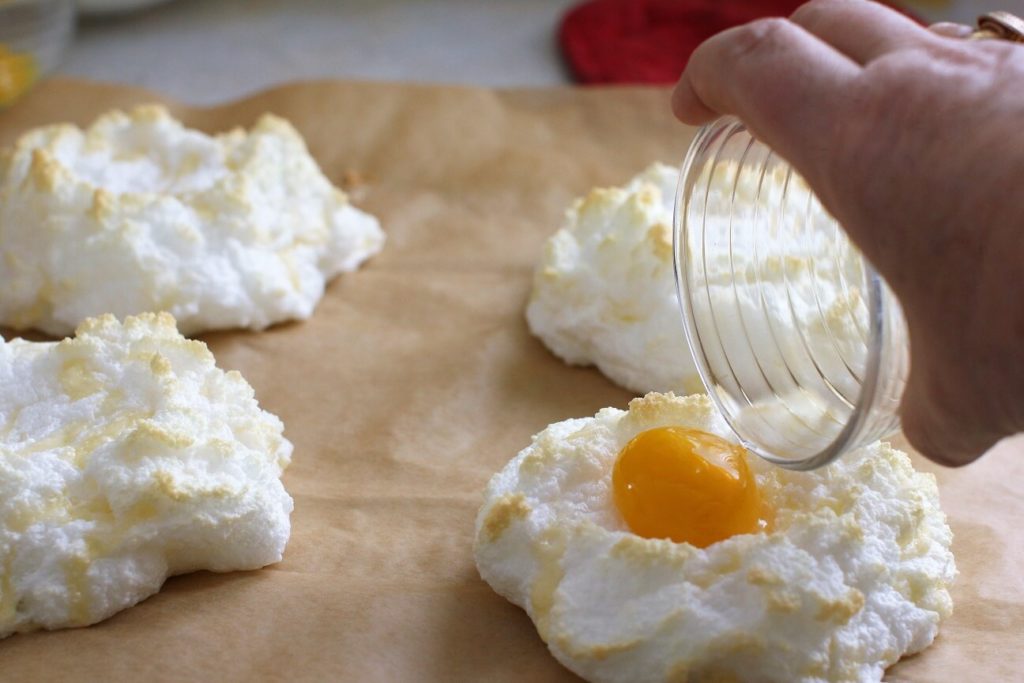 Add a few more strands of cheese on top if you like. 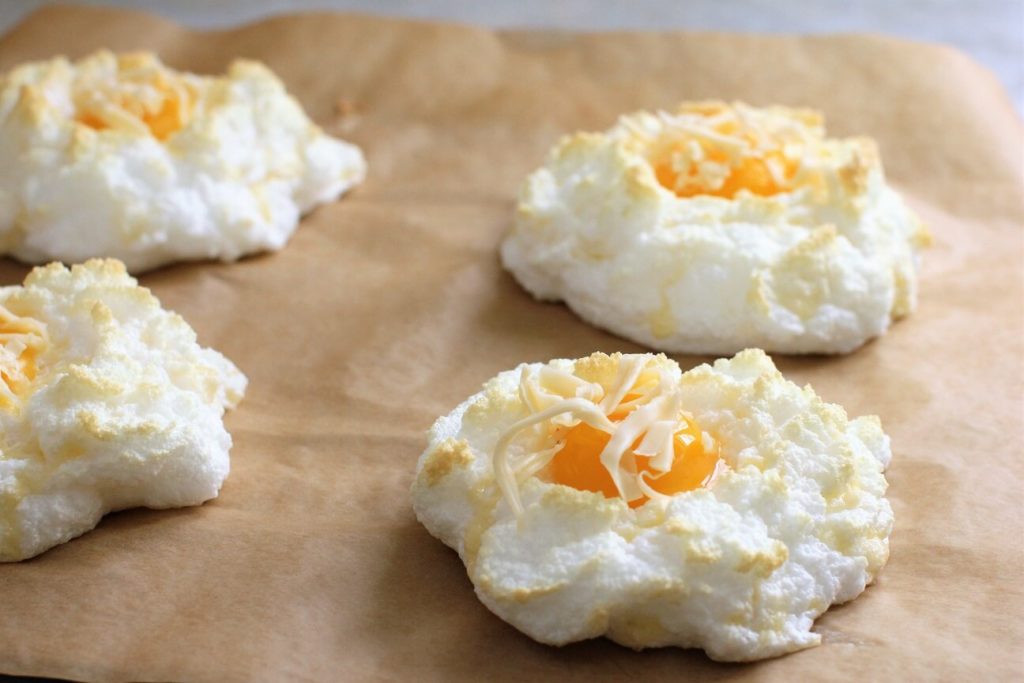 And bake a few more minutes, until the yolk is turned to liquid gold perfection. 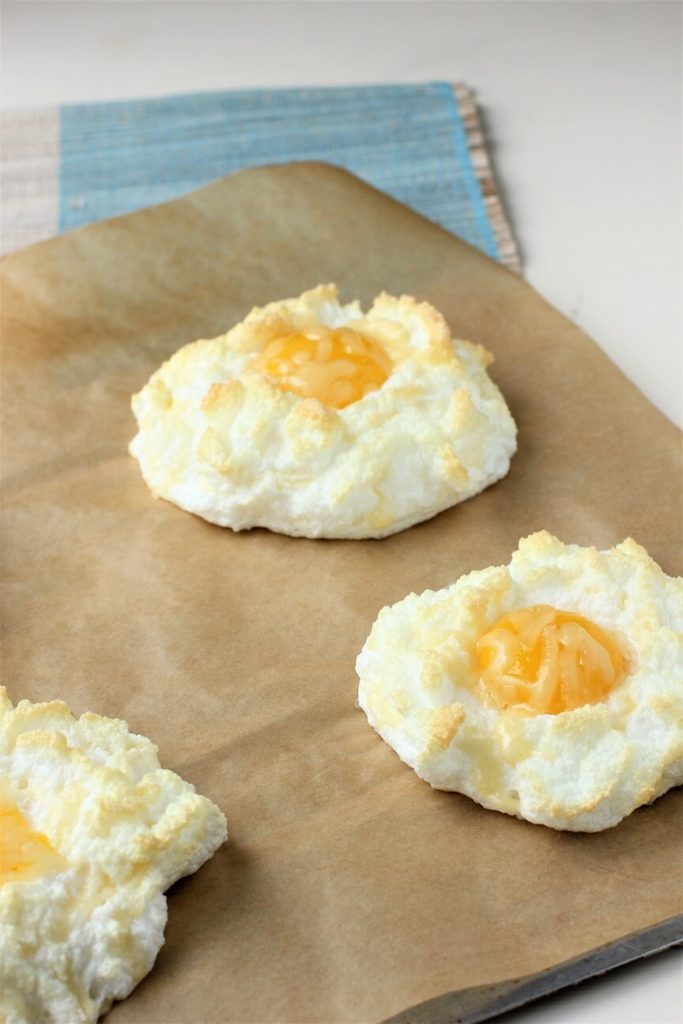 You can serve cloud eggs just about any way or with any thing that strikes your fancy: sauteed mushrooms or bell peppers, ratatouille, baked beans, on toast, with a dollop of salsa, or pico de gallo, with fried ham or sausages, on top of waffles or pancakes, as Eggs Benedict, with roasted asparagus, on top of hash browns, with splashes of hot sauce, a drizzle of chimichurri or just scarf 'em off the baking sheet with a spoon.

Have some fun. Play with your food. Live a little.

Kitchen Frau Notes: I've made cloud eggs with shredded cheese and with parmesan cheese (as many versions on the internet recommend). I far prefer them with shredded cheese. The parmesan gives them a weird flavour - too strong - that overtakes the egg, in my opinion. A lovely, tangy, sharp old cheddar (not the dyed orange kind) really is wonderfully simple and just the right foil for the egg, elevating it to cheesy perfection.

The amount of cheese used in this recipe is just a guide. Throw in a good handful, and it'll be fine. You can easily scale up the amount here and make a couple baking sheets full of eggs to feed a crowd. 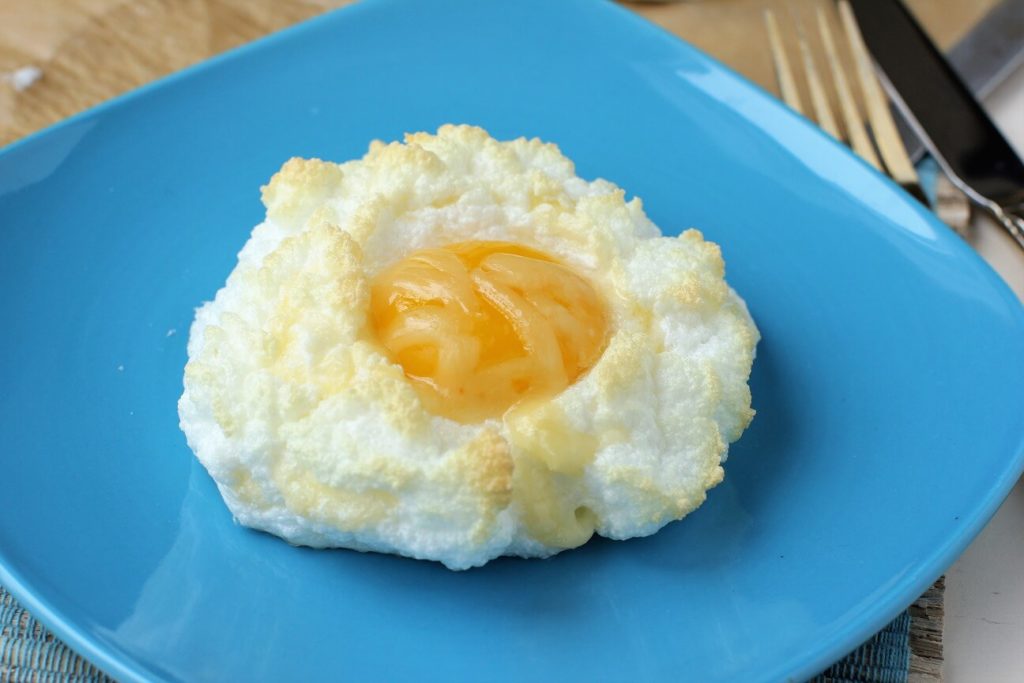 Preheat the oven to 350°F (180°C). Prepare a baking sheet by lining it with parchment paper.

Separate the eggs, putting the whites into the bowl of an electric mixer, and sliding each yolk into a small separate bowl or teacup (yes, you need four of them).

Whip the whites with a pinch of salt (the cheese will add more salt), until stiff peaks form (but don't whip them so long they get dry and kind of curdled looking). Add the pepper and whip a few seconds more, just to incorporate it.

Remove the bowl from the mixer stand, and fold in most of the grated cheese by hand. Leave a few shreds to put onto each egg yolk, if you wish.

Make four equal-sized mounds on the parchment paper lined baking sheet, leaving an inch between them. Use the back of a spoon to make a deep, rounded indent into the top of each egg mound. Make it about double the size of an egg yolk, as it will shrink.

Bake the cloud eggs for 6 to 7 minutes, until you just start to see a bit of gold colour appearing. Then open the oven door and pull the rack out partway. Slip a yolk into each indent on the cloud eggs. Add a few cheese shreds to the top of each yolk, if you wish (this helps keep the top of the yolk from drying out as it bakes). Slide the pan back into the oven and bake for another 3 to 4 minutes, just until the cheese is melted.

If you prefer a firmer yolk, bake the cloud eggs for a few minutes longer.

Serve immediately, with whatever topping or side you desire. Top the eggs with a sprinkling of chopped chives or parsley if you want to dress them up. 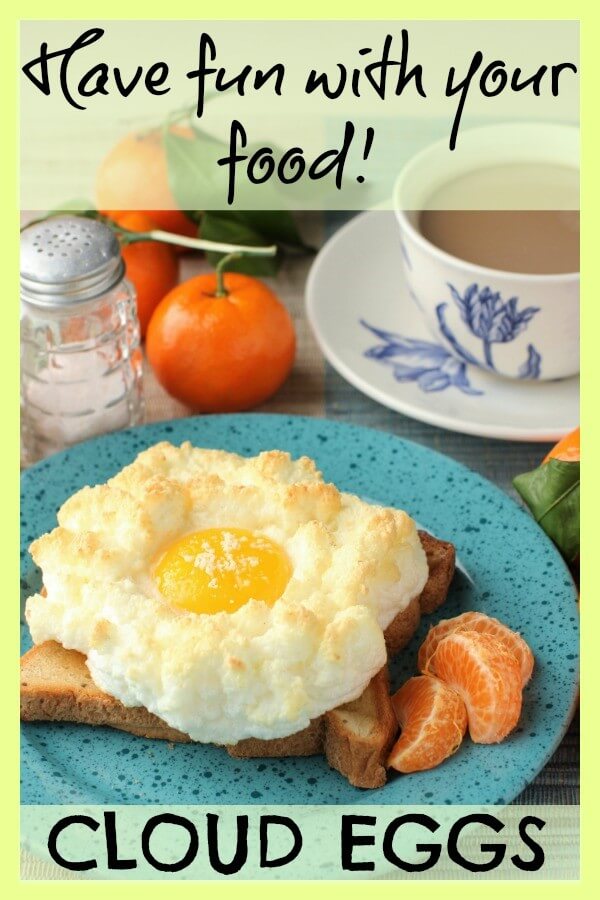