Boxty are easy to make. Part hash brown, part pancake, part flatbread - that's what these tasty little potato cakes are. They're a classic Irish pancake that combines cooked mashed potatoes for a comforting potato flavour with shredded raw potatoes for that rustic hash brown texture. Boxty are great as a snack (with butter and honey), with a fried egg and bacon or sausage for a traditional cooked breakfast, or as a side dish to complement any meal. 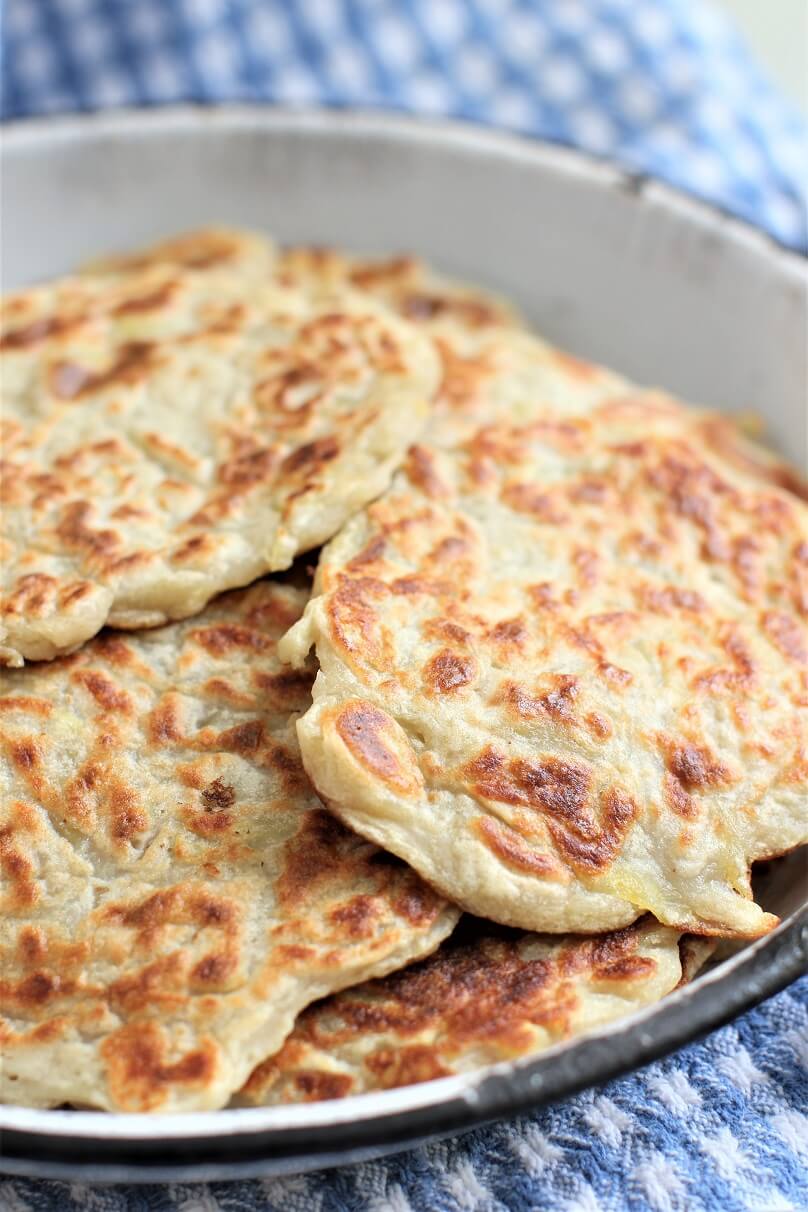 Boxty on the griddle,

boxty in the pan.

If you can't make boxty,

you'll never get a man!

Well, if young Irish lassies of old couldn't find a leprechaun to grant them their wish of a handsome young beau, then I guess they had to learn to make boxty. Luckily it's an easy skill to master (much easier than catching that wily leprechaun).

The word “boxty” (known in Irish as bacstaí ) comes from the Irish phrase 'arán bocht tí ' meaning ‘poorhouse bread.’ These unnassuming little potato pancakes are humble fare for sure, but oh-so-tasty. That's why they've stood the test of time and are still enjoyed today. Originating in northern Ireland, boxty have been around for centuries. Ireland is famous for a variety of potato cakes or breads, but the distinguishing feature of boxty is that they always contain shredded raw potato. Although generally made into small pancakes like the ones pictured here, they can also be made with a thinner batter and cooked more like crepes. There are as many variations as there are Irish cooks, with some recipes containing eggs, or cream, or milk, some with more flour than potatoes, some with much less. Some with pepper or green onions stirred into the batter. I've kept my recipe to the more simple version. Since they're plain, they go well with savoury or sweet.

The texture of these little Irish potato pancakes is irresistible - a bit dense and chewy from the mashed potato flour batter, a bit fluffy and nubbly from the shredded raw potato. A touch of baking soda combined with the acidity of the buttermilk gives them a lift while cooking, and adds a delightful tanginess. If you like potatoes, you'll even like nibbling on them plain (I know I do). 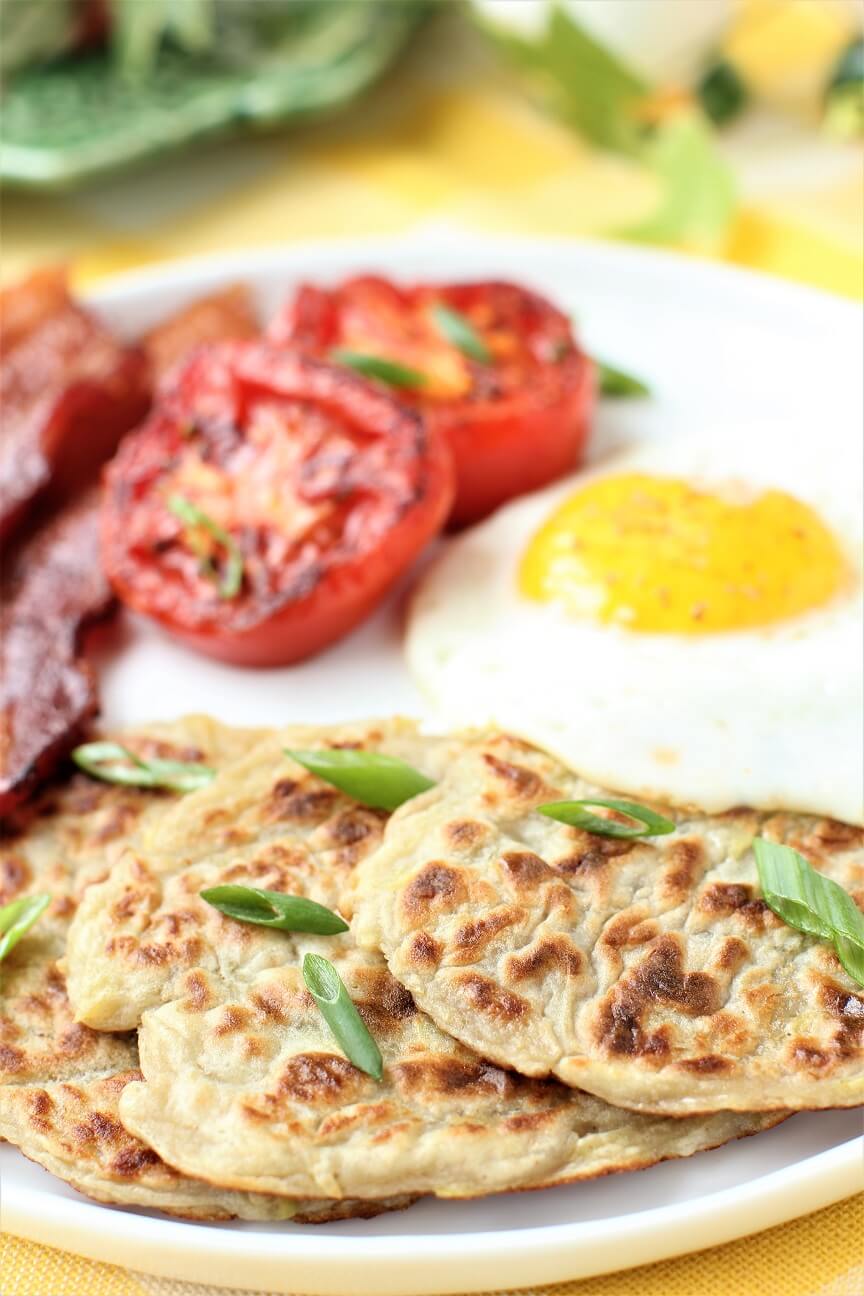 How Easy is it to Make Boxty?

I found many recipes for boxty that required squeezing out the shredded raw potatoes, but I'm all for less mess and more simple preparation, so I went with the method mentioned by Donal Skehan, famous Irish food personality. He doesn't always squeeze his potatoes out, so I decided not to either. Besides, squeezing out the juice from the potatoes and then adding back a lot of liquid in the form of buttermilk seems counterproductive to me. I've opted for a pancake ratio with more potatoes and less flour.

The batter comes together quickly - cook up a couple potatoes while you shred some raw, stir them all together with a bit of flour (gluten-free works equally well here) and buttermilk, and you can start frying the boxty. Make sure to cook them slowly so the shredded potato cooks through as the outsides of the pancakes brown and crisp up nicely (3 to 4 minutes per side will do it). 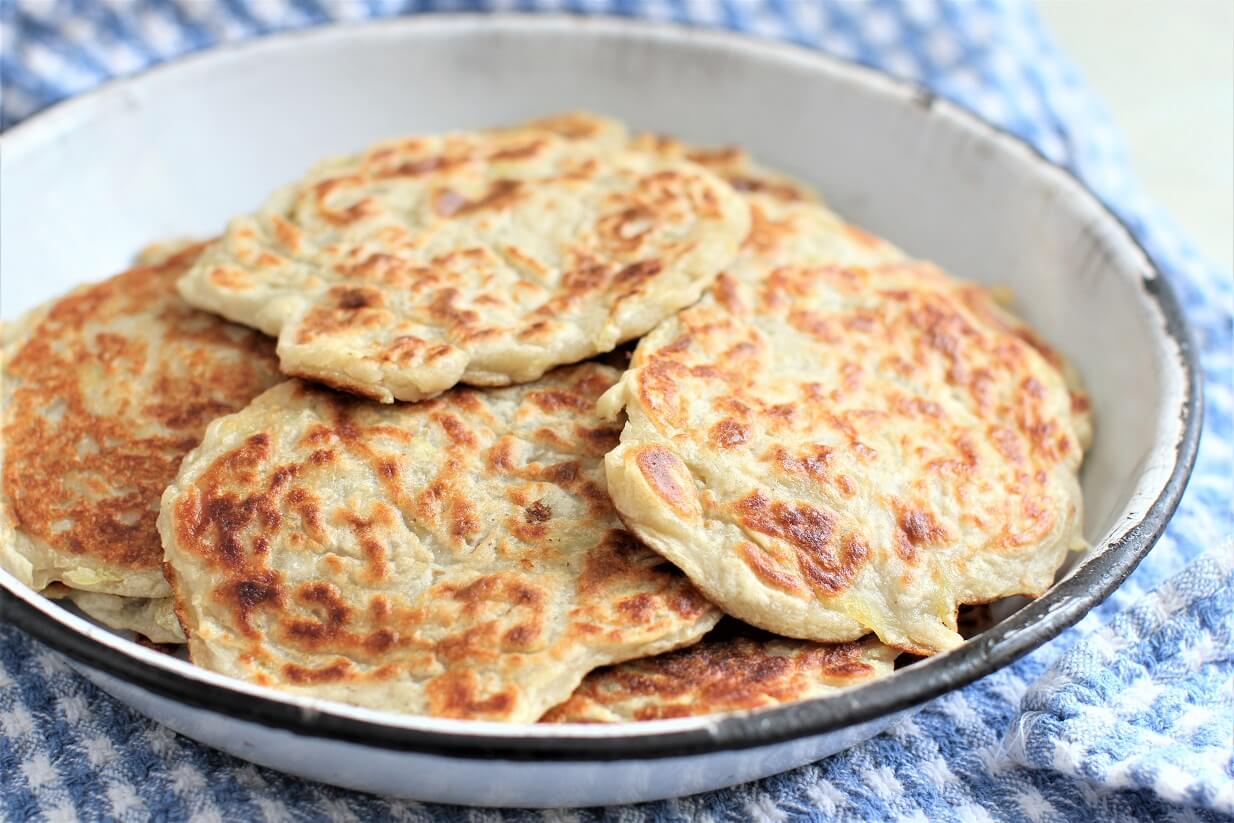 How do You Eat Boxty?

Boxty are versatile, great in a meal wherever you'd serve potatoes or flatbread. They make a tasty starchy side with any savoury mains and can be used as a vehicle for scooping up stews and gravies. Eat them with a dollop of sour cream and a sprinkling of sliced spring/green onions. Boxty are traditional in northern Ireland as part of a classic Irish breakfast fry-up (an Ulster Fry) along with soda bread, eggs, sausages, bacon, black pudding, mushrooms, and tomato. Serve them like you would a flatbread along with your favourite dishes.

Or have your boxty as a sweet snack or breakfast - I love them with butter and a drizzle of honey. The recipe makes a large amount, but the leftovers freeze well (if they don't get eaten first), and are easy to reheat by crisping them up in a bit of butter in a skillet, or popping them into the toaster. I keep ours on the counter, covered, and they're usually gone within a day. 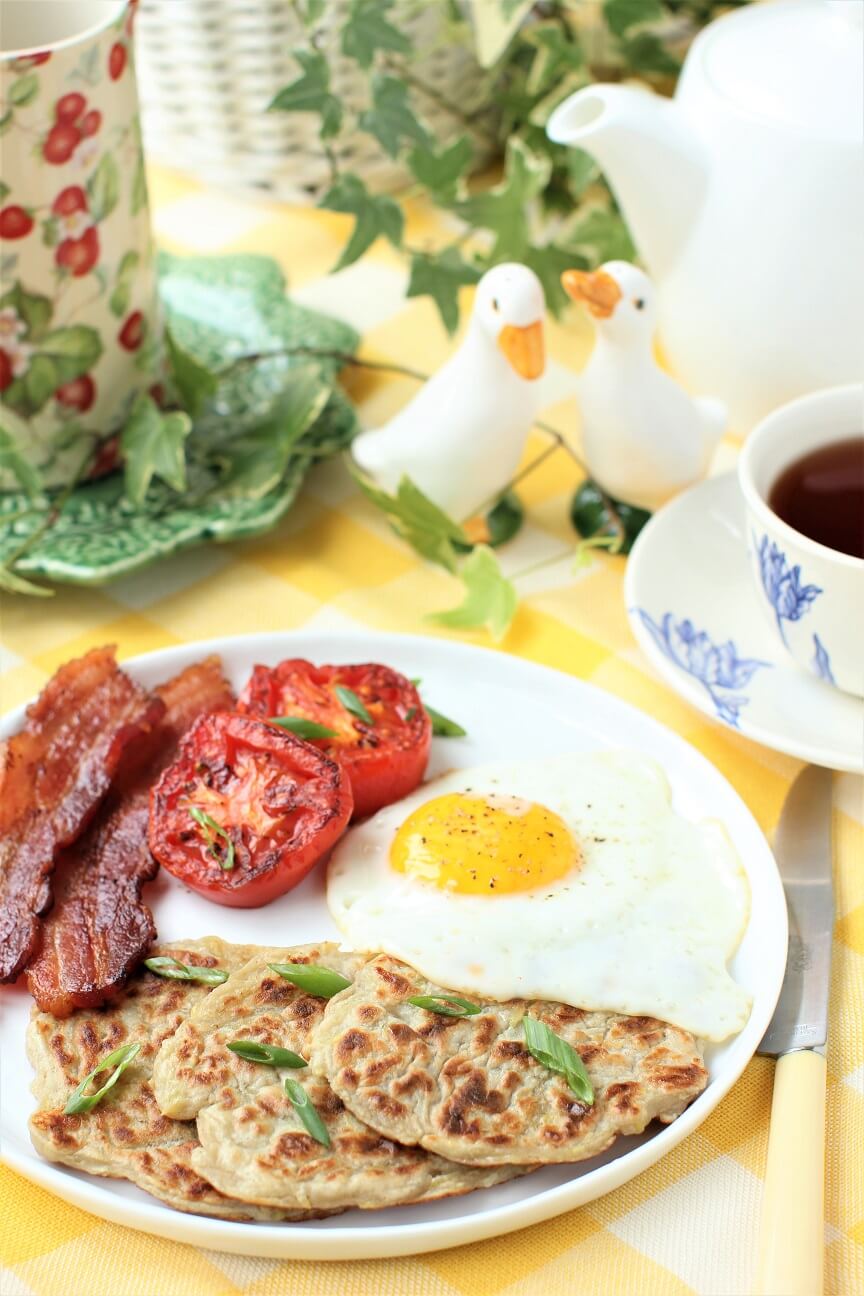 So, if you're looking for a tasty Irish way to start your morning on St. Patrick's Day (or any other day of the year), or a comforting side dish to your Irish dinner, make up a batch of boxty. You can even make them ahead and have them ready to reheat, for extra convenience. Who knows? You might even have a hungry leprechaun pop in to join you for wee bite! 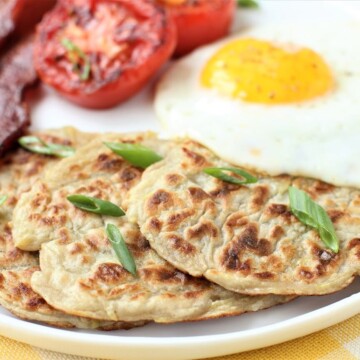 Margaret Bose Johnson
Boxty are easy to make. Part hash brown, part pancake, part flatbread - that's what these tasty little potato cakes are. They're a classic Irish pancake that combines cooked mashed potatoes for a comforting potato flavour with shredded raw potatoes for that rustic hash brown texture. Boxty are great as a snack (with butter and honey), with a fried egg and bacon or sausage for a traditional cooked breakfast, or as a side dish to complement any meal.
No ratings yet
Print Recipe Save for Later
Prep Time 30 mins
Cook Time 30 mins
Total Time 1 hr
Course Breakfast, Side Dish
Cuisine Irish
Servings 6

You can quickly cook up and mash potatoes to use in this recipe, or use leftover mashed potatoes from the day before. If they've been mashed with butter, milk, or garlic, no matter. That'll just add flavour. You can use any kind of potatoes, but starchy ones like russets provide the best light fluffy texture.
Tried this recipe?Let us know how it was! 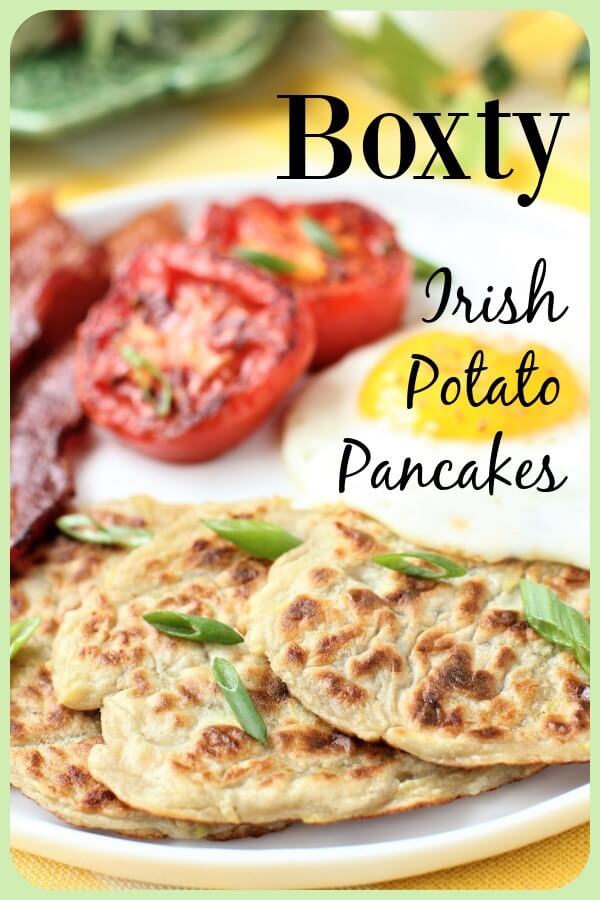