Portuguese comfort soup, Caldo Verde, consists of a silky potato base loaded with thin ribbons of collard greens or kale and rounds of spicy smoked sausage. It’s hearty and simple, a bowl of soup at its finest. (Skip to recipe.) 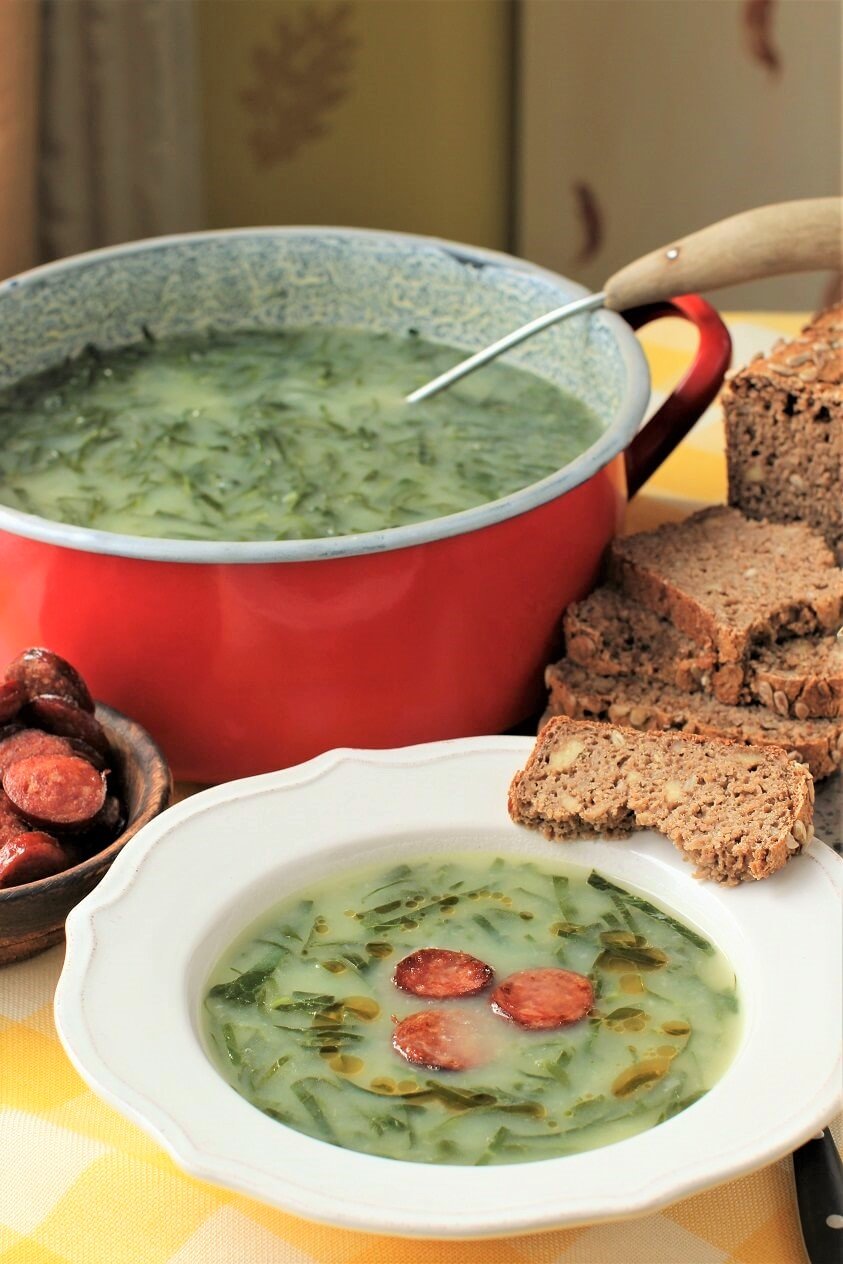 If Portugal had a national soup, this would be it. Caldo Verde can be found all across that small country – in farmhouses and village homes, local cafés, and fine restaurants. This delicious soup has become Portugal’s trademark. It originated in the coastal Minho region in the north, but is beloved all over Portugal, as well as in Brazil and other Portuguese speaking countries. The recipe is simple, just a few ingredients, but the taste is fantastic.

It is a humble peasant soup – potatoes are cooked in water with some onion and garlic, then mashed or puréed. A few big handfuls of couve verde, a specific type of dark green Portuguese cabbage, are tossed into the pot and simmered. Collard greens, kale, or Swiss chard are a good substitute, since we can’t get the Portuguese kale here. 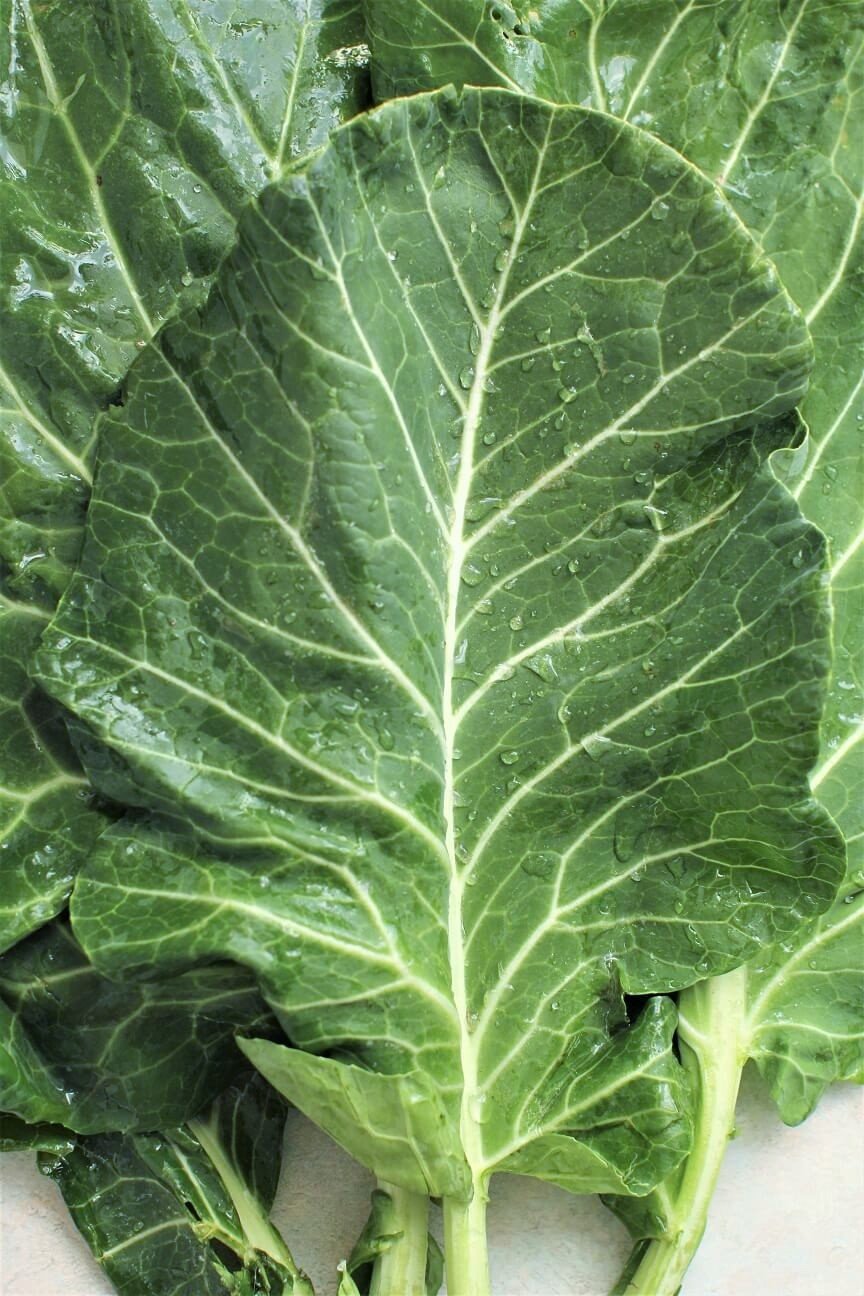 The important thing, if you want the soup to be authentic, is that the leaves are cut into thin strips – not chunks, not thick strips, not fancy schmancy shapes. Just thin ribbons, as thin as you can cut them. 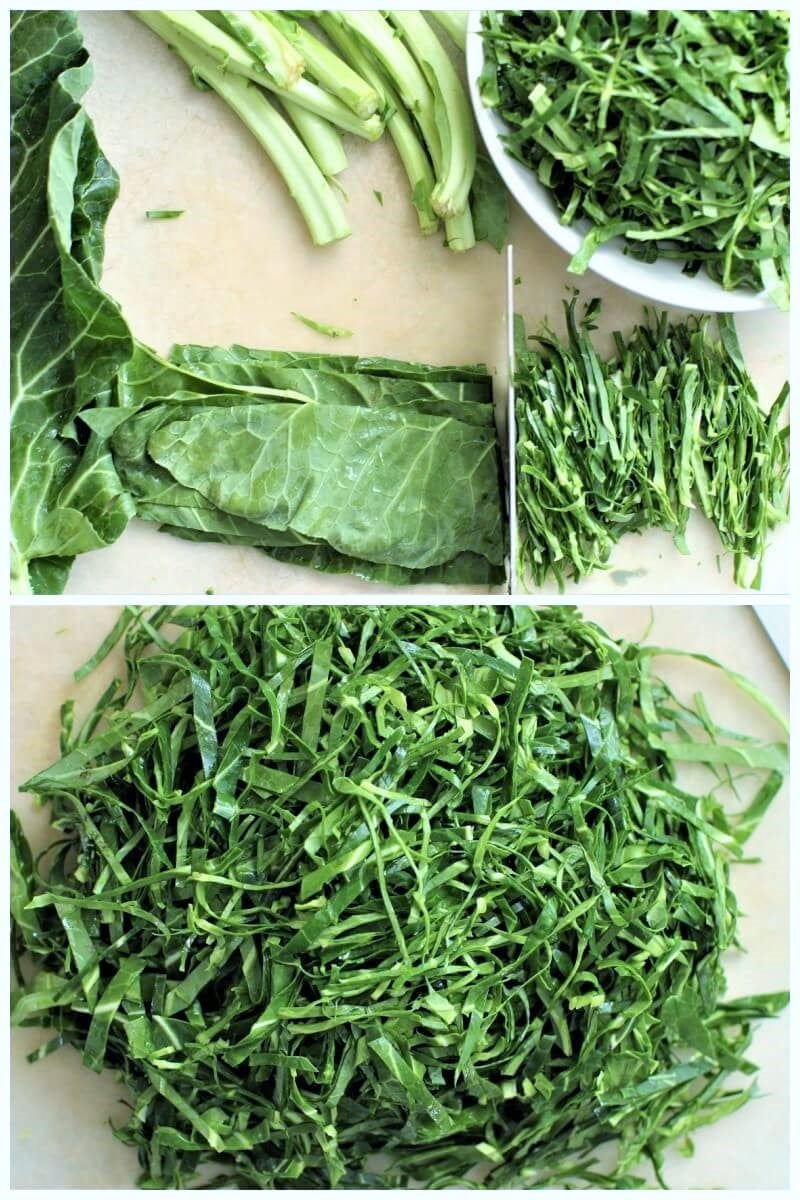 The finished soup is served with a few slices of smoky fried Portuguese linguiça or chouriço sausage: Spanish chorizo or any type of smoky garlicky sausage would also work. The sausages are typically cooked separately and can then be stirred into the soup near the end of the cooking time, or served alongside and added to each bowl after dishing up. (In poorer times, it was common to add just a single slice of sausage to the center of each bowl at serving time.)

A slice of rustic whole grain bread is all you need to make a complete meal. Simple and utterly delicious. 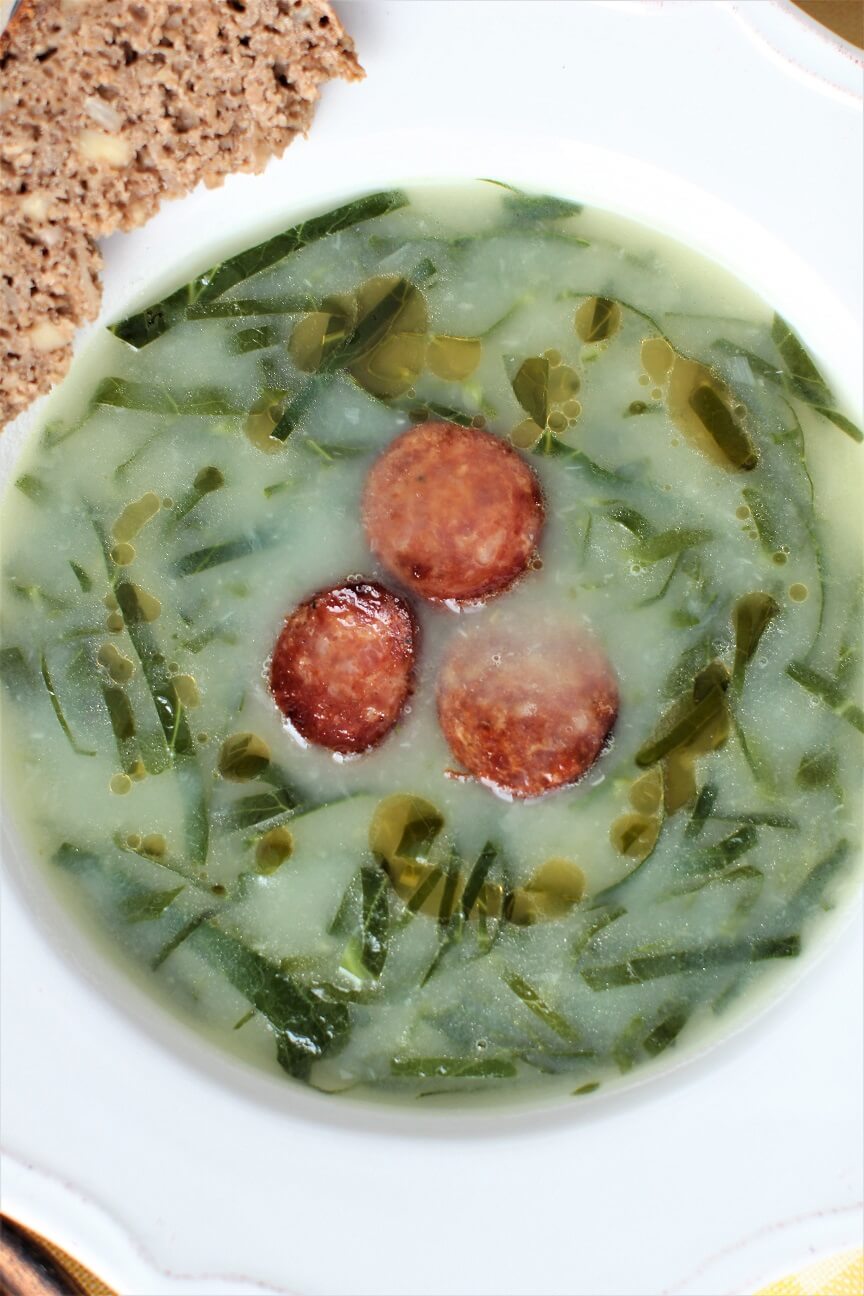 I first tasted Caldo Verde while sitting at an outdoor riverside cafe in Porto on our trip to Portugal. I had it several more times during that week, and fell more in love with its flavourful simplicity every time I tasted it.

The only change I’ve made to the traditional Caldo Verde is one commonly made nowadays – to replace half the water with broth to add a bit more flavour. I’ve also added a couple chunks of sausage to the soup at the beginning to simmer with the potatoes so it they release some of their flavour. Olive oil is drizzled on to the soup at the end for more flavour and richness. Otherwise, Caldo Verde really shouldn’t be messed with.

The ingredients for this hearty soup are simple, and it’s been made the same way since the first potful was cooked in the countryside of Portugal long ago. Caldo Verde is a soup born out of necessity and poverty. It has endured and become Portugal’s most beloved soup. 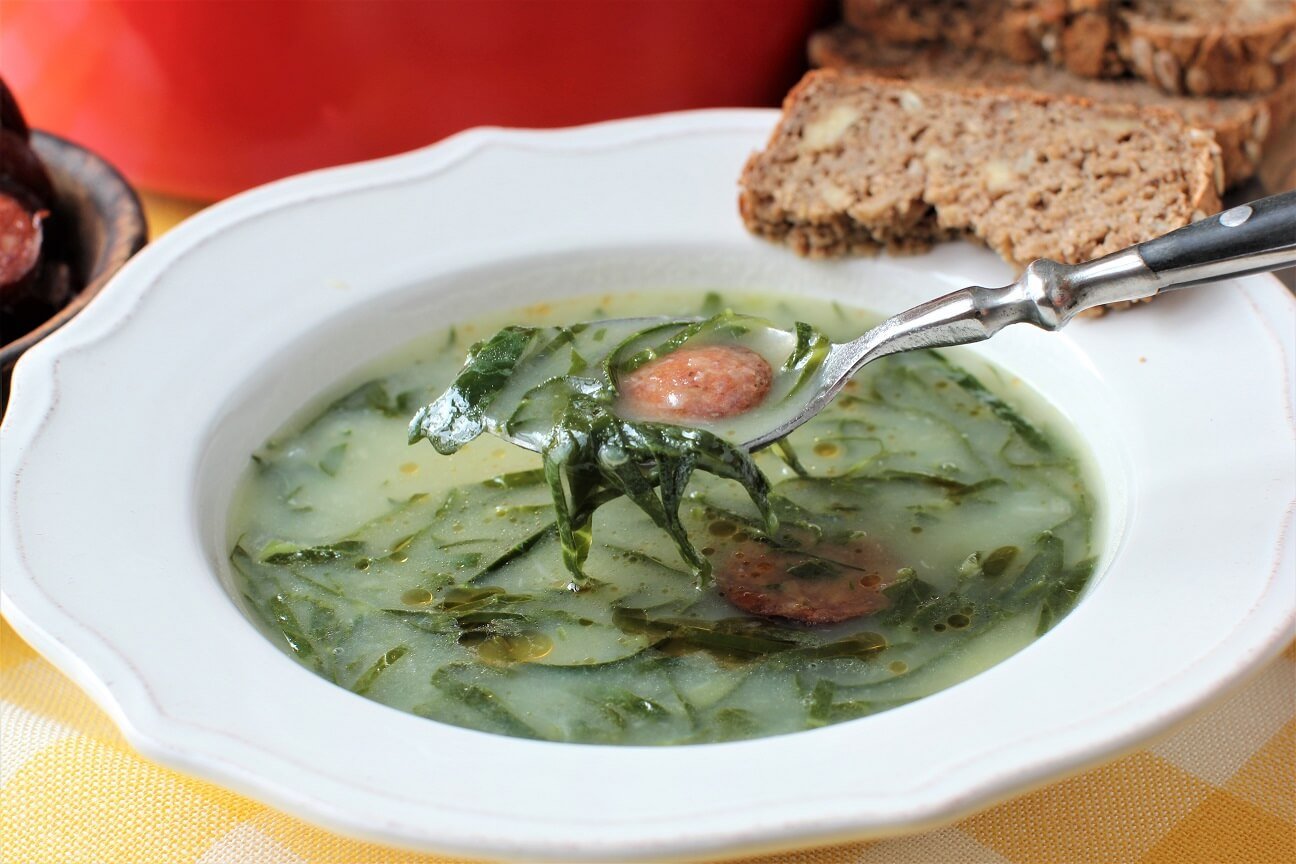 The puréed potato/onion/garlic broth is light and silky, the threads of greens are toothsome and just lightly chewy, the sausage slices provide bursts of smoky, salty flavour. The whole is much greater than the sum of its parts. This soup is a winner. In fact, when I served it the first time, Raymond told me it was the best soup he’d ever had, and the request has been made to have it more often around here. I can totally live with that.

Kitchen Frau Notes: The pureed potato broth is light and creamy – if you want a thicker broth, just use more potatoes in the recipe.  If you don’t have a blender, you can also cook the potatoes a bit longer and then just mash them in the pot until they are mostly broken up – you’ll have a few small chunks, but they add nice texture. Any types of potatoes work, but russests will break down the best if you’re mashing them. If you’re puréeing the potatoes with a blender or stick blender, then any kind will do.

You can make this soup vegetarian by using vegetable stock for the liquid and omitting the sausage. Add ½ to 1 teaspoon of smoked paprika to give it the smoky flavour that sausages would impart. The paprika will colour the soup a bit, but it will still be delicious. Drizzle the soup with plain olive oil at serving time. 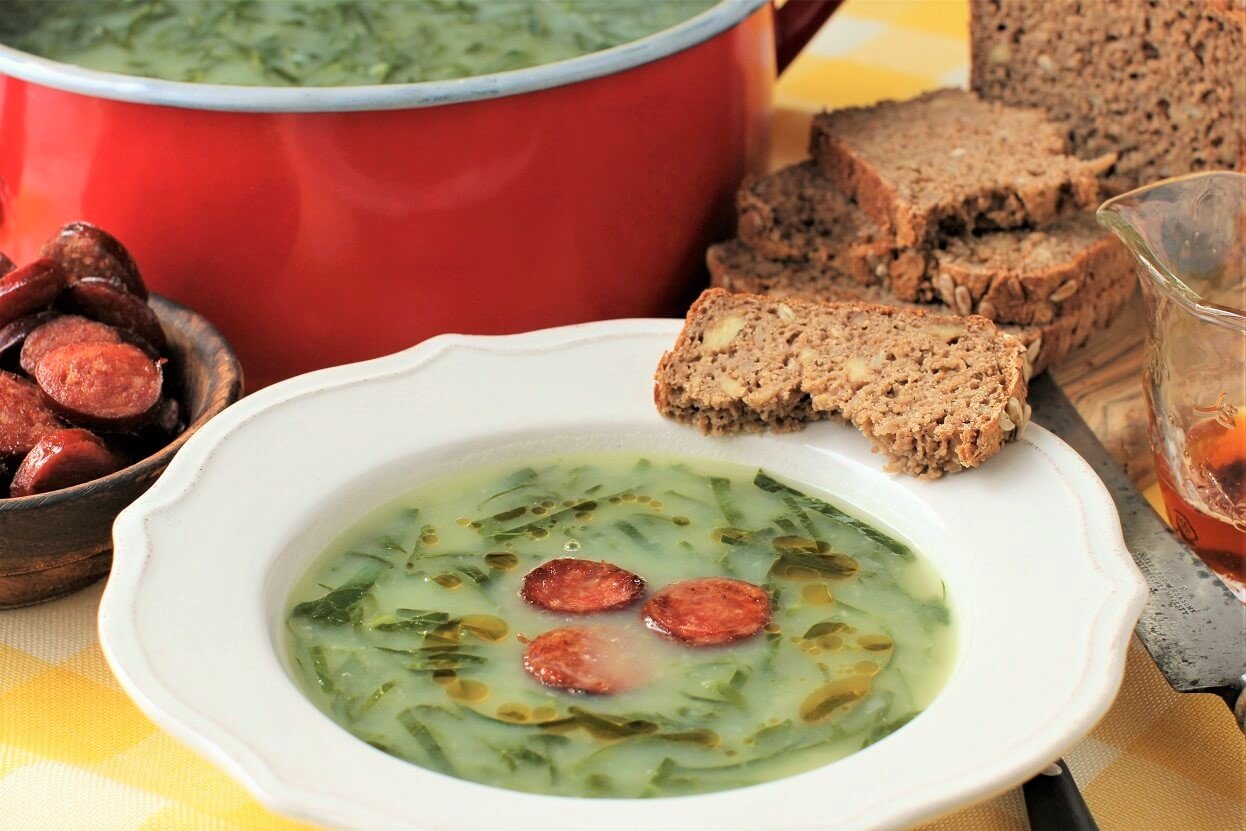 Wash the collard leaves, then cut each leaf in half lengthwise by slicing down along each side of the central stem and removing it. Discard the stems. Cut each of the collard leaf halves in half again lengthwise, forming about 2-inch-wide long strips. Stack a bunch of strips on top of each other, then cut the stacks into very fine ribbons. Repeat until all the leaves are shredded. You should have about 6 to 8 cups, loosely packed. Set aside. (If using curly kale, strip out the stems, tightly bunch together handfuls of the leaves, and cut them into very fine strips as best you can.)

Heat the ¼ cup of oil in a large heavy-bottomed soup pot. Add the diced onions and sliced garlic. Cook for 3 to 4 minutes, then add the potato chunks, water, broth, 1½ teaspoons of salt, and the pepper. Cut two 1-inch chunks off the sausage and add them to the pot (this is to add flavour to the broth as it cooks). Bring the soup to a boil, then reduce the heat to medium-low, cover the pot, and simmer for 20 minutes.

While the soup is simmering, slice the remaining chorizo into ¼-inch (.5cm) slices. Heat the remaining 2 tablespoons of olive oil in a skillet over medium-high heat. Sauté the sausage slices, turning them, until they are browned on both sides and somewhat crispy. Remove the slices to a bowl, and reserve the rich, red-tinged oil from the skillet.

Remove the two chunks of sausage from the soup, slice them, and set them aside. Purée the soup with an immersion blender (or in batches in a regular blender) until silky smooth. Return the slices from the two small chunks of sausage back to the puréed soup.

Add the finely sliced collard greens or kale to the soup, increase the heat slightly, and cook for 5 to 10 minutes, until the greens are wilted and tender, but still bright green. Taste the soup and add the remaining ½ teaspoon salt and more pepper as desired, to taste. (If you use all water, you may need even more salt.) The soup should be well seasoned, as it doesn’t have many ingredients, and relies on salt to bring out the flavours.

To serve, you can either add the sautéed sausage slices to the soup just before serving and stir in the flavoured sausage oil, or to be more elegant you can top each bowl with several of the sausage slices and drizzle some of the oil into each bowl at serving time. 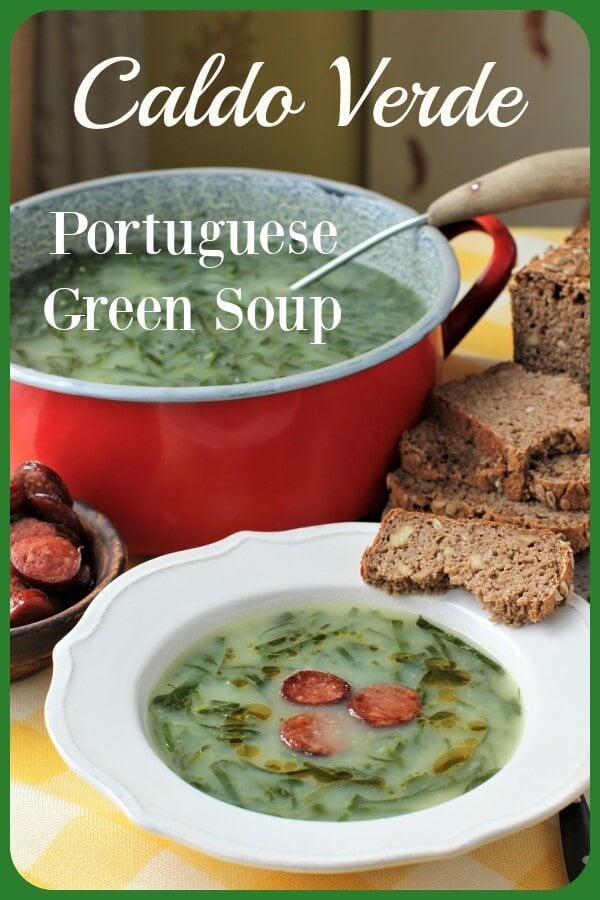