A big bowl of golden lentil soup warms us to the core on these chilly autumn days. It's loaded with vegetables, two kinds of lentils, smoky sausages, and a hit of health-boosting turmeric and other goodies. I like to make a big batch for the week. (Skip to recipe.) 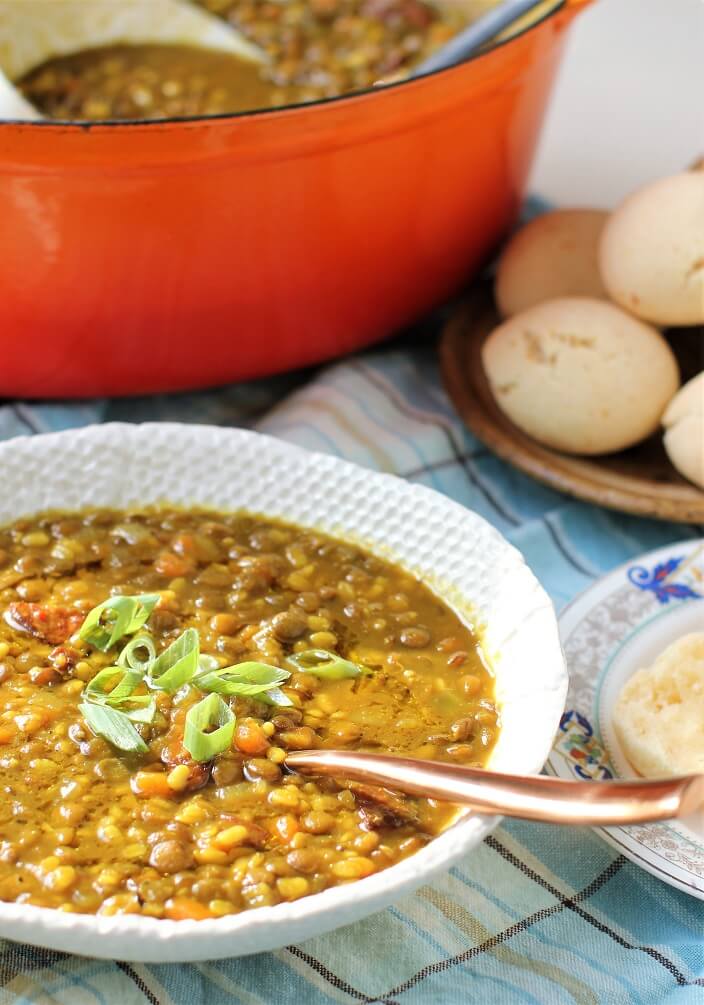 When you've had your third snowfall of the season and it's not even the middle of October yet? You pulled the winter boots and coats out of storage in early September? You're bundling up in winter woollies to dig vegetables out from under a crust of freezing white stuff which covers what's left of your garden?

Well then . . . it is officially time for hearty stews and comforting soups. This thick rich lentil soup will warm you from the inside out. A big bowl of it, cradled between frozen fingers, the steam curling enticingly, is just what's needed to stave off the winter shivers. 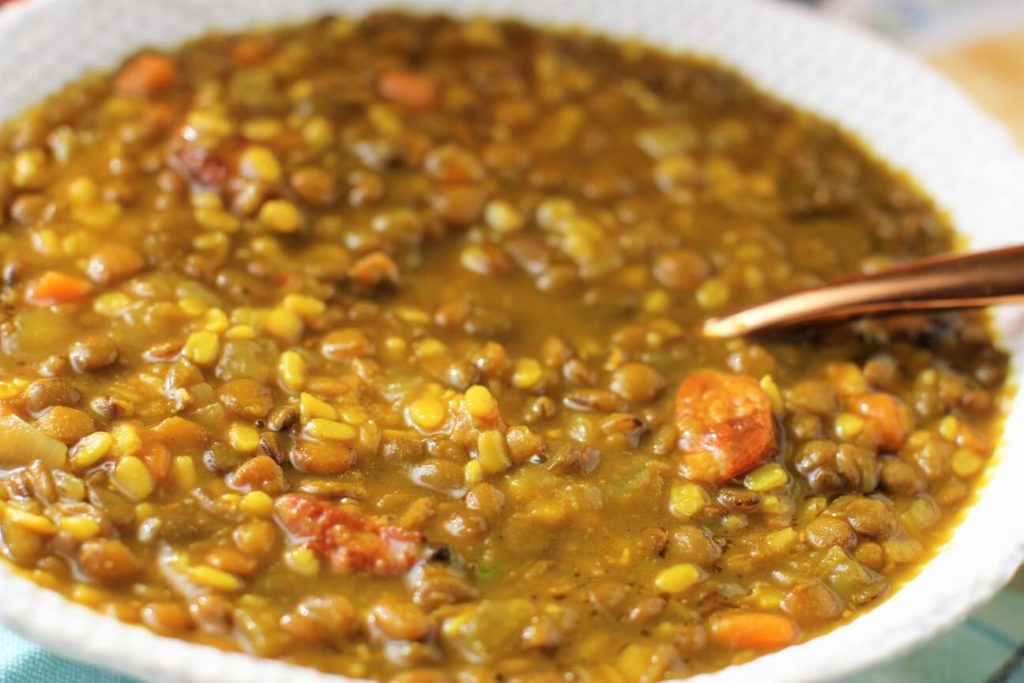 Two kinds of lentils, lots of garden veggies, and chunks of hearty sausage swim in a thick broth rich with the golden hue and anti-inflammatory properties of earthy turmeric. Garlic, ginger, and chicken broth are also part of the health-promoting army, ready to tackle winter ills. The umami flavours and loads of fiber satisfy your stomach and taste buds. I love that this soup makes a big batch, ready for freezing or for a week's worth of delicious meals. 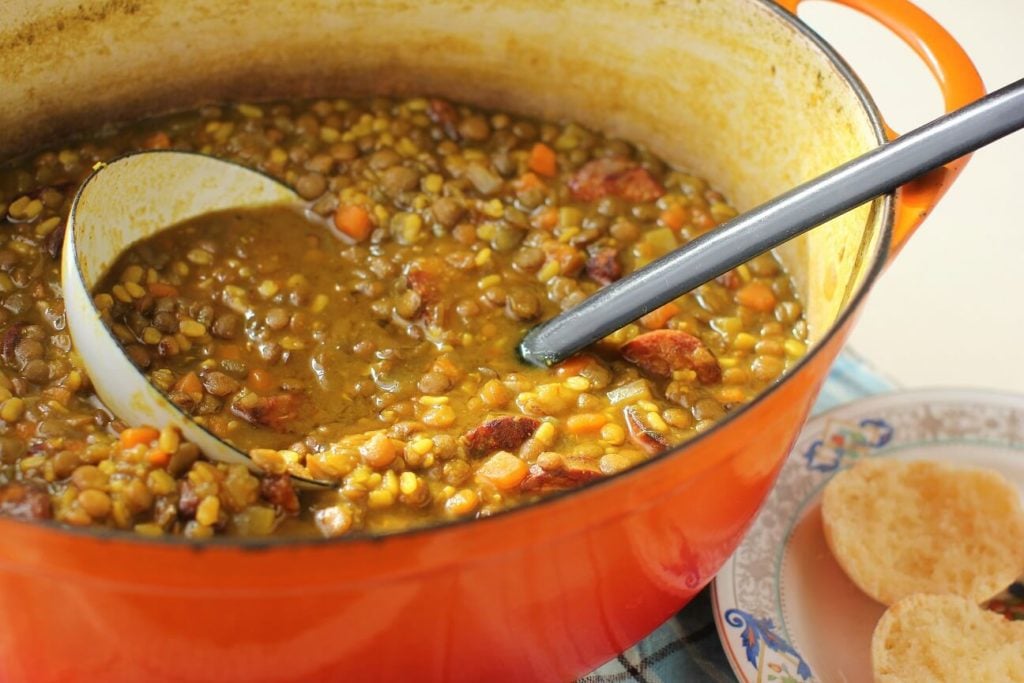 And in case you're feeling a little sorry for us northern Canadians and our sadly aborted summer, here are a few photos of the glorious fall weather that came in little bursts between our miserable snowfalls. (The forecast is for another few inches of snow again tonight!)

This was the apple tree after our first snowfall; 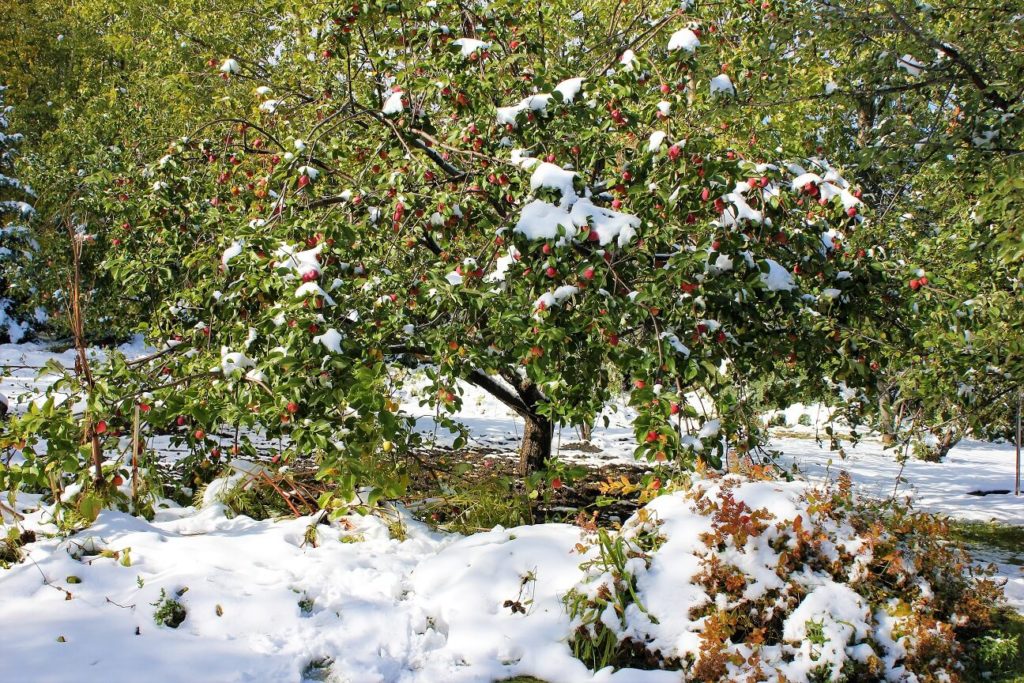 and this was the same tree a few days later: 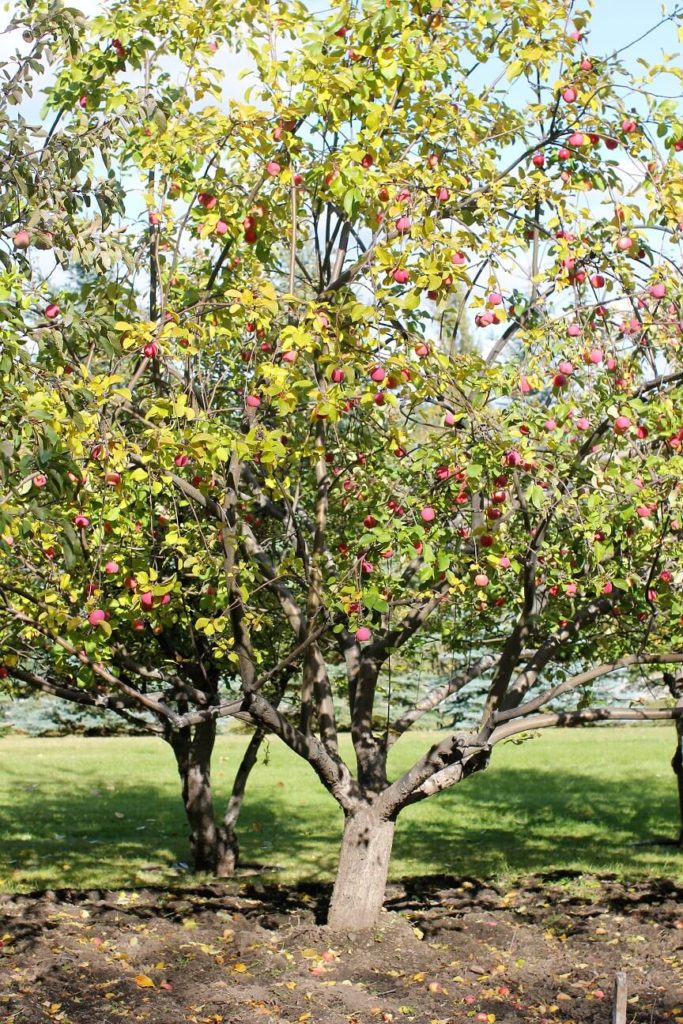 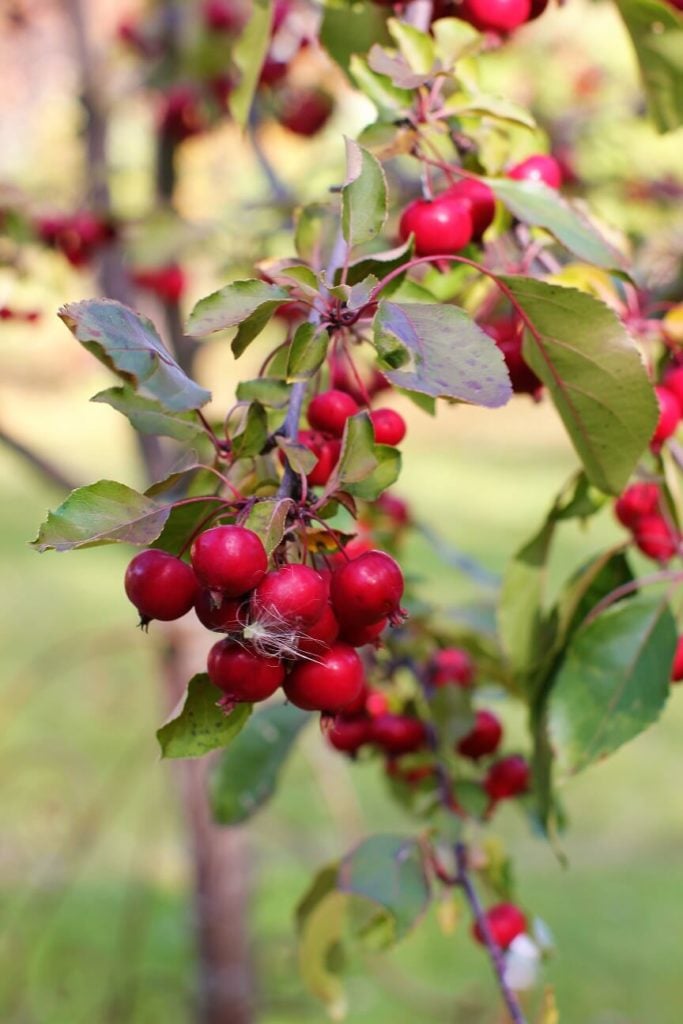 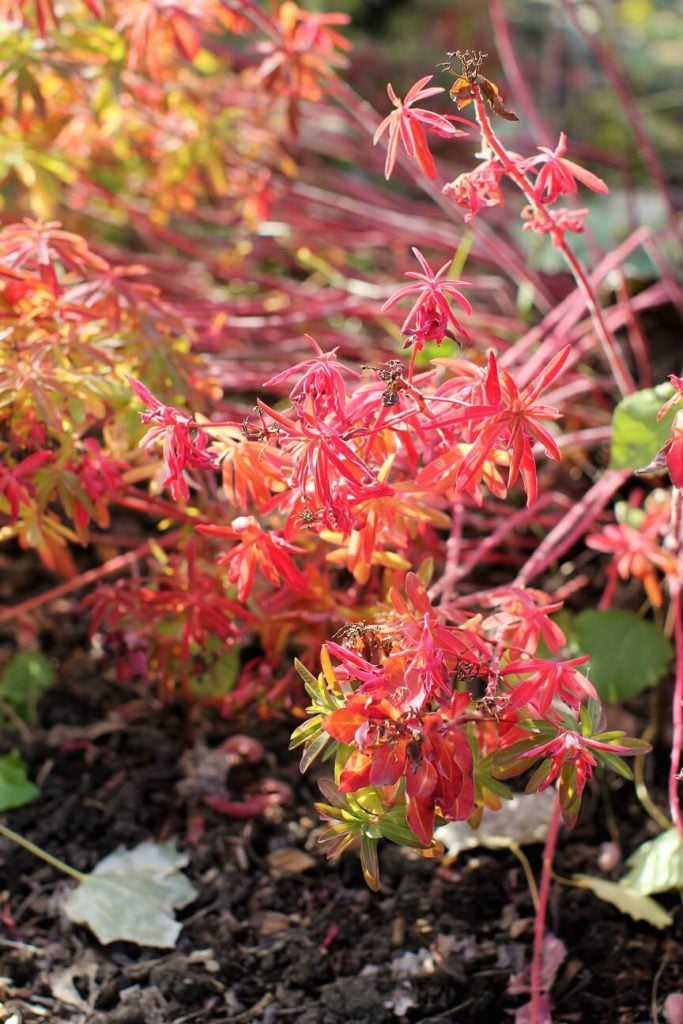 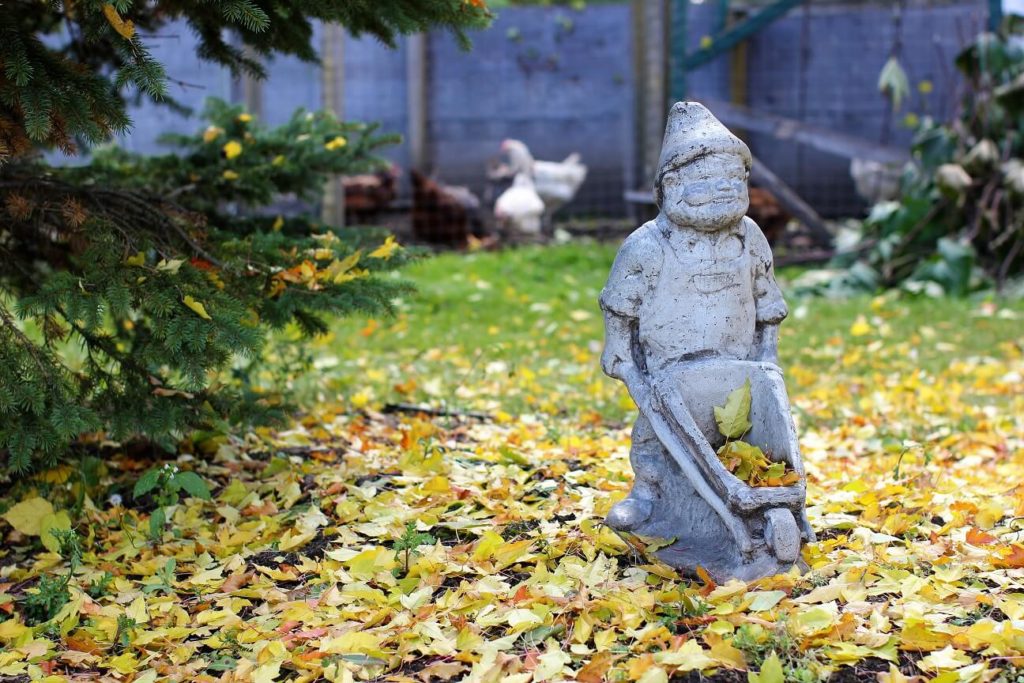 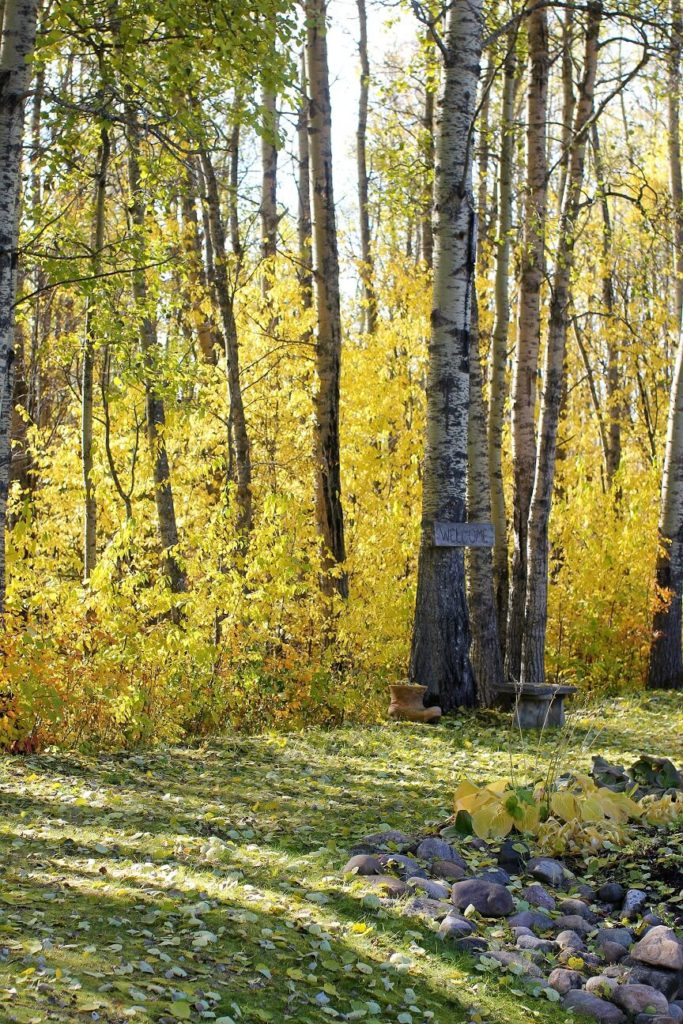 No matter how often or how early the snows come, we are still always blessed with short, glorious bursts of autumn. Mother Nature paints us a most beautiful postcard.

I'll hang it on our fridge to remind me when we're in the midst of our next big snowfall.

Kitchen Frau Notes: Use any kind of sausage in this soup, though smoked sausages add a rich smoky flavour. You could also substitute it with a half pound of bacon, diced. Pour off some of the fat and leave two tablespoons for the soup.

Add whatever other diced vegetables you desire. Peppers, zucchini, winter squash or cabbage are all tasty.

Urad dal are a the centers of the Indian black gram or black lentil. They are mild and creamy and meld beautifully with regular flat lentils in this soup, but you can also use split red lentils which cook down to add a silky texture.

To make a vegetarian version: Omit sausages and use 2 tablespoons of olive oil. Use vegetable stock instead of chicken stock, and add 2 to 4 tablespoons nutritional yeast to the soup at the final cooking stage for umami flavour. 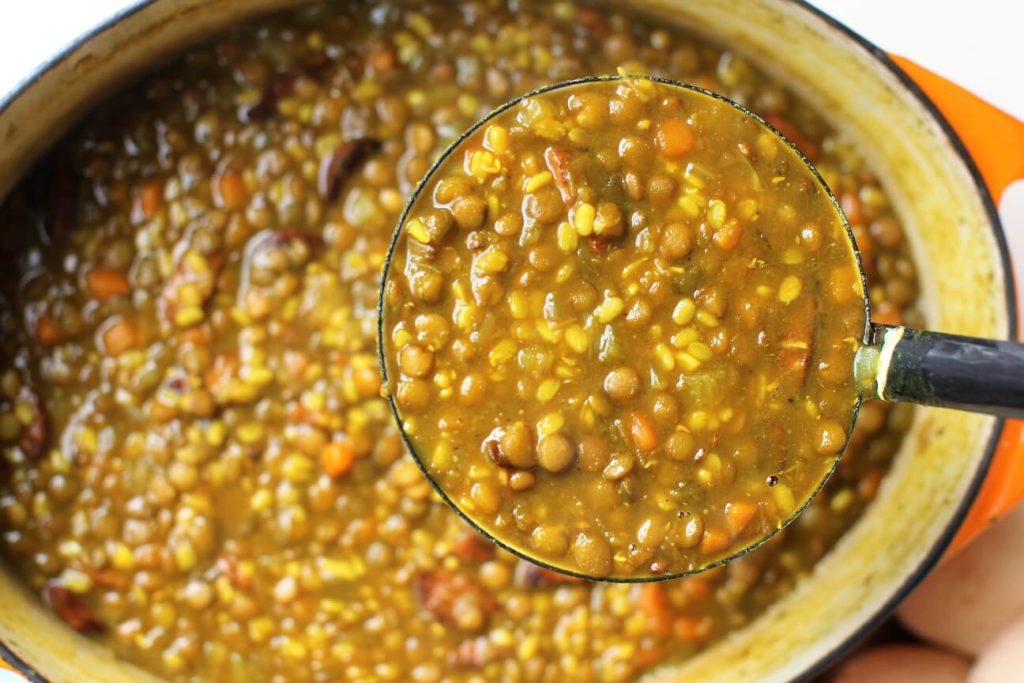 Cut the sausages in halves lengthwise, then slice them into ¼ inch (.5cm) thick half moons. Cook the sausage pieces in a dutch oven or heavy bottomed soup pot over medium heat until they are lightly browned and have released most of their fat. Remove the sausage pieces with a slotted spoon and set them aside, leaving the fat in the pot. If there isn't enough fat to make about 2 tablespoons, add a splash of olive oil to the pot.

Add the diced onions, carrots, and celery and the minced garlic to the hot fat. Cook, stirring often, for about 5 minutes, until the vegetables have become translucent.

Add the lentils, water, bay leaf, turmeric, ginger, and pepper to the vegetables. Bring to a boil, then lower the heat, cover the pot, and simmer for 20 minutes until the lentils are almost tender.

Add the chicken stock, red or white lentils, salt, and reserved browned sausage pieces to the pot. Bring to a boil, then lower the heat, cover the pot, and simmer again for 20 minutes. If the soup is too thick, add a bit of chicken stock or water to thin it to your liking. Stir in the honey and vinegar and serve topped with a drizzle of olive oil, a few sliced green onions, or a bit of crumbled feta cheese.

Note: This soup freezes well, and will keep in the fridge for five to six days. It thickens as it chills, so you will need to thin it with some water when you reheat it. 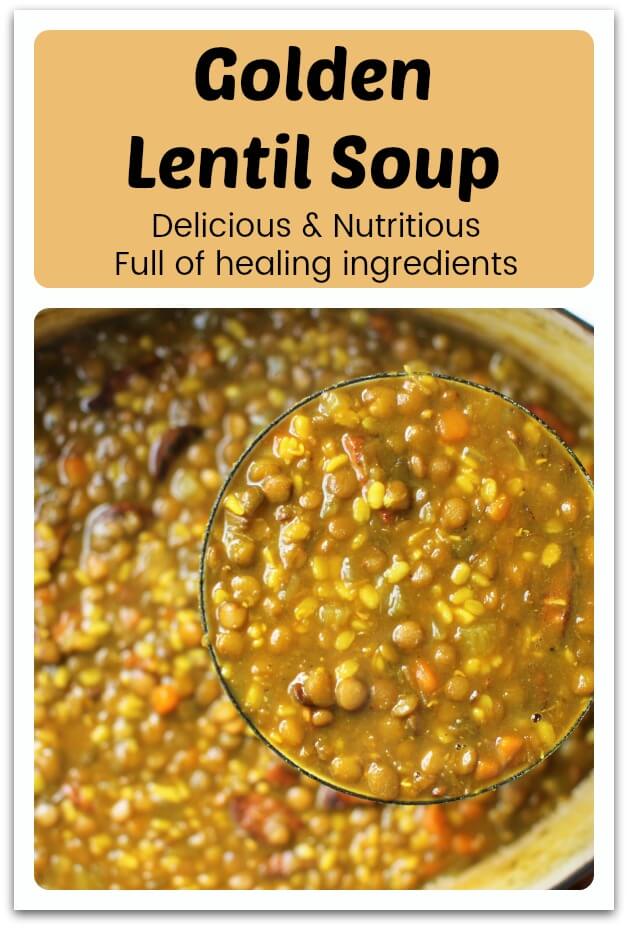 Clean out the Crisper Drawer Soup