It's a cross between a cheesecake and a delicious apple pie. This Bavarian Apple Cake is easy to make and sure to wow your guests, especially if you make it with super crisp and sweet-tangy fresh apples. The light cheesecake layer is loaded with tender, cinnamon-whiffed apple slices, all piled in a buttery shortcrust shell - no need for rolling out pastry. A great make-ahead dessert for entertaining. 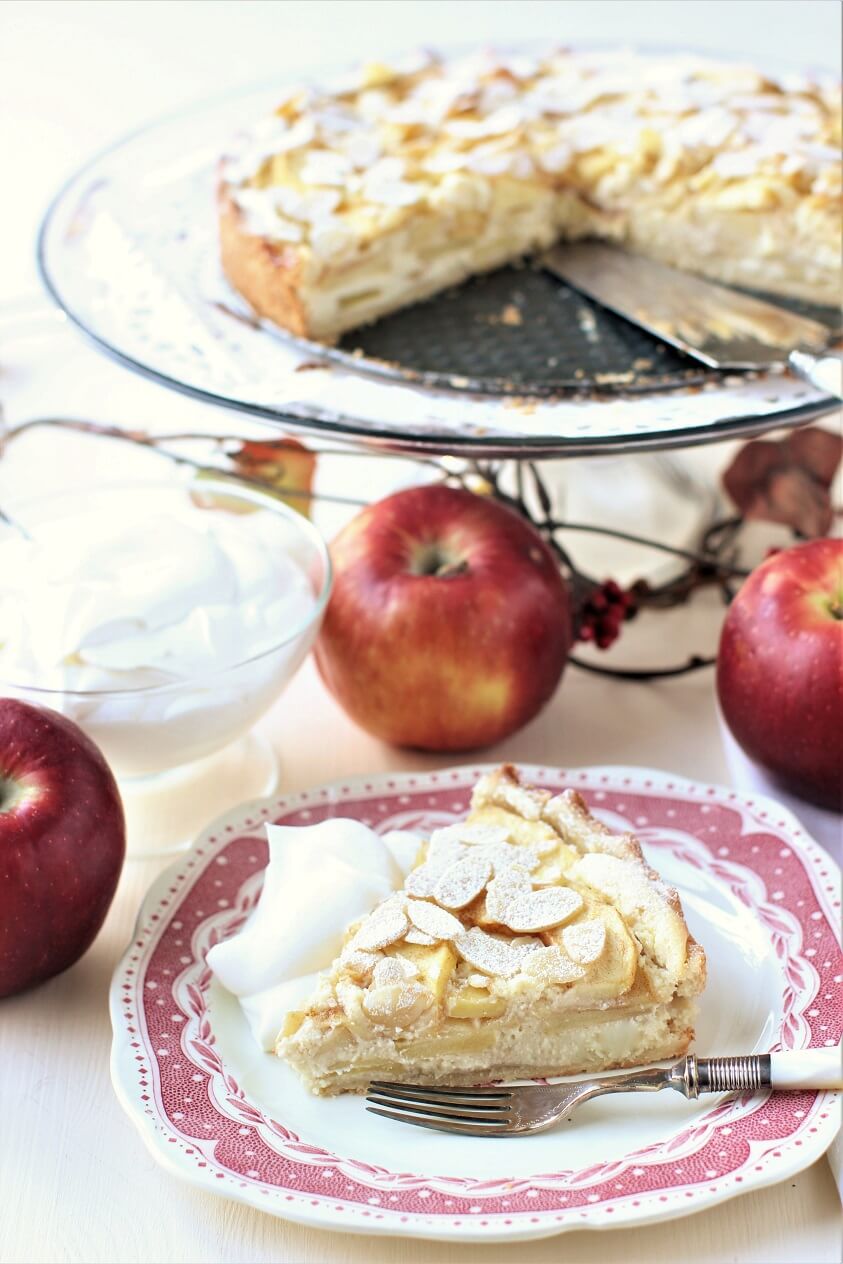 Thanks to Cosmic Crisp® Washington Apples for sponsoring this post so I could share this tasty recipe with you and tell you about one of my favourite fruits for snacking, cooking, and baking.

I've been in apple heaven ever since the new season's crop of Cosmic Crisp apples became available again this year. Every time I grocery shop I make sure to pick up another bagful, and we've been indulging in these amazingly sweet, tangy, crispy apples. I love slicing one and having it to nibble on while we binge-watch Netflix in the evenings, and dicing up a half a Cosmic Crisp to add crunch to a basic green salad for dinner. Munching one right out of the fridge when I feel that mid-afternoon slump coming on gives me renewed energy to tackle the rest of the day. Because of their extraordinary crispiness and extra sweet and tangy flavour profile, Cosmic Crisp apples are great to use raw in so many ways, but lately I've been finding out how wonderful they are to bake and cook with, too. They really retain their shape and texture beautifully when baked, making them taste extra fresh and bright in recipes like this Bavarian Apple Cake. 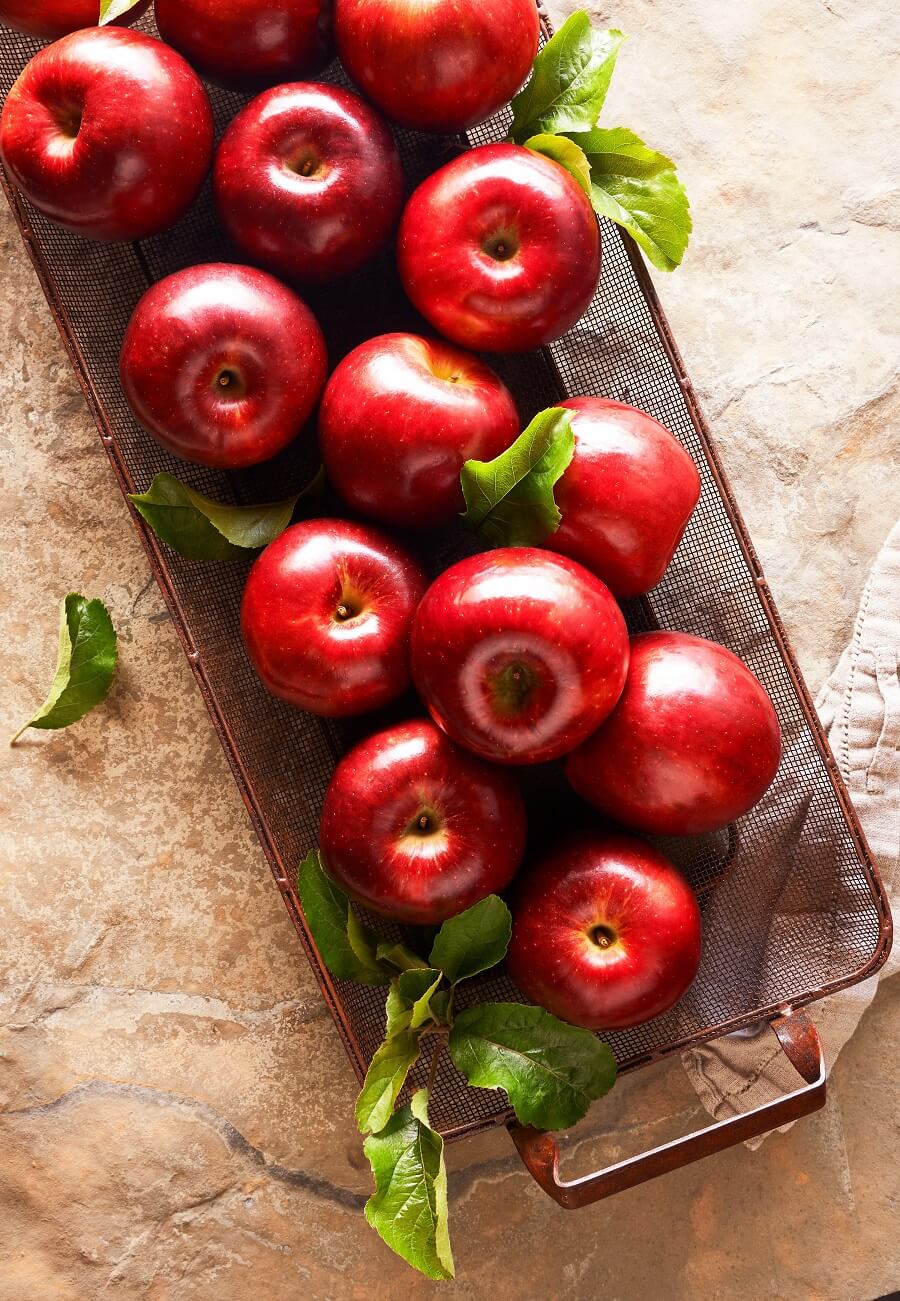 Cosmic Crisp® Washington state apples are crispier and sweeter than other varieties, and naturally slow to brown. They have been several decades in the development, having been classically bred at Washington State University. I love that they are a non-GMO apple variety, a cross between the 'Enterprise' and the 'Honeycrisp'. These large, juicy apples have a remarkably firm and crisp texture. And in addition to being sweet and crisp, they are naturally slow to brown when cut and maintain their texture and flavour beautifully when stored in your refrigerator.

Their intense flavour shines through in this luscious apple cake. I find I can cut the sugar way down when baking with Cosmic Crisps, as they are so naturally sweet. Combine them with a buttery cookie-like short crust (so easy, because there's no fiddling with chilled butter and rolling of pastry - just pat the dough into the pan) and a creamy, tangy cheesecake layer (not too much - just the right amount for a great base) for an amazing apple cake experience. The Cosmic Crisps get sliced and tossed with a small amount of cinnamon and sugar, so their natural tanginess shines through. Their texture stays tender-crisp, even after baking, making this a delightfully fresh and fruity cake. A shower of sliced almonds and a dusting of icing sugar are the final finishing touches. If you whip up this cake for a finale to a festive dinner, you'll receive a few oohs and aahs, I am sure. Who could resist? 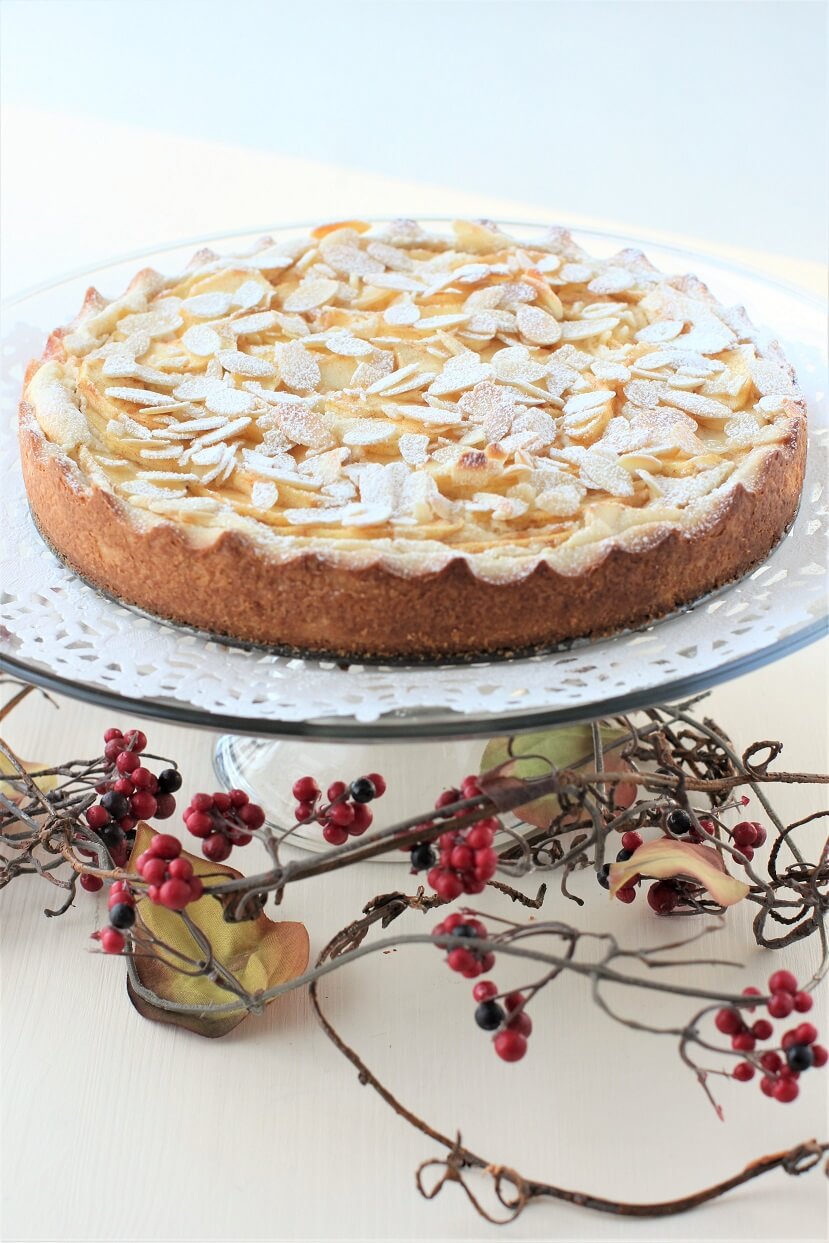 Making the crust is a breeze - no chilled butter or finicky pastry handling needed. Just cream the butter and sugar in a mixer bowl and add the flour (gluten free flour works great here). You don't even need a rolling pin - just press the dough into a springform pan with your fingers, pushing it halfway up the sides of the pan. Then push the bottom of a flat cup or jar evenly into the corners to smooth out the soft dough and get rid of any thick spots. 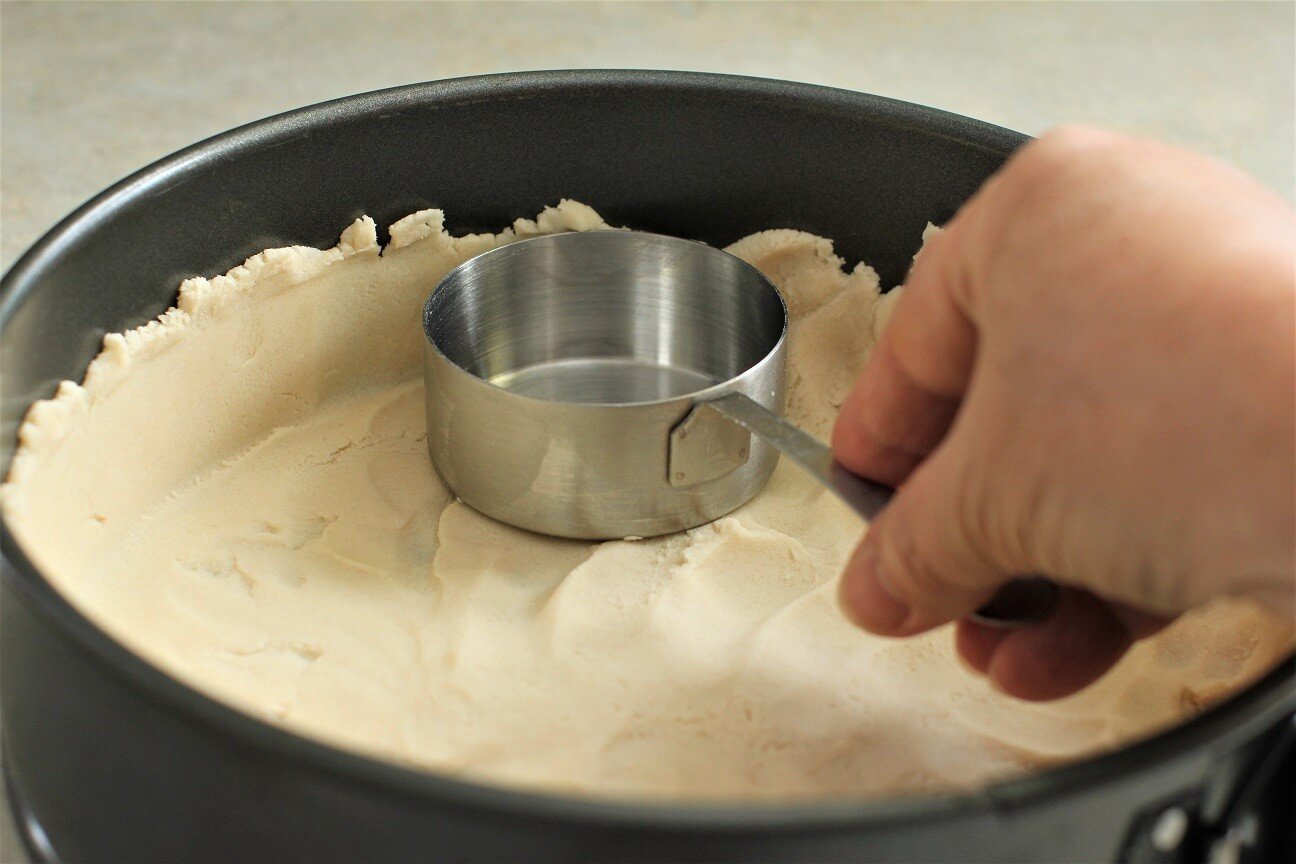 Even out the top of the crust. If you want, you can make it fancy by pushing down with the rounded part of a small (¼ teaspoon) measuring spoon to make pretty scallops all around the top edge. 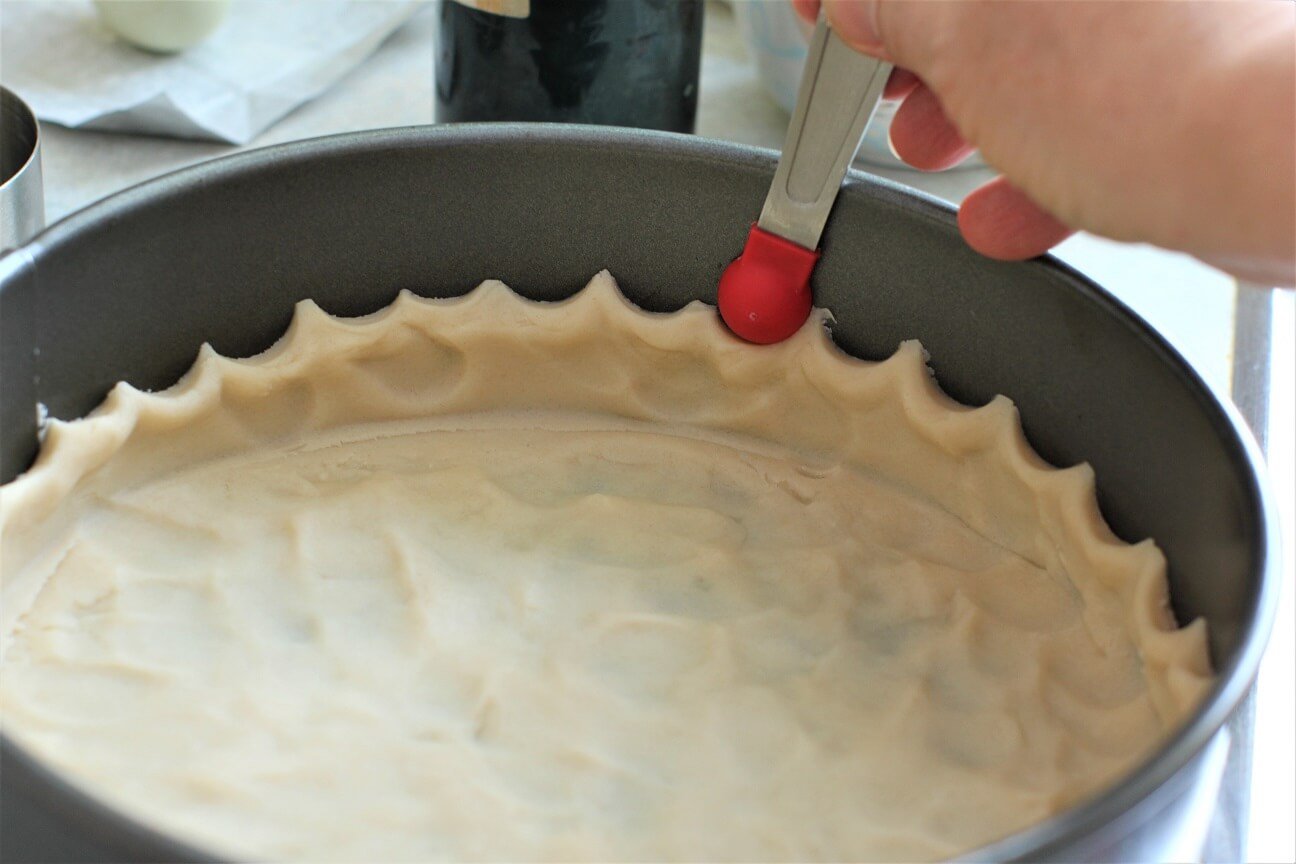 Don't even clean the mixing bowl - just pop the filling ingredients in (package of cream cheese, egg, bit of sugar, and vanilla) and beat it all up to a smooth mass. Pour that onto the crust. 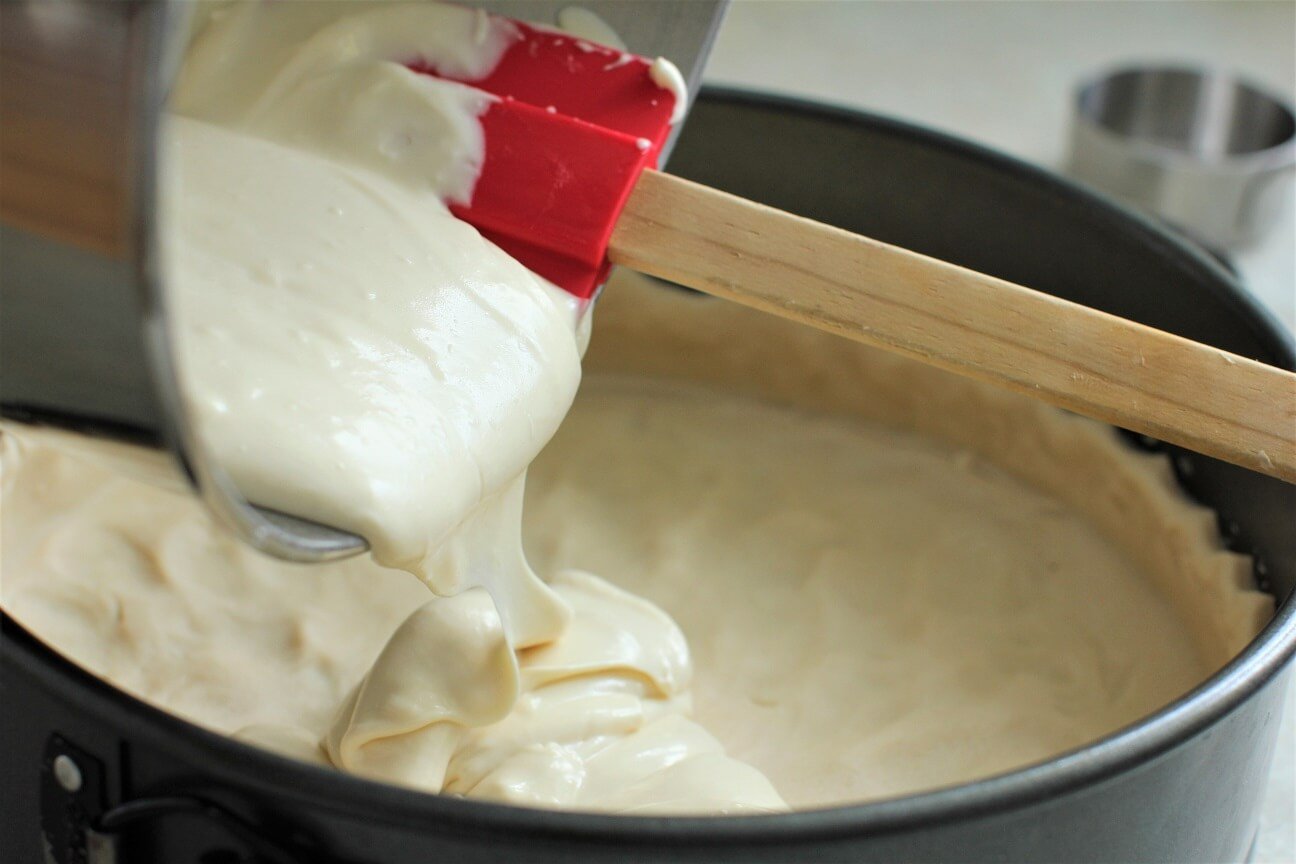 Now peel and core three or four of those delicious Cosmic Crisp apples, and cut them into thin wedges (sneak a few to nibble on - I won't tell).

Toss them with a whiff of sugar (don't need much, as they're naturally sweet and tangy) and a kiss of cinnamon. Pile them onto the cheesecake layer. You can arrange them in a charmingly haphazard way, or get fancy and lay them out in beautiful concentric circles. (Guess which way I went?)

The Cosmic Crisp apples stay fresh and lovely, so even if you get called away to the telephone in between, you don't have to worry about the slices browning. 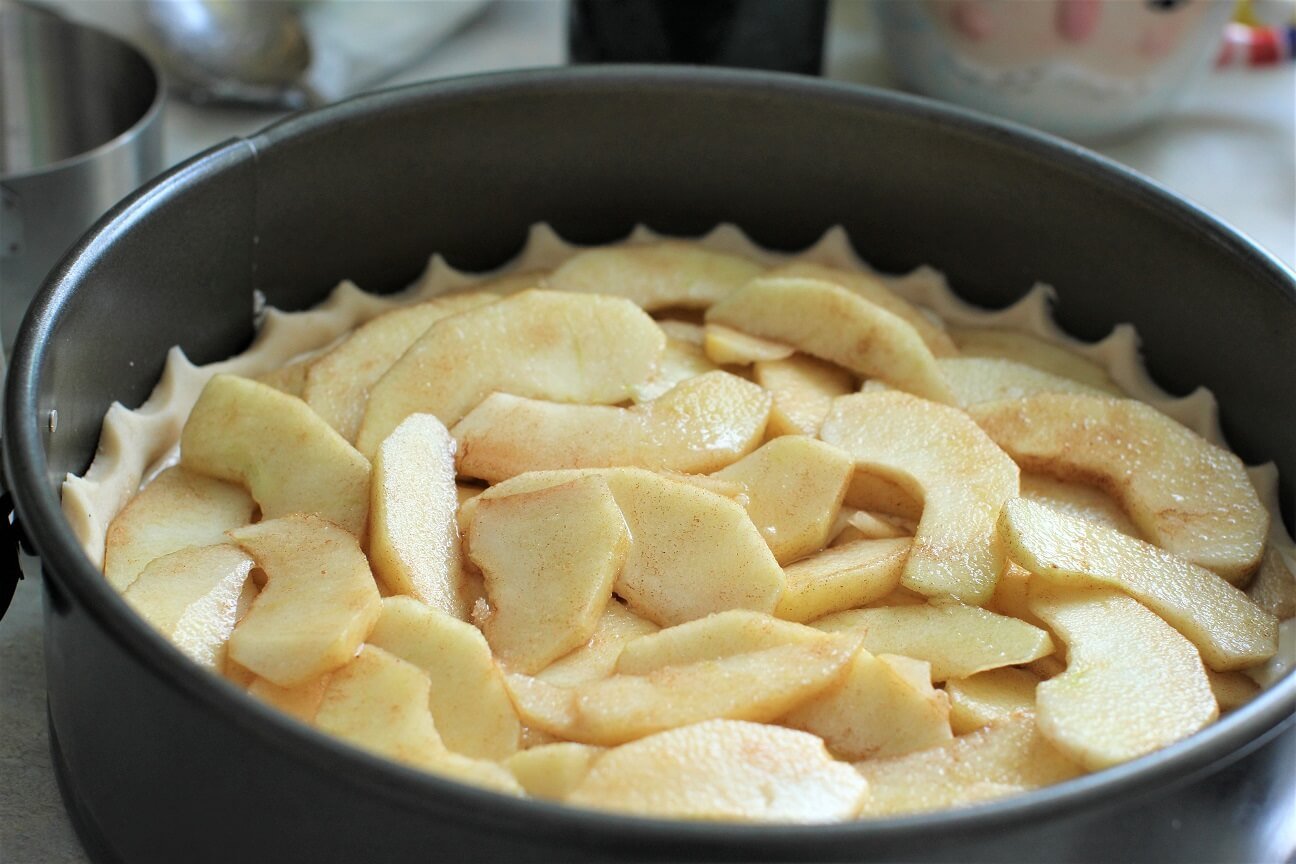 Then all that's left is a sprinkling of sliced almonds and a stint in the oven. 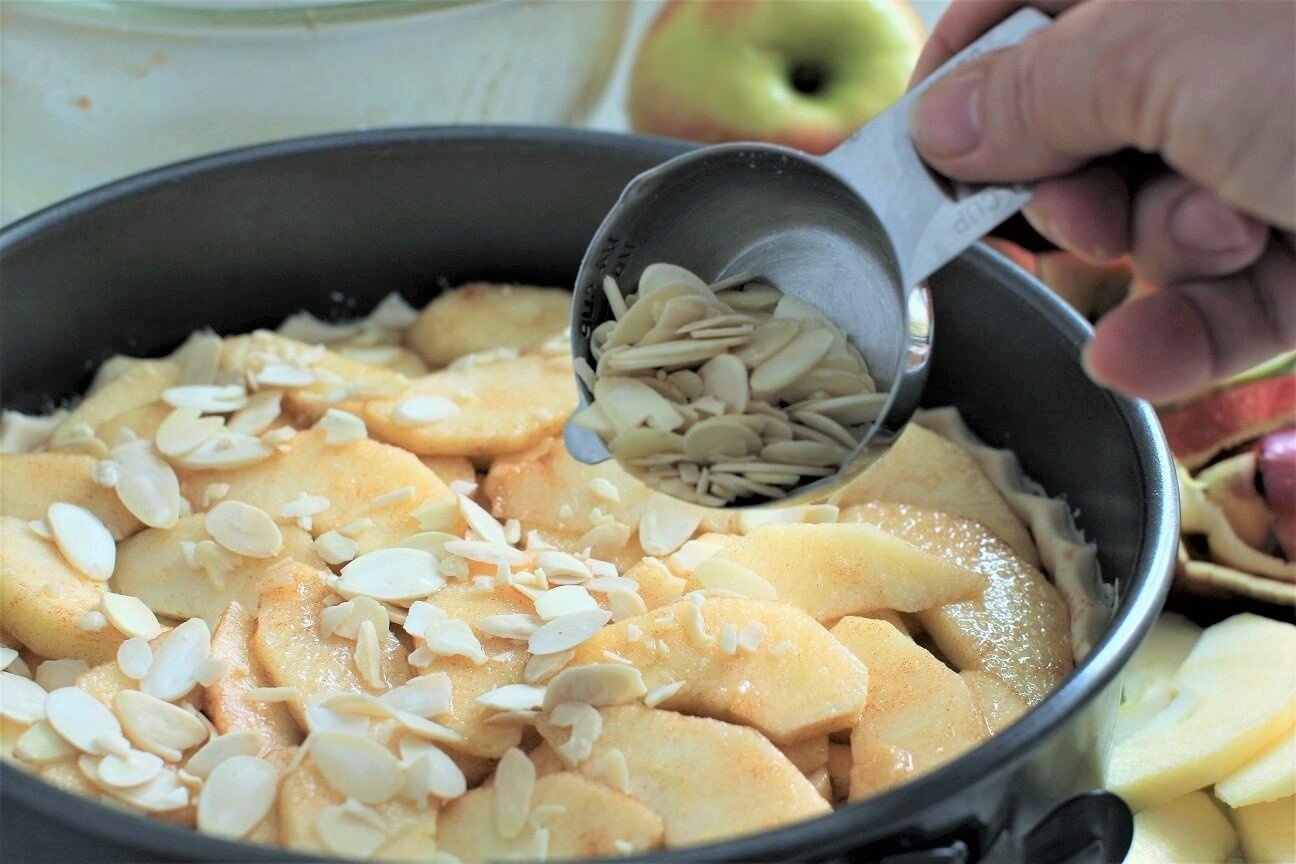 When the cake is golden and delicious-looking, cool it and pop it onto a plate. Dust with icing sugar and serve with whipped cream. 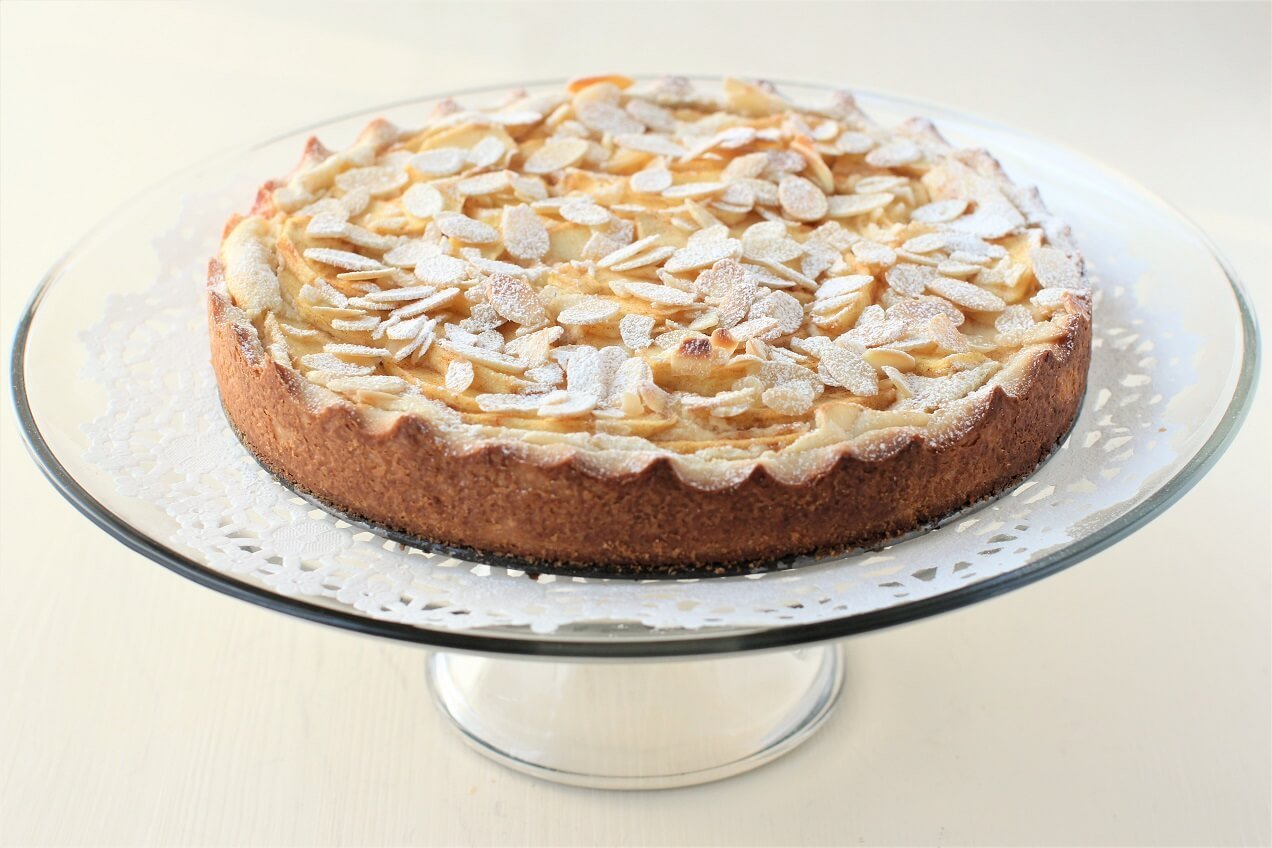 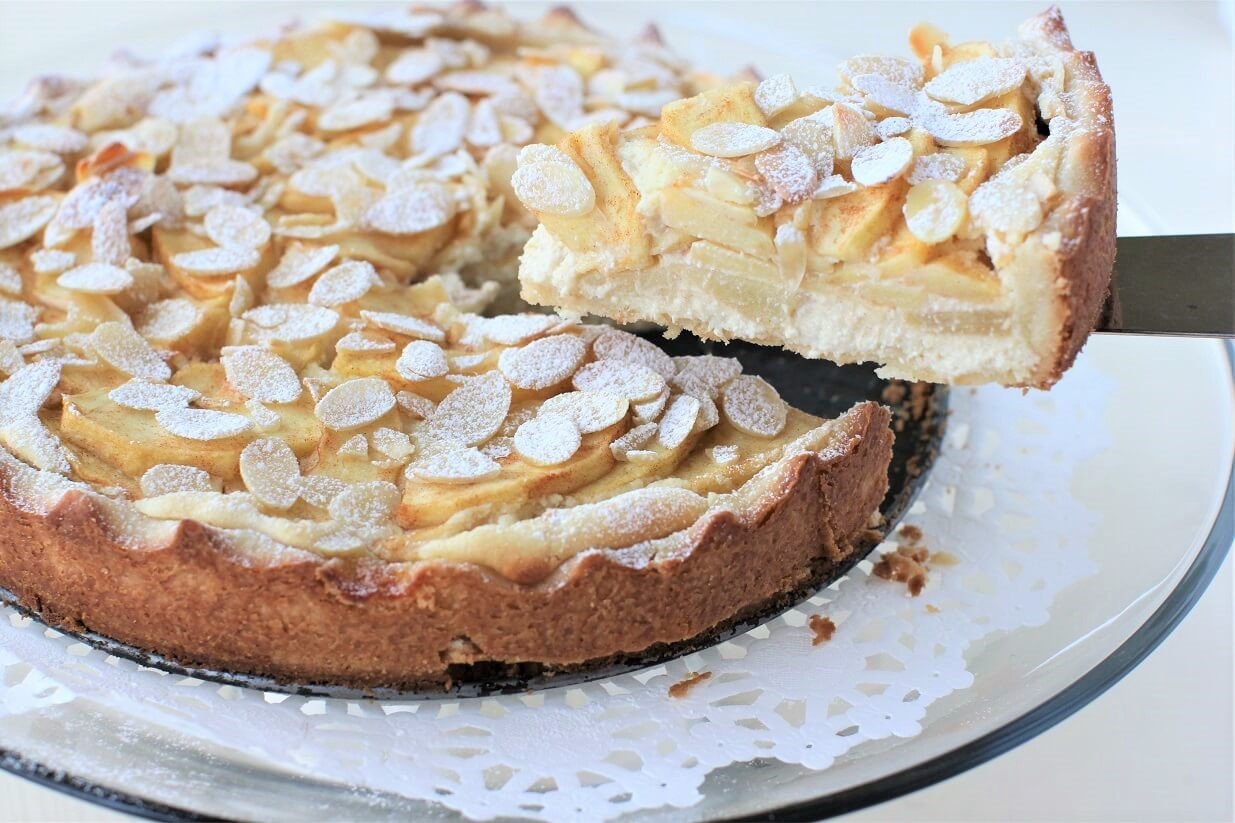 Take a bite of that lusciousness, enjoy the taste sensation, and let the world stop for a moment. This is bliss. 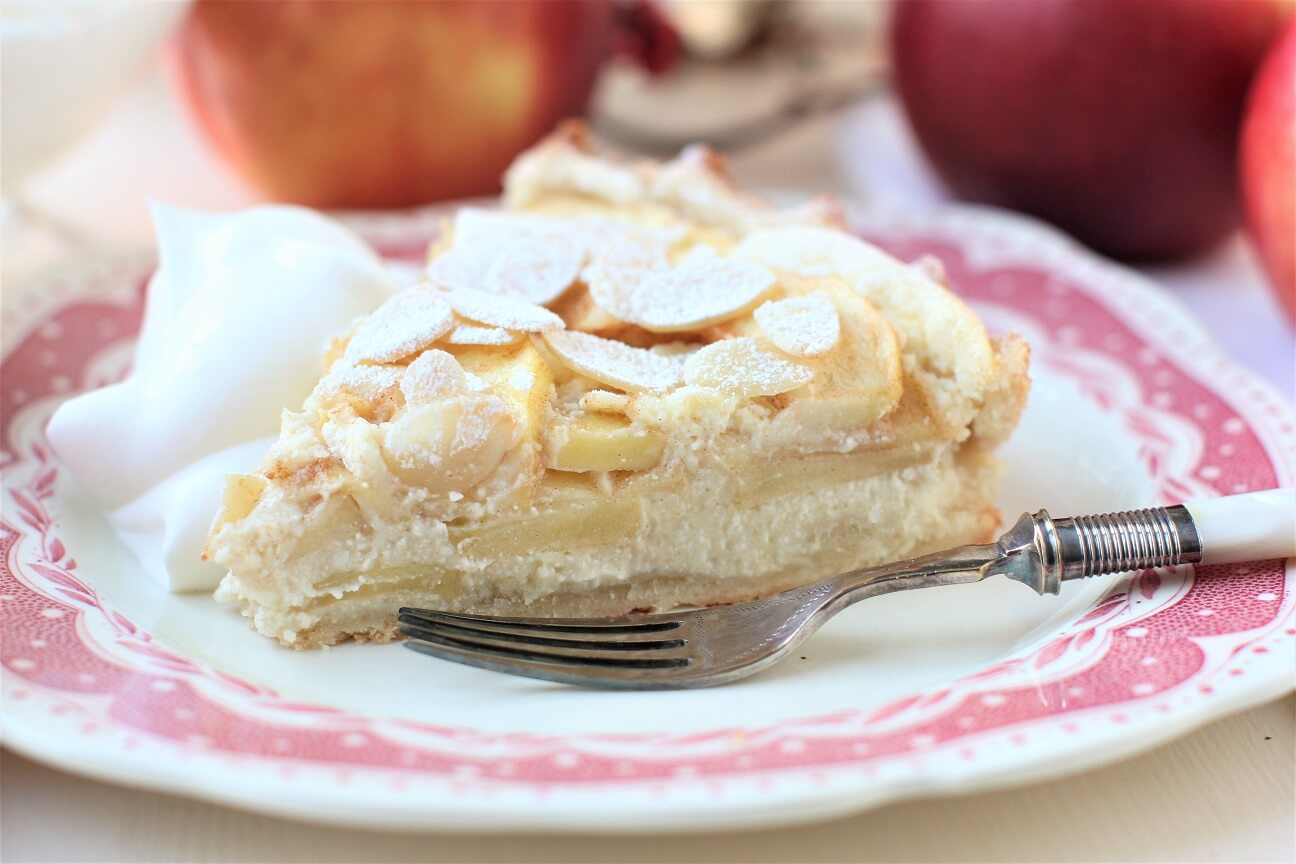 This recipe comes from a Swiss friend who's a wonderful baker (thank you, Elsa). I've adapted it slightly - reducing the sugar to let the wonderful natural sweetness of the Cosmic Crisps shine through.

If you grab yourself a basketful of Cosmic Crisp apples at your local grocery store, you'll be all set for snacking over the holidays. Store them in your refrigerator's crisper drawer to keep them fresh and crunchy. They're great for slicing and nibbling, or for serving on a fruit platter with a light dip (especially great because they don't get brown quickly). Use them to make this Festive Waldorf Salad for your holiday menu - an elegant and colourful version of the delicious classic, or change it up and make up a batch of Apple And Shrimp Salad Rolls for a lighter meal as a change of pace during the holiday festivities. And they work especially well in this healthy breakfast version of Bircher Muesli if you want a light and easy way to start your day after a little too much feasting.

Enjoy Cosmic Crisps while they're in season - they're like a special little gourmet gift to yourself! 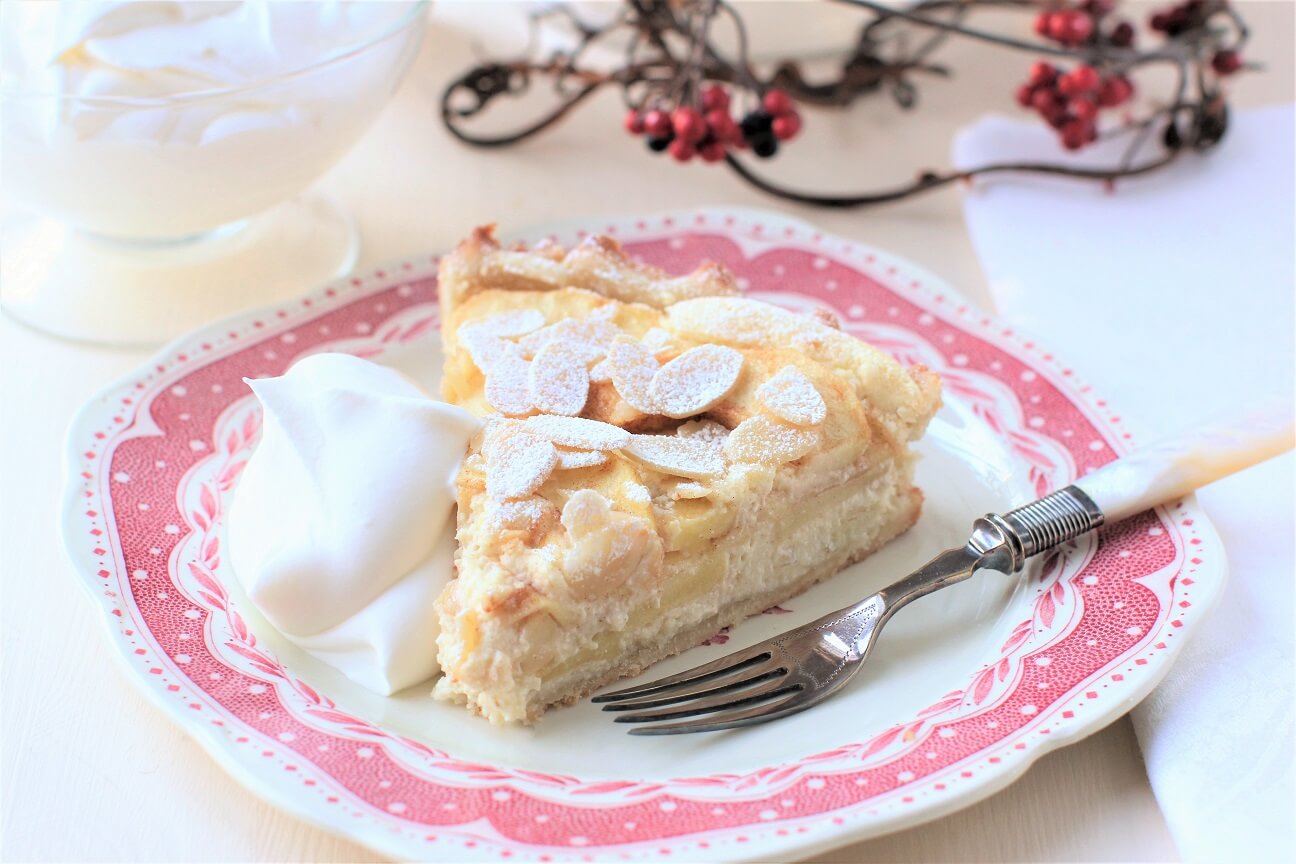 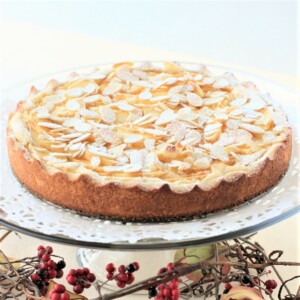 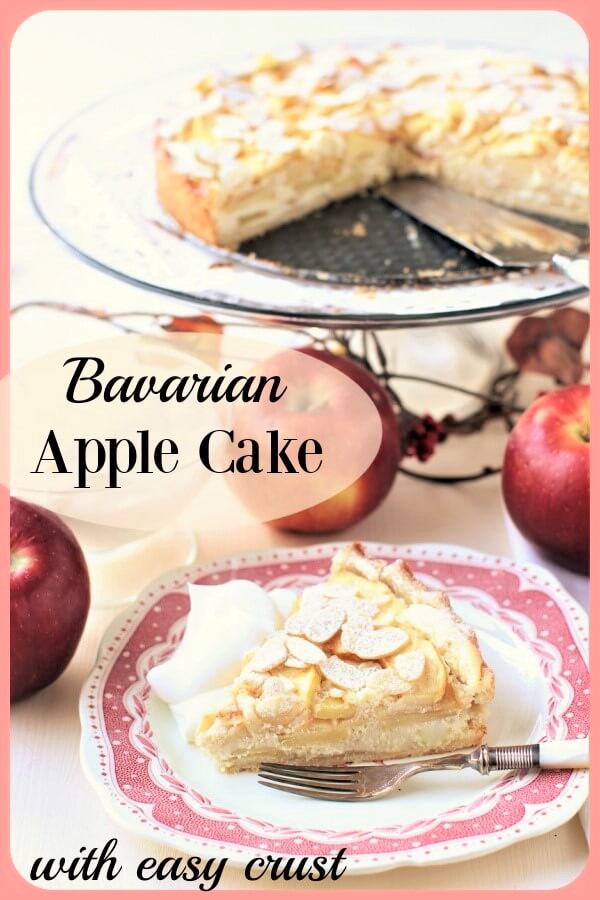