Barbecue Ribs can also be made in the oven - a long slow roast makes them meltingly tender. Then a kiss of your favourite barbecue sauce and a quick blast of high heat turns those ribs finger lick'n sweet and sticky - the best! You'll have perfect ribs every time.  (Skip to recipe.) 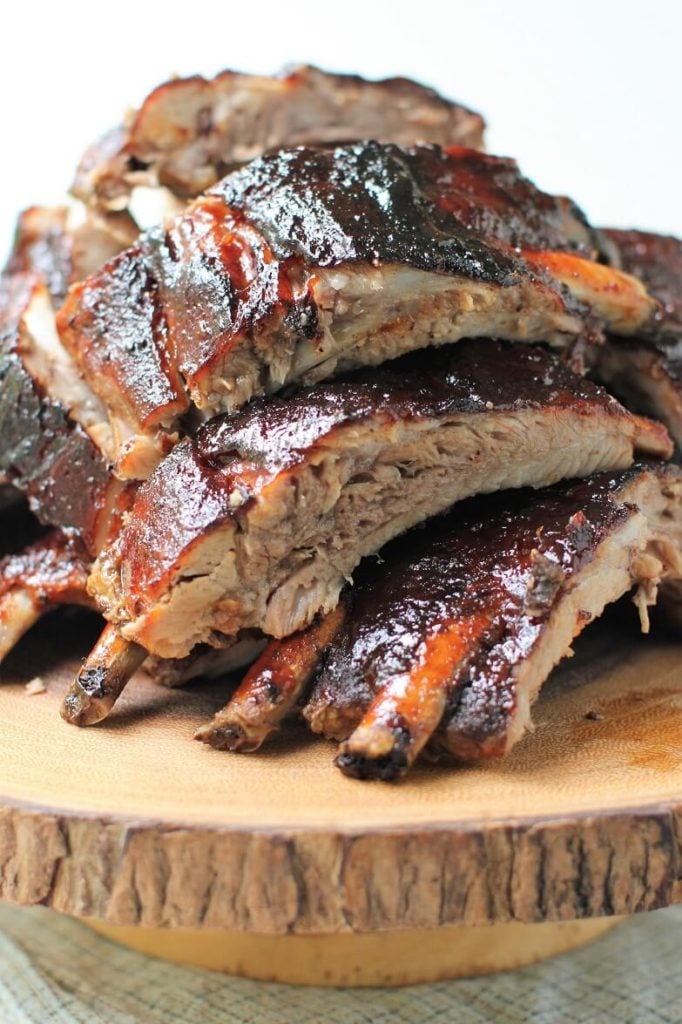 Here's the recap from the rest of my recent trip to St. Louis, Missouri. My daughter and I spent a great week there. (See here for Part 1 and a recipe for Shrimp & Grits.)

On one day day we took a trolley car tour of the city. We were the only two people in the trolley! (We realized that school was back in and there weren't a lot of tourists around - a good time of year to go). Driving around the beautiful city, through serene and splendid old neighbourhoods with stately homes, and through the massive Tower Park (at 1293 acres, this urban park is 453 acres bigger than Central Park in New York City!) we could really imagine the splendour of St. Louis during its heyday in the early 1900s, when it was the fourth largest city in the U.S. In 1904 it hosted the Summer Olympics and the St. Louis World's Fair - where the ice cream cone was invented.

And of course . . . we just had to . . . settle in with dinner in front of the TV one night and watch the classic Judy Garland Movie Meet Me in St. Louis. It definitely set the mood for our sightseeing. As I spent hours strolling through neighbourhoods all around our place, I could just imagine scenes from the movie playing out. If I was any kind of a singer, I'd have been belting out some of the catchy tunes from the movie.

We wandered around The Hill (St. Louis's Little Italy), and discovered this amazing gelato, 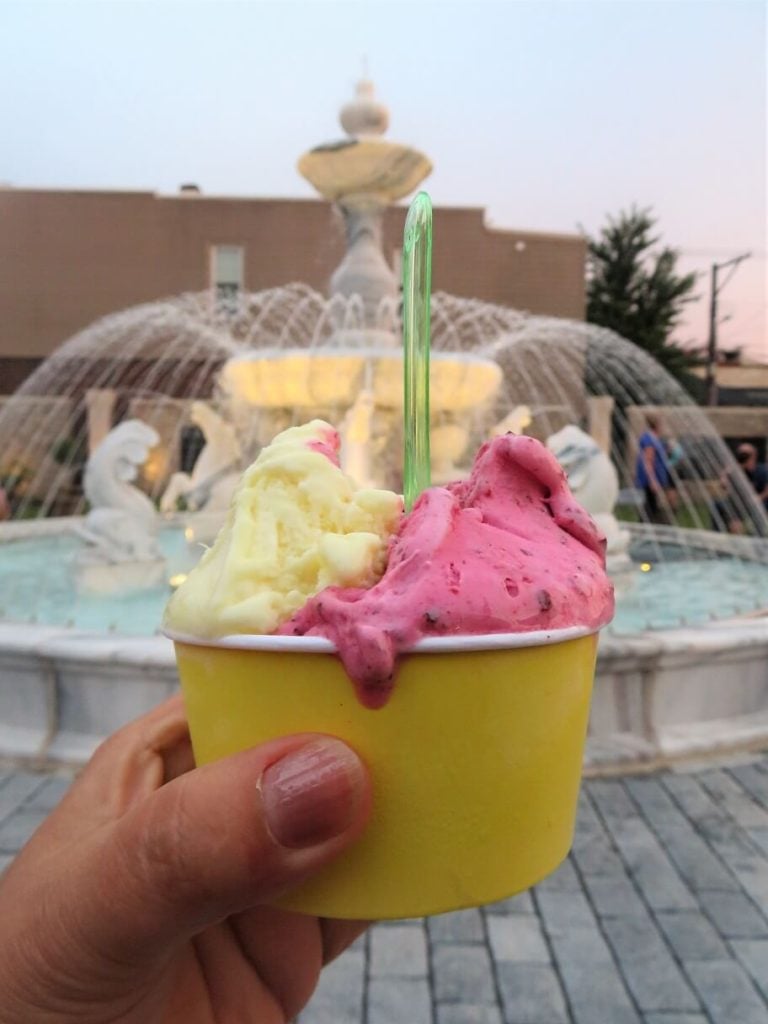 which we enjoyed in this little fountained courtyard as the sun slowly set and the lights came on. 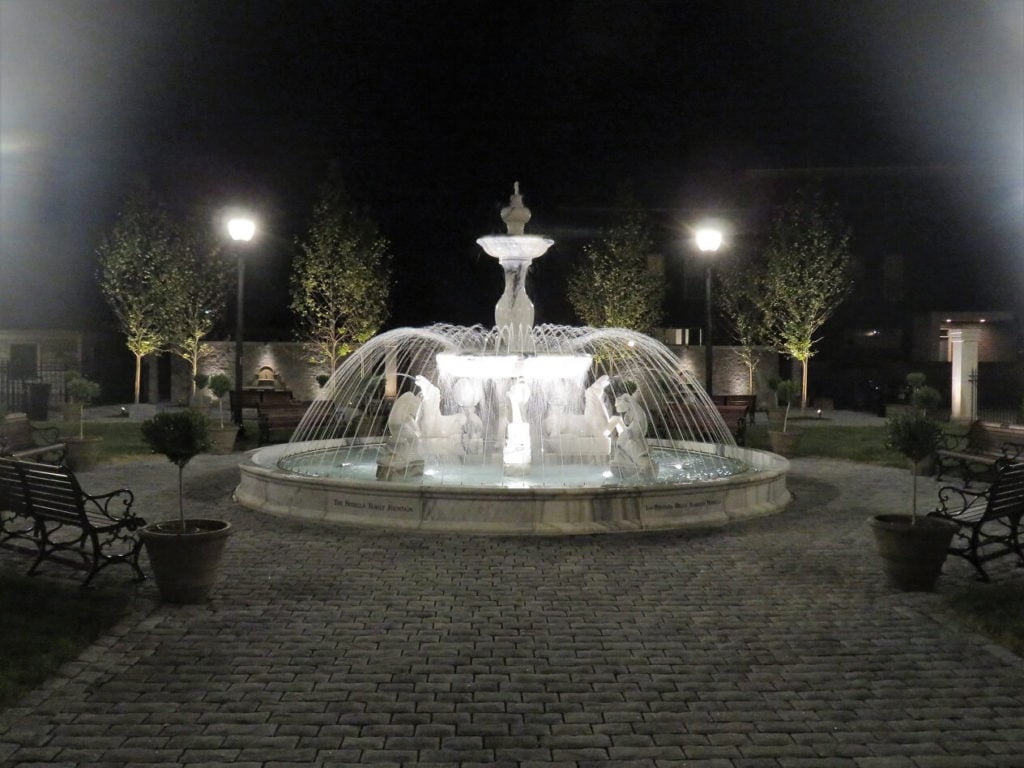 The most memorable thing about St. Louis, for me, however, was the homes; street after street lined with tall, two story, red brick homes. Bricks everywhere! One of the Uber drivers told us it was to keep the houses intact during the frequent tornadoes in the area, another said it was because of all the mud from the Mississippi River that was cheap, easy, and local for making bricks. Whatever the reason, it added a warm charm to the city's neighbourhoods. Here in Alberta, land of wooden houses, bricks are expensive and 'fancy'. 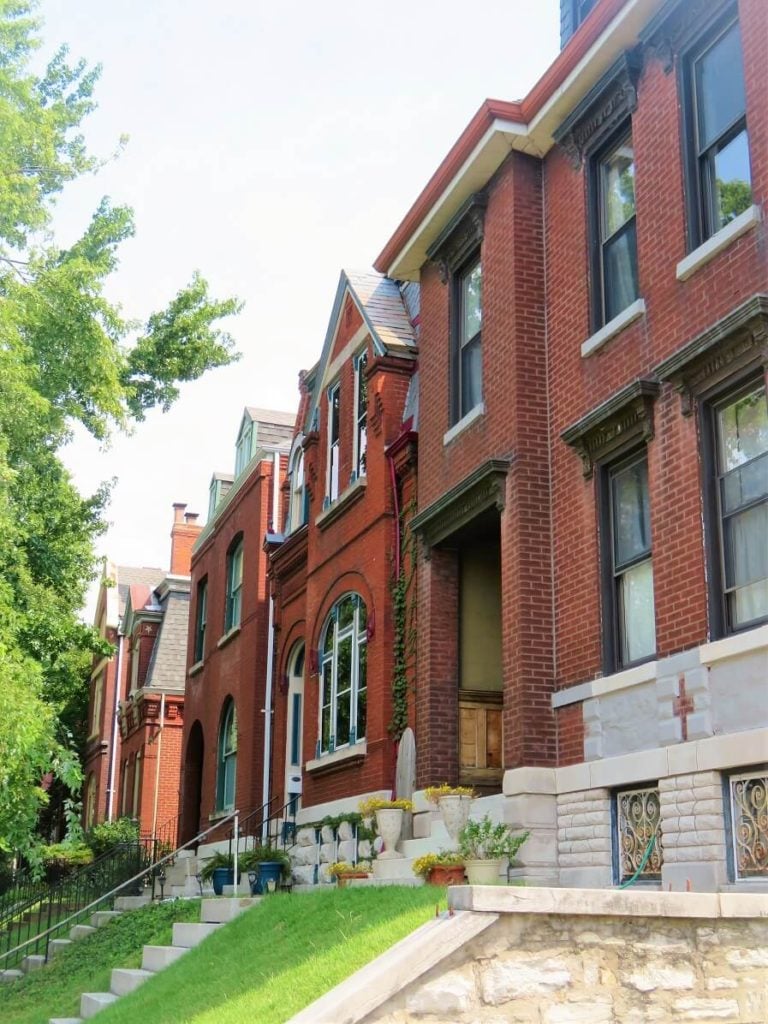 I walked around with a crick in my neck from constantly craning my head up to look at all the houses as I walked by. 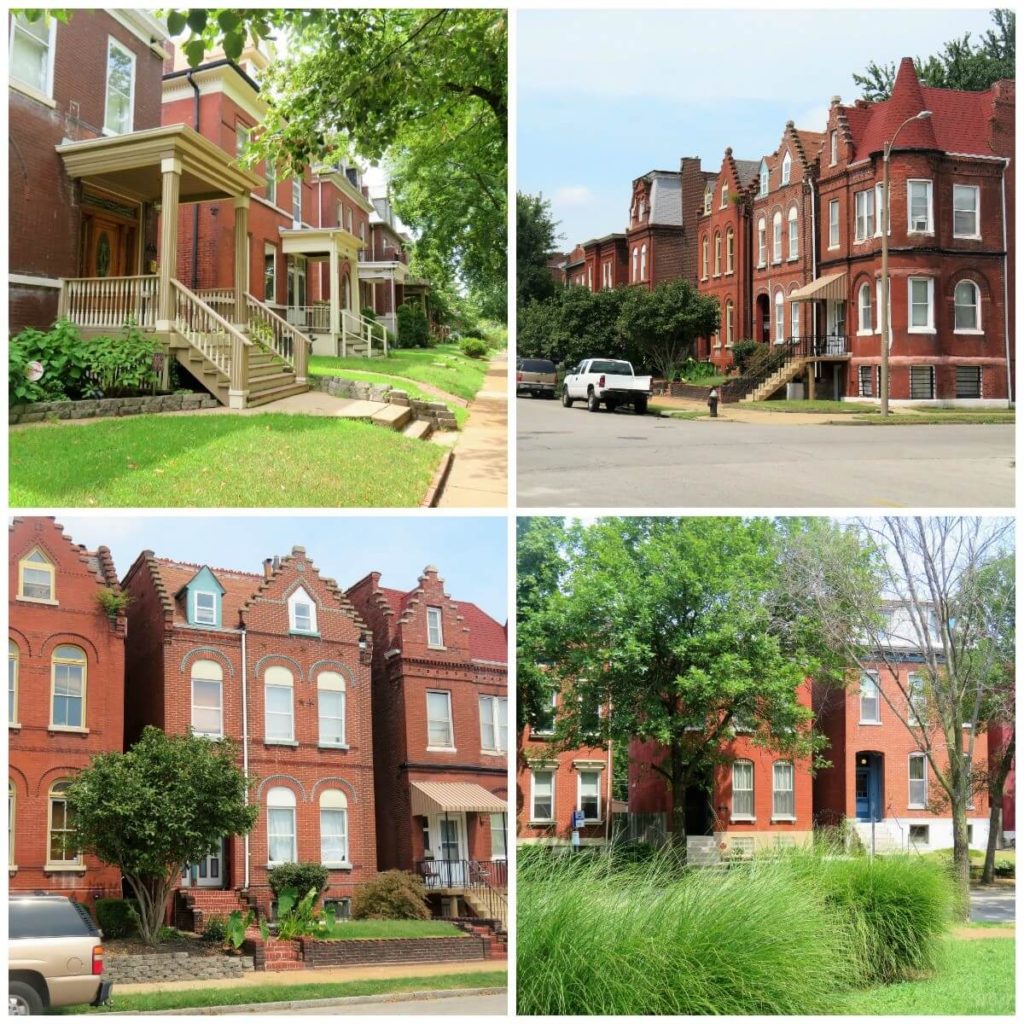 The Airbnb we rented was in one of those gracious homes, lovely and light inside, with 10 foot ceilings and lots of space, unfortunately in a less than gracious older neighbourhood that had fallen on hard times and was definitely in need of some TLC (what you don't see in the photos when you book it).

But back to those drool-worthy ribs; as I mentioned last post in St. Louis Part 1, we had a feast on St. Louis style barbecue at a restaurant called SugarFire Smokehouse.

I brought a jar of the sauce home and used it in my family's favourite, classic, tender barbecue ribs. Ooh, baby!

These ribs are so easy - oven-baked and only four ingredients! All you need is about 5 minutes of time and then let them do their thing in the oven for a few hours. When they're done, you've got the most moist, tender fall-off-the-bone meat coated in a sweet, spicy, smoky, sticky glaze. You just have to lick your fingers to get at every last bit of that lusciousness. Nobody will judge you.

Get yourself a couple racks of pork back ribs (more meaty than side ribs, but if you've got side ribs, those are fine, too). The only fiddly bit is to get the membrane off. You slip the tip of a knife under the membrane on the bottom side of the rack, near the narrow end.

Now you can get all that flavour right into the meat. Use chili powder as a dry rub to season the ribs. 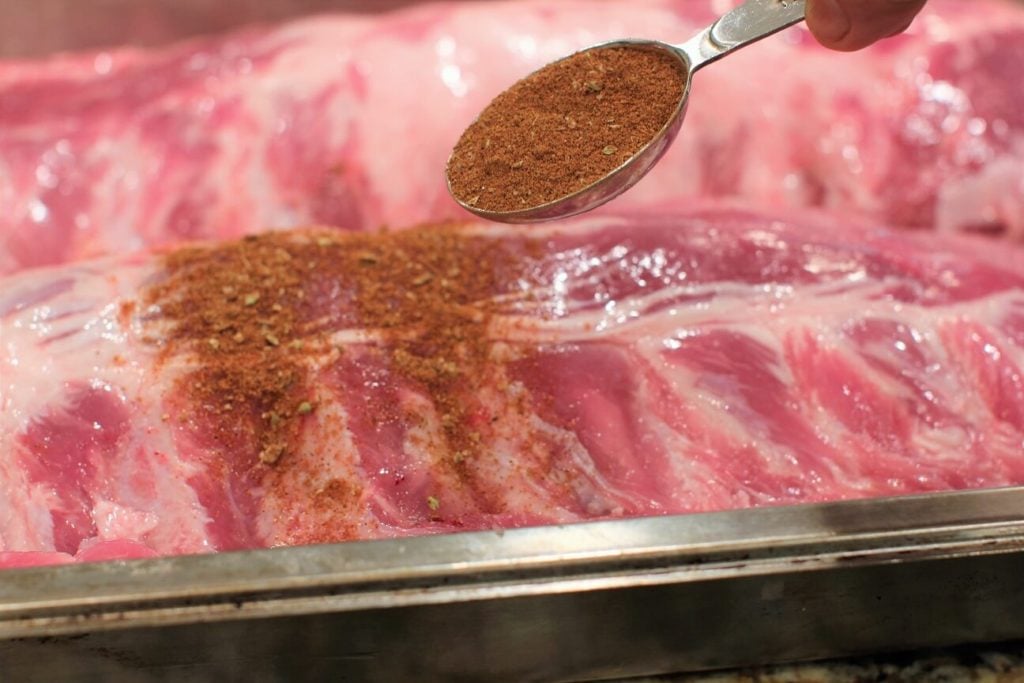 Cover the pan with foil, and bake the ribs long and slow.

Slather the tender meat with your favourite barbecue sauce . . . 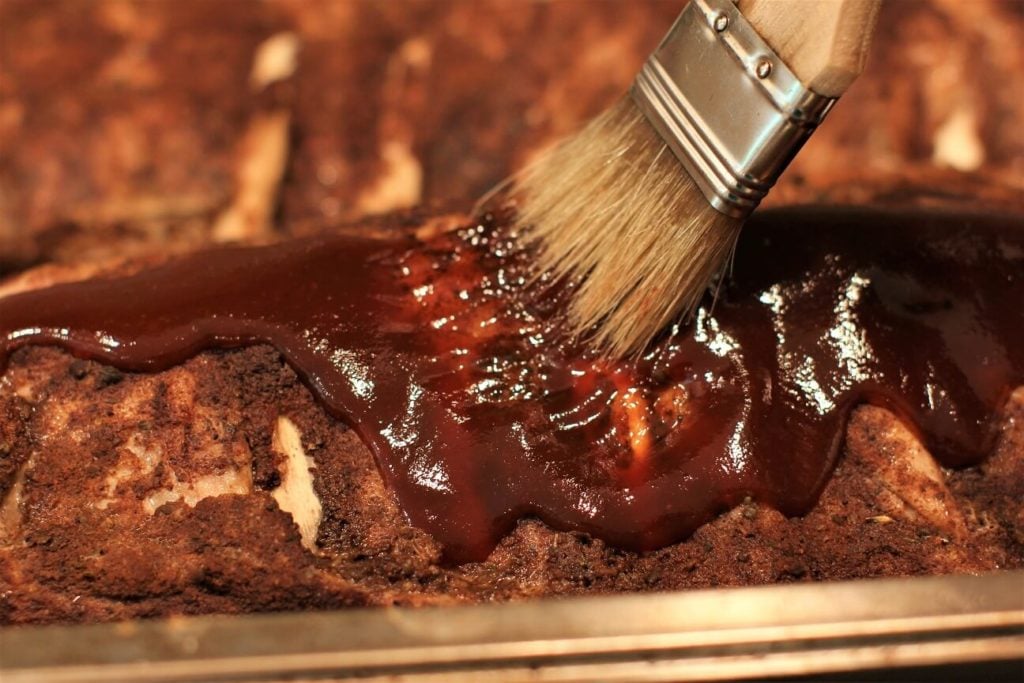 and give the ribs a short blast of high heat to add that luscious, smoky, caramelized edge.

Kitchen Frau Notes: You can use pork back ribs or side ribs for this recipe, but I prefer back ribs as they are much meatier. The amount of ribs here feeds a big crew (everybody around here fights over the leftovers the next day), but you can always make this barbecue ribs recipe with only one rack of ribs.

Chili powder refers to the spice blend, not ground chili peppers. You can use purchased chili powder or try my easy homemade chili powder - that's the one I prefer. 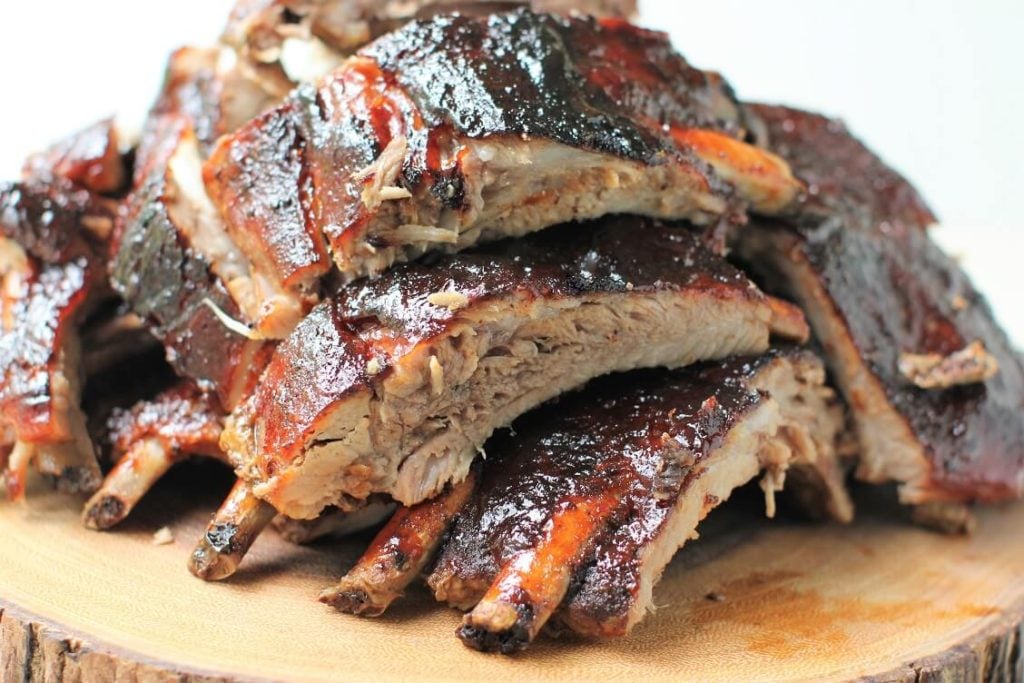 Remove the membrane from the back side of the ribs; start at the narrow end and run a sharp knife under the membrane to separate it from the bone. Use a piece of paper towel (gives you a better grip) to grab hold of the membrane and pull it off all the way down the length of the rib rack.

Sprinkle both sides of each rib rack with salt, then with the chili powder, to taste.

At this point, you can leave the two racks of ribs whole, cut them in half, or cut each into smaller 4-bone sections. Spread the ribs out in a single layer, bone-side-down in a large roasting pan. Cover the pan with a tight fitting lid or a layer of heavy duty tin foil, crimping it securely around the edges of the pan.

Place the pan into the oven, turn the temperature down to 275°F (140°C), and bake the ribs for 2½ hours without peeking.

Remove the pan from the oven and remove the lid or foil covering. Turn the oven temperature up to 425°F (220°C).

There will be some liquid in the bottom of the pan; just leave it there. Slather the top (meaty) side of the ribs with your favourite barbecue sauce. Return the pan, uncovered, to the oven and roast at high heat for 20 minutes, until the ribs look dark, shiny, and sticky. (You could also grill the ribs on the barbecue instead of finishing them in the oven.)

Cut the barbecue ribs carefully (or all the meat will fall off - that's how tender it is) between each bone or between every second bone to make serving-sized pieces. 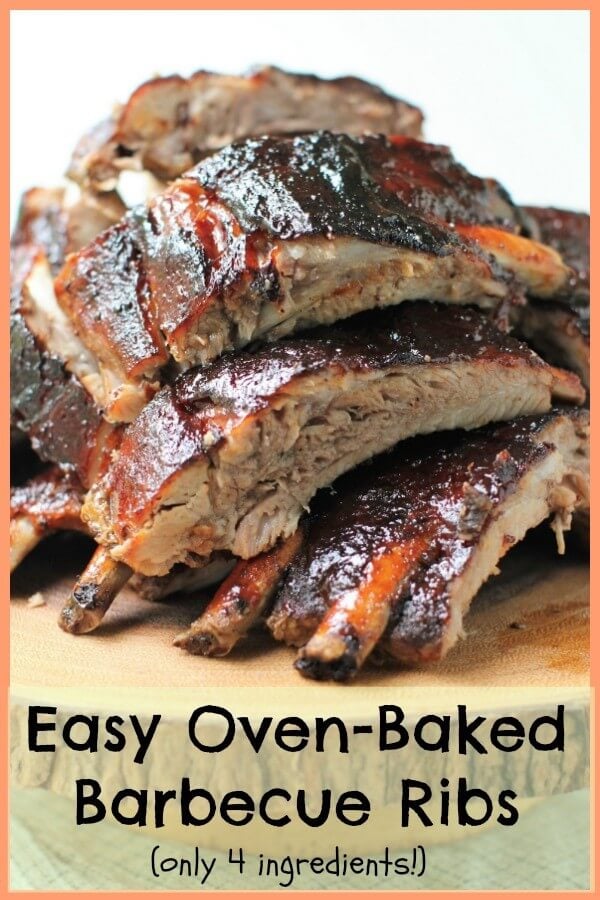 Steak and Mushrooms, a Classic