Classic southern shrimp and grits - the most creamy grits topped with succulent shrimp that are exploding with flavour - you can have this fantastic dinner on the table in under 30 minutes. (Skip to recipe.) 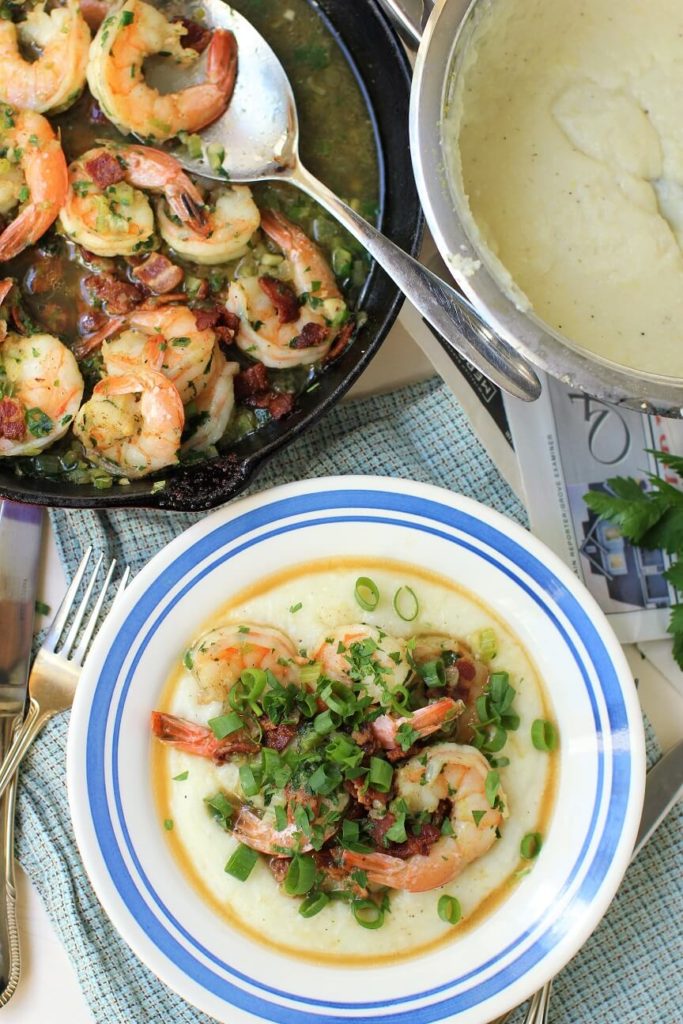 A short getaway is a treasure when life gets too busy and hectic. In August I spent a lovely week in St. Louis, Missouri. My daughter and I had a great visit together and a chance to explore. (Part 2 coming soon.)

I'd never been in the Midwest before and just loved the relaxed feel of this diverse and interesting historical city. And best of all - I found summer! Temperatures were soaring all week long (a welcome change from our rainy, cool weather). I got to wear shorts! And sundresses! And sun screen! In fact, the heat and humidity were almost too much for this transplanted northerner - but not quite. I loved stepping out from our air-conditioned rooms into the blast of delicious heat. I spent hours walking and exploring the area, as my daughter had to work during the days, so I got a lot of 'glow' on (read that as sweat dripping off my forehead, pooling in the crease of my elbows, soaking my hair, and plastering my shirt to my back). It felt great. 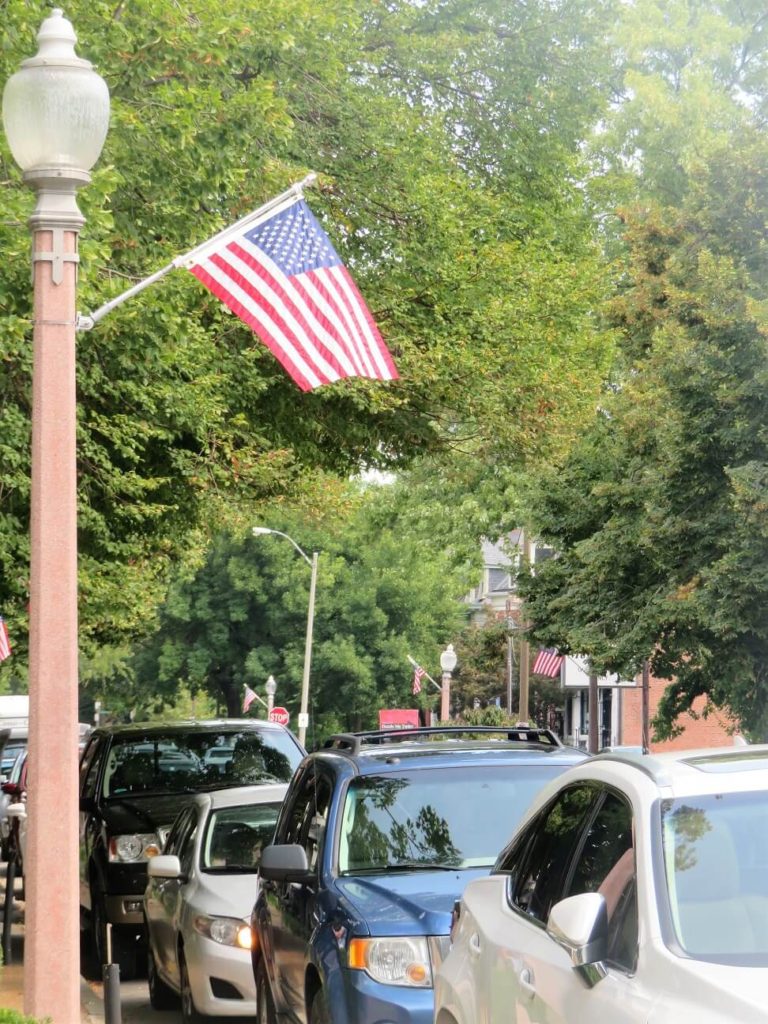 We visited the Blues Museum in downtown St. Louis. 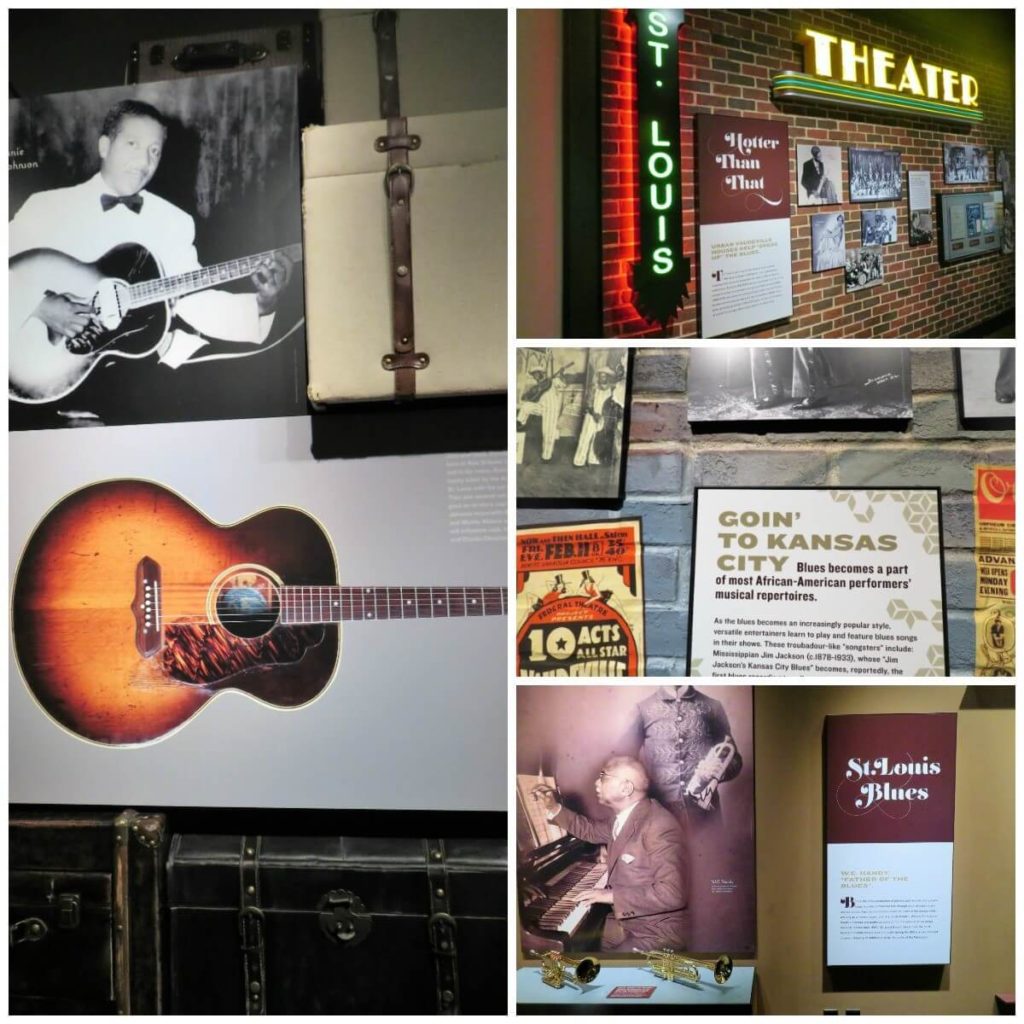 I didn't know a whole lot about the blues and was enthralled with the history of this music genre, started in the deep south and the forerunner of most types of music that followed. The Blues has its roots in African tribal music and in the rhythmic and soulful chanting/singing by slaves as they worked the cotton fields in the 1800s. It stirred me in a way I didn't expect - resonating deep in my cells.

After visiting the Museum, we feasted on the outstanding St. Louis style barbecue at Sugarfire Smokehouse. So finger lick'n good. St. Louis is said to consume more barbecue sauce per capita than any other city in the U.S. (Olivia and I did our bit to keep those numbers up.) 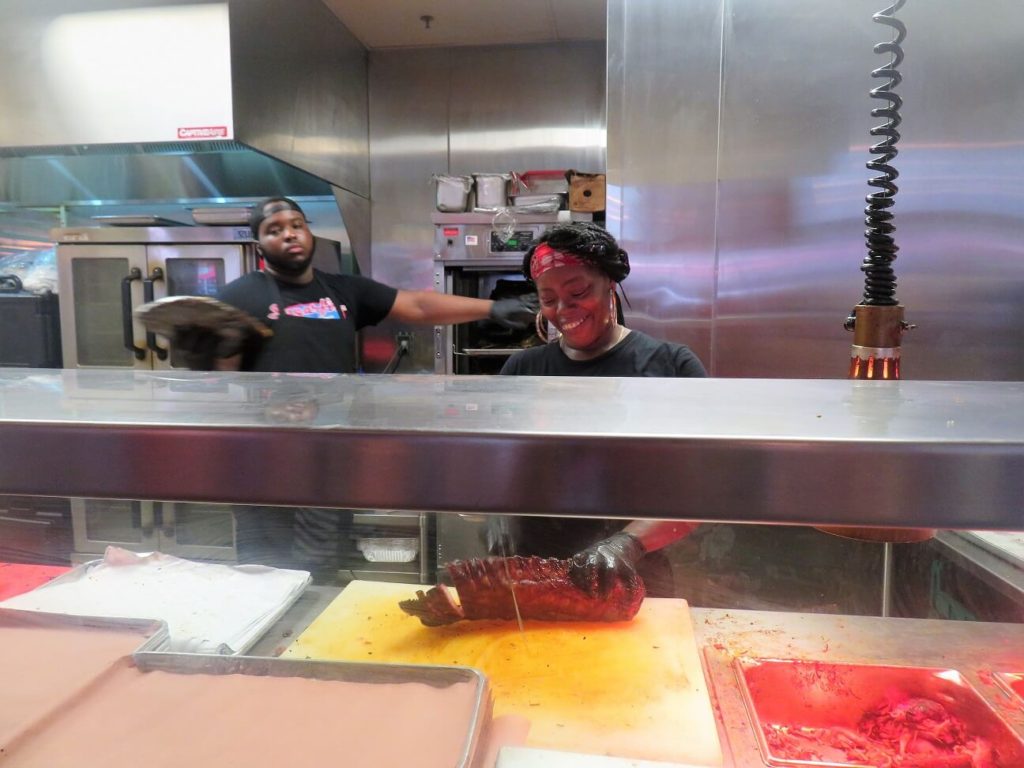 With groaning stomachs, we finished it all. 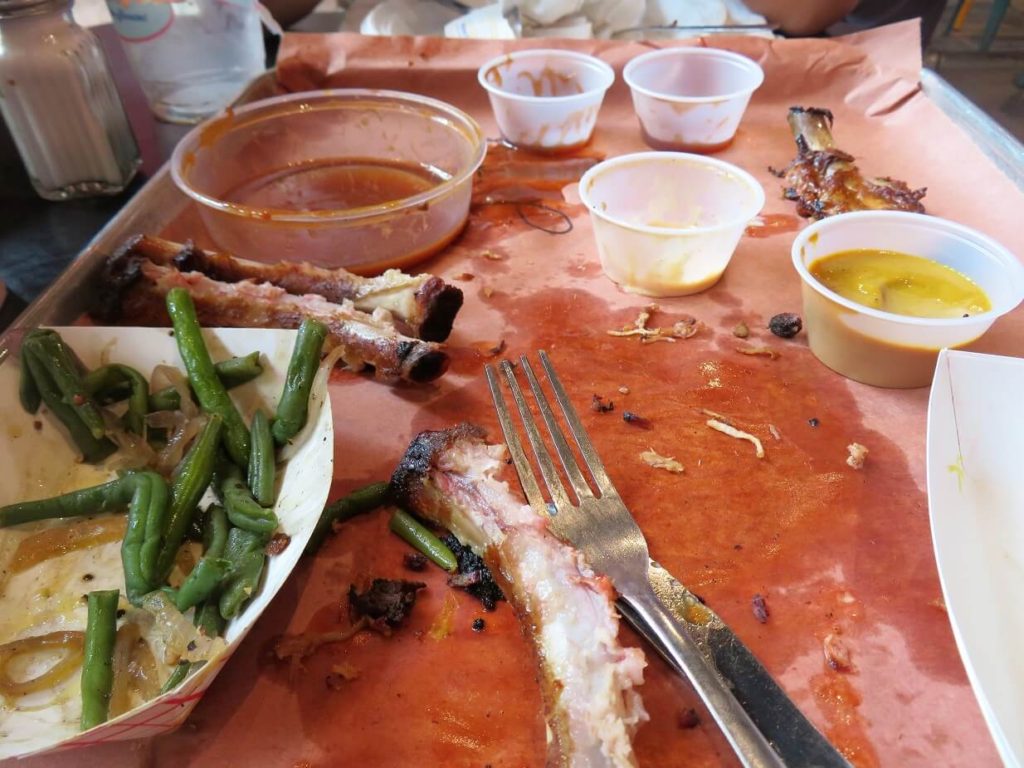 After that we waddled back to the Blues Museum for a soul-stirring, hand-clapping, foot-stomping blues concert. 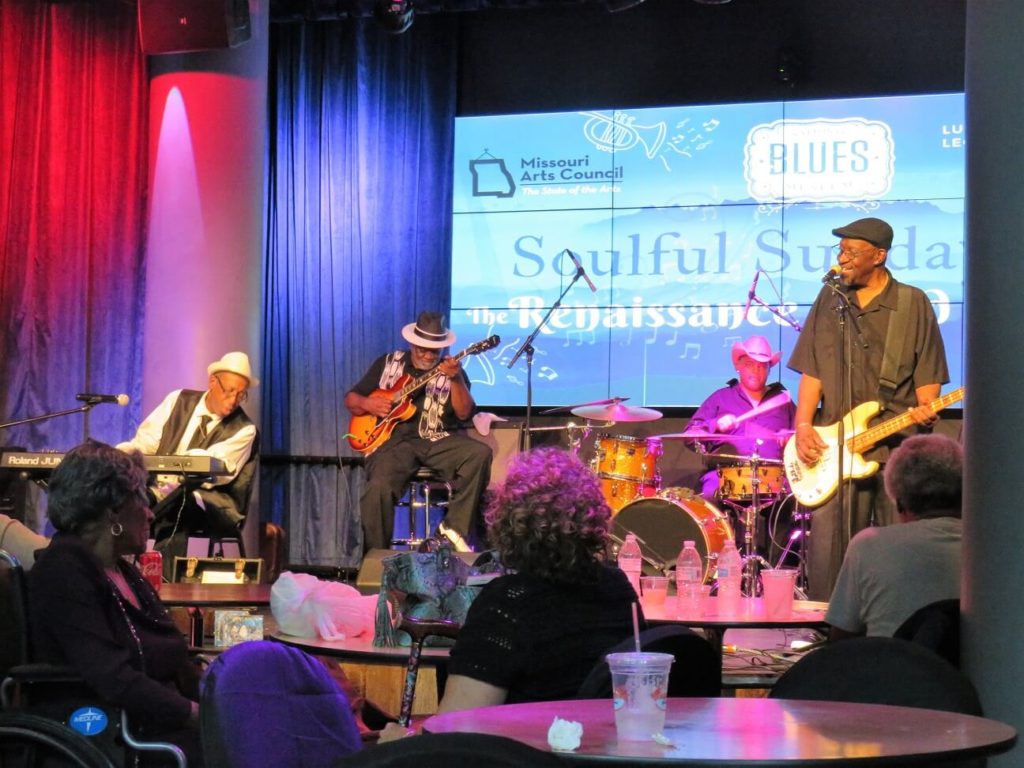 St. Louis is famous for quite a few iconic dishes (in addition to inventing the ice cream cone). It's the place where toasted ravioli were invented.

After eating this dish of grits, greens, and eggs, I was reminded of the dish I often made for our kids when they were young; grits and eggs for breakfast, with a pat of butter on top to melt into the grits. 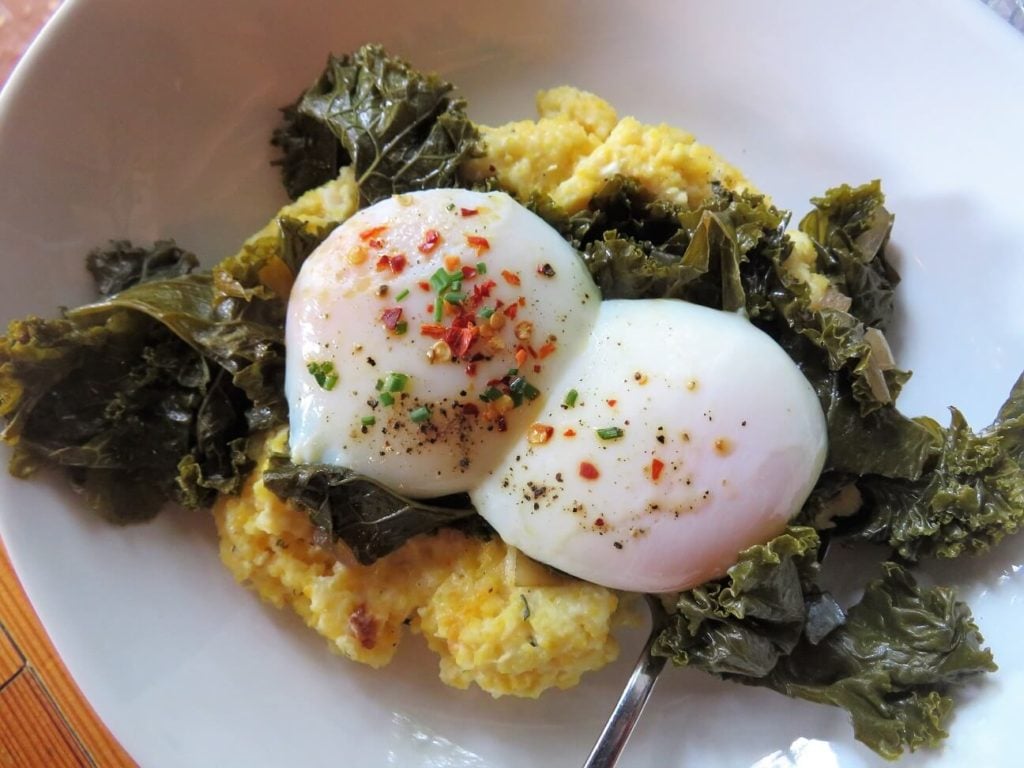 These grits were yellow, the same as the ones I'd made for my kids. However, I knew that white grits are more common in the south, so I was on a hunt to find some. The crazy foodie in me kicked in, and on one sweltering day (38°C, but 42° with the humidity factor) I traipsed all over town, looking for white grits. I finally found some at a small supermarket, staggered for ten blocks carrying them back to our Airbnb, and flew home lugging eight pounds of damn grits in my suitcase - I'm sure the sniffer dogs at the airport loved me. I knew I wanted to make shrimp and grits once I got home.

And the story had to end, of course, with two of the canisters of grits getting squashed and exploding in my suitcase all over my dirty laundry somewhere in the air between St. Louis and Edmonton. 'Twas a gritty mess, to be sure.

But I still had the five-pound bag left, so we are pigs in grit heaven.

And these grits are worth the trouble. They are made from hominy; corn that has been treated with alkali (nixtamalized, like the corn for tortillas) to make the vitamins in it more available to the human body. They can be from yellow corn or white - the white is more common in the south. Grits are similar to Italian polenta and to cornmeal, but are usually a coarser grind.

If you've never had shrimp and grits before, you are missing out! This dish is so simple, yet so loaded with flavour and comforting textures - a pillow of soft, cheesy grits under a crown of savoury shrimp and bacon - an umami explosion. It's an absolute winner.

Let's Whip up Some Easy Shrimp and Grits!

Get the grits cooking - boil the water, pour in the grits, cook them til they're creamy, then for good measure, add in some butter and cheese to make them extra luscious.

While the grits are bubbling away, whip up the shrimp. First, cook a few slices of bacon (that fantastic flavour booster), then sauté up a handful of veggies and garlic, and finally toss  in a whole bunch of succulent shrimp.

Divide the creamy grits out in shallow bowls. I used the white grits I brought from St. Louis, but you can also use yellow grits. 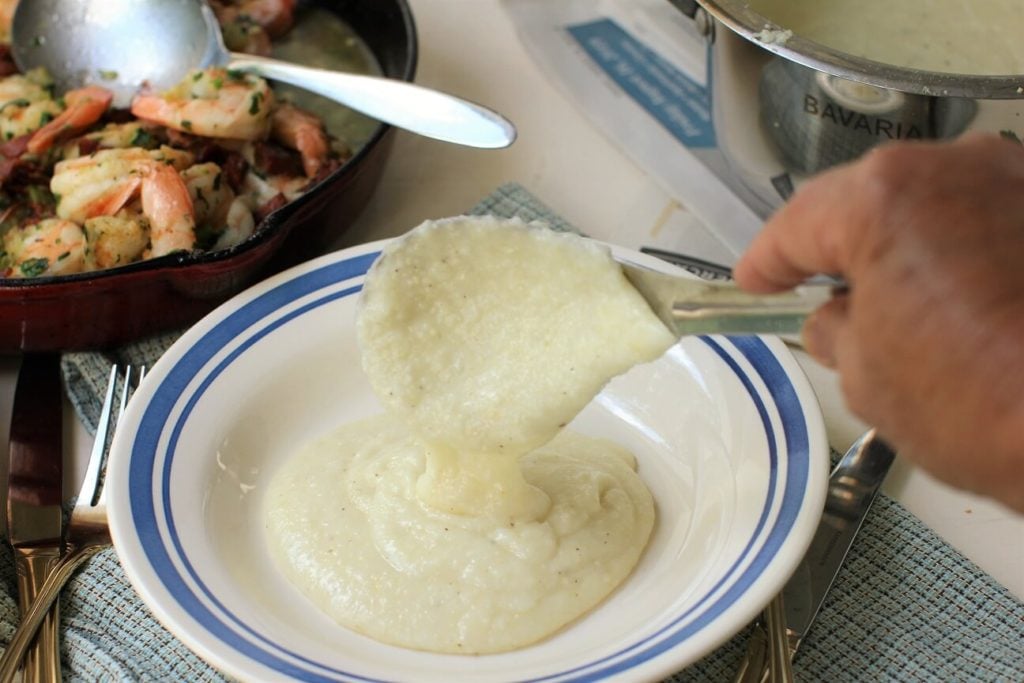 And top 'em with the tender shrimp and their flavourful juices. 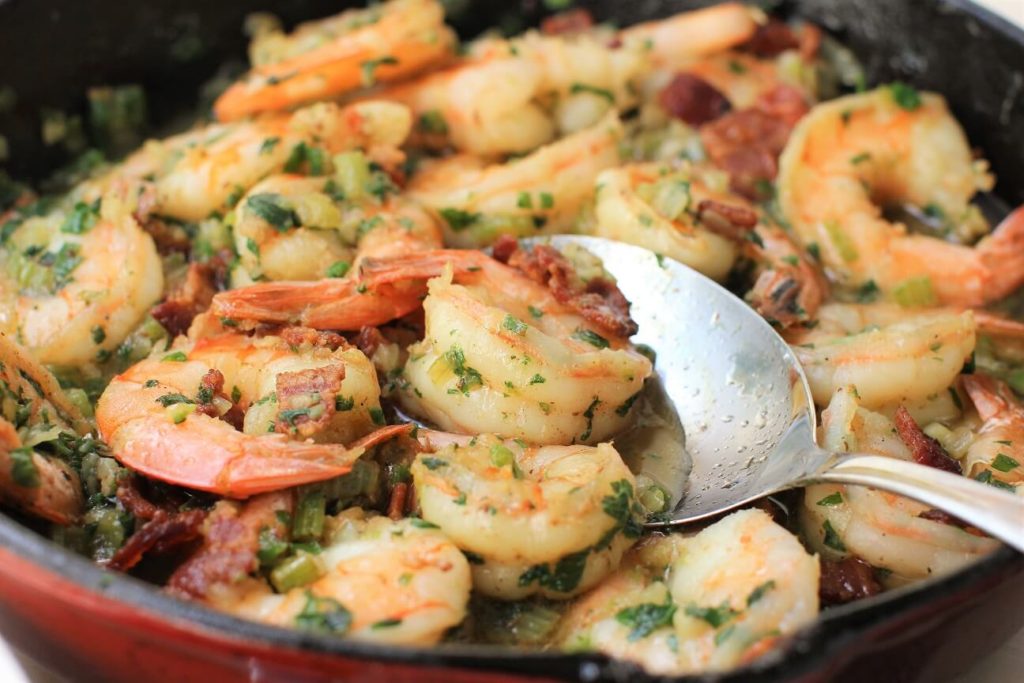 You'll have a lip-smackingly tasty meal that hits all the high points: creaminess, succulence, light but filling, loaded with umami flavour, and it's homey and comforting to eat from a bowl on a weeknight, but special and fancy enough to serve to company. 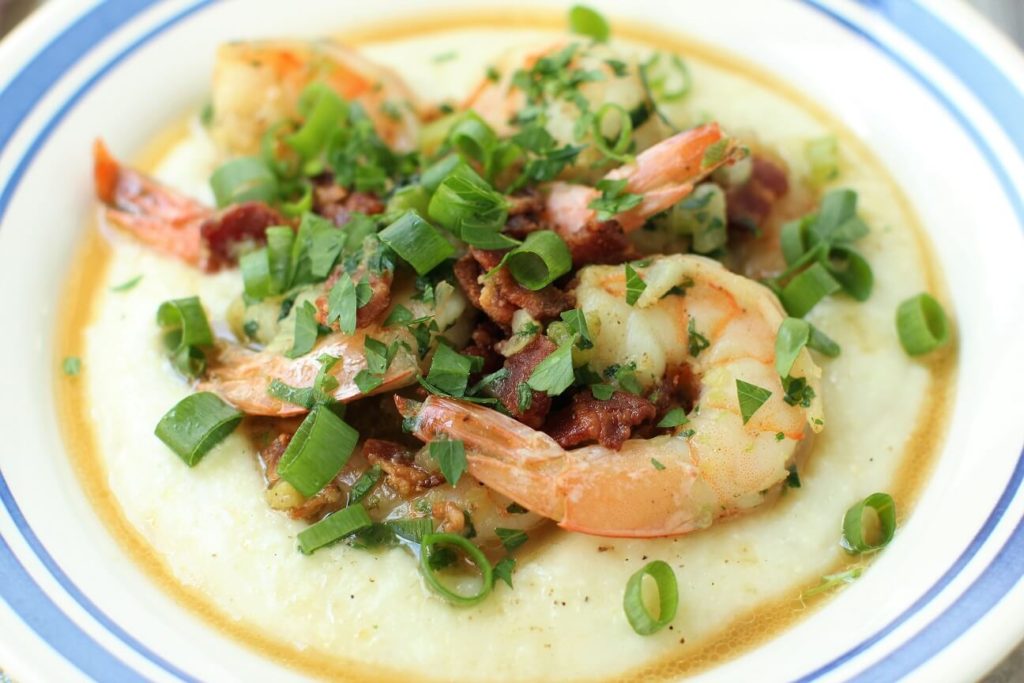 Silky, creamy, cheesy grits with the most luscious tender, succulent shrimp, salty morsels of bacon, umami drizzles of broth, and fresh bits of garden greenery. This won such rave reviews in our household, that Raymond snagged himself a container for lunch the next day as quickly as he could, and the two of us fought over the last bits in the pot and pan, finishing it all off and licking our bowls clean. Serves 4? Maybe, but not if you're a bunch of shrimp-loving, grits-fiends like we are. We'll try to restrain ourselves a bit more the next time I make it (and that will be very soon, I know).

Kitchen Frau Notes: This dinner is quick to put together if you multitask. Get the bacon and the grits started right away, then you can prepare the rest of the dish while they are cooking. Cooking time for grits will depend on how coarsely they are ground. Some can take up to 30 minutes to cook. (You can also get quick-cooking ones that cook in 5 minutes.)

White grits are classic in the south, but are not always easy to find in more northern areas. Yellow grits are fine to use instead. The taste is very similar.

*To defrost frozen shrimp, put them in a bowl and cover them with cold water. Change the water every 5 to 10 minutes, breaking apart any shrimp that are stuck together. Depending on the size of the shrimp, they will be defrosted in 20 to 30 minutes. You can speed the process up even more by putting the shrimp in a colander for the last few minutes and running cold water over them. 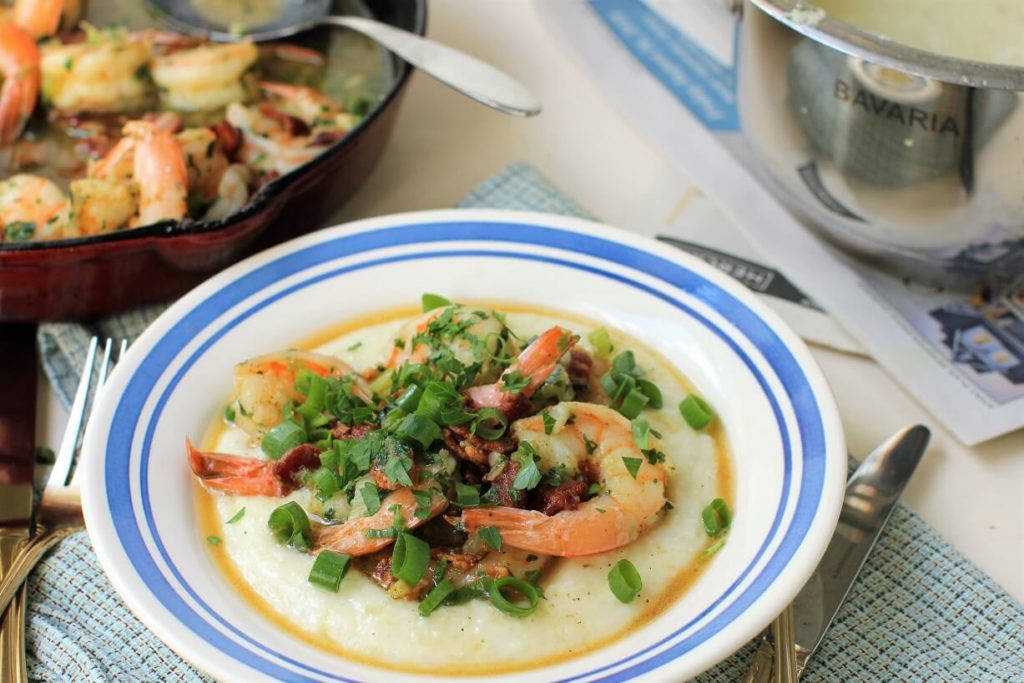 Stack up the bacon slices and cut them crosswise into ½ inch (1cm) strips. Set a large skillet over medium heat and add the bacon pieces. Cook them until they are crispy, stirring occasionally.

While the bacon is cooking, start the grits: Bring the water, broth or milk, salt, and pepper to a boil in a saucepan. Slowly pour the grits into the boiling water in a steady stream, whisking constantly with your other hand so no lumps can form. Reduce the heat to medium. Allow the grits to cook for the time recommended on the package - anywhere from 15 to 30 minutes, depending on how coarsely they are ground. Stir the bubbling grits every few minutes while you prepare the rest of the dish. If the grits are finished before the shrimp, remove the pot from the heat and cover it to keep the grits warm until serving. If the grits sit too long, they will become somewhat firm - just add water to loosen them up and reheat them. Grits should be creamy and soft.

When the bacon pieces are evenly browned, remove them to a bowl with a slotted spoon and leave the fat in the skillet - you should have about three tablespoons of bacon fat and lots of flavourful browned bacon fond at the bottom of the pan.

Add the diced onions and celery to the bacon fat and cook for 3 to 4 minutes.

Add the minced garlic and cook for 1 minute more.

Add about ¾ of the sliced green onions and 2 tablespoons of the chopped parsley (reserve the rest for garnishing the finished plates), and the cayenne and broth, scraping up any last bits of bacon on the bottom of the skillet.

Add the raw shrimp, and cook for 2 to 4 minutes (depending on the size); just until the shrimp are pink, but still translucent in the middle. You don't want to overcook them. They will continue cooking in the residual heat of the dish.

Add the bacon bits back in with the shrimp. Taste and add salt if the dish needs it - it will depend on the saltiness of the bacon and broth you used - but you may not need any salt. If the shrimp are finished cooking before the grits are done, turn the heat under the skillet to its lowest setting, cover the shrimp, and keep them warm until serving.

To serve, divide the grits between four shallow bowls and top with the shrimp, making sure each portion gets some of the flavourful juices. Sprinkle the top with the reserved green onions and parsley. 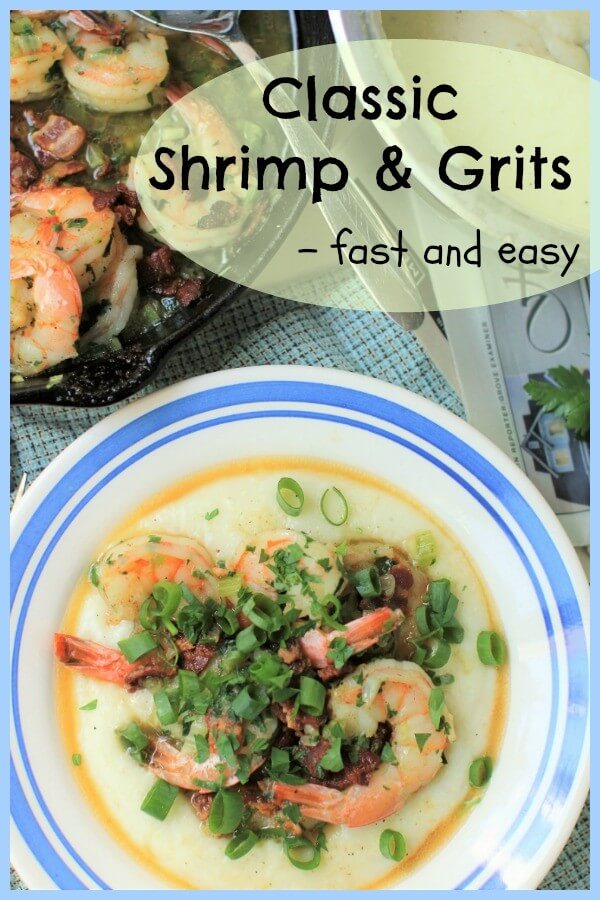