Go Greek! Whip up a savoury souvlaki marinade to turn any meat or vegetable into something delicious for grilling or roasting. Add it to chicken, pork, ribs, or vegetables. Marinate cubes of meat to make fantastic souvlaki kebabs. The easy, versatile marinade recipe will coat several pounds of meat, and extra will keep in the fridge for several weeks. 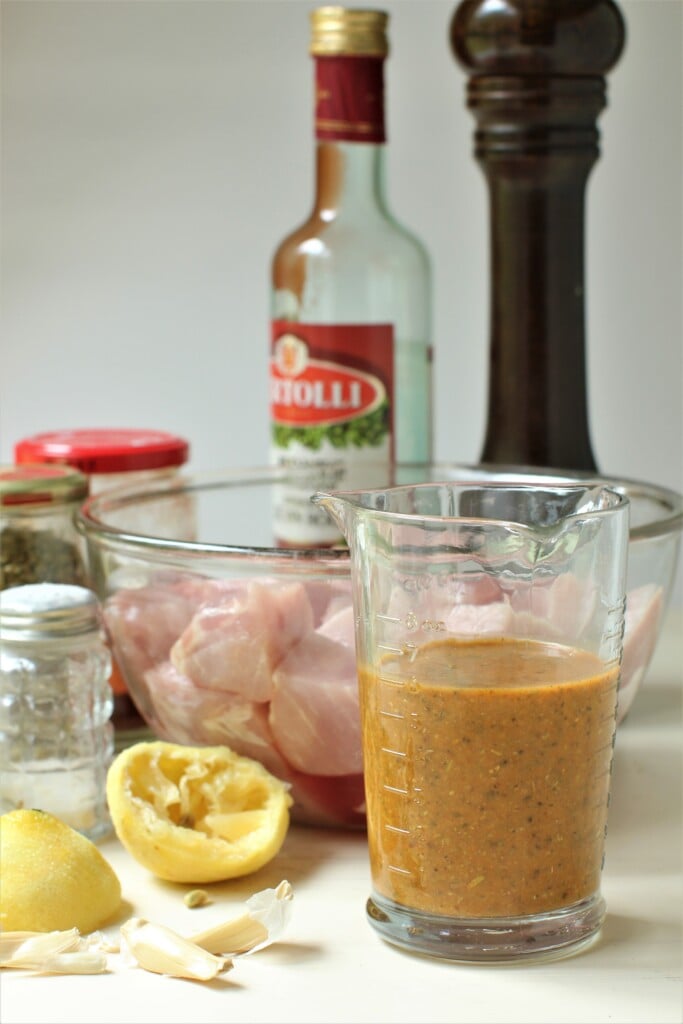 We've been grilling up a storm this summer! Covid got us started cooking meals around the campfire, and now we've been doing it often just because we enjoy it. We love sitting around the crackling fire with friends, cooking up our meal on grates over the flames while we visit and enjoy the sounds and smells of the beautiful fresh outdoors.

One of my favourite grilling recipes this summer has been Greek-style kebabs using this fantastically delicious souvlaki marinade recipe. I've made the kebabs using both chicken and pork, and have also used the marinade recipe for oven-baked ribs, pork roasts, and vegetables on weeknights indoors. It truly is a versatile recipe. 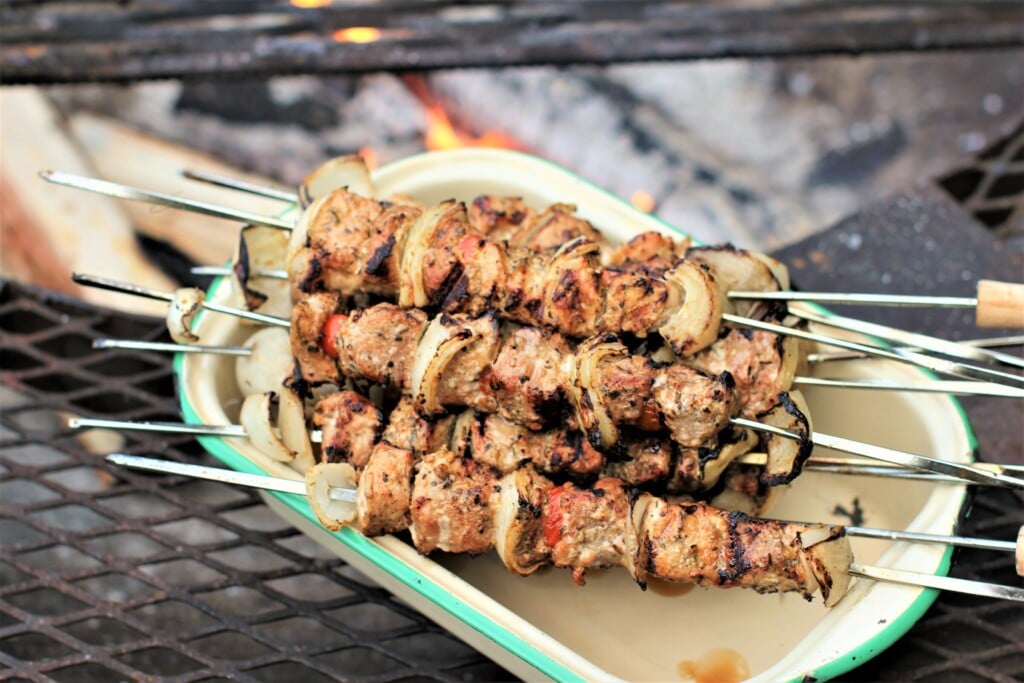 This Souvlaki Marinade is Da Bomb!

All you do is whiz up lots of garlic, lemon, olive oil and spices in a mini chopper, food processor, or blender and you've got a batch of marinade ready to turn any meat or veggie into something just a little more special. There's enough marinade to flavour 3 to 4 pounds of cubed meat, but it's easy to use just a few spoonfuls if you're making smaller amounts. The leftover unused marinade will keep for a couple weeks in the fridge, so you can whip up a batch of Greek roasted potatoes or marinate a couple pork chops for dinner any night.

Toss your choice of meat with enough of the souvlaki marinade to coat it well, then cover the bowl and leave it in the fridge for 2-3 hours, or even up to 24 hours, to let all that amazing flavour soak in.

Now you can grill the meat, or roast it, or thread it onto skewers to make souvlaki kebabs.

Souvlaki Kebabs work well on a grate over glowing coals on a campfire, or on a barbecue grill, or even under the broiler in the oven. 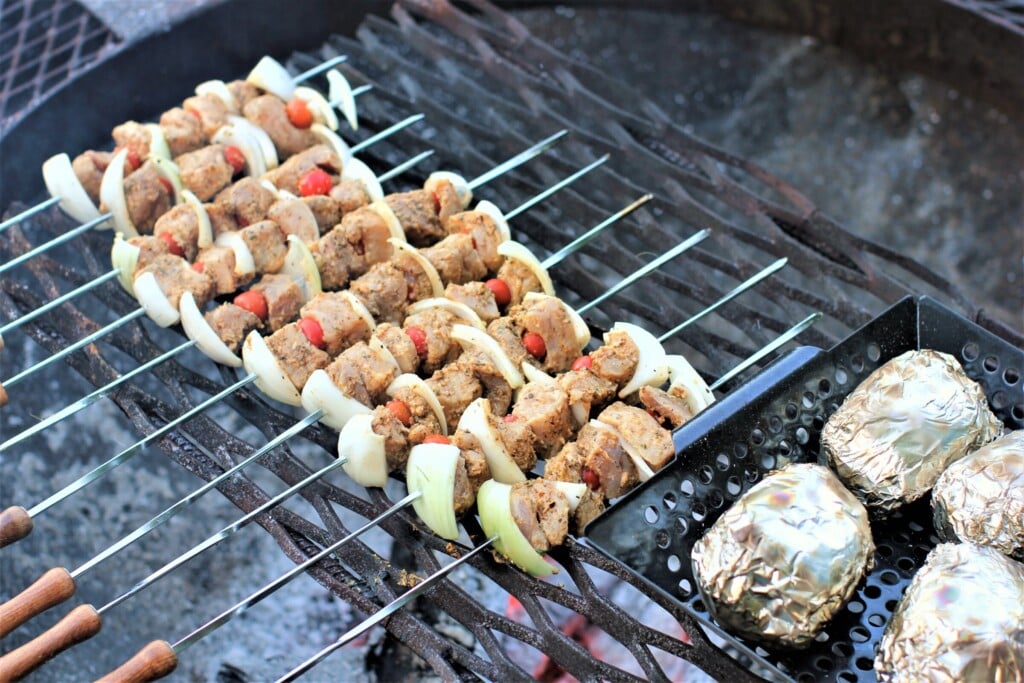 Get Your Grill On!

Cook the meat until the edges are nicely charred and the insides are juicy and tender, infused with the spunky flavours of souvlaki marinade - tangy lemon, oregano, garlic, and olive oil. A Greek fiesta on a stick. 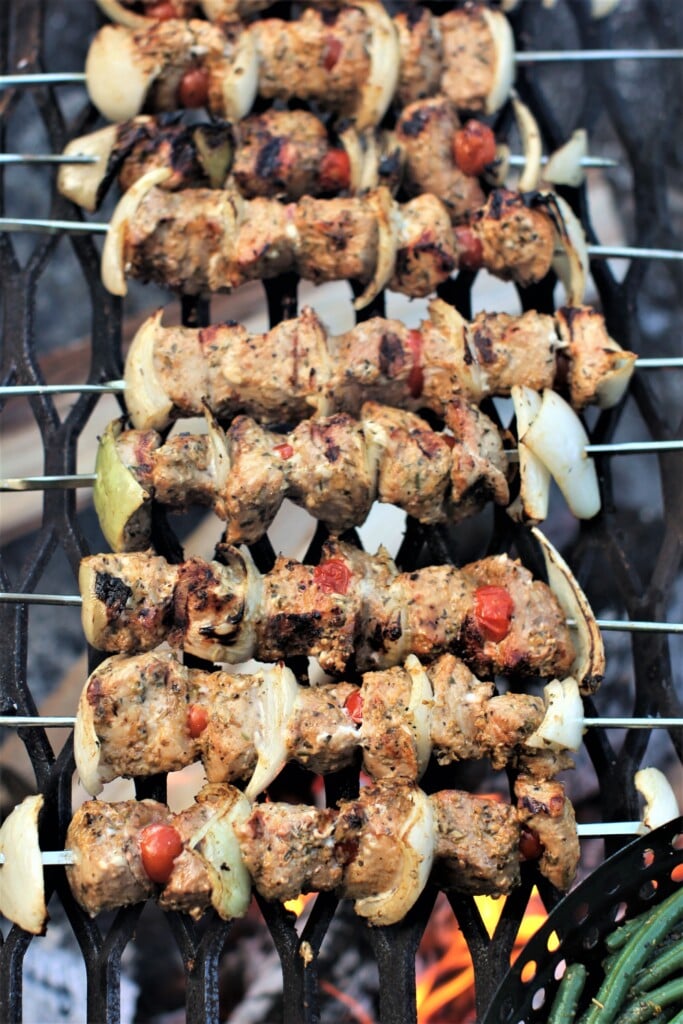 You can pile those tender bits of meat onto a plate and serve them with a zesty Greek tzatziki sauce, load them into pita bread or flatbread, or just devour them off the skewers.

This easy marinade is my go-to whenever we want a fuss-free, but special dinner to grill outdoors. I love having enough left over to use later on during the week. It's great to have the meat marinated and ready to grill when your guests arrive. No last minute preparations!

How Else to Use the Marinade

Souvlaki marinade is great with chicken, turkey, or pork (or any meat, really), and tastes great brushed over fish fillets on the grill or tossed with shrimp for grilling, too. Marinate chicken thighs or pieces and grill them, or marinate pork chops in it.

*Tip - You can freeze any unused marinade, too, or pop the meat and marinade together into a heavy ziptop bag, remove all the air and freeze the meat with the marinade, ready to defrost and grill or roast up any time (pork chops or chicken thighs work really great like that).

This marinade has only a minimal amount of salt in it (so it doesn't draw juices out of the meat as it marinates), so add salt to taste if desired, after the meat is cooked.

Make up a jar of souvlaki marinade and add a touch of Greek to your grilling feasts!

Souvlaki marinade works well on cubed meat for kebabs, but also on chicken pieces or pork chops for grilling, or on ribs, or whatever cuts of meat you would like to infuse with this fresh Greek flavour. Marinate a whole pork loin roast overnight in a heavy ziptop bag with 3 to 4 tablespoons of the marinade and then roast it for a great flavour and moist meat. Brush racks of ribs with the marinade, then put the into a baking dish, cover with foil, and bake on low heat for 3 to 4 hours. Then uncover, brush with more marinade, turn up the heat and roast until browned. Delicious. Also works great to make Greek roasted potatoes. Toss potato cubes with some of the marinade and then roast at high heat (400°F/200°C) until tender. *Leftover marinade can be frozen, or combined with meat (pork chops or chicken thighs are great) and frozen in bags, ready to thaw and cook when needed.
Keyword barbecue, BBQ, Greek food, grilling, kabobs, kebabs, marinade, shish kabobs, shish kebabs, souvlaki, souvlaki marinade
Tried this recipe?Let us know how it was! 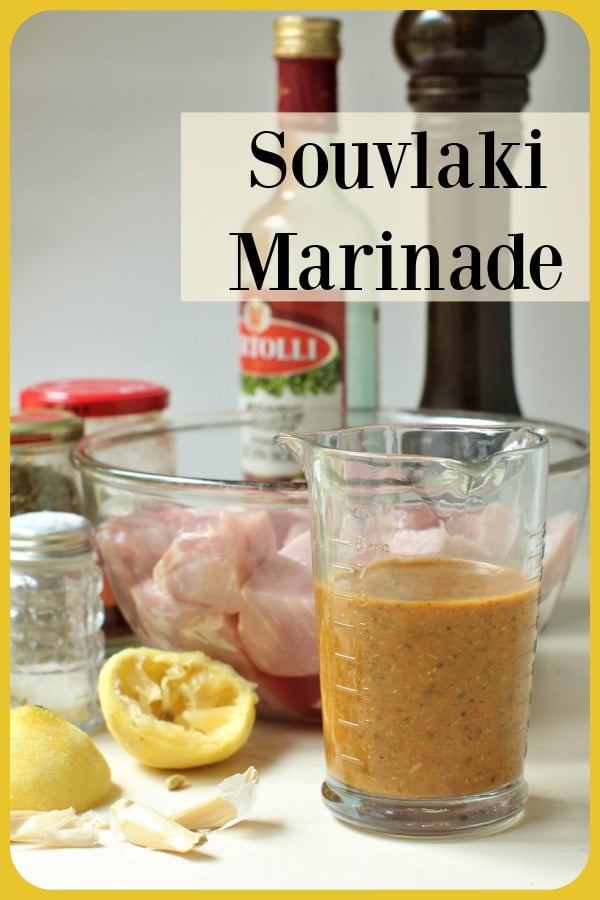 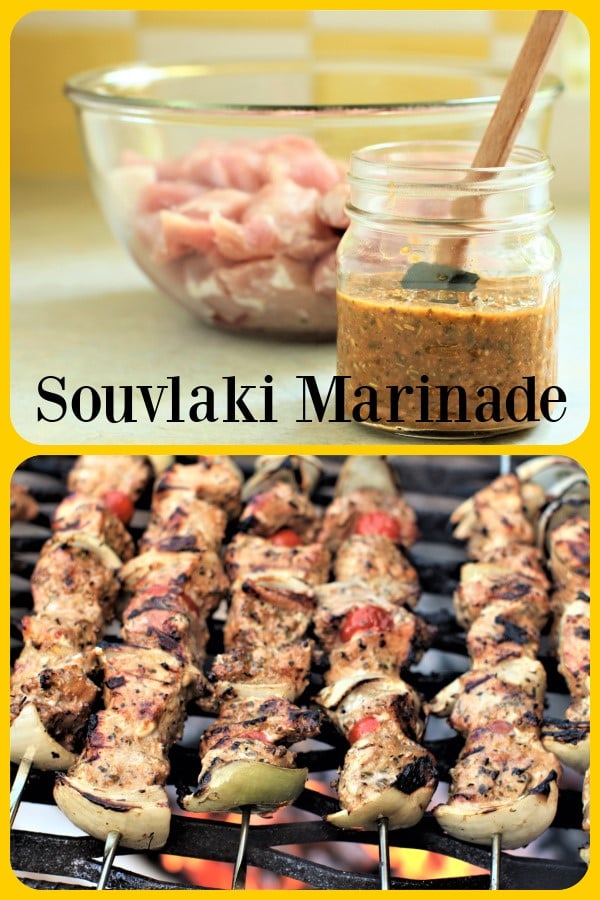