Plum dumplings are an autumn treat! Soft, pillowy potato dough surrounds a whole purple prune plum - so sweet and juicy inside. These German dumplings are rolled in buttery crumbs, then sprinkled liberally with crunchy cinnamon sugar - they're a wonderful light meal, brunch dish, snack, or dessert. 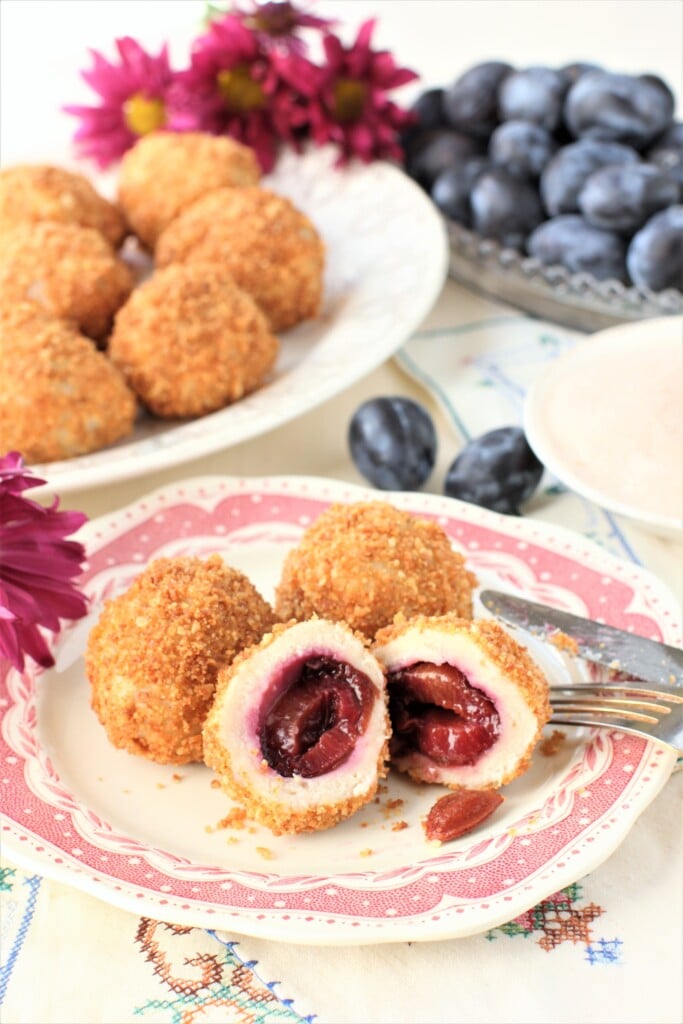 Whenever I see the first prune plums in the stores in late summer, I get all nostalgic with a craving for these delicious dumplings. I've made them once a year ever since before the kids were born, when it was just my husband and me as a young couple, and they've always been a much-awaited fall treat.

'Zwetschgen' is the German name for Italian prune plums - the egg-shaped purple plums with firm greenish flesh that are only available in fall. ('Pflaumen' is the generic German name for all plums, and that's what we tended to call them.) 'Zwetschgen' are beloved by Germans and are a big part of my childhood memories. In one of the places I lived as a young child, we had a plum tree in our yard, and I remember my dad shaking the tree as the rain of purple plums plopped to the ground. We'd eat them until our bellies ached.

My mom would pit the plums and lay them out on big screens in the sun to dry into prunes. She'd freeze some of them fresh and we'd have delicious 'Pflaumenkuchen' (plum streusel cake) all year, as well as 'Pflaumensuppe' (a sweet plum soup served as a meal). The sweet and tangy flavour of these juicy, firm-fleshed plums is wonderful in cooked and baked goods. They hold their shape, and their flavour intensifies to deep, purple deliciousness when baked. To me, this is what plums are. I prefer them any day to the big round watery plum varieties that tend to be sour near their pits. 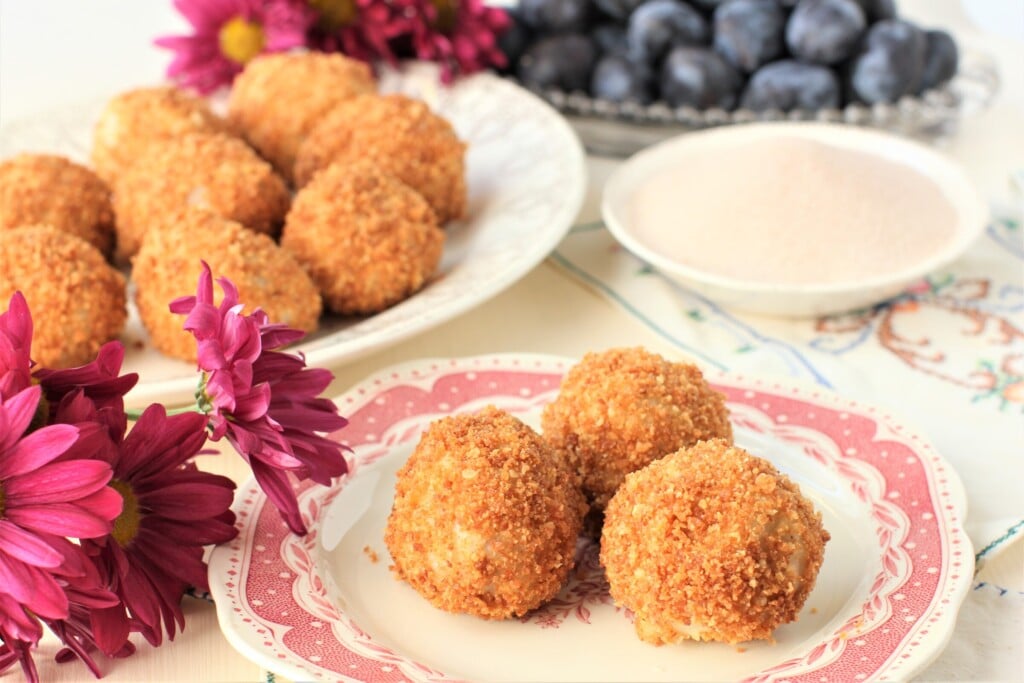 Plum dumplings originated somewhere in Eastern Europe, but they are beloved throughout southern Germany, Austria, and Central Europe as well. They were originally fried but now tend to be boiled and then coated in buttered crumbs, sometimes with ground nuts added. The dumplings can be made with a yeast dough, a quark dough (a kind of German fresh cheese), or a cooked potato dough, like the one we make here. We love the soft fluffy, yet slightly chewy potato dough, as the flavour complements the tangy plums so well.

Plum dumplings are often eaten as a light, sweet meal by themselves, or they can be served after a soup course for a more substantial meal. They are also often served as a dessert or a snack and can be a replacement for cake during the afternoon coffee hour in Germany. When served as a dessert, Plum Dumplings are also pretty delicious served with vanilla sauce, whipped cream, or ice cream.

I grew up sometimes having a sweet dish for a light lunch or supper (like the Pflaumensuppe mentioned above, or a milk-noodle soup with butter and honey, or sweet milk-rice). If that seems odd to you, think of having pancakes or waffles for dinner - a form of sweet dish for a main course, too.

How to make Plum Dumplings

There are a few steps involved, but it's not difficult. You will need to boil some whole potatoes (boiling them in their skins prevents them from absorbing too much water and becoming mushy), so they are still warm when you make the dough. You just peel and mash the hot potatoes, mix them with flour and an egg, and you'll have a nice soft dough.

Roll out the dough thickly, cut it into squares, and plop a whole prune plum onto each square (try to pick out smallish plums, as they'll be easier to cover with the dough).

Wrap the dough up around the plum and pinch it together to completely cover the plum. Roll the dumplings to make them smooth. 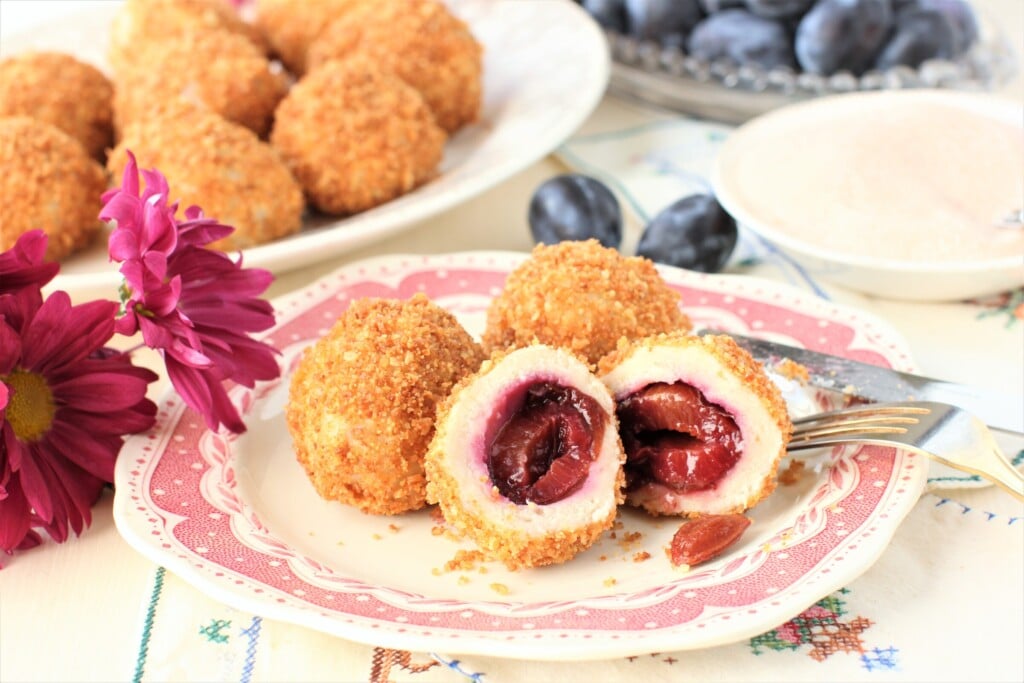 To eat the dumplings, cut them open, remove the prune pit, and sprinkle them liberally with cinnamon sugar.

Oh, my. What heavenly delight is this?

Crispy, buttery crumbs, soft chewy dough, and a burst of juicy, tangy plum hiding inside like a purple jewel. The cinnamon sugar is the crowning crunchy glory to turn the whole dish into a sweet spicy delight. 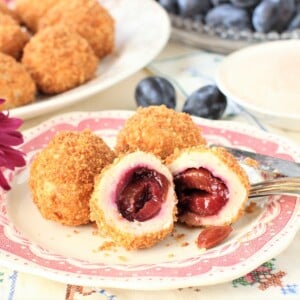 for the fried breadcrumbs:

for the cinnamon sugar:

Fruit Substitutions: Instead of prune plums, you can use Damson plums, small apricots (to make Marillenknödel), large chunks of peeled and cored apples, chunks of banana, or a small handful of blueberries in each dumpling. Plum Dumplings can be frozen. Lay the formed, uncooked dumplings in a single layer without touching on a cookie sheet and freeze until solid. Then put them into a freezer bag or container and freeze them for up to 6 months. Cook them in boiling water from frozen - they will take 5 minutes longer than when not frozen. *You can serve the plum dumplings without the breadcrumb coating - just cover them liberally in melted butter and sprinkle them with cinnamon sugar. Or you can also serve them with vanilla sauce, lightly sweetened whipped cream, or vanilla ice cream (with or without the breadcrumb coating). *Use any leftover cinnamon sugar in other baking, or sprinkle it on hot buttered toast (to make cinnamon toast).
Keyword dumplings, fruit desserts, fruit dumplings, German plum dumplings, Hungarian plum dumplings, knoedel, Pflaumenknoedel, plum dumplings, plums, prune plums, sweet dumplings, Zwetschgenknoedel
Tried this recipe?Let us know how it was! 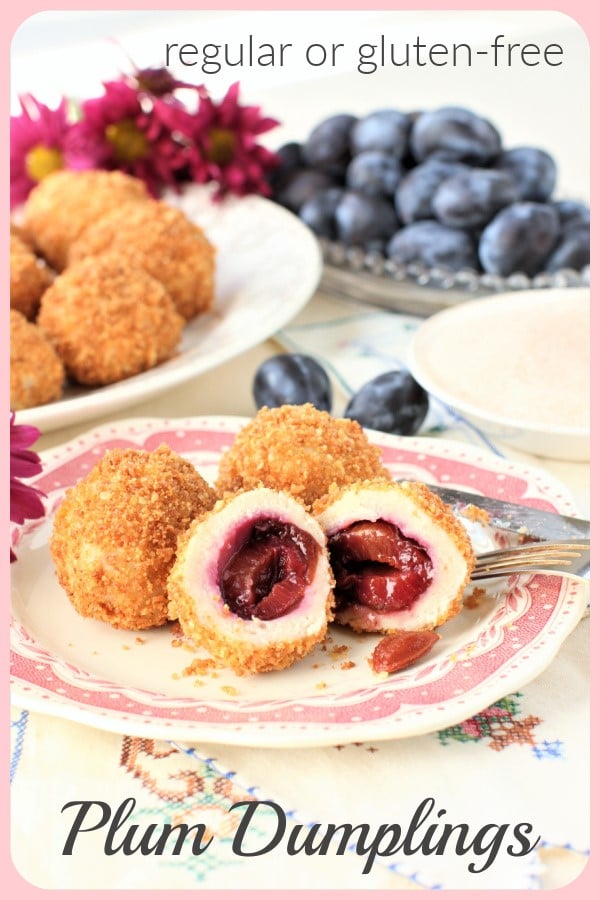 Túrós Csusza (Pasta with Cottage Cheese): A Taste of Hungary