Nutty Monkey Peanut Butter Banana Smoothie - when you need a snack that is filling and to tie you over to the next meal, this peanut butter banana smoothie will do the job! (Skip to recipe.) 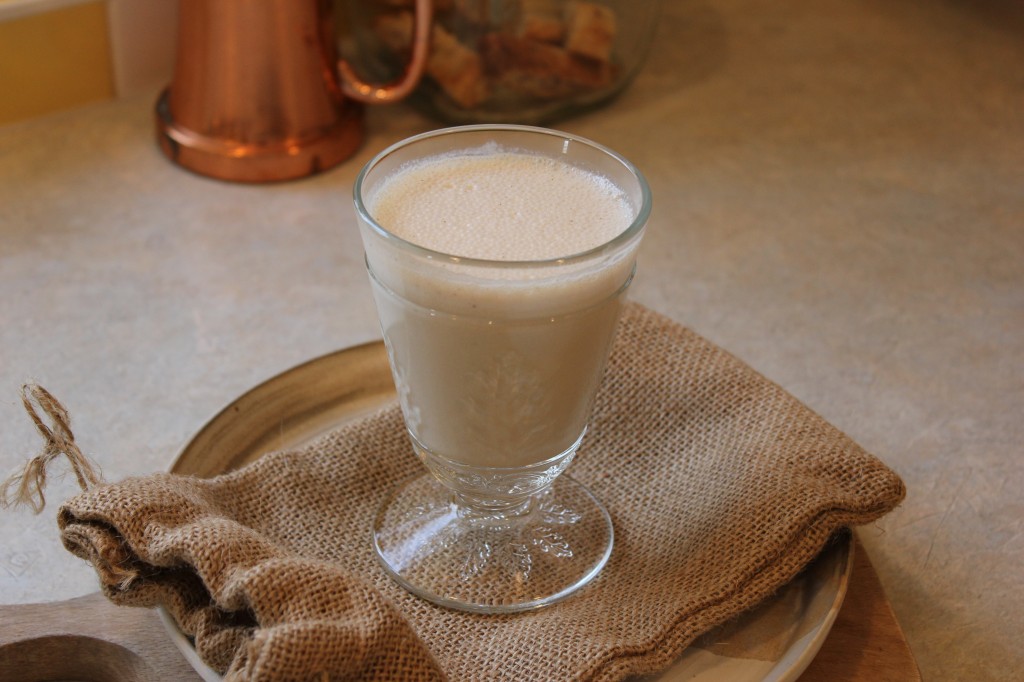 Peanut butter, bananas, maybe even some chocolate, in a thick and creamy shake. This is a favourite around our house, and in the wake of the recent braces, even more popular. It makes a quick and energy-revving breakfast on the go, or a great pick-me-up snack.

The inspiration for it came from a funky little cafe somewhere in a small town (the name of which, I have forgotten) in northern California, where we stopped for a snack on our trip to San Francisco last summer. This shake was discovered because we had a very hungry and grouchy teenager (the aforesaid metal-mouthed one) who did not want to stop for just a snack - he wanted a meal, something that involved meat or protein or stick-to-your-ribness, not a mere snack.

Well, this little place, with its murals all over the walls, served mostly shakes and smoothies - healthy ones at that - and besides, we were stopping in a few hours for a real meal, so a snack was all we needed. So for the boy,who was sulking and said "fine, then I don't want anything", I ordered the most filling smoothie on the list - something involving peanut butter and protein powder. Ugh. It didn't sound refreshing (but it did sound hefty). I was craving a light and fruity Mango Tango-something-or-other. Something to cool me on this sweltering hot August day. 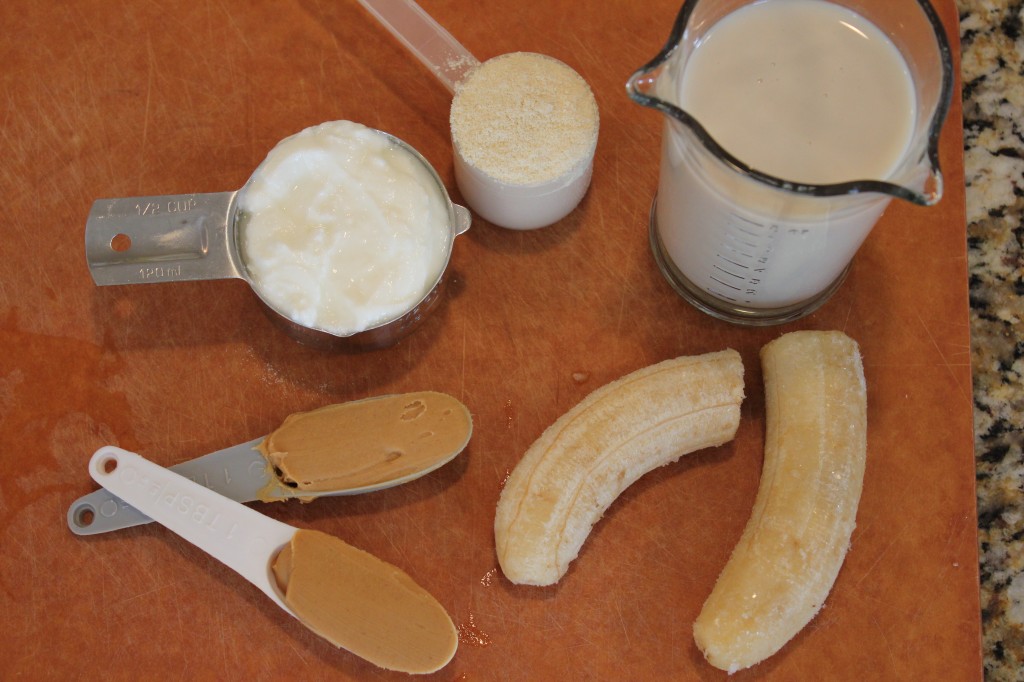 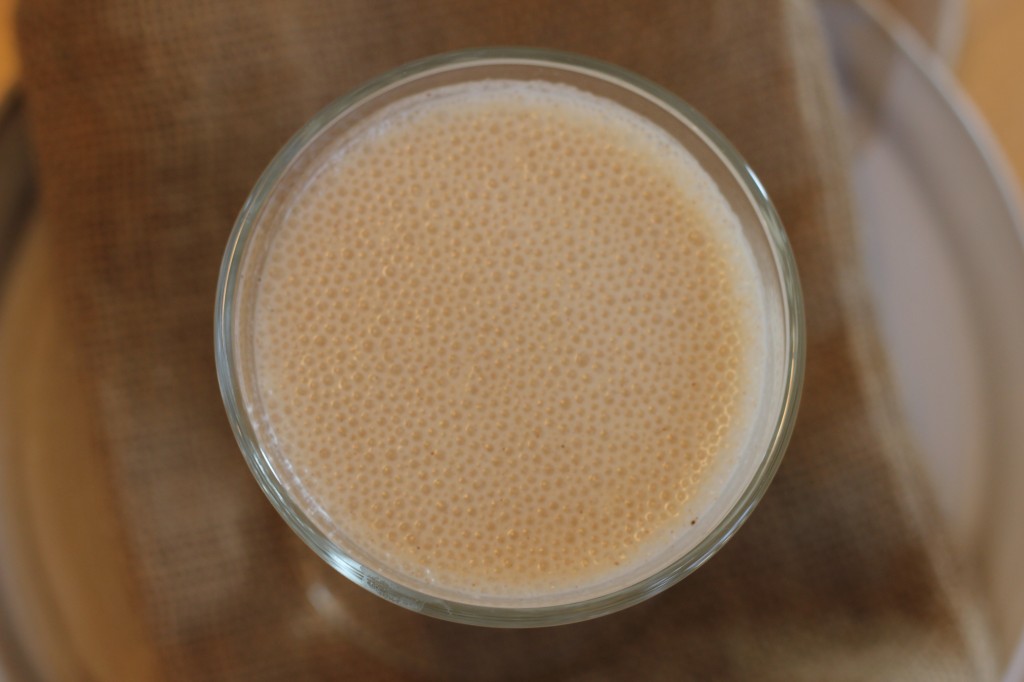 The boy looked at his thick ivory-coloured drink suspiciously, turned up his nose, and took a teeny tiny sip (hunger winning over pride).

"How is it?" I asked. "Not bad," he answered, rolling his eyes for added nonchalant effect. He took another big slurp.

We practically had to pry it out of his hands to have a taste. "Not bad?" I said. "Wow, that is amazing."

And it really was. We all fought him for more tastes. And that grumpy, hungry boy had a big smile on his face and a full stomach to show for his empty cup.

Well, he was able to hold out until our meal stop.

Once we got home, he begged me to try to recreate the same smoothie. After a few attempts, this version got the thumbs-up, and is now made often in our house.

Kitchen Frau note: I like to buy lots of bananas and let them ripen to that perfect state of yellow, freckled with brown, when they are oh-so-sweet but still firm, peel them, break them in half, lay them on a parchment-lined cookie sheet, freeze them 'til firm, then pop them into a large ziplocked freezer bag and keep them frozen for whenever the PBB-Shake urge strikes.

We sometimes make a chocolate version by adding about a tablespoon of cocoa powder (the unsweetened baking kind) and it is a difficult decision to say which one we like better.

Add more ice cubes if you'd like a lighter shake. 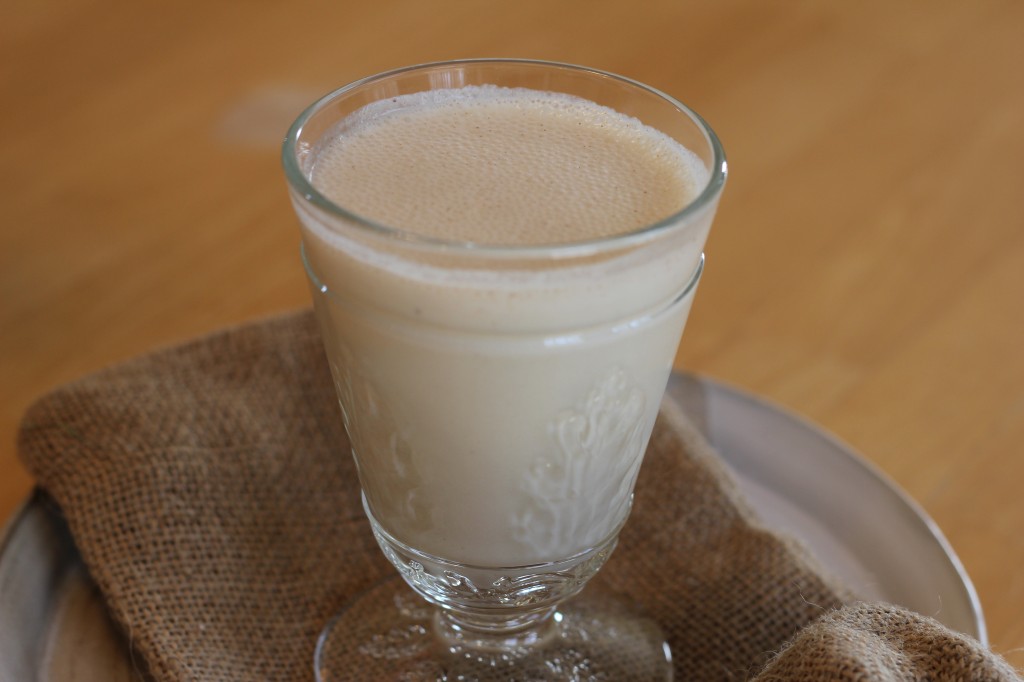 Blend all together in a blender until frothy.