Whip up Gingerbread Dough Boy smoothies for a delicious, satisfying breakfast in a glass - full of the goodness of oats, nut milk, and the sweetness of dates and spices. (Skip to recipe.) 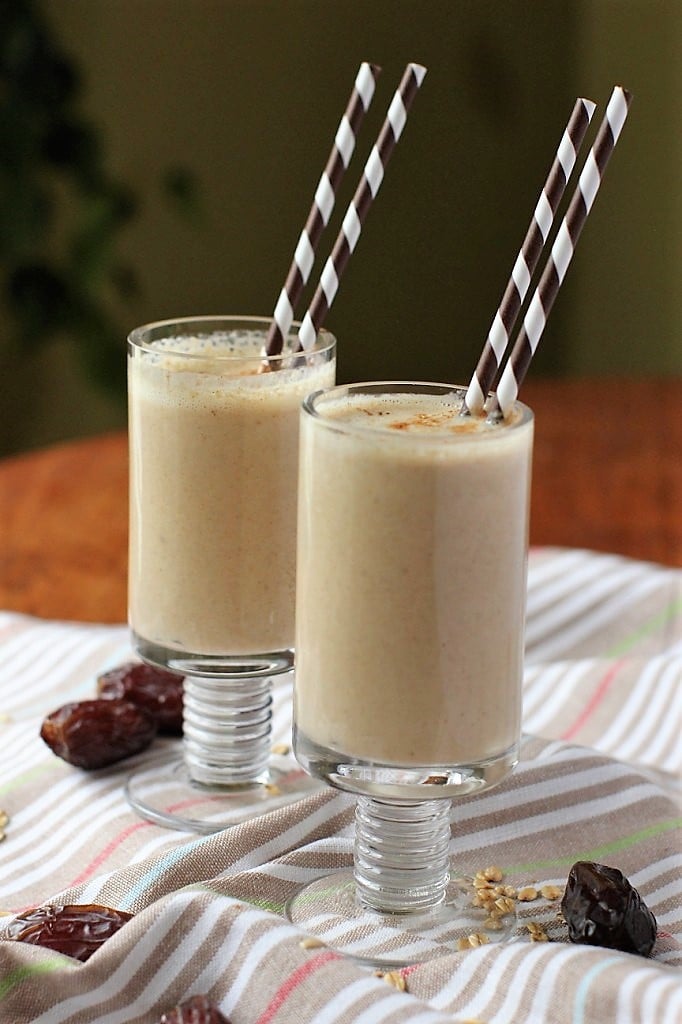 It's like a big glass of drinkable oatmeal and gingerbread cookie dough combined - much too yummy to be a healthy breakfast-on-the-go, right?

We make a lot of smoothies around here - thank goodness for my powerful high-speed blender. I use it almost daily and it definitely earns its keep. I often say that if I put a hunk of wood in there, the blender would chew it up to make sawdust in no time. 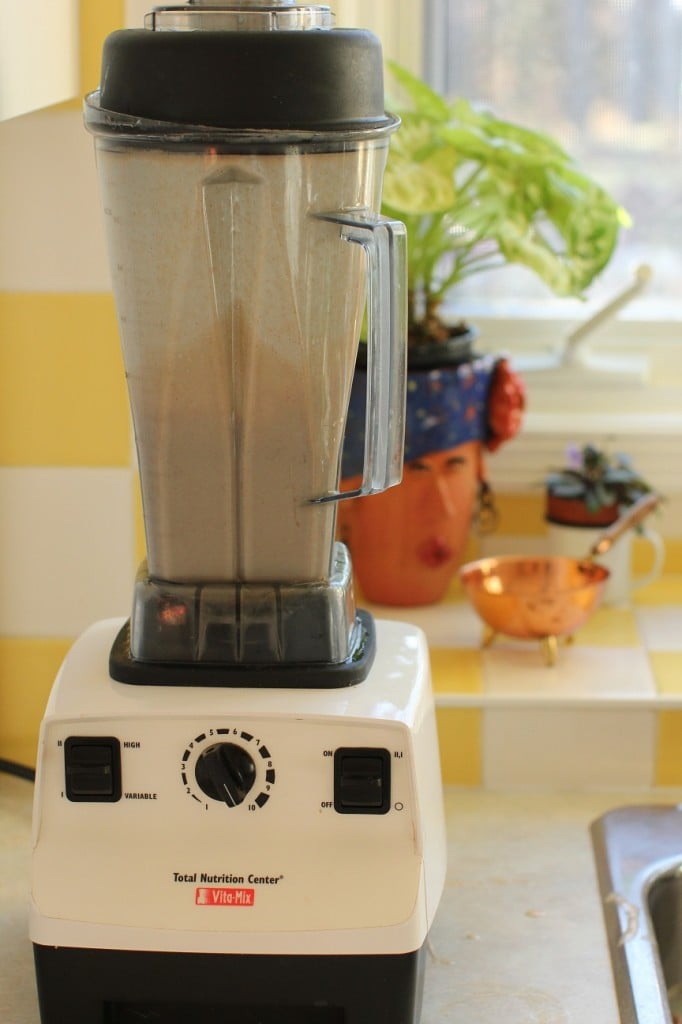 I use an actual recipe for a few special smoothies, like this refreshing Cantaloupe Creamsicle Smoothie, or this teenager-favourite Nutty Monkey Smoothie, and the Gingerbread Dough Boy smoothie in this post, but my regular, everyday smoothies don't usually follow a recipe.

I start with a handful of seeds or nuts, or a dollop of yogurt, a few chunks of frozen banana, then toss in a bunch of this frozen fruit and a little bit of that. I might have frozen saskatoons or raspberries, maybe some chunks of frozen melon or pineapple or mango. If there's any fruit in the fruit bowl that's looking a little tired - in it goes - an apple or a plum or a peach. Sometimes I add a handful of kale leaves, spinach, or a celery stalk - maybe some basil or mint or parsley, or a glop of flax seed oil or coconut oil. It often gets a squeeze of lemon, or a few tablespoons of frozen orange juice concentrate, maybe a shot of vanilla or a drizzle of honey. Then I slosh in enough liquid to get the whole mass blending - either coconut water, fruit juice, or a plant milk. 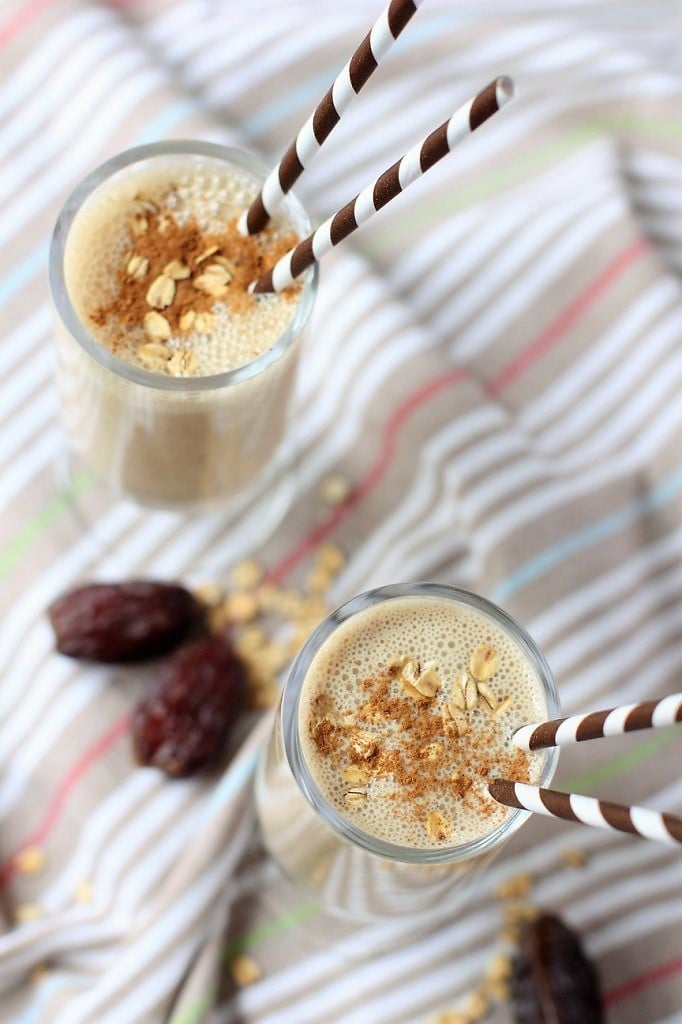 By this time the blender is usually so full it's almost oozing out the top! It'll give us a few big mugfuls of smoothie for breakfast, and there's enough left over to fill a couple small mason jars to refrigerate for the next day. They're as good as freshly made - they just need a quick shake-up first. Though I do admit that with this casual system, some smoothies turn out better than others. You never get the same flavour twice.

Sometimes (and I'm not mentioning names here) family members even roll their eyes at my combinations (What? They don't like the strawberry jam, kale, and hemp heart smoothie?) but mostly the smoothies are happily guzzled with no complaints. 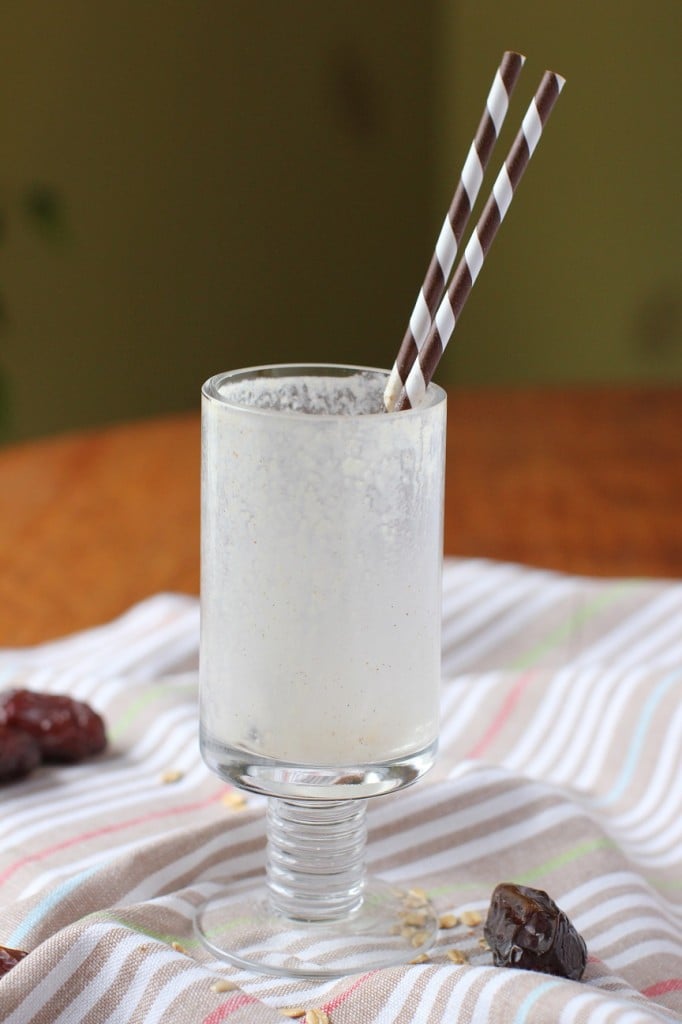 I think the most unusual thing I've thrown into the blender was the leftover half a pan full of rhubarb and plum crisp. The dessert wasn't getting eaten, and I couldn't bear to see it go to waste . . . so . . . into the blender it went with a few cups of milk. The cinnamon and crunchy oat crumble topping whizzed up into a doughy, silky smoothie with a fruity rhubarb tang. It ended up being a hit!

It got me thinking how good oats might be in a smoothie - there had been a heft to that made-from-leftover-fruit-crisp mixture that was very satisfying. And since gingerbread cookie dough is so popular with my crew, this smoothie was born. 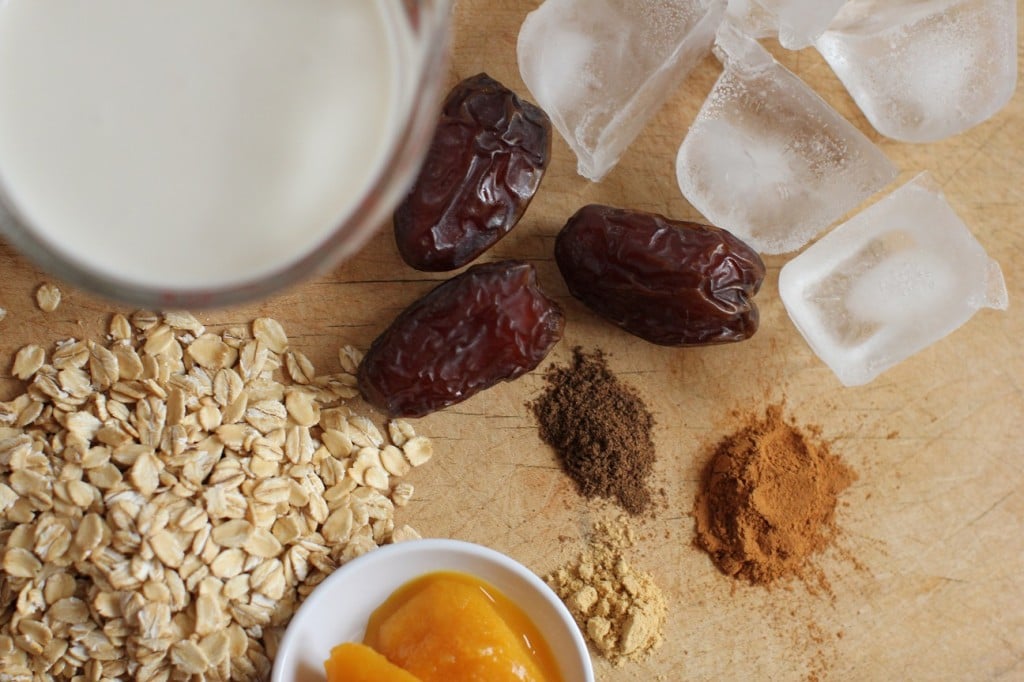 If you love gingerbread, or pumpkin pie, or gingersnap cookies - you've come to the right place. These Gingerbread Dough Boy smoothies tastes like dessert for breakfast, but have the stick-to-your-ribness of a bowl of oatmeal porridge. Oats contain high amounts of insoluble fiber and minerals and can lower high blood sugars and help reduce the risk of heart attacks. As little as a half teaspoon of cinnamon per day has all kinds of health benefits. The dates add a refined-sugar-free, caramel sweetness to the smoothie.

And if you're in a rush getting yourself up and out the door to work in the morning, you can measure all the ingredients, except for the ice cubes, into the blender the night before. Store the whole blender container in the fridge overnight to let the oatmeal and milk get nice and cozy together, and in the morning just add the ice cubes (your eyes barely need to be open for that) and whiz it up. Pop it into a to-go cup, and you can race out the door with breakfast in hand. 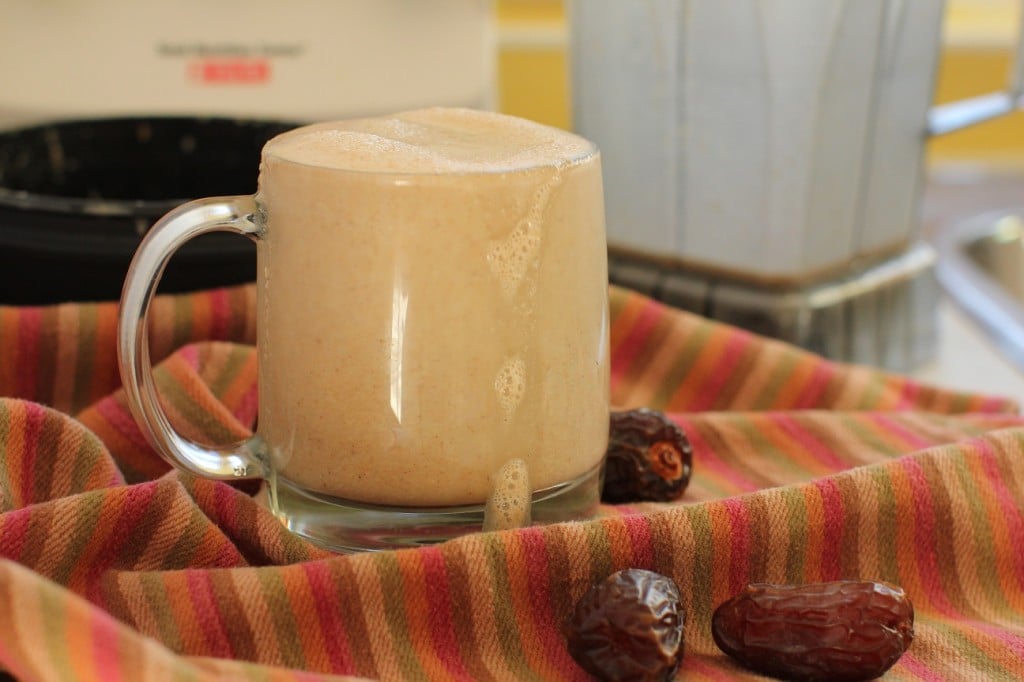 Kitchen Frau Notes: I like to keep a can of unsweetened frozen orange juice concentrate in my freezer. Whenever I need a shot of pure tangy orange flavour to liven up a recipe, I just scoop out a few spoonfuls, then put the lid back on, cover it with a baggie, and pop it back into the freezer. The orange juice concentrate adds a hint of tang which livens up the spices and sweetness of the dates, though if you don't have any on hand, the smoothie is good without it, too.

*A 'pinch' of salt is the amount you can pick up between your index finger and thumb - less than ⅛ of a teaspoon. It's not much, but it does brighten up the flavours of the spices. 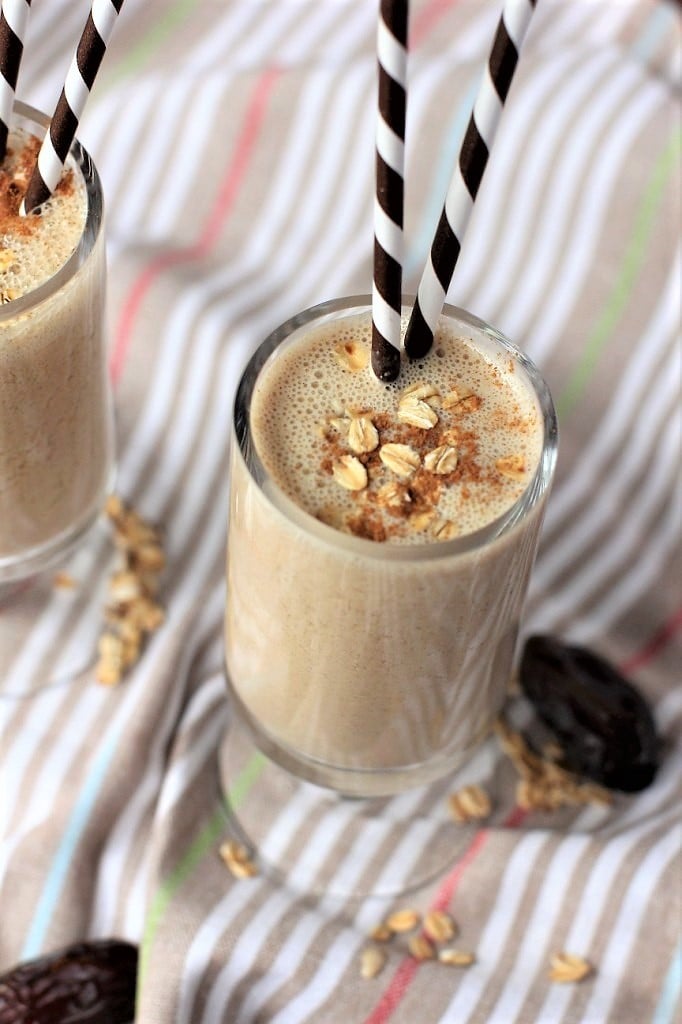 Remove the stem caps and pits from the dates. Just pull the dates apart with your fingers to get the pits out.

Place the pitted dates and all the rest of the ingredients into the blender canister. Whiz at high speed until creamy smooth - 1 to 1½ minutes in a high speed blender, possibly longer in a regular blender. (If you can't get it as smooth as you like in a regular blender, soaking the ingredients overnight as mentioned above, should solve that problem.)

Pour into glasses and sprinkle with cinnamon, oats, or cookie crumbles if you want to be fancy.

The smoothie may thicken up slightly after sitting for a while. Add a splash more milk to thin it, if you like.

Makes about 2 cups (500ml) - enough for one generous breakfast smoothie or 2 snack-sized smoothies.

A Trio of Warm Milks to Curl Up With