Luscious, silky, maple-infused custard topped with a crackling layer of caramelized sugar, Maple Crème Brûlée is the stuff dreams are made of. (Skip to recipe) 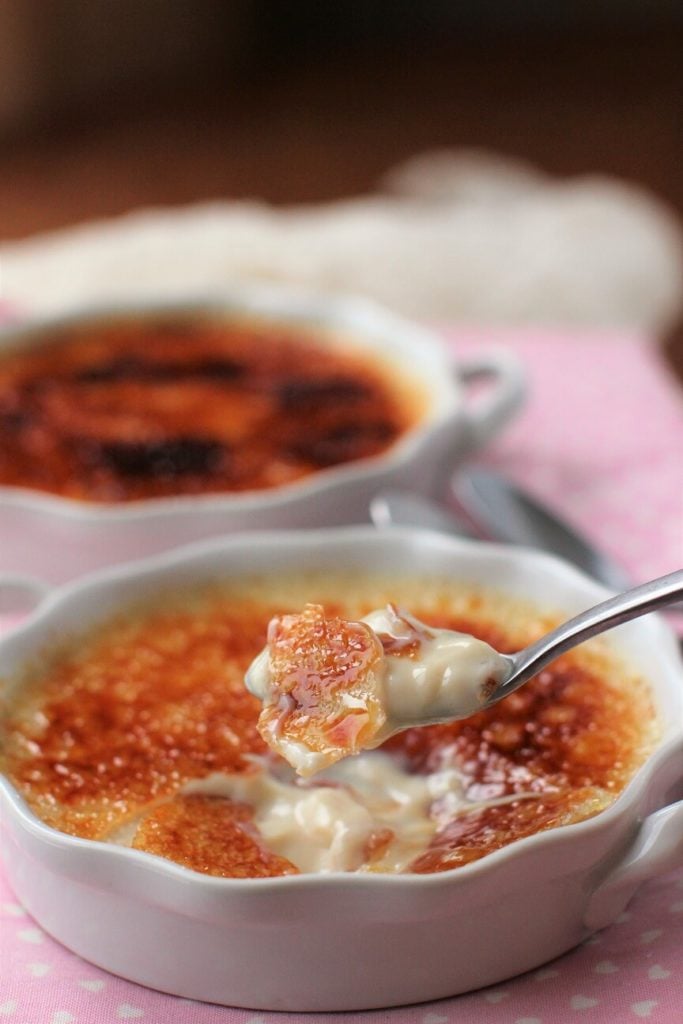 The last part of our little Canadian holiday took us to Québec City. See Part One and Part Two of our trip for more photos, recipes, and stories.

Québec City (usually just called Québec) is a cultural gem; the last remaining fortified city with intact walls north of Mexico. Strolling the streets of its old town, Vieux-Québec, you would think yourself in the center of any small village in France. Winding cobbled streets and old stone buildings transport you instantly back in time. You expect the baker to be walking down the street with a cloth-covered basket of baguettes and the village children to run by you on their way home from school. 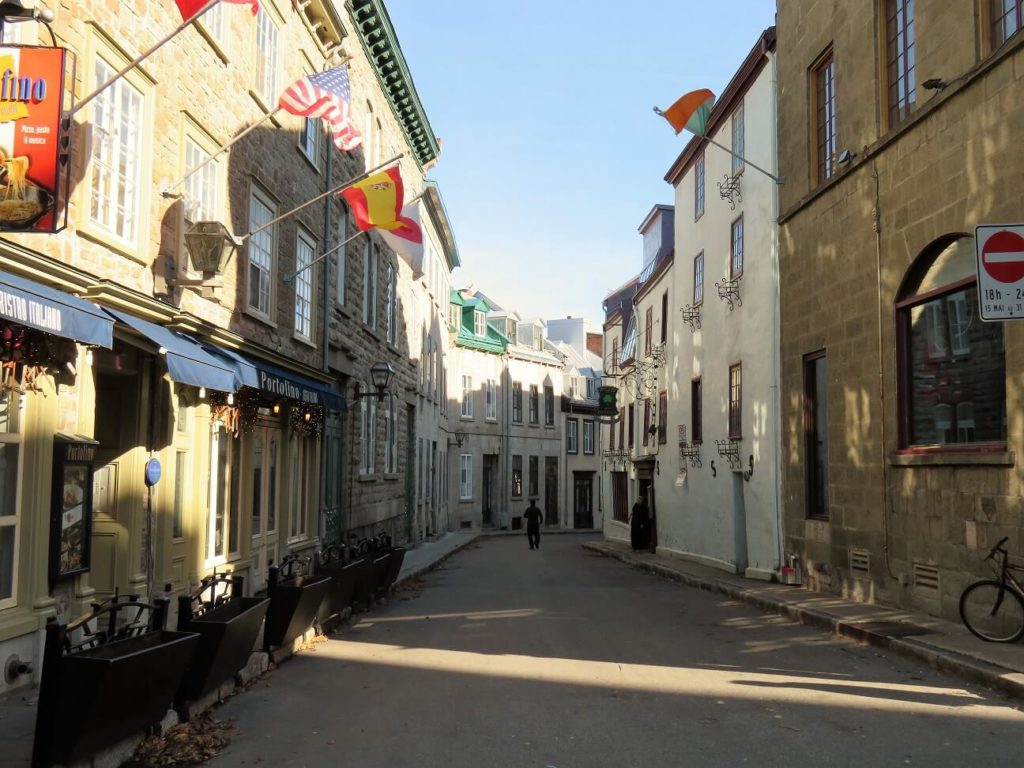 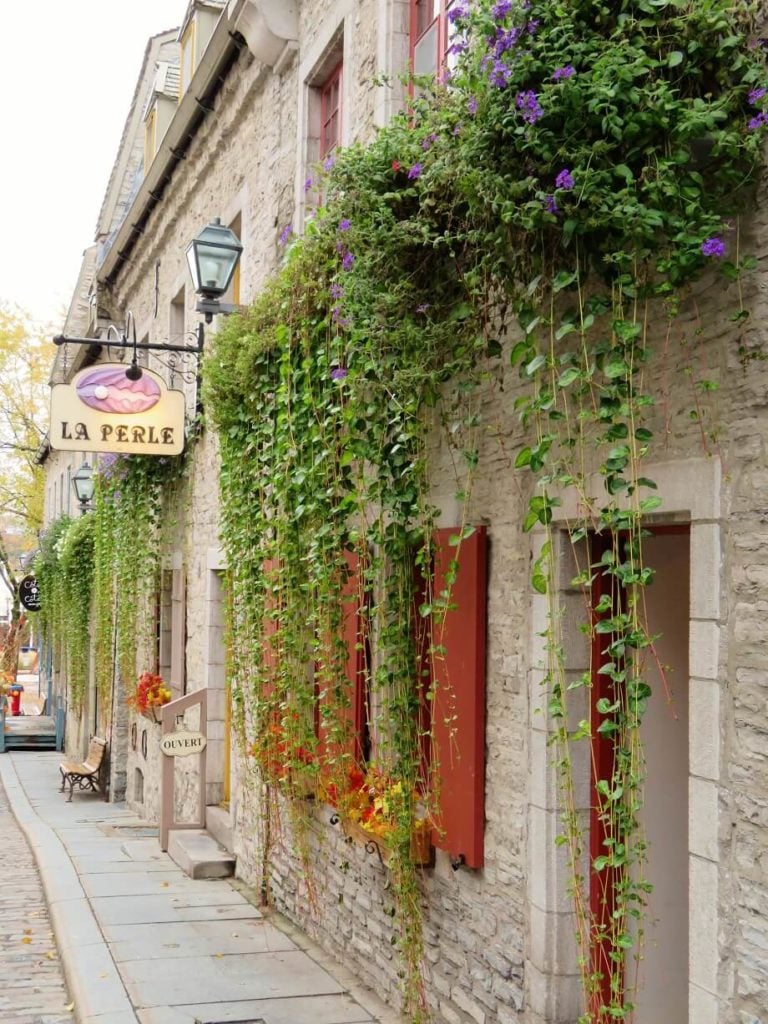 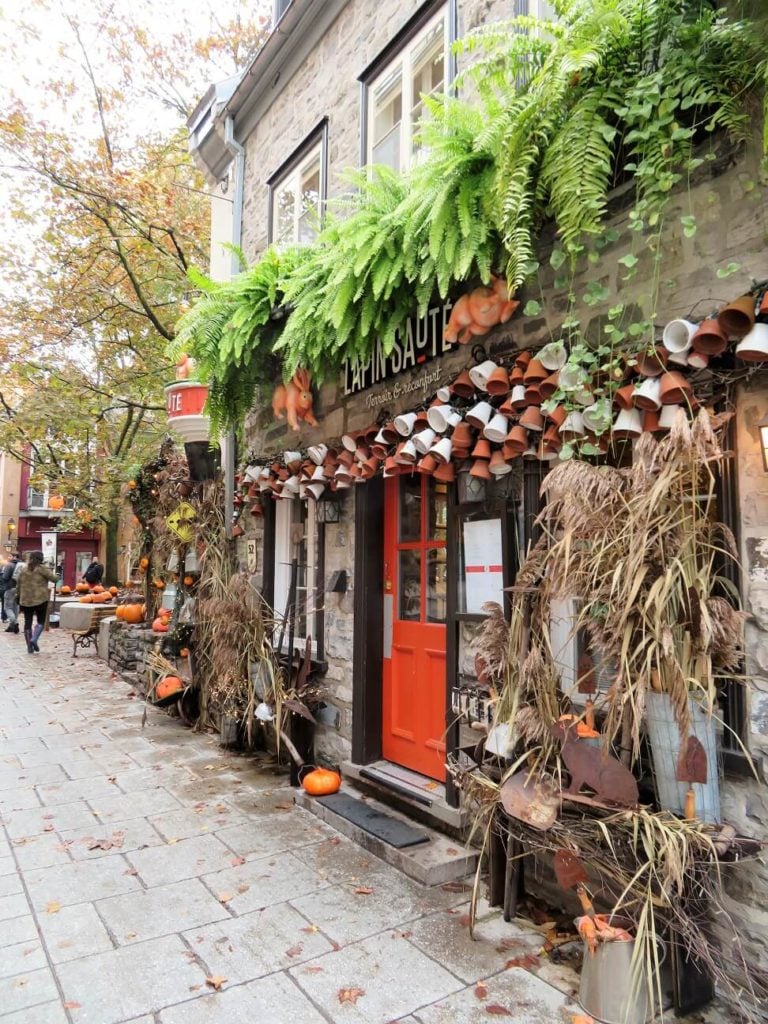 Since it was late October, the city was all dressed up for fall. 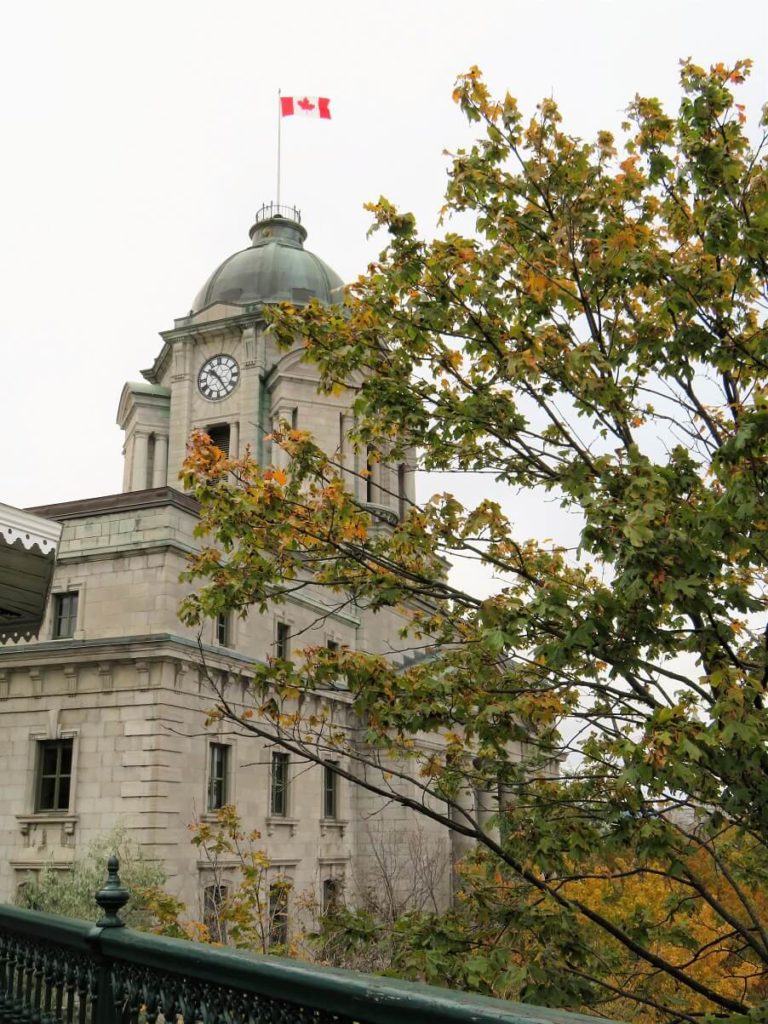 We took a walking food tour to get a little bit of the taste of Quebec - everything from Cariboo liqueur and apple cider to poutine and all things maple.

You can walk along parts of the city wall.

We took a tour of the Citadelle, part of the city's fortifications and the beautifully-kept base of the Royal 22e Régiment of the Canadian Armed Forces, as well as one of the official homes of Canada's monarch and its governor general. 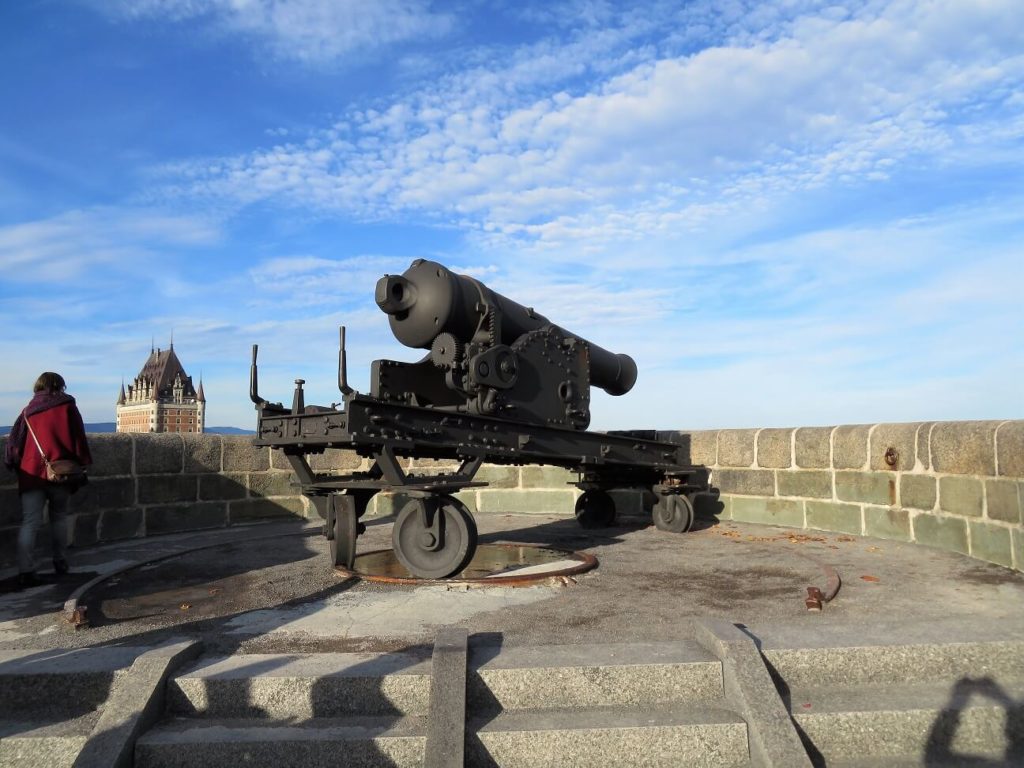 We walked through the market down at the harbour along the St. Lawrence River. Our eyes feasted on a vast array of meats, cheeses, and local fresh produce.

Apples were king at this time of year. 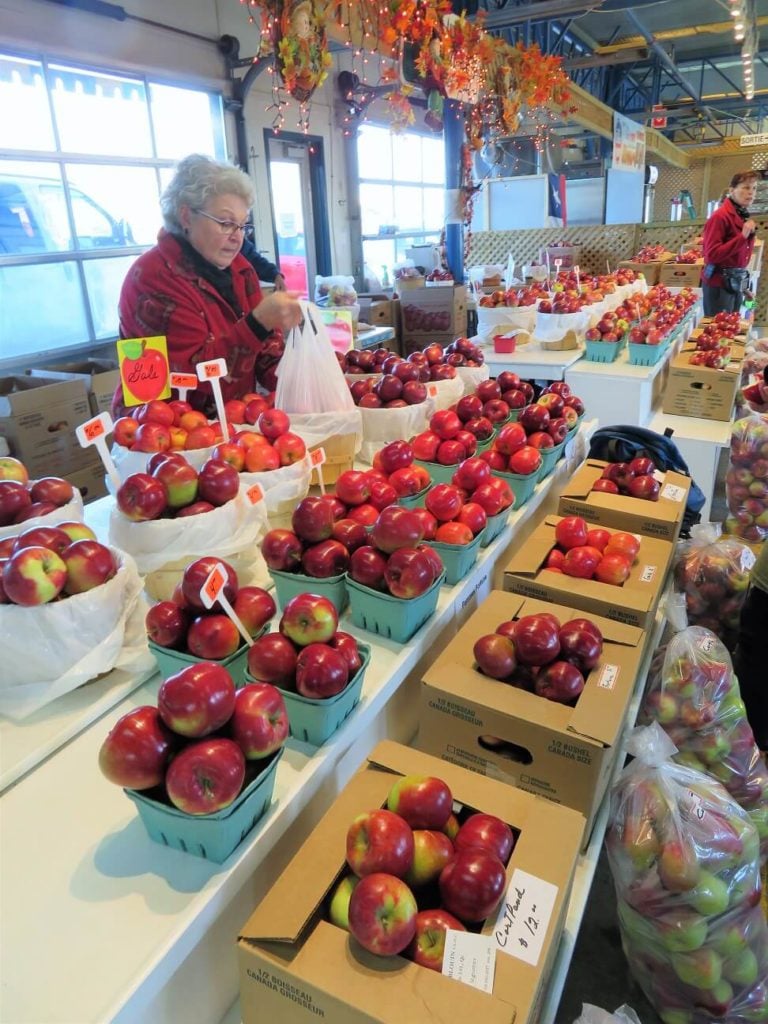 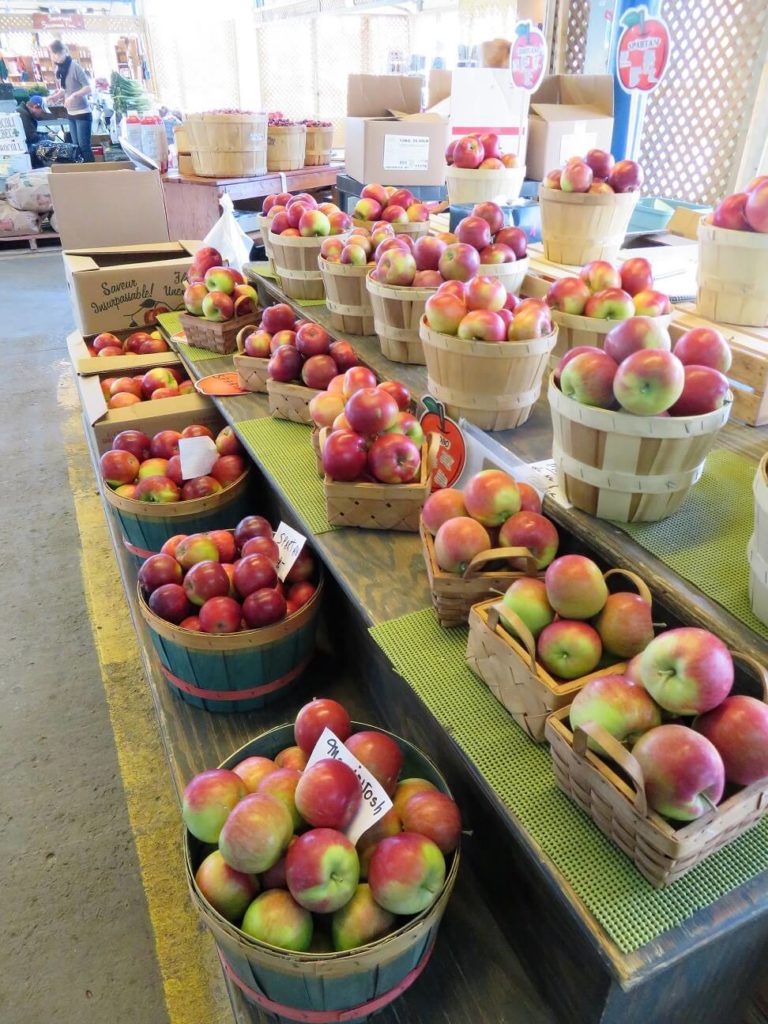 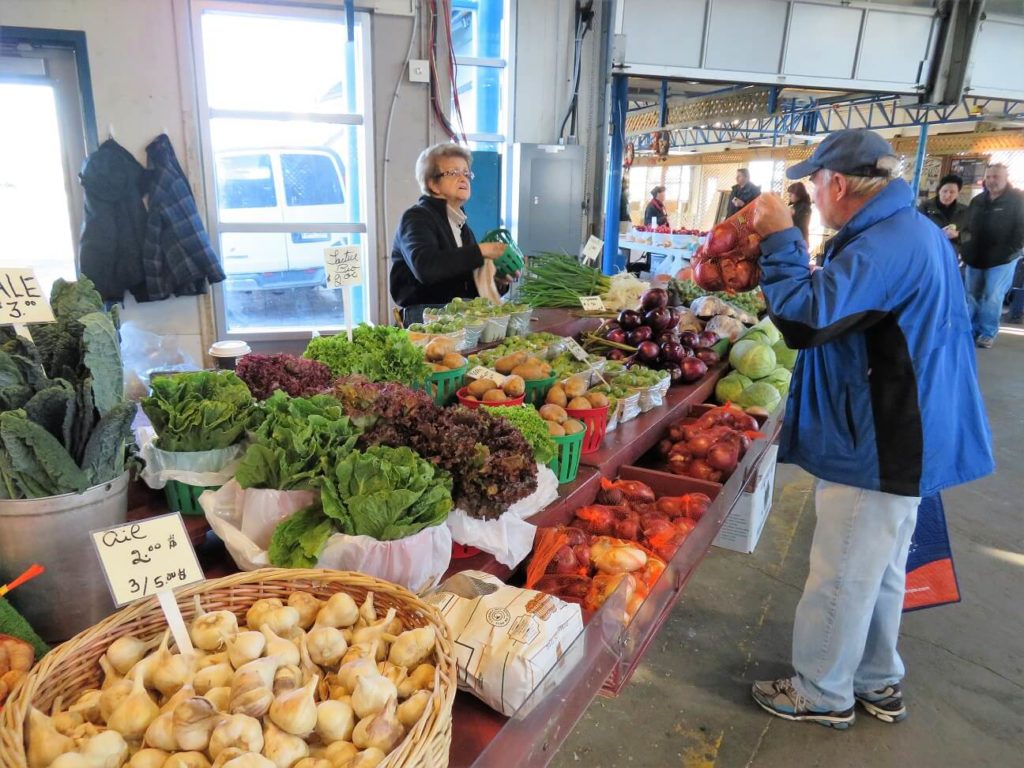 On our last day in Québec, we ate dinner at a restaurant inside the oldest house in Québec City.

Inside the dark, low-ceilinged wood-paneled building we feasted on a meal of tourtière, the traditional Québec meat pie, along with a sweet 'n zesty homemade tomato and fruit ketchup. 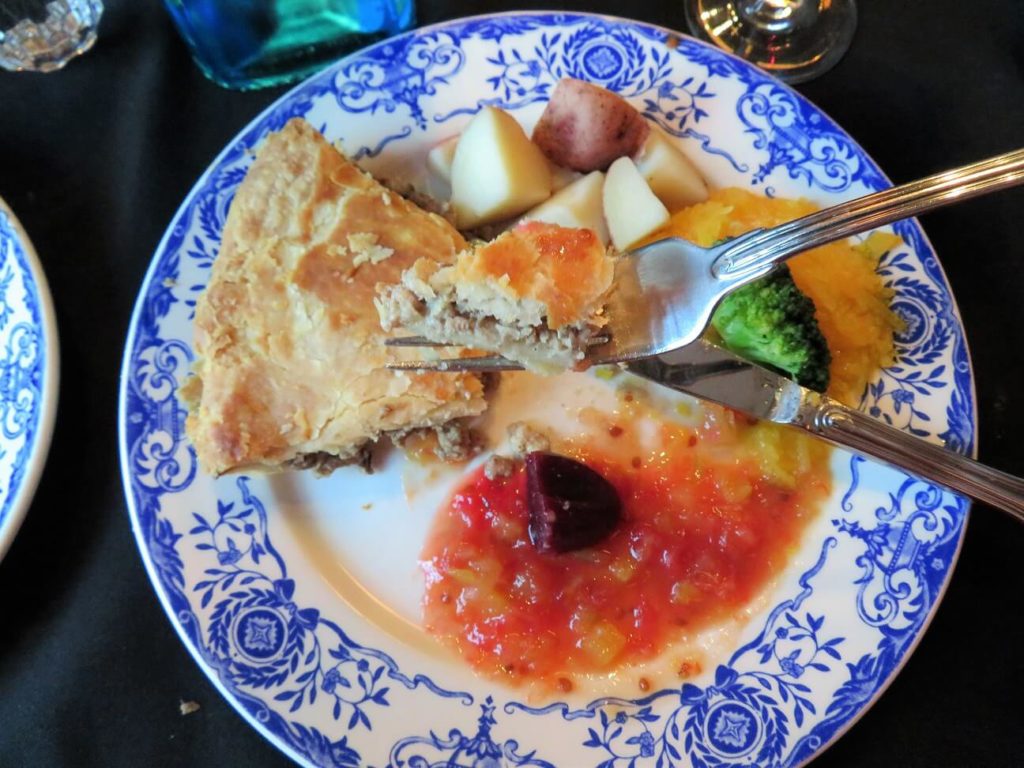 Raymond chose the meat pie made with a selection of wild meats, including cariboo, moose, and wild boar. I lucked out in choosing the most decadent and delicious maple crème brûlée. 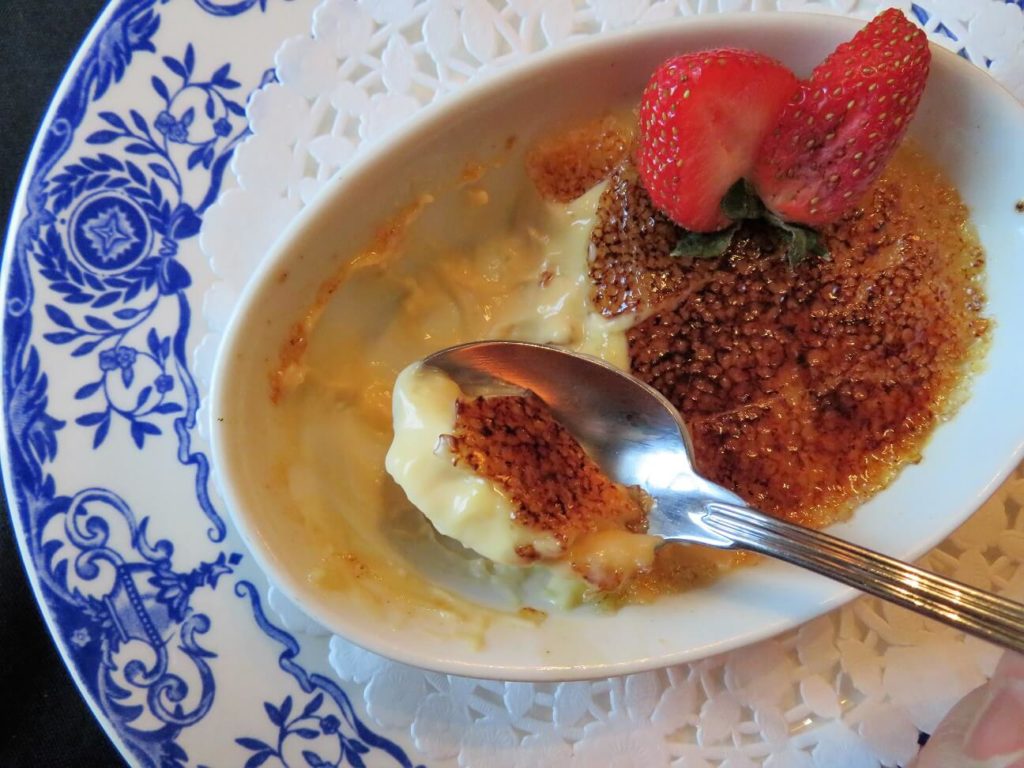 Mmmm . . . heaven on a spoon. That luscious, silky custard infused with the sweet taste of maple topped with a crackly crunchy crust had me smacking my lips long after the last spoonful was scraped out of the bowl. I love cracking that gleaming layer of brown candied sugar with my spoon - kind of like stomping on frozen puddles when I was a kid.

I just had to make it myself as soon as I got home. 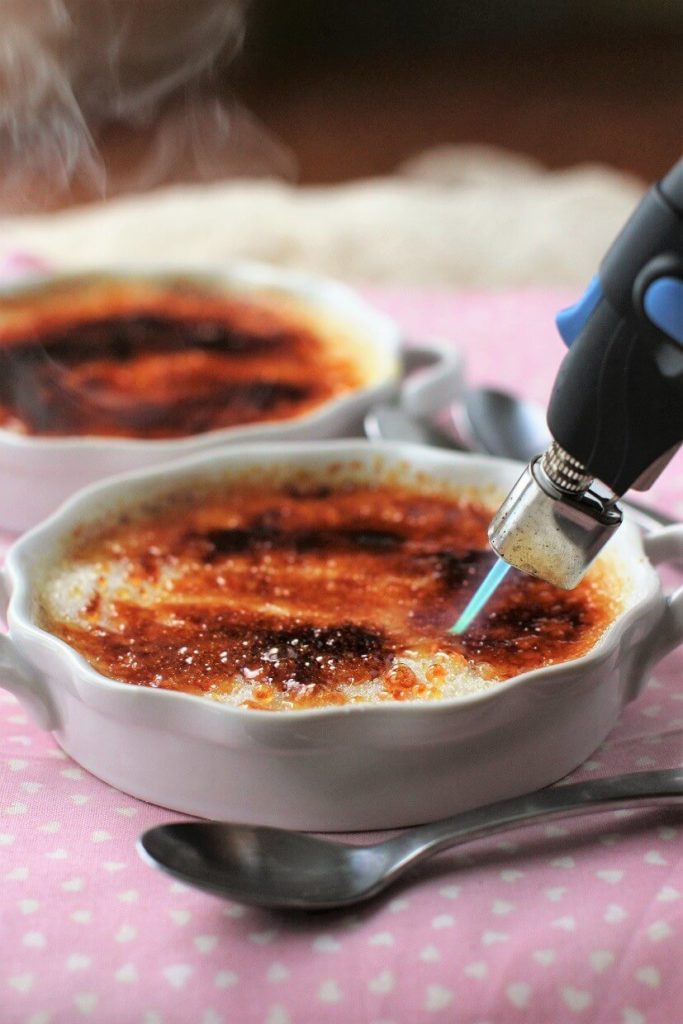 On our way to Toronto for the Taste Canada Awards, we took back roads so we could scope out as many covered bridges as we could find. This took us through some beautiful countryside in the southern part of Quebec - a memorable side trip.

Kitchen Frau Notes: I recommend using the darkest maple syrup you can buy. The darker the colour the more intense the flavour, and since you don't want the custard to be too sweet, you want the most maple flavour you can get with using the least amount of syrup. If you can only get light maple syrup, increase the amount to ⅓ cup (80ml).

Traditional maple creme brulee is made with all cream, but I've lightened it up a bit with milk, without sacrificing the luscious richness of the custard.

Some recipes say you can brulee the sugar under the broiler, but I haven't had much luck with that. If you want to serve creme brulee more often (and you should!), invest in a small torch (I bought mine at a hardware store) or borrow the propane torch from your garage workbench or toolshed. 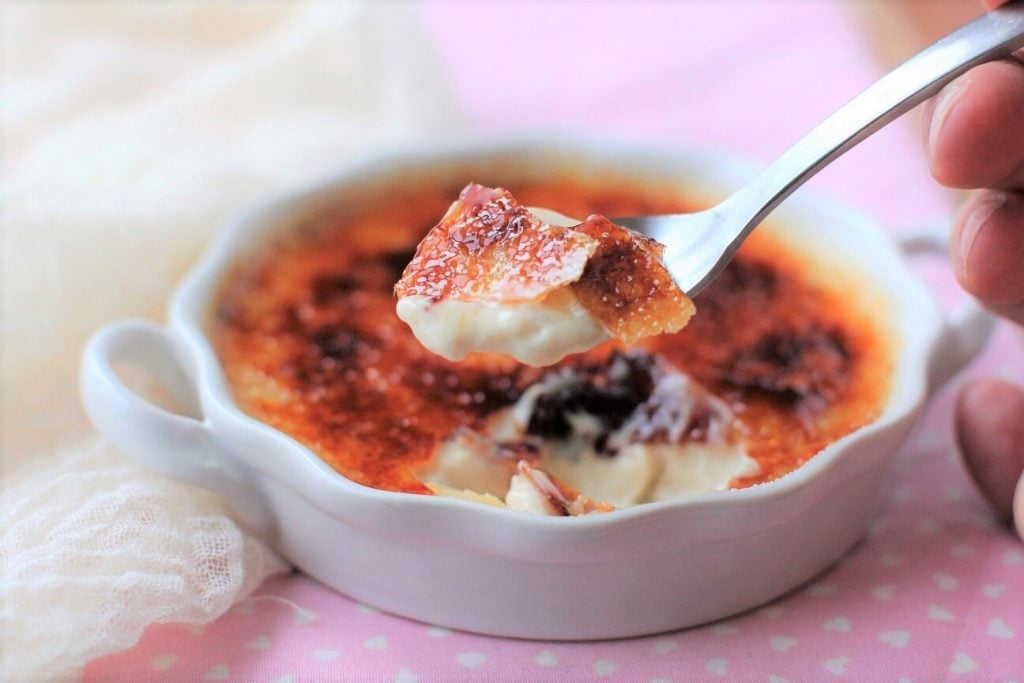 Set a medium-sized bowl onto a tea towel on the counter so it doesn't slip around. Crack the egg yolks into the bowl (save the egg whites for another purpose) and whisk them until smooth.

Combine the cream, milk, maple syrup, vanilla, and salt in a saucepan. Heat over medium heat until it just starts to simmer.

Remove from the heat. With one hand whisking the egg yolks, use your other hand to slowly pour the hot cream from the saucepan in a thin steady stream into the yolks, whisking constantly all the while.

Pour the hot custard cream into the six ramekins in the baking dish, dividing it evenly. Put the baking dishes containing the ramekins onto the middle rack of the oven. Slide the oven rack out just a few inches, enough to reach in and carefully pour the water you boiled earlier into the baking pan around the ramekins until it is three quarters of the way up the sides, trying not to splash any into the custards. Very carefully and slowly, push the oven rack back in.

Bake for 25 minutes, until the custards are softly set, but still jiggly in the center.

Remove the baking pans carefully from the oven, set them onto trivets or towels on the counter, and leave the custards to cool in the water for 30 minutes. Then remove the ramekins from the water and put them in the refrigerator to chill and set completely, 8 to 24 hours.

Sprinkle 1 tablespoon of granulated sugar evenly over each custard - use only 2 teaspoons of sugar for each if your dishes are taller with a smaller surface area.

Using a culinary torch (or larger workbench torch), carefully flame the top of each custard until the sugar melts and caramelizes. Move the torch constantly so the sugar doesn't burn in any one area, though a few darker patches are okay (and delicious).

Return to the refrigerator if not serving the crème brûlées right away. Serve within 1 hour, or the crunchy tops will start to soften.

« Real Canadian Poutine and a Trip to Ottawa and Montreal
Cooking with Kids: 3 Ingredient, No Bake Cereal Bars for Peanut Butter and Honey Lovers »